I’ve titled this blog erniegoes to keep track of where I (Ernie) have gone since moving to Hong Kong, but, since 2012, it has been as much about where Ashley goes too. She’s been the silent companion on erniegoes, appearing in photos and interpreted in my writings, but her own experiences could fill a million stories. On our next trip though, I got a glimpse not so much of where Ashley goes, but where Ashley is from. In December of 2014, a week after our Bangkok weekend, we booked tickets to Taipei for the end of the month with a travel group that has appeared extensively in previous erniegoes entries: Derek (Nepal, Shanghai, Seoul, Taiwan Bike Trip 1 & 2, Kuching, Kenting), Sharon (Shanghai, Yunnan, Seoul, Switzerland & Germany, Austria, France) Dawn (Shanghai, Taiwan), Sam (Shanghai), and Grace (Kuching). For Ashley and I, this would be our first time together in the city where Ashley was born and raised, and I was looking forward to seeing some of her past in the rainy streets of the Formosan capital. 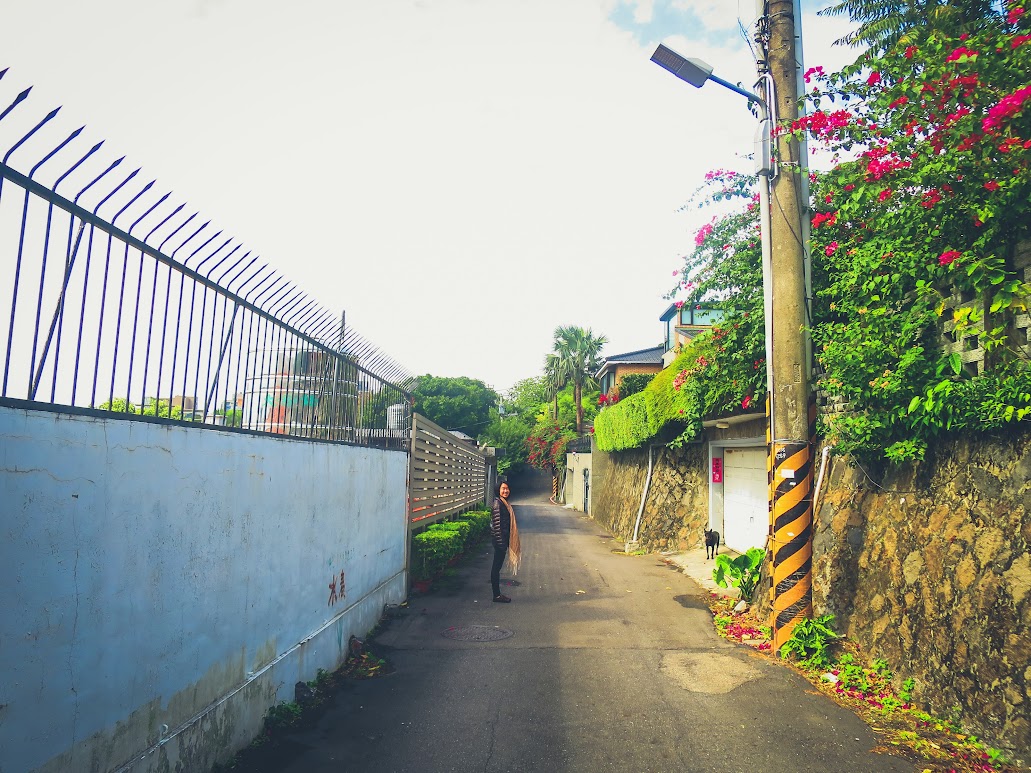 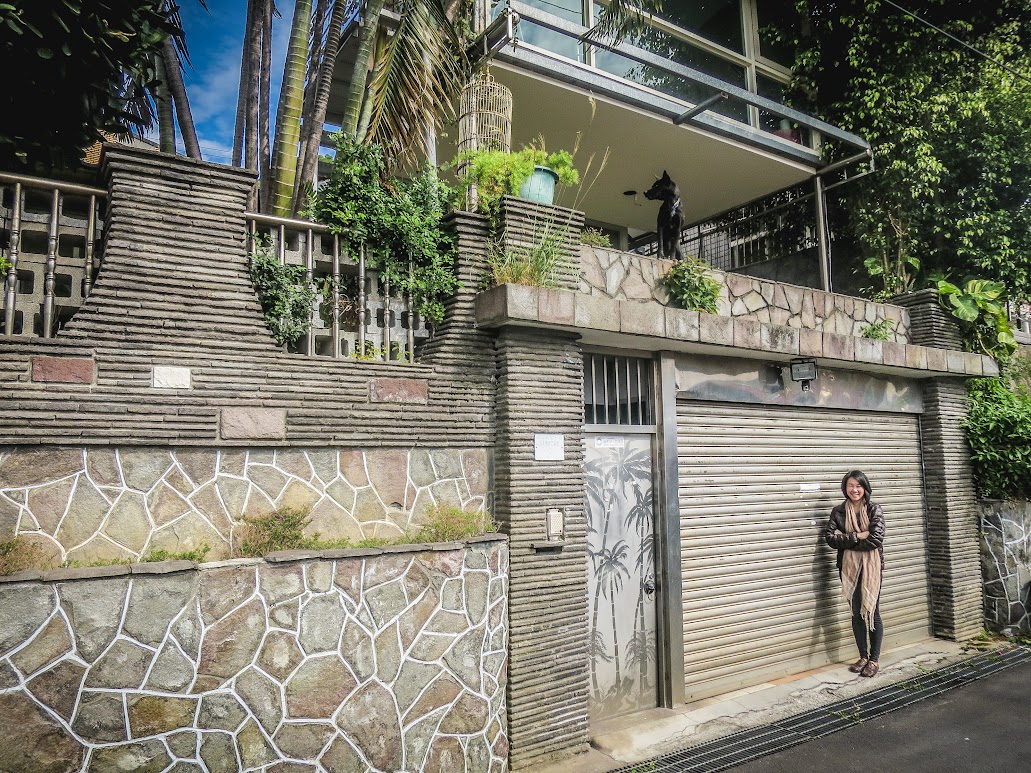 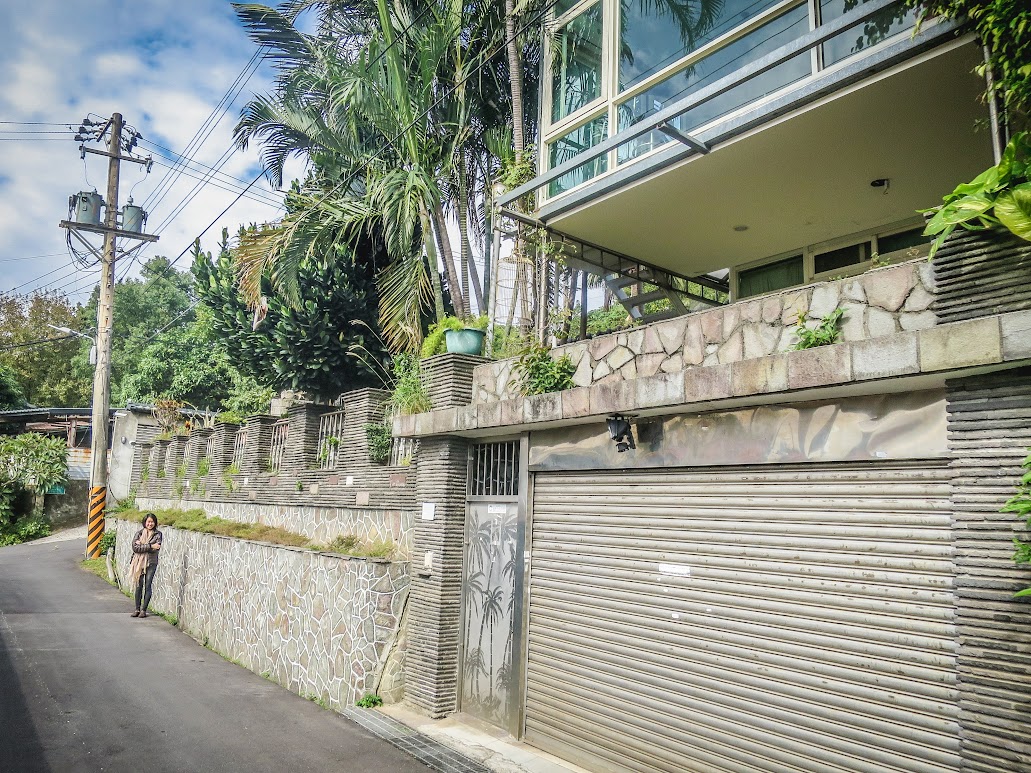 The two of us arrived earlier than the rest of the group, so we set out to find Ashley’s childhood home in the hills of Tianmu, a somewhat expat district in northern Taipei. Ashley’s parents are originally from Hong Kong, but they moved to Taiwan in the mid-1980s when her father was relocated by his employer, Samsonite. Not long after the move, Ashley was born, and her parents drove extremely carefully and slowly back to their house in Tianmu, the same house we were looking for that December morning. As we sat in the back of the cab, snaking its way through the steep hillside lanes, Ashley would point at homes and signposts that jogged long-forgotten memories. When the cab could go no further, we made our way on foot, past neighbourhoods that reminded me a bit of Seoul, until we reached a section that looked somewhat familiar to Ashley. After confirming the exact street with her family through Whatsapp, we finally laid eyes on the place she called home for the first seven years of her life. 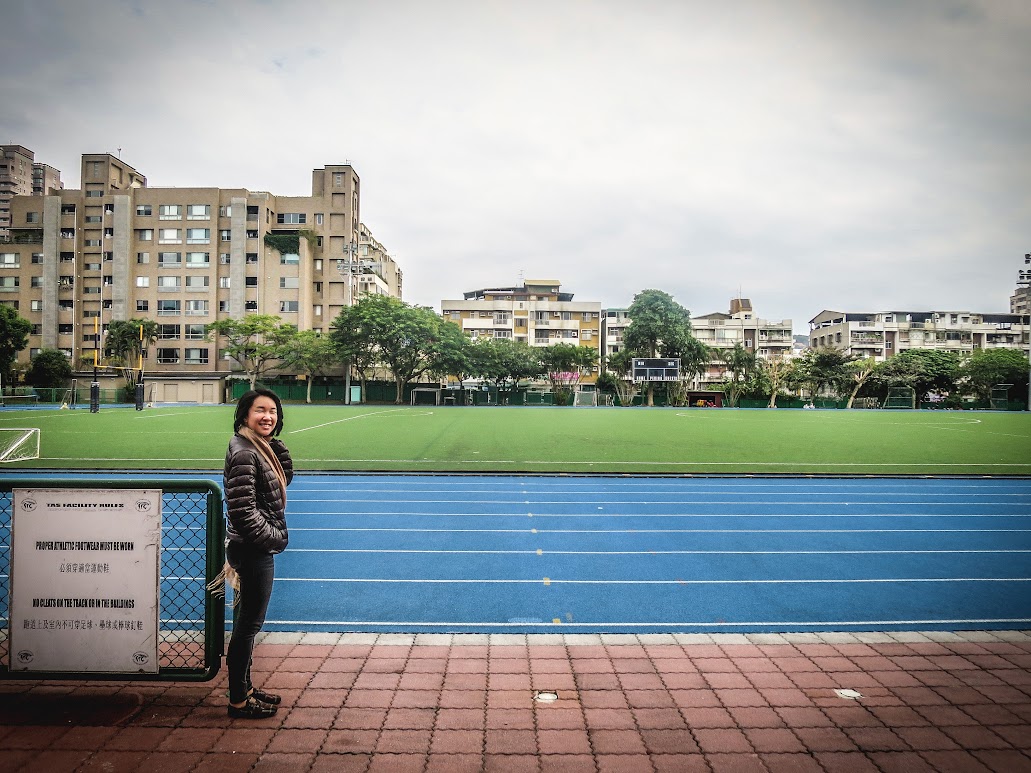 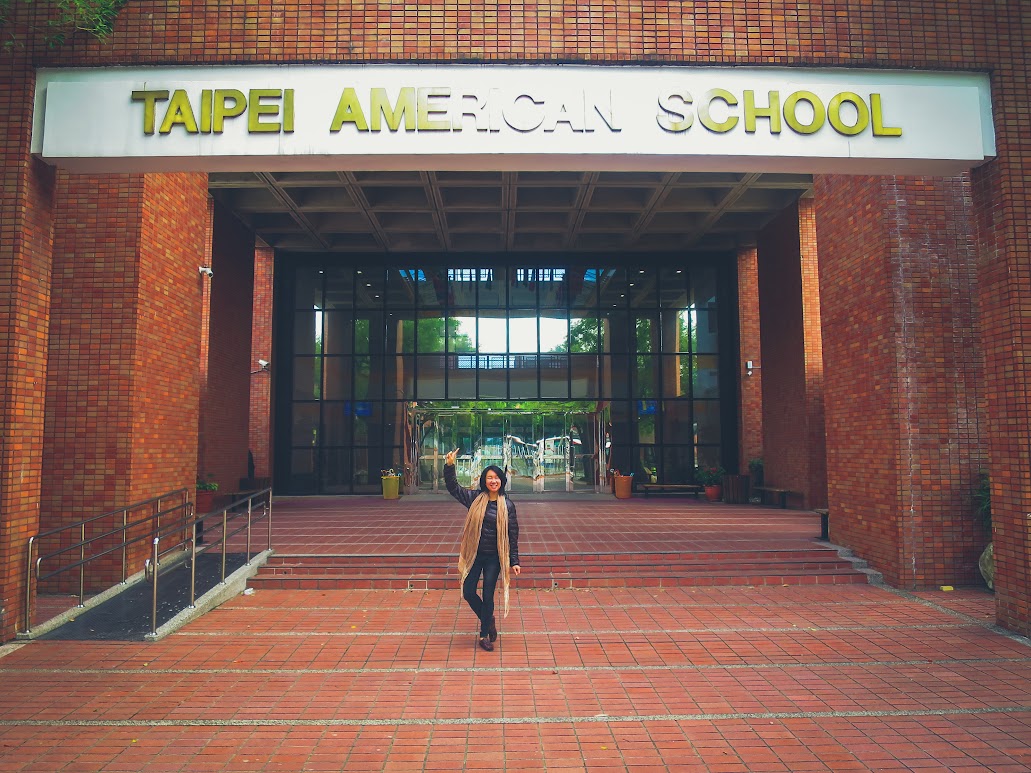 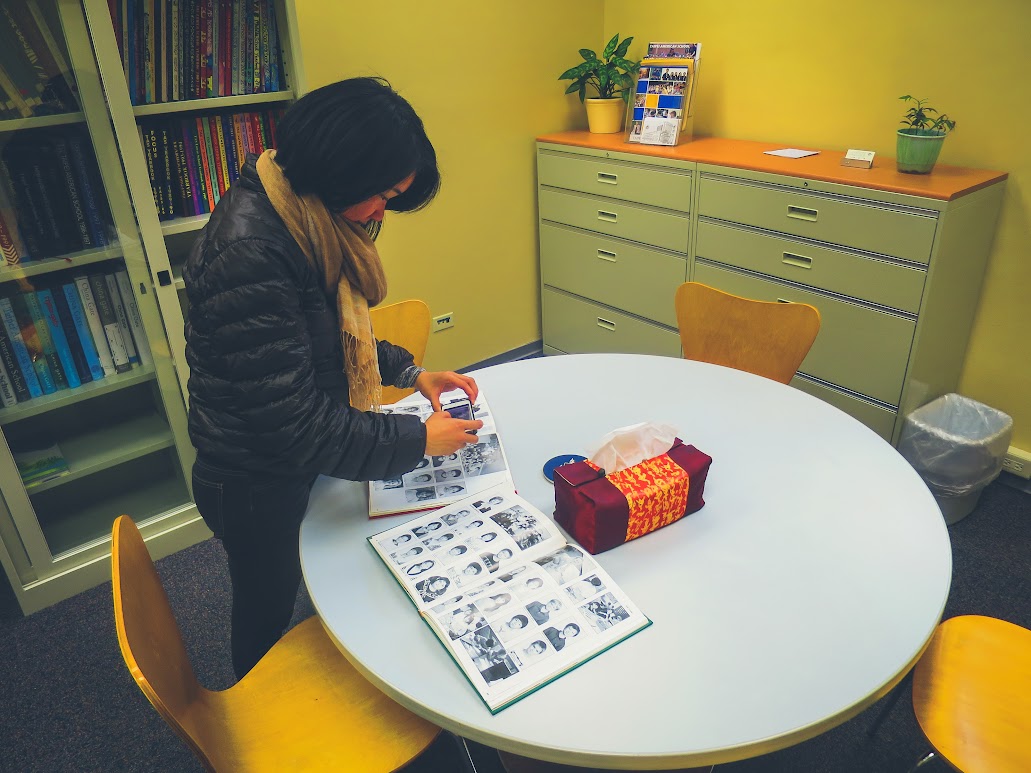 During her family’s time on the other side of the Taiwan Strait, they made fast friends within the growing Hong Kong expat community. Not surprisingly, many of those connections were made through their children, most of whom were enrolled together in the Taipei American School (TAS), a private international institution that had once educated the families of American military personnel. Ashley attended TAS until her family moved to Denver in the early 1990s, and as we walked around the school grounds and down familiar hallways lined with lockers, she reminisced on her earliest years of education in Taipei. There was the room upstairs where she had her piano lessons, the outdoor track where she broke her collarbone, and the parking lot where she waited for the school bus to take her home, all of which described the familiar and unfamiliar parts of Ashley’s life and put into context her family’s stories of her youth. As an added bonus, TAS recognized her as an alumna, granting her various privileges that might come in handy, should we ever end up in Taipei in the future. 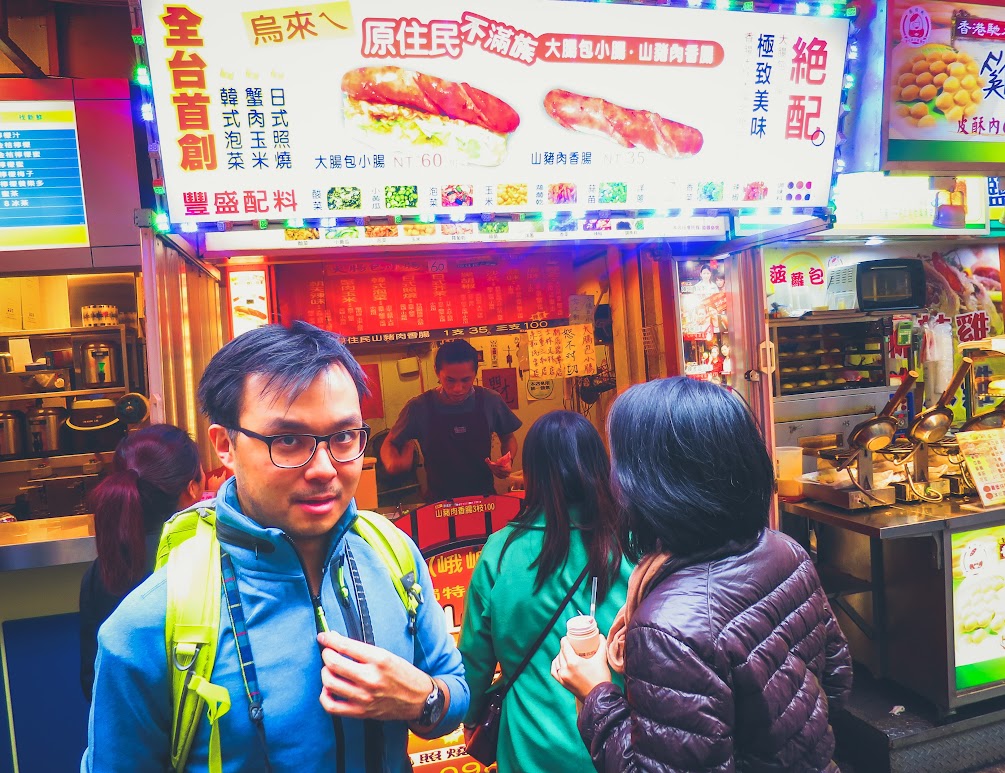 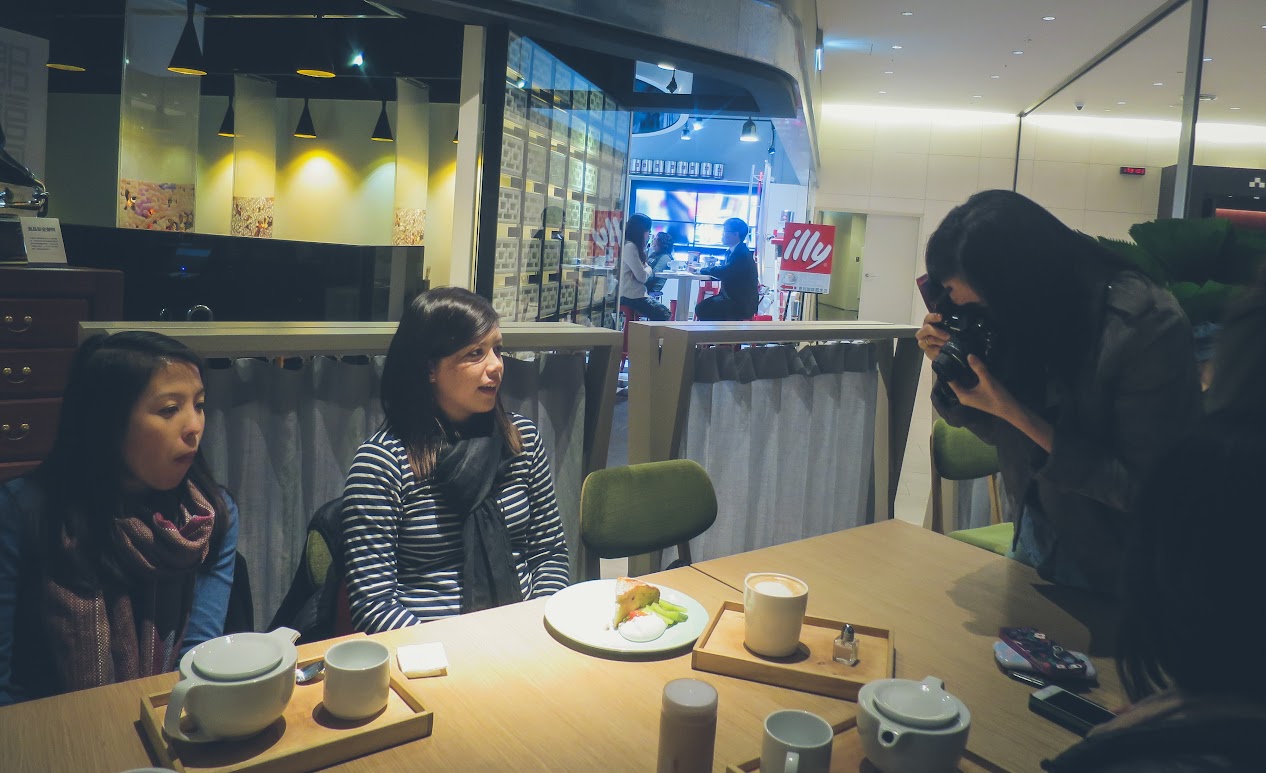 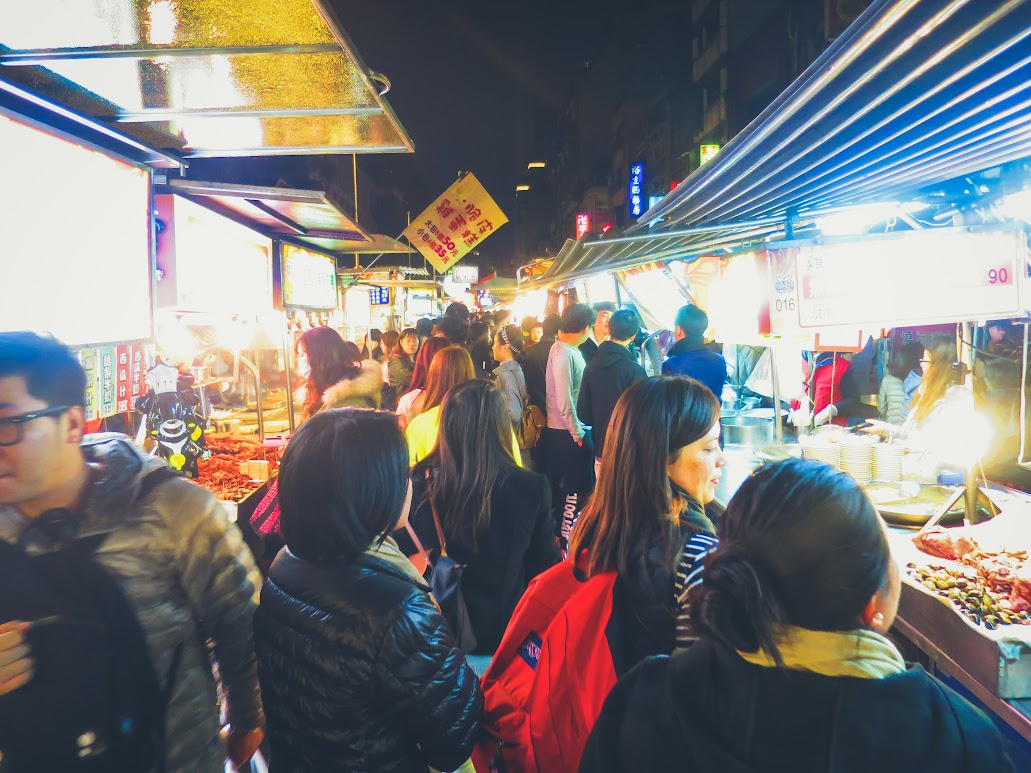 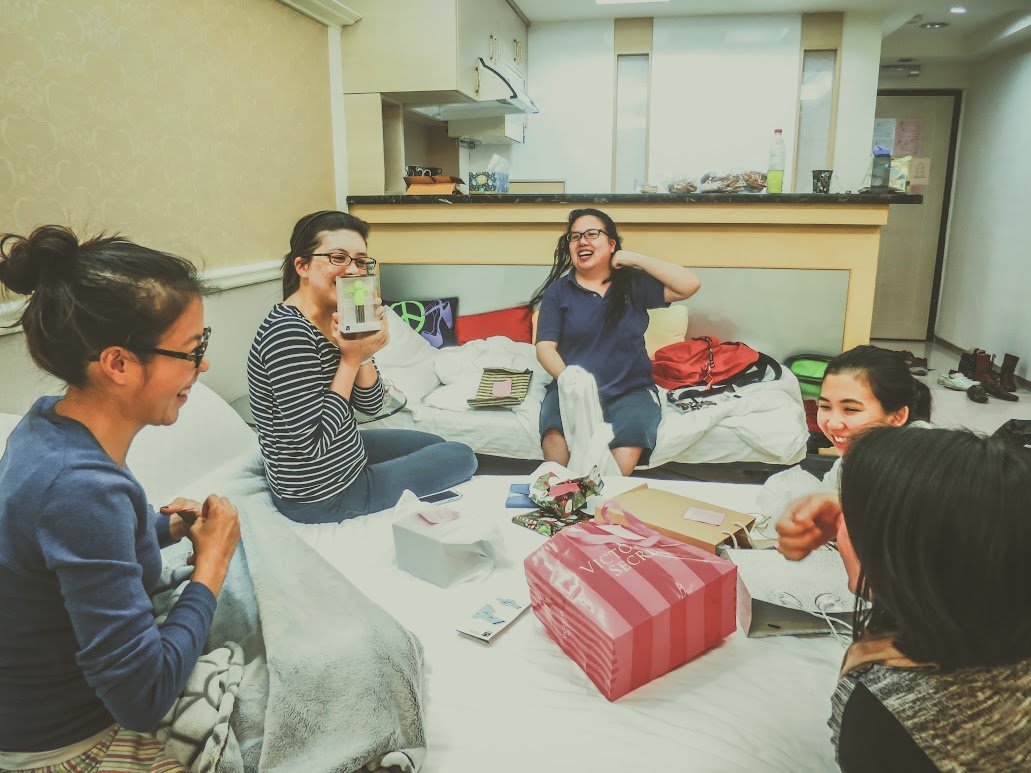 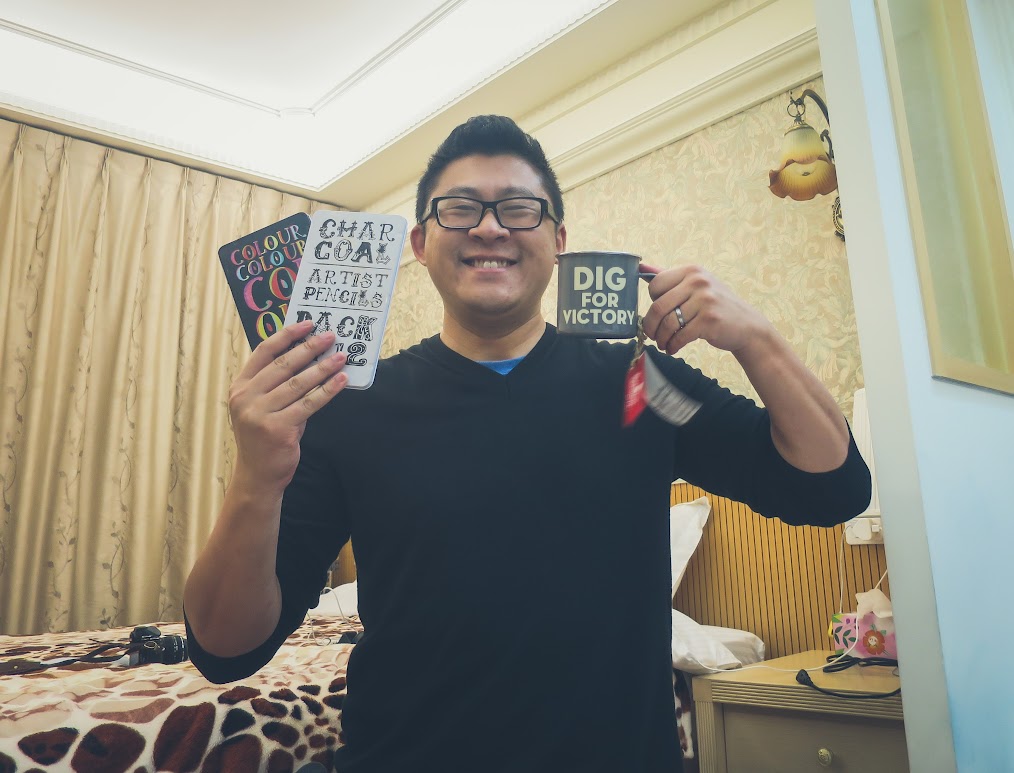 The other members of our travel group arrived in Taipei as we were wrapping up our trip down Tianmu memory lane, and we met up with them just as the weather took a turn for the worse. The storm clouds drove us into the dry refuge of the Eslite Spectrum, a shopping mall in the central Xinyi District that emphasizes products with a certain cultural or artistic aesthetic. That sort of thing honestly makes my eyes glaze over though, especially on a rainy day, and I only remember the delicious tea we had in the basement. The weather cleared up enough in the evening for us to walk through one of Taipei’s many night markets, before we retreated to the girls’ Airbnb apartment to do a little Christmas gift exchange. I’m fairly confident in my inability to pick out appropriate gifts, though I think I made out pretty well with mine. 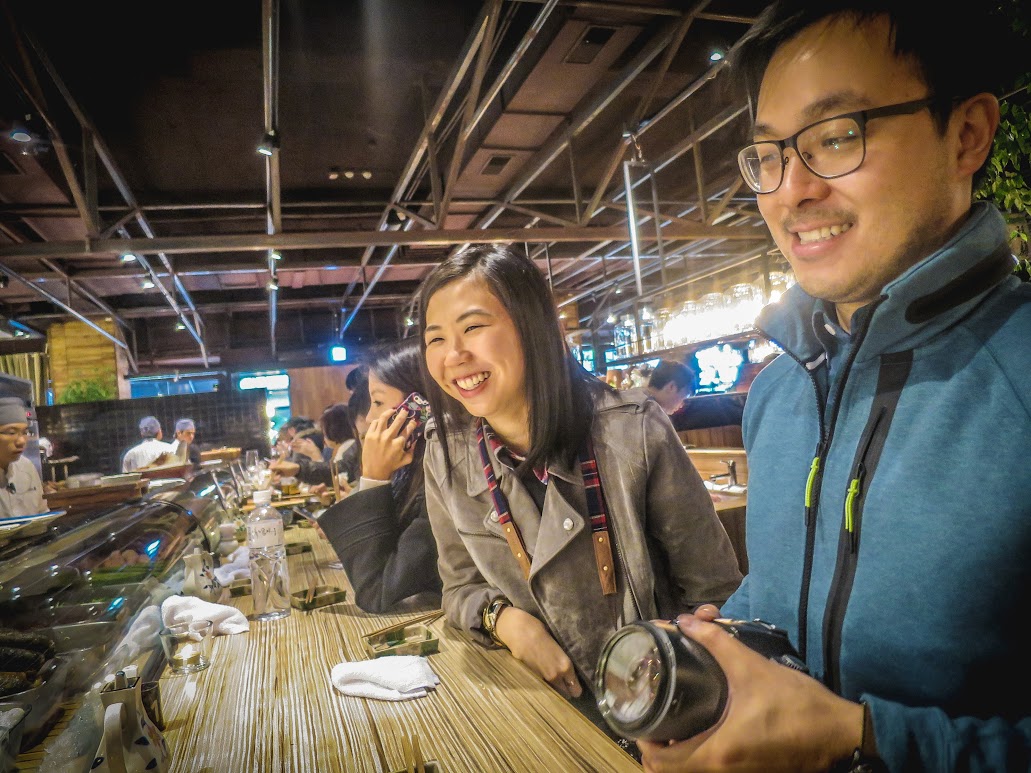 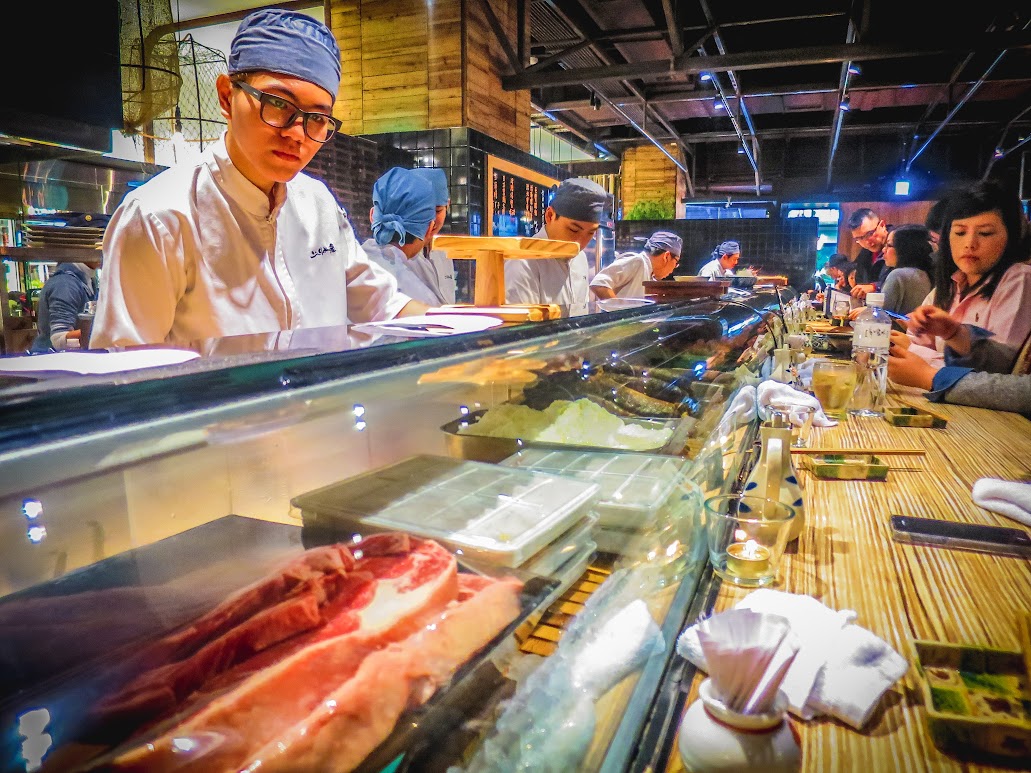 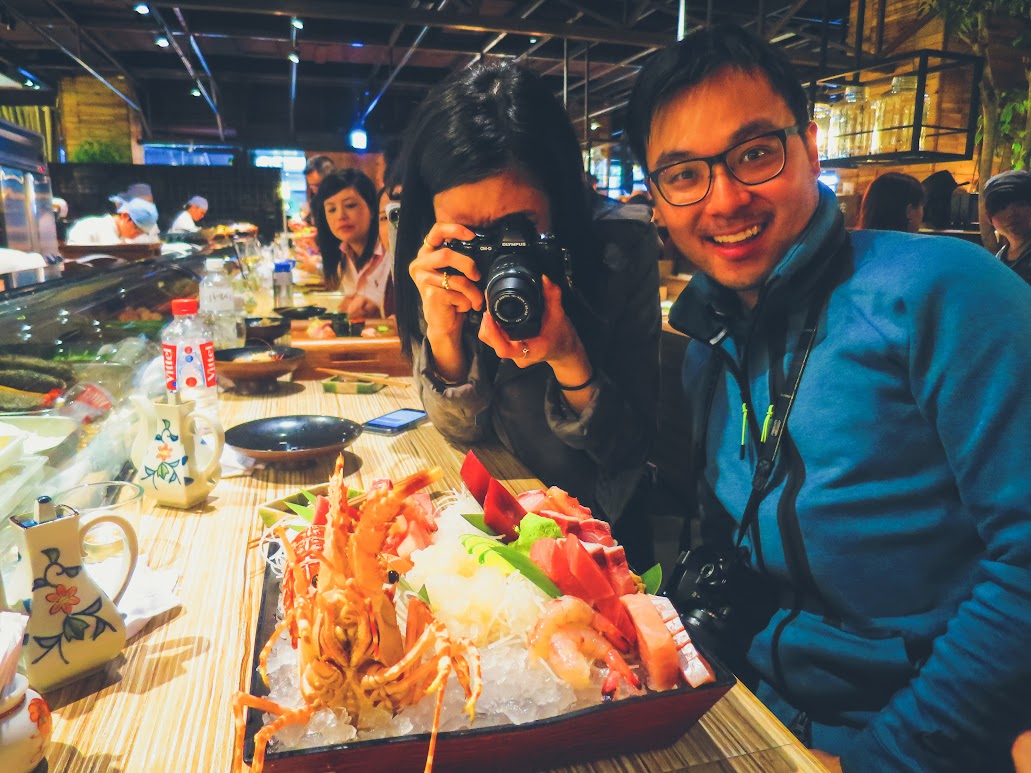 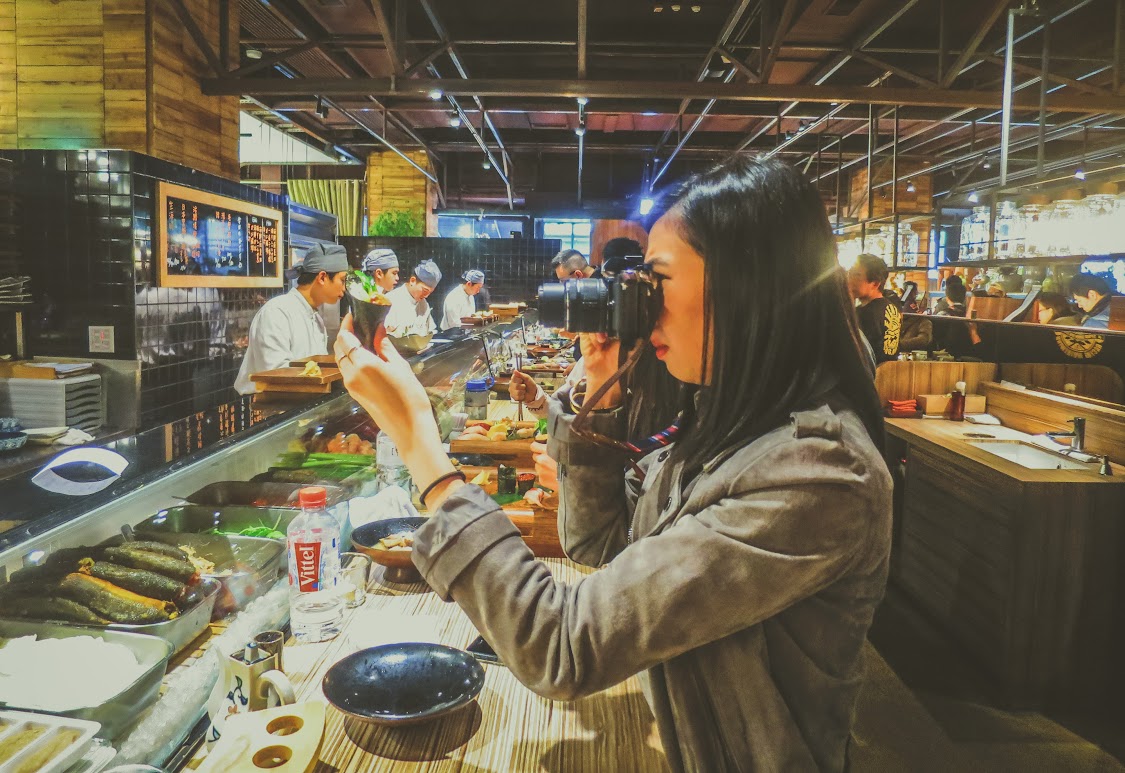 As the next day dawned, the morning skies remained grey and gloomy, and I reminded myself that I probably preferred cool and rainy to freezing and blizzards. Our little group hopped into a pair of cabs and headed for the Zhongshan District, where the Taipei Fish Market was located. It had recently been renovated into a modern fish and seafood market, and it had a reputation for serving decent sushi. The shopping aisles and sushi bars were full when we arrived, and we picked up numbered tickets to reserve our spot in the growing line. After what must have been over an hour of wandering and waiting, word spread that our number was coming up, and we slowly gathered in anticipation of our much-longed-for meal. I don’t know if I can say that it was worth the wait, especially in light of more memorable sushi meals I’ve had since this trip, but at the time, we definitely thought so.

In the evening, I met up with Yun Ping, a university friend and Taroko Gorge hiking partner, and it was the first time we’d seen each other since 2011, when I was in Taipei with Dawn and a few other friends. No matter how much time had passed though, it’s always good to see an old friend, and I was glad to be able to introduce him to Ashley as well. We spent that night filling each other in on the recent events of our lives, before the coffee shop kicked us out and we said our goodbyes again. Yun Ping is not very big on social media, and I have no idea what he’s up to these days, but I always make sure to find a spare moment with him whenever I’m in Taipei. 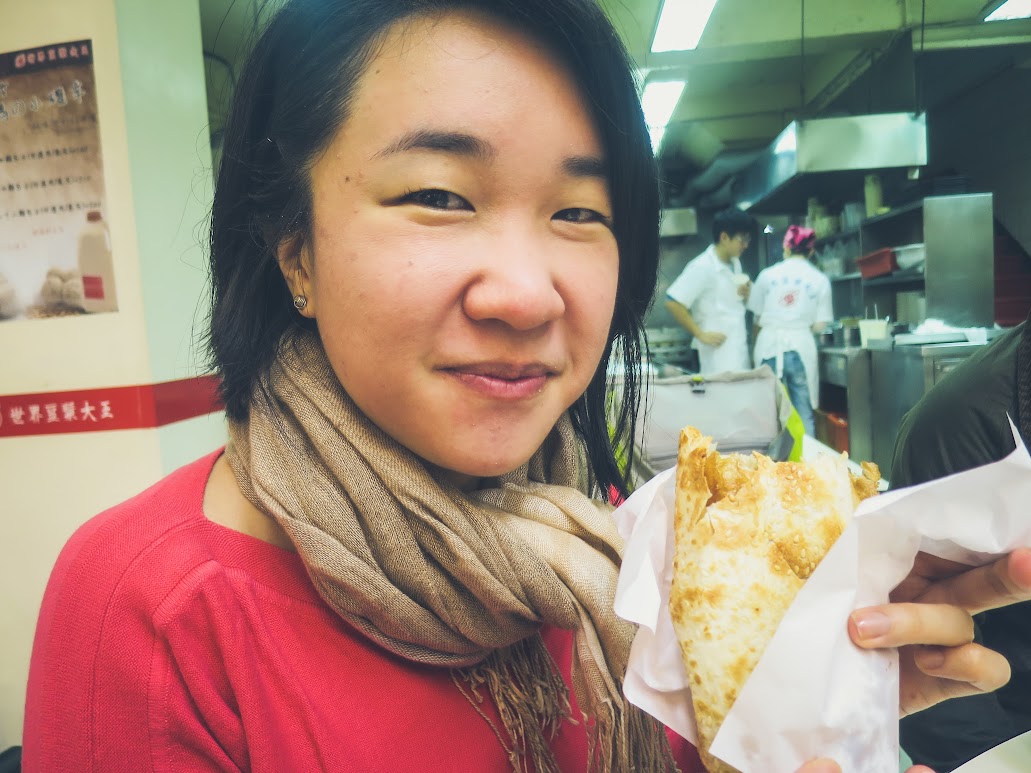 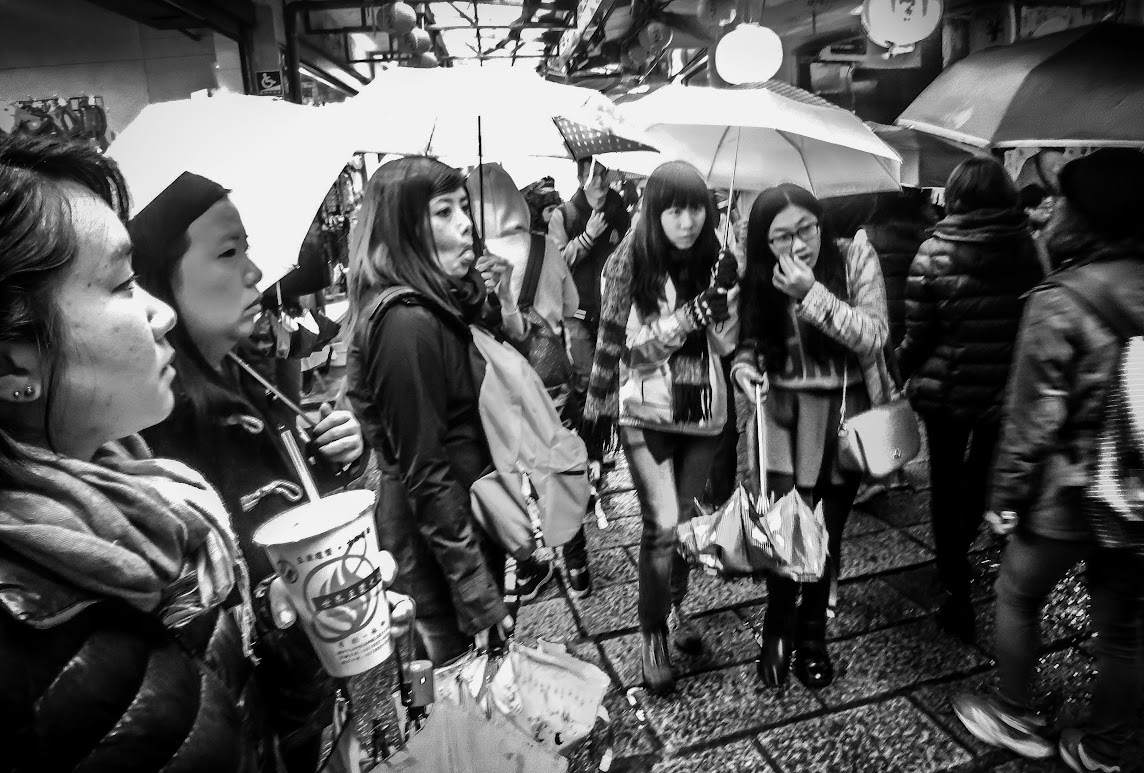 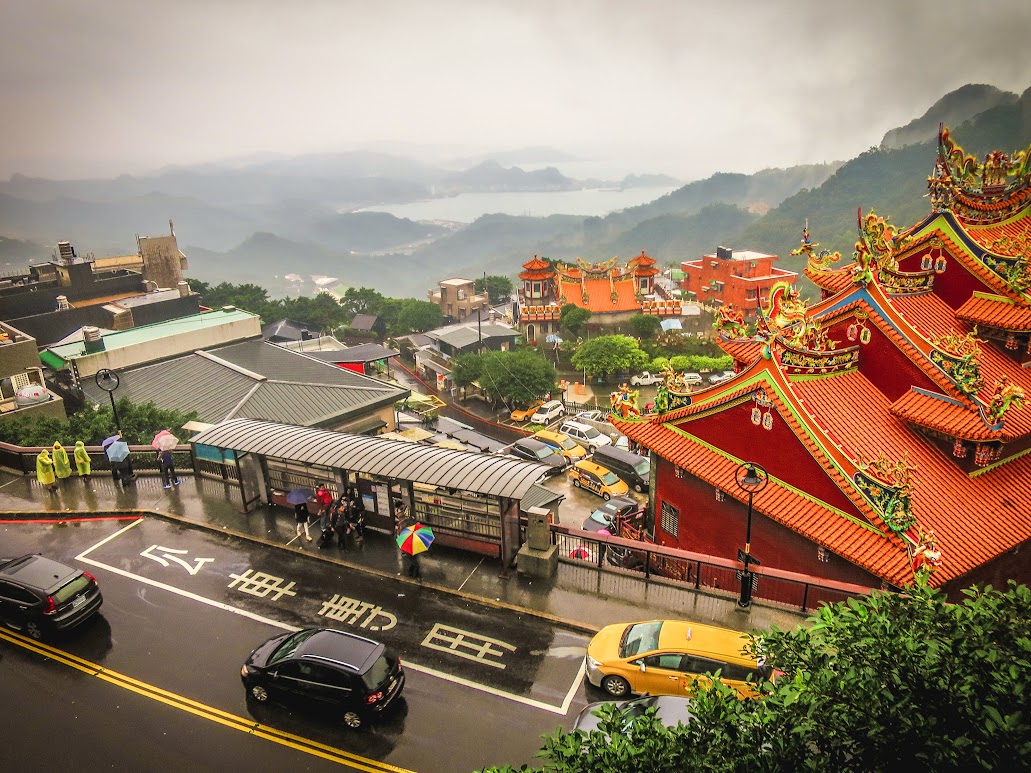 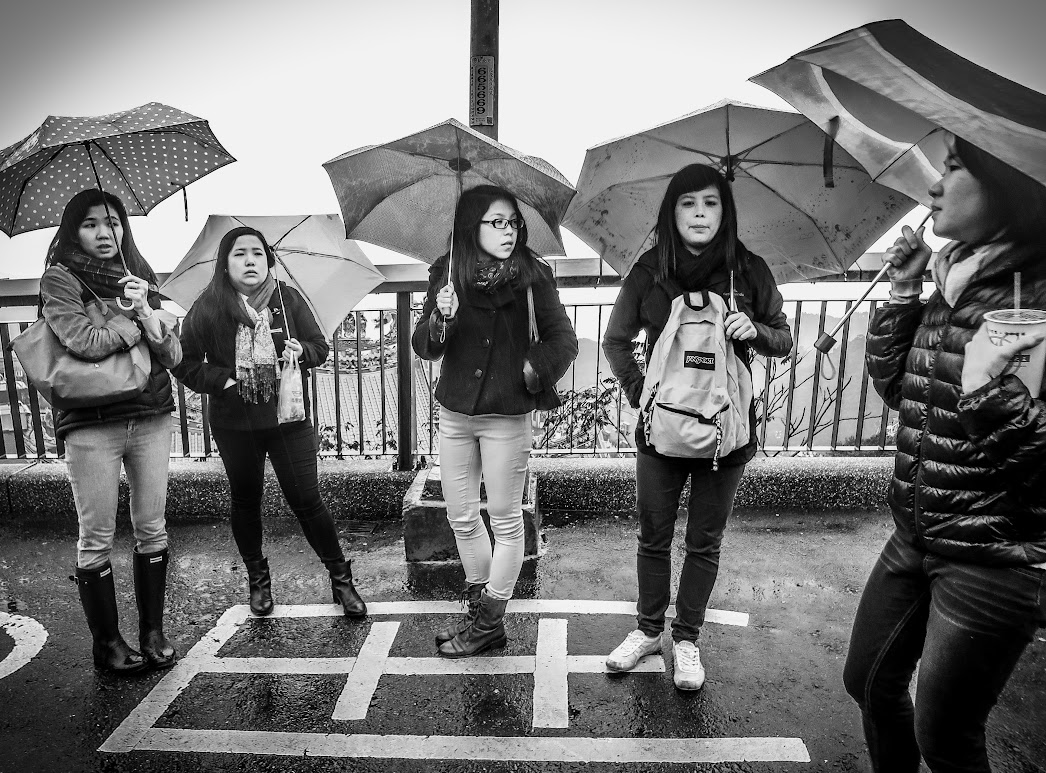 Derek was our resident Taipei expert, and during his whole time in Hong Kong he never wasted an opportunity to sing its praises. Having grown up in a Taiwanese-American family in New Jersey, he spent summers abroad in Taipei, familiarizing himself with the best shops and restaurants while ostensibly soaking in his home culture. I’m a little more indifferent towards his spiritual hometown, but I am unashamedly a fan of how they do breakfast, and the following morning he took us to a Taiwanese breakfast shop by his hotel. As we munched on delicious shao bing (baked wheat cake) and warmed our stomachs with hot bowls of soybean milk, we discussed our itinerary for the day. Our first stop would be the mountainside village of Jiufen, a place I went into a little more detail with in an earlier Taipei trip post, but the rain and the crowds were just too much. Walking uphill and downhill on slippery stone paths while avoiding umbrellas and unruly tourists put a definite damper on things. After a short while, we piled back into our hired van and asked the driver to take us to the old street of Shifen instead. 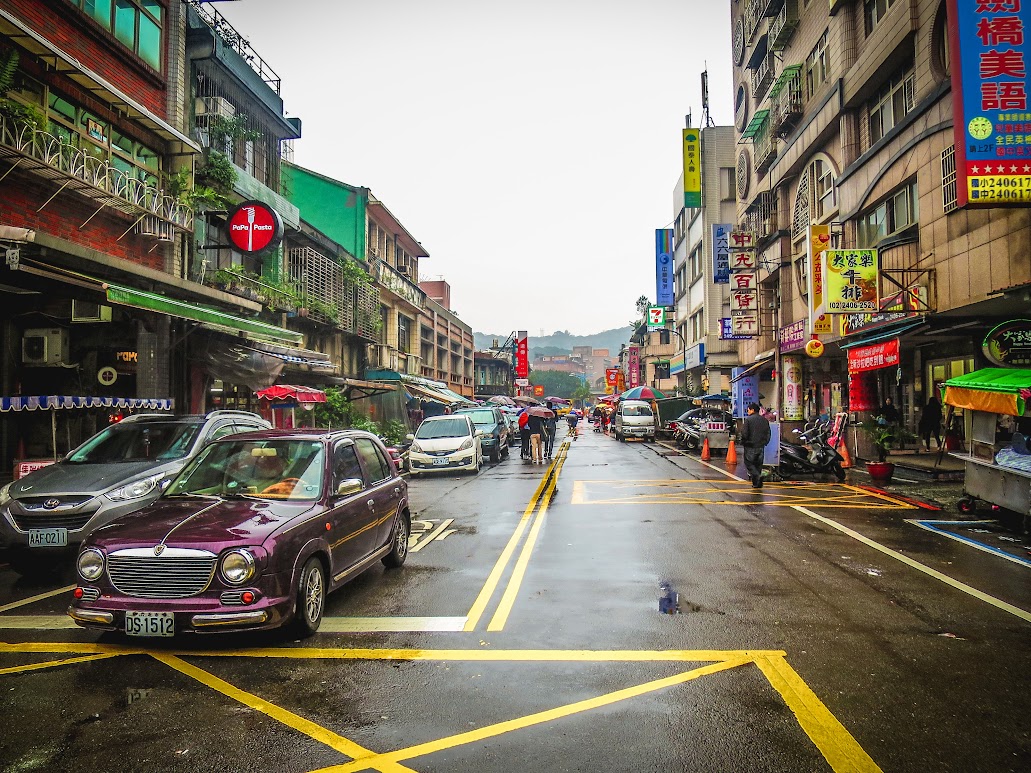 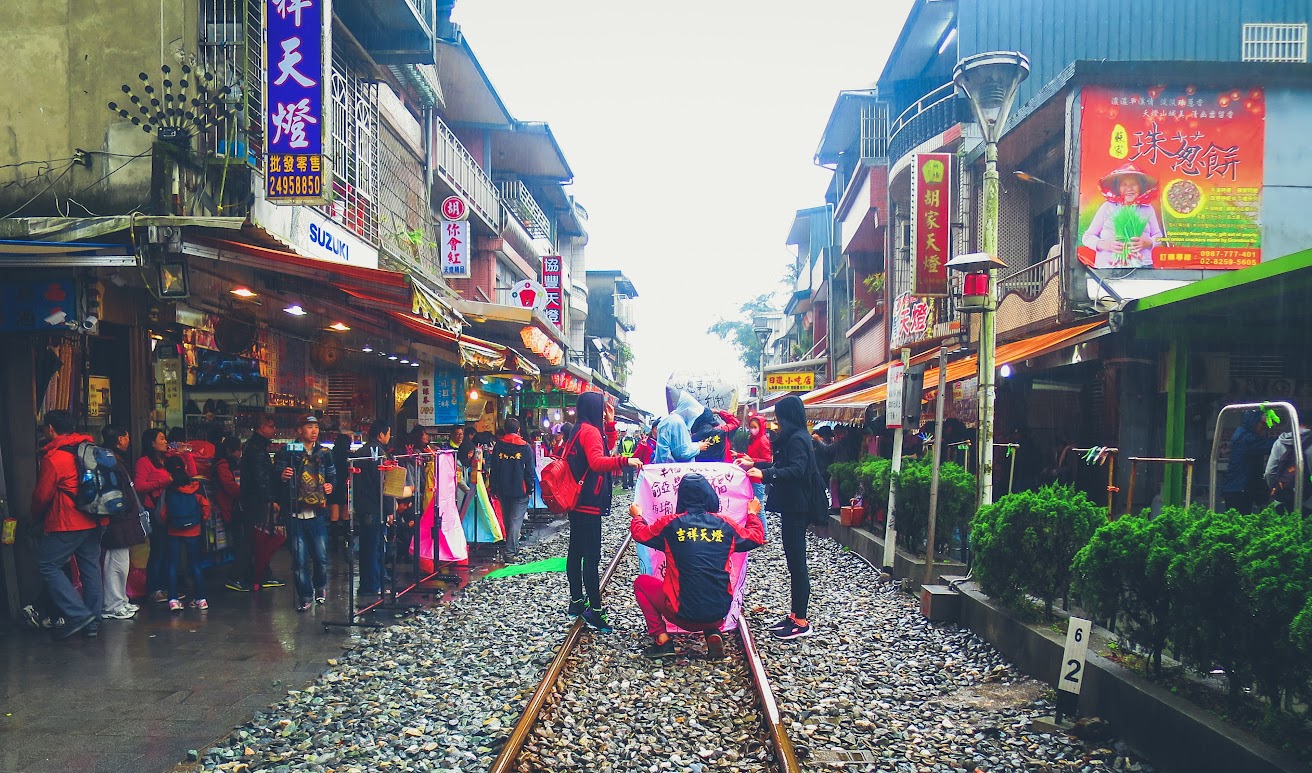 Shifen is associated with Taiwan’s coal-mining industry, and the famous tracks that bisect the street were built for the trains that transported coal around the city. The neighbourhood had a sleepy feel to it, perhaps exacerbated by the rainy weather, but the tracks were still very much in use, and visitors needed to watch for incoming trains. On either side of the tracks sat small shops selling local snacks and drinks, and if it wasn’t for the rain, I’m sure it would have all been quite charming. Unfortunately, the rain continued in Shifen, and we warmed up in the back of a tea shop, sipping on hot drinks and willing the grey skies above us to disappear. Finally, one of us suggested that we pass the time by participating in another one of Shifen’s novelties: painting and releasing a sky lantern. 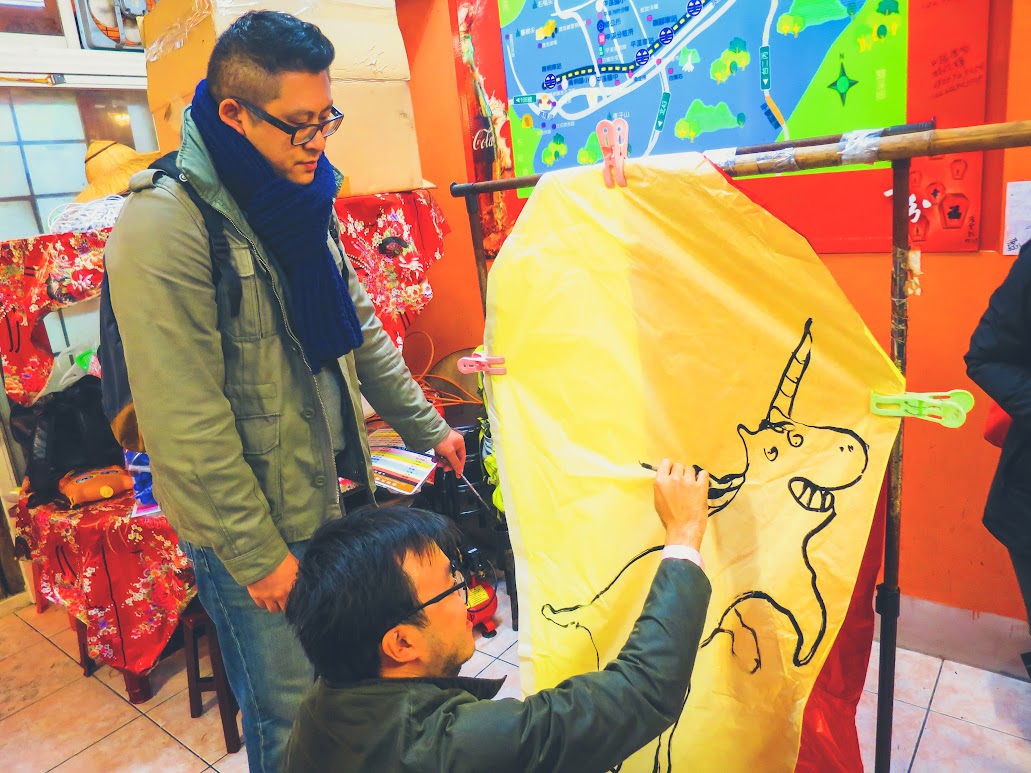 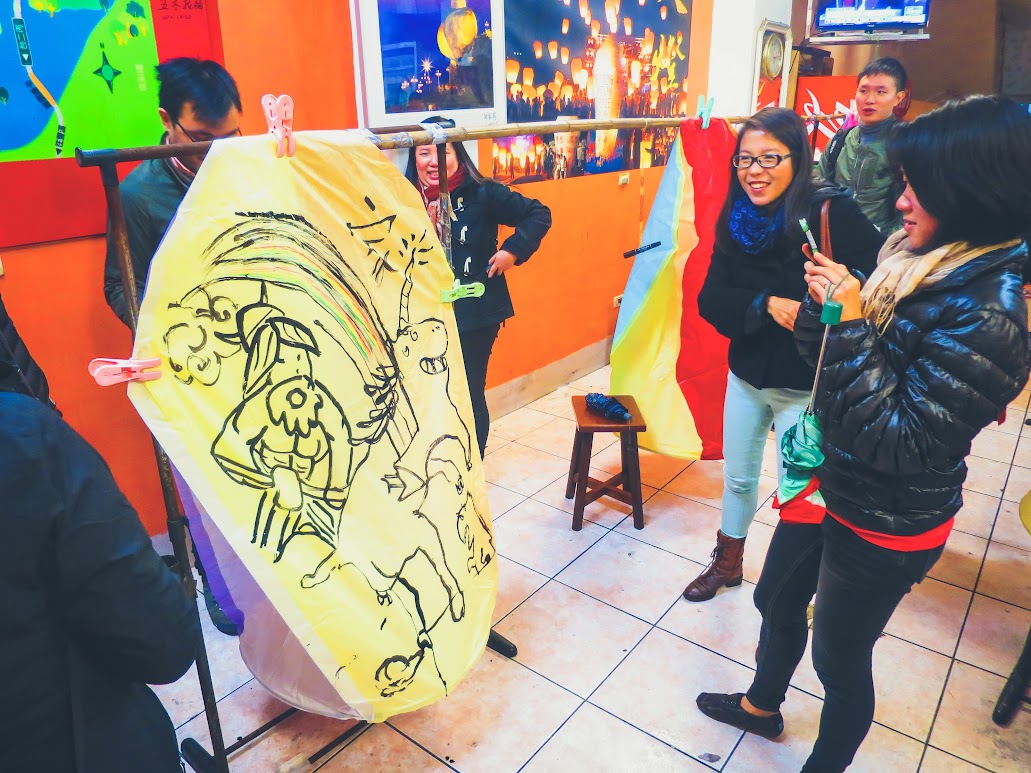 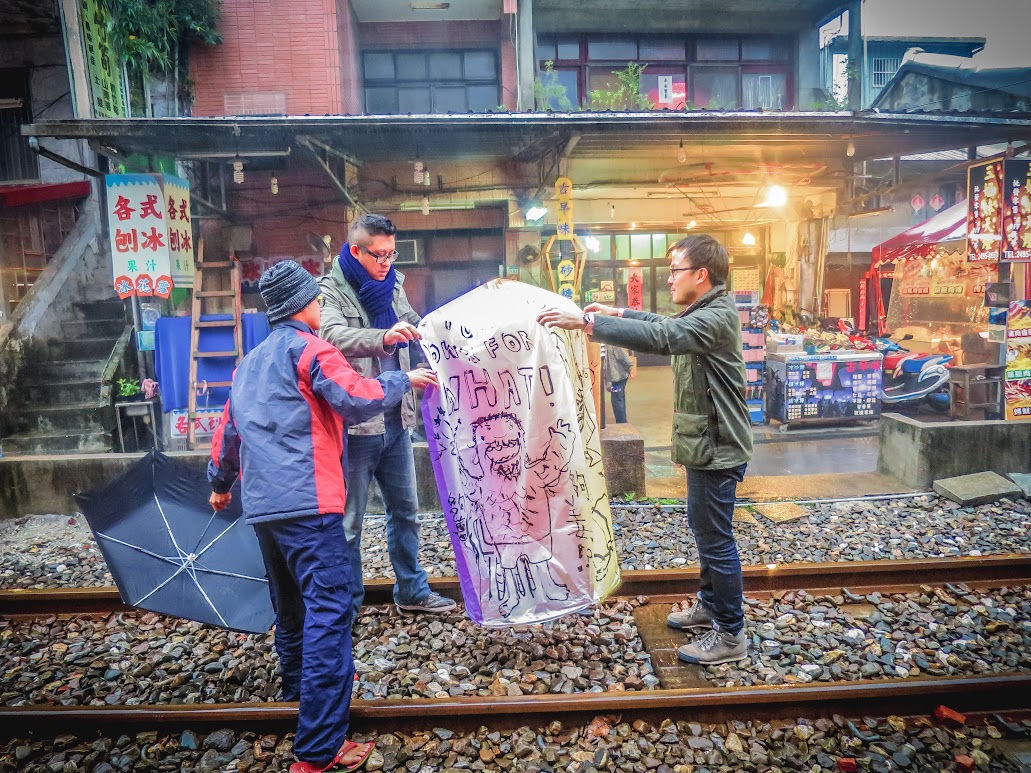 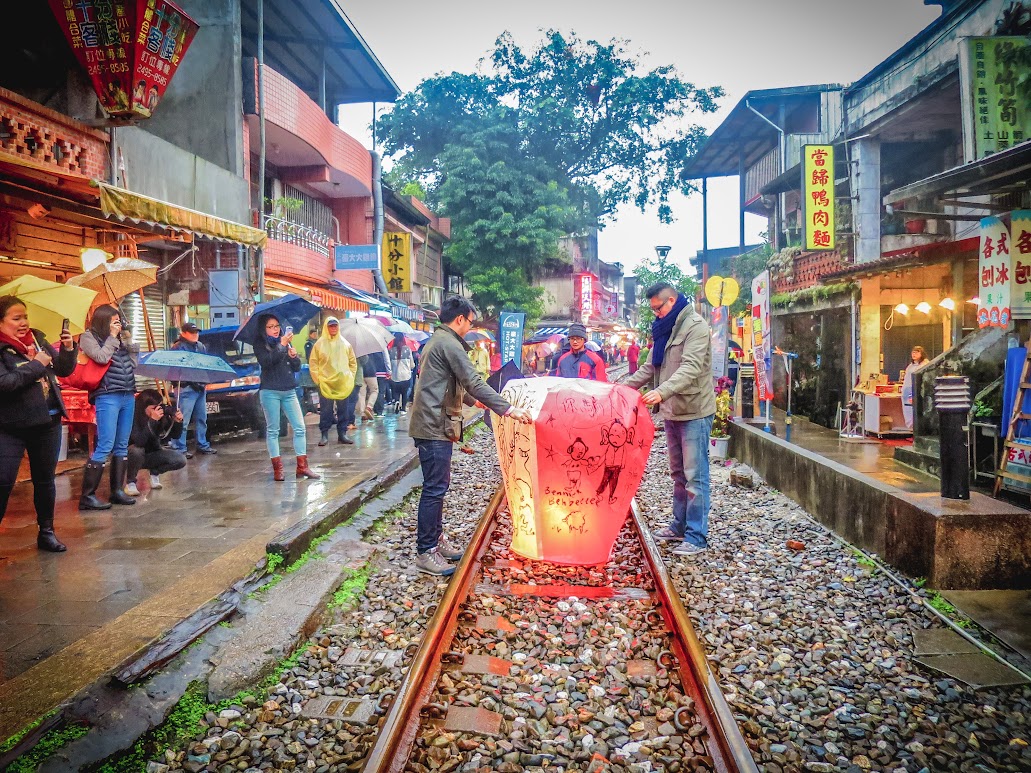 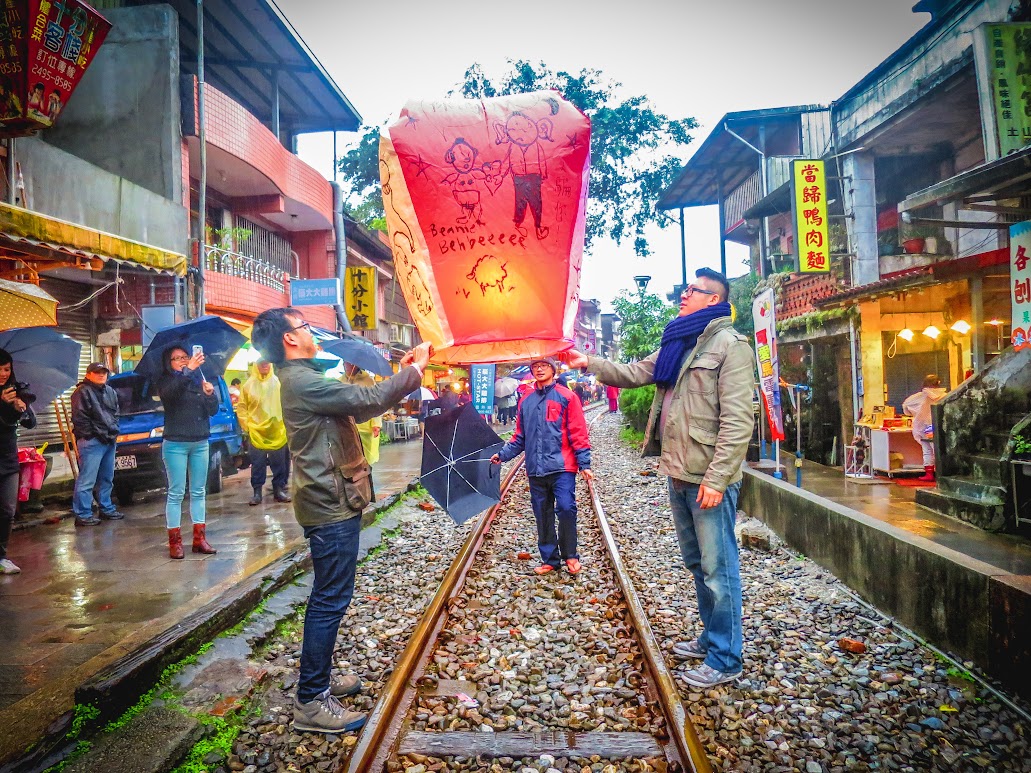 Originally used by villagers and coal miners to send signals and messages to those further down the track or up the hills, the tradition has persisted and morphed into a general wish for good luck and fortune. Lantern shops can be found on both sides of the train tracks, and we just walked into the closest one. There’s no oversight on what is allowed and not allowed to be portrayed on the lanterns, so our particular wish for good fortune had no coherent message for the heavens. Once we had completed our confusing masterpiece, Derek and I took it out to the train tracks and gently released our sky lantern, watching as it floated slowly above the village roofs and over the misty green hills. 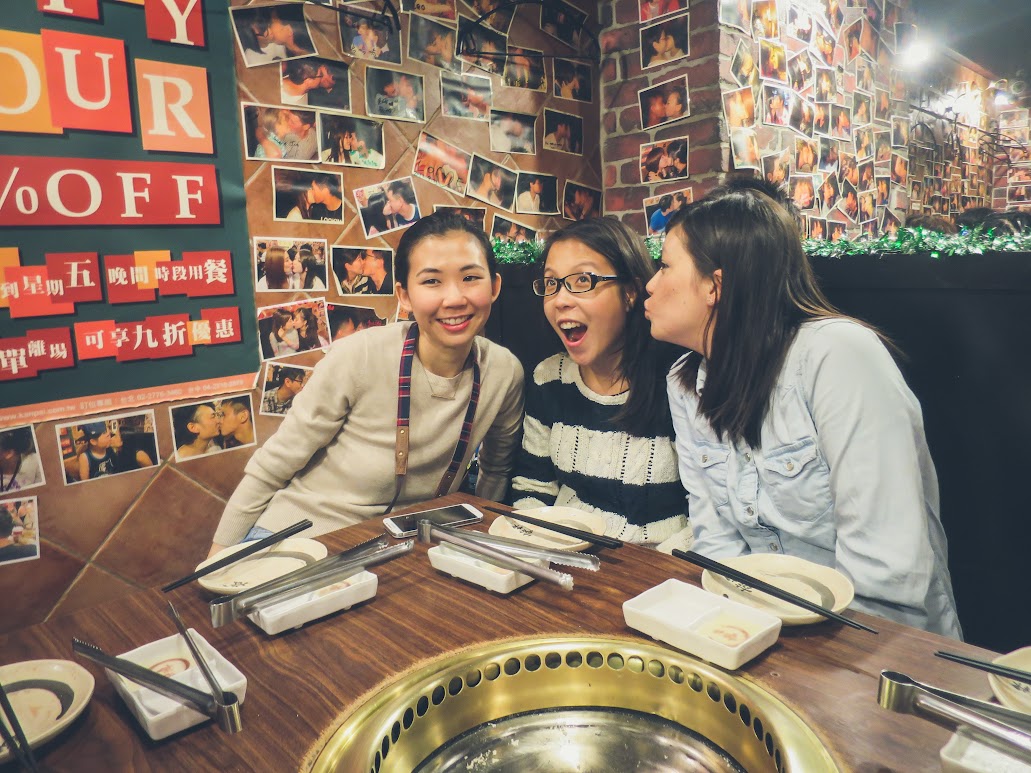 On our last evening in Taipei, we had dinner at a barbecue restaurant with quite a unique atmosphere. There was a lot of customer participation throughout the night, whether it was kissing for a 30 seconds to win a free plate of beef, or a cringe-worthy public proposal that landed with a dull thud. Another customer, a friend of the not-to-be fiancé, re-used the proposal flowers and publicly presented it as a gift to his own partner. This seemed cruel, but then again, why waste flowers? 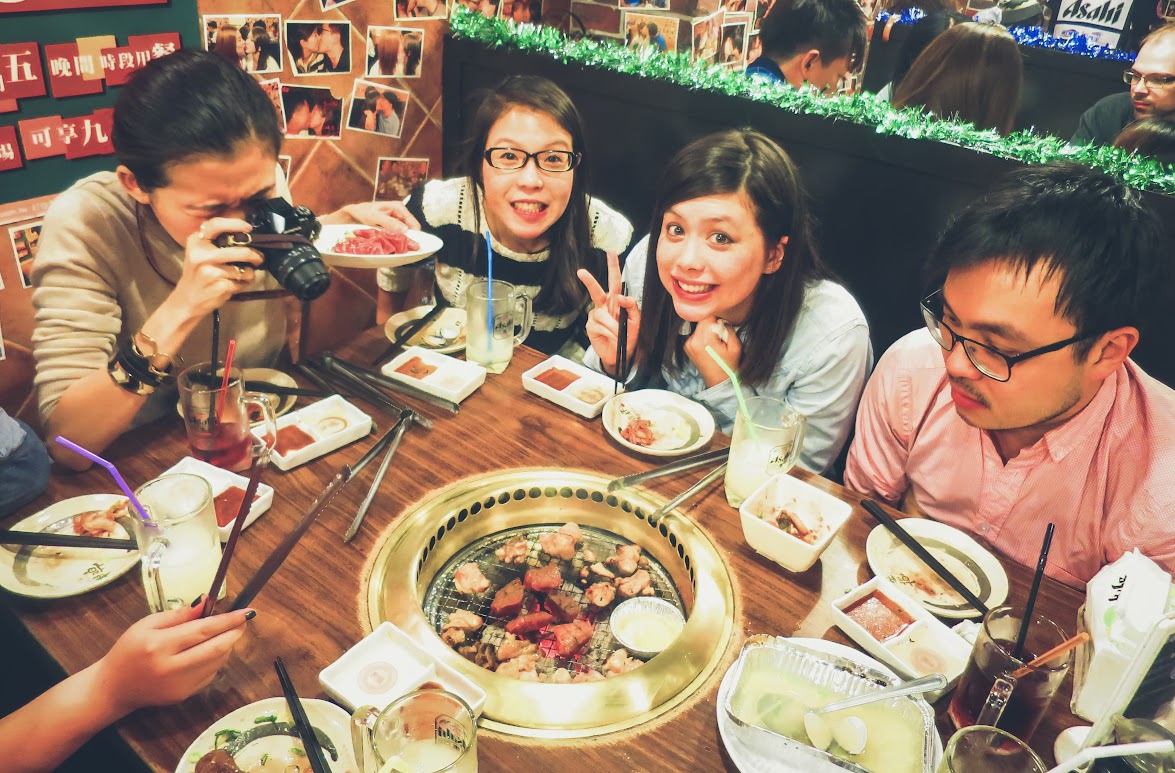 Despite the rain, the trip had its fair share of good memories, especially since it was a sort of goodbye for a few in the group. Dawn would soon be relocating within her company to their office in New York City, Sam had found a new job with a different airline in Tokyo, Sharon was doing a semester abroad for her MBA in London, and Derek was making very iffy plans about quitting his job in Hong Kong and moving back to New Jersey. It would take him a few more months yet to actually go through with it, and we managed to squeeze in one more trip with him the following February. As for Dawn and Sam, we would see them next summer in Vancouver of all places, and Derek would meet us there too. We returned to Hong Kong before the New Year, ringing it in at our apartment with friends and loved ones, but, before we knew it, it was the beginning of February, and we needed to dig up our little-used winter gear once again. 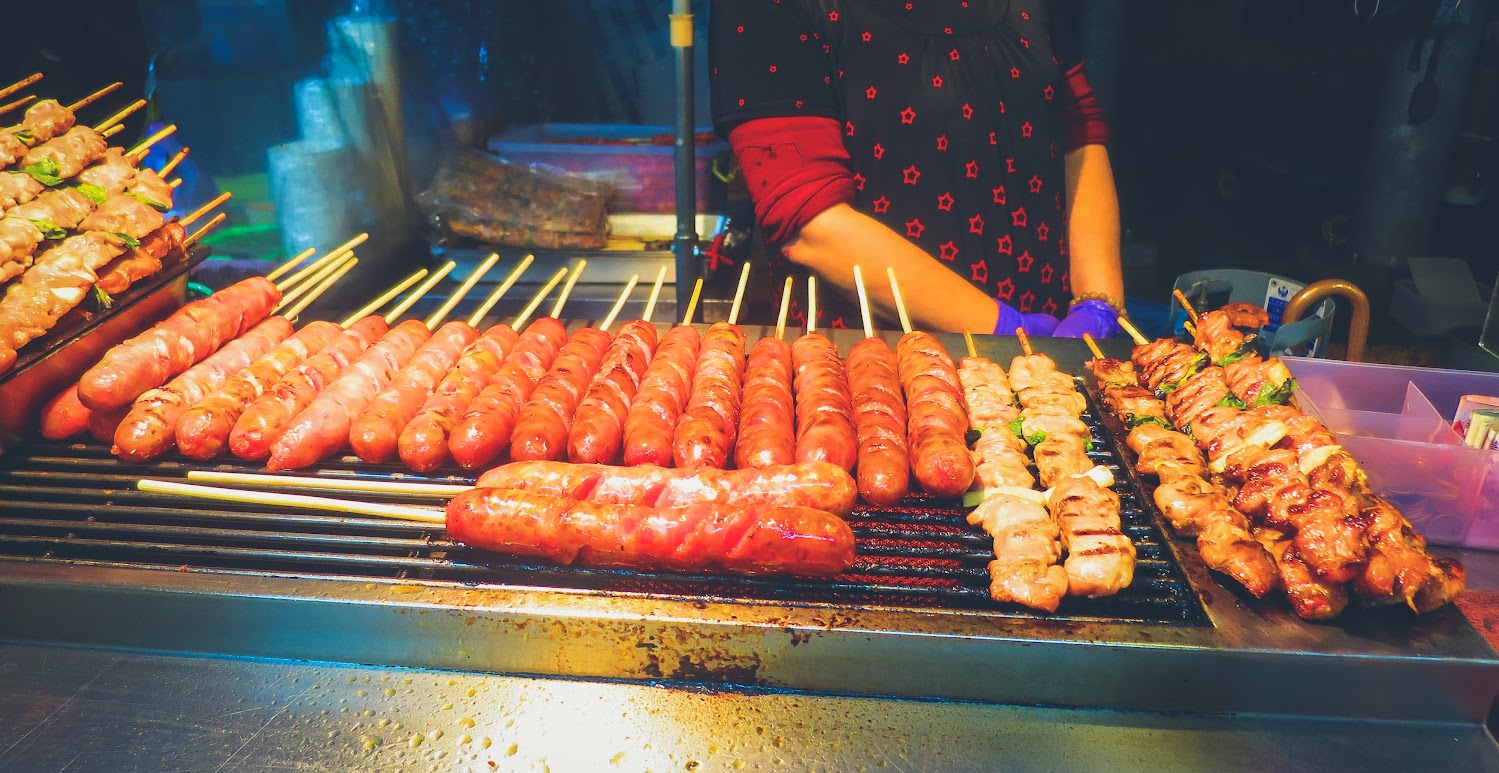