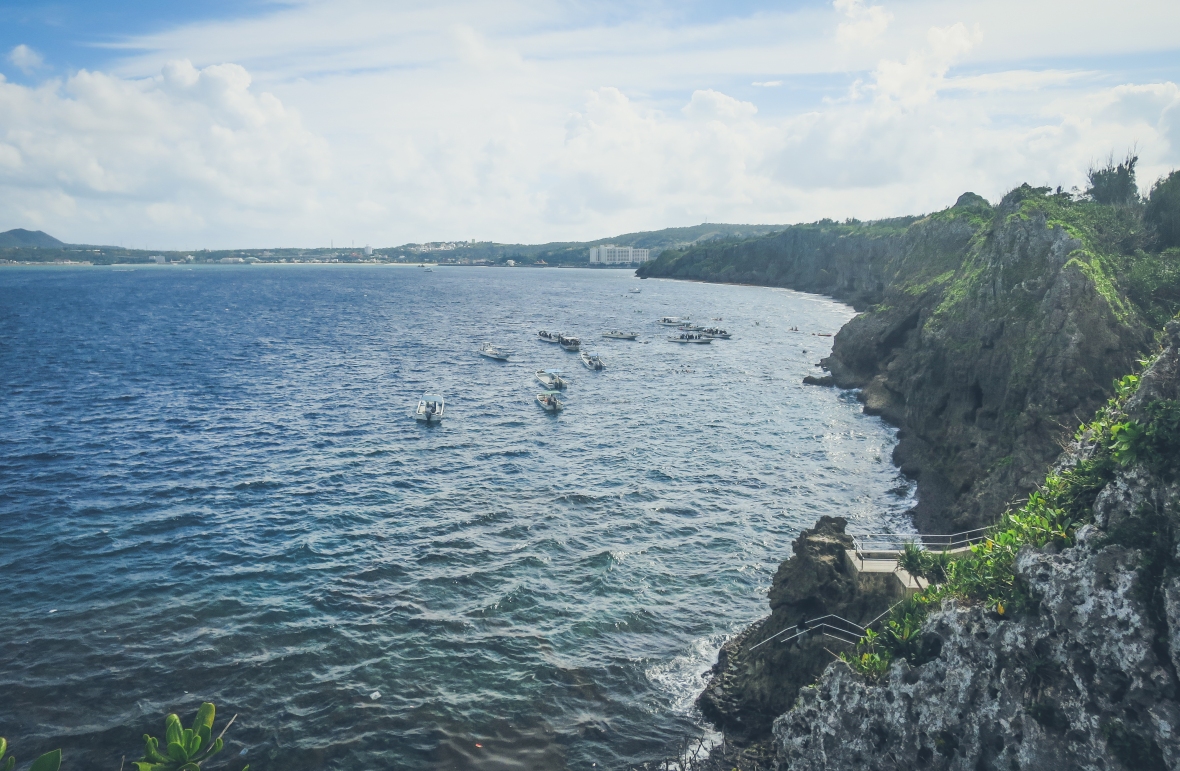 The next morning, we drove down National Route 58, hugging the western shoreline until we turned onto the quieter streets around Cape Maeda. Weathered dive shops and small family restaurants sprouted from the tall grass as we made our way slowly towards the water, and vans full of oxygen tanks and wetsuits lumbered up and down the narrow roads. The islands of Okinawa Prefecture are pockmarked by rocky coves and inlets, many of them offering excellent diving and snorkeling opportunities to beginners and seasoned professionals alike, and, on the main island at least, Cape Maeda is the place to be. As Ashley eagerly clambered over the rocks and made her way to the stony promontory at the far end of the cape, I remained safely on level ground, watching the tiny white boats approaching from the far side of the bay, carrying the day’s first crop of snorkelers and divers. Despite it being late November already, the temperature of the water was just fine, as we would find out the next day, and we lingered on the cliffs a moment more to soak in the morning sunshine. 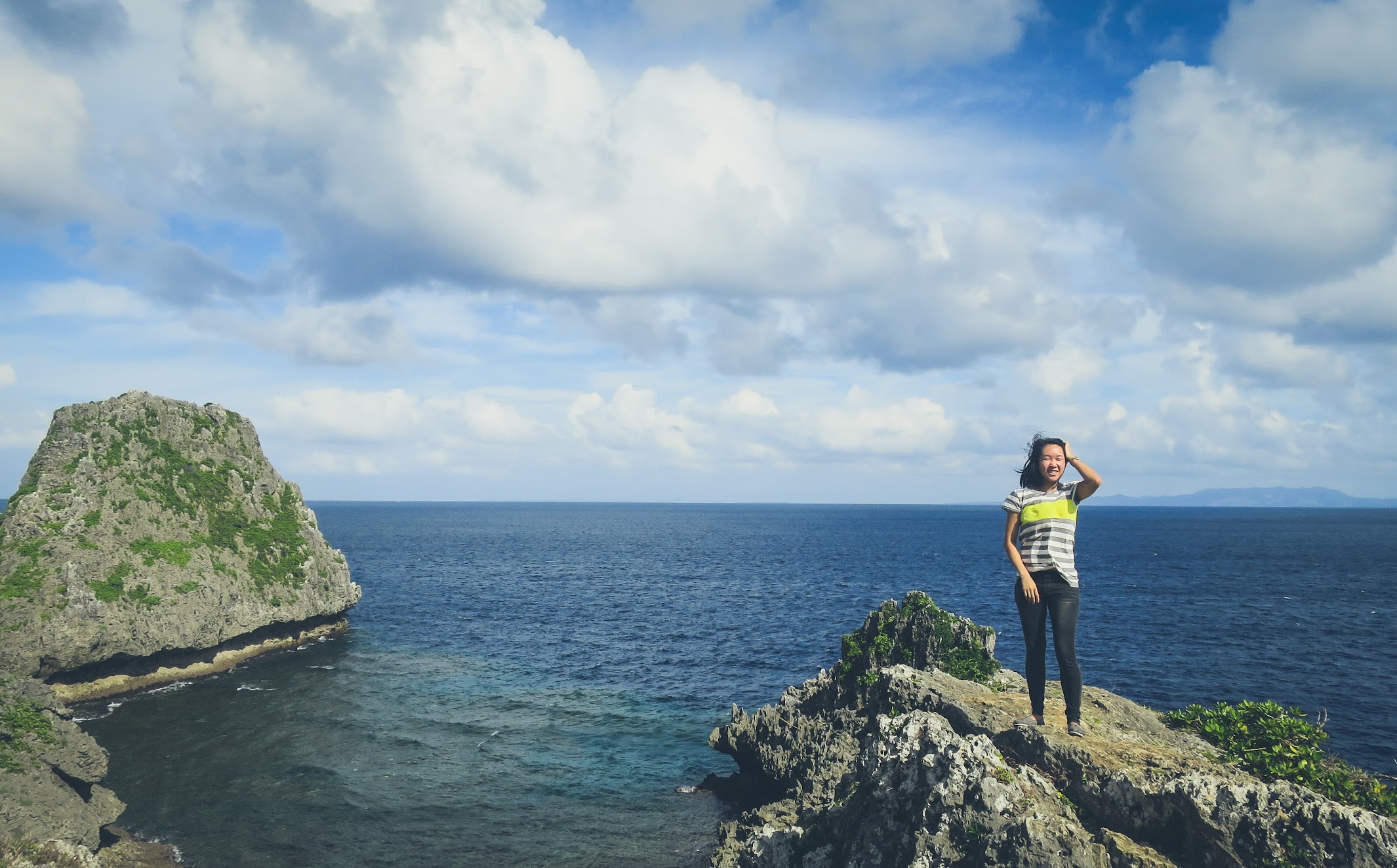 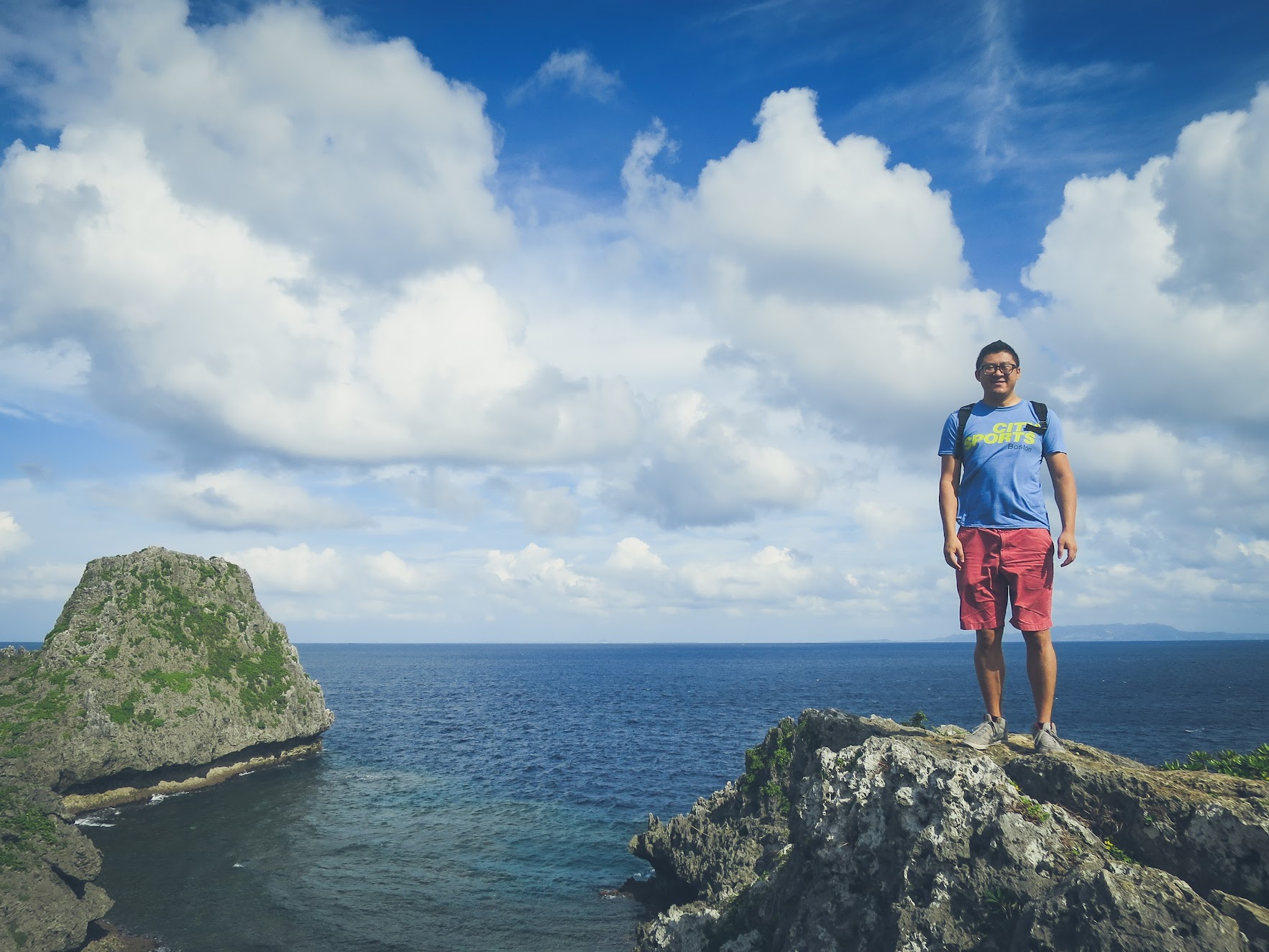 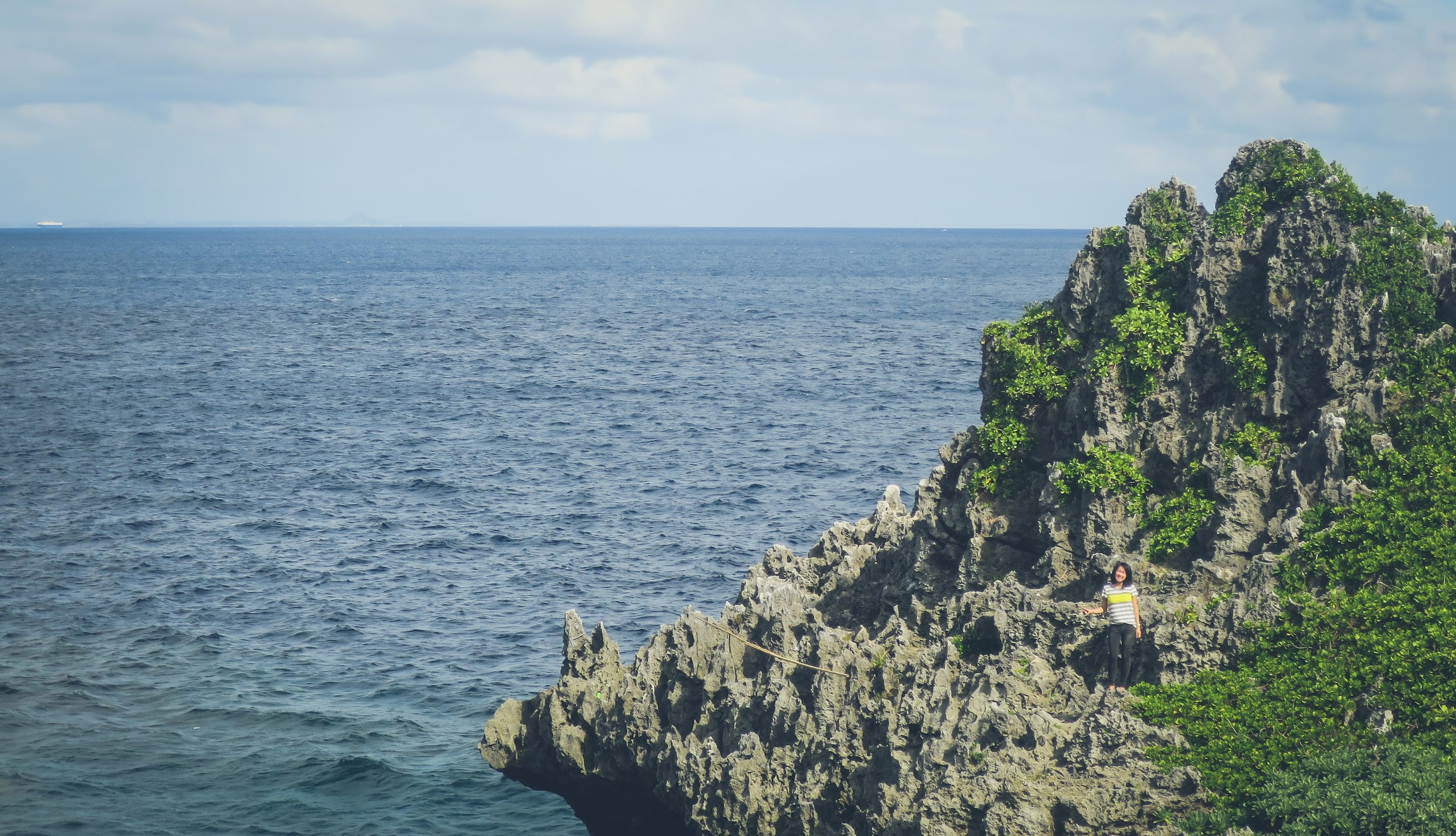 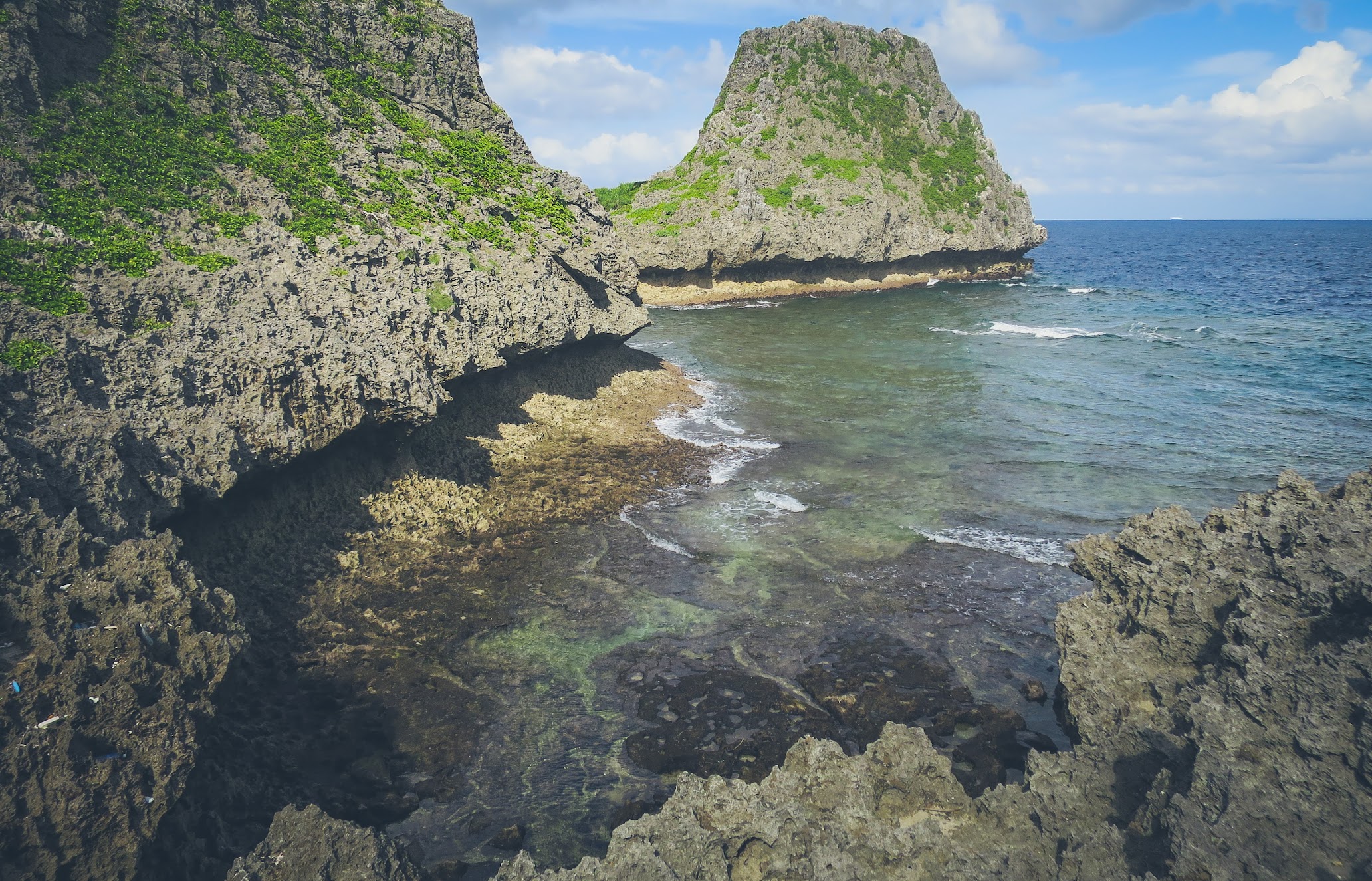 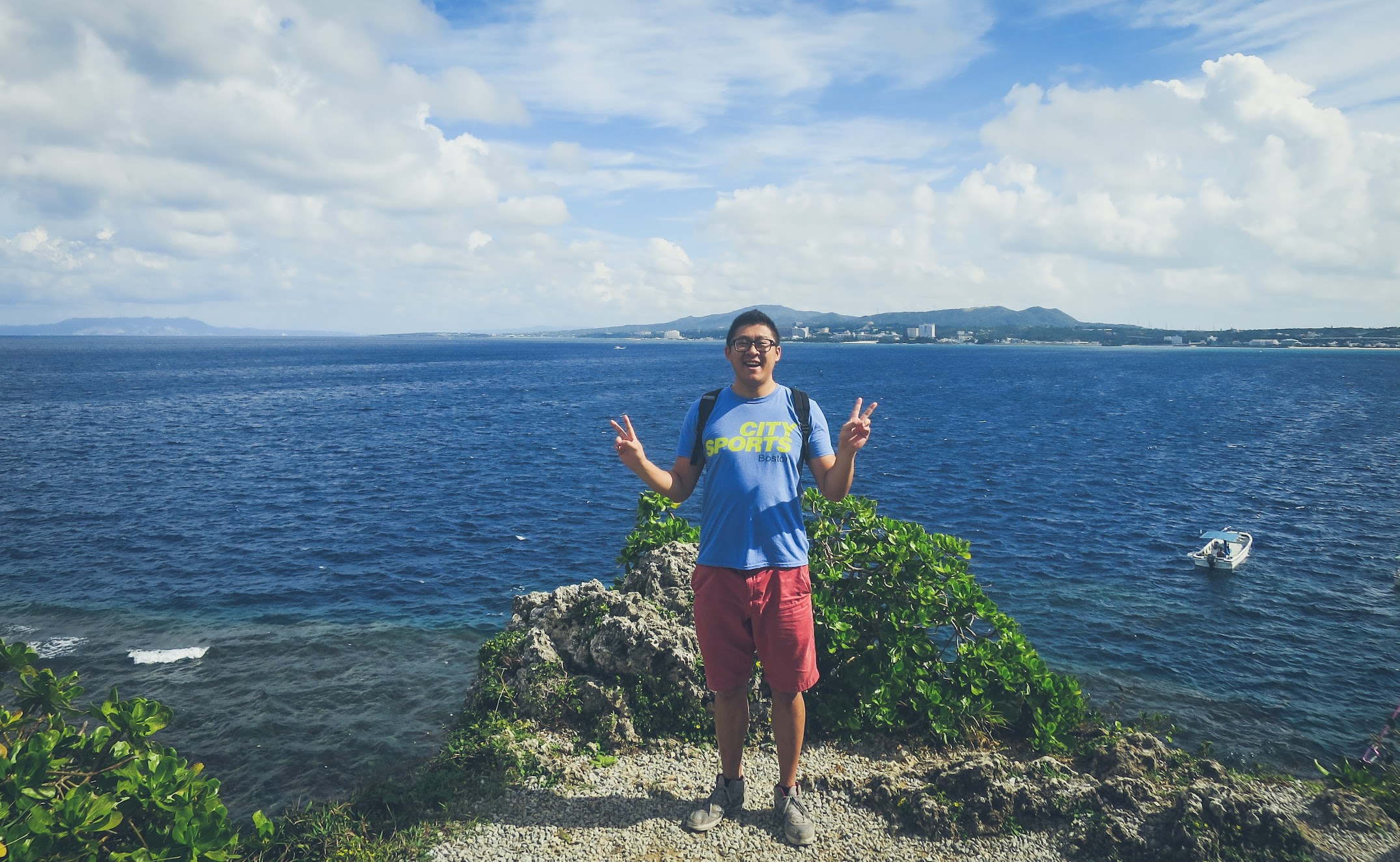 From the sunshine and blue waters of Cape Maeda, we drove down to the village of Yomitan, known for its pottery and glassblowing workshops, as well as being home to one of the best ramen restaurants on the island. Hachiren is housed in a low, wooden building just off of National Route 58, and it is entirely possible to miss it altogether. We kept a close watch on our GPS device as we approached the blinking destination onscreen, and we still almost drove past it. Once we had parked our car safely to the side, we made our way to the vending machine by the front entrance, where we punched in our orders and handed our tickets to the server. I got the Ra-jan Ramen, a bowl of noodles sitting in a fiery broth made of their own spicy oil and fried shrimp, while Ashley ordered the Signature Tsukemen, a dry noodle that comes with a bowl of thick broth for dipping. The spicy ramen was incredible, and I can always appreciate a thick slab of juicy pork, but after trying some of Ashley’s tsukemen, I wish I had ordered the same. The tsukemen at Hachiren is a specialty of theirs, and the broth definitely lived up to the fame. We were also taught by one of the cooks behind the counter to only dip half the noodle in the broth, in order to balance out the flavours along the noodle better, and we’ve been eating tuskemen that way ever since. 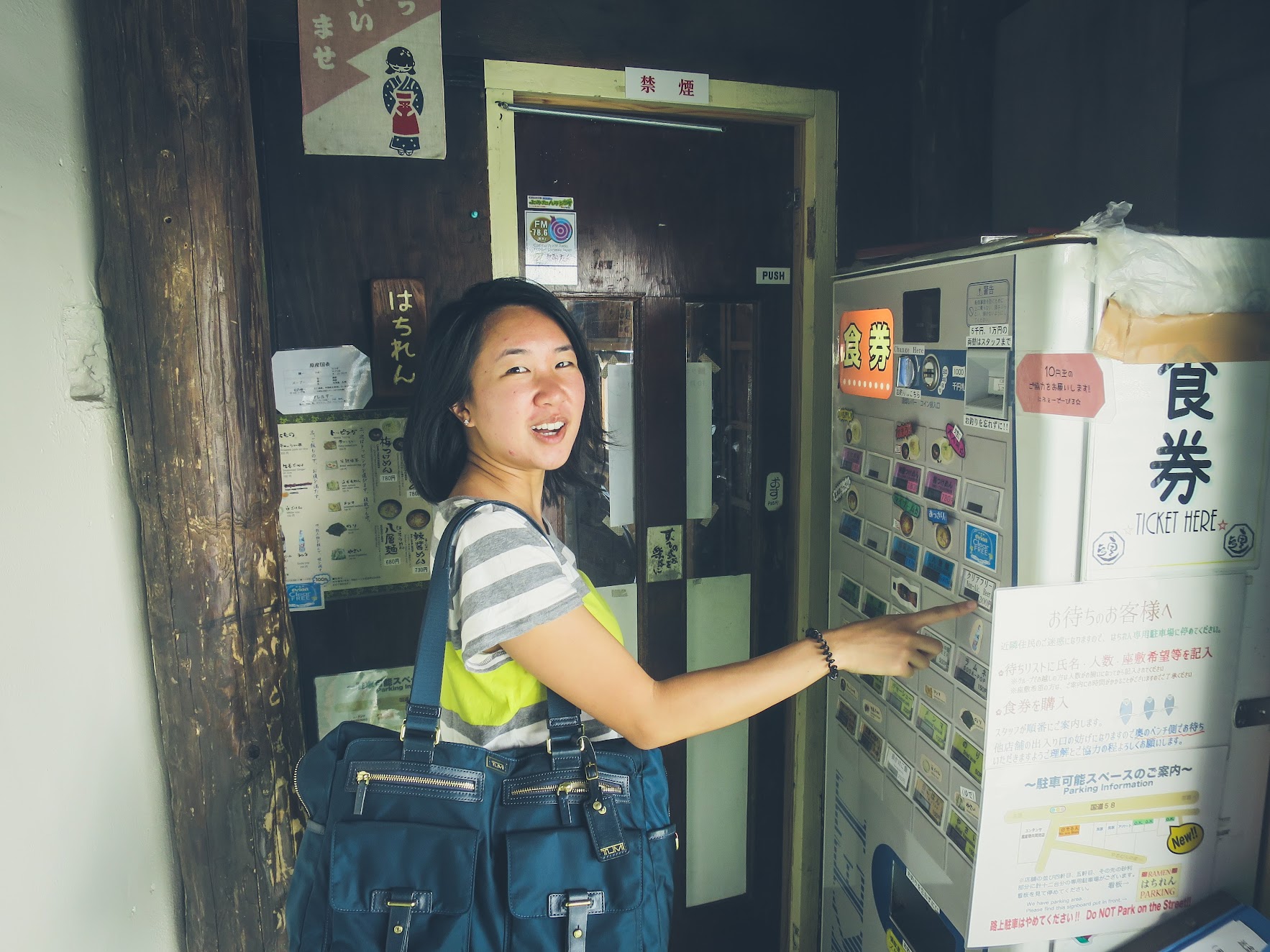 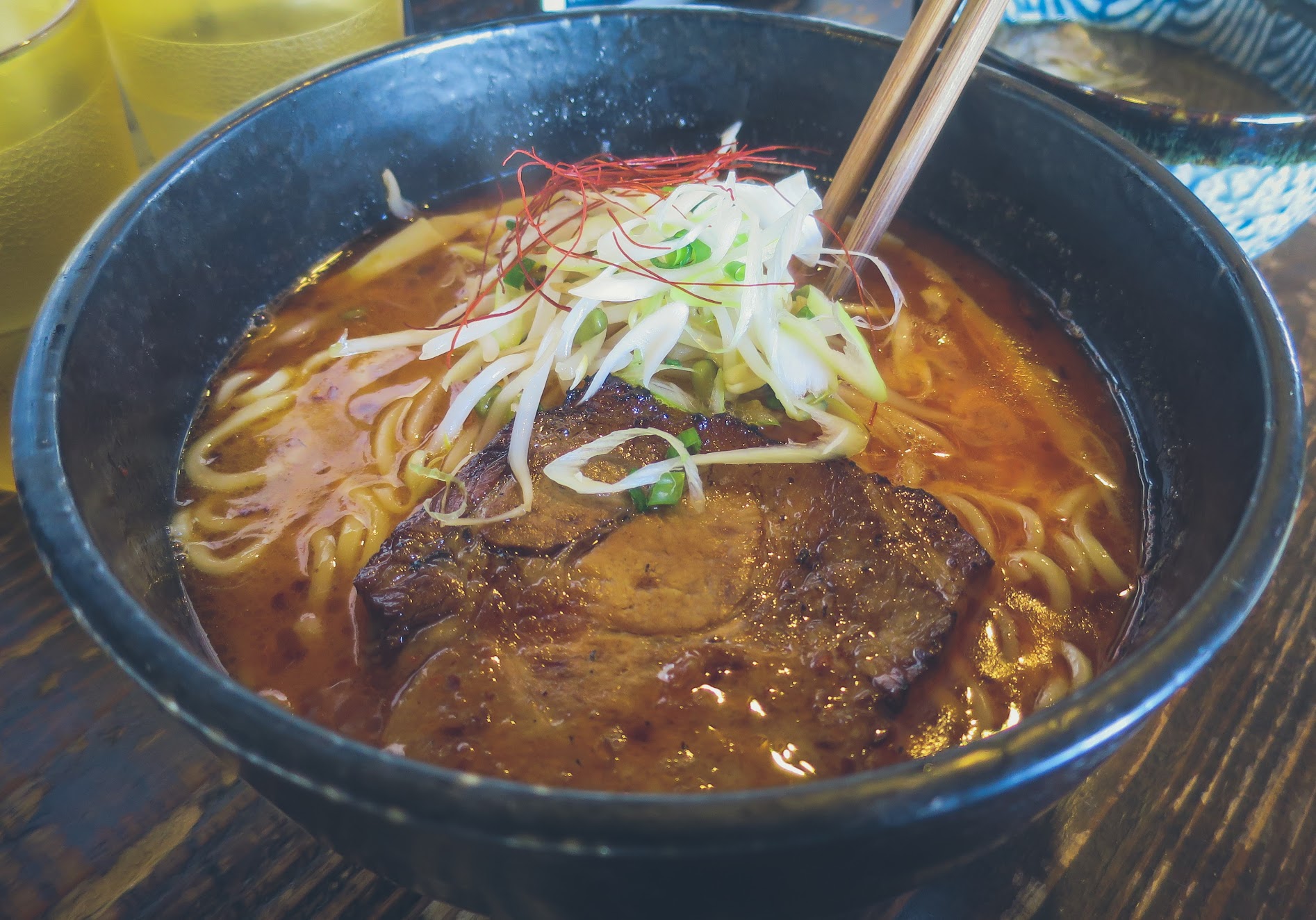 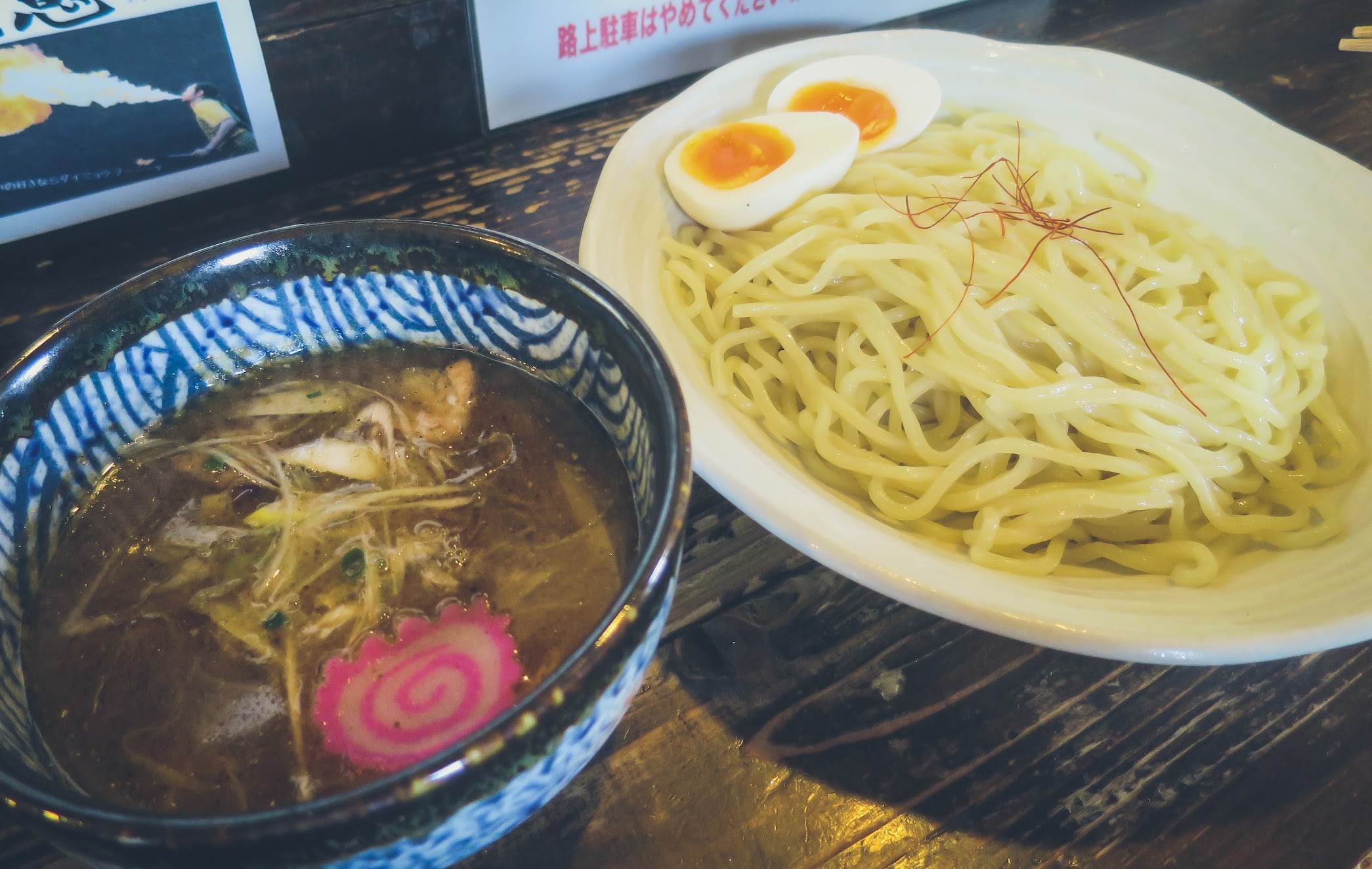 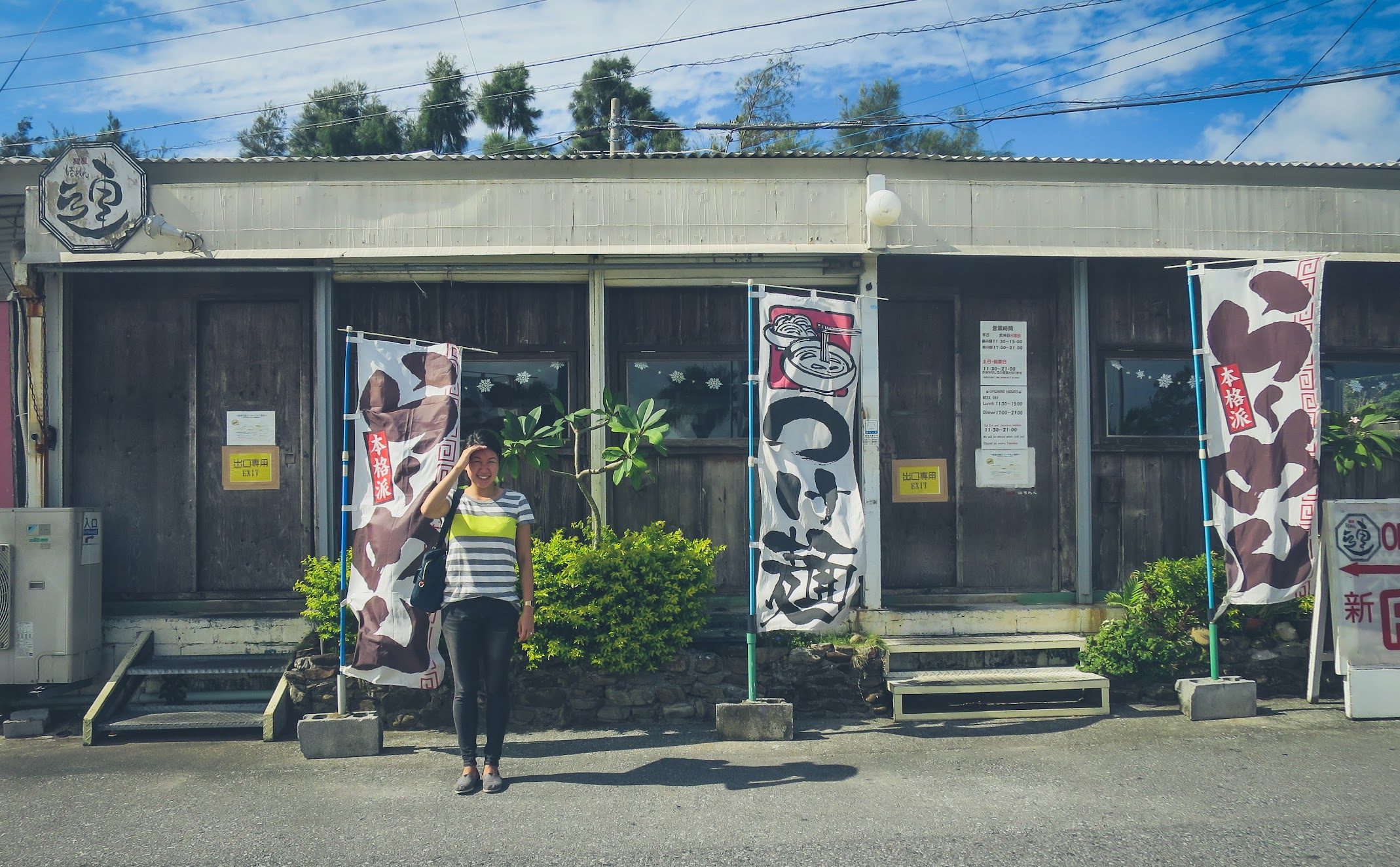 Ryukyu and the Tale of Gosamaru

Though the islands of Okinawa have been a part of Japan since 1872 (with the exception of the post-war years from 1945 to 1972, when it was under the military governance of the United States), it was once a thriving kingdom of its own, monopolizing maritime trade in the East China Sea for almost two centuries. Medieval castles dotted the landscape of the main island as various factions fought for dominance of key ports and trade routes in the 14th and early 15th Centuries, until the wealthy kingdom of Chuzan, in the economically prosperous middle of the island, defeated and annexed the martial kingdom of Hokuzan in the north (in 1416 AD), and the smaller kingdom of Nanzan in the south (in 1429 AD). So say the legends, at least. The newly unified Ryukyu Kingdom, flush with Chinese technology and knowledge, as well as favourable trade and diplomatic relations with the Ming Dynasty, quickly expanded their rule across the entire archipelago. For 200 years, merchant ships from Ryukyu regularly traded their wares from Japan to the Philippines, from Indonesia to Vietnam, as well as the highly guarded ports of China. The golden age of Ryukyu began to tarnish in the late 16th Century, however, with increasing competition from the newly-arrived Europeans, as well as the predatory designs of a recently-reunified neighbour to the north.

Nakagusuku is a hilltop castle ruin in the village of Kitanakagusuku, on the east coast of Okinawa. It was built in the early 15th Century by a Ryukyuan lord named Gosamaru, an instrumental figure in the unification of the Ryukyu Kingdom. As a reward for his faithful service, he was given the former royal seat of the northern kingdom of Hokuzan, before constructing Nakagusuku as a deterrent against the treasonous ambitions of a man named Amawari, the lord of nearby Katsuren Castle. However, it was Gosamaru himself who was accused of formenting a revolt against the king, by Amawari no less, and in 1458 AD, an army led by Amawari attacked Nakagusuku. The story goes on to say that Gosamaru made no effort to defend the castle, the better to prove his loyalty to the king, taking his own life in the process. Amawari had little time to enjoy his victory, though, as, later that year, the Ryukyuan army attacked his base at Katsuren Castle and had him executed, his treacherous schemes revealed at last. One popular theory is that the entire conflict was planned and carried out by operatives of the government, in order to remove the two biggest threats to the Ryukyuan throne, but regardless of the motive, the story of Gosamaru and Amawari remains a popular tale among Okinawans to this day. 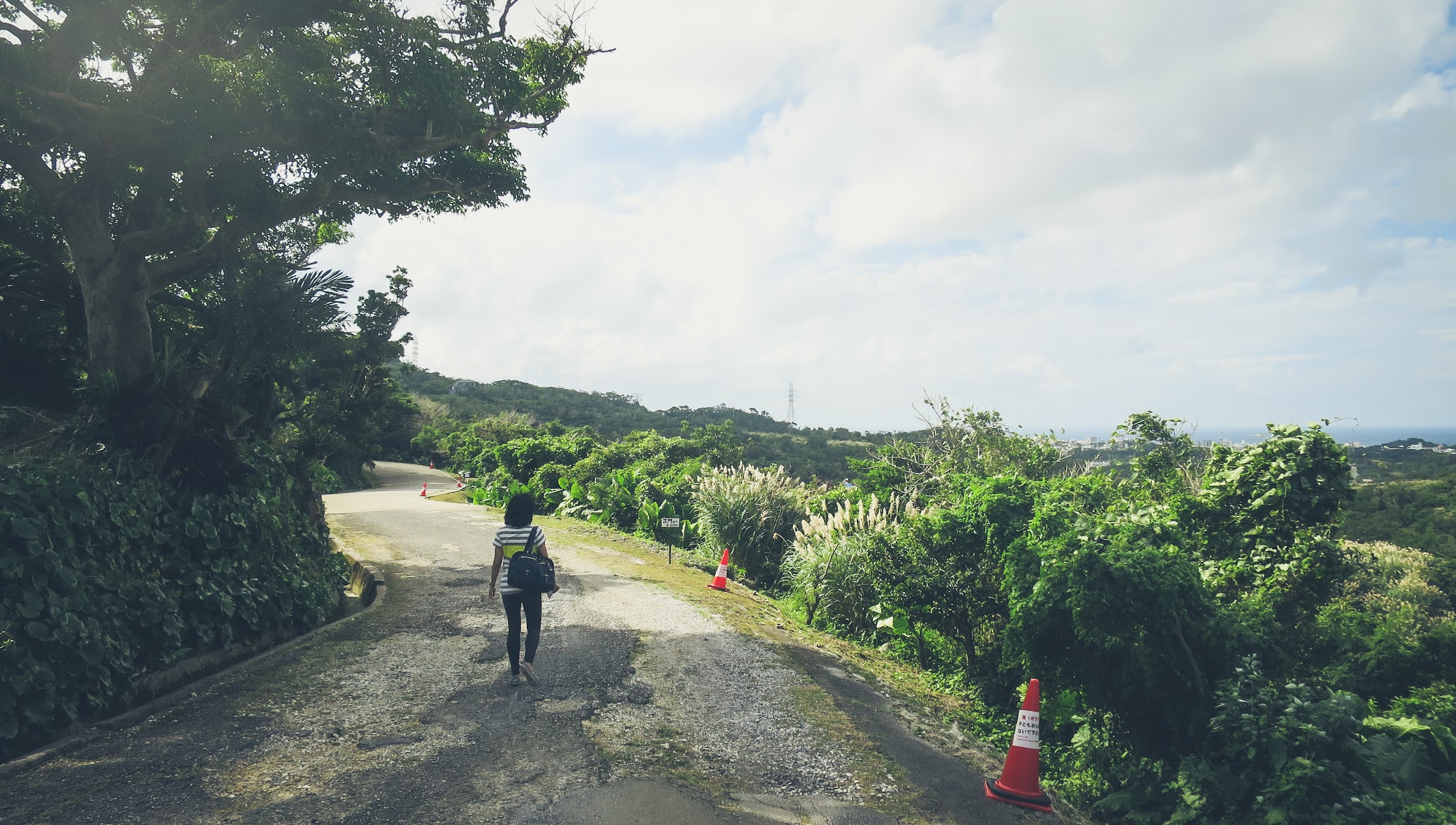 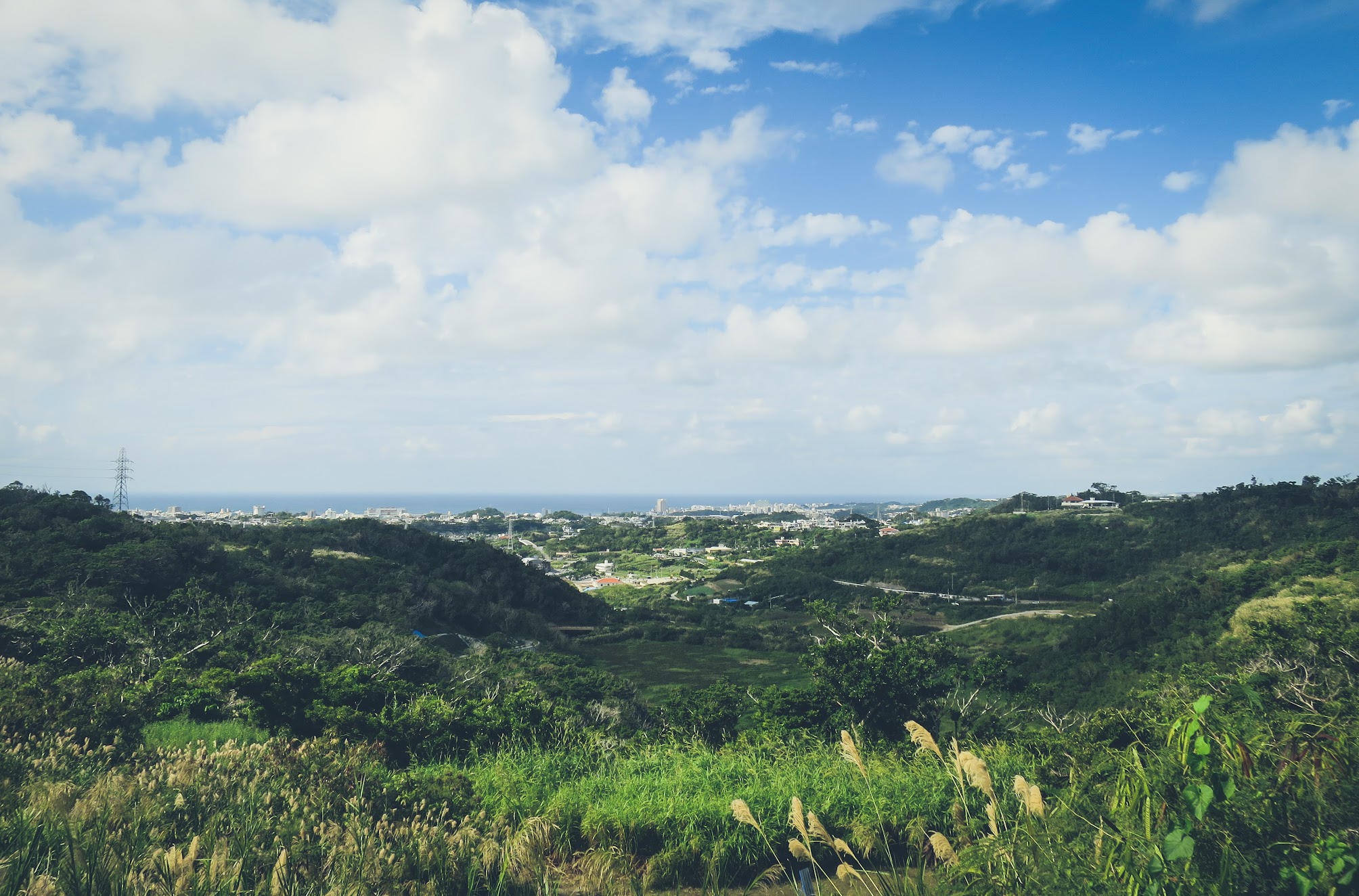 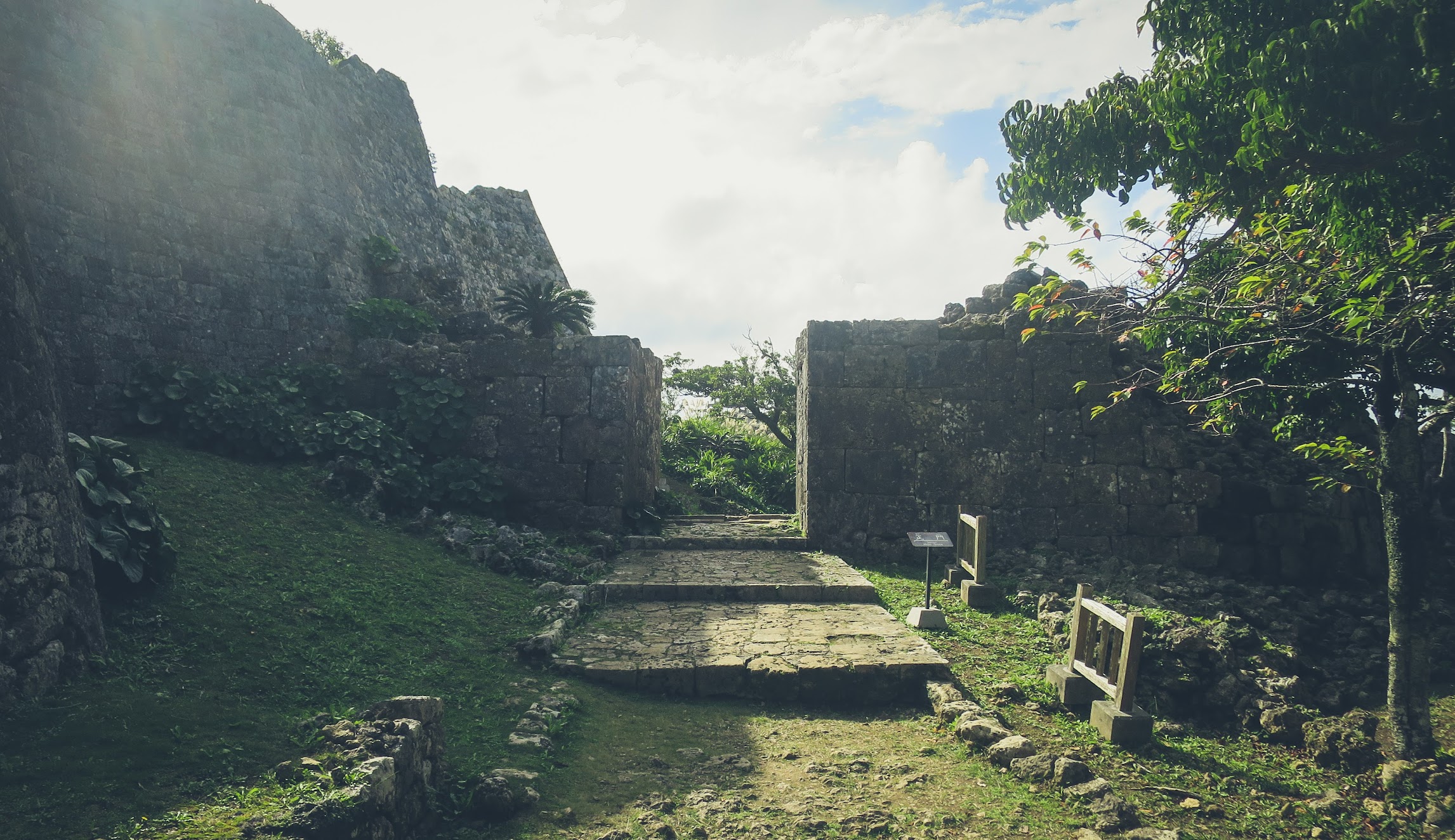 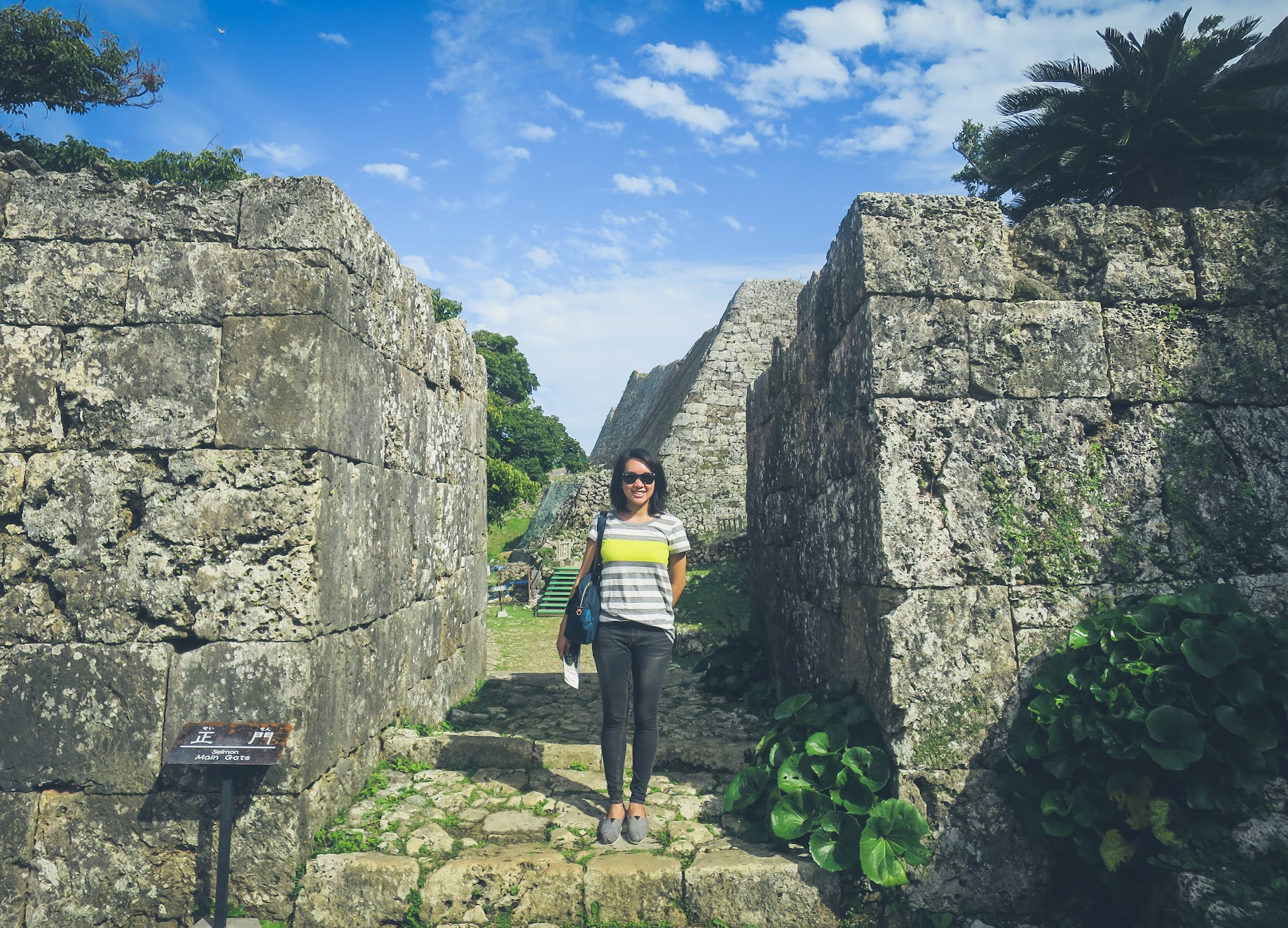 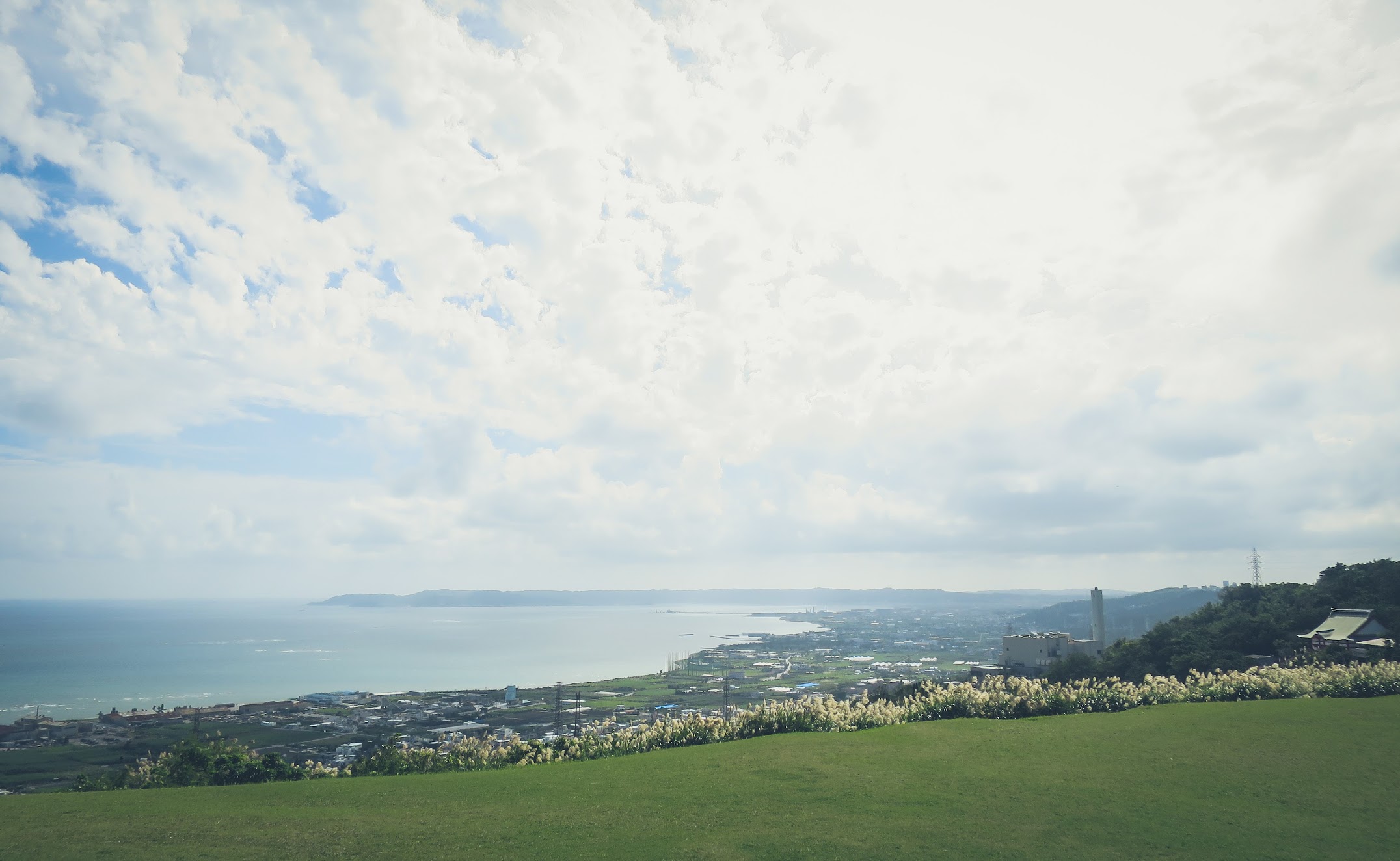 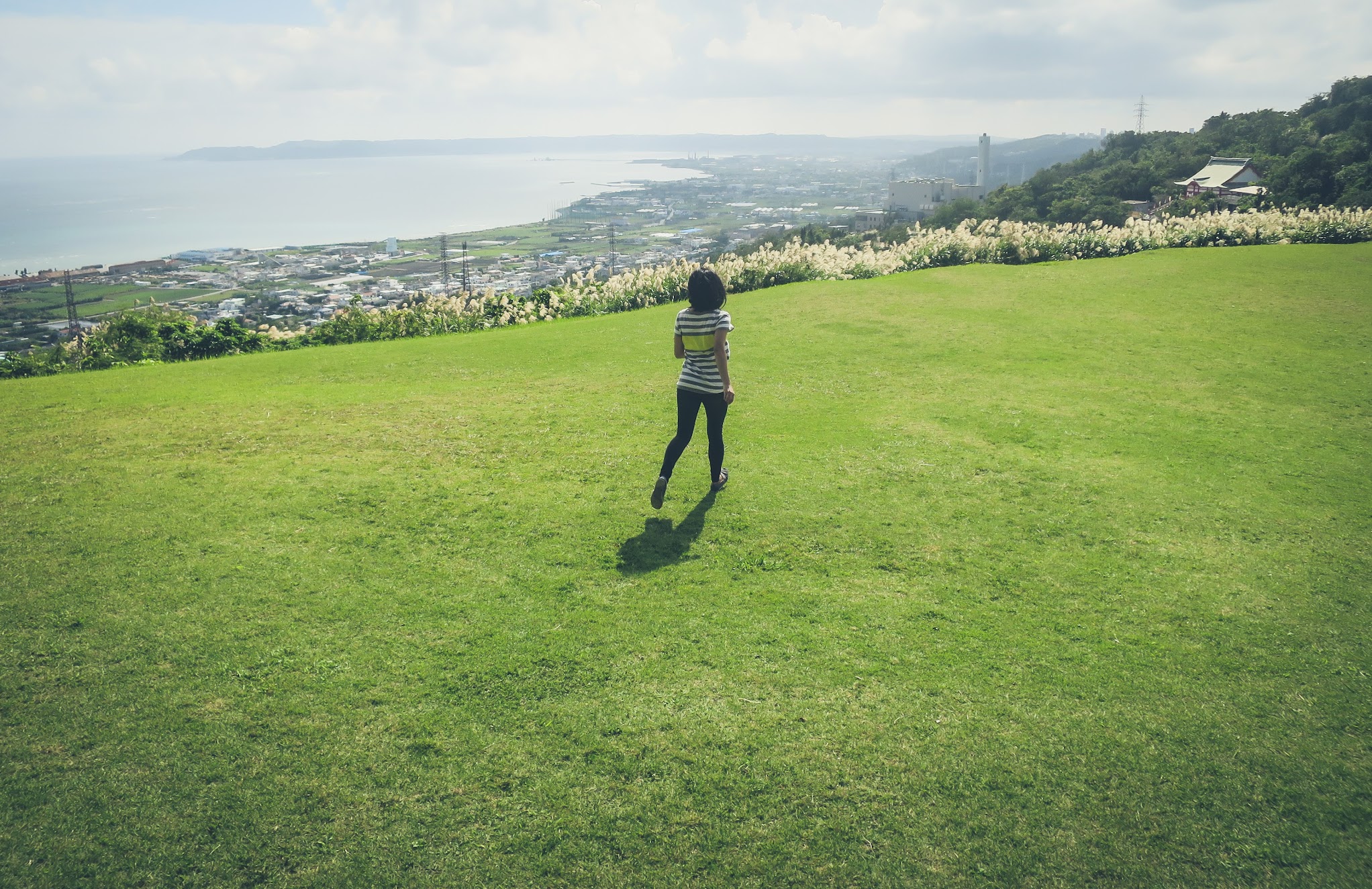 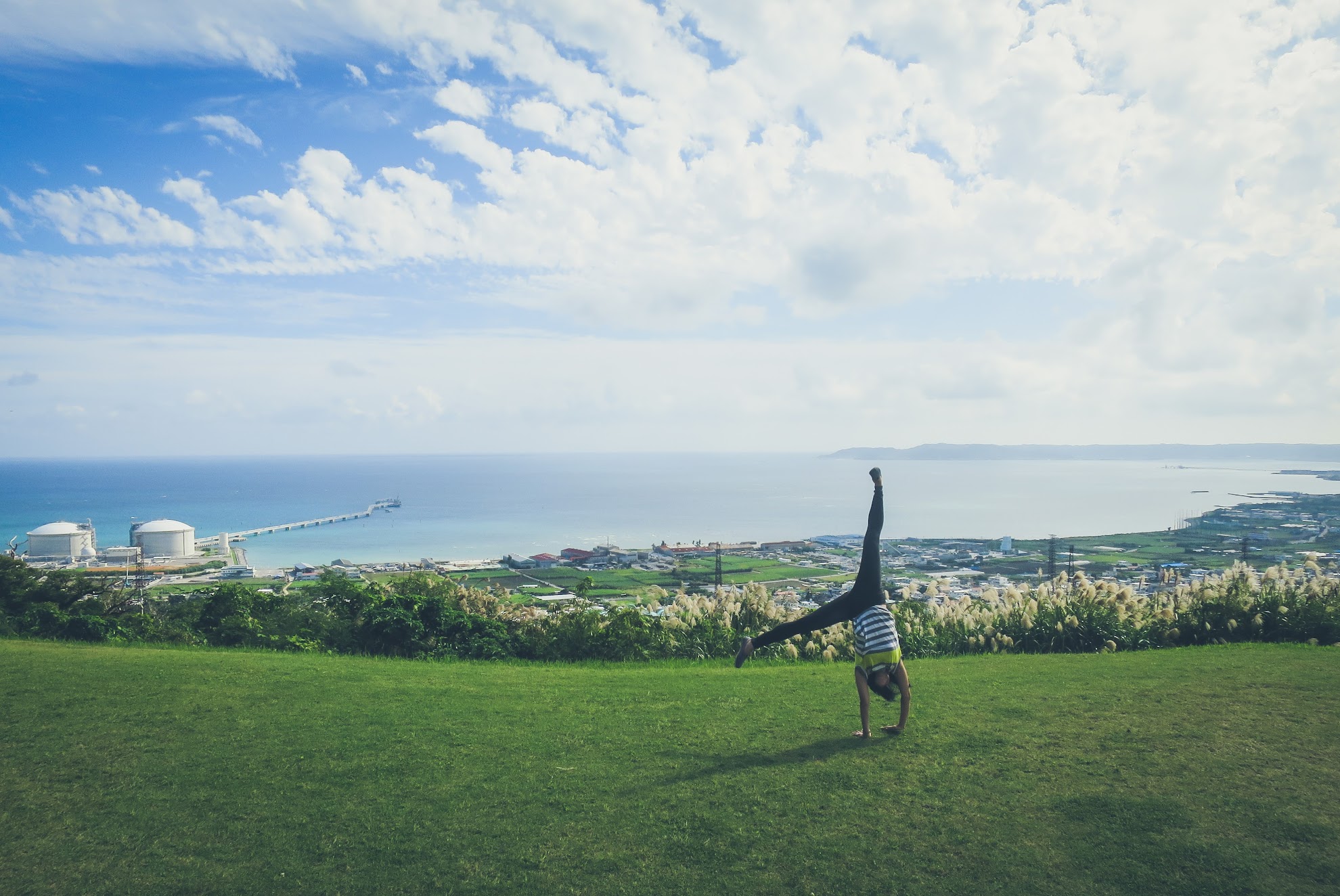 As we stepped out of our car and approached the entrance to the site, a winding, paved road stretched out in front of us, disappearing around leafy bends and continuing beyond into the forested hillsides. The climb to the summit alone took about 15 to 20 minutes, an eternity under the tropical sun, though the increasing elevation afforded us fantastic views of the deep green countryside below, and the faded blue of the Pacific beyond. When we finally rounded the last corner and scrambled onto ancient stones, we got our first glimpse of the low castle walls, tracing the contours of the terrain in front of us. Left in ruins after the internecine conflicts of the 15th Century, Nakagusuku is now one of the most famous castle ruins in Japan, receiving a UNESCO World Heritage Site designation at the start of the new millennium. The layout of the castle is still evident, even through the rubble and crumbling edifices, and, judging from its commanding sight lines of the surrounding geography, it’s easy to understand the strategic importance of such a structure.

The downfall of the Ryukyu Kingdom could not be espied from the tallest walls or foreseen from within the sturdiest castles, however, as the seeds of its own demise were sown from without, instead of within. In 1609 AD, the feudal lords of Satsuma, present-day Kagoshima, invaded Ryukyu from across the seas, after obtaining authorization from the newly-ascendant rulers of Japan, the Tokugawa Shogunate. For the next 263 years, the Ryukyu Kingdom was a tributary state to both China and Japan, acting as a neutral middle ground for trade and diplomacy between the two regional giants. China, with its longstanding relations with the Ryukyu Kingdom dating from the late 14th Century, was keen on ensuring that the islands retained their sovereignty, a fiction that the Japanese happily played along with, to everyone’s benefit. By the late 19th Century, however, the golden years of the arrangement had long since passed, and soon after the overthrow of the Tokugawa Shogunate and the disruptive events of the Meiji Restoration, Japan threw off all pretense of Ryukyuan sovereignty and formally reconfigured the islands into a feudal domain in 1872. 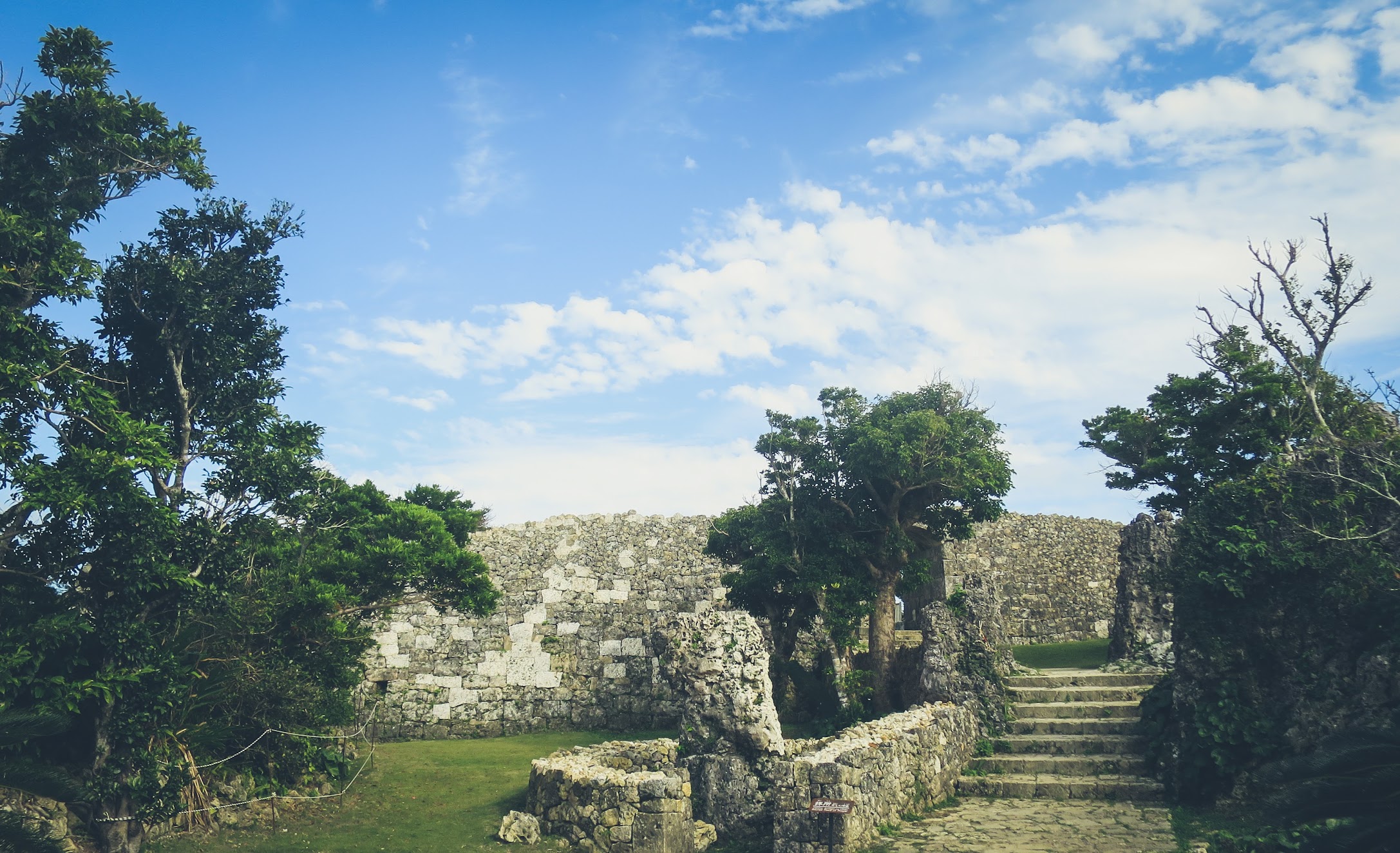 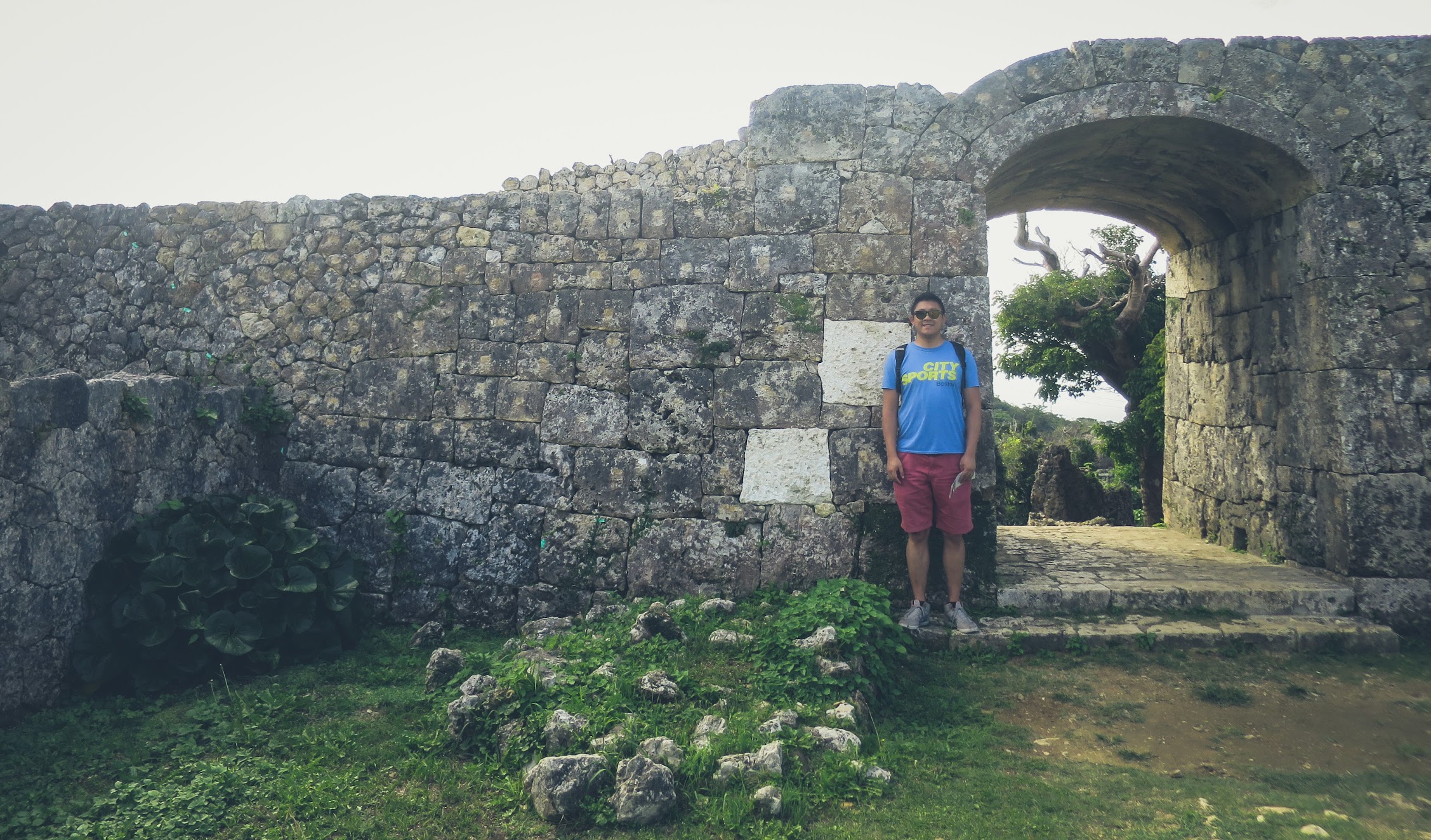 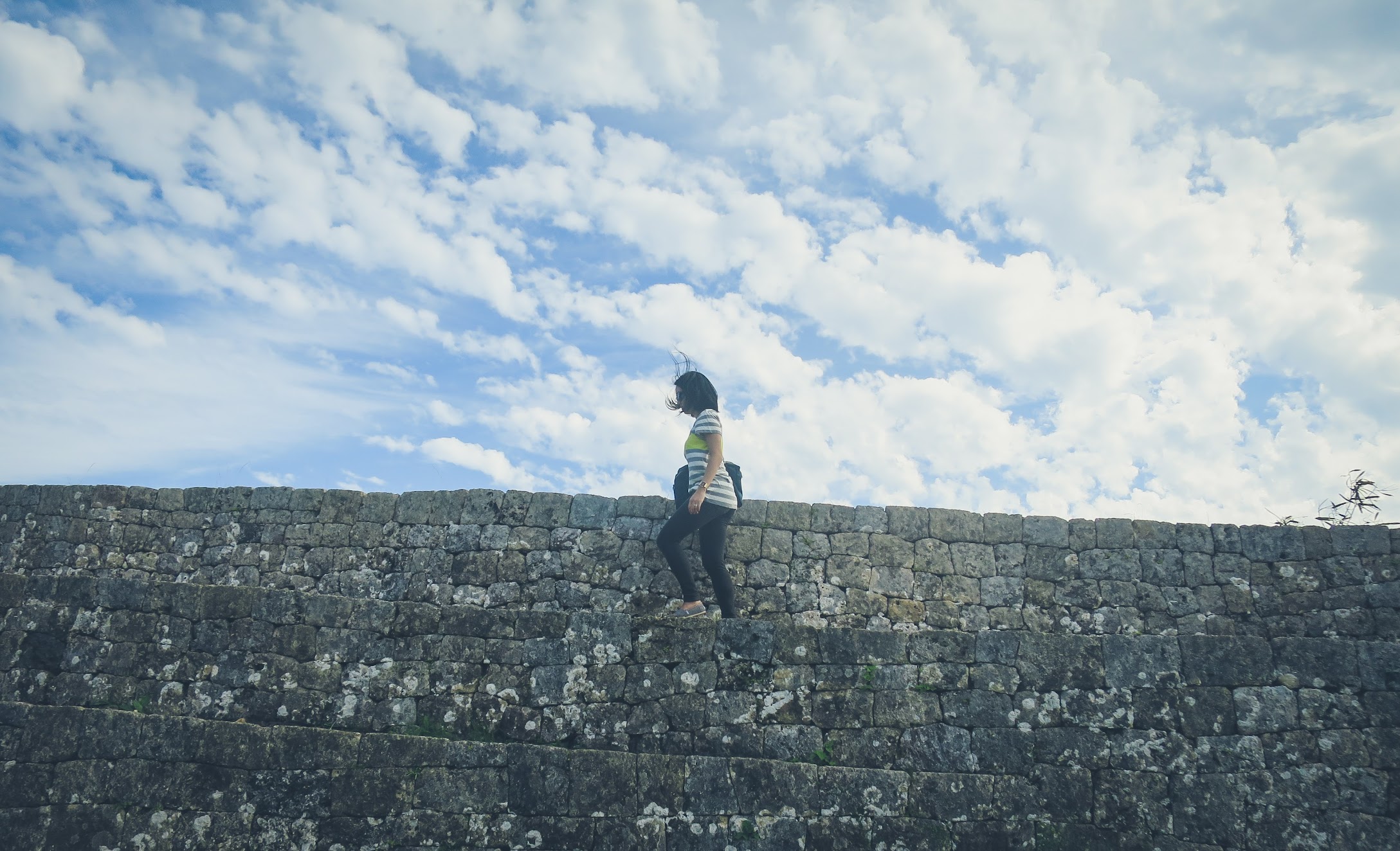 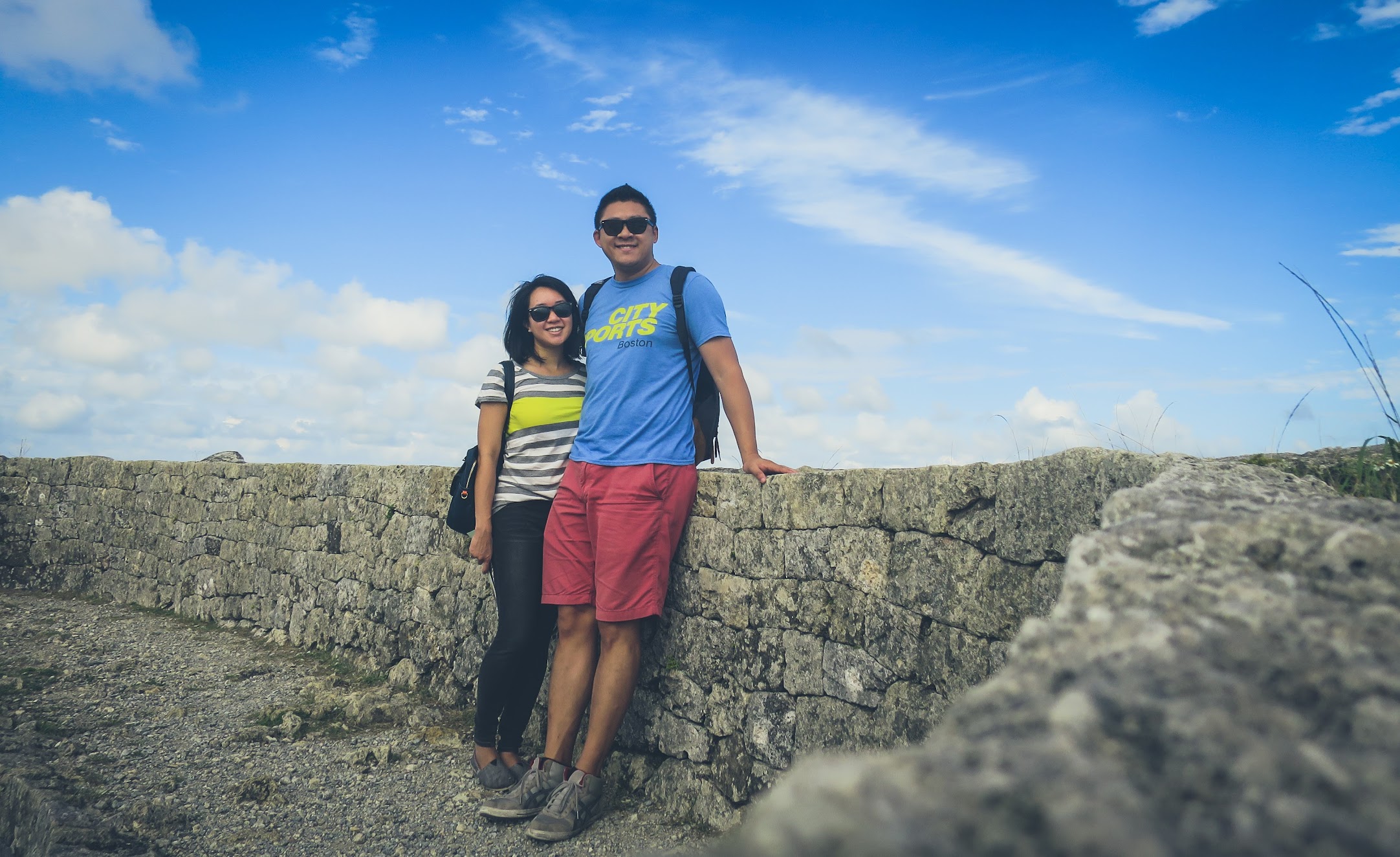 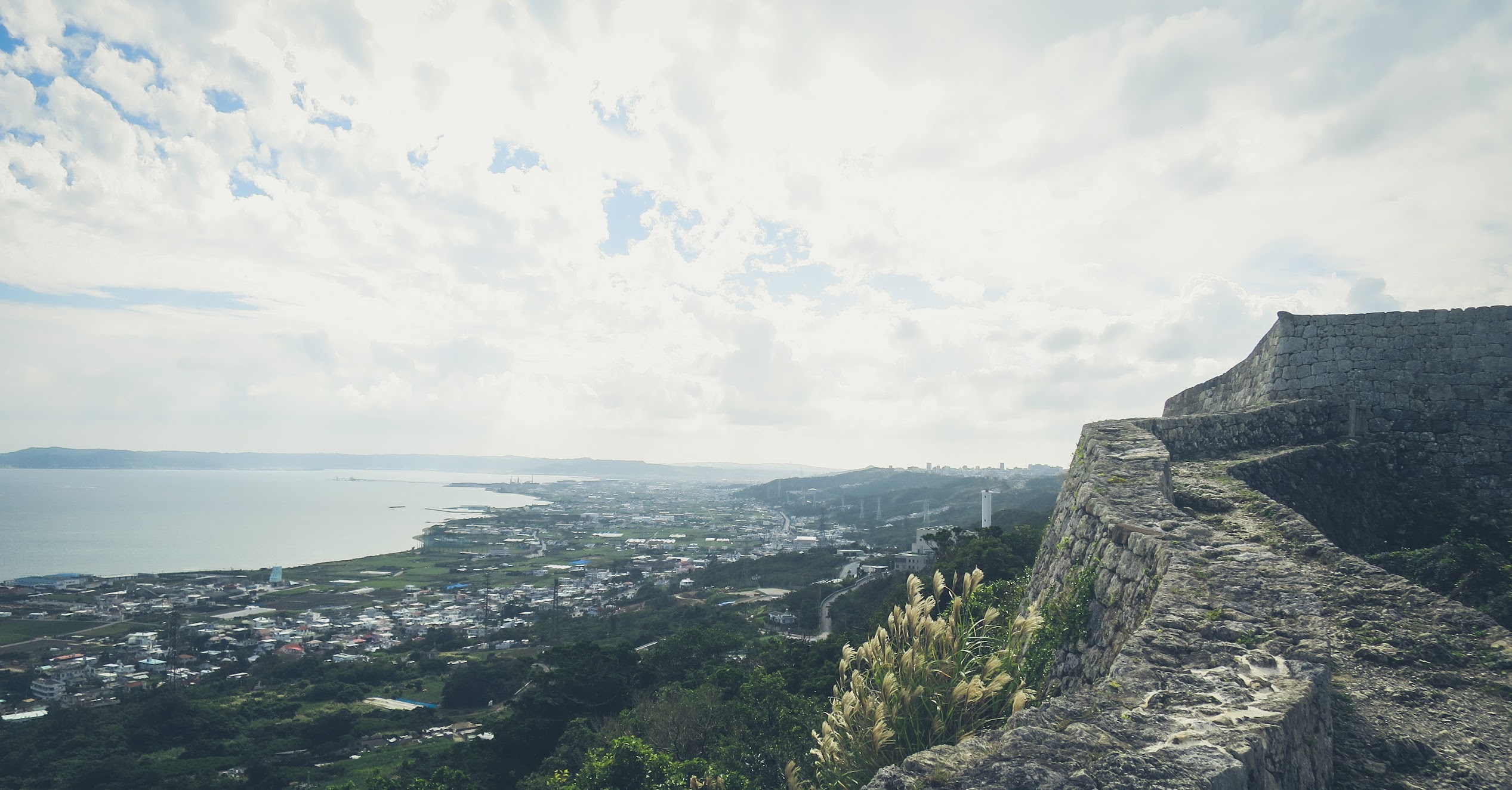 The annexation of Okinawa was only the beginning of Japan’s imperial ambitions, as, over the next few decades leading up to and including World War II, the Japanese Empire added Taiwan, the Korean Peninsula, Manchuria and parts of northern China, former German possessions in the South Pacific, the Philippines, colonial Hong Kong, British Malaya and Singapore, Dutch Indonesia, French Indochina, and British Burma to their Greater East Asia Co-Prosperity Sphere. After reaching its territorial peak in the early years of World War II, however, Japan’s overseas possessions began to crumble and fall away, one by one, as the Allied Powers island-hopped their way towards the very heart of the empire. On April 1, 1945, the war came to Okinawa. 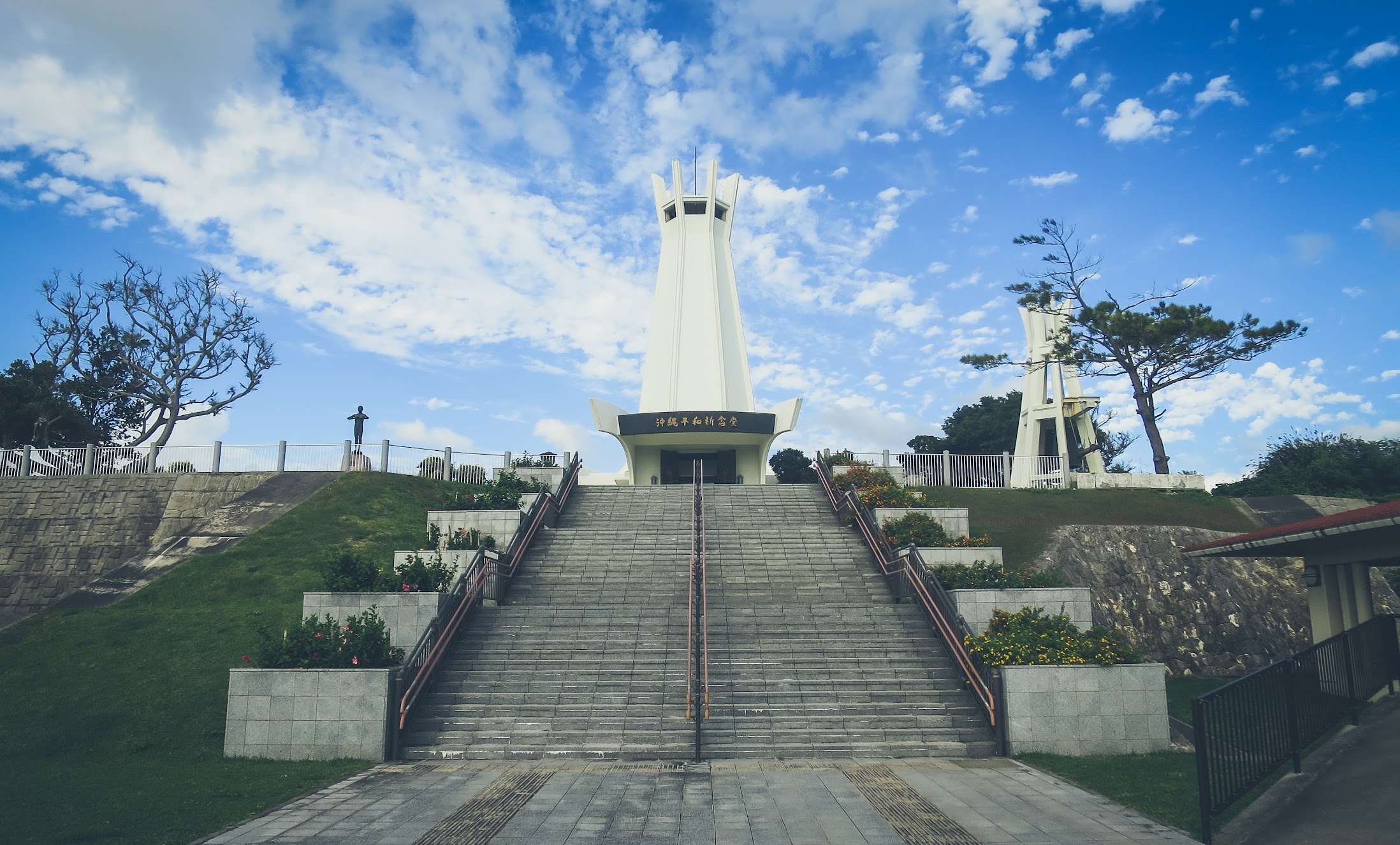 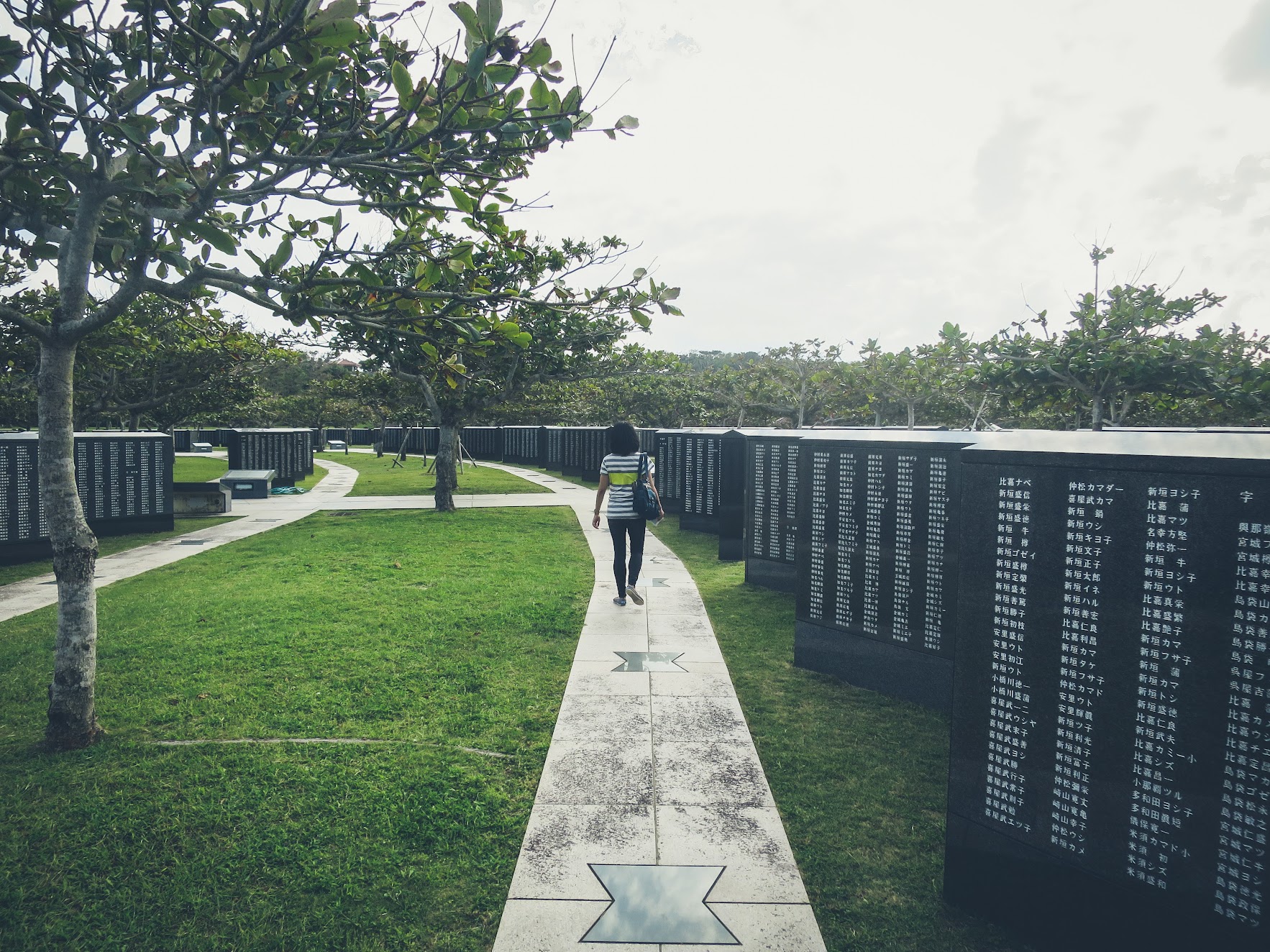 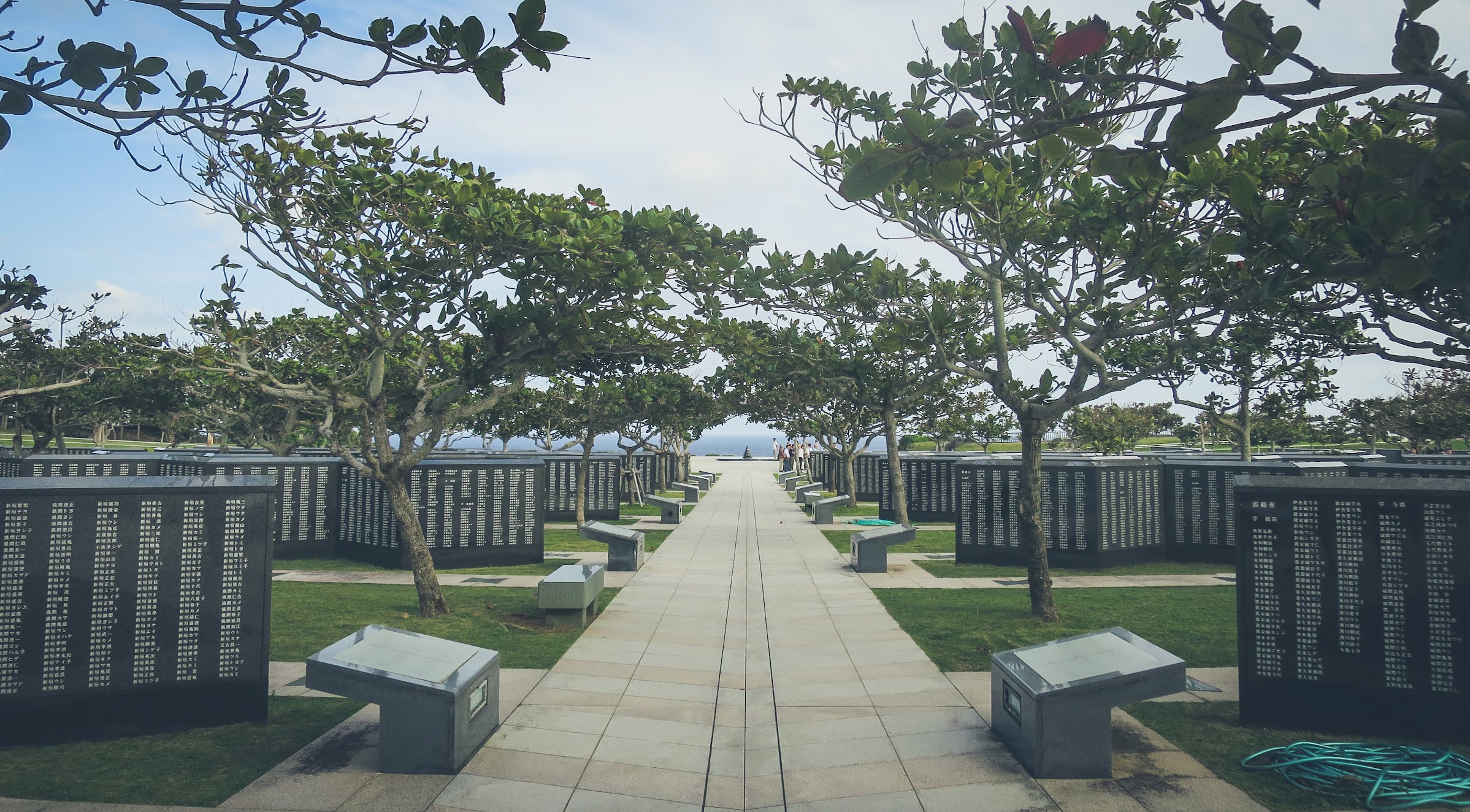 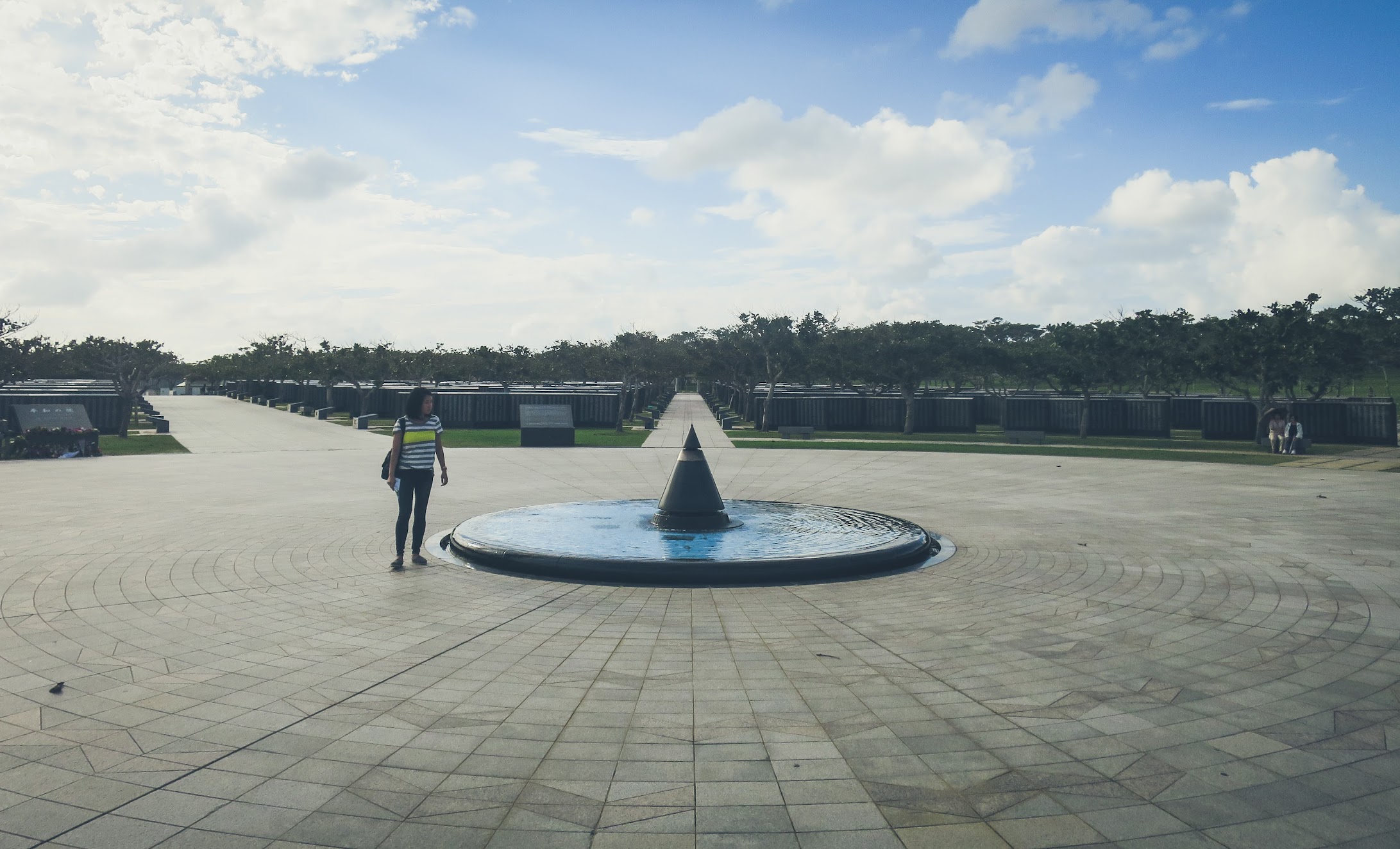 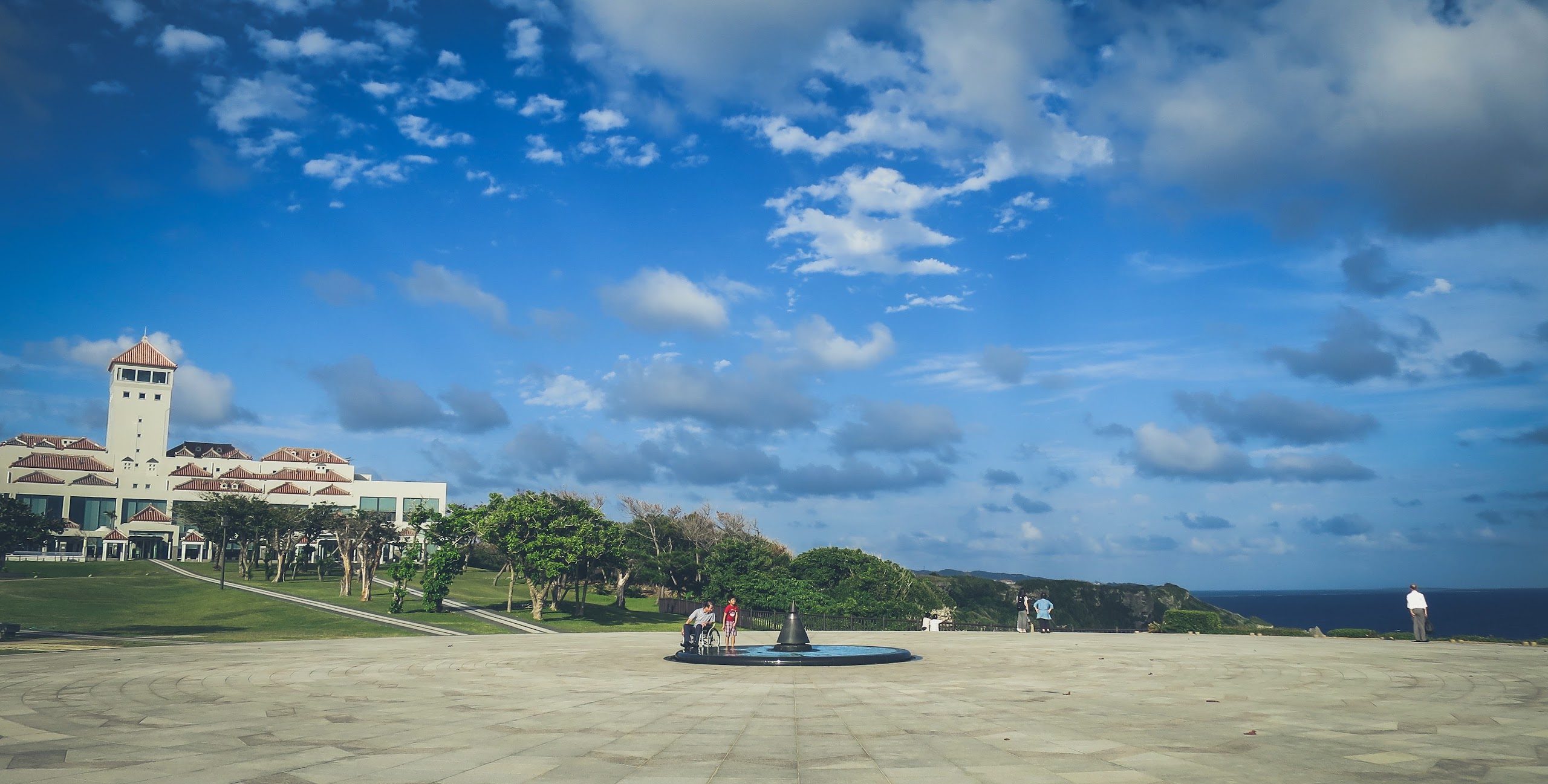 Our last stop of the day was the Okinawa Prefecture Peace Memorial Park, in the city of Itoman. It was here, on the southern coast of the main island, that the final skirmishes of the Battle of Okinawa took place. The park was established in 1972 to remember all those who lost their lives during the terrible 82-day-long battle otherwise known as the Typhoon of Steel, the names of whom are inscribed on concentric waves of black granite stone surrounding the Flame of Peace. An estimated 120,000 soldiers were killed in the fighting, along with over a third of the civilian population of 300,000, marking it as one of the bloodiest conflicts in the Pacific Theater. Just up the hill from the Cornerstone of Peace, as the rows of inscribed granite stones are collectively referred to, lies the Okinawa Prefectural Peace Memorial Museum, a compellingly-presented account of the Battle of Okinawa. Ashley and I hadn’t intended to spend much time inside, but we ended up wandering its wings and exhibits for the better part of the afternoon. By the time we emerged from within its white walls, the sun had begun to set, and clouds from the south had moved in to usher out the last remnants of the day. 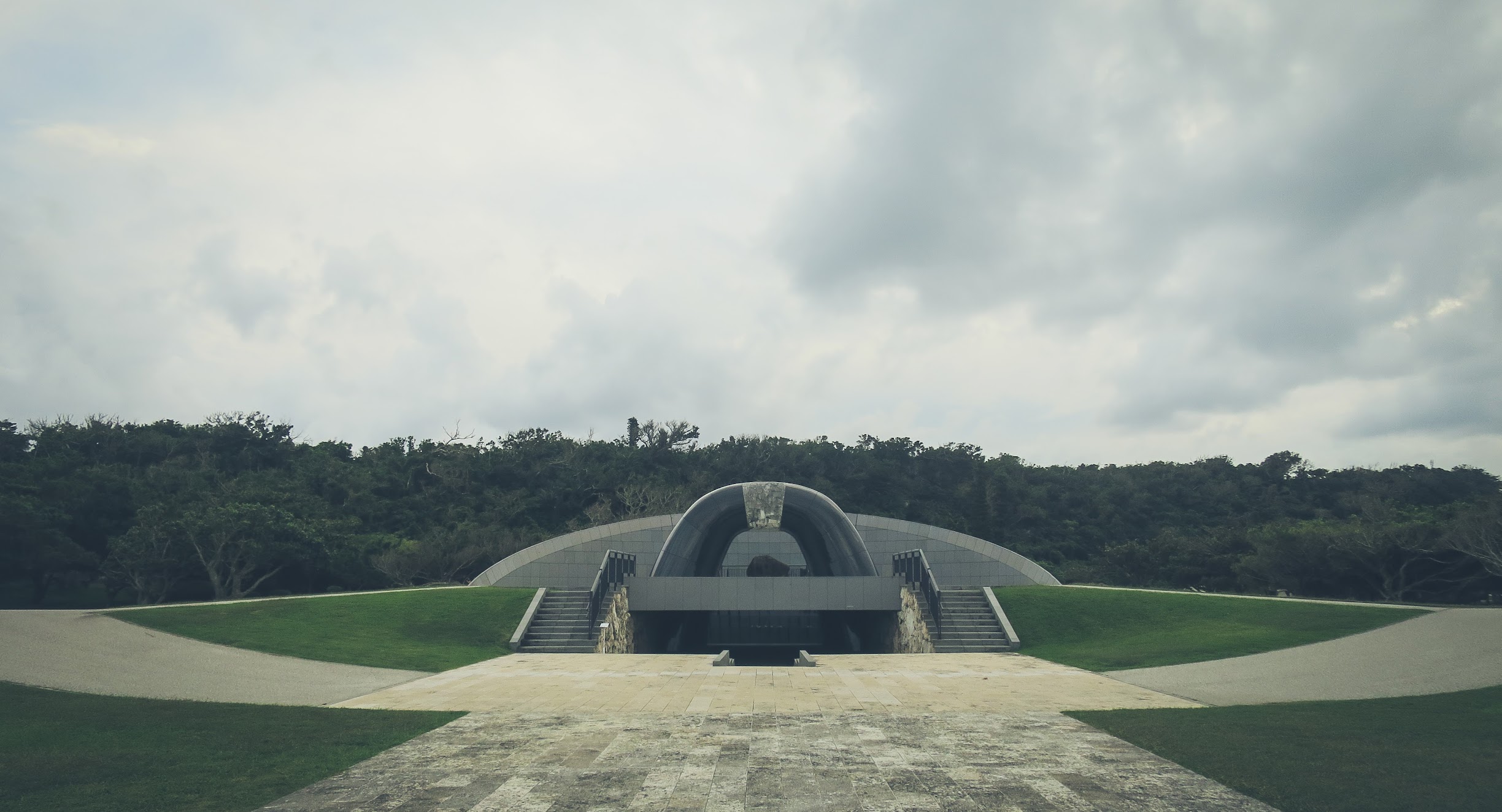