Despite enjoying the sights and sounds of Muscat the day before, Ashley and I couldn’t wait to start on our road trip through Oman’s gorgeous landscapes. It wasn’t until recently that we started renting cars and driving ourselves through our holiday itineraries, first in Okinawa in 2015, and then Iceland in 2016 and California this past summer, and it has opened up places in ways that wouldn’t be possible if we relied on public transportation or tour group operators. The luxury of taking our time and setting our own schedule, as well as the ability to make impromptu and spontaneous stops whenever we want, is well worth the rental cost. It also adds something to the travel experience to go out on our own and watch a place unfold itself mile by mile, as if we were the only people in the world. Certainly there were parts of Okinawa, and large parts of Iceland and the Pacific Coast Highway, where we were the only vehicle on the road, and Oman promised to be much the same.

Having lived in Hong Kong for the last eight years, where the public transportation network is arguably the best in the world, I don’t have much need for driving, nor do I especially miss it on a day to day basis. In fact, when we do go on a holiday that involves driving, there’s a part of me that gets a little bit anxious about getting behind the wheel again. Driving once a year, if that, and on unfamiliar roads with different rules and traffic regulations, can be a slightly queasy idea for me, especially since I don’t consider myself a confident driver – merely a competent one. Luckily enough, being a competent driver is usually enough, and, besides a couple of hairy situations on an icy coastal road in Iceland, not to mention the demolition derby that is driving in Los Angeles, we’ve enjoyed an incident-free driving experience while on holiday.

Which brings us to Oman. That morning, we settled into our usual routine – me behind the wheel; Ashley, who is without a driver’s license, in charge of navigation; and a pile of snacks between us. Our driving route over the next six days would take us south along the east coast of the country, inland towards the desert, and then up into the central mountains and back to Muscat. Our first destination: Bimmah Sinkhole, about 1.5 hours drive south of the city, and, according to people who write articles about sinkholes, one of the most beautiful of its kind in the world. 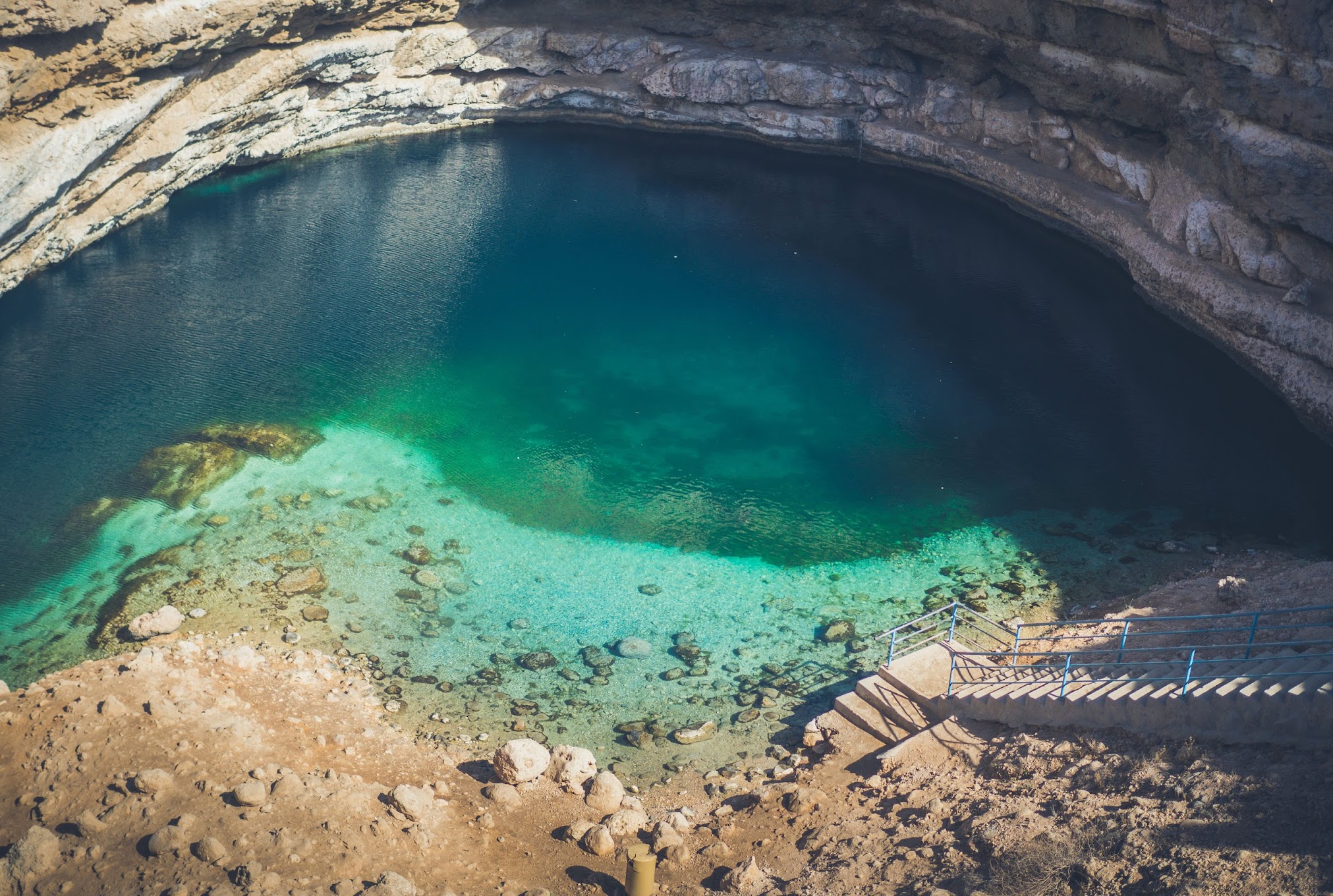 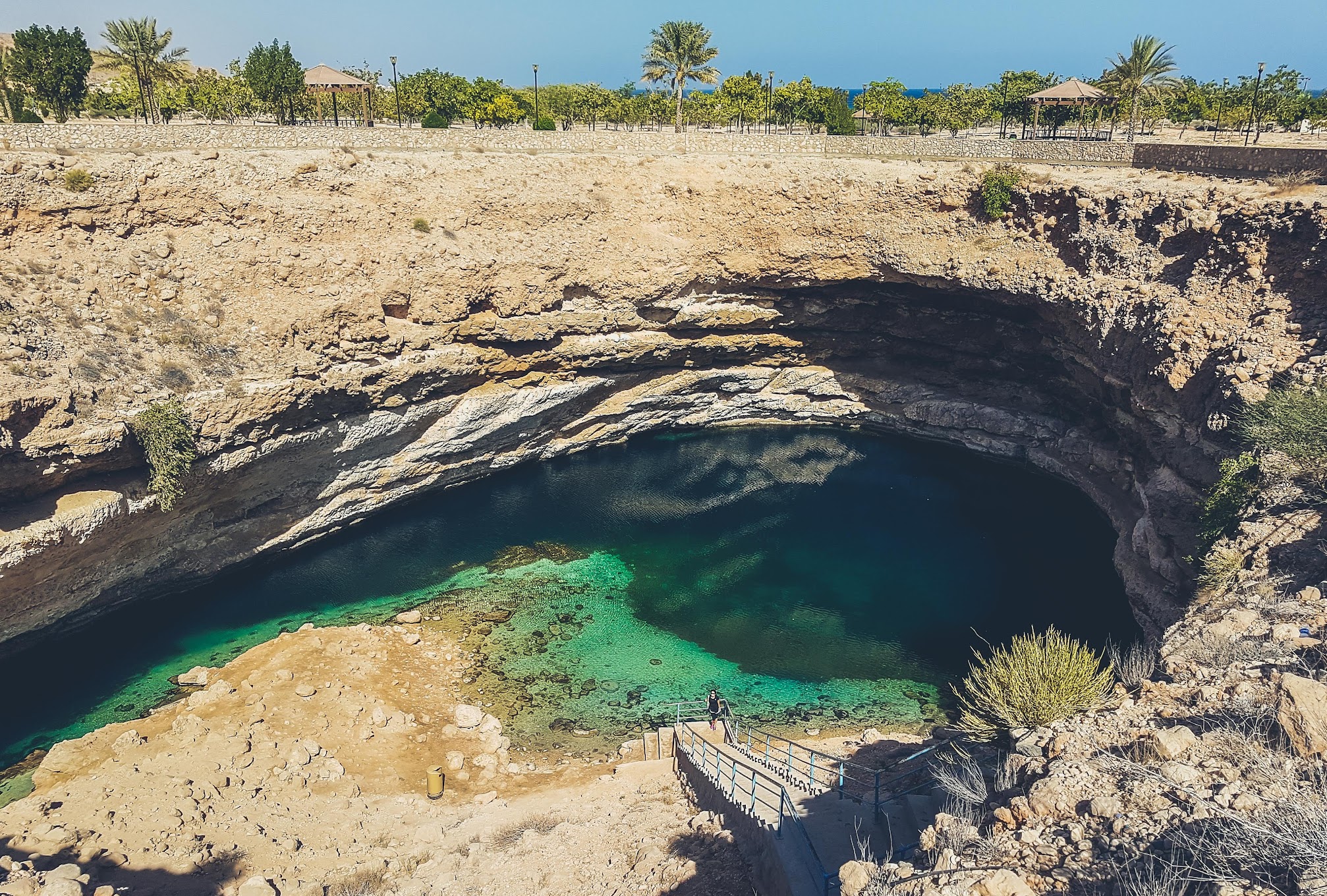 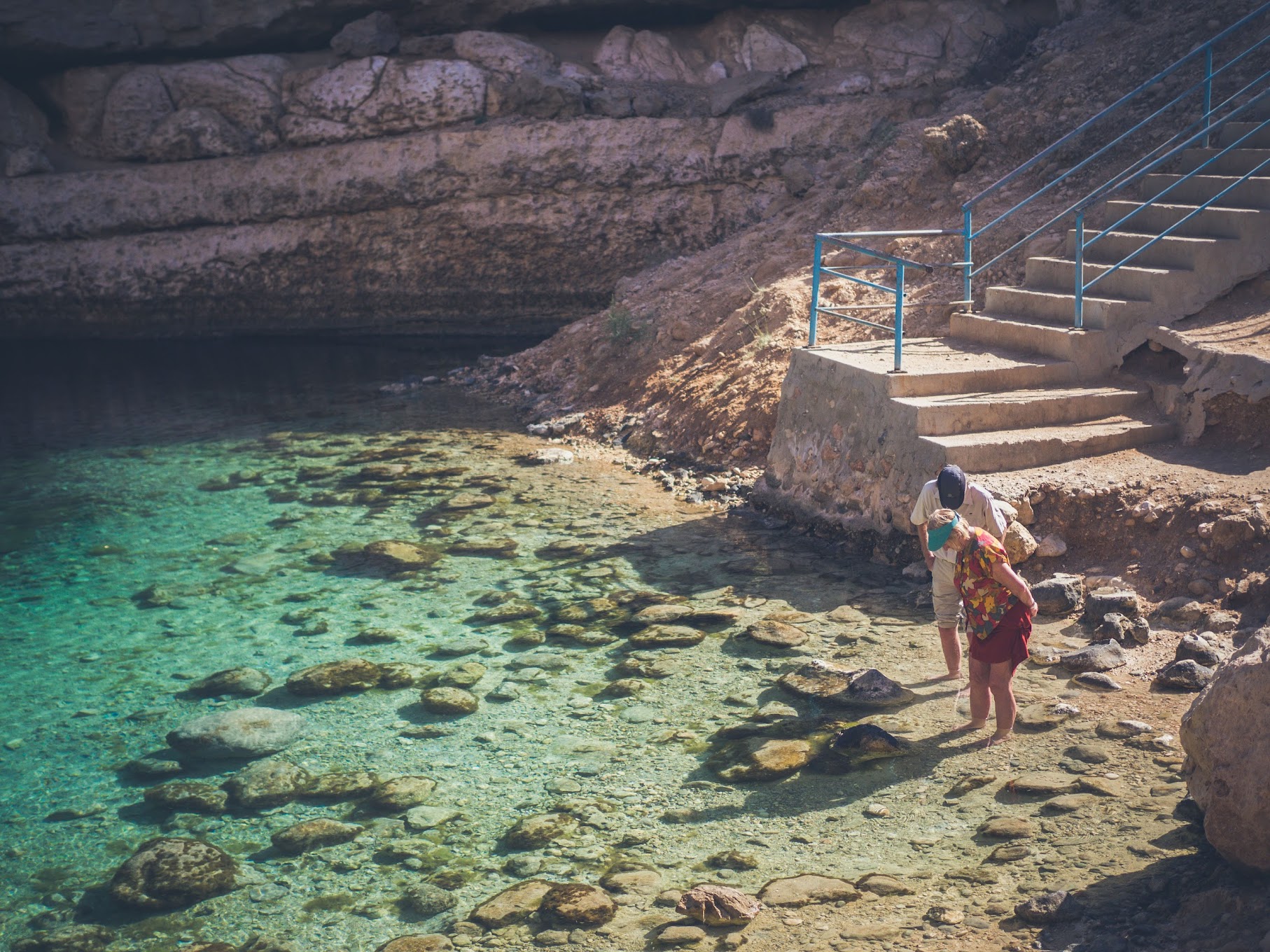 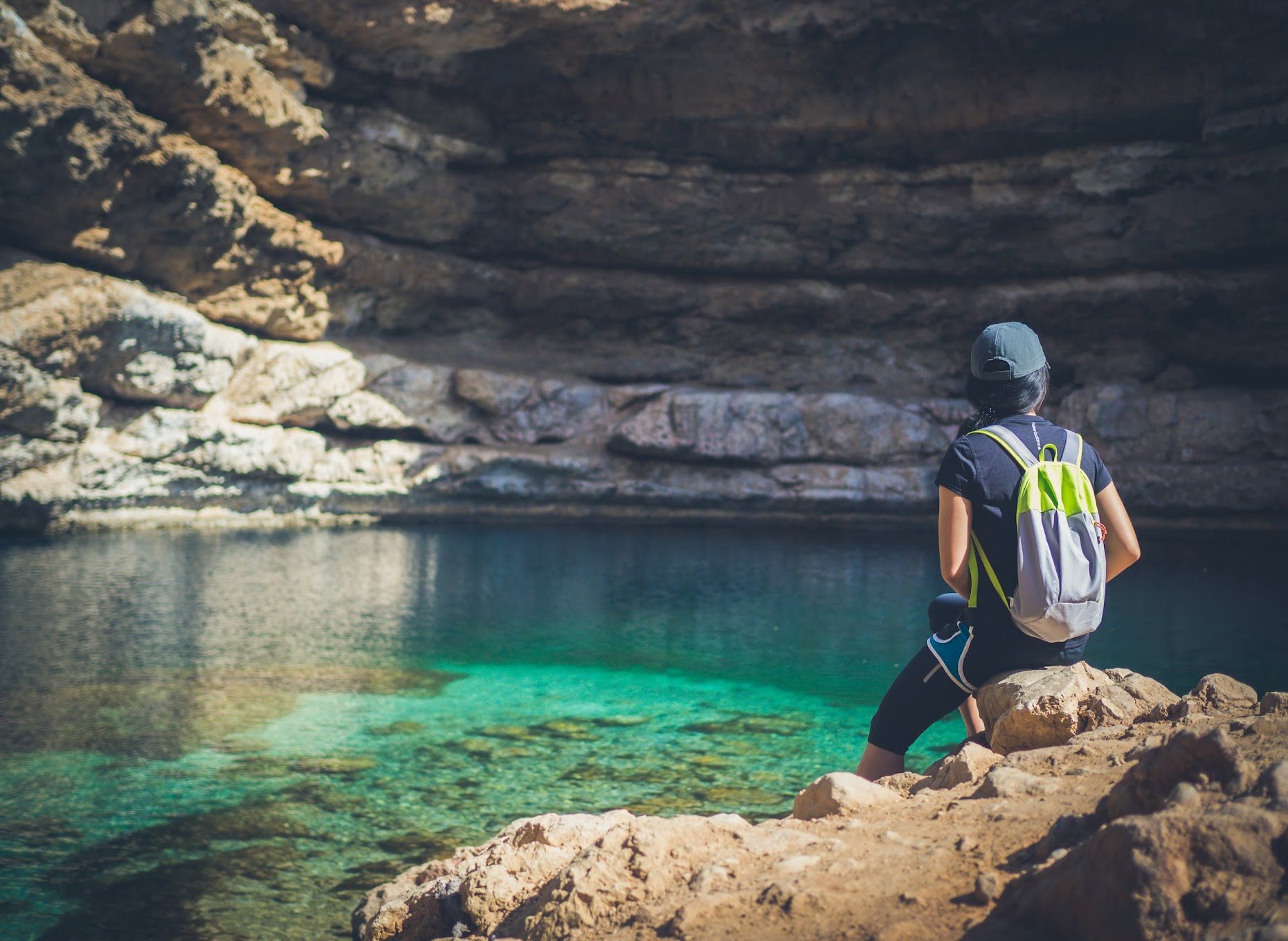 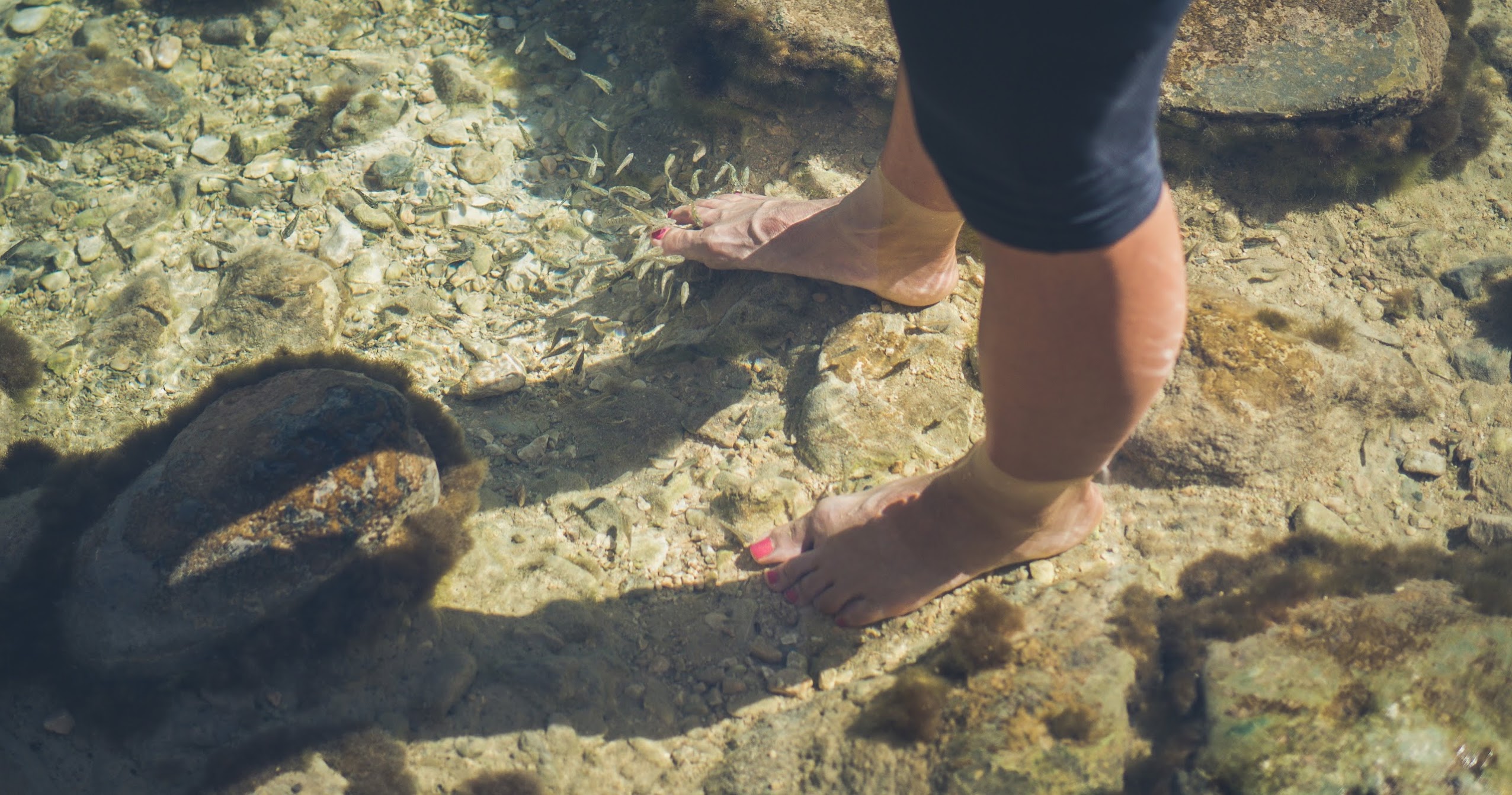 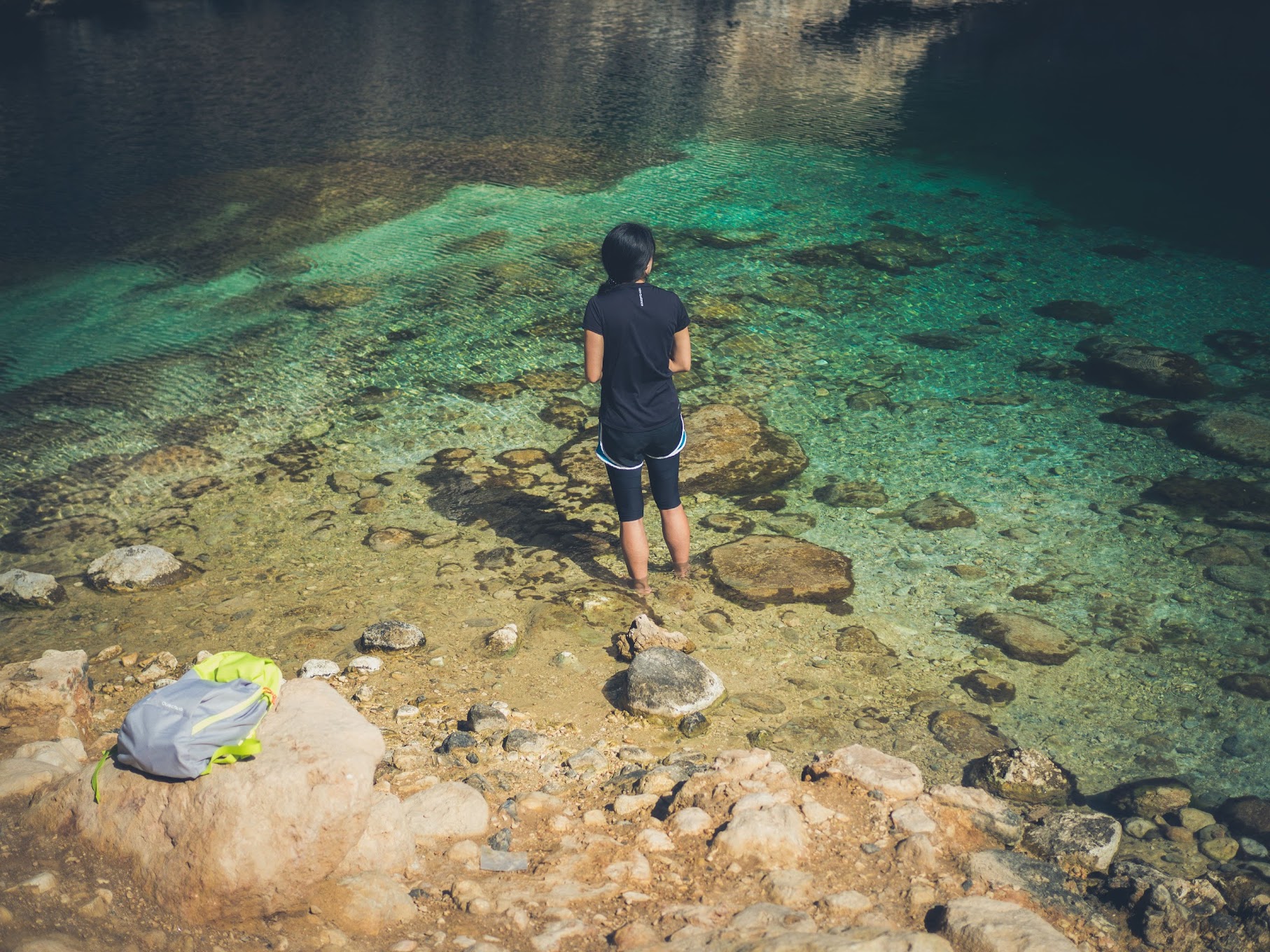 The southern route out of Muscat is a modern highway that snakes through the hills surrounding the capital before following the coastline southeast towards the old seafaring town of Sur. About halfway between the two urban centres, just south of the town of Dibab, is Hawiyat Najm Park, a small perfunctorily-landscaped area designed to showcase the park’s namesake – a sinkhole which in Arabic means ‘falling star’, hinting at local beliefs on the origins of the landscape feature. The actual origin of the sinkhole, more commonly referred to as the Bimmah Sinkhole outside of Oman, is much less interesting, so I’ll stick with the falling star story.

One of the more delightful and pleasantly surprising things about the sinkhole is that it actually is as beautiful as it looks in photographs. The aqua-green waters really are that colour, and the red rock walls, layer upon layer, really do make a fantastic backdrop. I had my doubts prior to the trip, and even walking up to the sinkhole it doesn’t look like much – a dusty paved path leading to seemingly nothing and nowhere, and then, all of a sudden, there it is, opening up in front of your eyes like some kind of desert vision. The long set of stairs down to the water allows you to take in the many details of the sinkhole, step by step – the gradation in water colour moving away from the shore, the layered walls casting shadows across the pool, the small ripples as water flows in from subterranean sources.

There was only one other pair of tourists in the sinkhole with us when we first arrived, and they soon departed after about 10 to 15 minutes, leaving us alone with the natural wonder. The cool waters beckoned us in, and we did dip our toes for a while, but we had other stops to make after Bimmah Sinkhole, and we weren’t too keen on driving around in wet clothes. Thinking back now, we probably could have gone swimming for a bit, allowing the sun to dry us off afterwards, but hindsight is 20/20, and it’s not something that I dwell upon, post-trip. It was a stunning sight, one that I was glad to have to ourselves that morning, and the perfect way to start off our road trip in Oman. 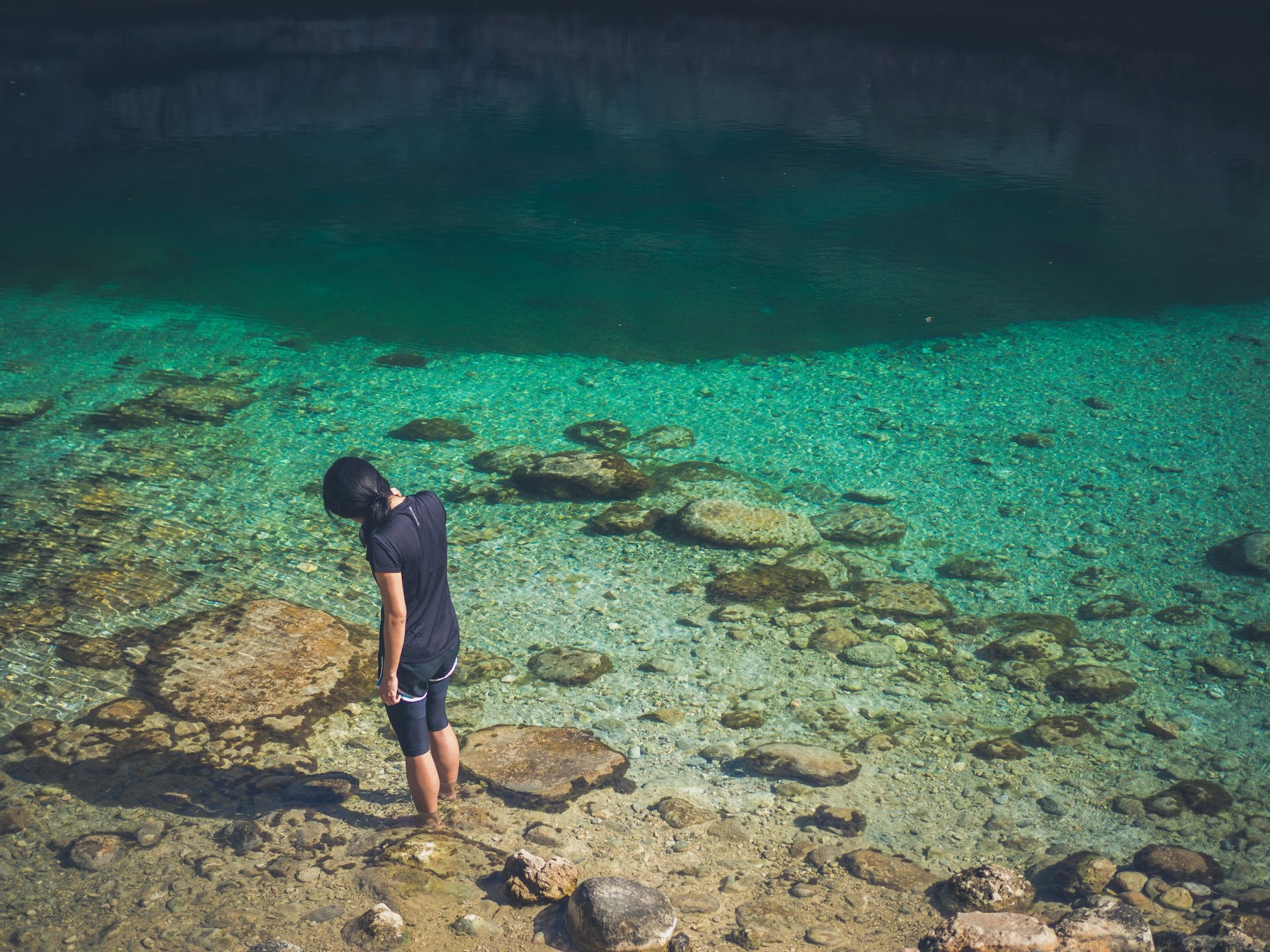 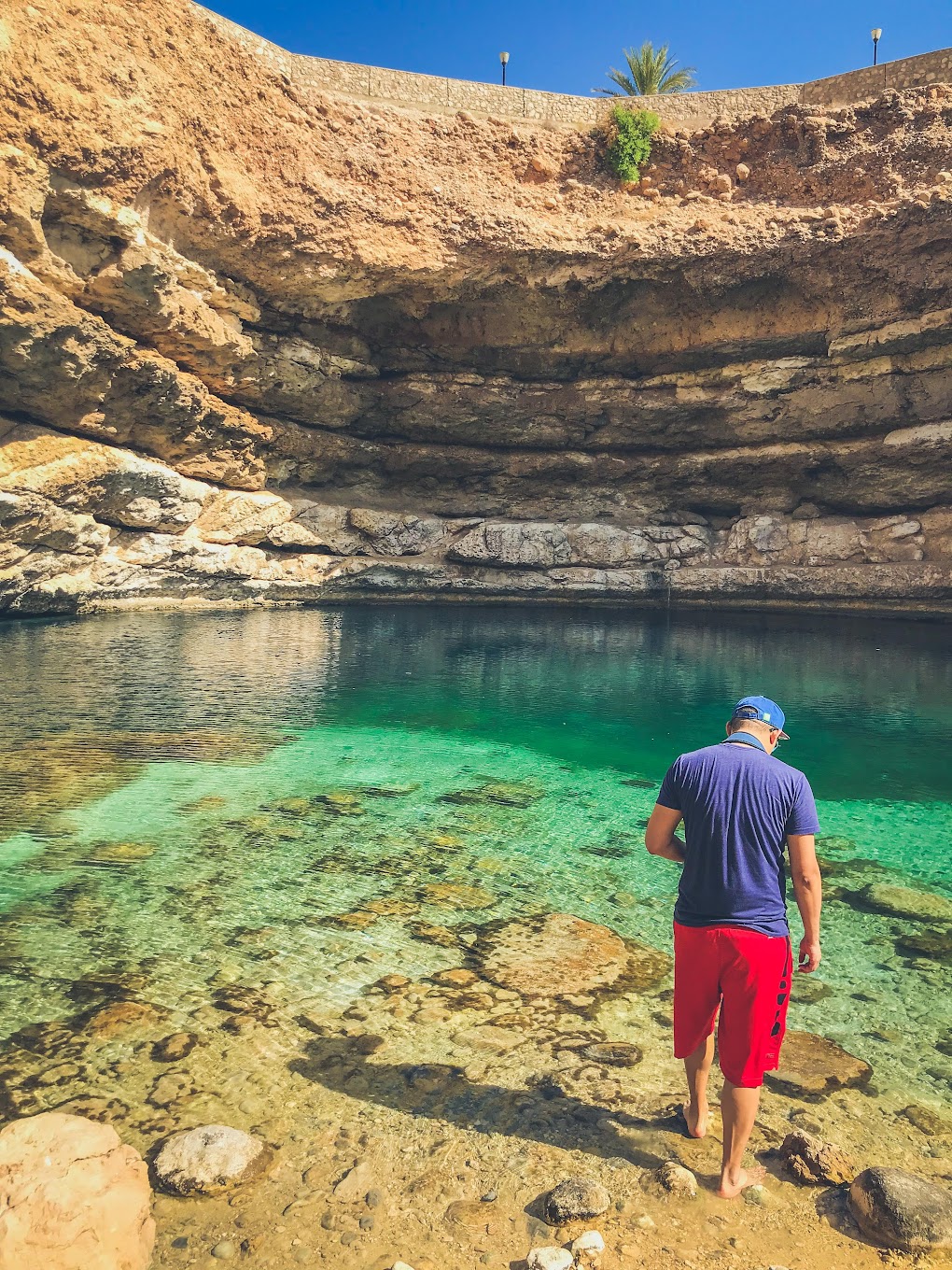 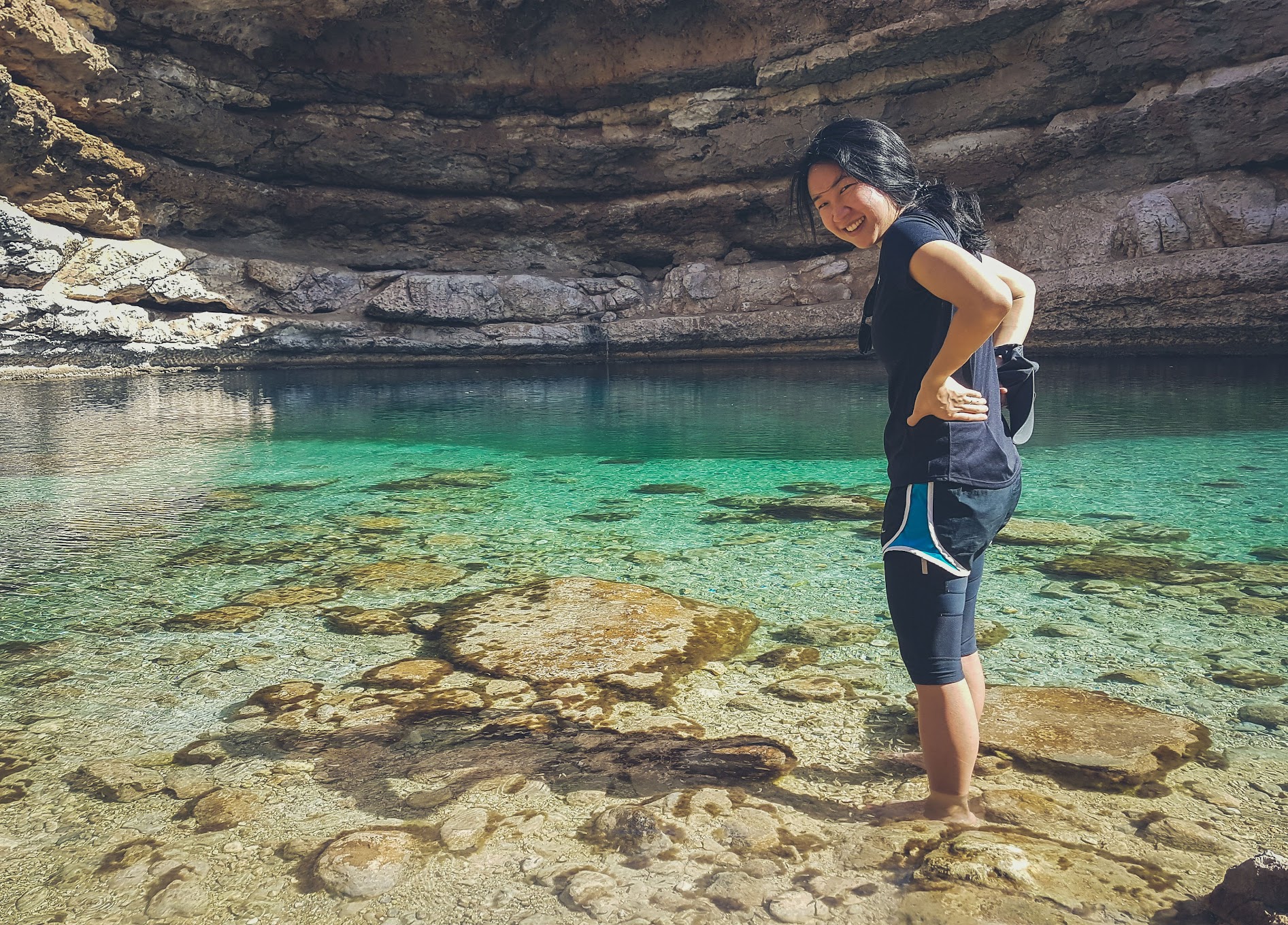 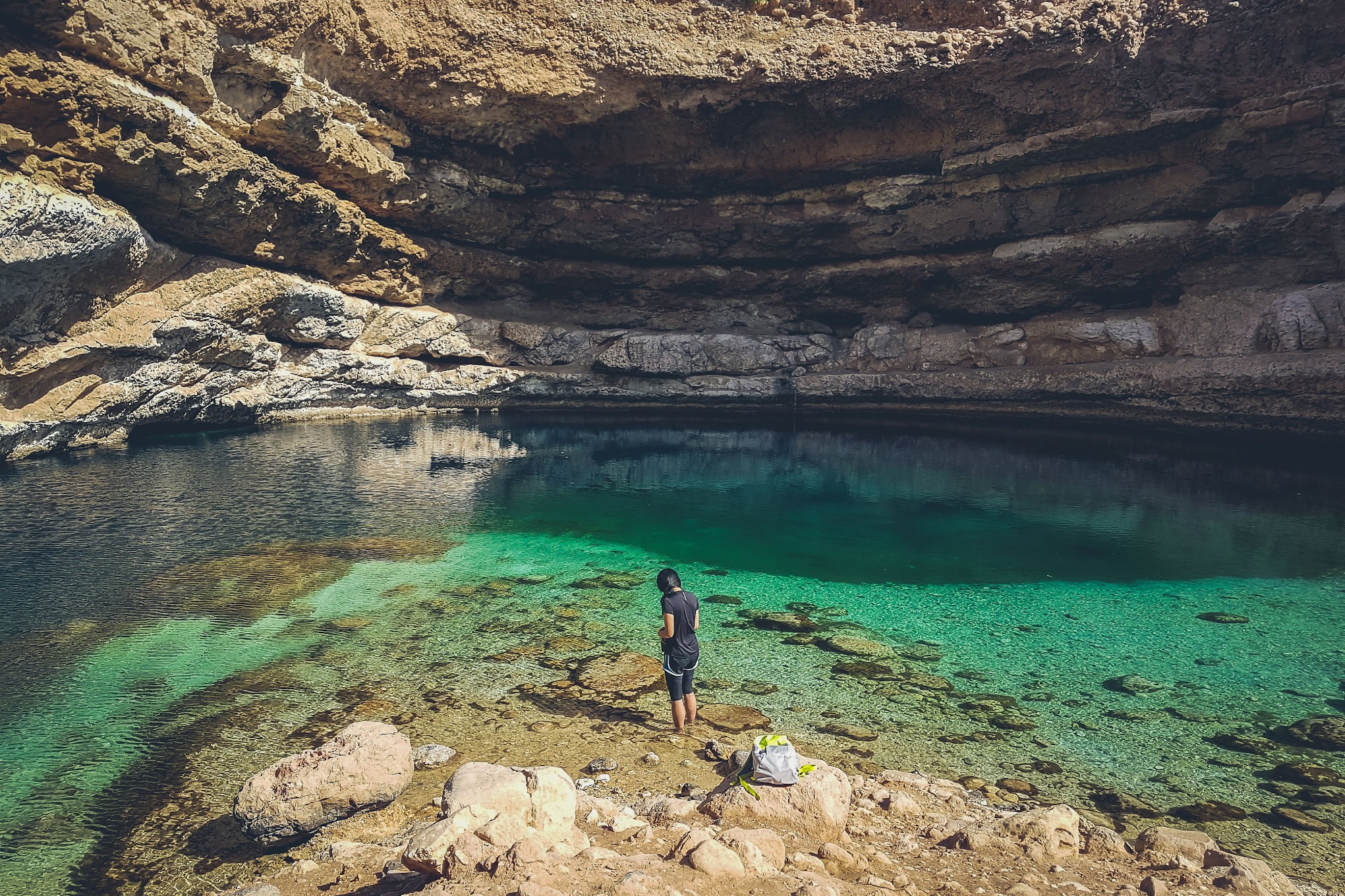 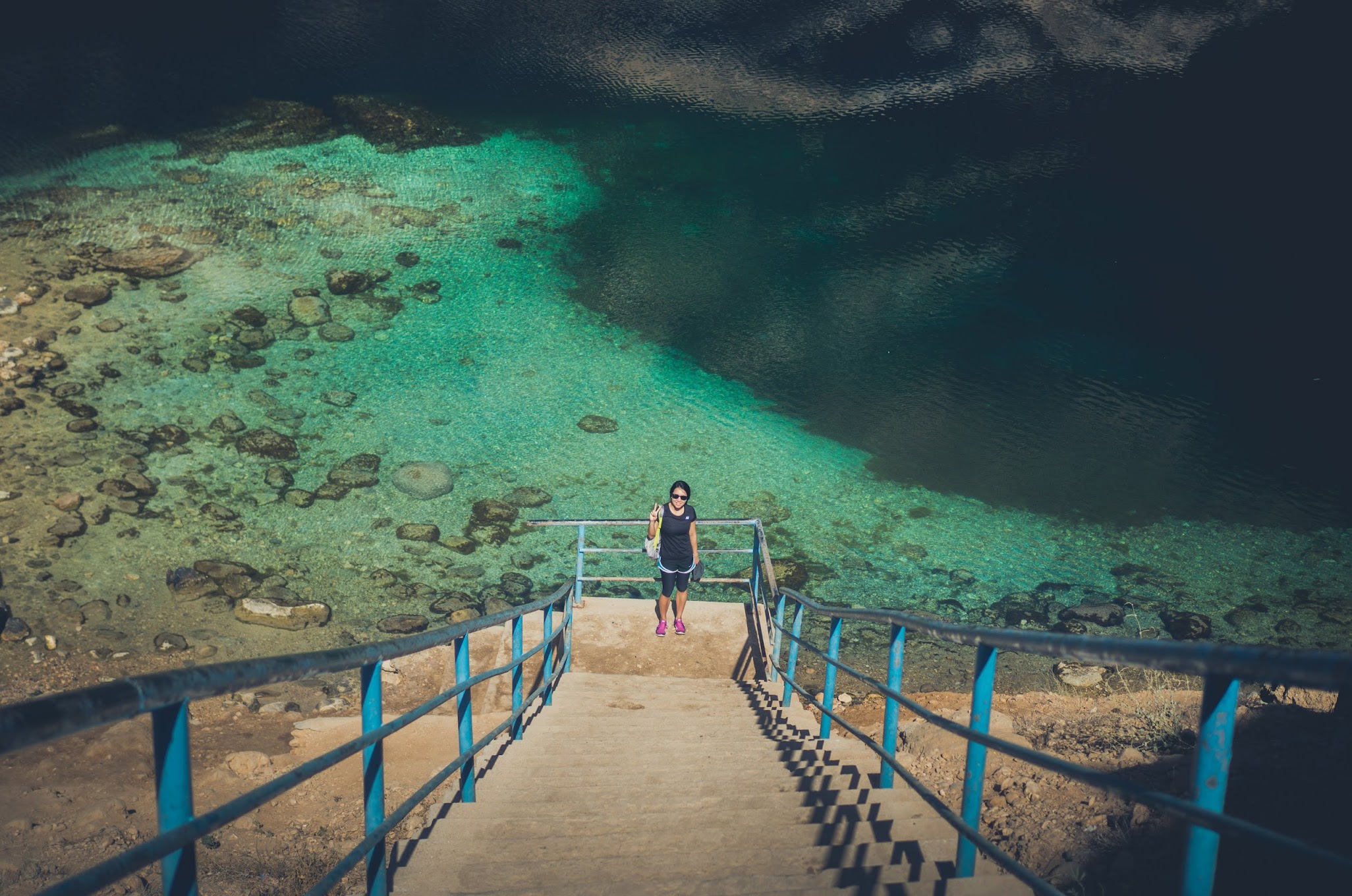 After about 30 to 40 minutes on our own, we hiked back up the stairs to our waiting vehicle. As we were leaving, another group arrived, and it seemed the proper order of things – one group making way for another to enjoy the park on its own. We could have stayed longer, but there was something else we were looking forward to doing, and would likely take the remainder of our day. Bimmah Sinkhole was eye-popping, no doubt, but the main part of our itinerary that day was a well-known canyon hike leading inland, past villages and dry river beds, through lush date palm groves and overlooking rocky gorges, until you reach a set of pools leading to a hidden cave with a waterfall – it sounds too good to be true, but everything is as described. I am, of course, talking about Wadi Shab. 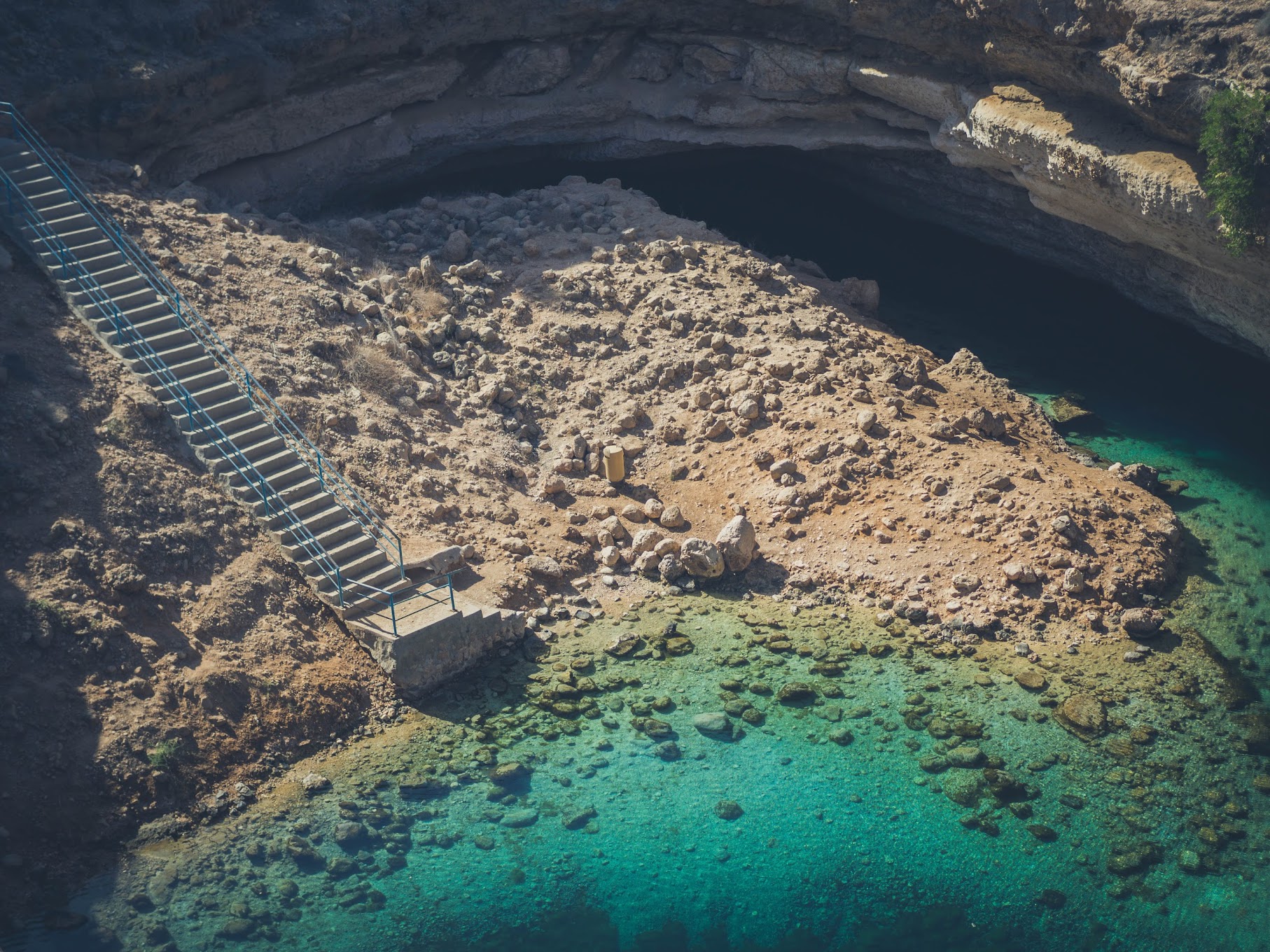