Scattered in a wide arc along the blue margins of the East China Sea, between Taiwan and Kyushu, lies the tropical archipelago of Okinawa, the southernmost prefecture of Japan. Annexed in 1872 and made a full prefecture in 1879, Okinawa has long been a popular holiday destination in the region for travelers looking for golden beaches, aquamarine waters, secluded diving spots, and a taste of the unique Ryukyuan culture. As an added bonus, the capital city of Okinawa, Naha, is only a short 2.5-hour flight from Hong Kong. Ashley and I began playing around with the idea of visiting Okinawa soon after returning from our Toronto and Vancouver trip in early August. We’d traveled to Japan twice already in 2015 (Niseko and Tokyo), falling harder and harder for the country on each subsequent trip, and after we confirmed the details of our October trip to Shanghai, we quickly booked Okinawa for November.

On one of the last weekends of the fall, we flew out from Hong Kong International Airport yet again, arriving in Naha in the early afternoon. We decided to stay at the Rizzan Sea-Park Hotel Tancha Bay, located near Onna in the Kunigami District, about an hour’s drive from the capital, due to its location near the midway point of the island. It’s one of those big, anonymous hotels popular with families and local visitors, and it served our simple purposes – sleep and eat – just fine. To get there, we made an online booking through the Europcar website, taking the short shuttle bus ride from the airport terminal to their office to pick up our rental vehicle. I grew up driving on the right-hand side of the road in Canada, and, in all my years in Hong Kong, I’ve never taken the wheel once, so this was my first experience driving on the left side. It was a bit hairy at first, adapting my driving rituals and safety checks to mirror everything I’ve ever known about being in a car (I was still turning on the windshield wipers instead of signaling when we dropped it off a few days later), but, thankfully, the traffic was relatively forgiving, and we pulled into the hotel parking lot an hour later without any major incidents. When we checked in at the front desk, the concierge handed us our mobile WiFi device from Global Advanced Communications, a company offering a range of mobile phone, sim card, and Wi-Fi services across the country. I booked the reasonably-priced device through their website a few days in advance, choosing to have it delivered to our hotel for easy pick-up, and I can’t imagine traveling in Japan without it.

By the time we had settled into our room, there wasn’t much daylight left, so we hopped into our car and drove a short distance up the coast to a restaurant called Umimonogatari to sample some of the local fare. The cuisine in Okinawa differs a fair bit from the food you’d expect to find on the main Japanese islands, a combination of its own culinary traditions and influences from China, Japan, and the United States. That evening, while live musicians sang and performed local Ryukuan folk music on a small stage at the back of the restaurant, we dined on umibudo, a type of seaweed resembling miniature grapes, mimiga, thinly-cut, boiled pig’s ear with ponzu sauce, and the infamous goya champuru, a polarizing Okinawan stir fry dish with bitter melon as the main ingredient. 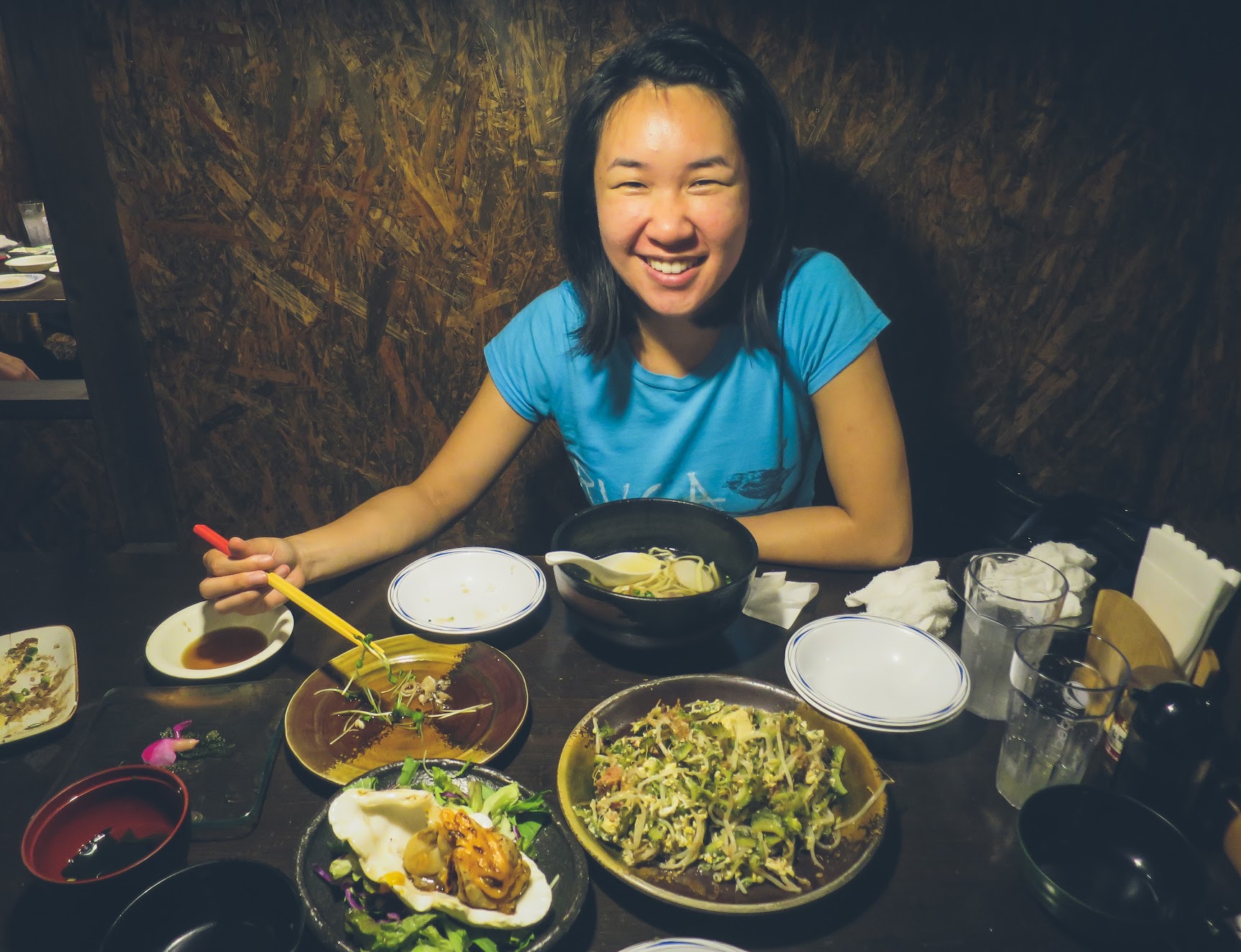 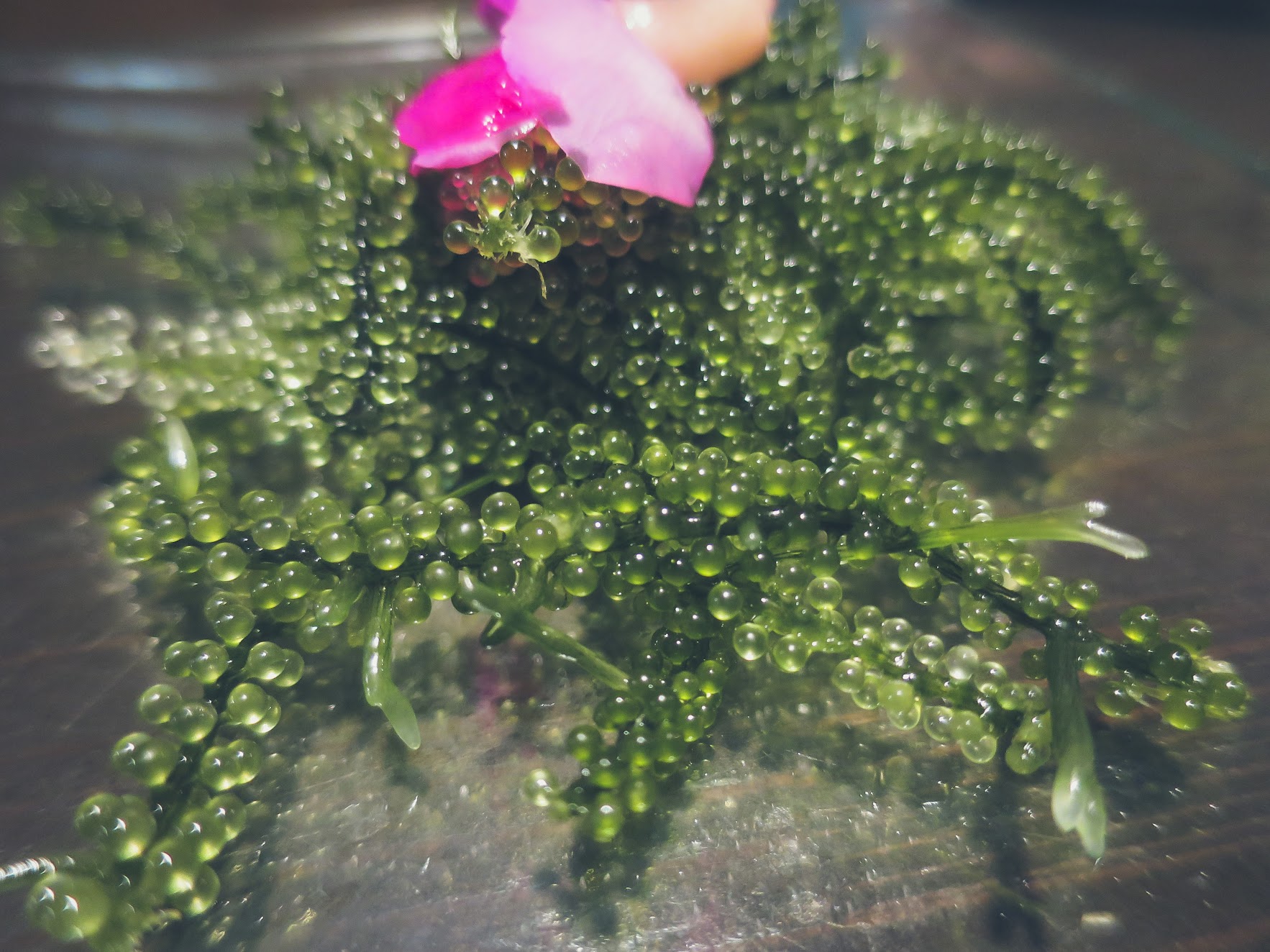 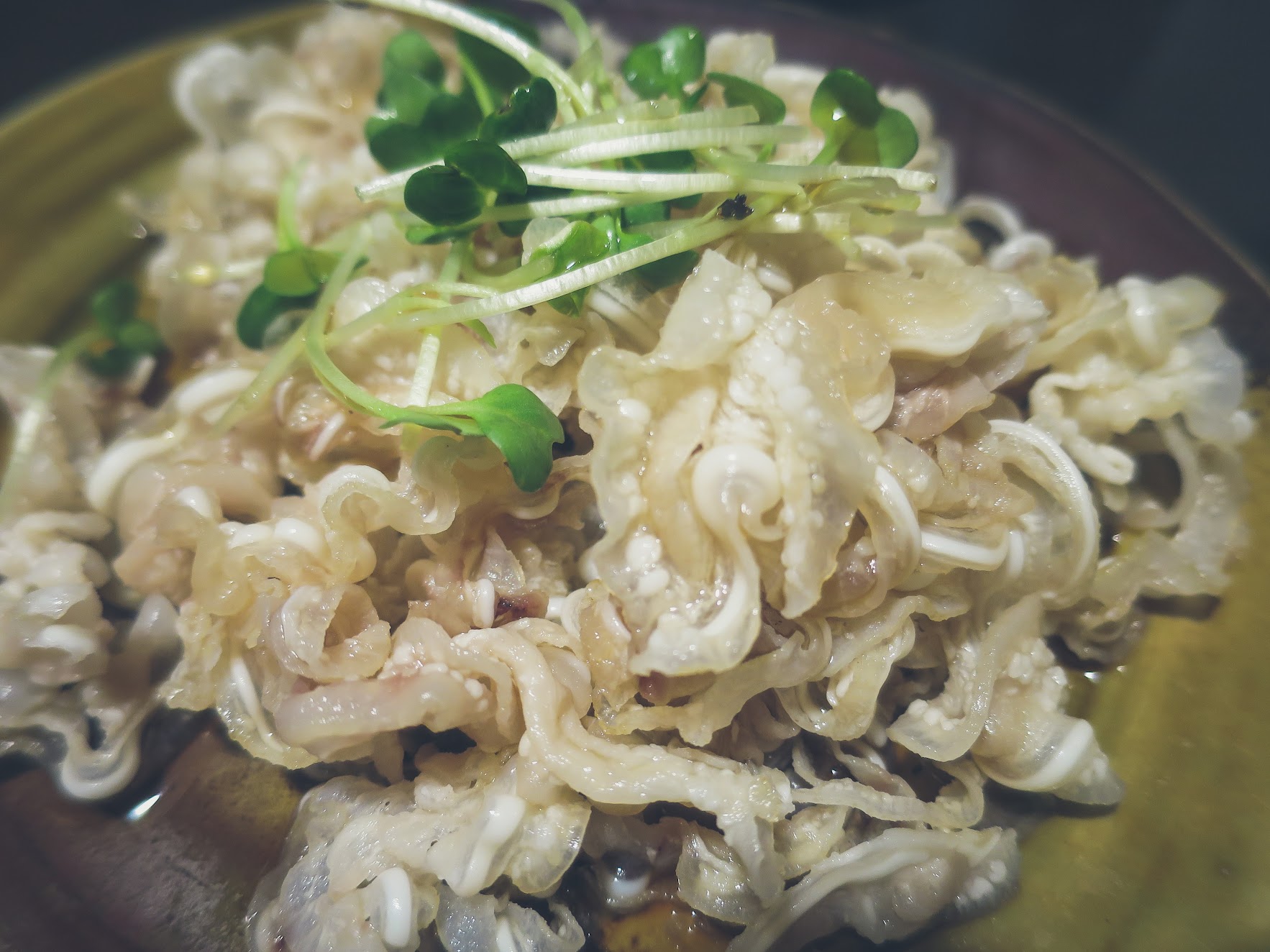 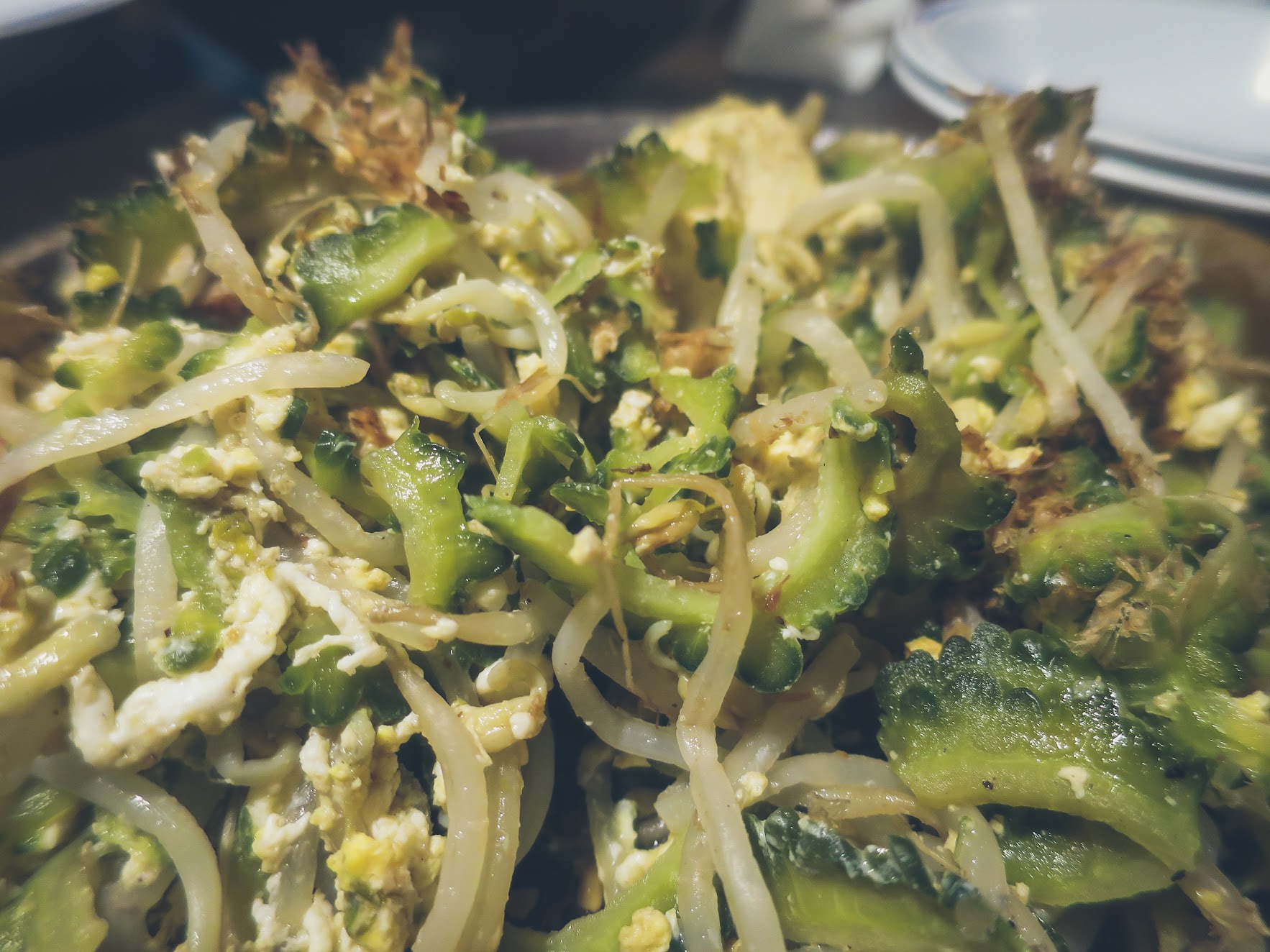 The next morning, we snaked along the western coast of Okinawa to the Motobu Peninsula, home of the impressive Okinawa Churaumi Aquarium. Re-opened in 2002 after significant renovations, it was once the largest aquarium in the world, and tourists flock from all across the Pacific to marvel in front of its main attraction, the 27 x 74 ft glass panel looking out onto the enormous Kuroshio Sea exhibit. The drive itself was pleasant enough, with relatively little traffic until we approached the town of Motobu, and the brilliant skies and shimmering ocean to our left were a welcome distraction during the 1-hour journey to the north. As the morning wore on, however, the tropical sun began to press its advantage, and the cool hallways of the aquarium were a welcome reprieve when we finally arrived at our destination. There are a wide variety of exhibits at Churaumi, including dolphin shows, sea turtle pens, manatee pools, and all manner of coral-filled tanks flush with colourful fishes, but all foot traffic comes to a halt at the Kuroshio Sea, a massive, 7,500-cubic meter tank and home to the aquarium’s most famous residents: a small group of captive whale sharks. As the gentle behemoths glided through the water, one after another, the human visitors looked up in wonder at the world beyond the glass panel, faces cast in the swirling blue shadows of the underground sea. Only after the spell had worn off did we pay any mind to the other creatures in the water – the manta rays and other fish who lived and swarmed in the spaces above and below the largest fish species in the world. 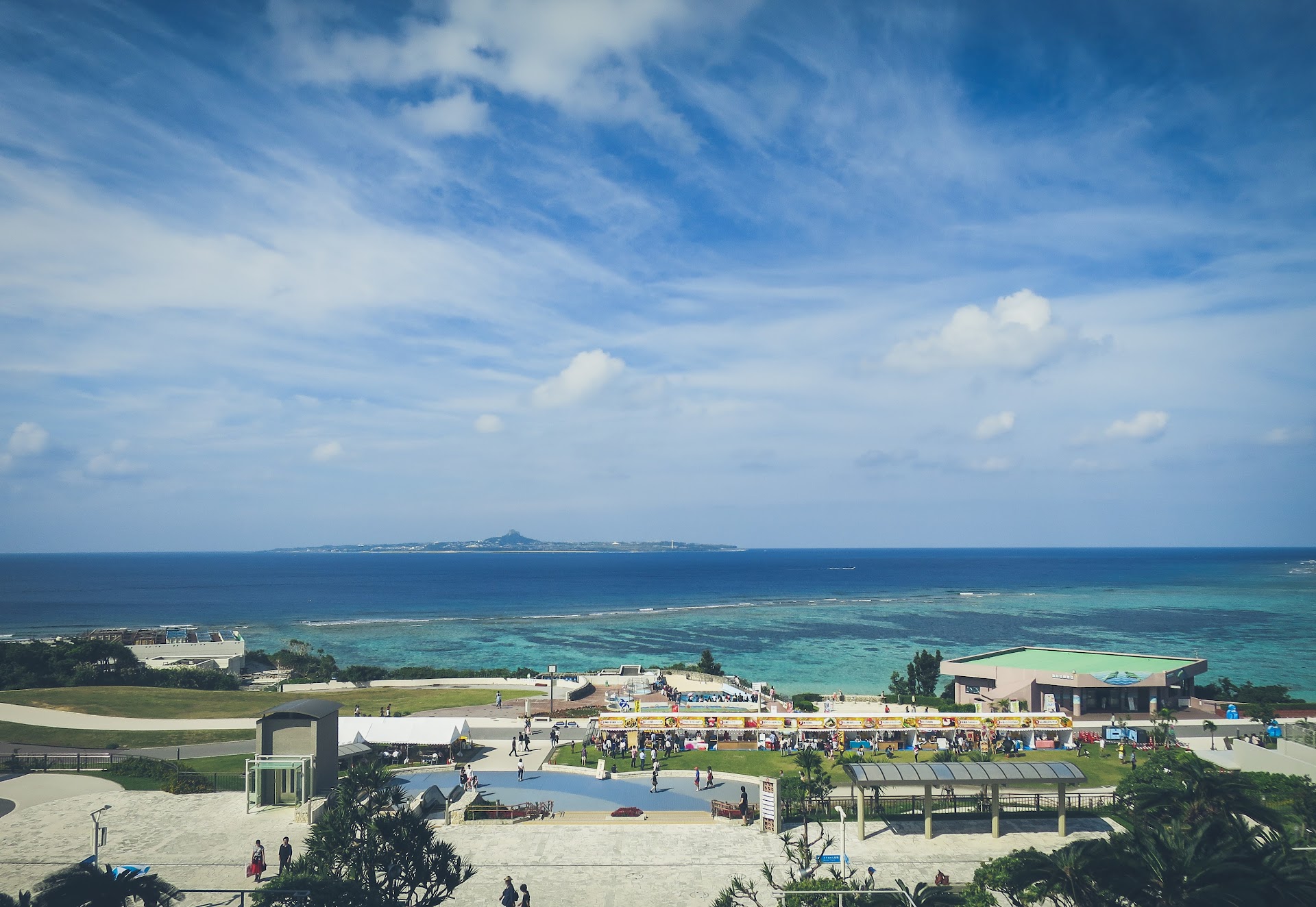 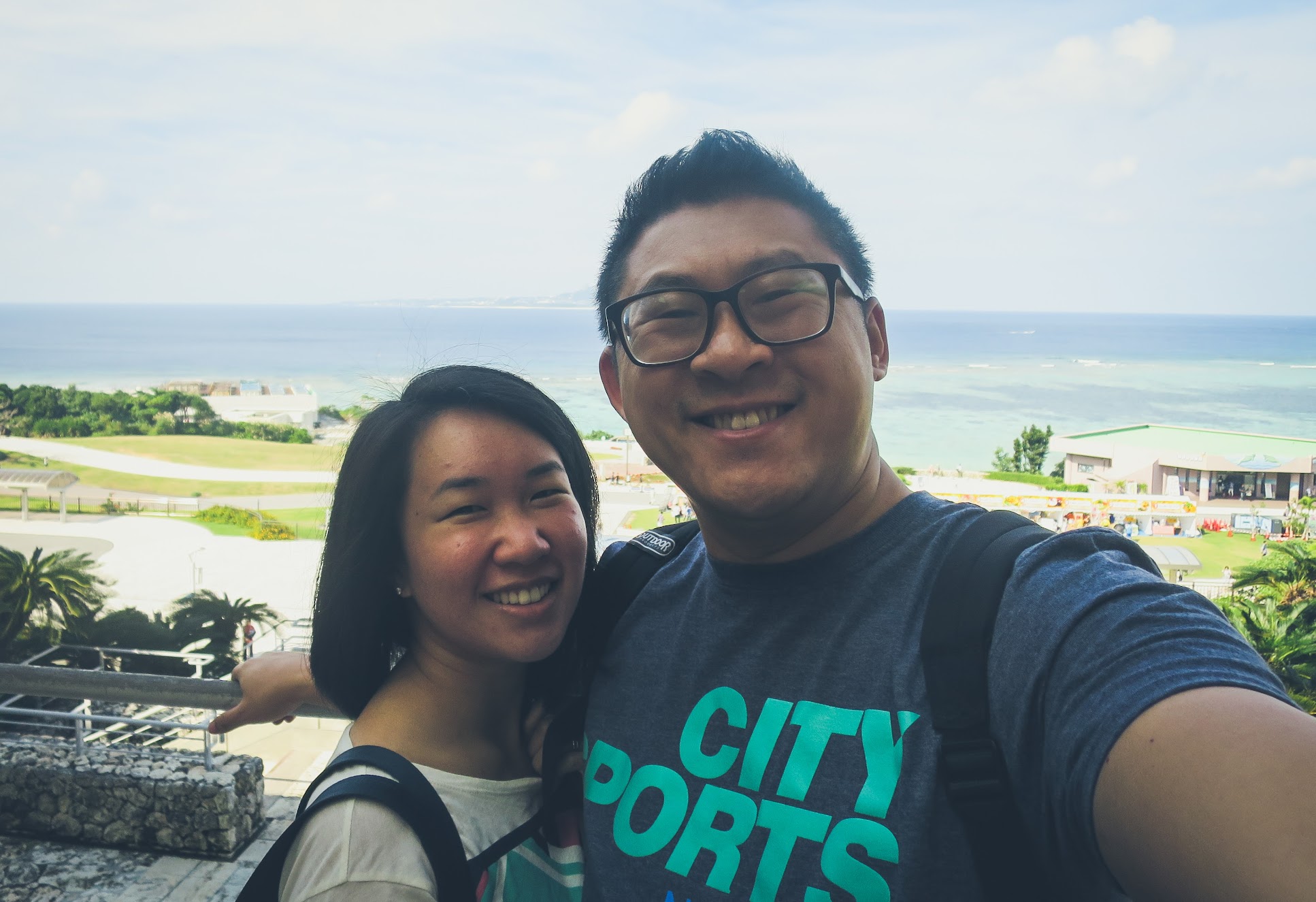 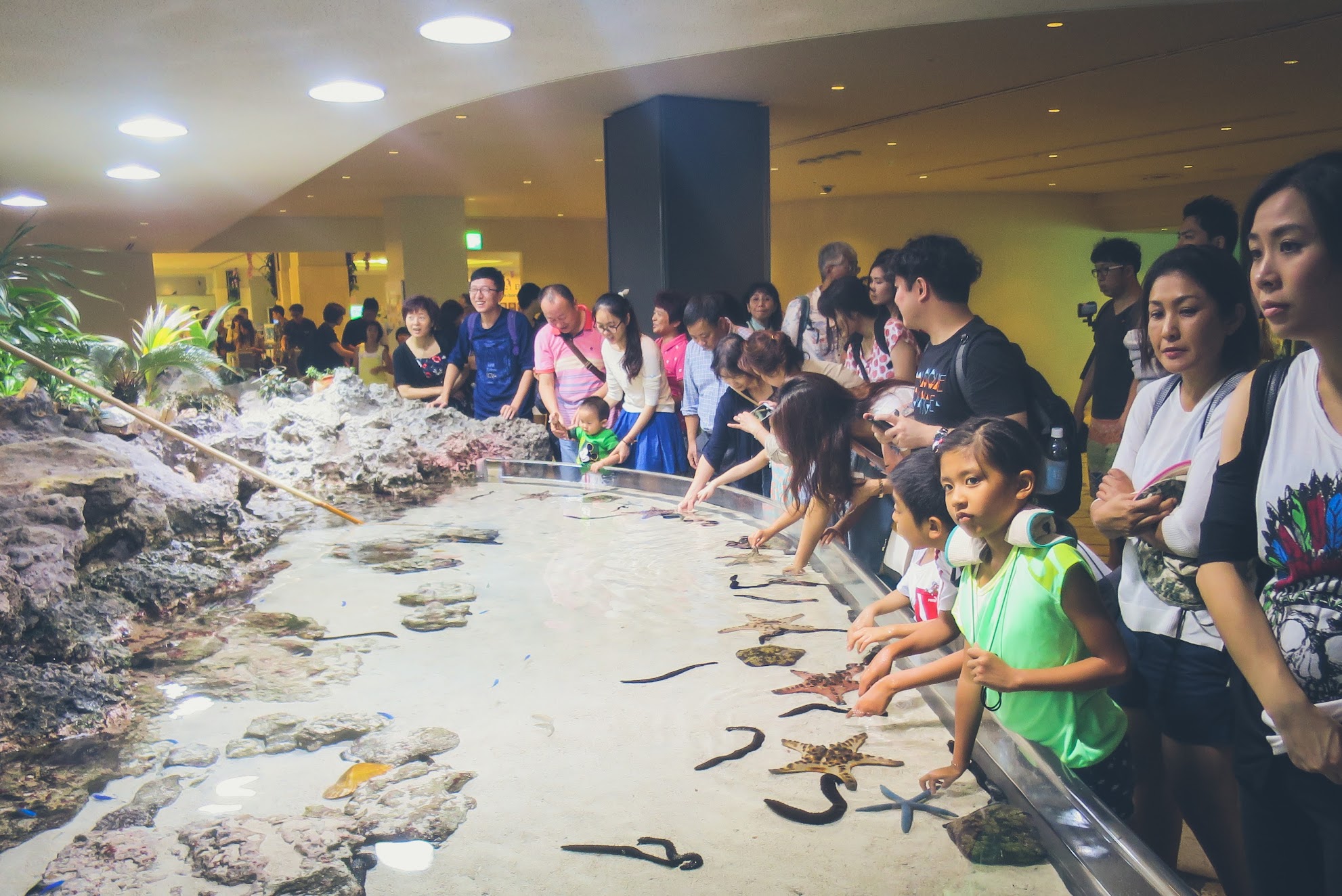 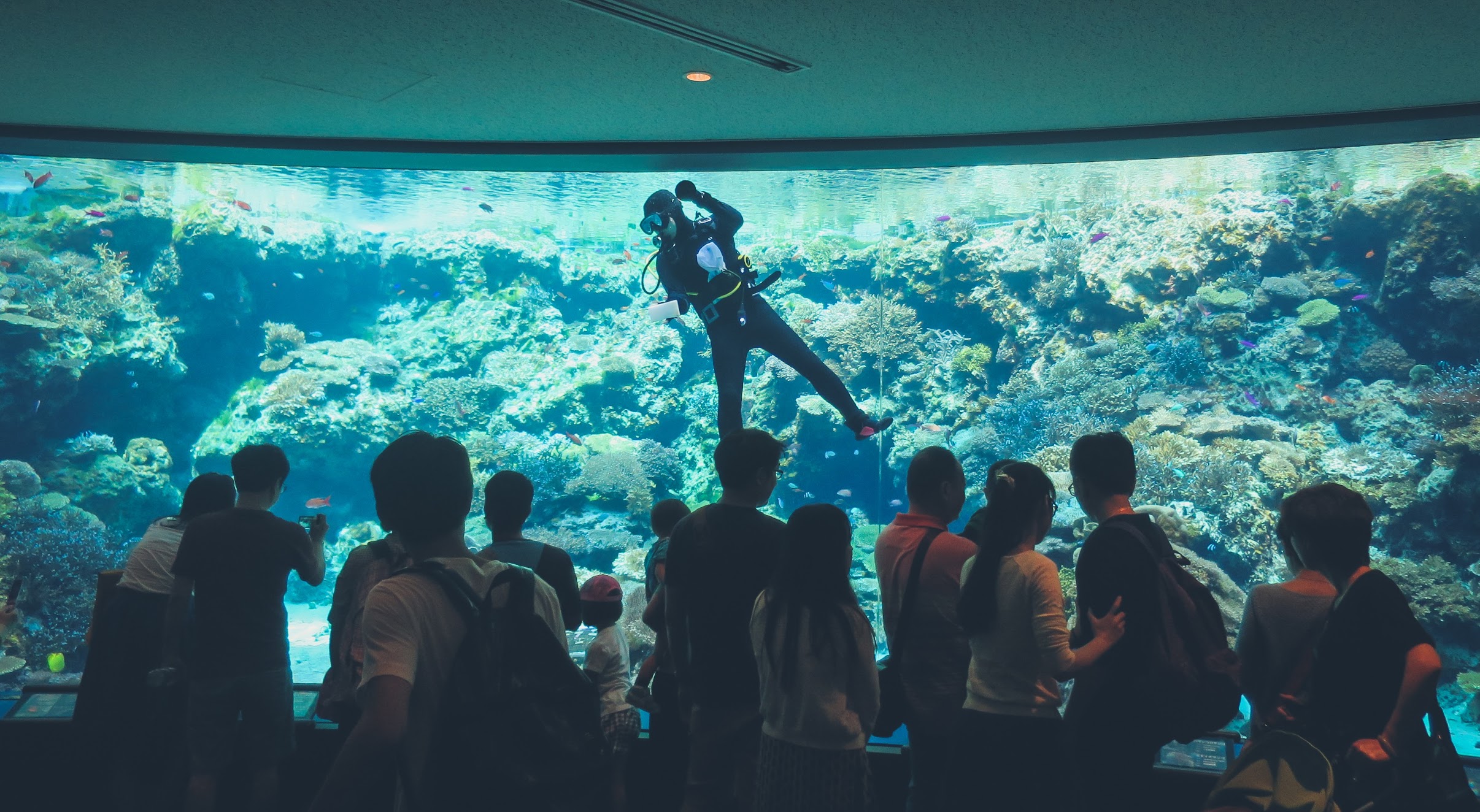 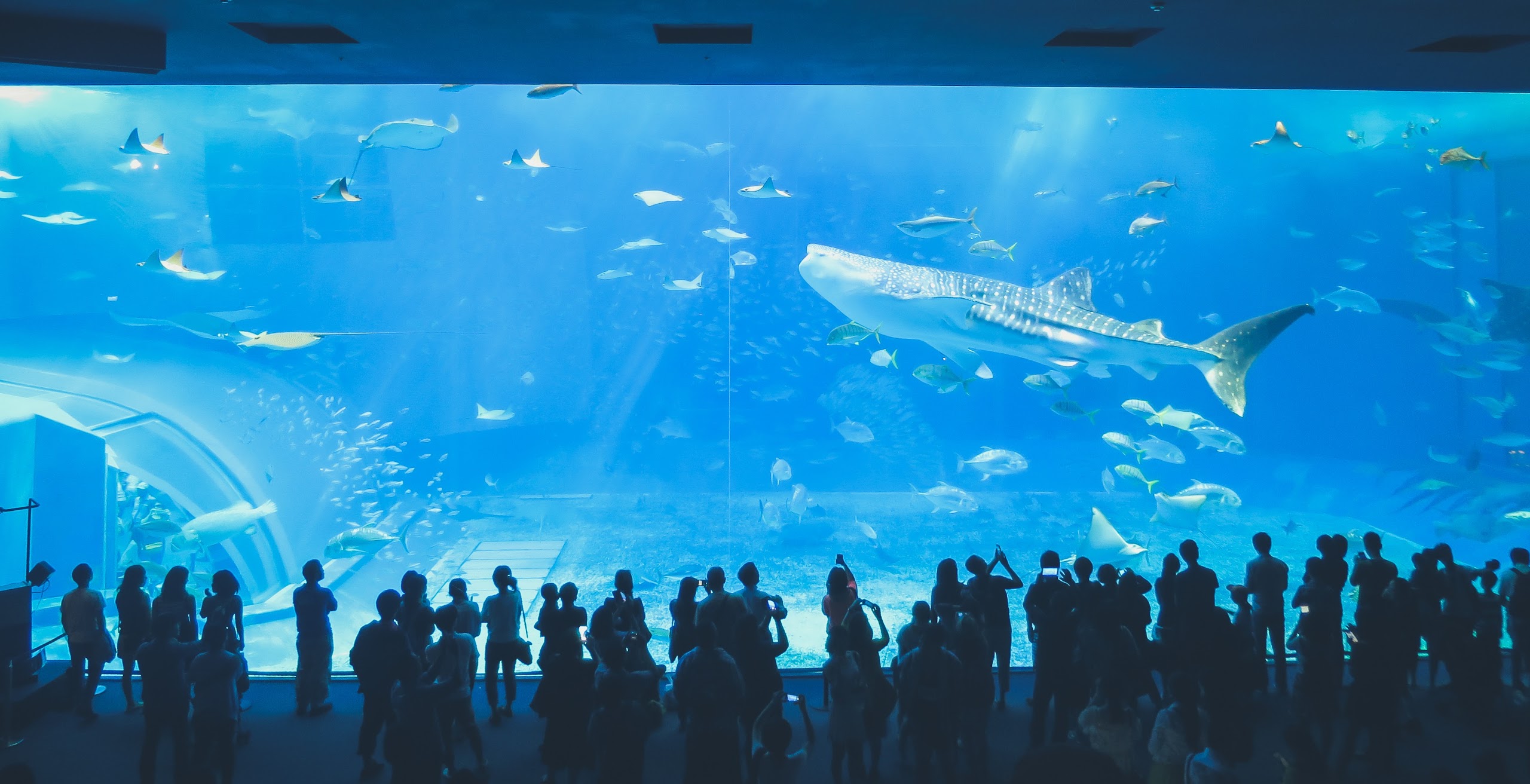 From Churaumi Aquarium, we drove down to the town of Nago, at the southern end of the Motobu Peninsula, to grab lunch at a small restaurant called Yukino. We had read that the lunch sets there were decent and reasonably priced, and it had something called goat sashimi that I was curious about (Ashley less so), plus the location fit nicely into our itinerary for the rest of the day. Finding the restaurant took a bit of work, but we stumbled across it soon enough, the server leading us from the shadowy entrance hall to an elevated, semi-private room, complete with low table and tatami mats. With the help of a friendly waitress, we managed to order a pork cutlet set to share, rounding off our order with plates of fish sashimi, salted pork, and raw goat. The goat sashimi ended up being not that great, a little too gamey for my tastes, but I can’t say it was unexpected either. Everything else was perfectly fine, not anything to write home about, but good enough for a cheap and filling meal. After finishing our teas and bowing out of the restaurant, we drove out of the parking lot and back onto the country roads, heading north towards the offshore island of Kouri, and the stunning bridge that connects it to the rest of Okinawa. 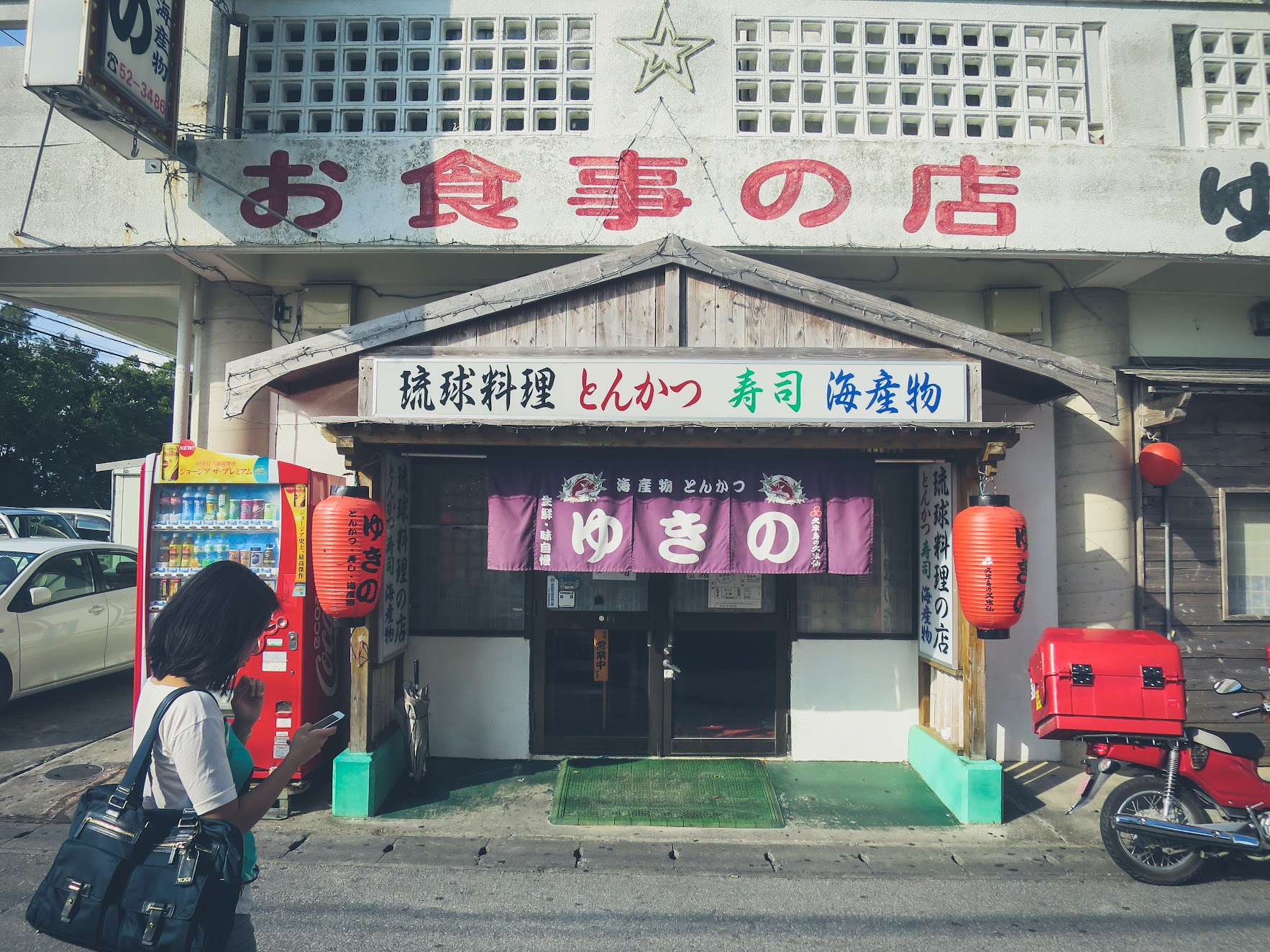 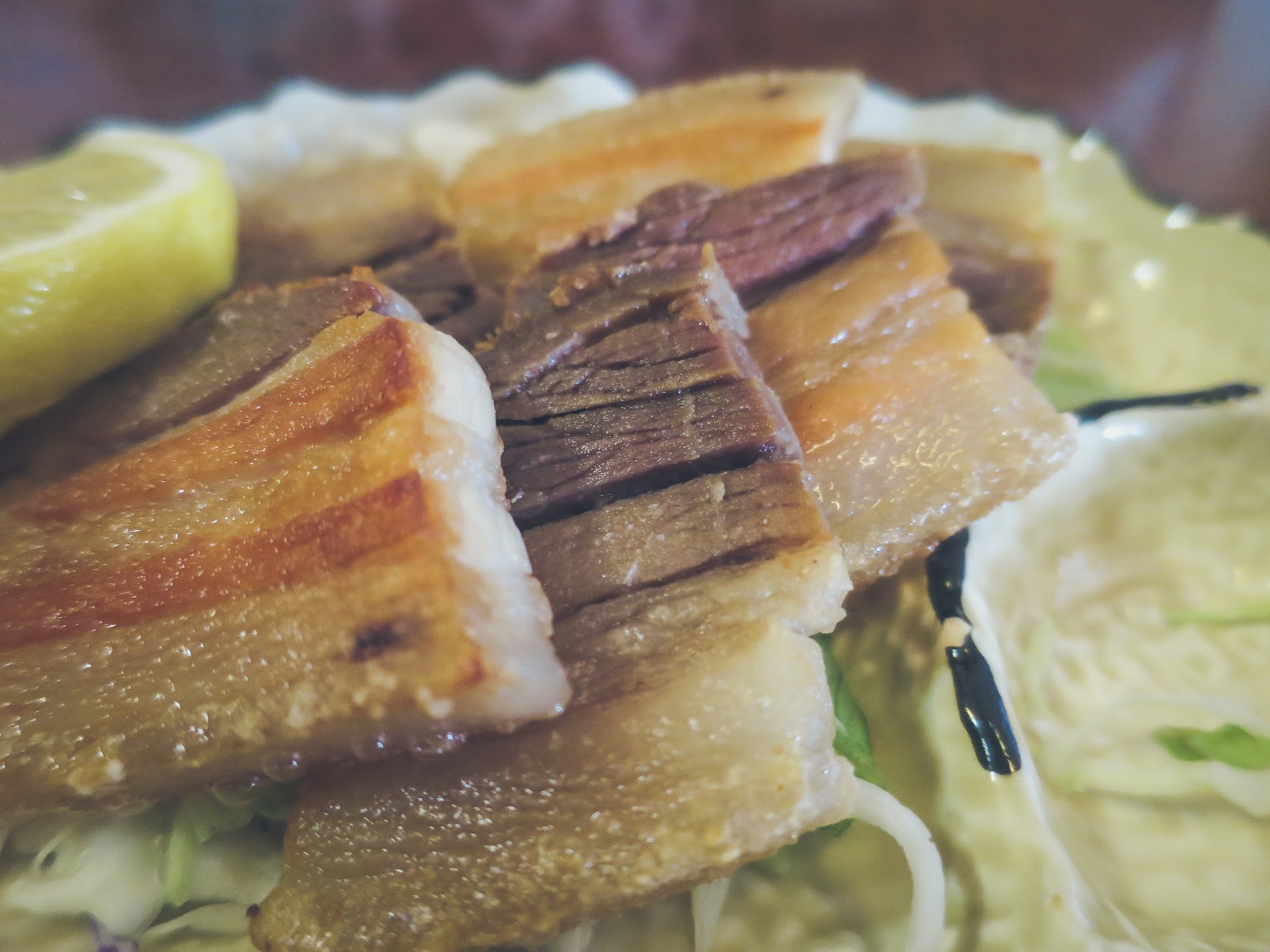 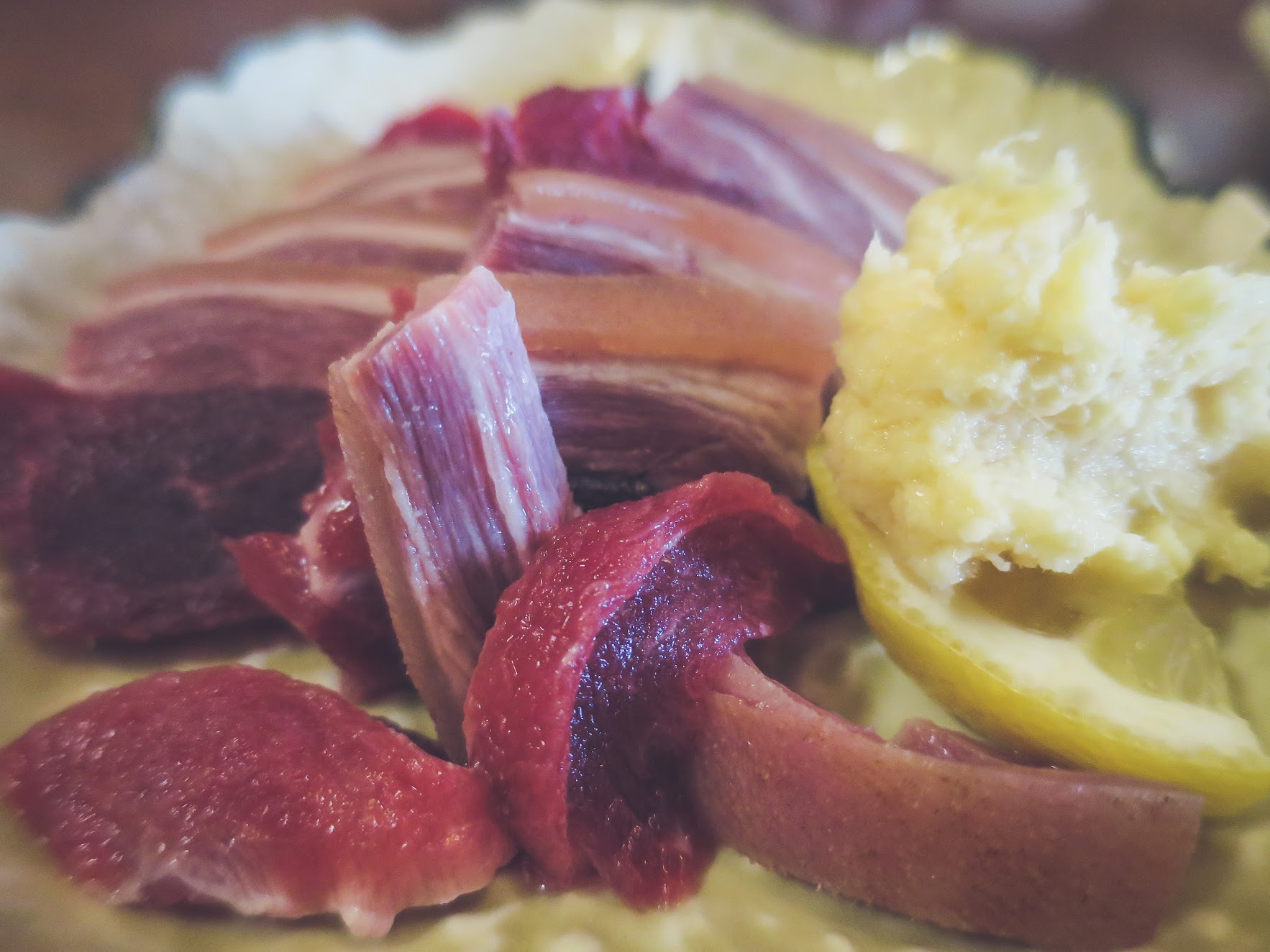 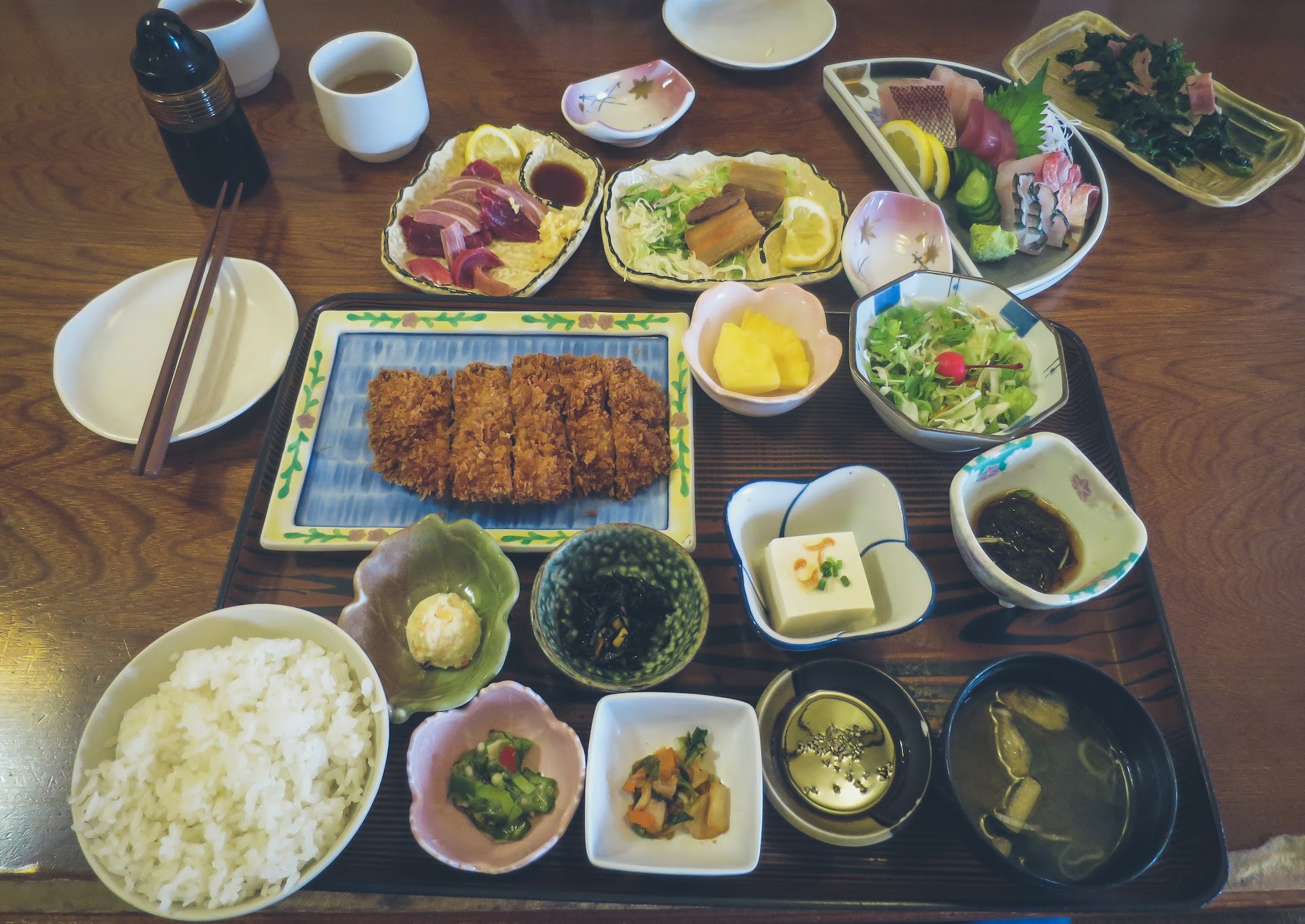 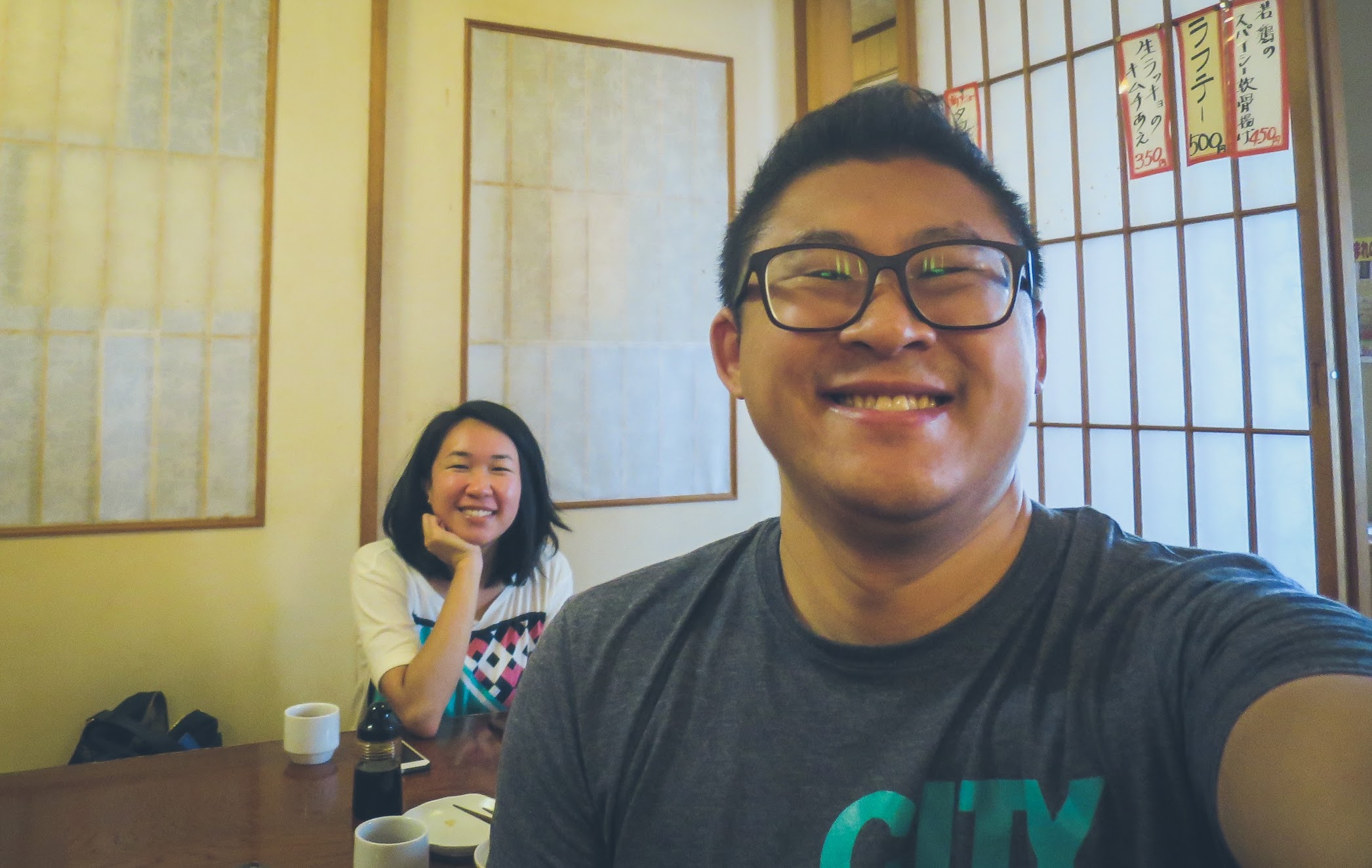 We had originally planned to make a circuit of Kouri Island, but the day was getting short and we contented ourselves with walking along the bridge that connects Kouri Island to Yagaji Island. The Kouri Bridge is the longest toll-free bridge in Japan, and its low, sloping profile seems to float on top of the narrow channel between the two islands. Coming from the direction of Yagaji Island, there’s a small, easy-to-miss parking lot to the left, just before the bridge, where you can stop and take a look around. From the parking lot, it’s a short climb to the bridge itself, and it’s possible to walk from one island to the other, if one were so inclined. We walked to about the halfway point before turning back, cars zipping by us on the narrow two-lane bridge, watching the rays of the setting sun catch the waves below and lighting up the scraggly profiles of islands left abandoned to the tides. 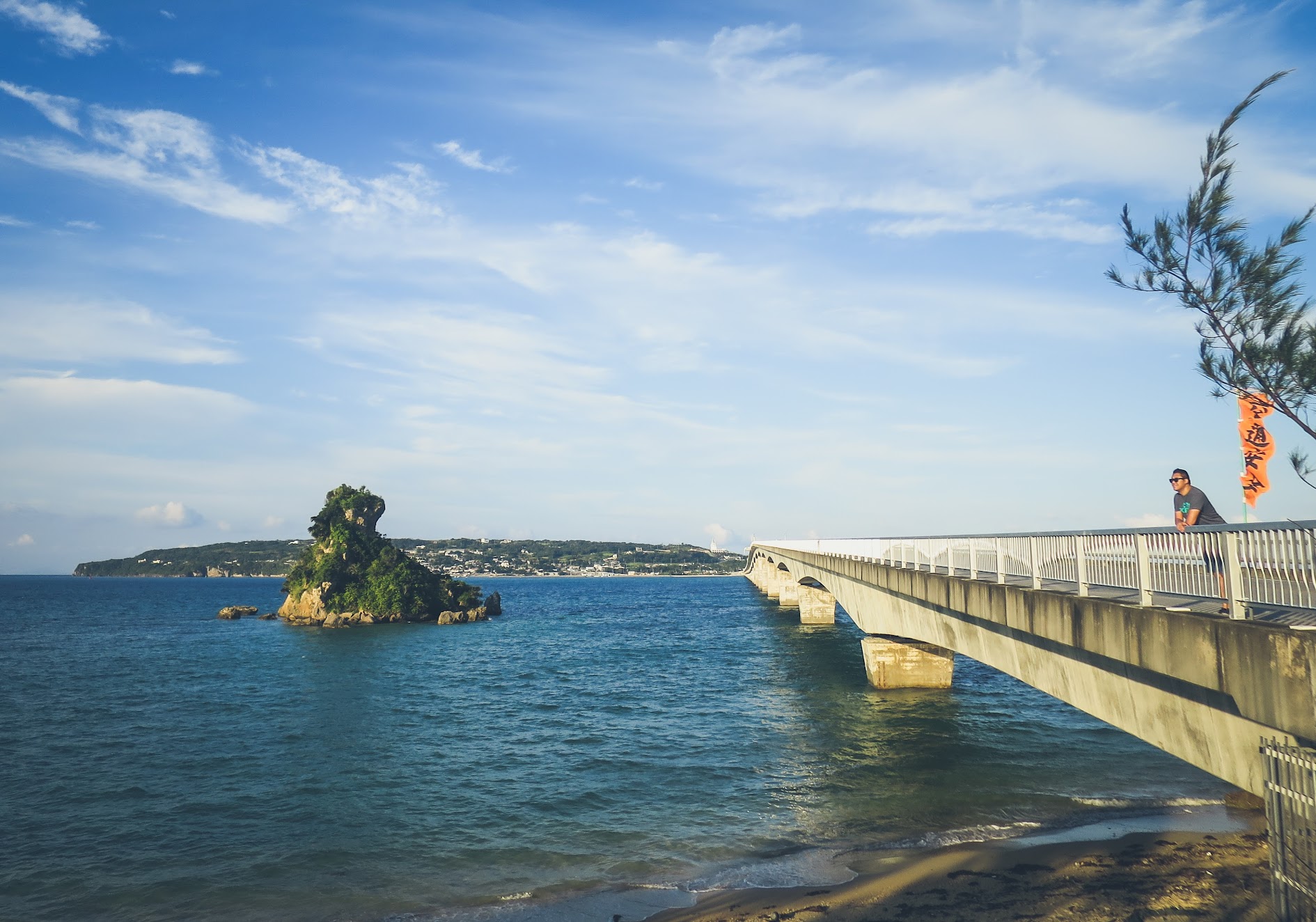 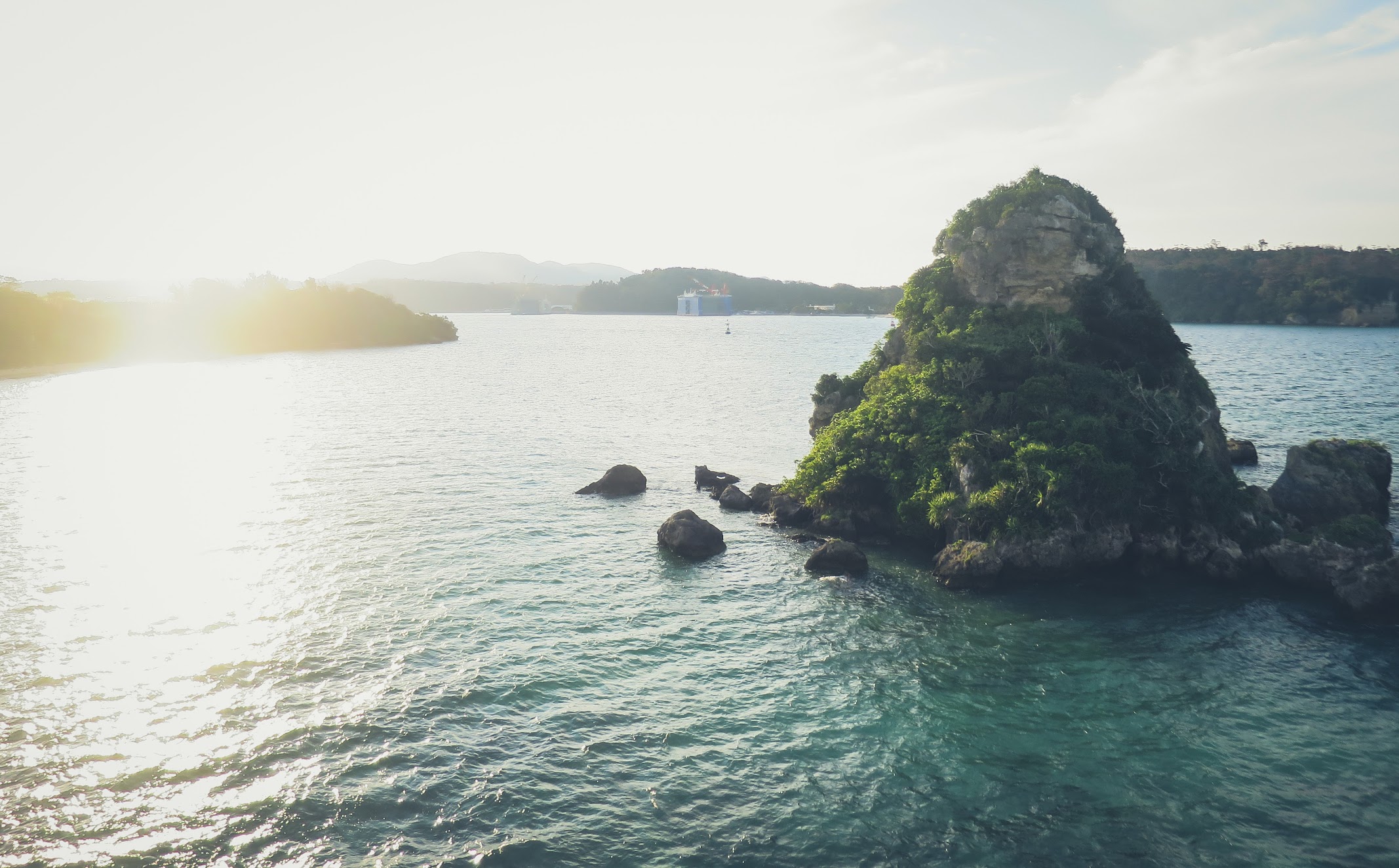 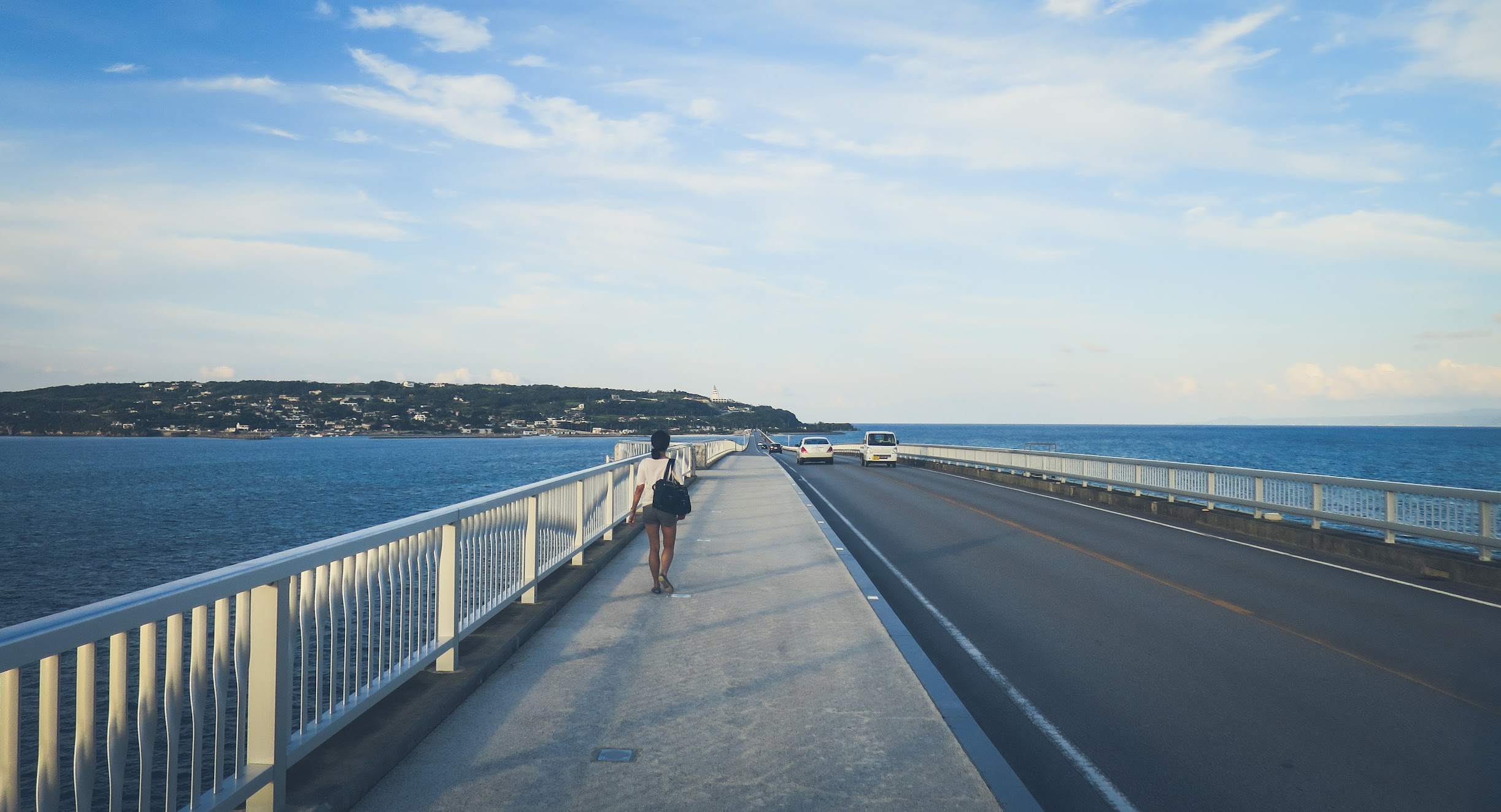 Evening Drive on the Island

On our way back to the main island, we drove along gravel roads cutting through green fields, the tops of the plants lost in the light of the setting sun. Distant hills held back the evening as we continued onto more familiar city streets, and the last colours of the day peeked out from underneath wisps of white and grey in the sky. After living and working in Hong Kong for the last several years, avoiding driving at all costs due to the horrendous traffic and the presence of a world-class public transportation system, I’d forgotten just how relaxing it can be to just drive. Okinawa was the first time I’d rented a car on holiday, relying on taxis and other forms of public transportation throughout my previous travels, but it wouldn’t be the last. 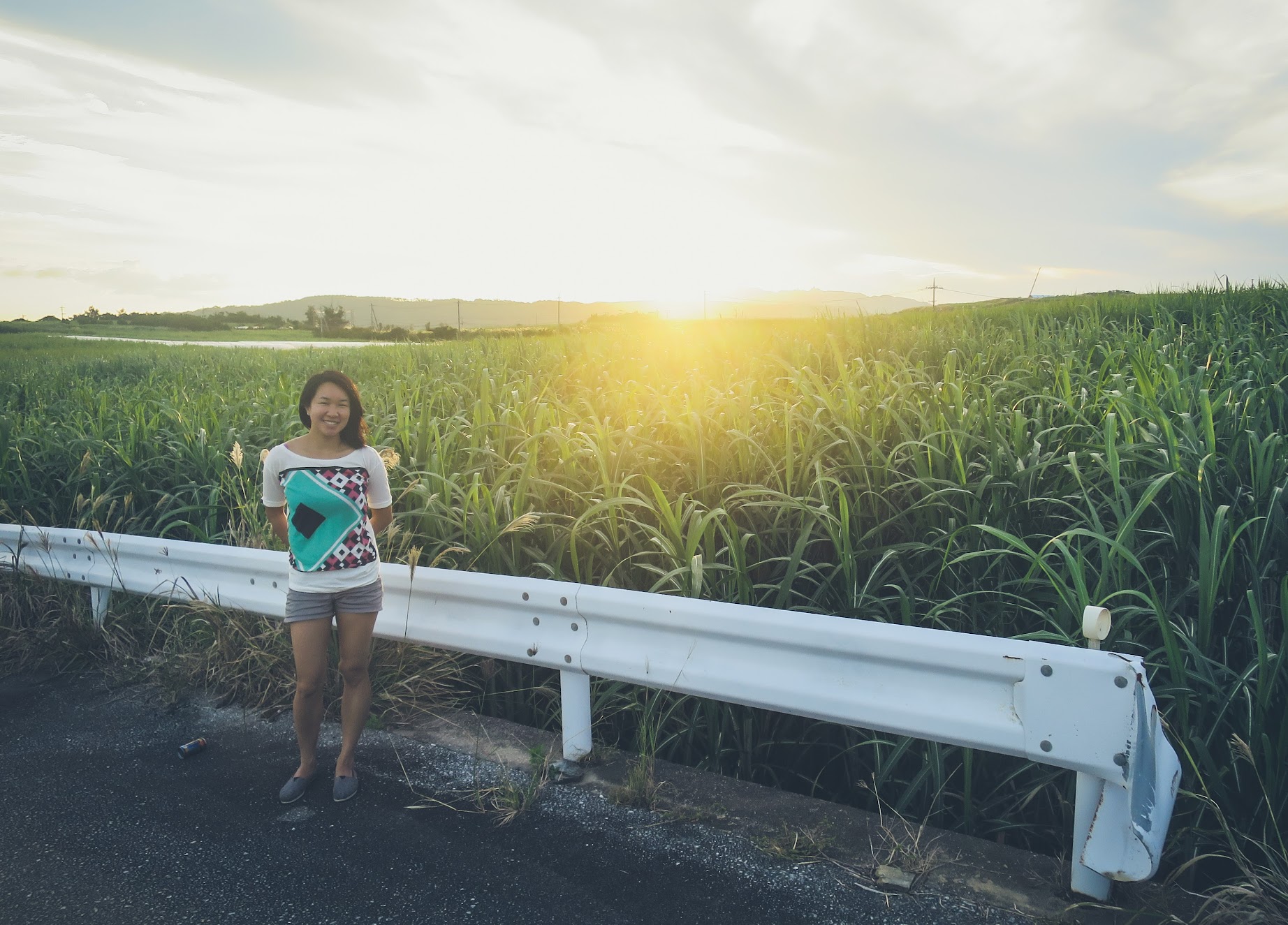 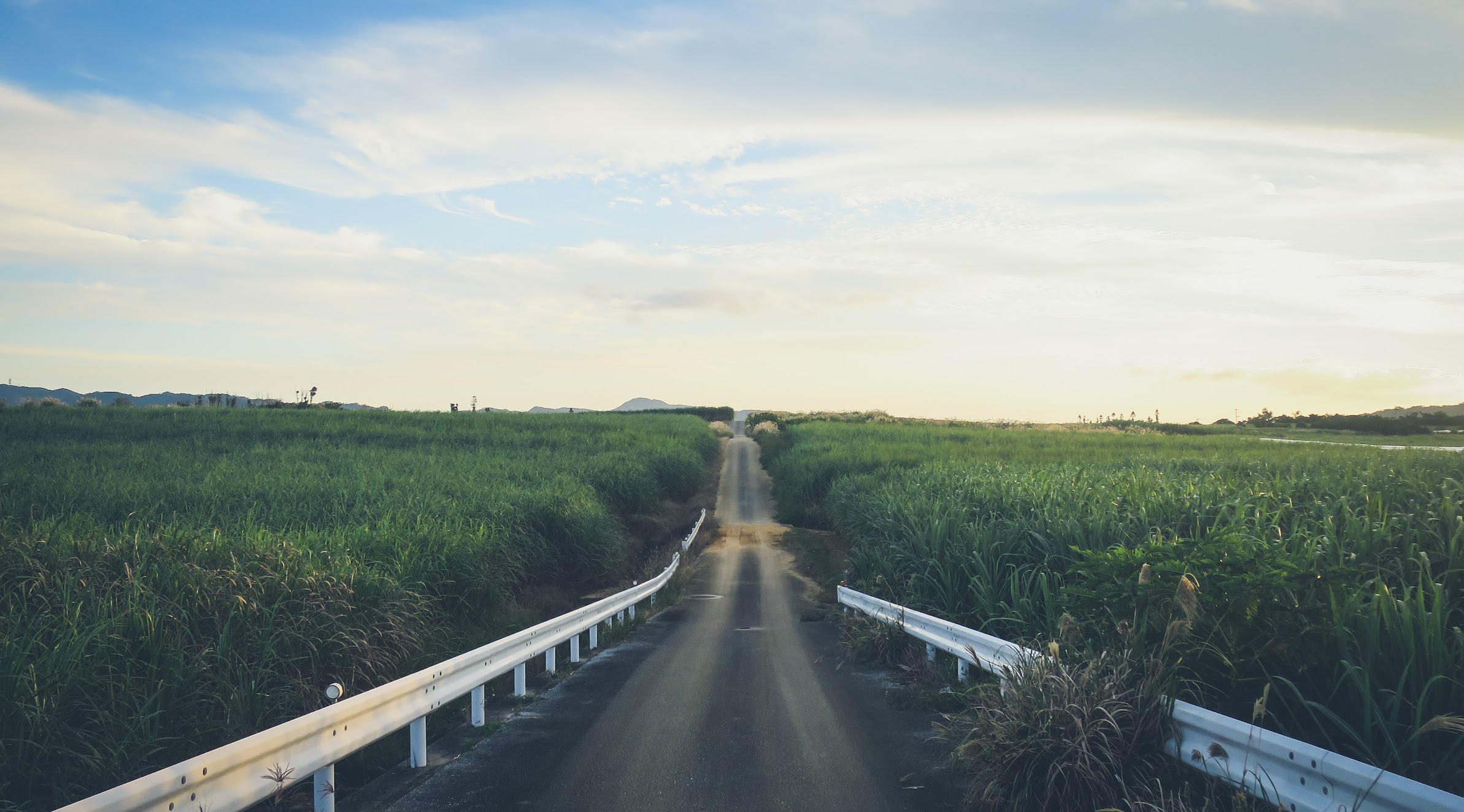 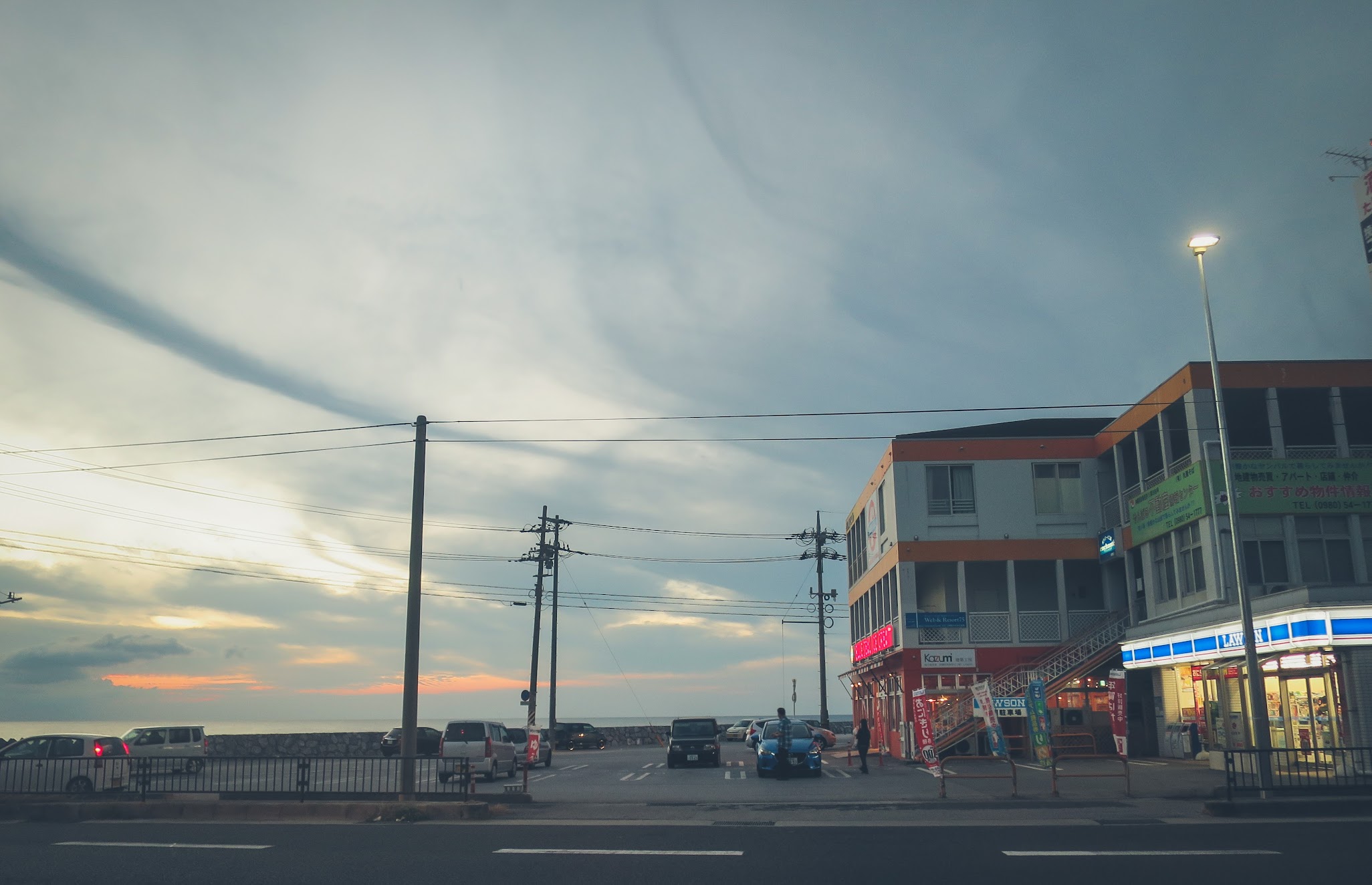 As we drove back towards Onna, we tried placing several calls to a restaurant called Warren’s Place, a one-of-a-kind Southern/Cajun joint not far from our hotel. I had initially dismissed the idea of eating non-Japanese food in Japan, but Xian and Phoebe, friends of ours from Hong Kong (appearing in Singapore 2011 as well) had just recently returned from their own trip to Okinawa, and they highly recommended that we try it out. Not surprisingly, Warren’s Place was started by an American named Warren, a long-time resident of Okinawa, though he bounced around Japan a few times in the preceding decades. It began as a shed on a hill, whipping up Southern comfort foods to homesick Marines, but its clientele has quickly grown beyond the soldiers stationed on the island. Due to the limited space and its increasing popularity, both locally and internationally, making a reservation is a must, and we managed to finally sneak in a spot for two before we arrived that night. 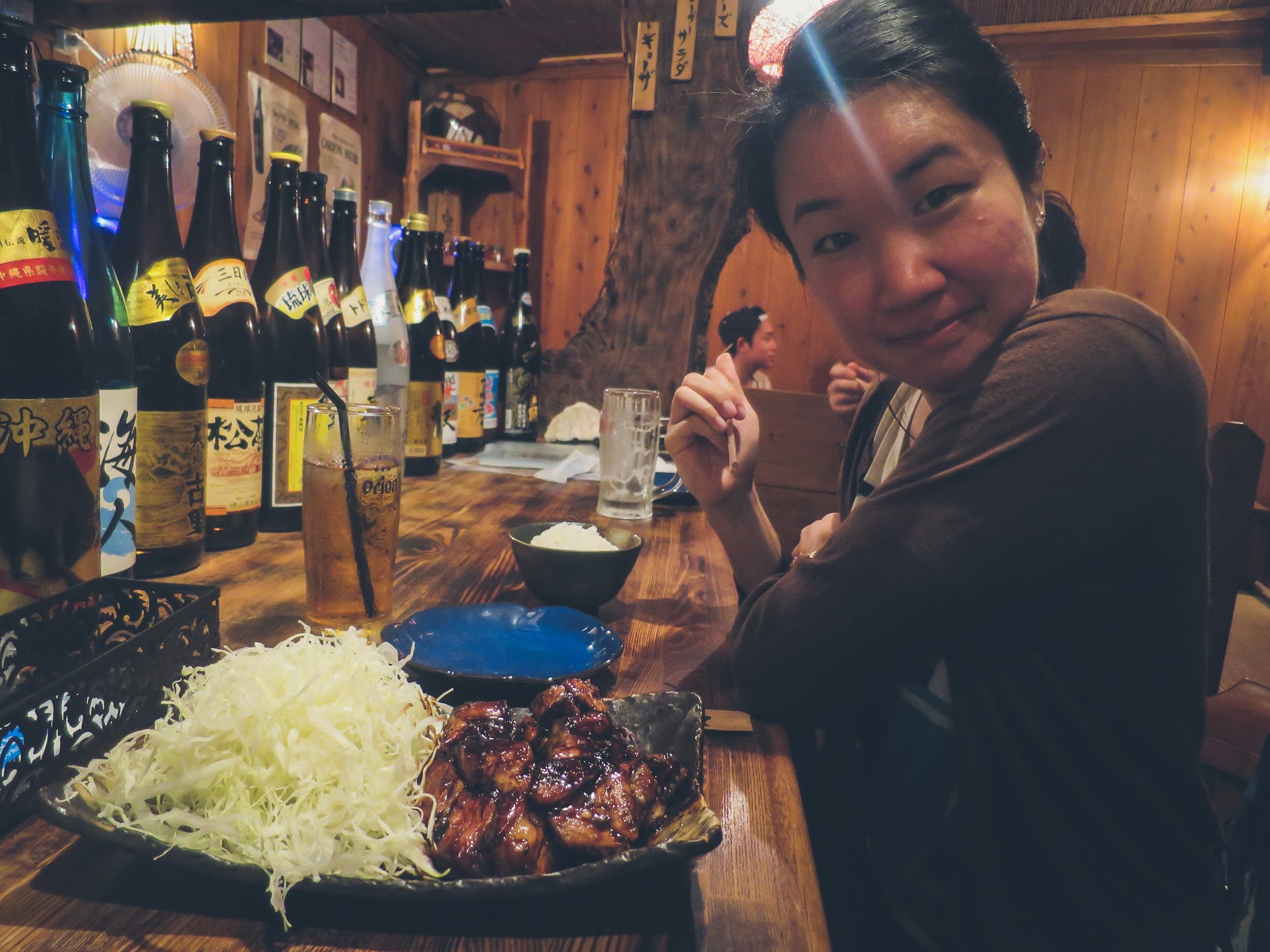 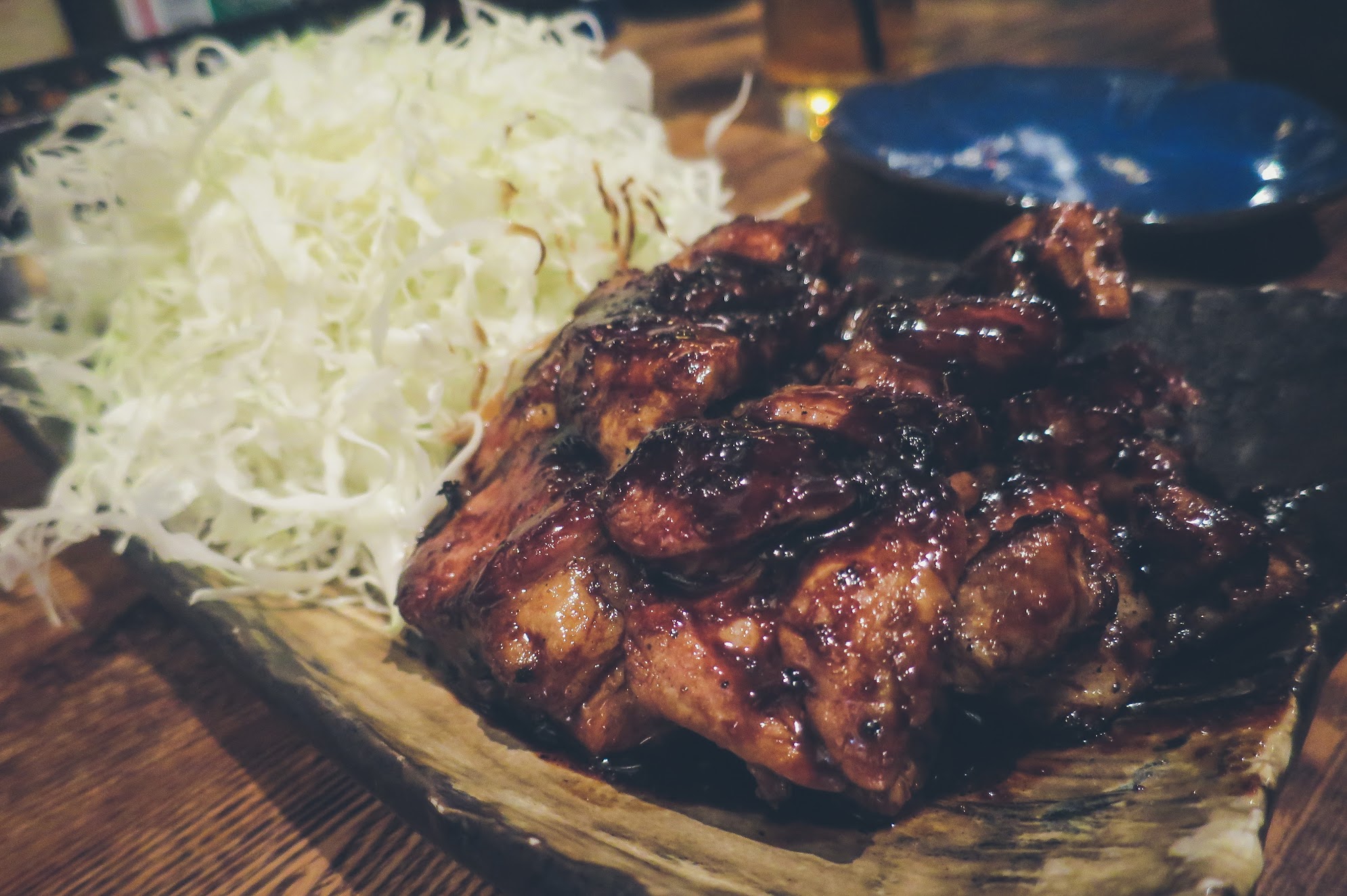 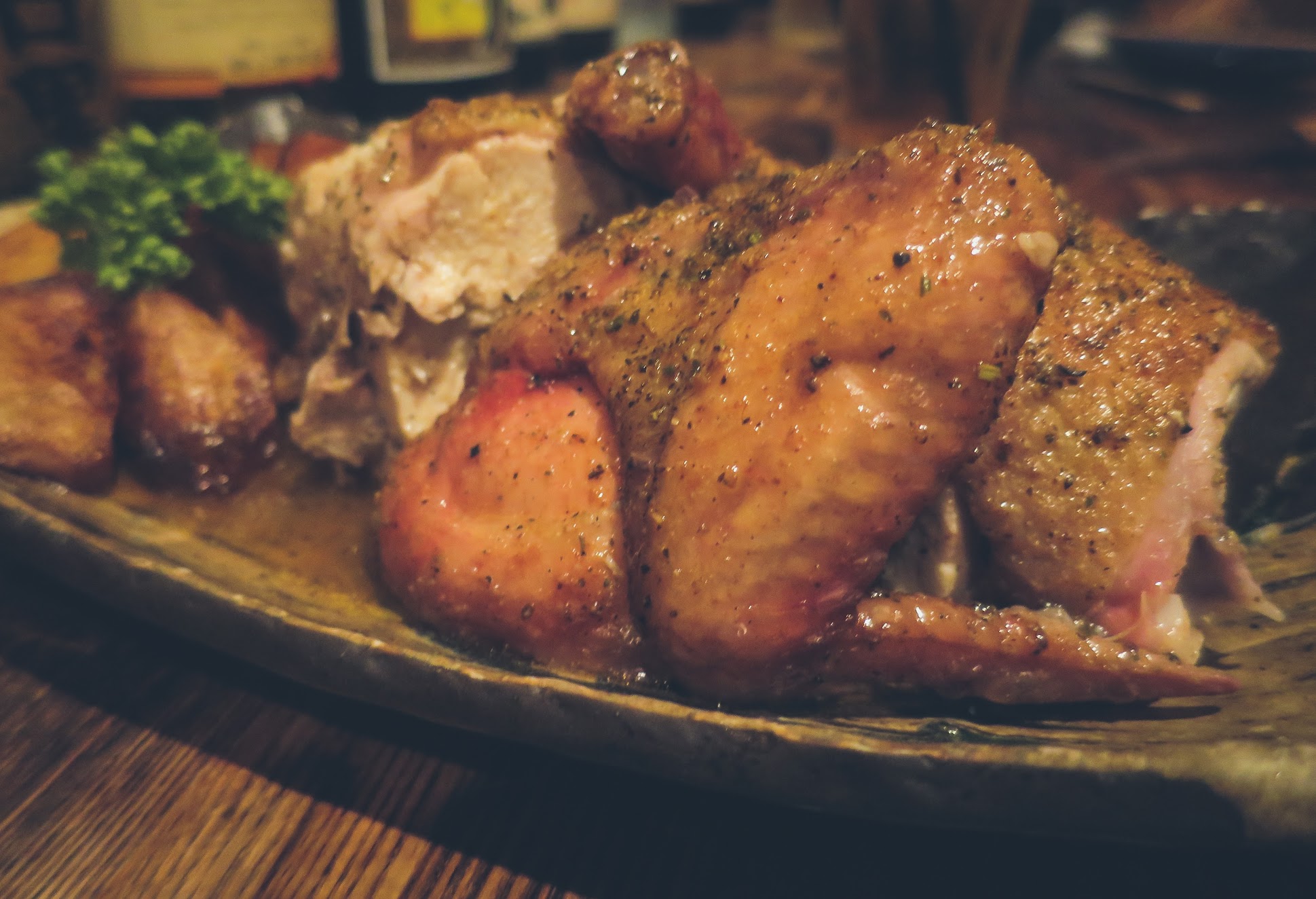 We met and chatted with Warren for a bit when we first arrived, getting his recommendations and a bit of his story at the same time. When he was off dealing with other customers or cooking in the kitchen, his kids did all the place setting and table clearing duties, running around with piles of cutlery and trays of piping hot food without missing a beat. The simple menu was chock-full of tempting dishes, but we ended up ordering the tonteki, a juicy, sauteed pork with salt, pepper, garlic, and a sweet sauce, and an unbelievable smoked chicken with German potatoes. The food was some of the best we’ve ever had, especially the chicken, smoked in their own smokehouse across the road for 8 hours, and I can’t recommend this place enough. Warren’s hospitality and friendliness is a big part of the dining experience as well, and, though his exterior is a bit gruff, it’s belied by the love and tenderness poured into his incredible dishes. When we finally peeled our butts off the wooden seats and stumbled into the still Okinawan night, it was with equal parts contentment and regret – a classic case of the eyes being bigger than the stomach. 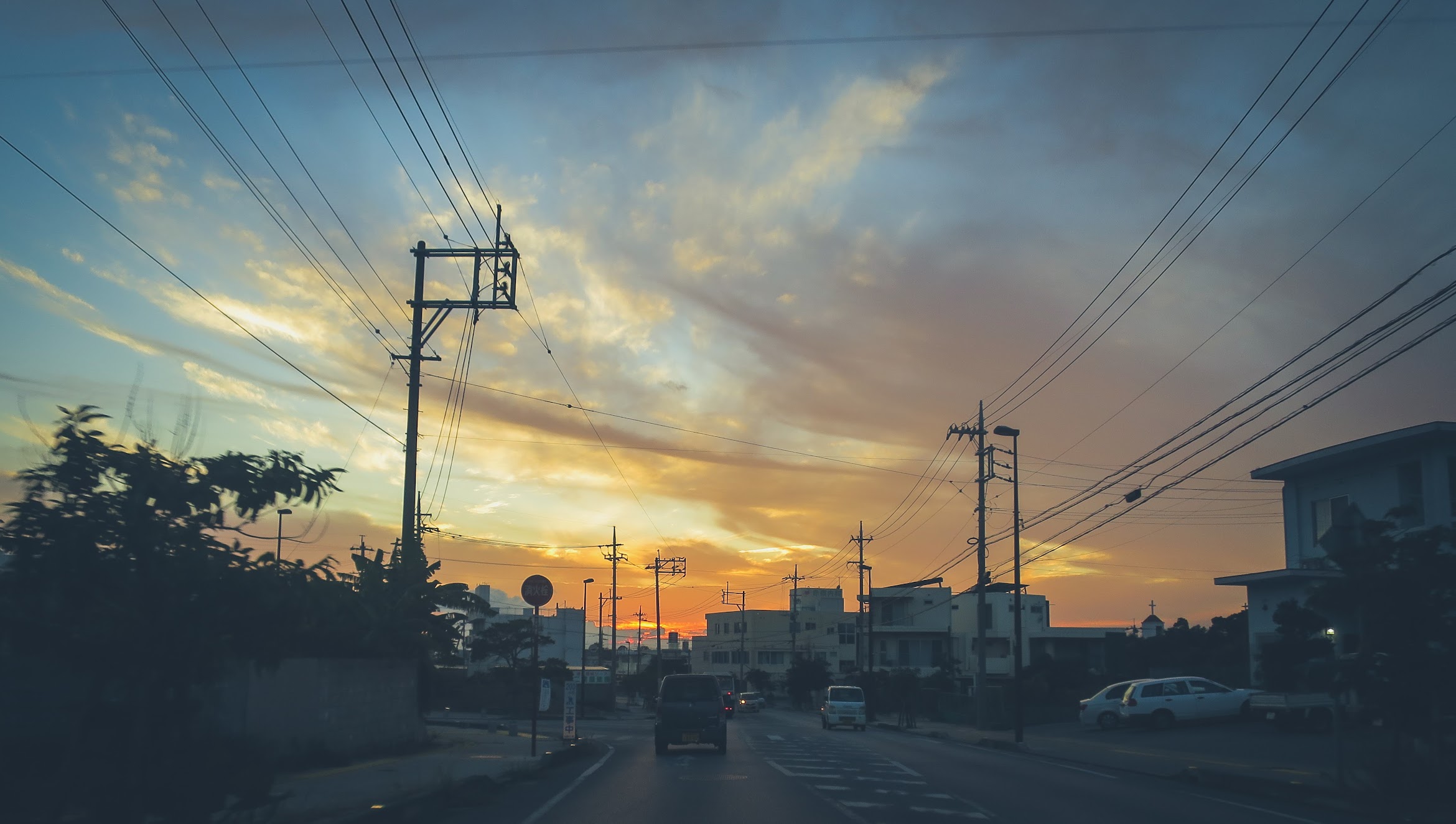