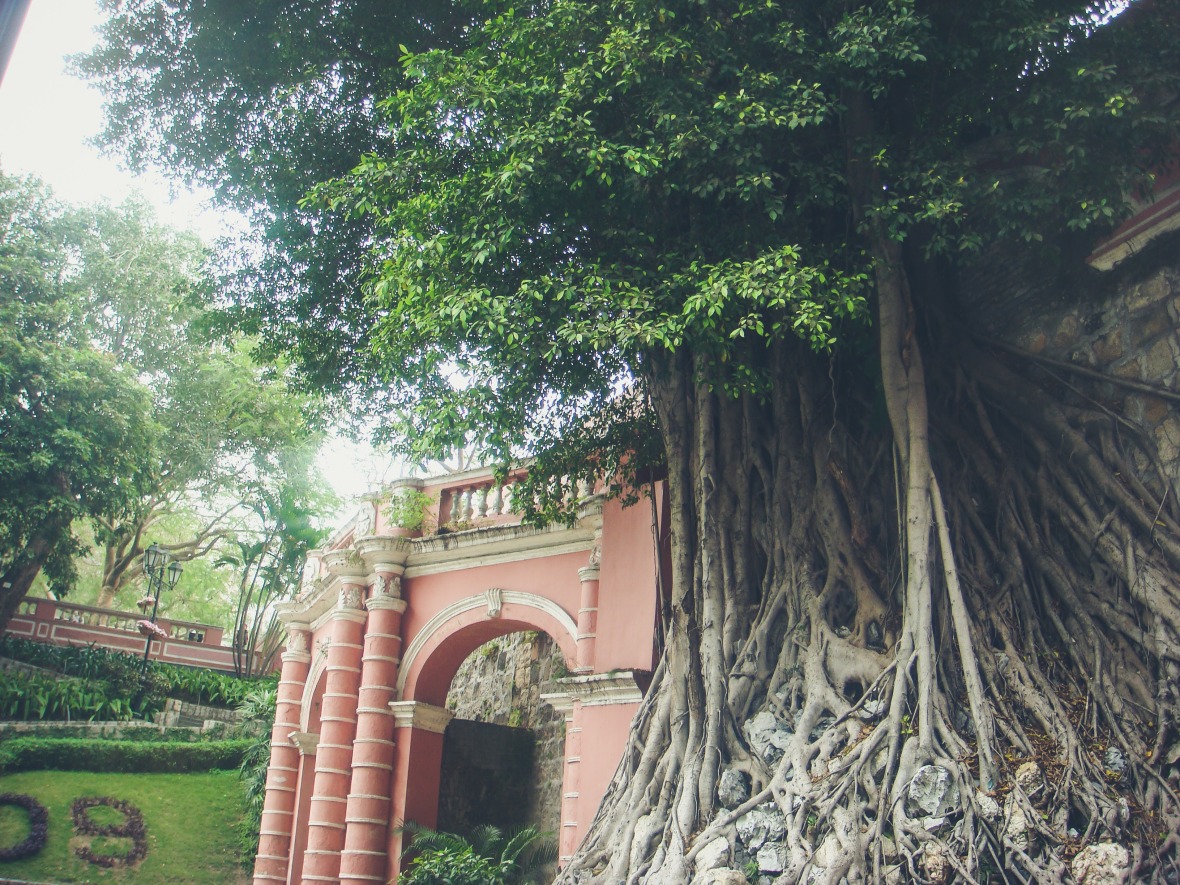 After returning from Beijing, I spent the next few days taking things slow. My three month holiday was now entering its last third, and I found that I wasn’t quite ready to accept its inevitable conclusion. My parents would soon be joining me in Hong Kong to attend a cousin’s wedding at the beginning of March, marking the beginning of the end.  Earlier in the trip, I had met Kat, a friend of a friend from back home, who, at the time, was a teacher in Macau.  Originally from Toronto, she had offered to host if I ever found myself in the former Portuguese colony. After contacting her to let her know that I was thinking of swinging by her city, she very generously invited me to stay with her and her housemates. Getting to Macau was a breeze, and within days I was on the morning ferry, cutting across the Pearl River Delta.

Macau is one of two Special Administrative Regions in China, along with Hong Kong. Though separated by only an hour’s ferry ride, its history and culture reflect a different historical narrative that begins in the medieval kingdom of Portugal. After defeating the Moors in the 13th century and claiming Portuguese sovereignty along the Atlantic coast of the Iberian Peninsula, they began exploring the unknown lands beyond its familiar coastal waters. By the 16th century, they were rulers of a vast empire that stretched across South America, Africa, the Indian subcontinent, and East Asia, courtesy of their considerable naval forces. The Portuguese colony of Macau was at its peak in the 16th and 17th centuries, a wealthy port city fought over by distant European empires – all this while Hong Kong was an insignificant jumble of fishing villages scattered across a rocky shoreline. Macau’s downturn echoed the long, slow decline of the empire throughout the next two centuries, and, by 1999, it was one of two tiny colonial outposts that represented the dying gasps of Portugal’s imperial ambitions. That same year, Macau’s sovereignty was handed over to China, two years after Hong Kong’s own handover ceremony. In its last decades under Portuguese control, it had been surpassed by Hong Kong in wealth and prosperity, but recent years have testified to its newfound status as Asia’s gambling paradise, and it has experienced an economic revival the likes of which have not been seen in these parts in over four hundred years. That is the Macau to which I was currently headed – a city that had seen glory days, gone through decline and decay, and persisted to find itself once again riding the swell of rising fortunes.

Much of that first day was spent wandering the peninsula, the densely packed urban center of Macau, where the majority of the population resides.  One of the first things I did was climb to the fortress at the summit of Guia Hill to get a look at the city from above. The sky was overcast, and the buildings seemed to be painted with the same brush as the clouds – a monochrome image in shades of dusky brown.  After taking a rickety cable car down the hill, I walked to the far northern end of the city, near the border crossing with China, and made my way past elaborate gardens, neighbourhood temples, Mediterranean piazzas, and entire blocks frozen in time since Portuguese soldiers, African slaves, and Chinese merchants plied their trades together on these same narrow streets. The ruins of Saint Paul’s Cathedral, arguably the most famous landmark in Macau, stood as a testament to the city’s colonial past, as the colours of the dying day shifted into its purple and pink phases. 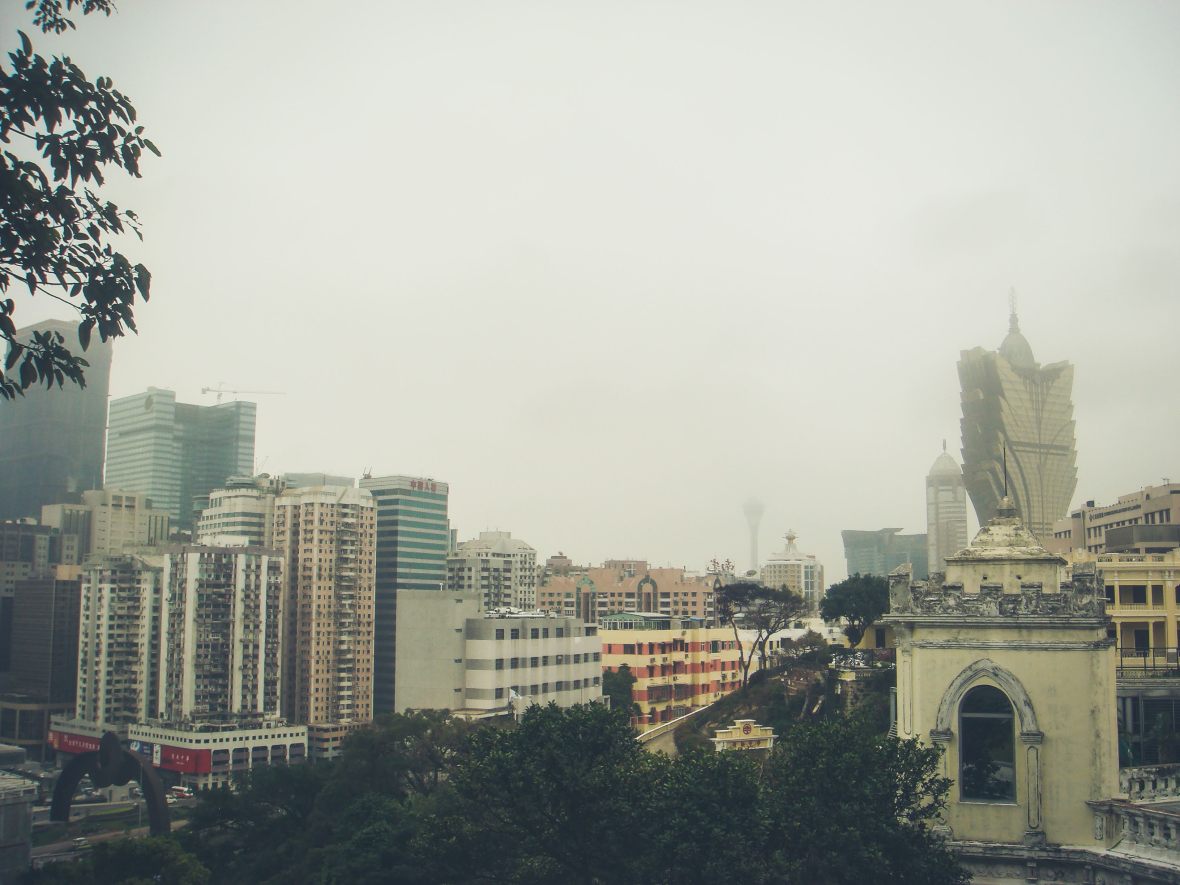 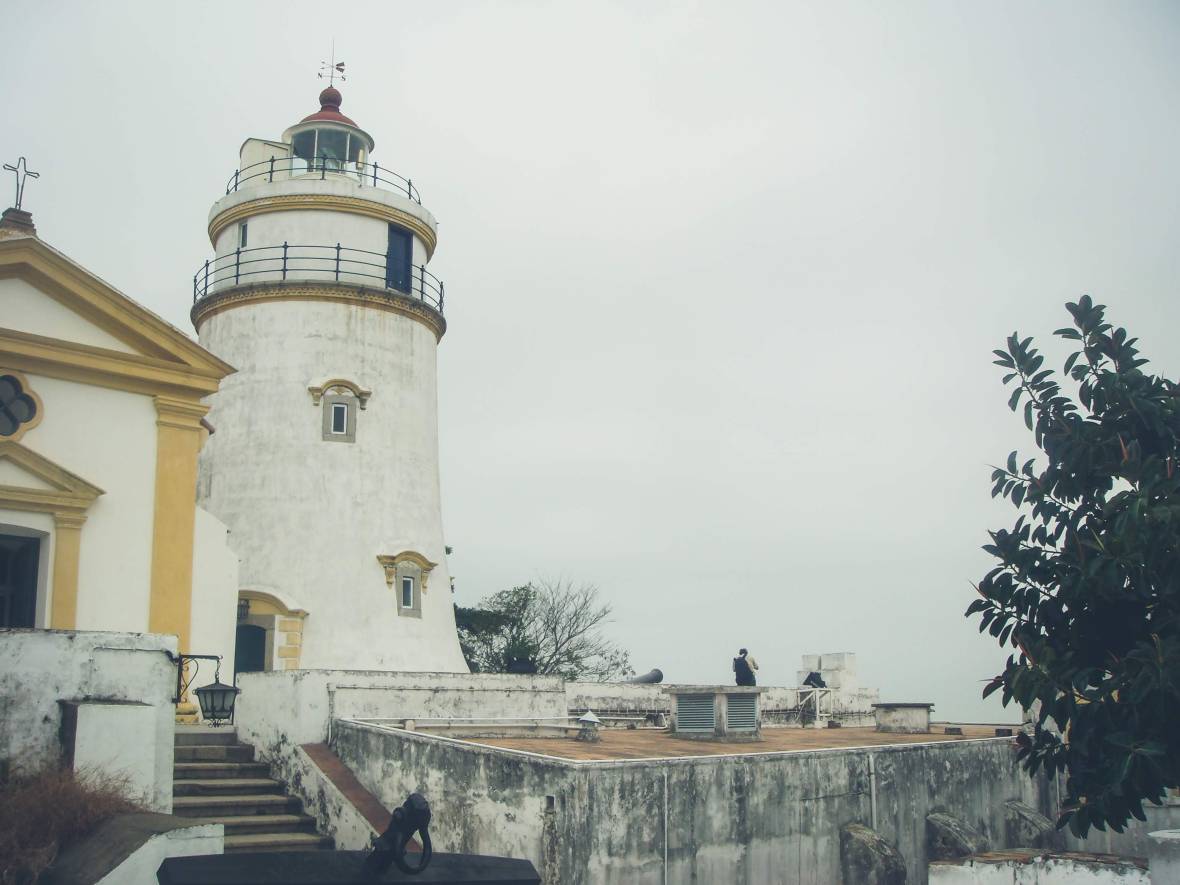 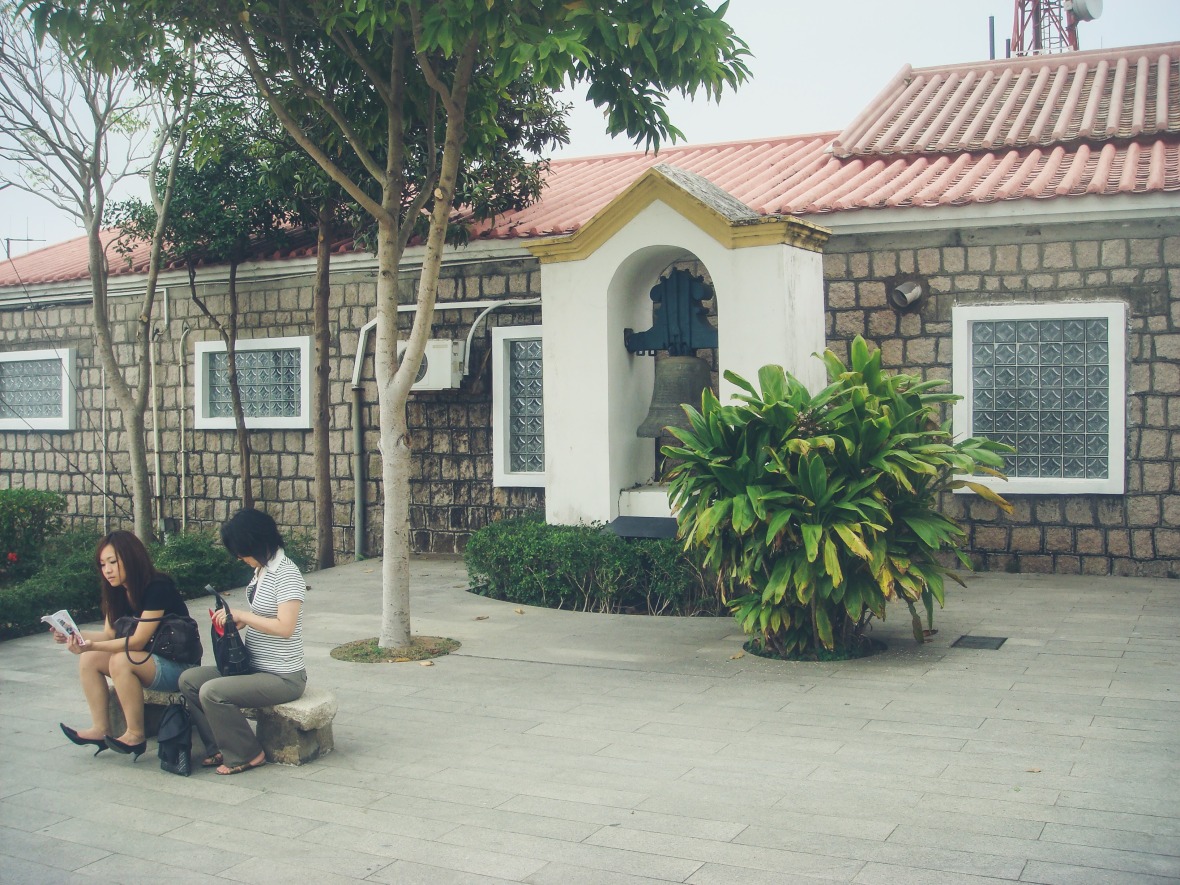 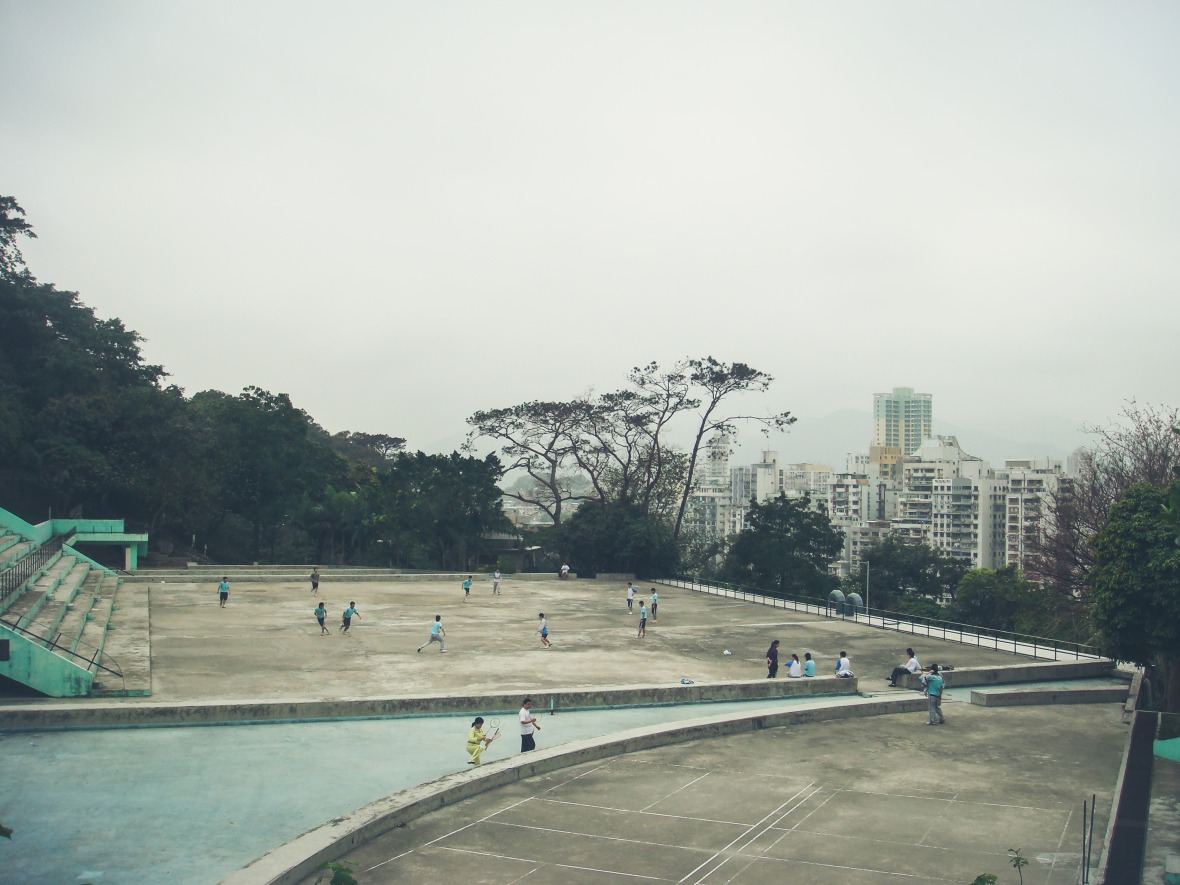 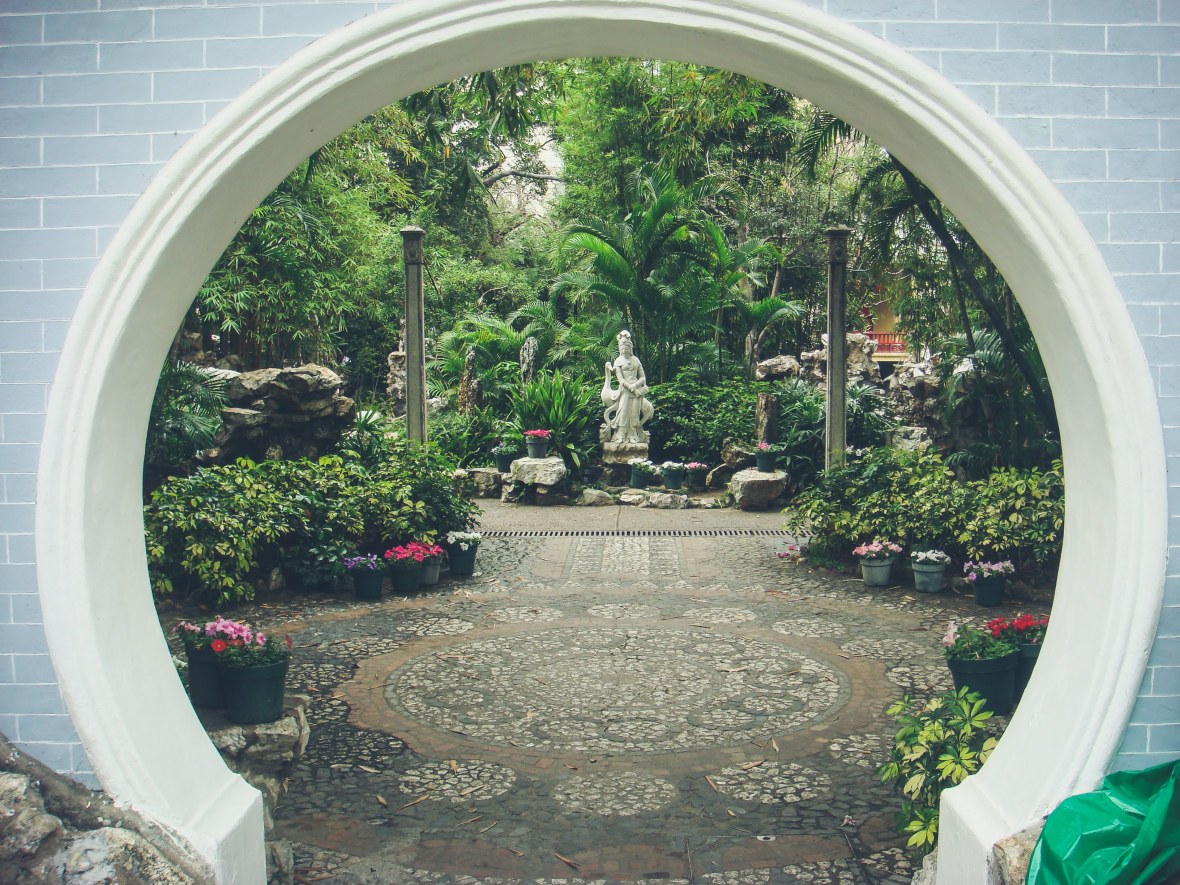 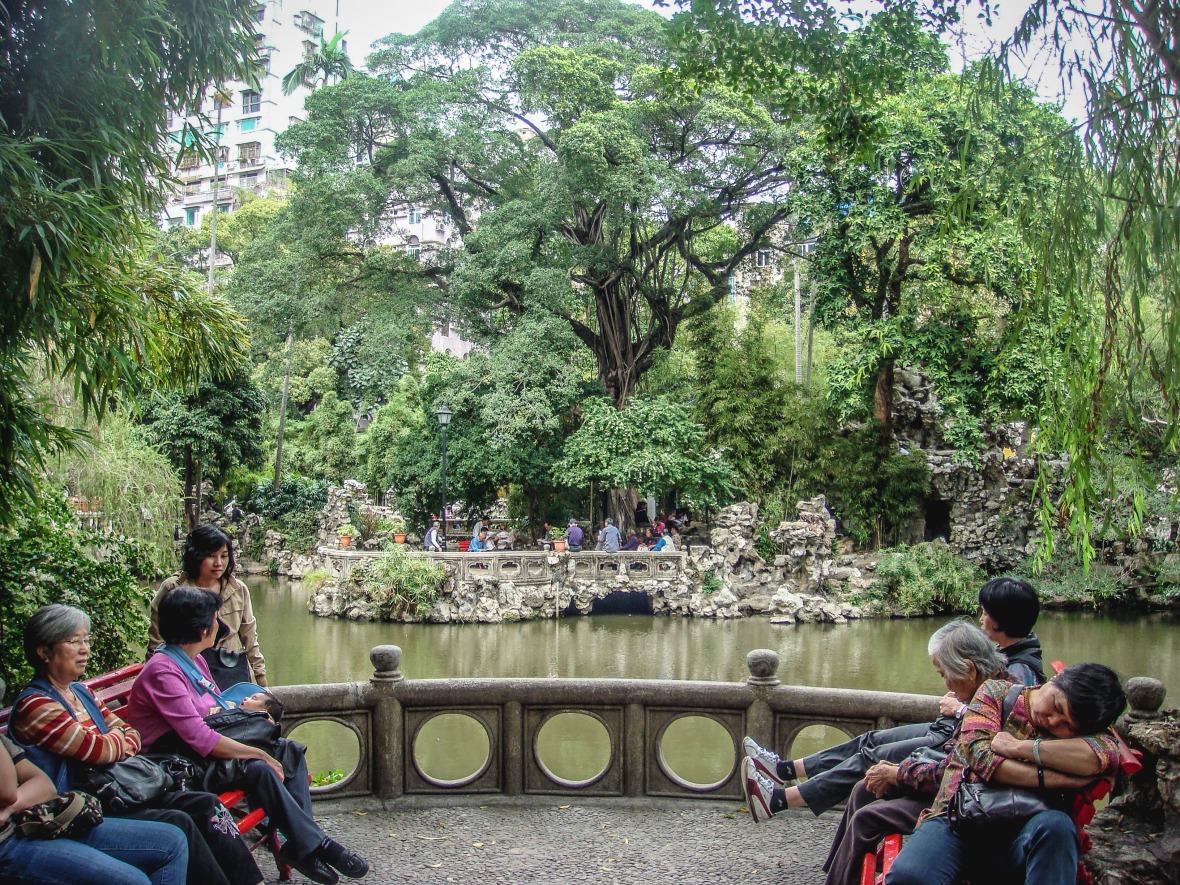 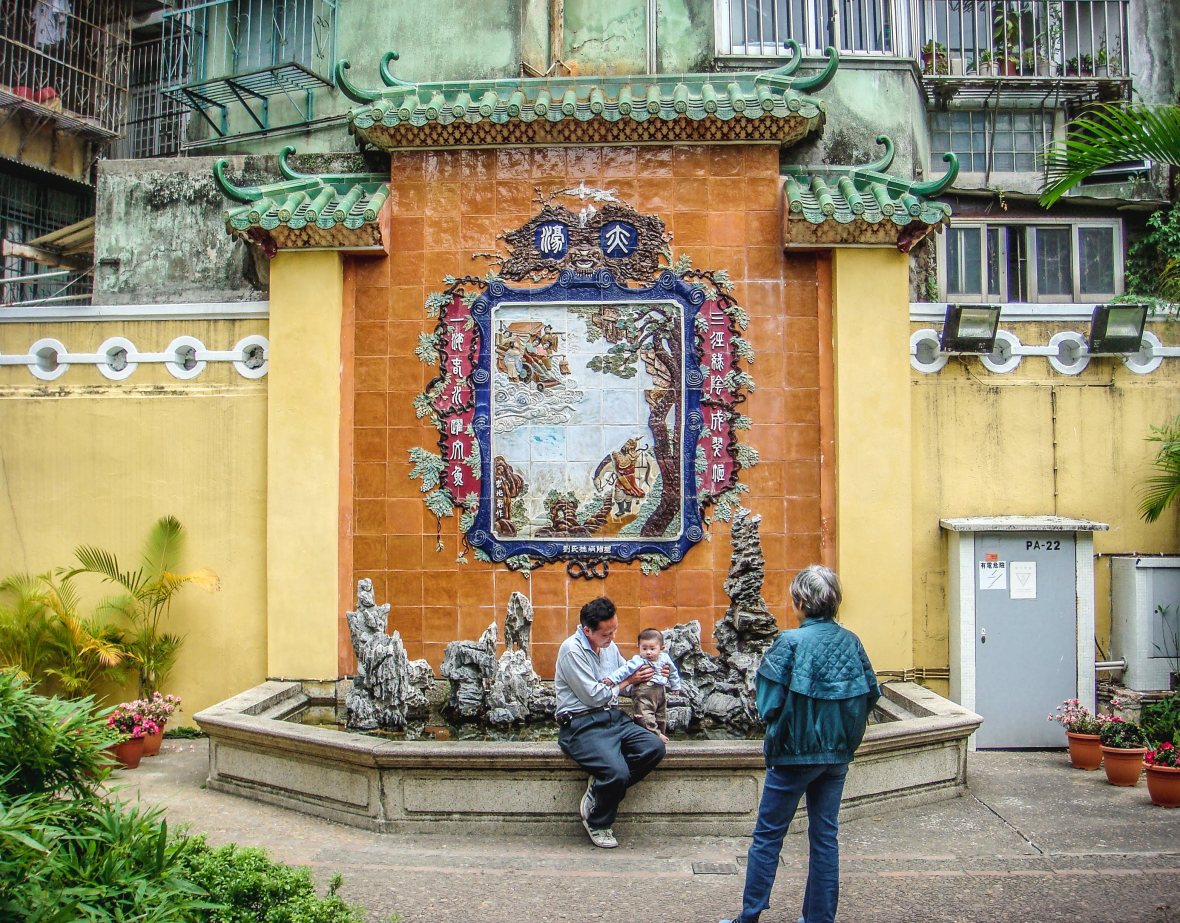 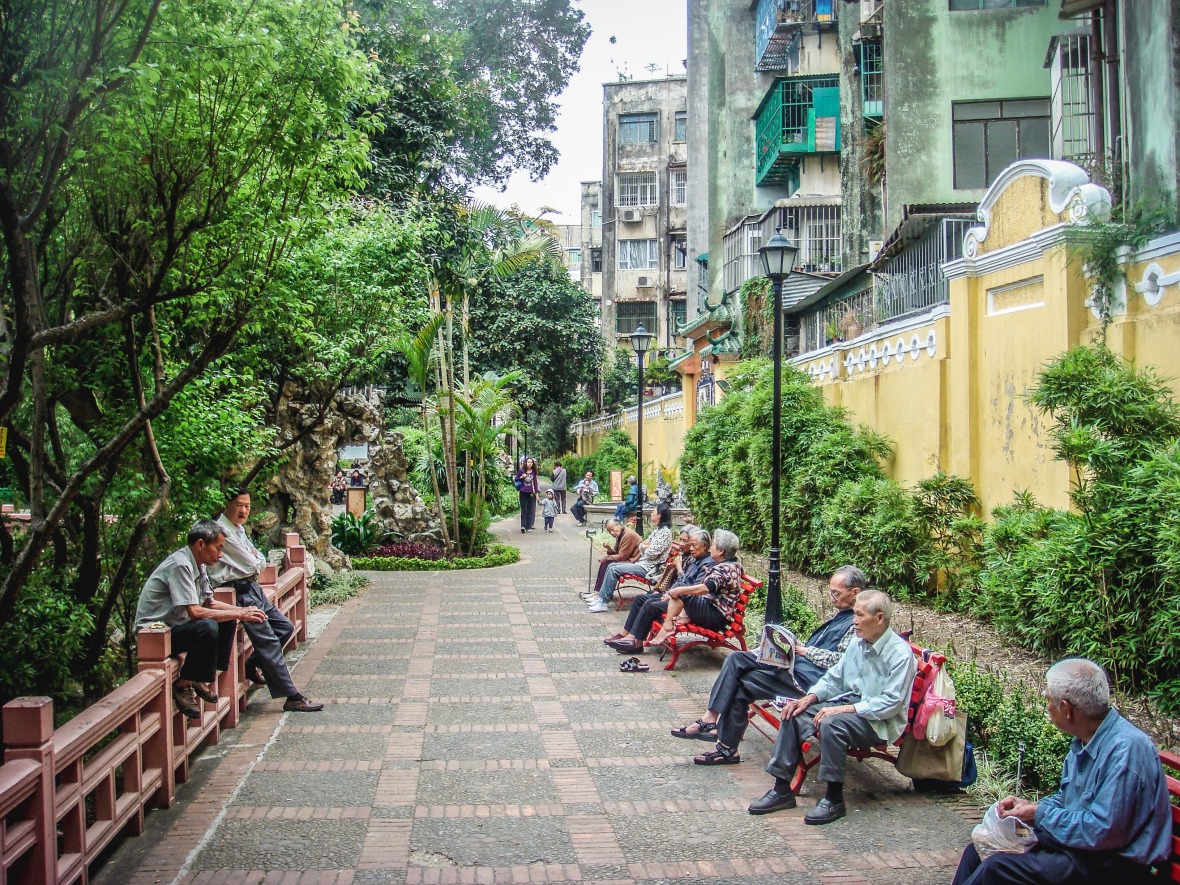 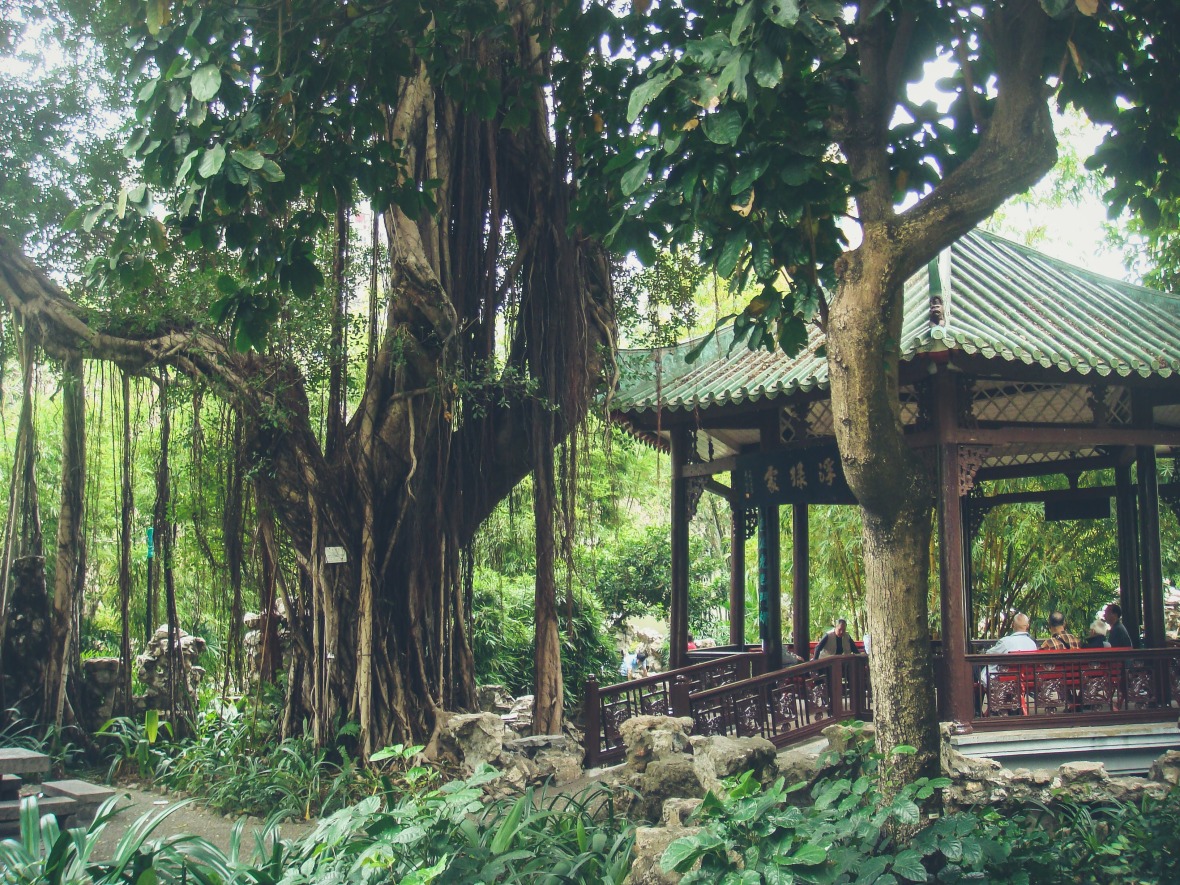 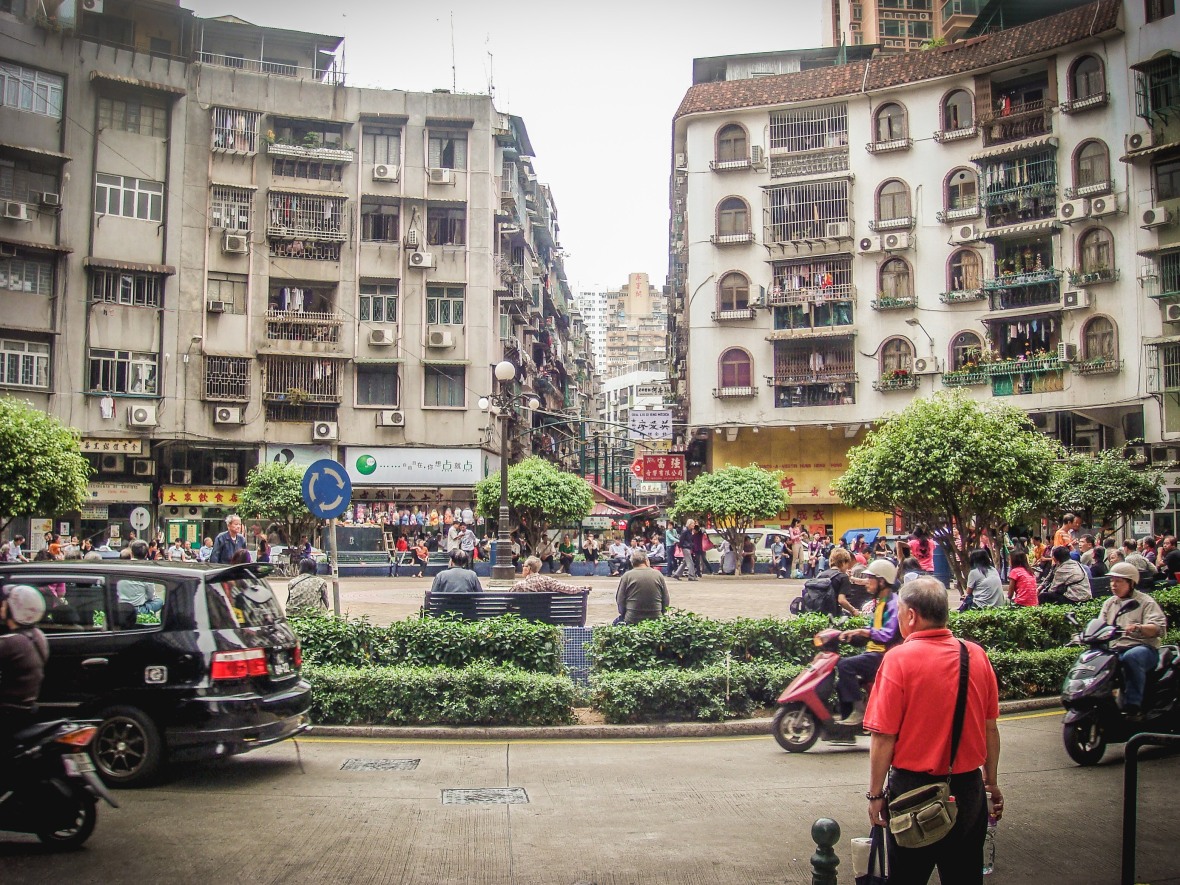 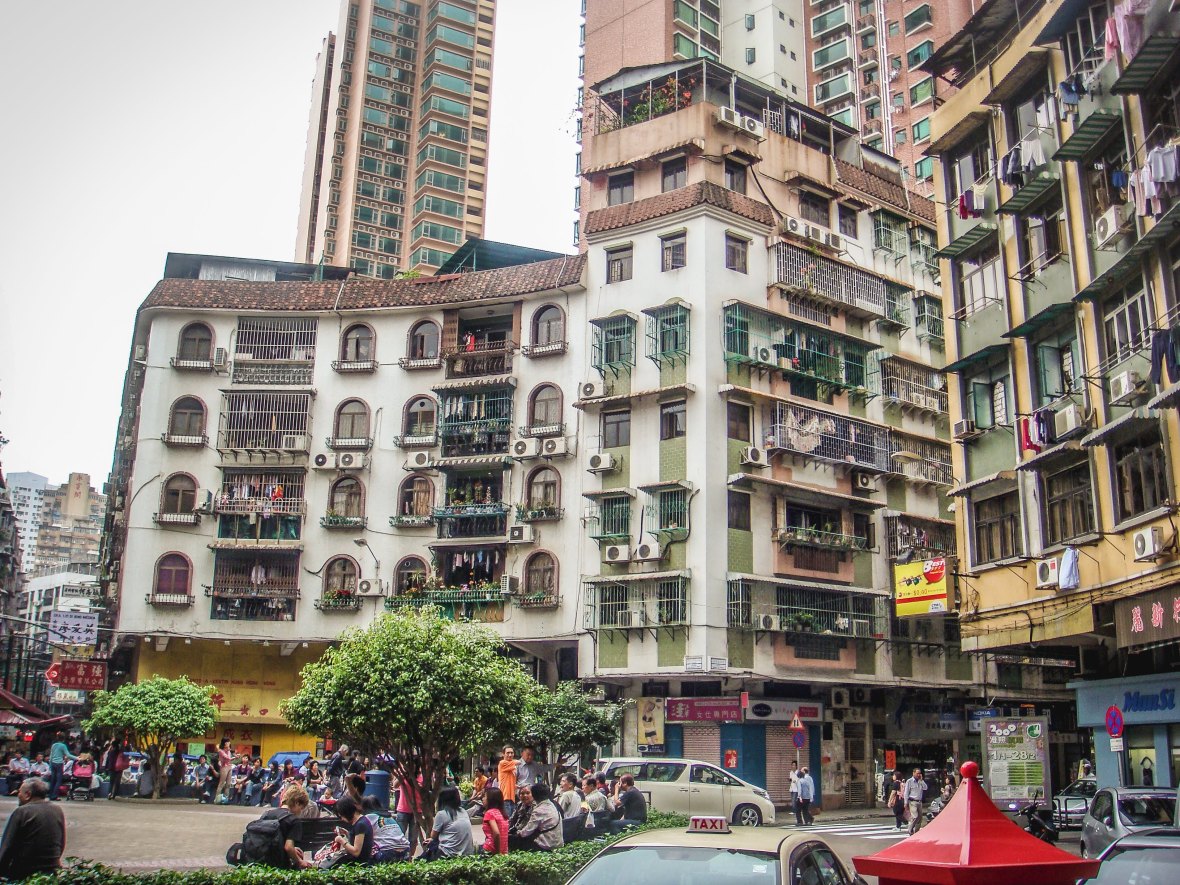 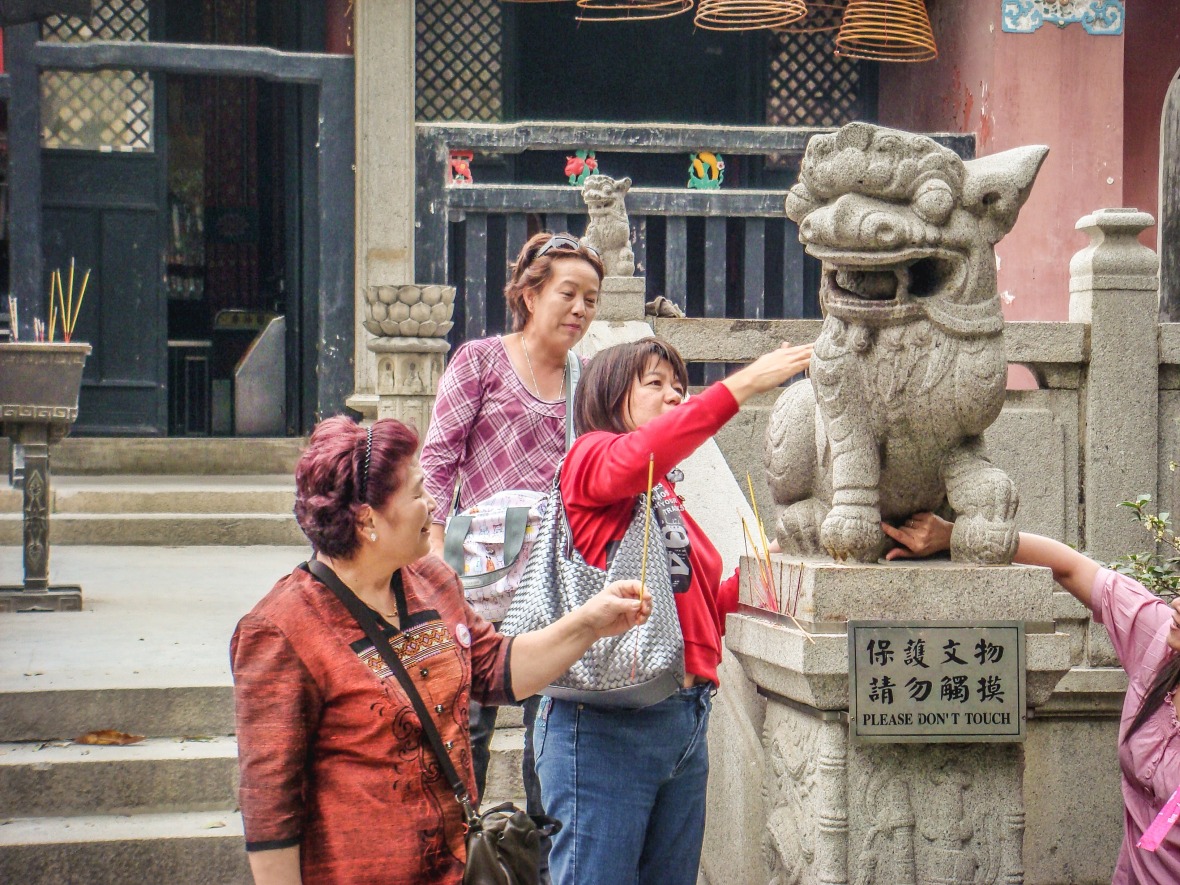 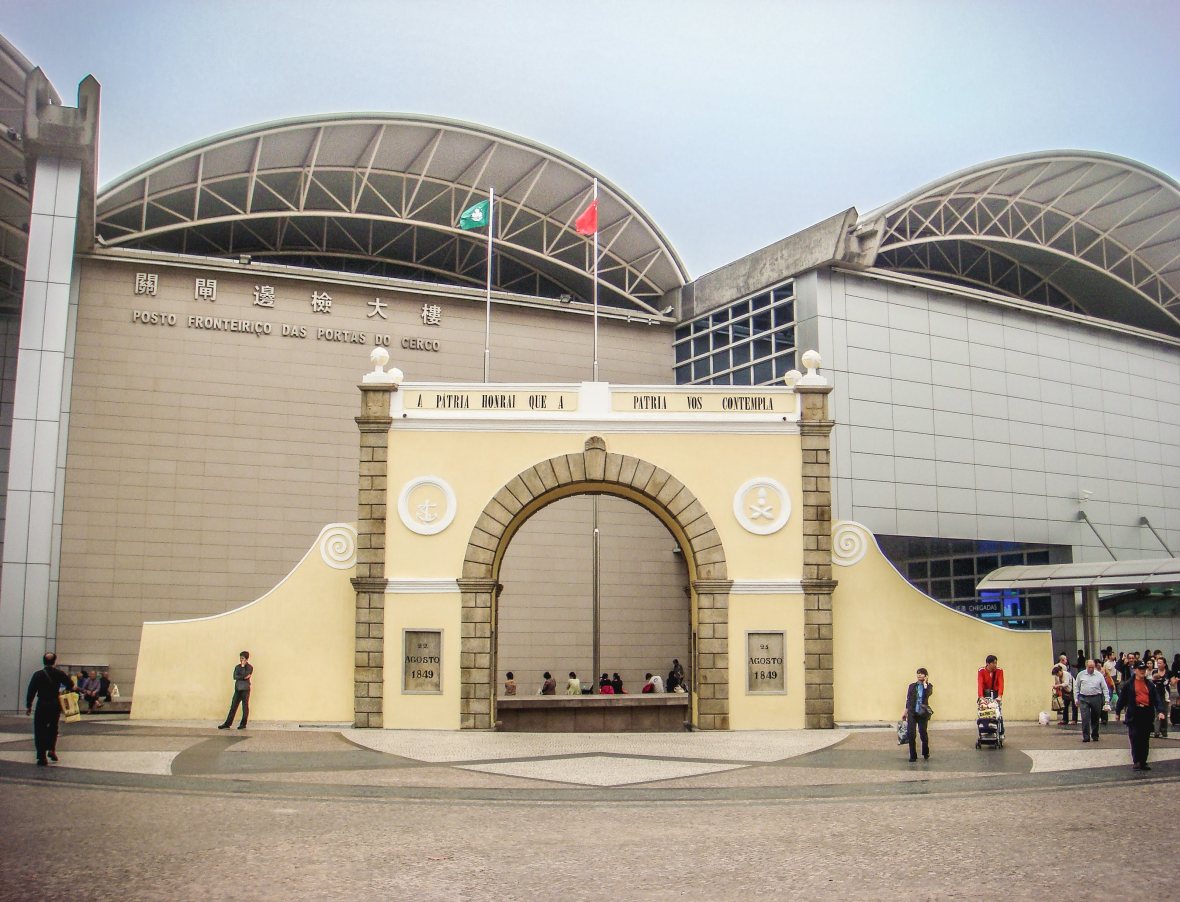 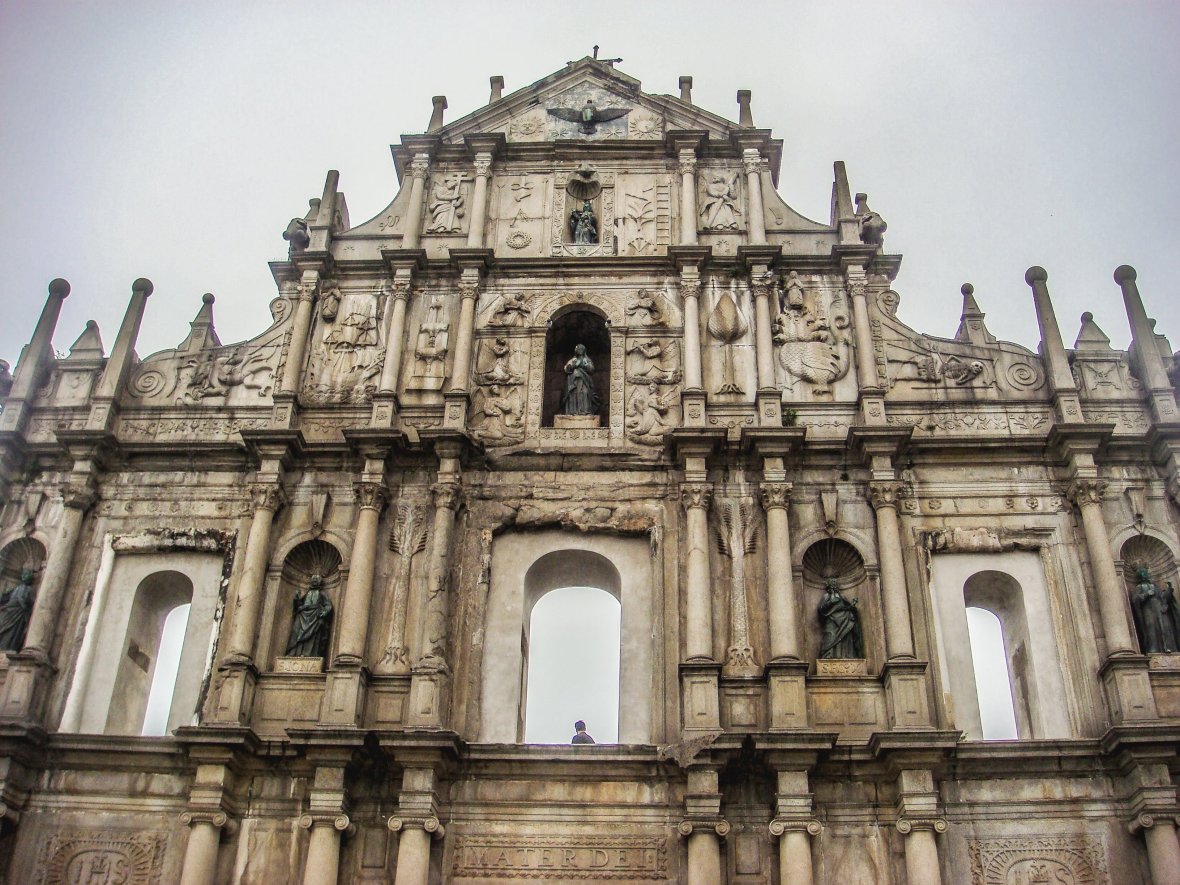 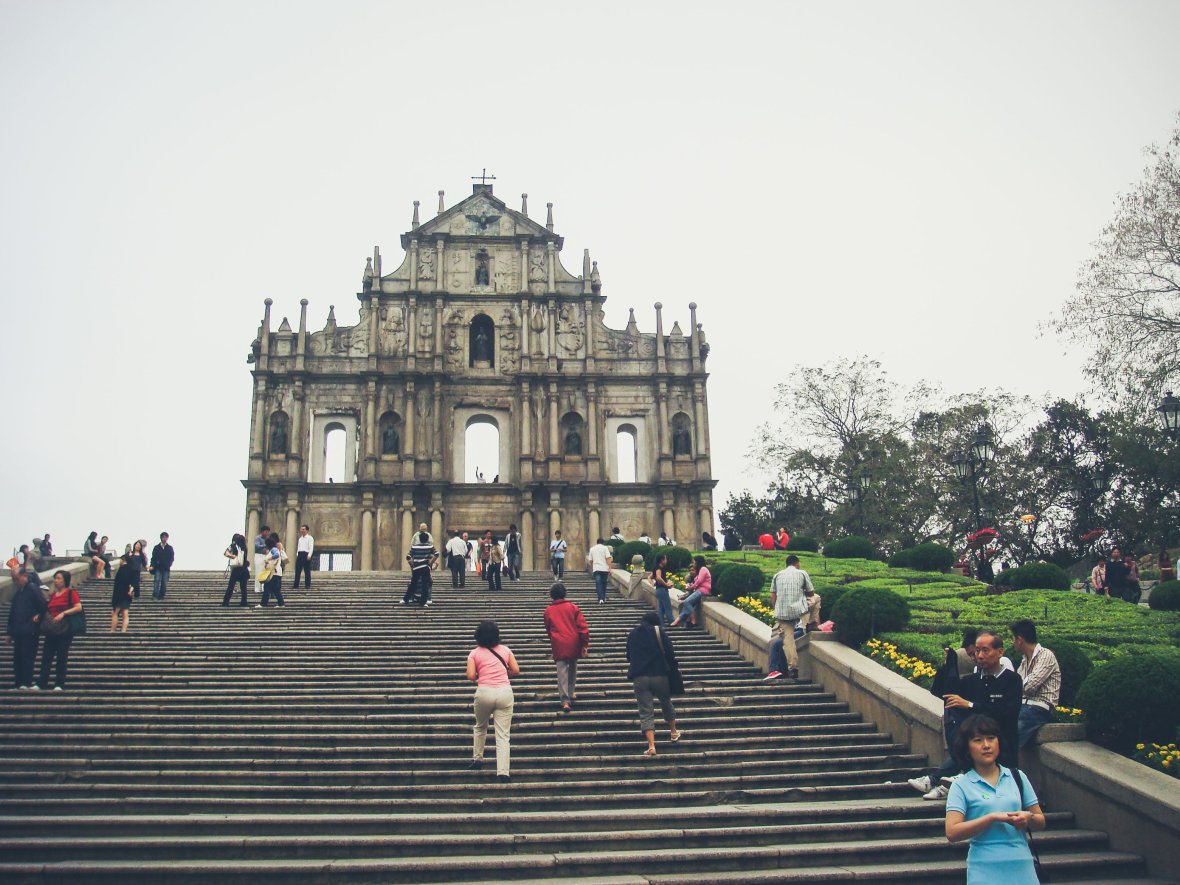 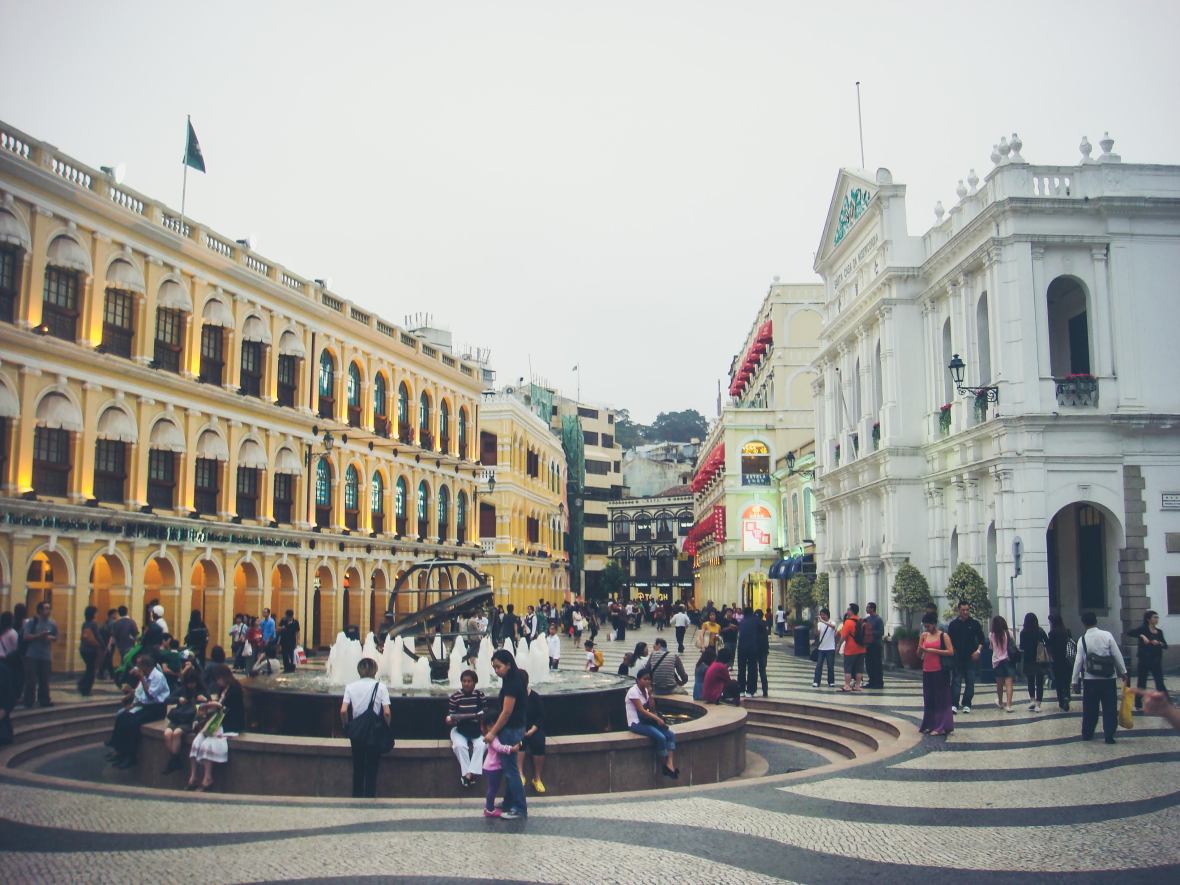 An Evening with Teachers

In the evening, I met up with Kat in the lobby of the Venetian, one of several Vegas-style casino hotels dotting the Macau skyline, and she took me through the hotel grounds and back to her nearby apartment, which she shared with three other girls. All four of them were teachers at the same international school – the only international school, in fact – in Macau, and had been recruited from different parts of Canada to teach the children of wealthy casino investors. We went out for dinner nearby, and then we took a walk around their part of town. The main casino strip was being built up nearby, although the financial crisis that had begun that autumn, and would continue throughout the next few years, had put a temporary halt to any construction. For every Venetian – garish, lit-up, architectural monstrosities – there were two or three empty shells shrouded in darkness, the skeletons of would-be casinos and hotels that had felt the crunch of global greed gone askew. To gaze upon these barren frames, row on row, was to get a peek at the ebbs and flows of global wealth. Half a decade later, many of these structures have been completed, filling the coffers of the lucky few who went all in, as well as the Macanese government.

The girls needed to go home and do some marking, and I was feeling the effects of being on my feet all day, so as they retreated to their rooms, I planted myself on their couch and put on a movie. Later that evening, after they had finished with their work, we gathered in the living room to talk about what I should do tomorrow before going back to Hong Kong. Hasty maps were scribbled on napkins and business cards, and recommendations for food and drink were noted and filed away, before we said our goodnights, and our goodbyes, shortly afterwards. As it happened, I awoke to any empty apartment the next morning, and, after a quick shower, I was out the door and on my way.

Monte Carlo of the Orient

I followed up on most of the girls’ recommendations the next day – breakfast at Lord Stow’s Bakery, Portuguese egg tarts at Margaret’s Café – before walking around the southern tip of the main peninsula, where some of the biggest casinos are located. Macau’s reputation as the Monte Carlo of the Orient began in the 1960s, when the government granted a syndicate made up of Macanese and Hong Kong businessmen the monopoly rights to all forms of gambling in the territory, which, at the time, was largely made up of small Chinese gambling houses. The syndicate built large casino-hotels and introduced gambling games popular in the casinos of Europe and Las Vegas, instantly drawing millions of tourists from Hong Kong, eager to live out their Vegas dreams just a short ferry ride across the delta. This arrangement would persist for the next forty years, until shortly after Macau’s sovereignty transferred to China, when China promptly put an end to the monopoly. The old Casino Lisboa, a fixture of the Macanese gambling scene since the 1970s, saw a string of new foreign-operated casino complexes open across the street in a matter of years, like the Wynn Macau and the MGM Macau, as well as the Sands Macau a few blocks over. Veterans of the Vegas Strip, these new casinos offered a thrilling combination of spectacle and luxury as yet unseen in Macau, forcing the old guard to offer similar perks in order to stay competitive. As I approached the low, rectangular Wynn that afternoon, the Casino Lisboa and its newest extension, the Grand Lisboa, towered above the skyline, a greenish-gold glass building purportedly inspired by the lotus flower, or possibly a jet of vomit issuing forth from the heart of Macau, forever and ever. 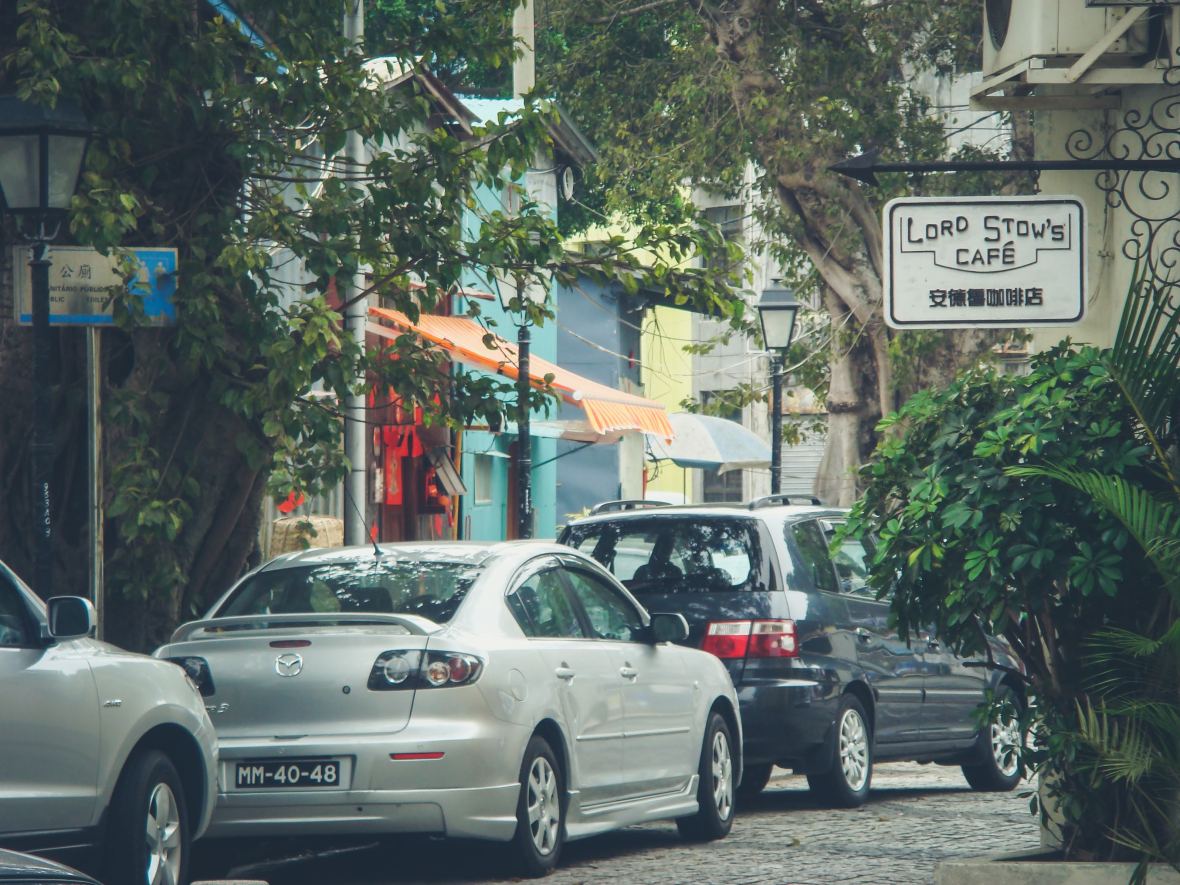 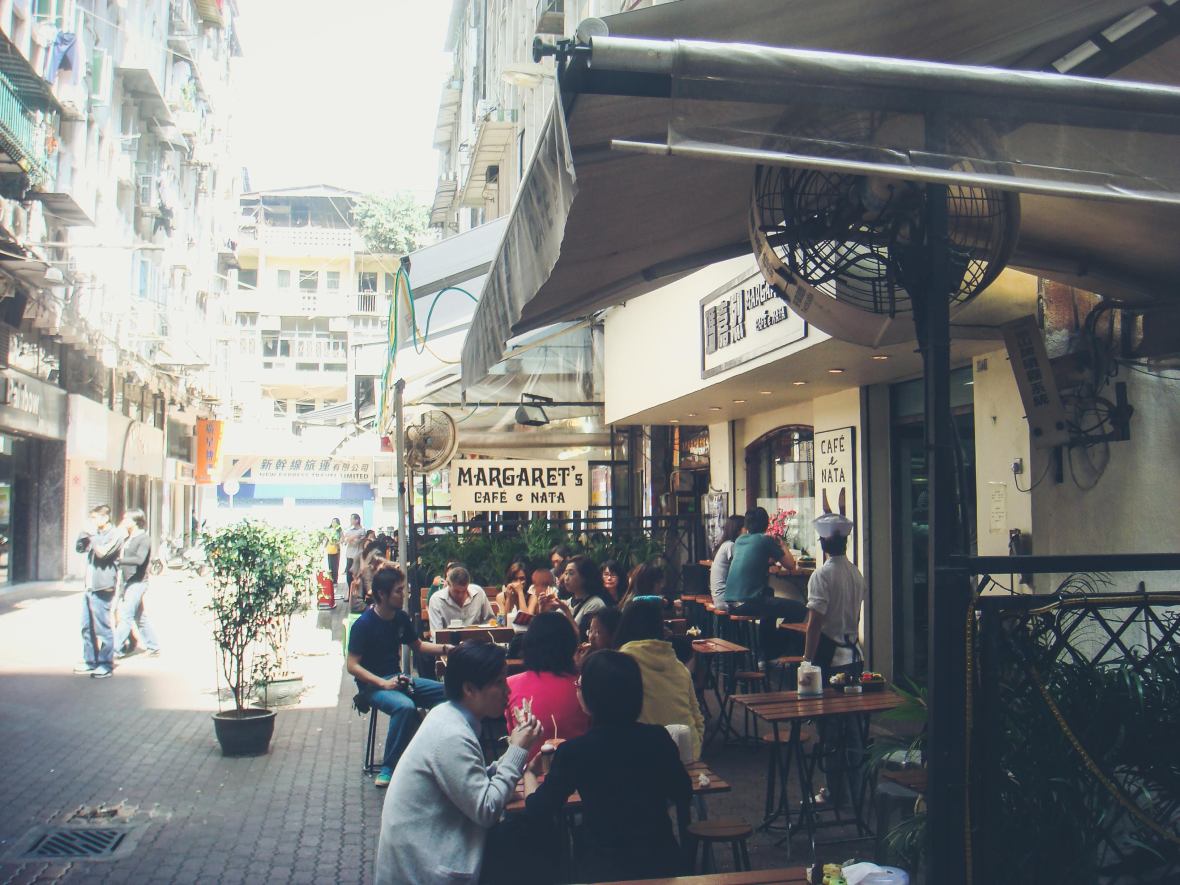 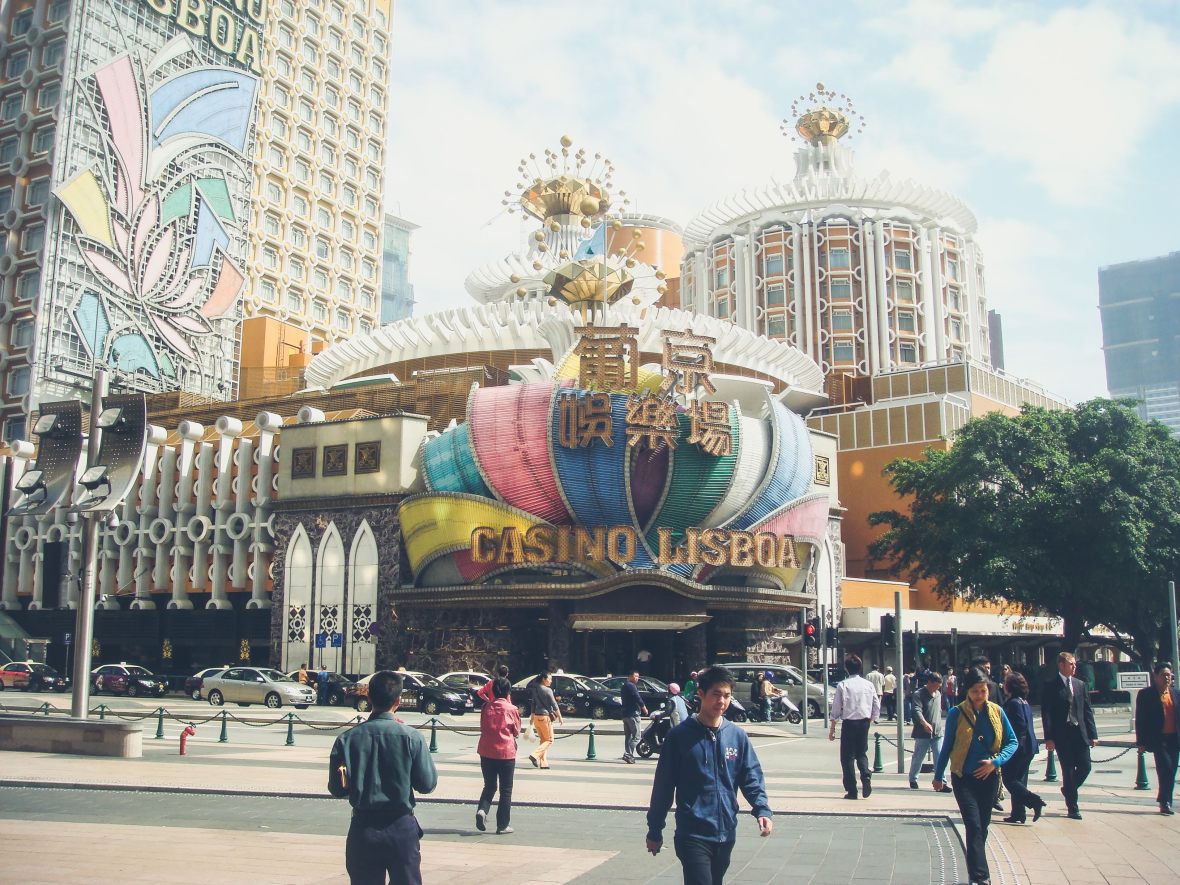 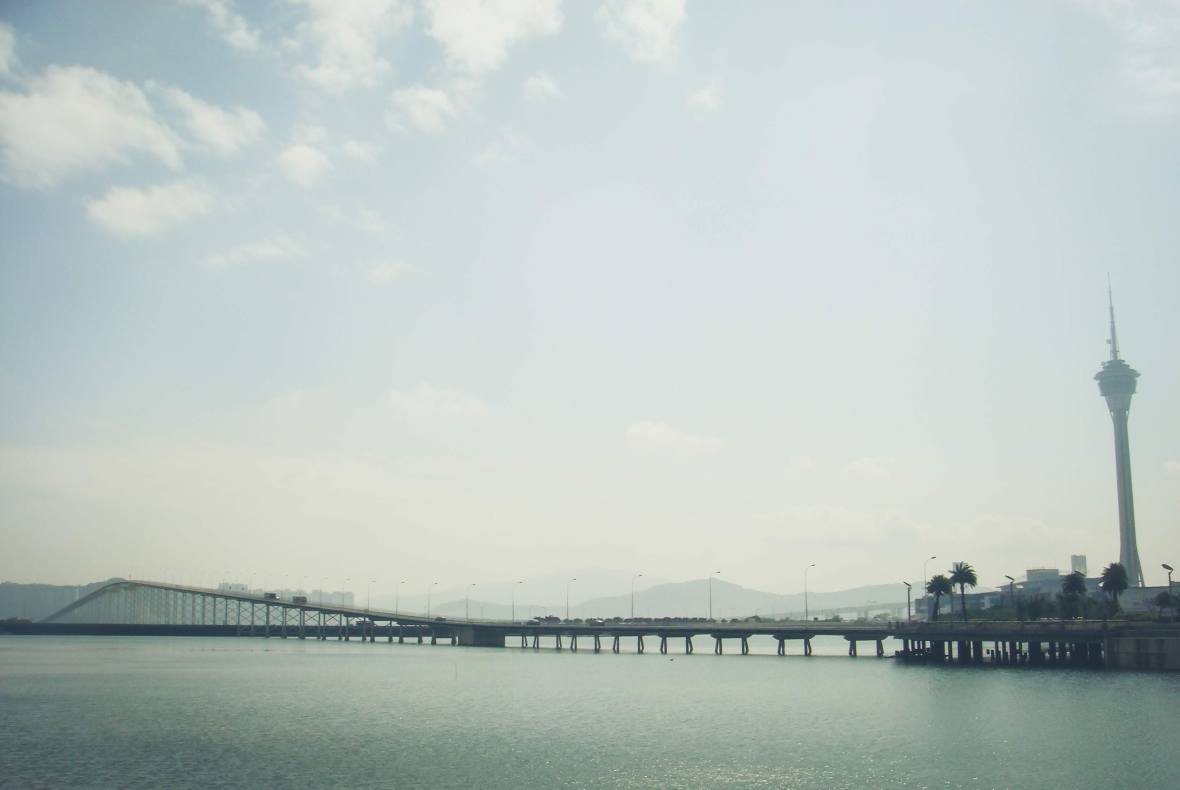 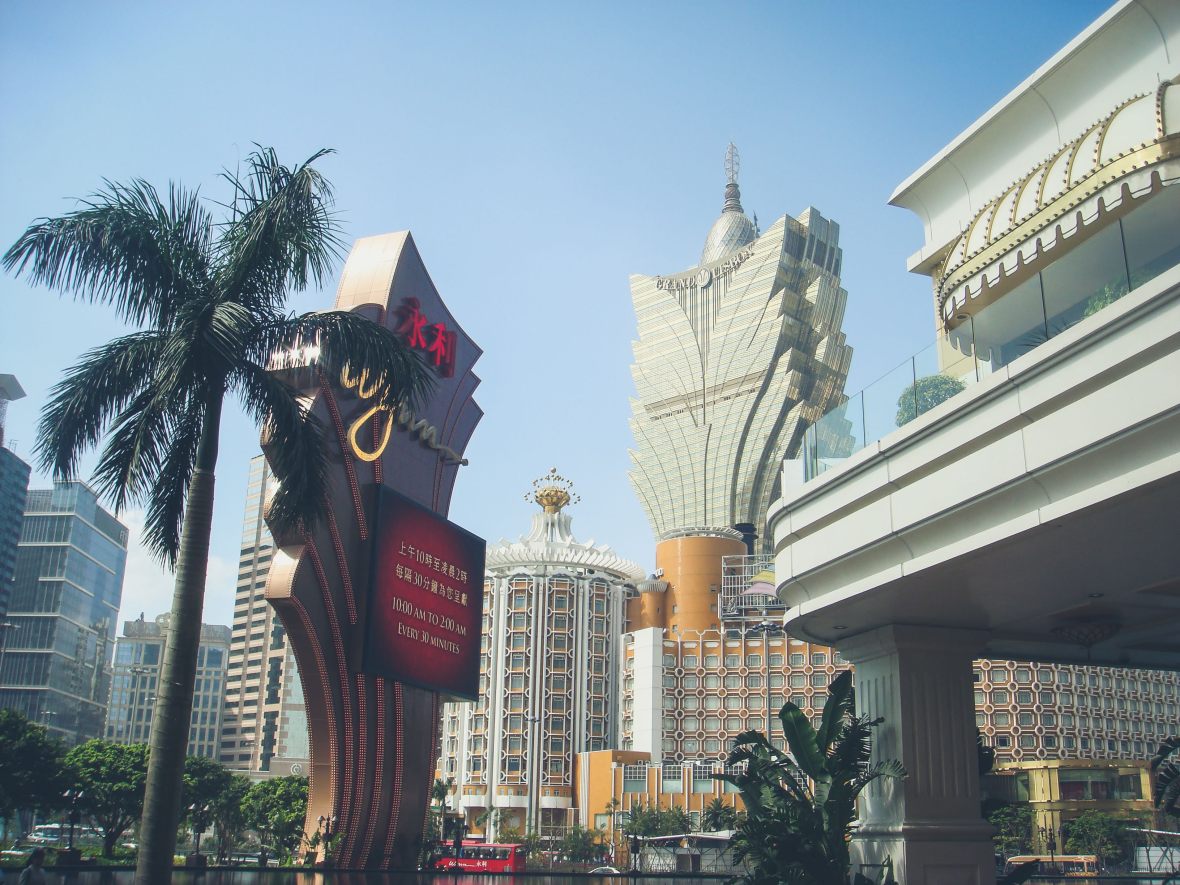 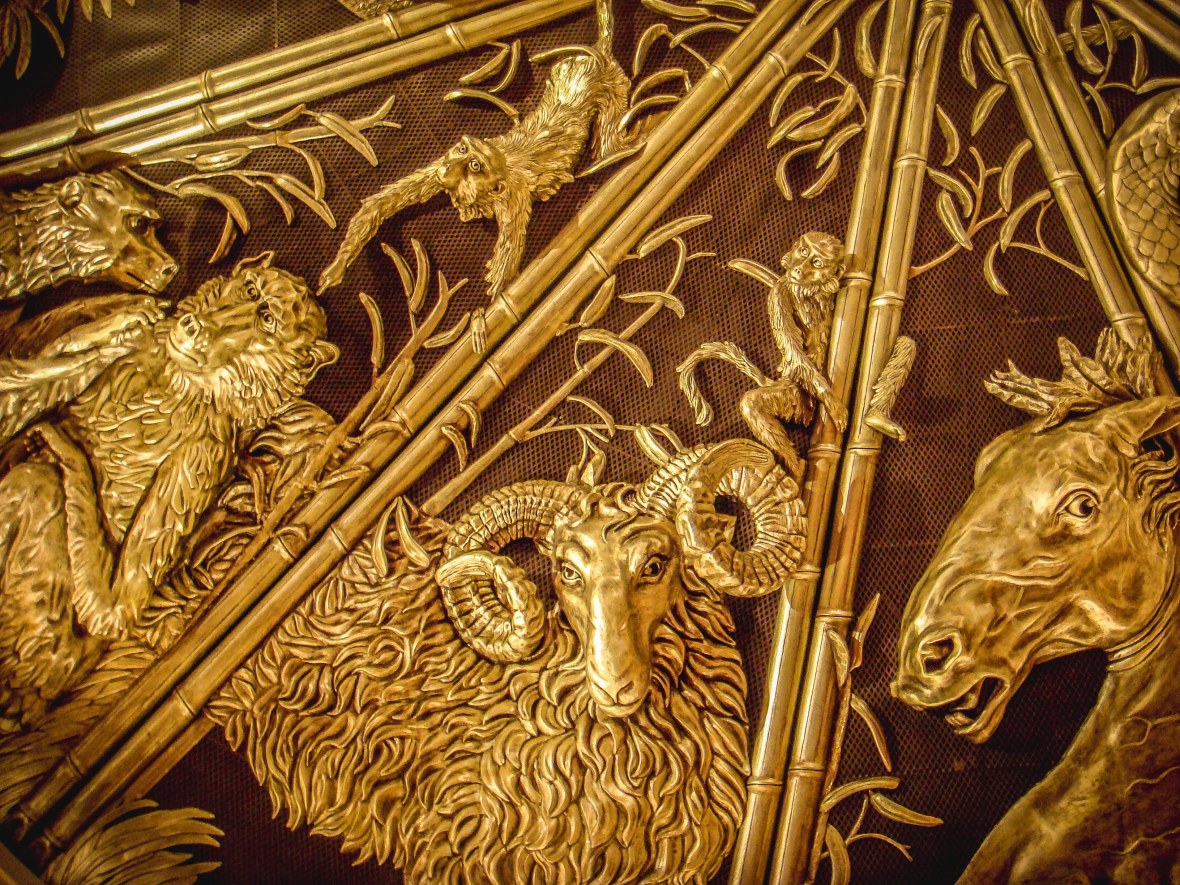 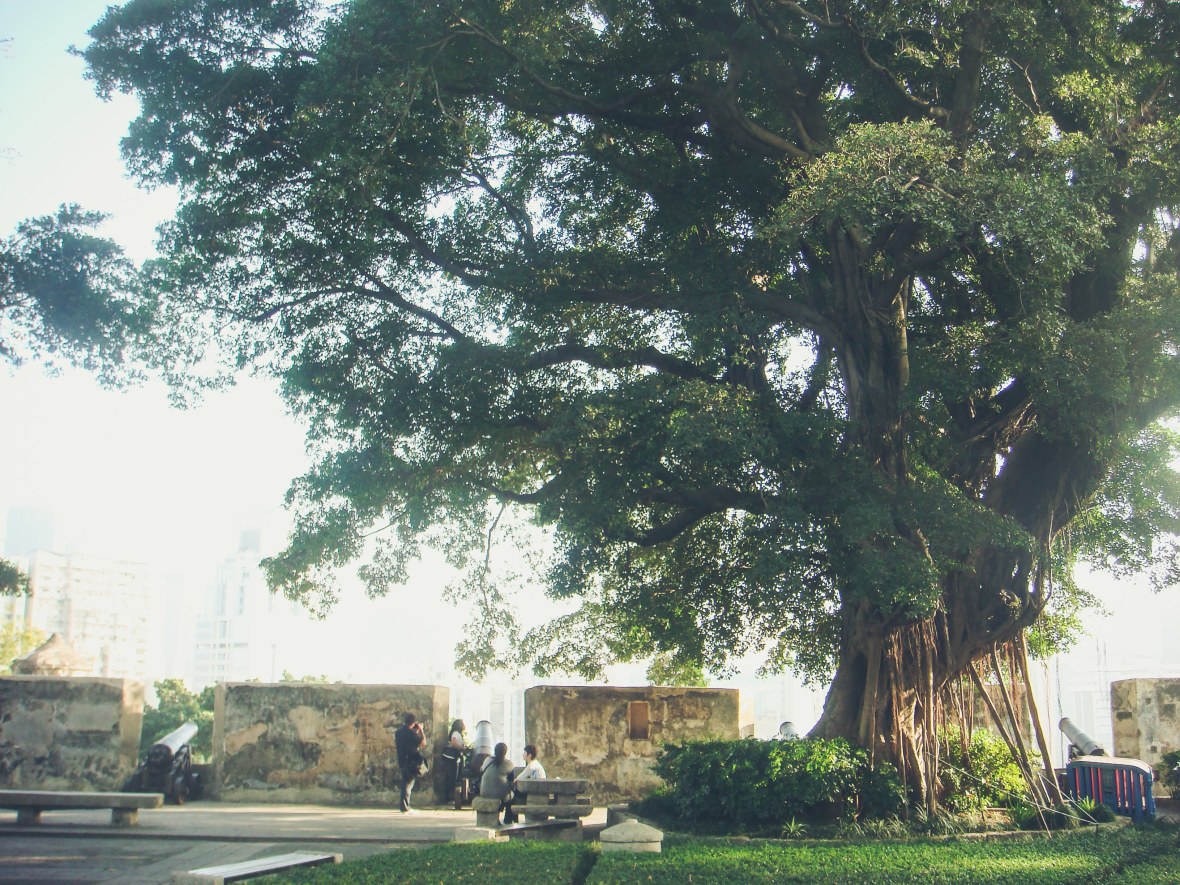 When I returned to Hong Kong later that evening, my parents greeted me at the door. My last week or so in Hong Kong was a blur – it seemed like only a day later that we celebrated my cousin’s wedding, and then I was passed out on a plane, waking up to watch a movie or two, and then fading into dreams again. I’d spent three months goofing off in Asia, and now it was time to go home and start building a life. I had kept a loose grip on the job offer in Hong Kong – it was a verbal offer, which made it seem less than real, like it might disappear if I took it too seriously – and there were still a few loose ends in my life back home that needed to be addressed. A week after I got back, however, the company contacted me again to ask if I was still interested, and this time I had an answer. Three months later, I was on a plane to Hong Kong, one-way ticket tucked into my back pocket. 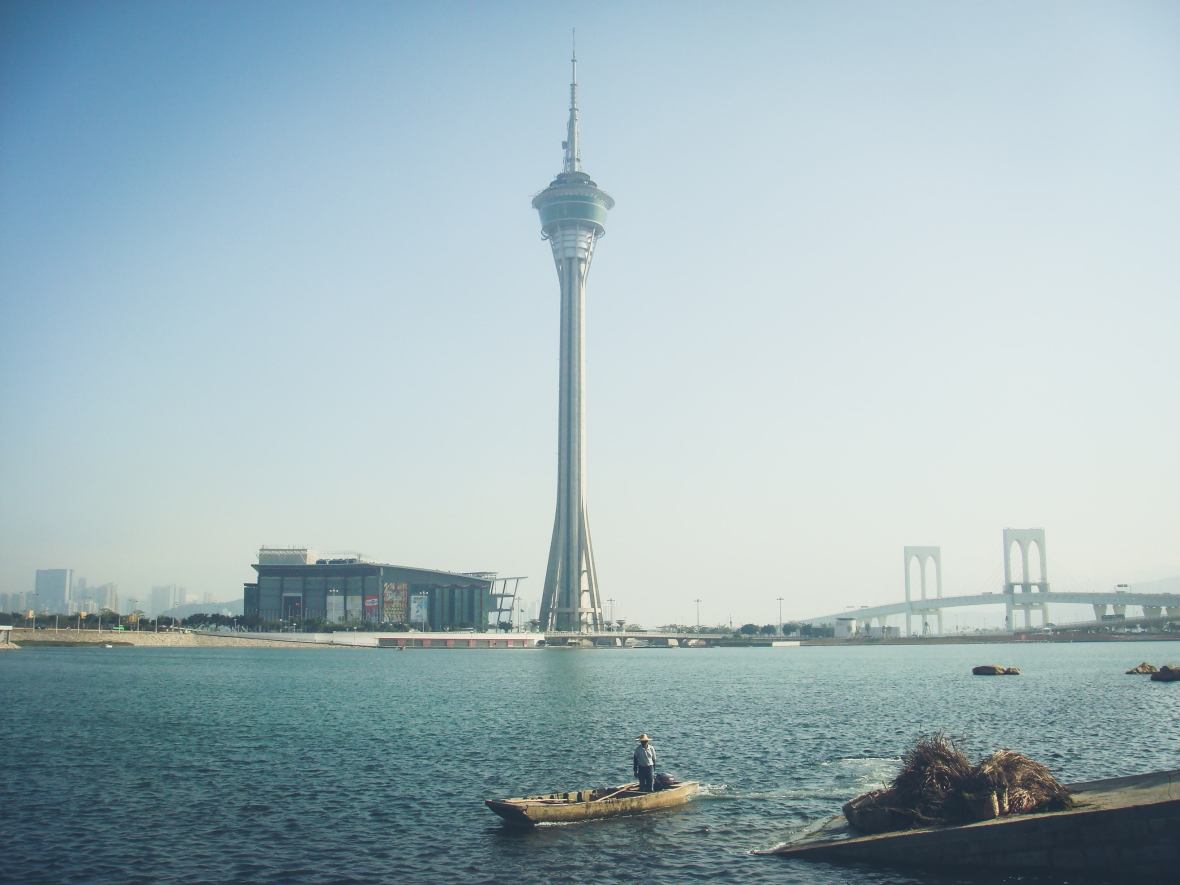