Breakfast the next morning took place on a small patio looking out on the twin peaks of Mount Machhapuchchhre. We sat at the wooden table sipping our little, white porcelain cups of Masala chai, trying to stretch the morning out for another few minutes, watching the other trekking groups disappear down the trail, one by one. Our trek today would take us from Tadapani to Ghandruk, the second largest village in the region, and, in contrast to the first few days of the trek, it would be mostly downhill. Over the next couple days, the trail would loop around and start heading back towards Birethanti, the town where we had started our journey. Our guide eventually convinced us to get on our feet, and we spent the morning hiking through dense forest. At around mid-morning, the forest gave way to a broad valley, and we stopped at a rest house by a river to grab a quick meal. 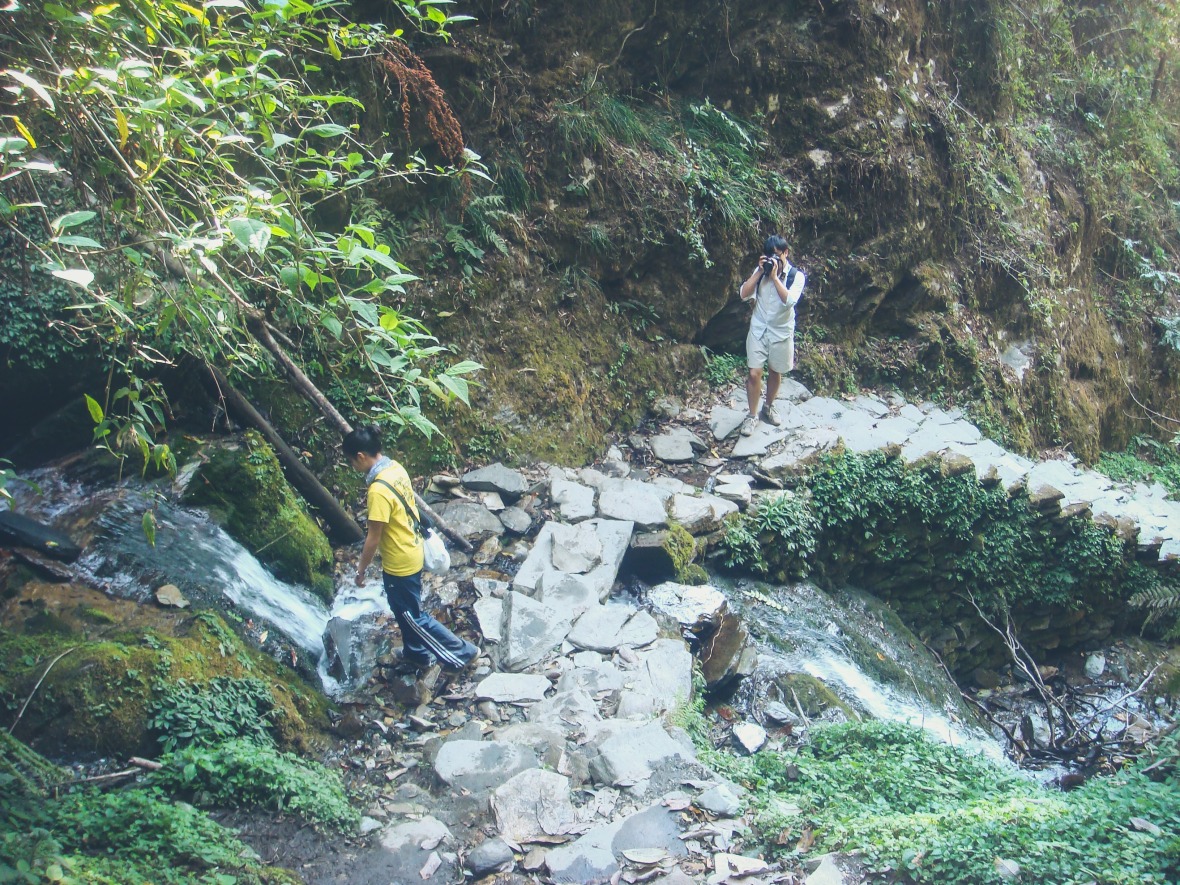 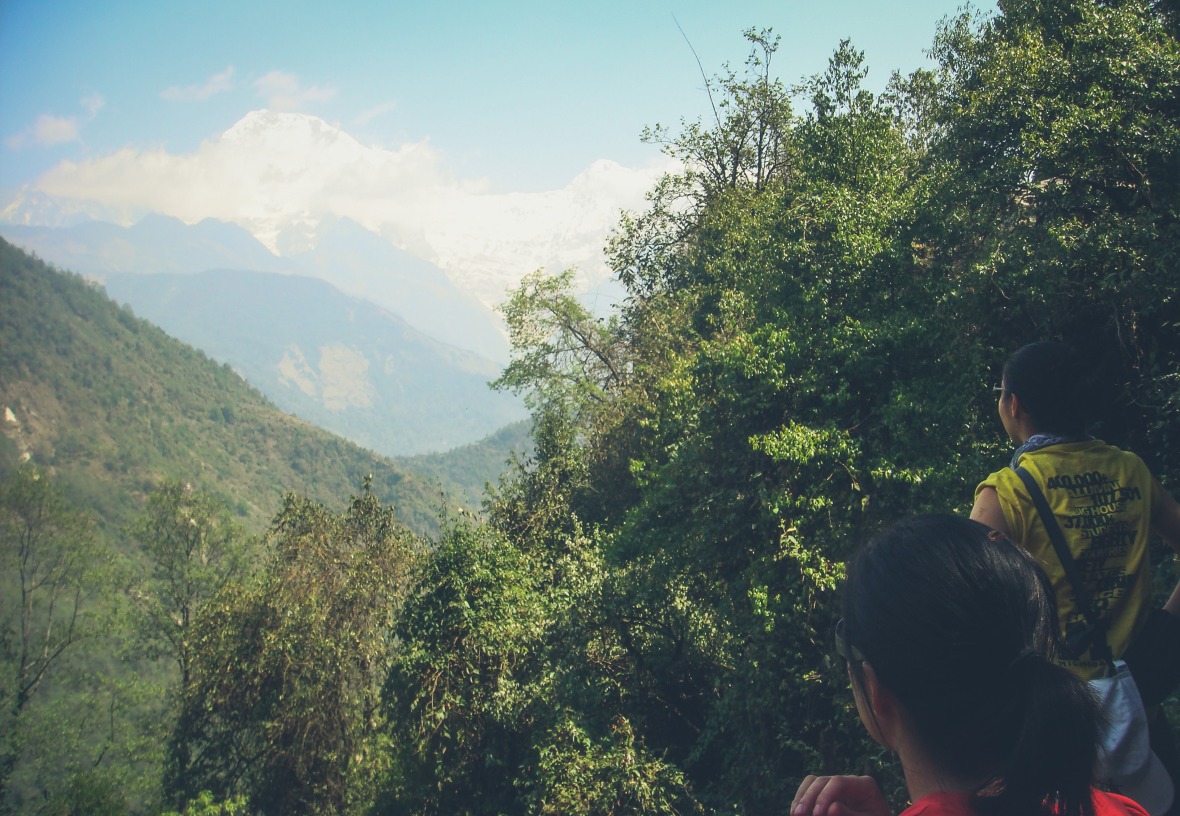 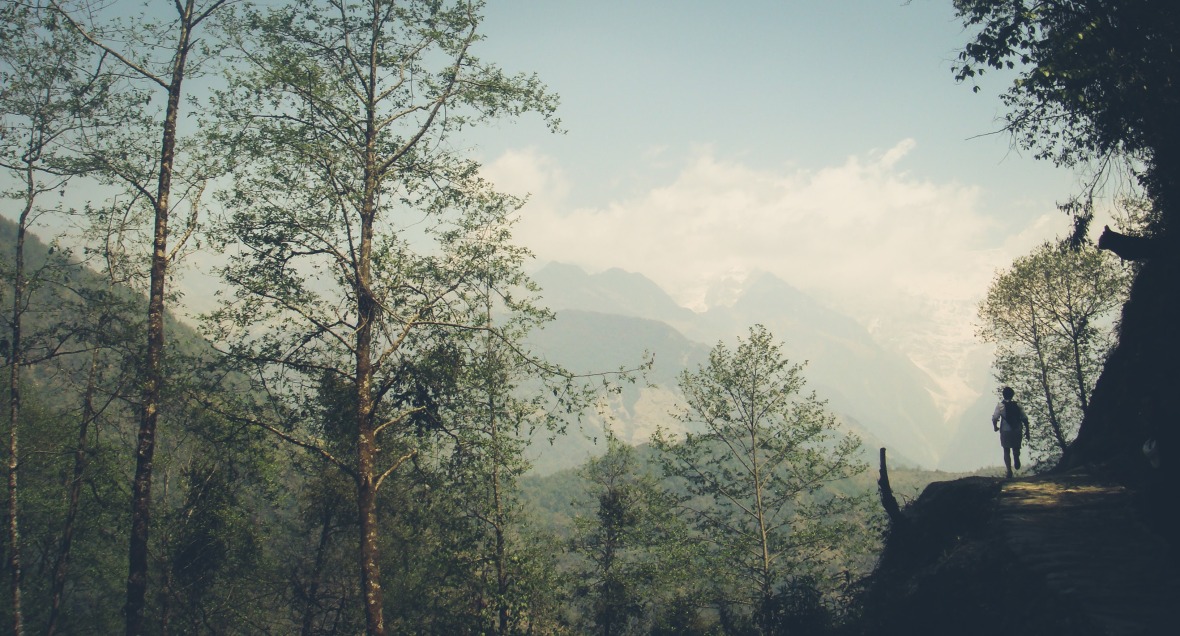 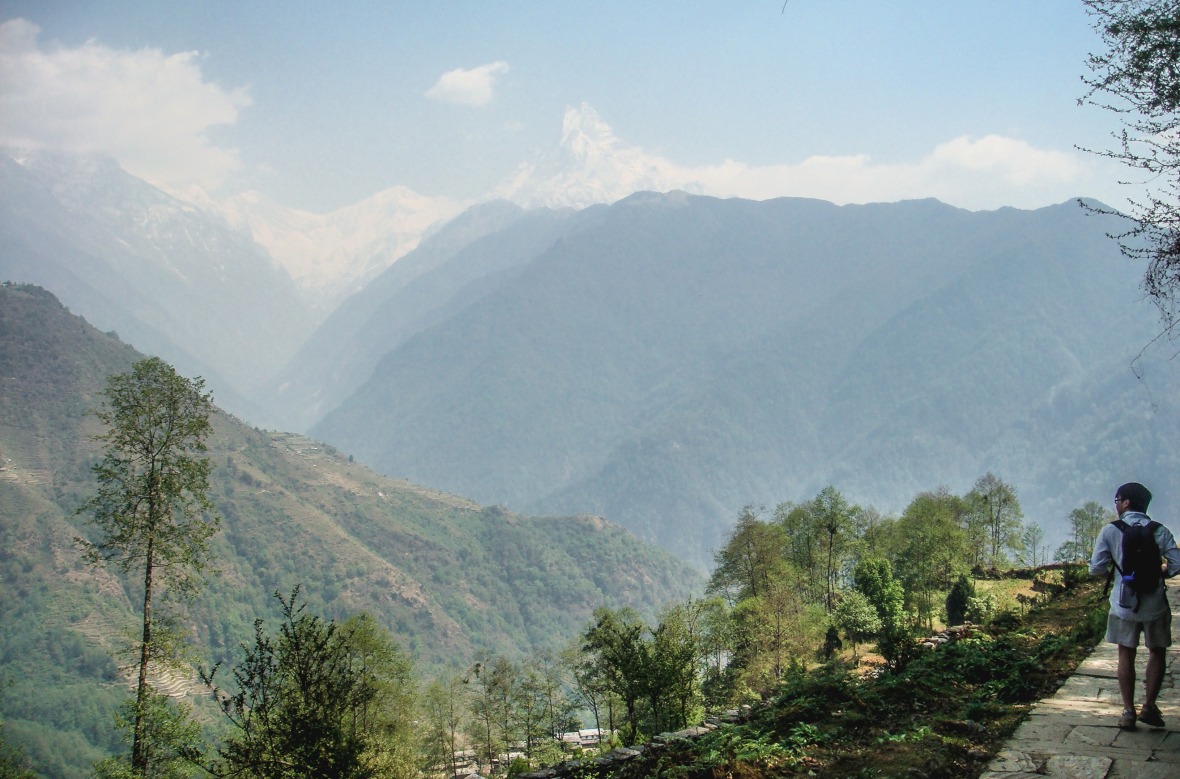 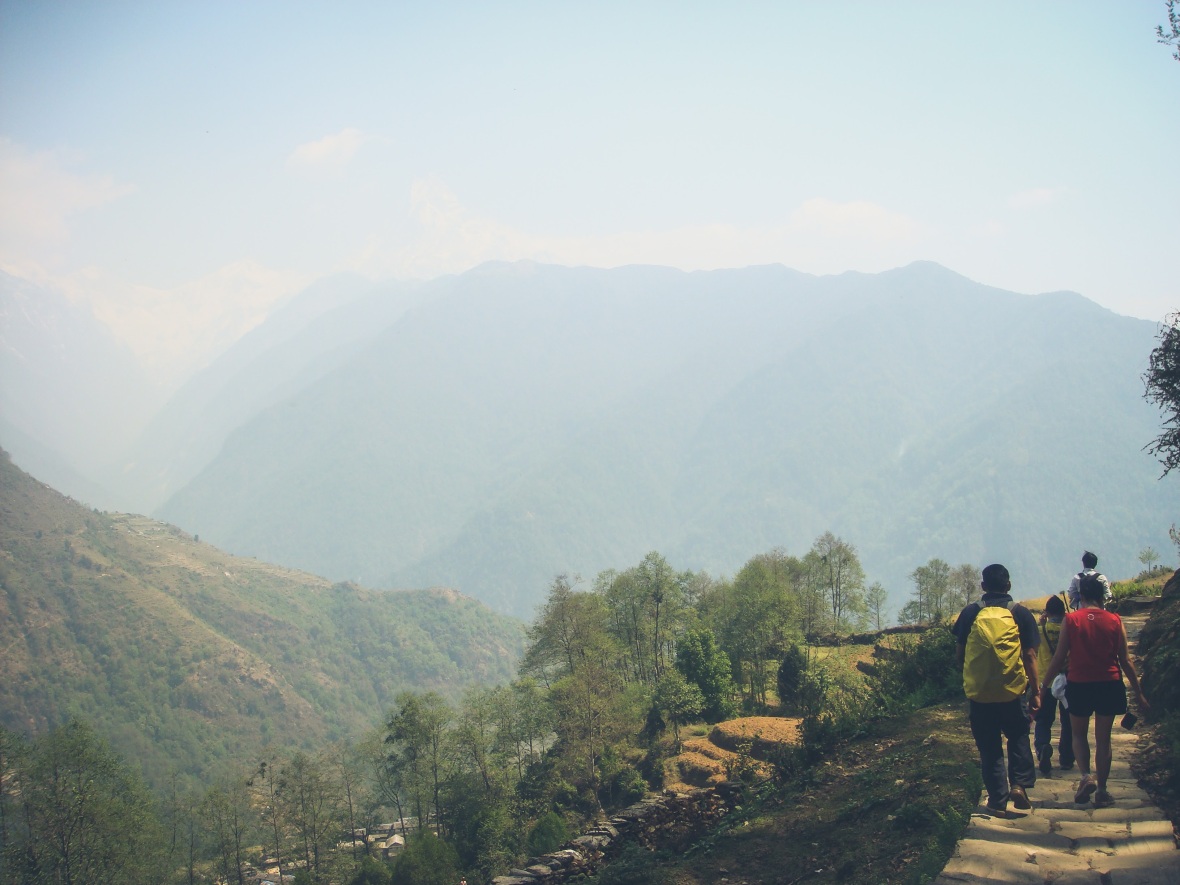 Not long afterwards, we emerged onto a terraced hillside dotted with small hamlets and villages, perched precariously on the edges of the cliffs surrounding us. We followed the trail as it skirted around hills and rocky outcroppings, taking in the view of the valley below us and the mountains beyond. As we approached the villages, the traffic picked up and we were accompanied by donkeys, farmers, school children, and other trekkers. The density of the hillside dwellings continued to increase, and, before we knew it, we found ourselves in Ghandruk proper. We entered the village from above, walking down a set of stairs carved into the hill, curving around the inside edge of a natural bowl formation. It was relatively quiet, with the exception of a group of women working on one of the farming terraces. 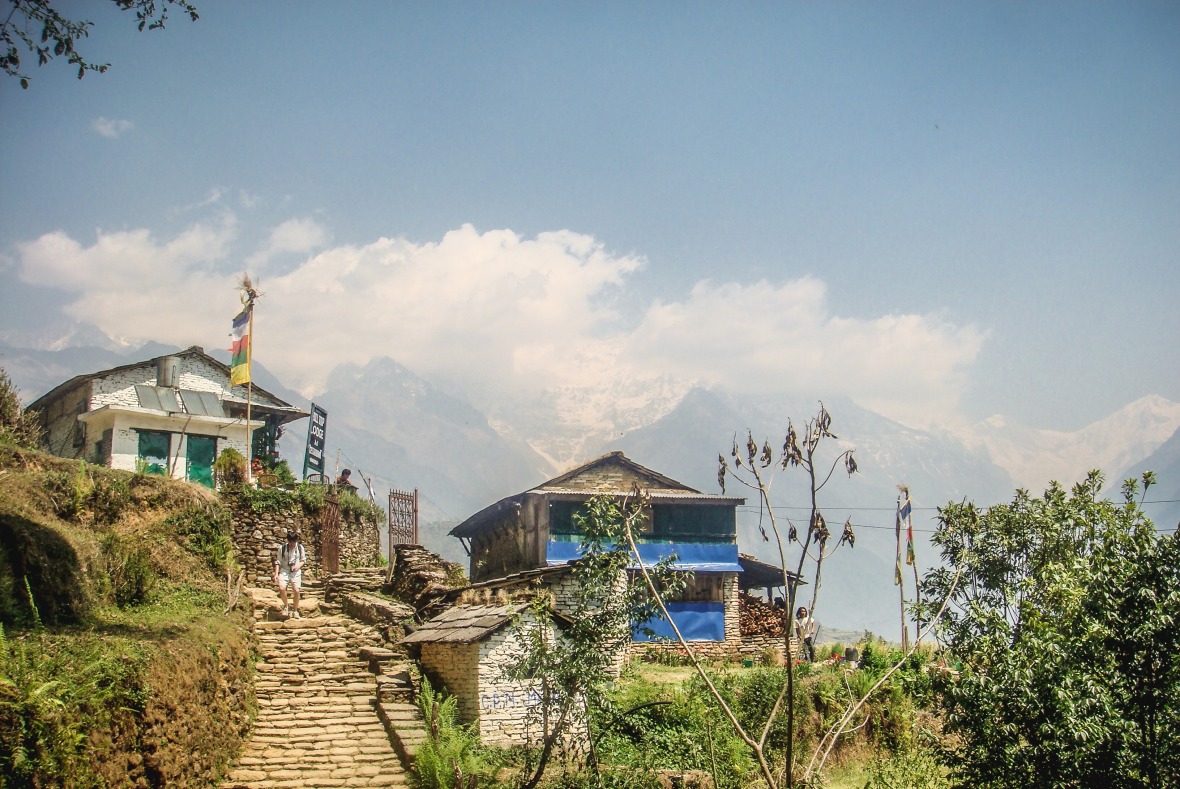 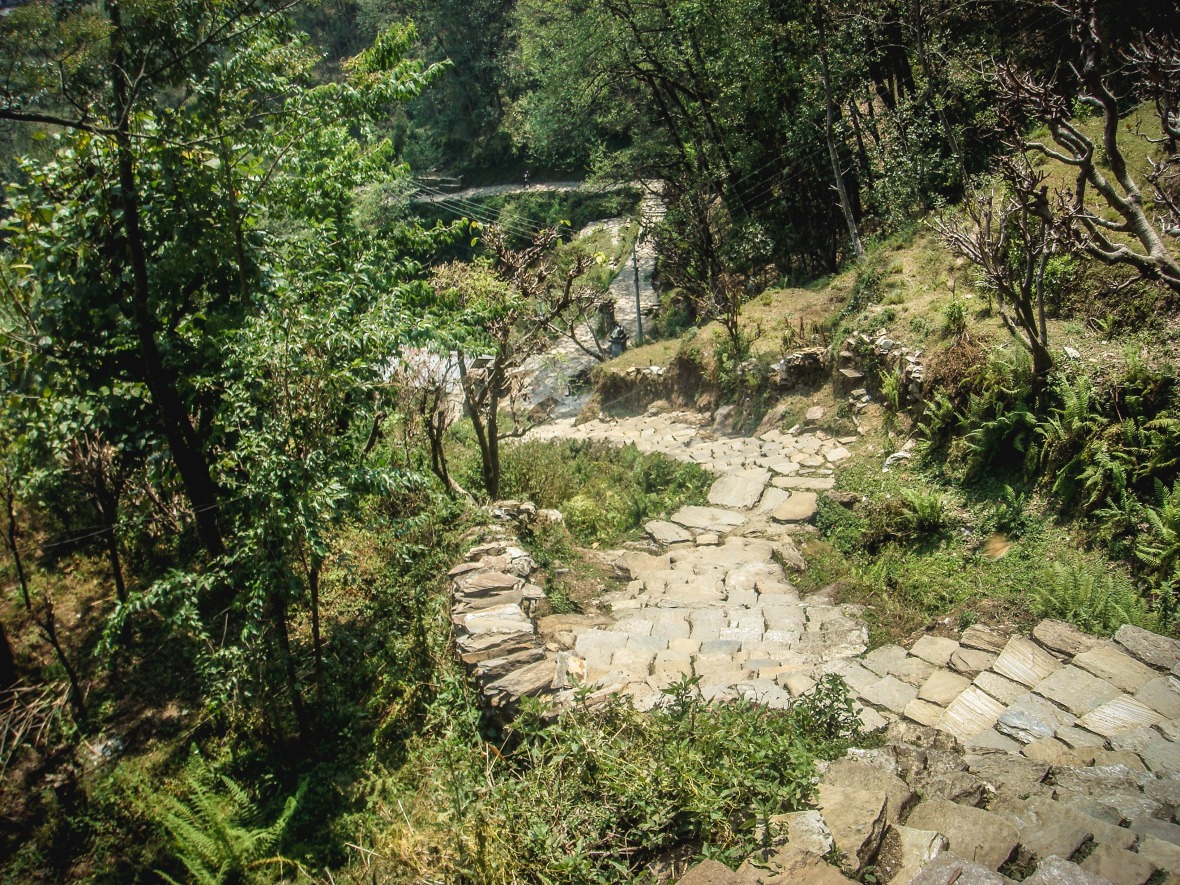 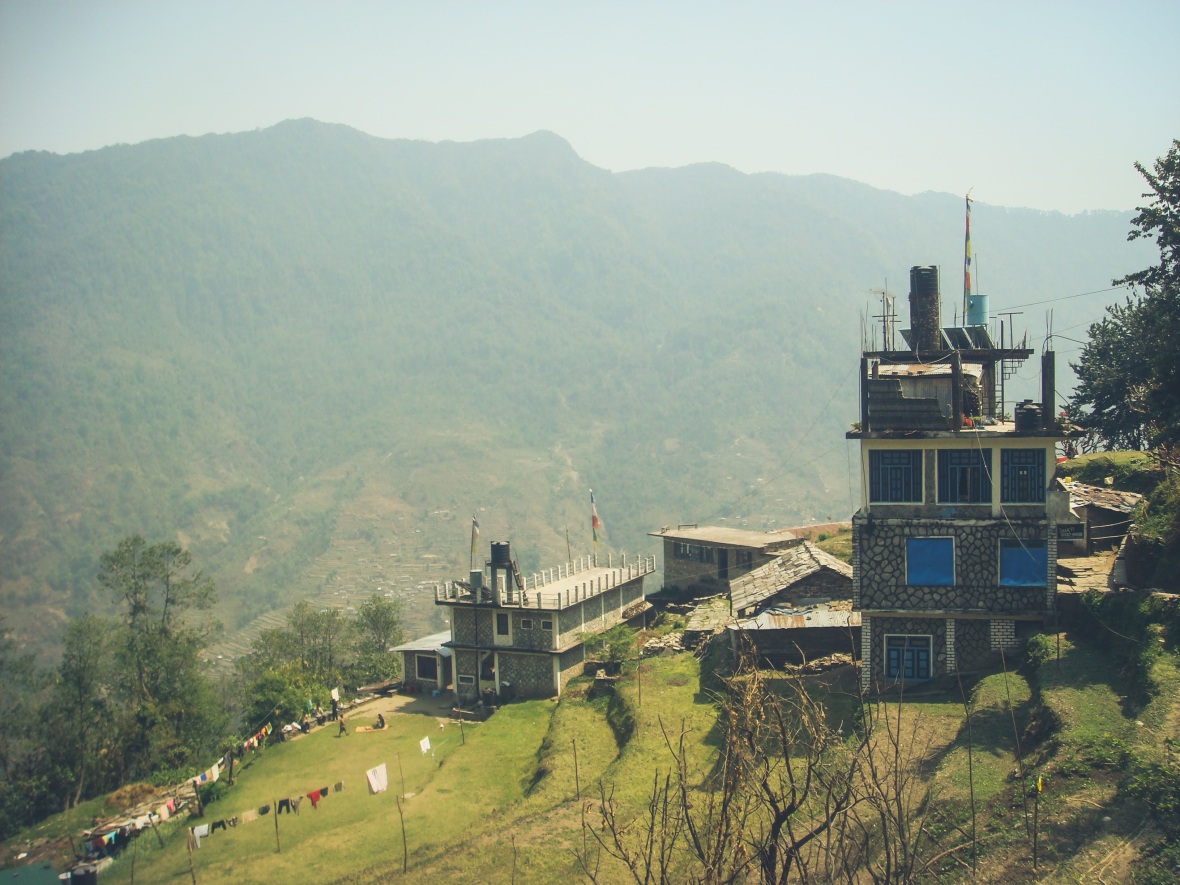 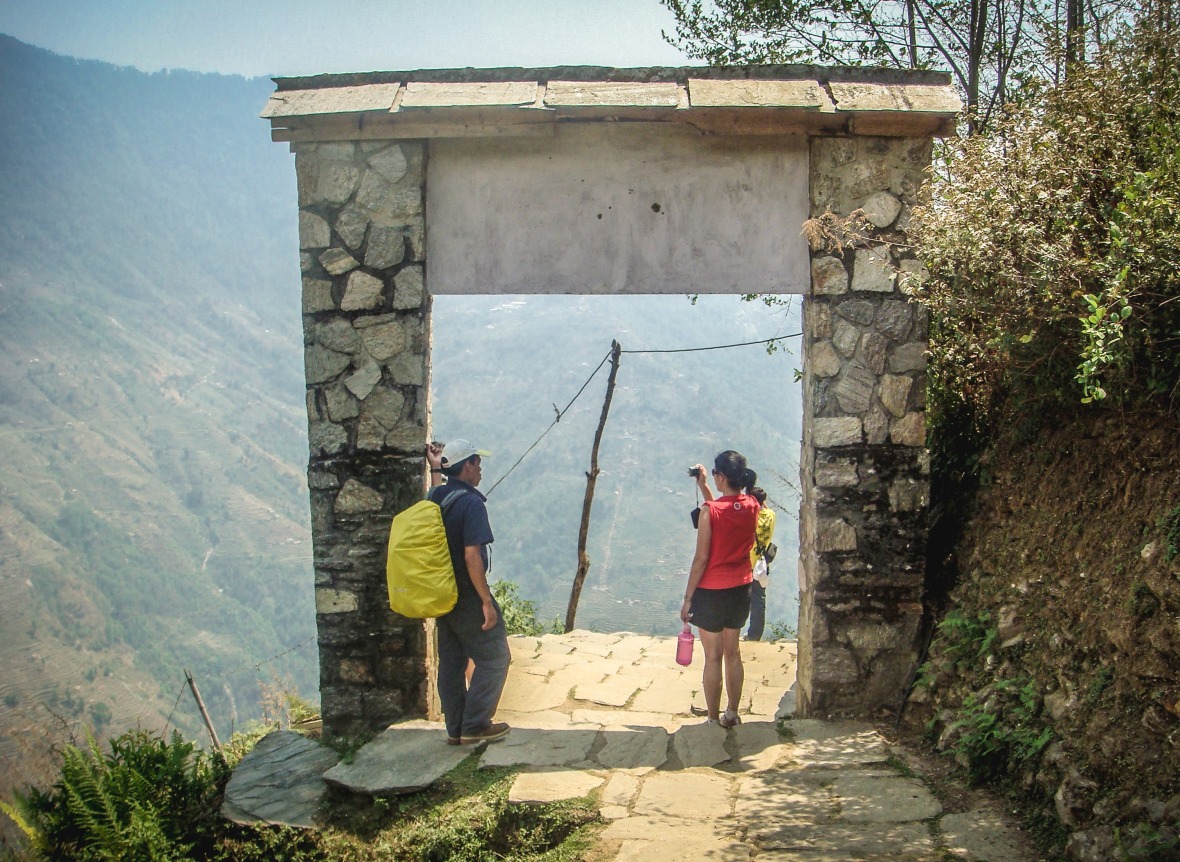 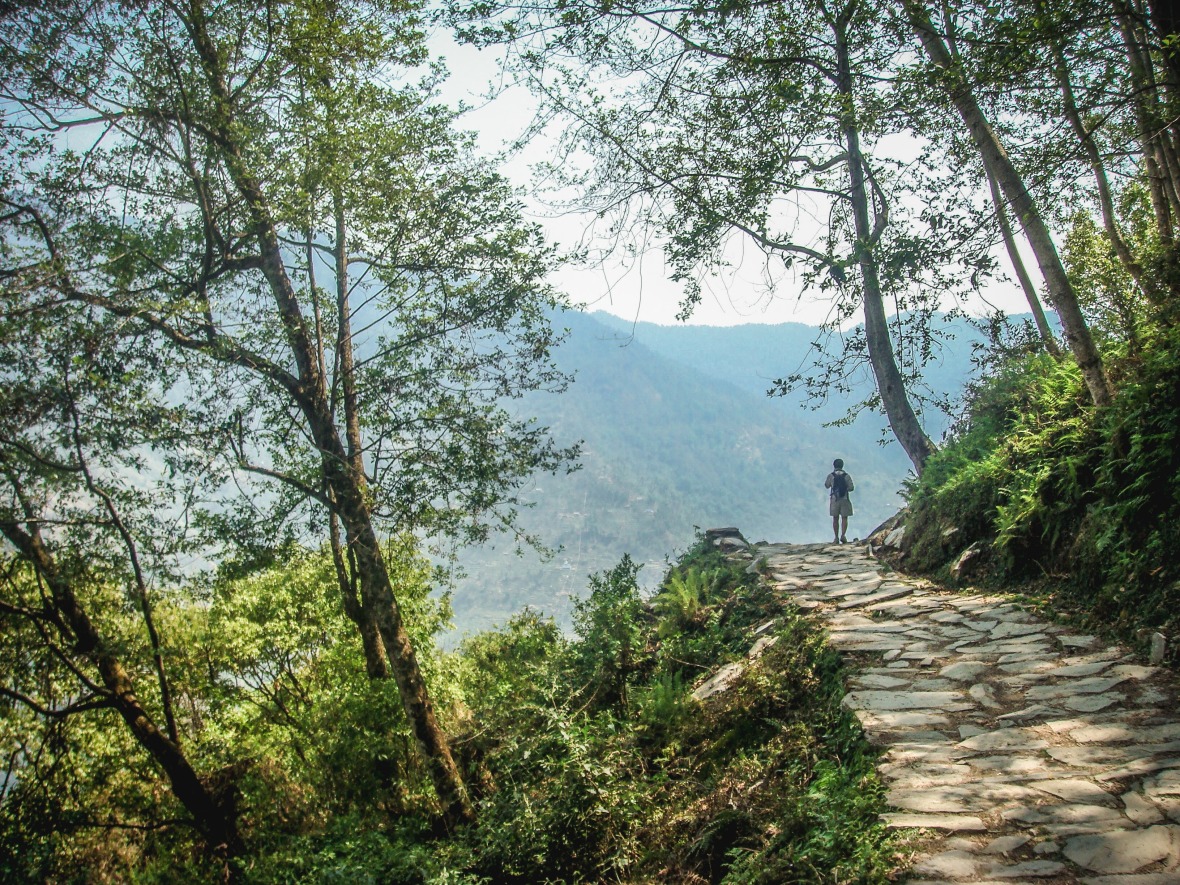 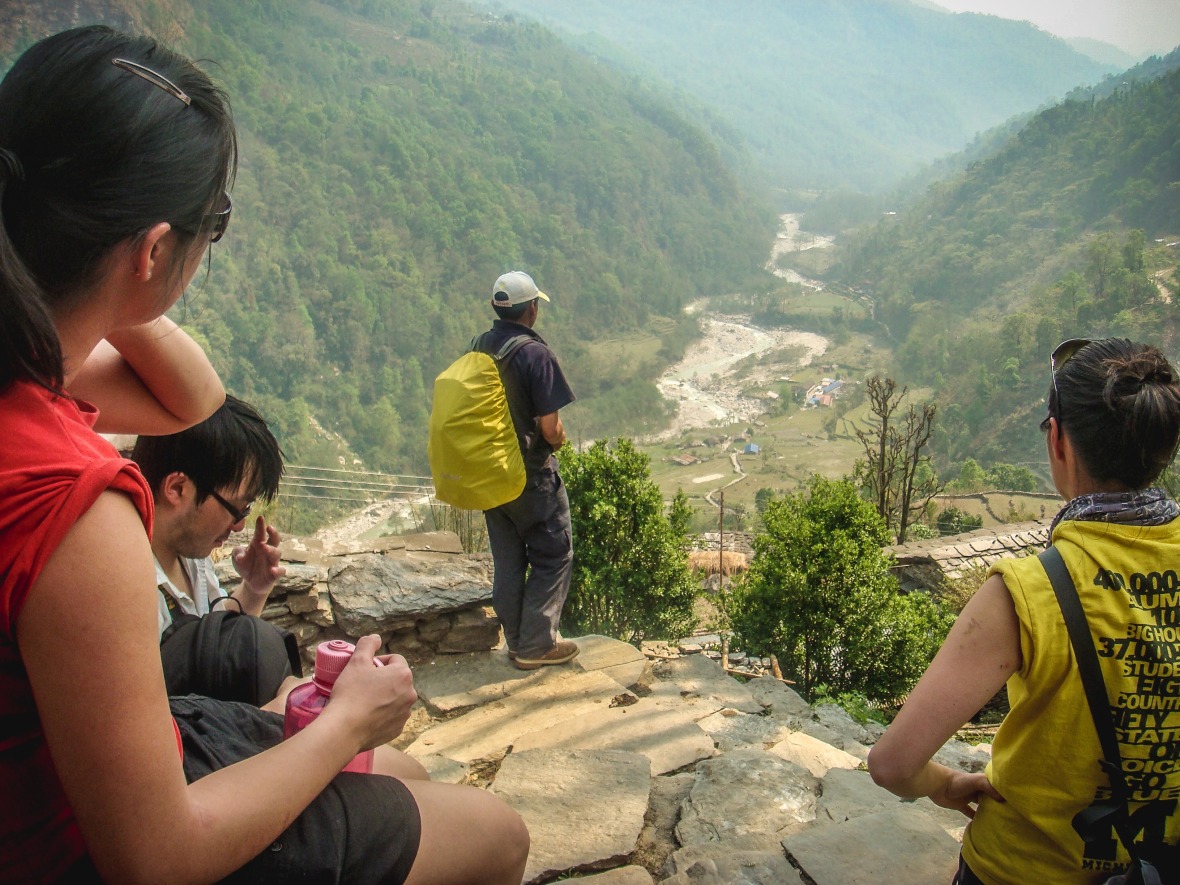 A Dip in the Modi Khola

After stopping for lunch, our trek continued beyond the borders of Ghandruk, and our guide pushed us to make better time. From here on out, the trail would descend much more quickly – our destination was a guesthouse on the banks of the Modi Khola River, far below us. The scenery remained much the same – steep hills terraced from summit to precarious cliff, before dropping off into the gorge below. It was a slow descent, taking us all afternoon to reach the bottom and cross the bridge to our final guesthouse. We cooled off in the river afterwards – Derek tried to swim through the rapids but the current was too strong – and then we hung out with our guide and porter for the rest of the night. 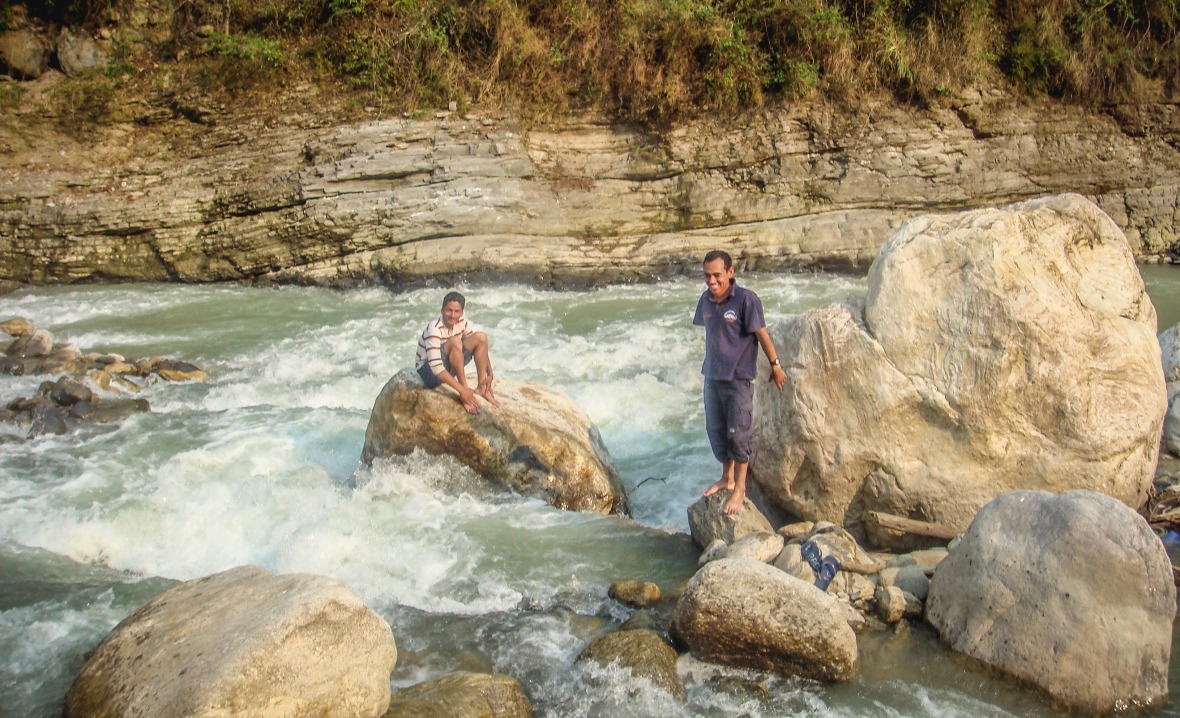 The next morning, after draining the last of our Masala chai teacups, we walked the short distance between the guesthouse and Birethanti, the town where we had started our trek a few short days ago. We said our goodbyes to our local guides, and then we piled into a van for the ride back to Pokhara. From there, we had the option of flying back to Kathmandu in thirty minutes, or hiring a car and a driver to take us cross-country, a trip that we were told would take around four hours. We had debated the merits of both while we were still in Hong Kong, but, in the end, we voted to take the car – we imagined it to be a leisurely, air-conditioned drive through beautiful Himalayan countrysides. This was a colossal mistake. The drive ended up taking well over eight hours, as the car needed to stop every hour to cool down, though the frequency of the stops increased as the day went on. We stopped and started our way across Nepal, dust flying in through the open windows, the only music a never-ending loop of Shakira and Akon for endless hours. 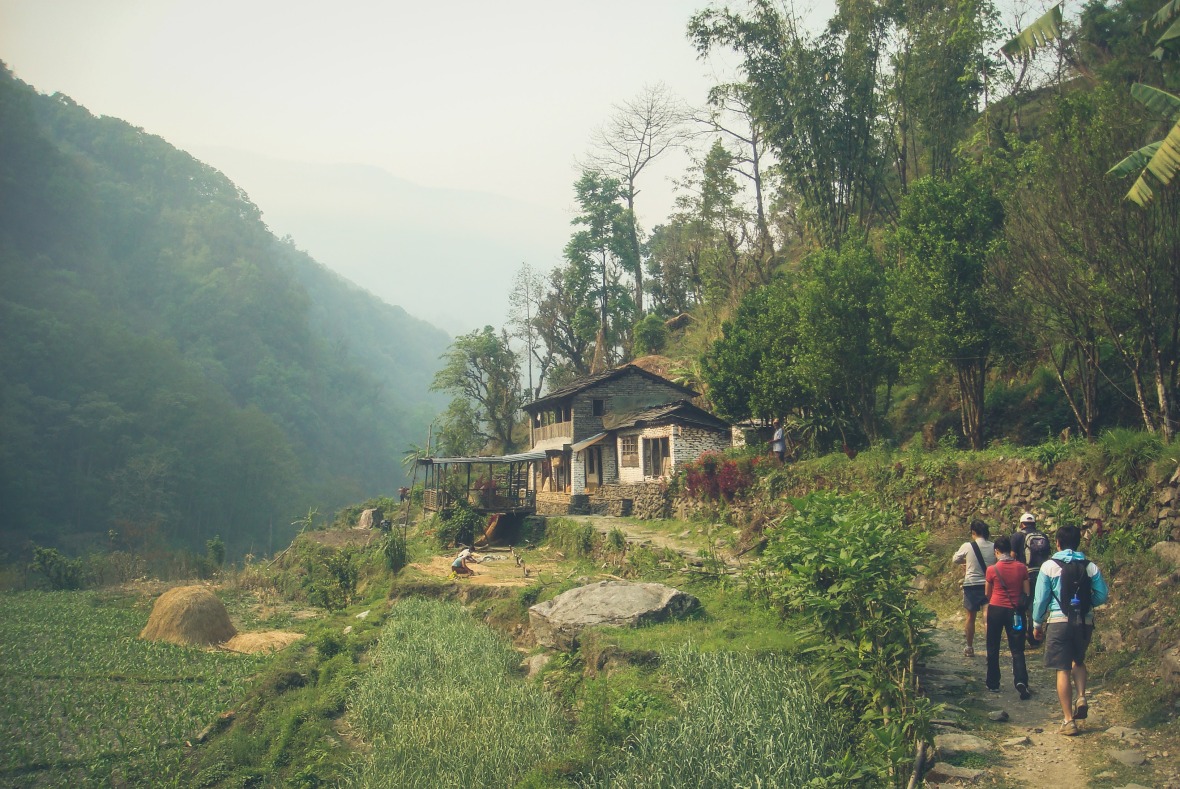 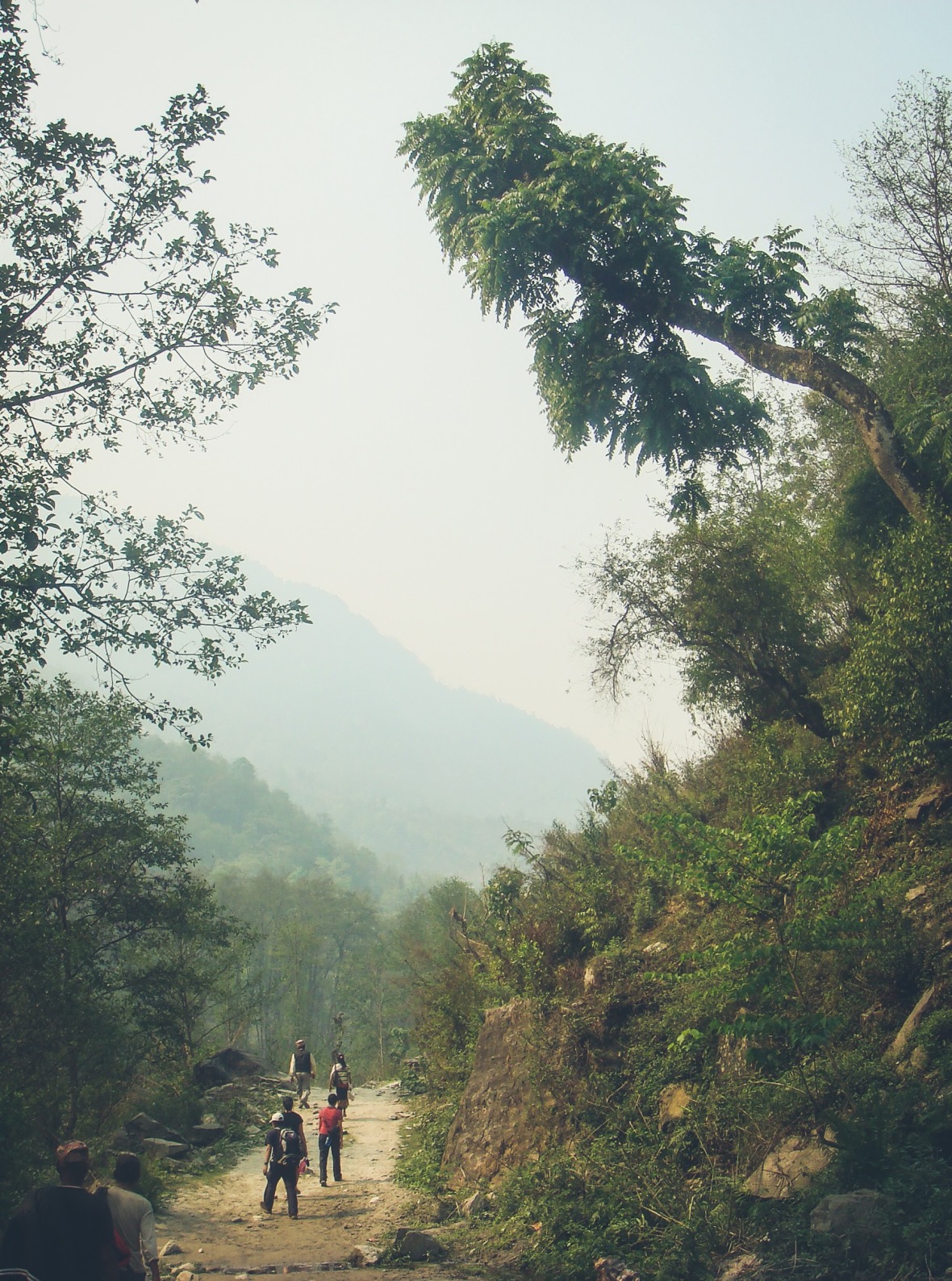 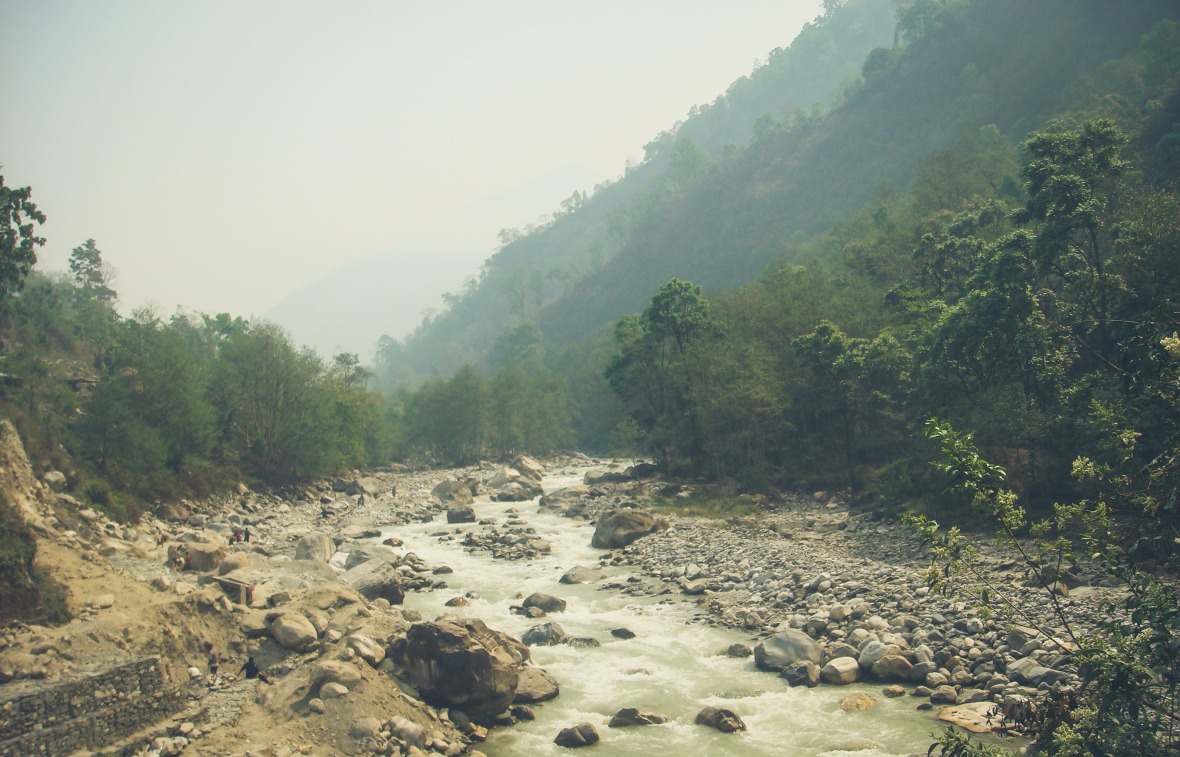 A Most Unfortunate Car Ride

At times, the roadside scenery was beautiful – lush, terraced valleys, the snow-topped mountains still gleaming in the distance – but we had little opportunity to enjoy them for fear of dying. Our fearless driver flung us back and forth on the dusty highways, careening around blind turns on the wrong side of the road, and overtaking vehicles at reckless speeds on narrow cliff-sides. More than once, we swung out wide on a turn, only to just miss being crushed head-on by a speeding lorry. There was one sharp turn at night while on a cliff, without any railings, where we all agreed that at least one of the tires had spun out partway over the edge, a mini-landslide of rocks and gravel echoing in the darkness behind us. About an hour or so outside of Kathmandu, long after the sun had gone down, the engine sputtered out, and we were left with the prospect of being stranded in the pitch black countryside. Villagers materialized out of the darkness, huddling around the open hood of the car, offering suggestions and advice to the frazzled driver. Derek, Cora, and Vikki trudged over to a nearby village to call the operator that had arranged the ride for us, while I stayed behind to keep our backpacks company. Something must have worked, eventually, as the engine miraculously re-started, but we must have been sitting in the middle of the road for over an hour. We were finally on our way again, but not for long. As a final touch, the car broke down for good on the city outskirts, and our driver had to wave down a taxi to take us the rest of the way. We weren’t exactly happy, but it could have been a lot worse. By the time we arrived at our lodgings, the absurdity of our day’s journey outweighed the frustration and the anxiety, and the only response was laughter.

We spend the last couple of days walking around Kathmandu. Derek had a guidebook with a list of things to see marked out, so we mostly just followed him around. On our last night, we went in search for a bar to grab a drink after dinner. One of the girls heard live music from the second floor of a building, so we went in and found ourselves in a dimly lit bar with, indeed, live music. The band was playing covers of songs from the 80s, and, after deciding that the place was “good enough”, we slid into a side booth to while away the evening. After maybe half an hour, Derek went back to our guesthouse to get some rest, but the girls and I chose to stay behind for a little while longer. Unbeknownst to us, however, the bar had slowly emptied out as the night wore on, until we were the only group still occupying a table. I slowly became aware of some twenty-something looking guys gathered at the entrance, half obscured by the shadows and general lack of decent lighting in the establishment, and they very casually made their way over, asking if they could join us. The leader of the group, Subash, sat down beside me, while the others pulled up chairs or leaned against the bar countertop.  We traded small talk for a while, before he declared that he was the leader of the gang that controlled this part of Kathmandu, and that his presence at our table was protecting us from certain physical harm. Whatever doubts I had about the veracity of his claim, I was definitely not in any position to put it to the test, and I was acutely aware of just how many of his friends were filling up the bar. 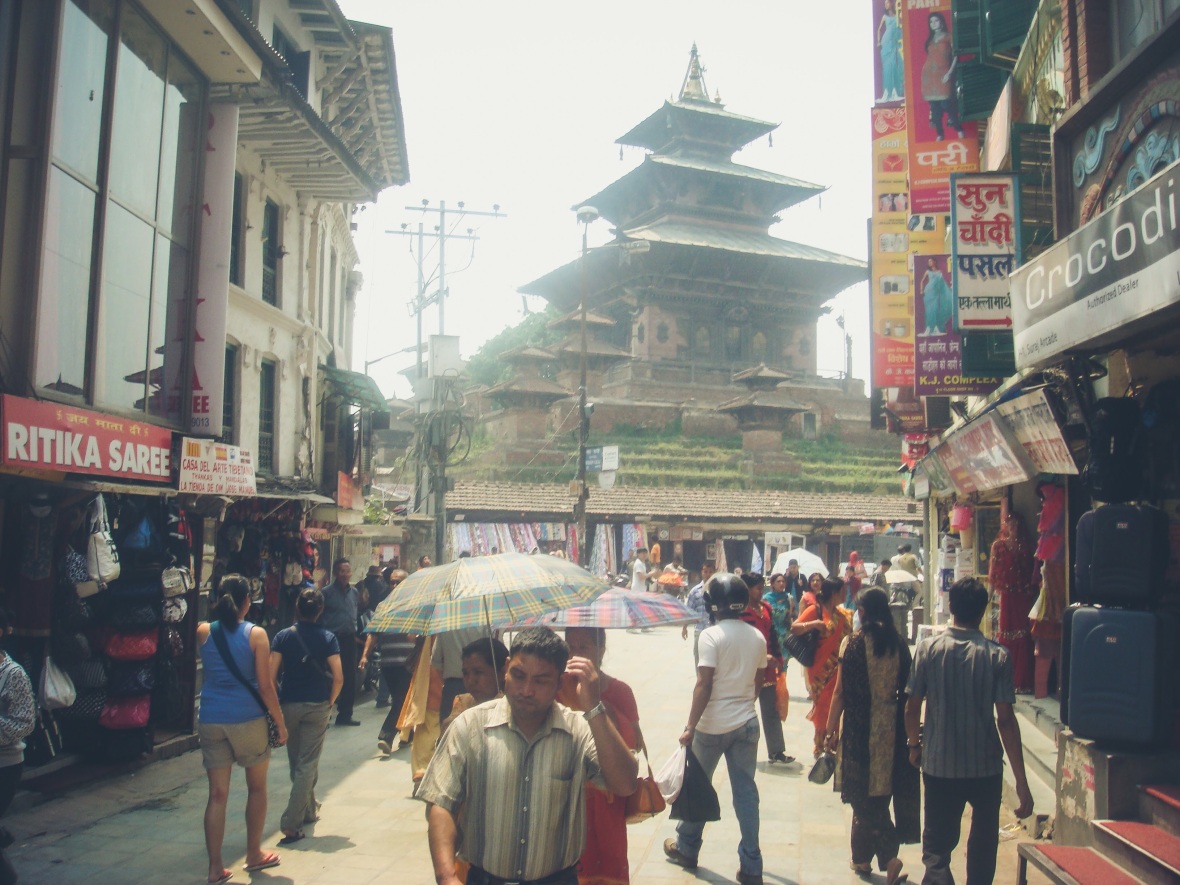 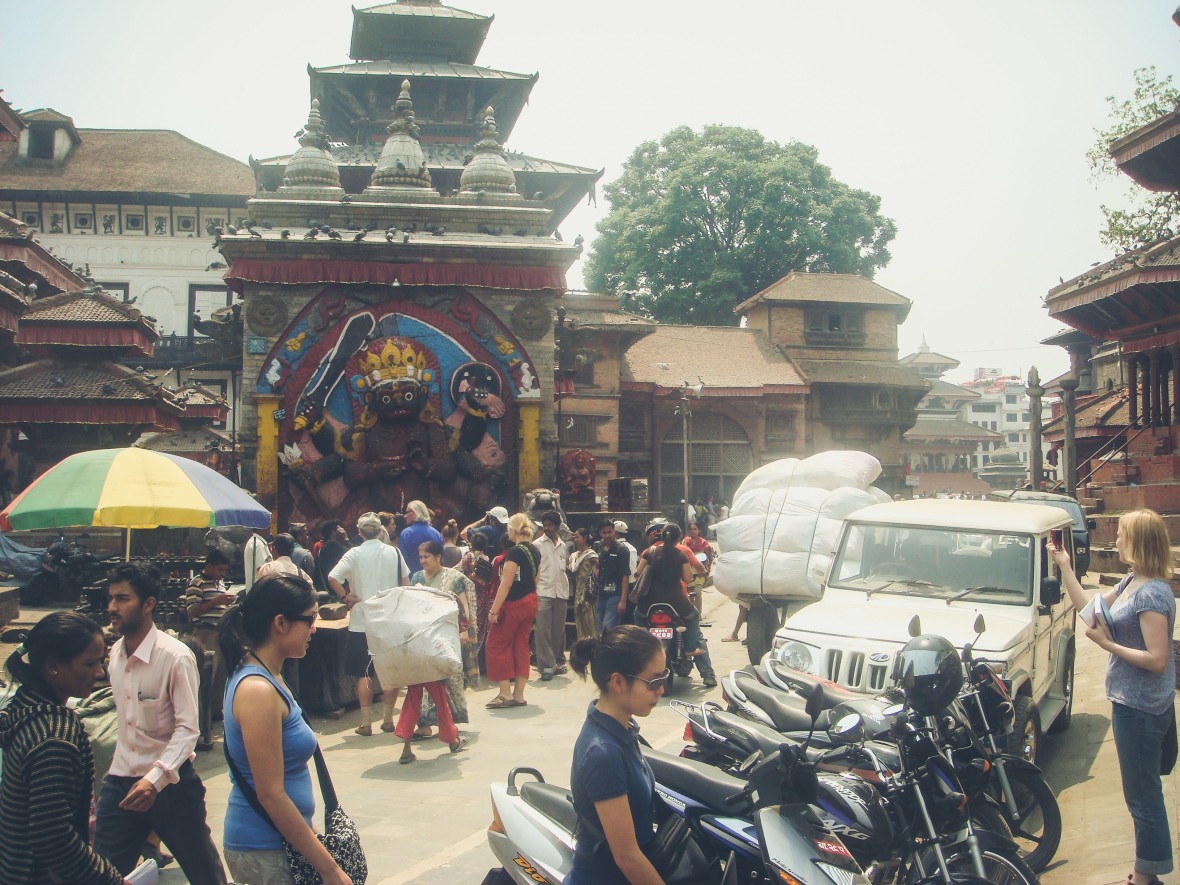 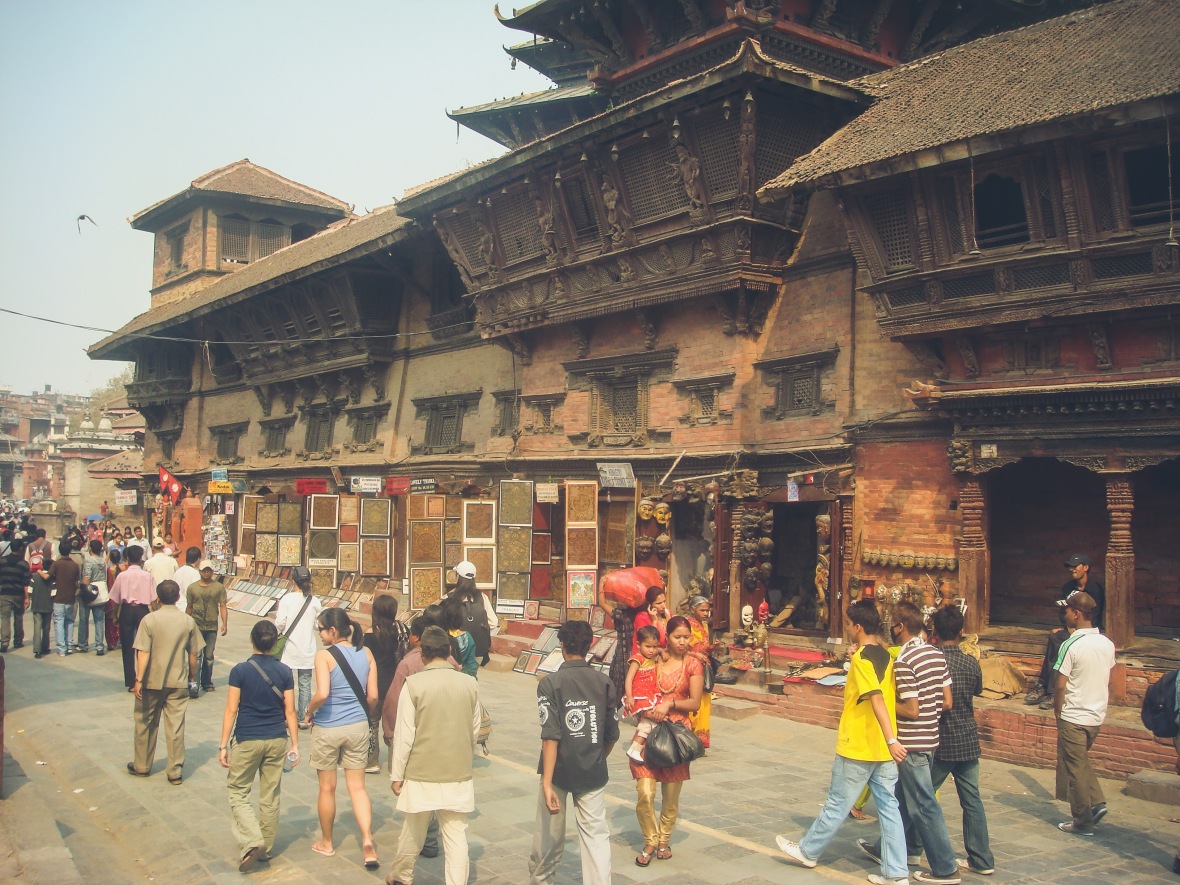 A Close Call and a New Friend

Subash seemed more interested in talking than anything malicious, though, and his friends didn’t have much to say for themselves. For the next hour or so, we sat and listened as he shared about his absent father who went abroad to make a living, his thoughts on religion, his personal ambitions to follow in his father’s footsteps and leave Nepal, and whatever else he felt compelled to share with three strangers from Hong Kong. When we felt quite certain that the situation was safe, or safer, we began to hint to Subash that we really needed to get going. He insisted on escorting us back to the guesthouse, but we were adamant that we could find our way back on our own. At this point, he unzipped his jacket and reached into an inside pocket, and I thought for a moment that his hand would emerge gripping the handle of a gun. I felt a bit silly, but not too silly, when he pulled out a wad of cash instead, to help us pay for a cab. Again, we declined his generous offer, and, after I exchanged email addresses with him, we were finally free to go. We slowly walked towards the exit, mustering as much nonchalance as we could, but by the time I closed the door behind me, the girls were already on the street waving a cab down, having taken off at a run as soon as they were out the door. I actually exchanged a few emails with Subash afterwards, and he did end up moving abroad – the last update I got from him, maybe two years after this trip, he was working at a fast food restaurant in Dubai. I got all that I asked for on this trip, and more – the fairy-tale forests, the terraced foothills, the awe-inspiring mountains. But, years from now, I don’t think any memory of this trip will compete with the night we shared beers in a rundown bar with a Nepalese gangster on the wrong side of the Kathmandu tracks.