The sun was out in full force the next day, scattering whatever was left of the previous day’s drizzle and mist. From our cool breakfast perch on the veranda, looking out across the valley at the gentle inclines of Ella Rock, we mapped out the details of our morning hike. The planned route would take us along the edge of the valley, through forest and woodland, around field and farmhouse, and, finally, onto the steep, grassy ridges of the lush hillside opposite us. There would be no signposts along the way, or even a defined trail, only a series of small landmarks indicating that we were on the right path. We gulped down our breakfast fruits and pastries, and, after arranging a car for the afternoon with the hotel, we were on our way. 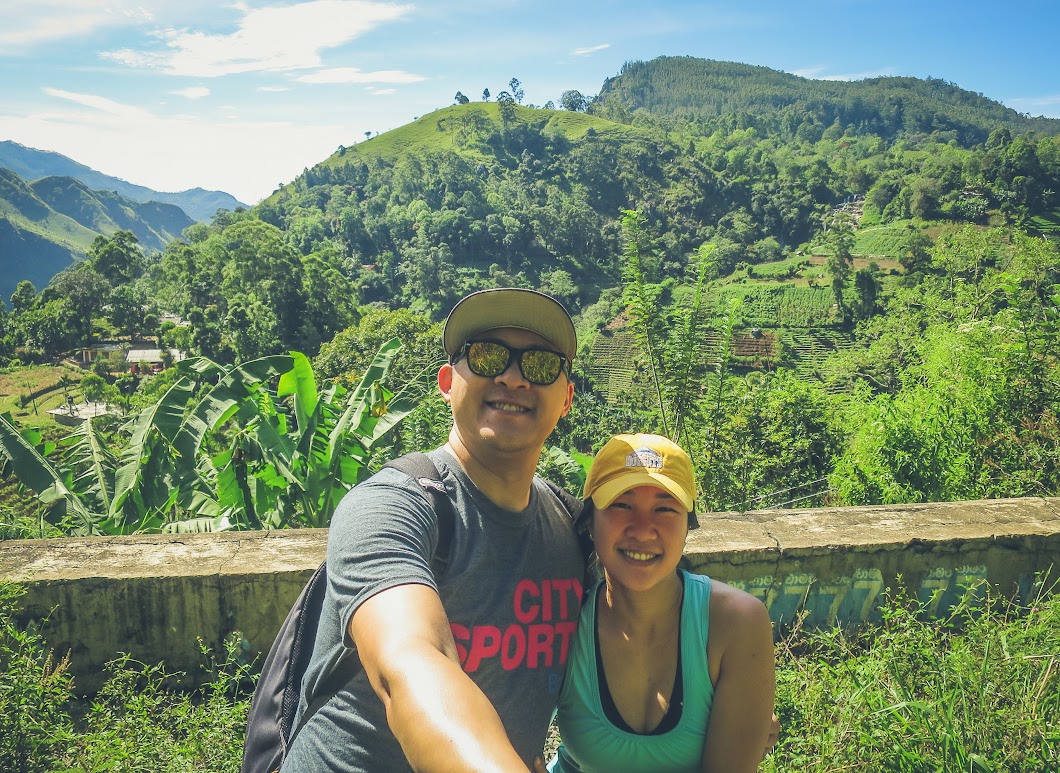 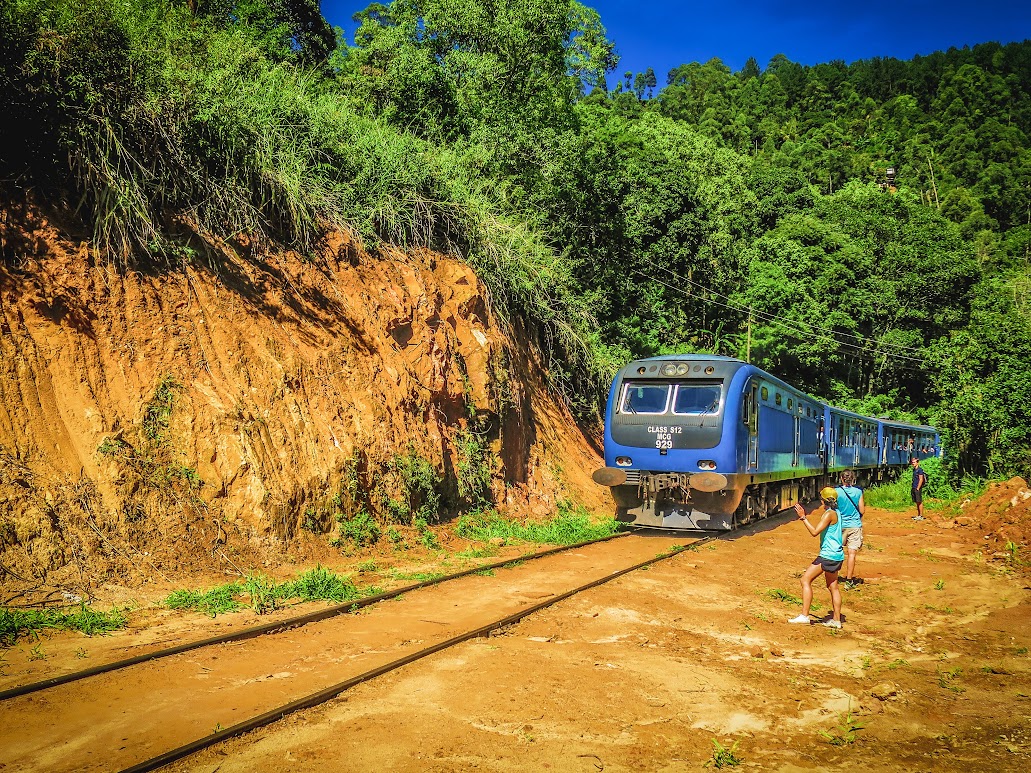 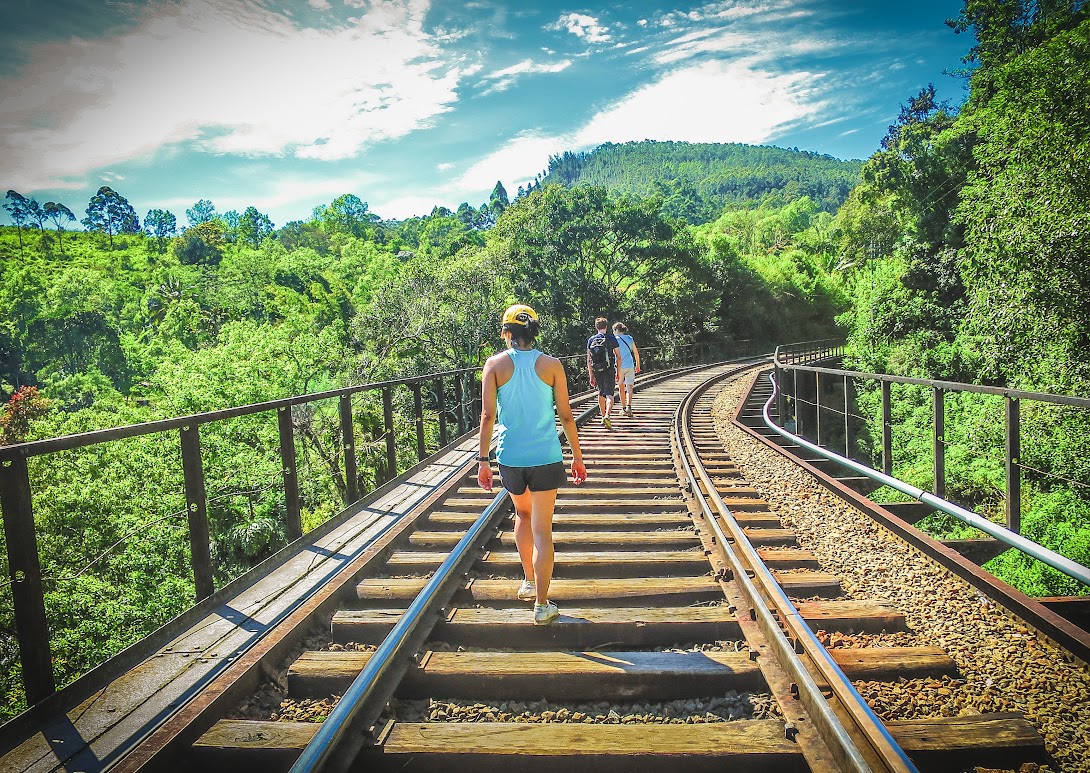 The key to to the Ella Rock hike is finding the train tracks that run through the surrounding hills. Ask anybody in town how to get to the top of the Rock, and they’ll point you towards the tracks, though you’re on your own after that. We caught up with another couple on the rails and decided to do this portion of the hike together, keeping our eyes and ears peeled for any oncoming locomotives. It was actually sort of terrifying to walk across bridges and through narrow corridors with little room for escape, dreading the distant whistle of steam and steel. In the end, we saw the train before we heard it, whipping by a section of the tracks where we had stopped to rest only minutes before. Fortunately, we were on a dusty clearing that offered a wide berth, and, from the relative safety of our patch of dirt, we waved at the passengers staring out the open windows. 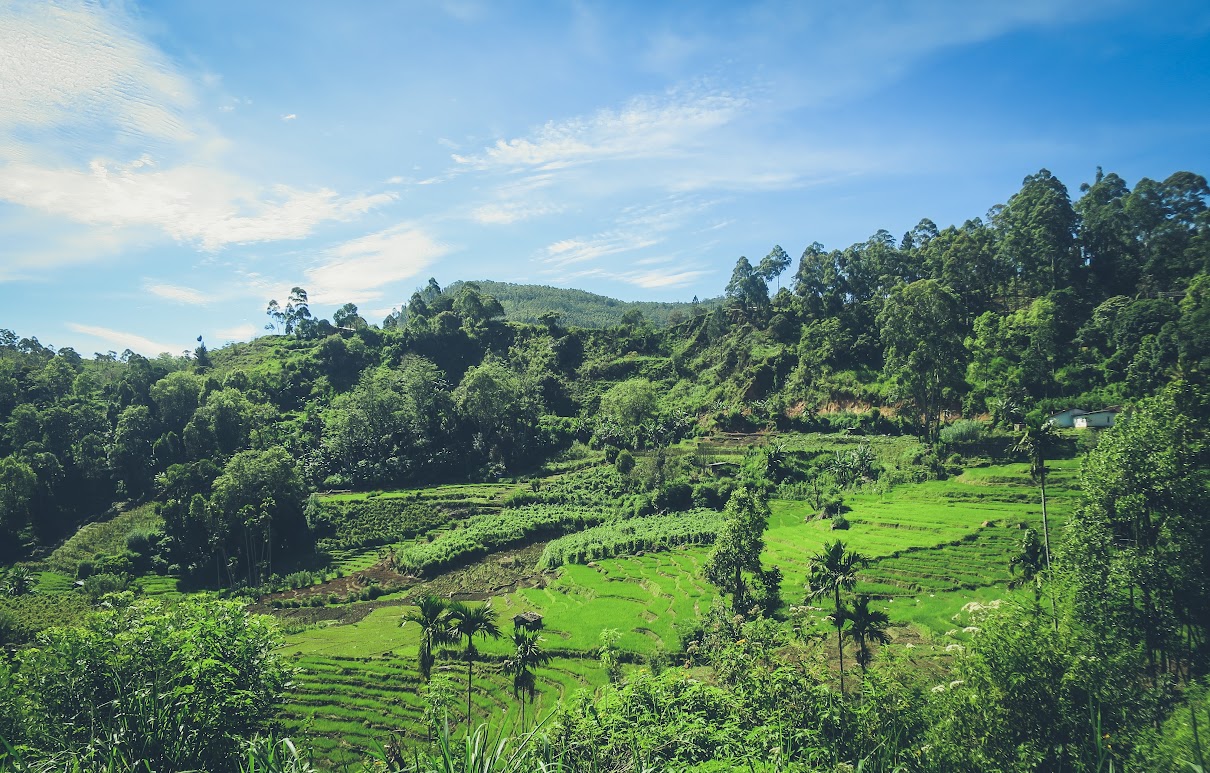 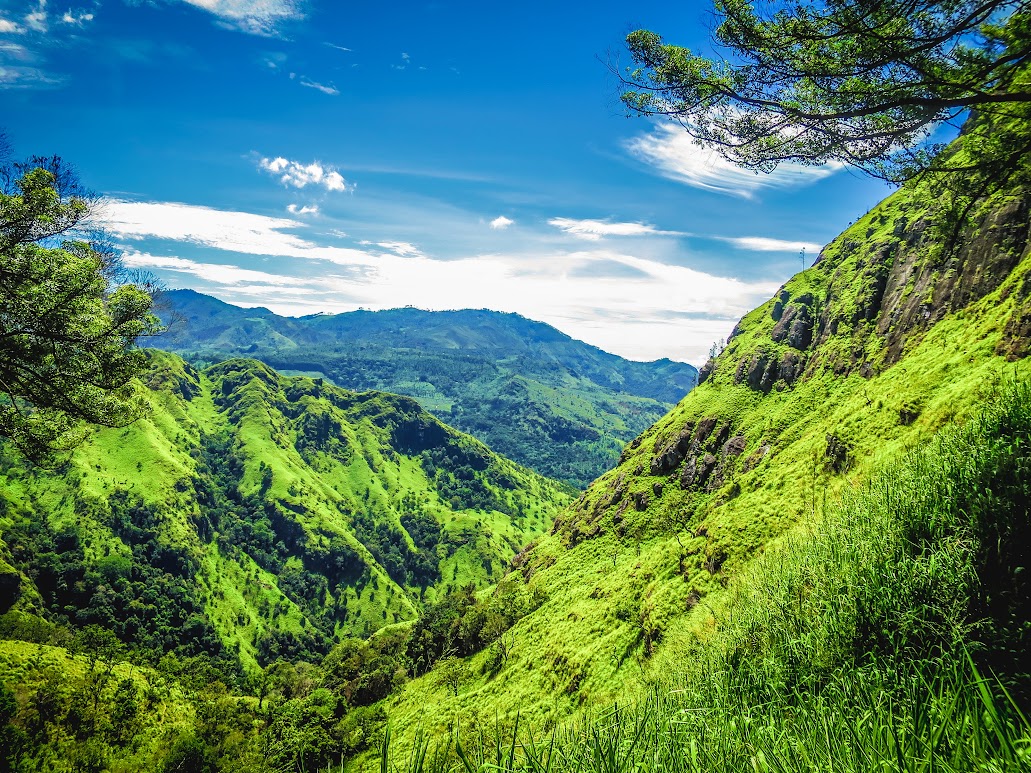 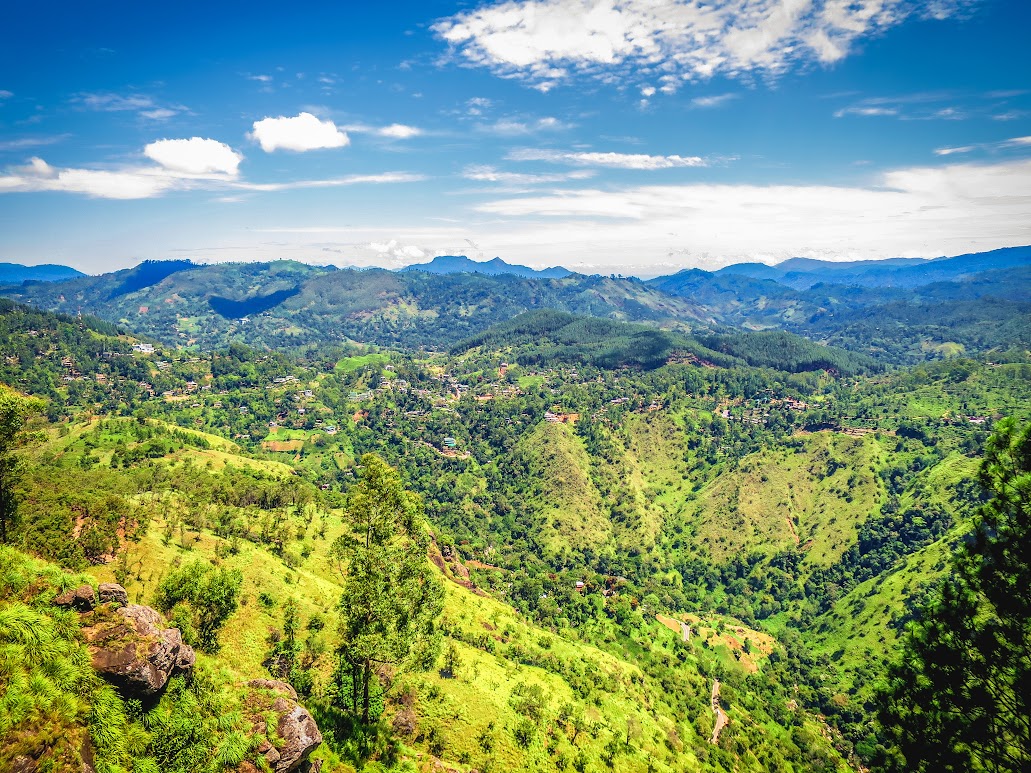 The Statue Marks the Path

We hopped onto the tracks as the train passed us by, wandering in the wake of the rumbling locomotive, until we came across a small statue off to the side of the rails. This unassuming ornament, semi-forgotten under the shade of a tree in the distant hills, marked the beginning of the second stage of the hike. Just beyond the statue, a tiny dirt path made its way down a short hill, turning sharply at a small river, and then across a bridge, before disappearing altogether into the countryside. We definitely took a wrong turn or two after the bridge, walking in circles a few times before climbing up forested ridges to get a better idea of where we might be. The late morning sun rippled and sizzled the highland atmosphere, leaving us a little worse for wear as the hike dragged on. Fortunately, we eventually stumbled on to a path with other groups of hikers, and we followed them along the side of the hill, looking out onto terraced valleys below. 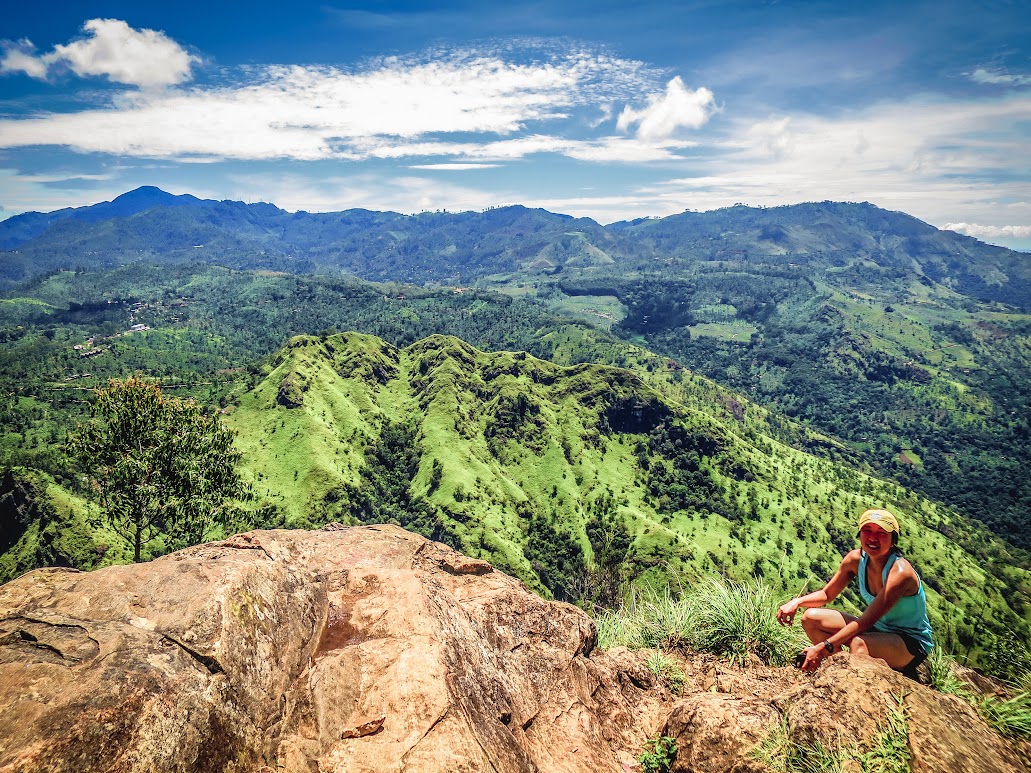 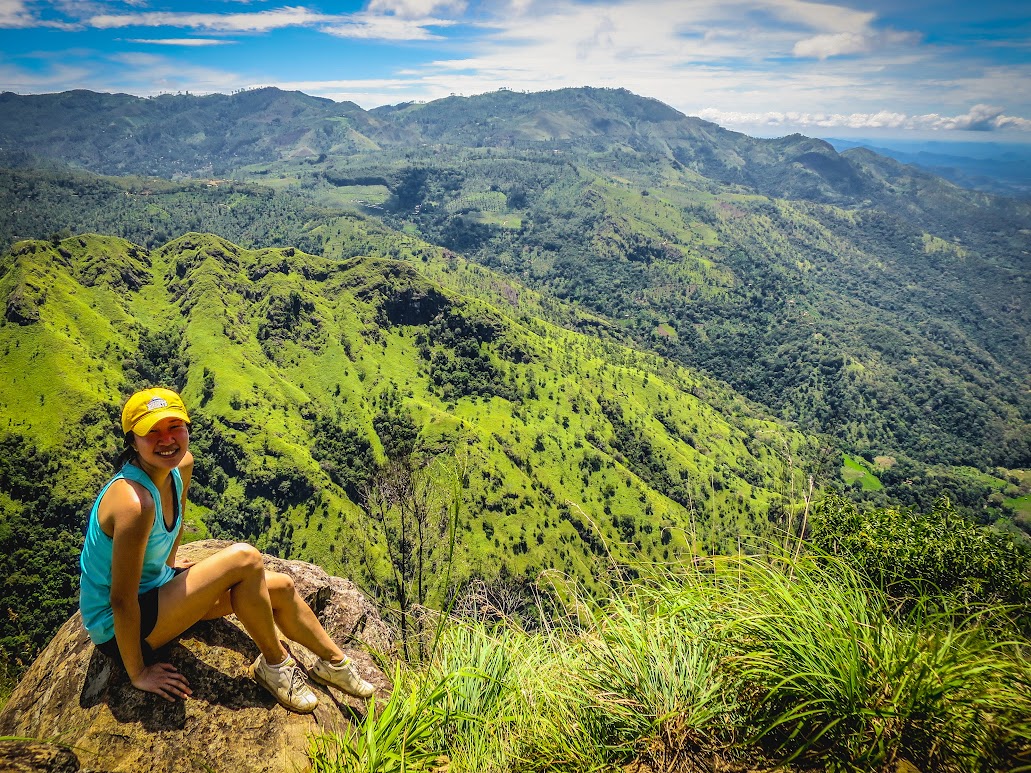 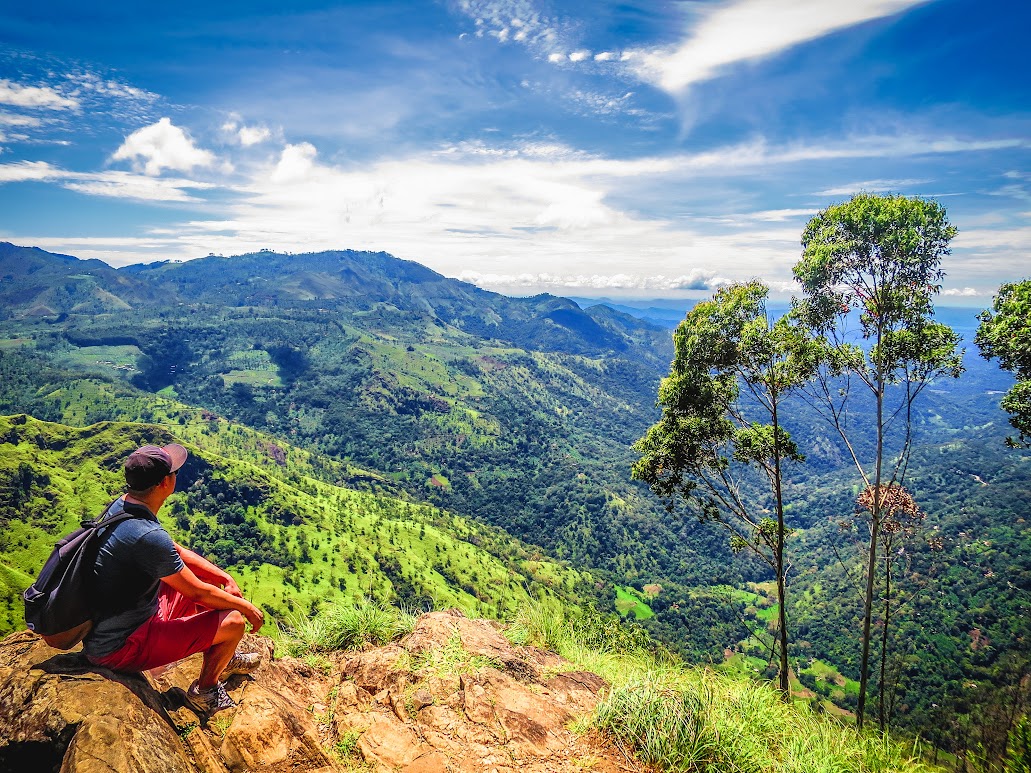 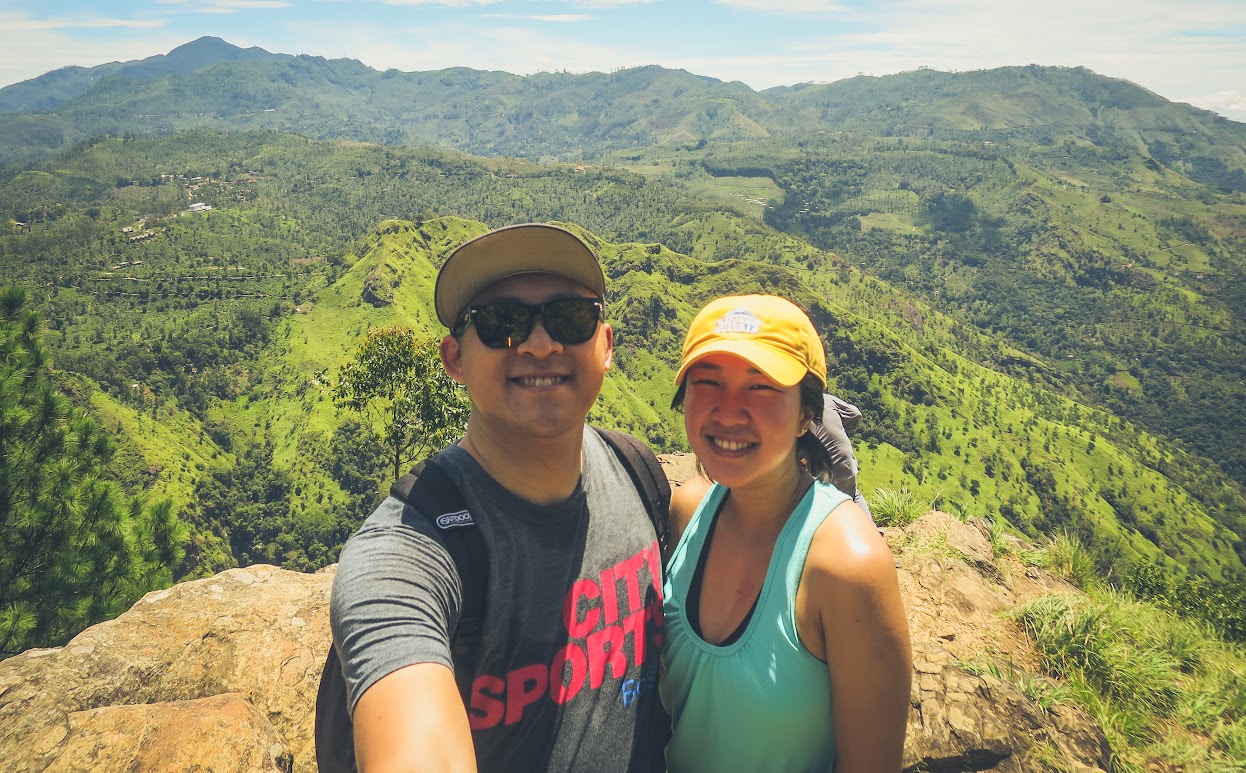 The Breadth of the Land

The last section of the climb was the toughest. It was the final push to the top, an uphill slog made worse by the unrelenting sun, though it probably only lasted about 30 minutes. Once at the summit of the Rock though, we quickly made our way through the tall grass, joining a small crowd at a rocky outcropping looking out over Ella and the surrounding mountains. The view was incredible, especially with the cloudless blue skies, and it felt like we were seeing the whole breadth of the land from clear across the country. 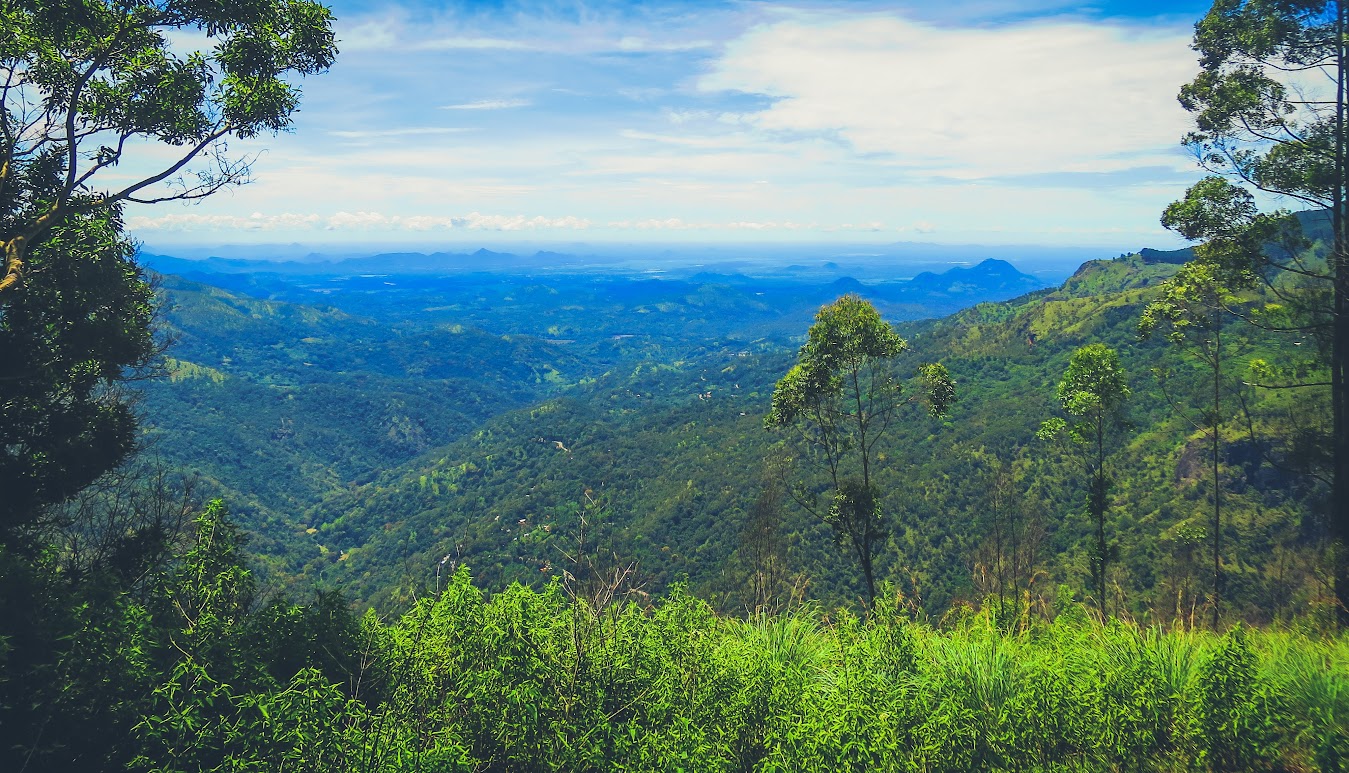 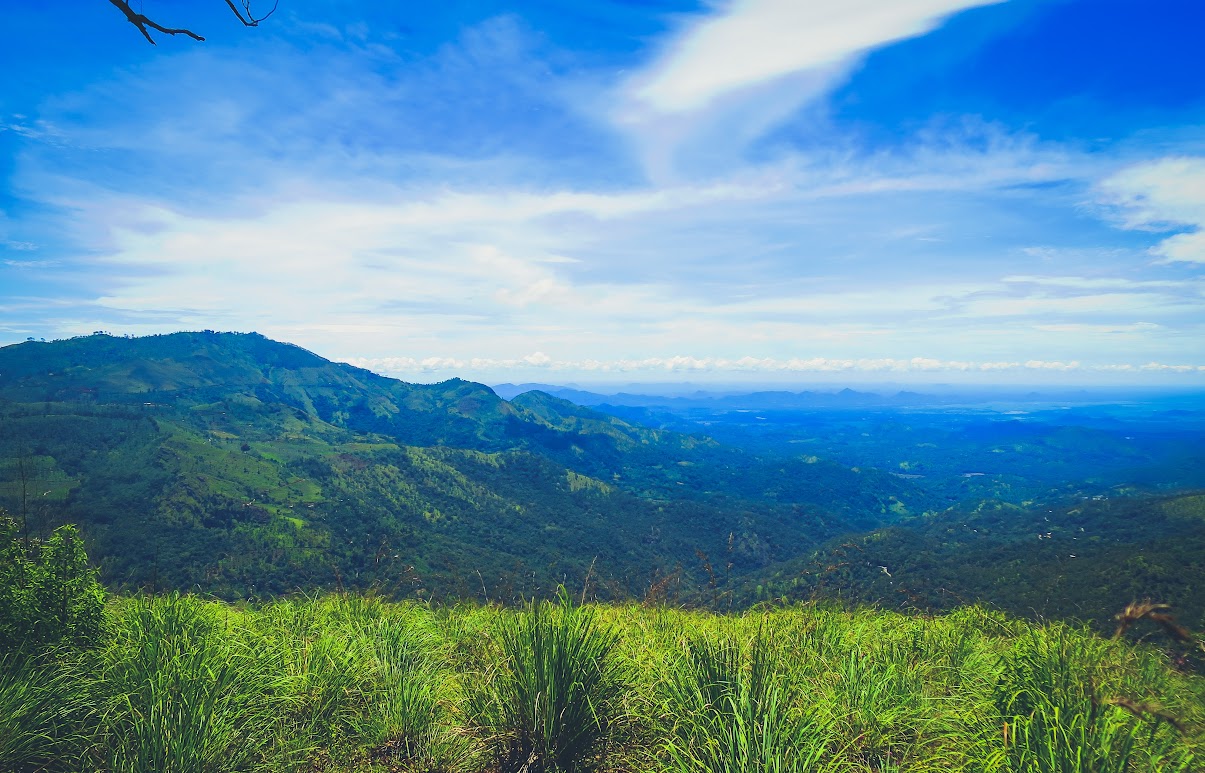 Views from the Ella Gap

As the morning crowd began to thin out, we left the line of descending hikers and wandered a little further past the rocky platform. About ten minutes beyond the cliff, we emerged through a thin forest onto a small clearing at the edge of Ella Rock, with a less obstructed view of the Ella Gap. Looking south towards the southern lowlands, we could see the rows of hills marching down into the coastal plains, the green of the land fading into the hazy blues and purples of the sea and sky, and a neat line of white clouds suspended serenely above the distant horizon. 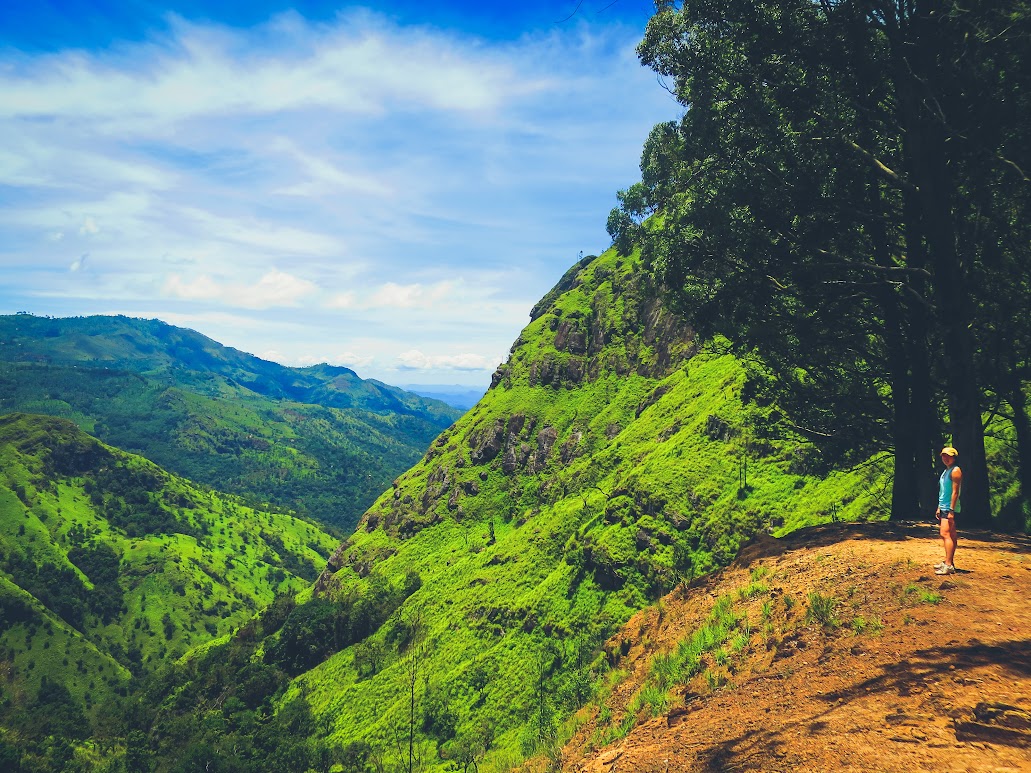 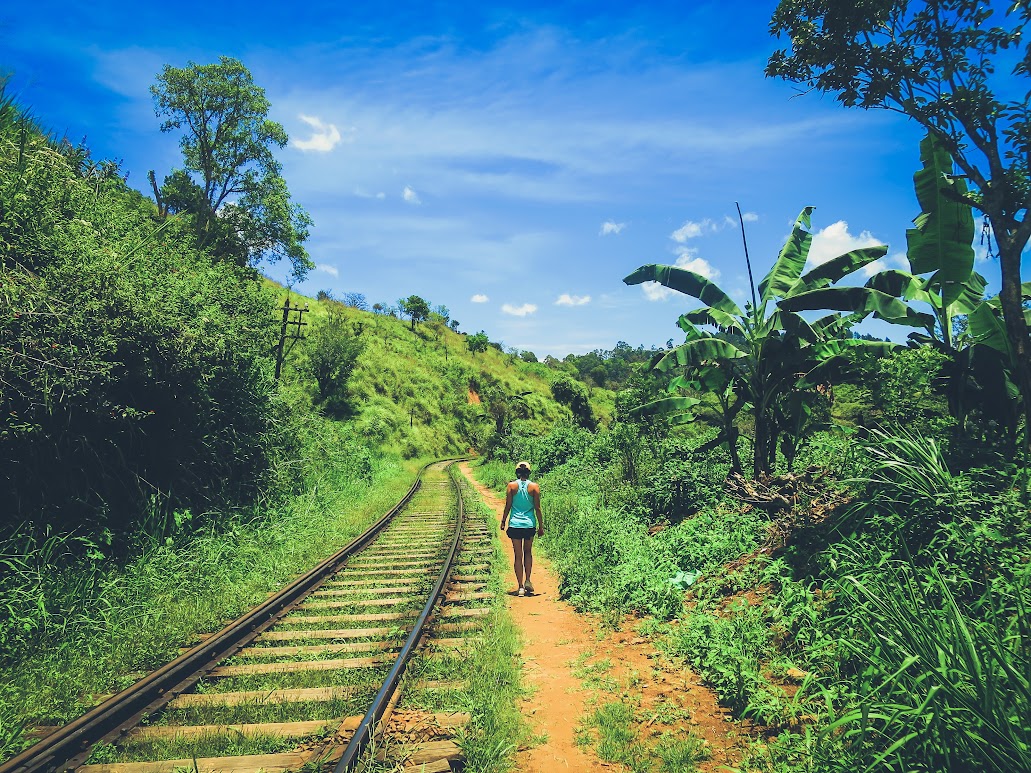 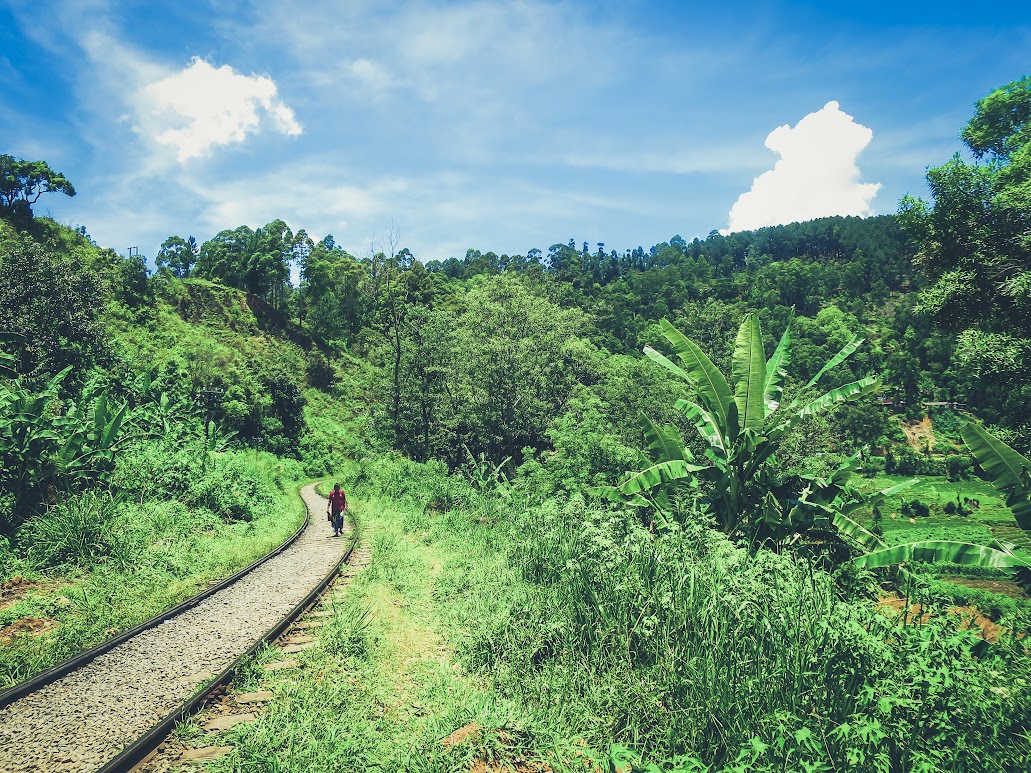 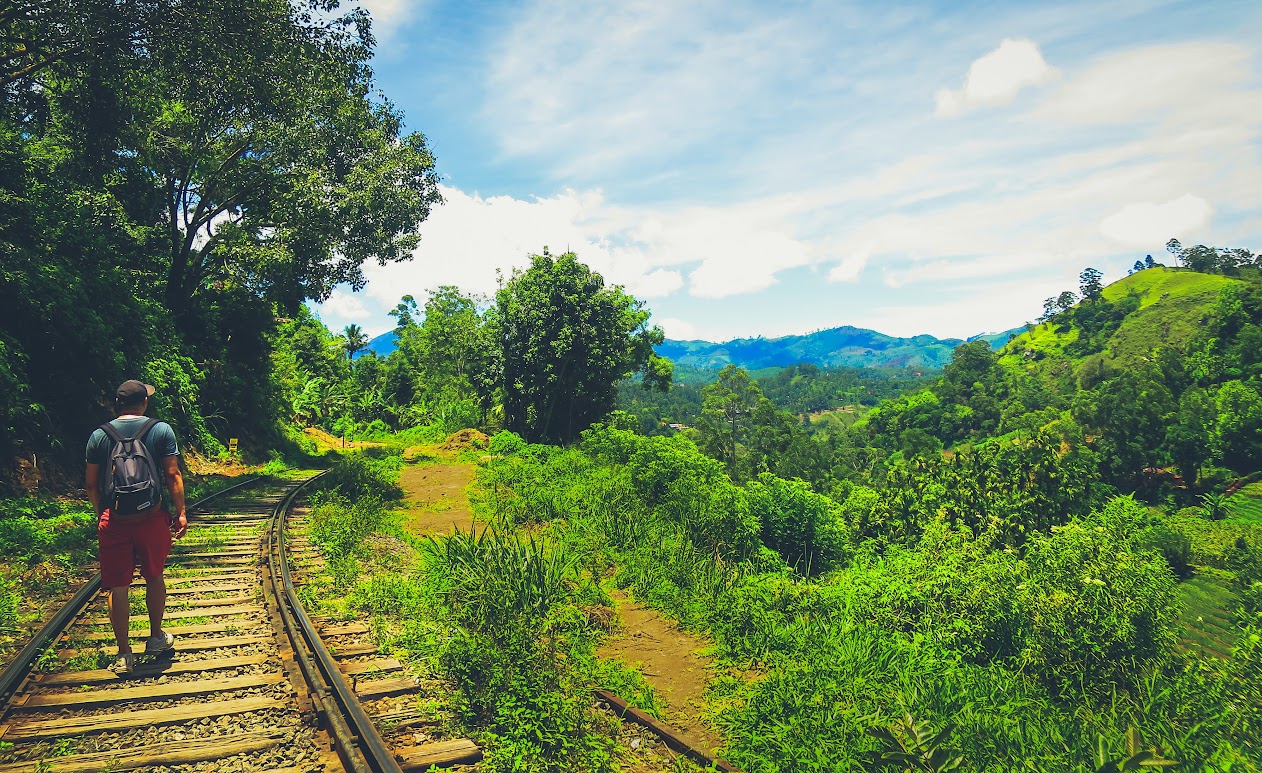 It was past noon by the time we began our own descent, and by then only the hardiest hikers were still on the trail. Getting to the top of Ella Rock took us a little over 2 hours, and, as we had booked a driver and a car for 2:00 pm, there was a definite urgency on our way back into town. We ended up getting lost again though, searching through farmers’ fields and gardens and walking down dead-end dirt paths in a desperate attempt find our way back to the train tracks. After doubling back a few times, we stumbled upon the river from earlier that morning, crossing a different bridge upriver and climbing up a small hill to finally step foot on the train tracks again. From there, it was a relatively straightforward path back to Ella, though we had to scramble off the tracks to get out of the way of another train. It was with great relief that we climbed the now-familiar stone steps up to our little hotel, and after eating a quick lunch, we grabbed our bags and hopped into the little, air-conditioned car waiting for us outside. Our time in Ella and the Sri Lankan highlands had come to an end, and we settled into the long drive towards the Indian Ocean coast and the beautiful beaches of Tangalle. 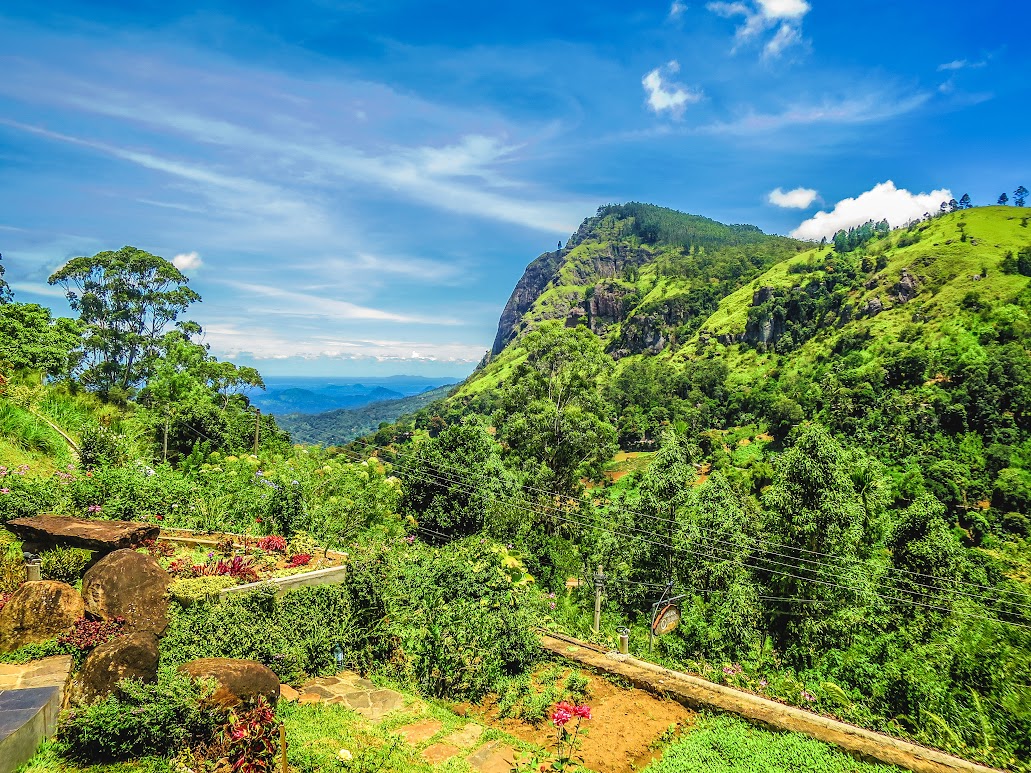