Boracay is an island on the knife’s edge, it seems. Its miles of white sand beaches and vibrant nightlife make the tiny isle in the Western Visayas a yearly contender for best island in the world. Conde Nast Traveler readers placed it at the top of their list in 2016 and third on their Top 10 Destinations to Watch in 2016,  while Travel and Leisure had it in second place, behind Palawan, also in the Philippines. On the other hand, the busy strip along Boracay’s famous white sand beach hides local living and working conditions that are a far cry from the glossy beach holiday postcard, and there’s little to no opportunity to meaningfully engage in cross-cultural experiences. Looking at Boracay through a narrower lens, the popularity of the island has exploded in the last several years, and bustling crowds, rampant development, and increasing noise and light pollution threaten to push the celebrated holiday spot over the cliff into the depths of tourist trap purgatory. Some argue that it’s already in free-fall, but that hasn’t stopped the legions of sun and sea worshipers (1.7 million in 2016) from crowding the jetties at Caticlan, the island’s main link to the rest of the world. 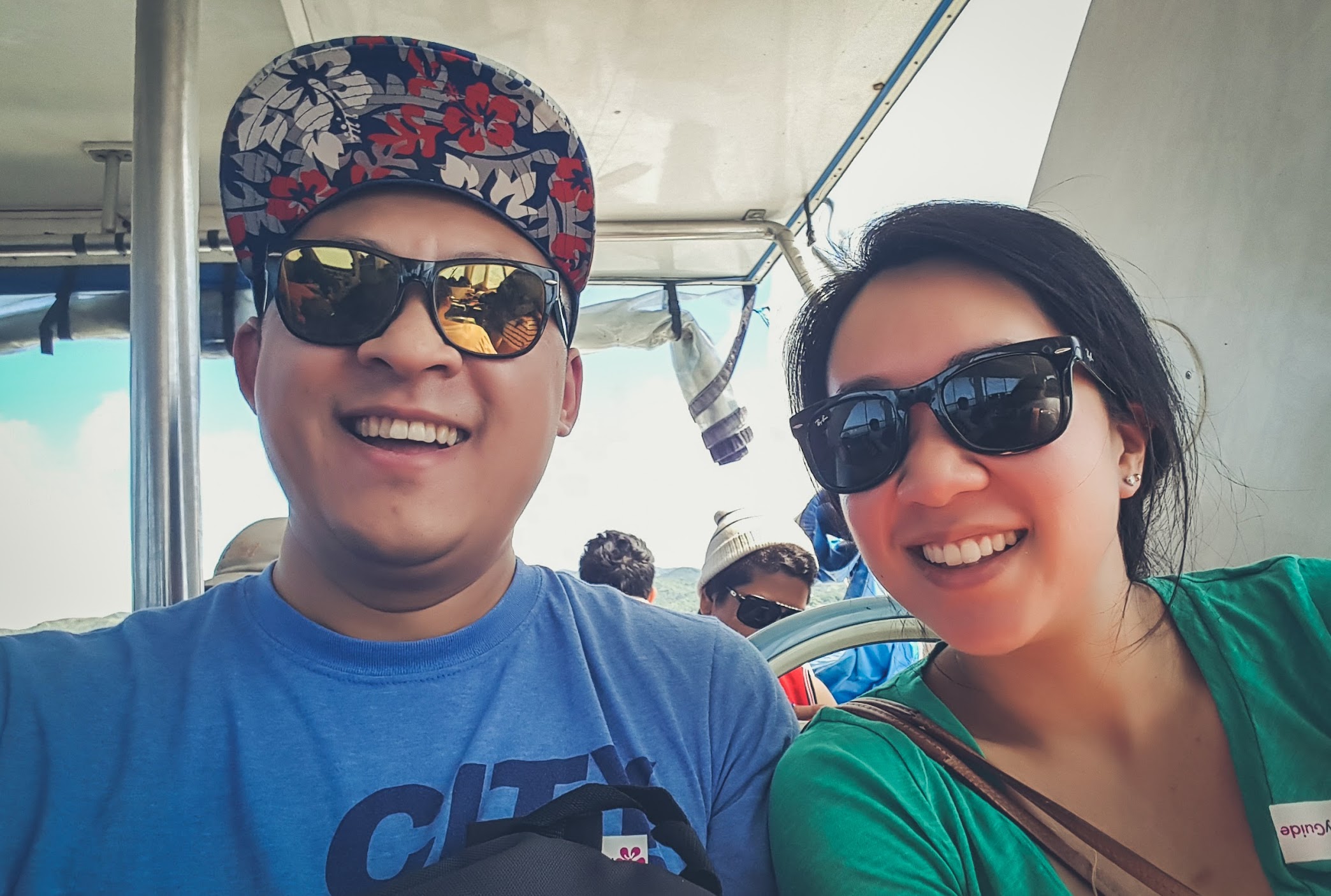 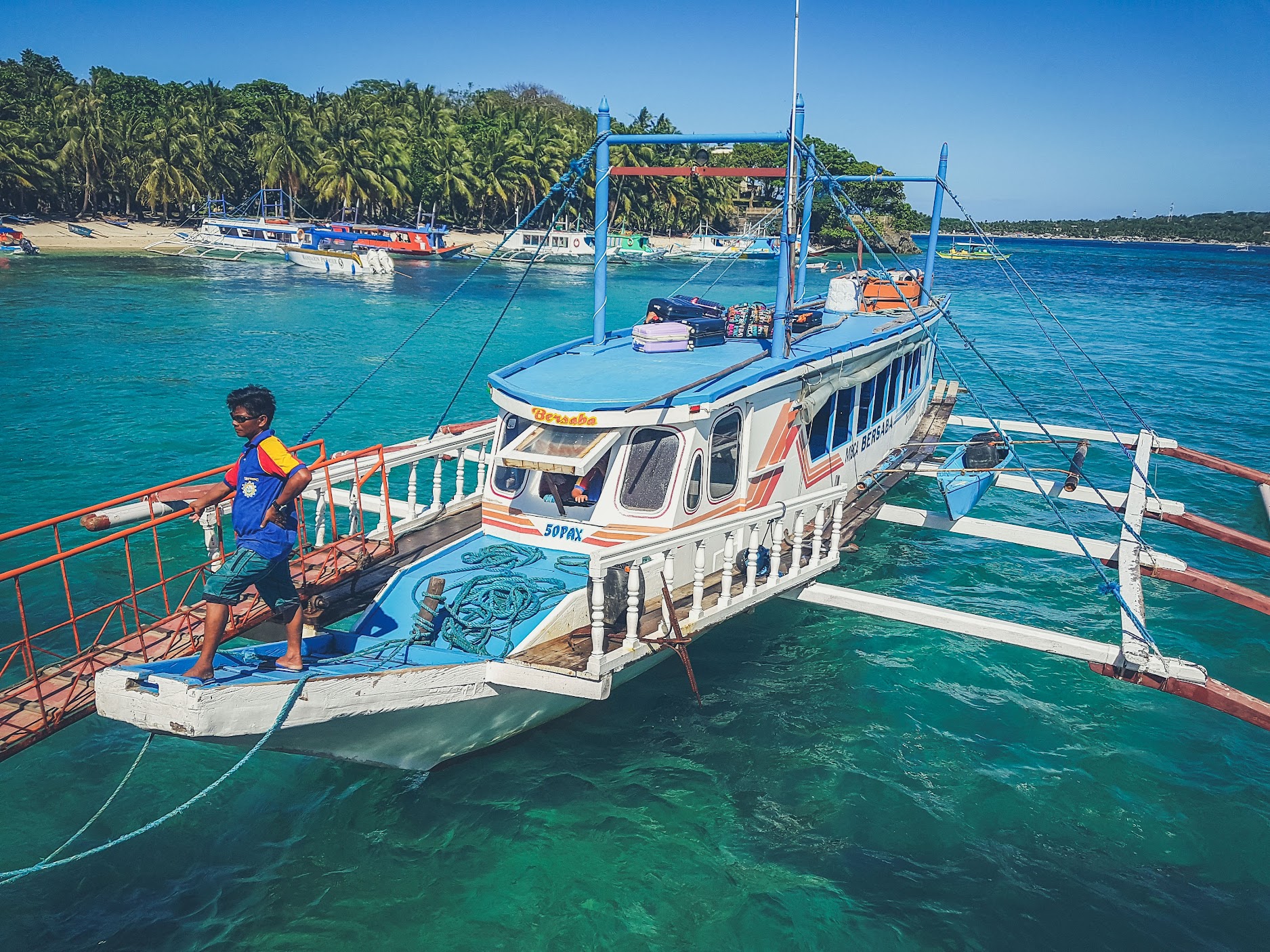 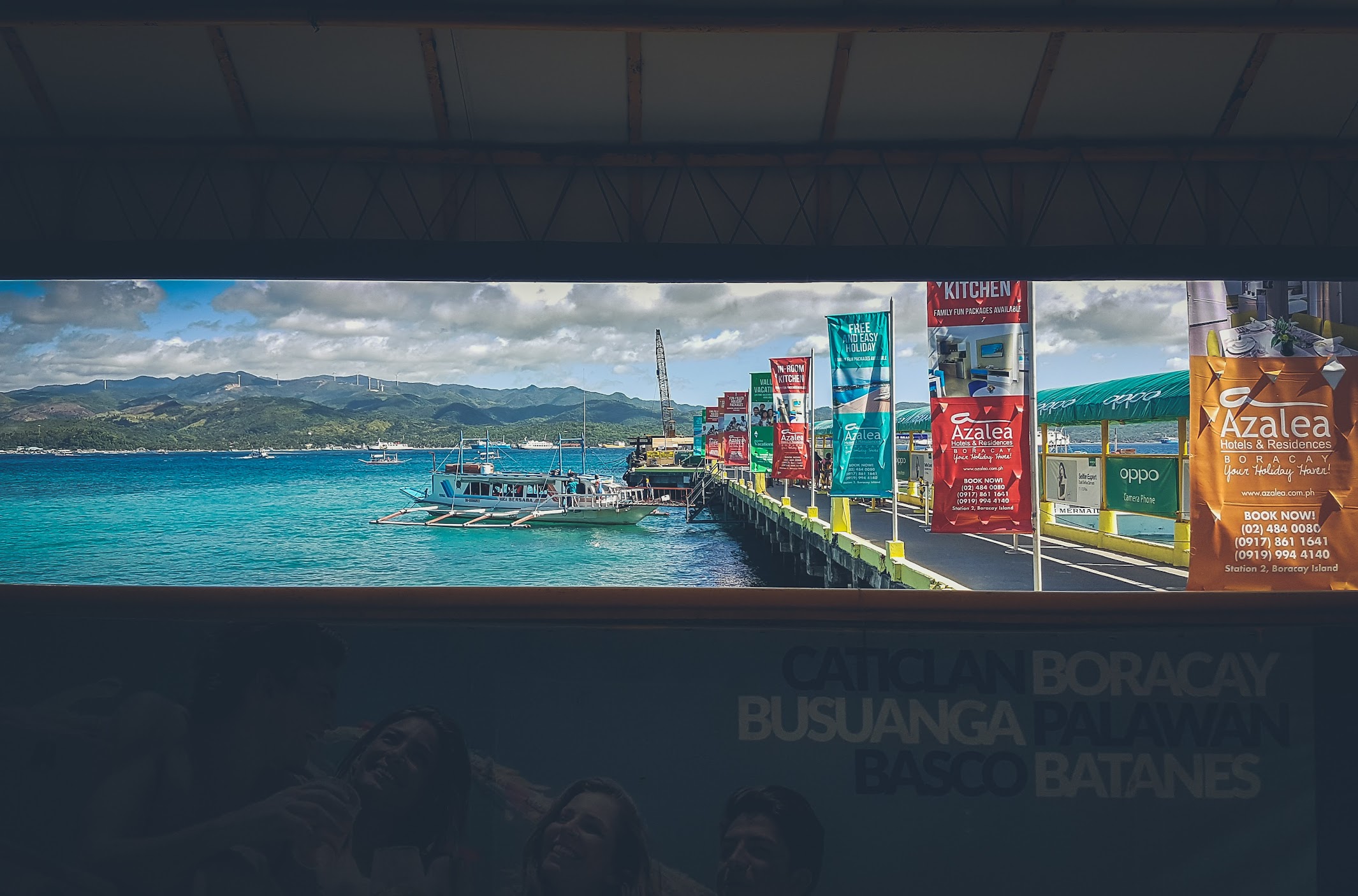 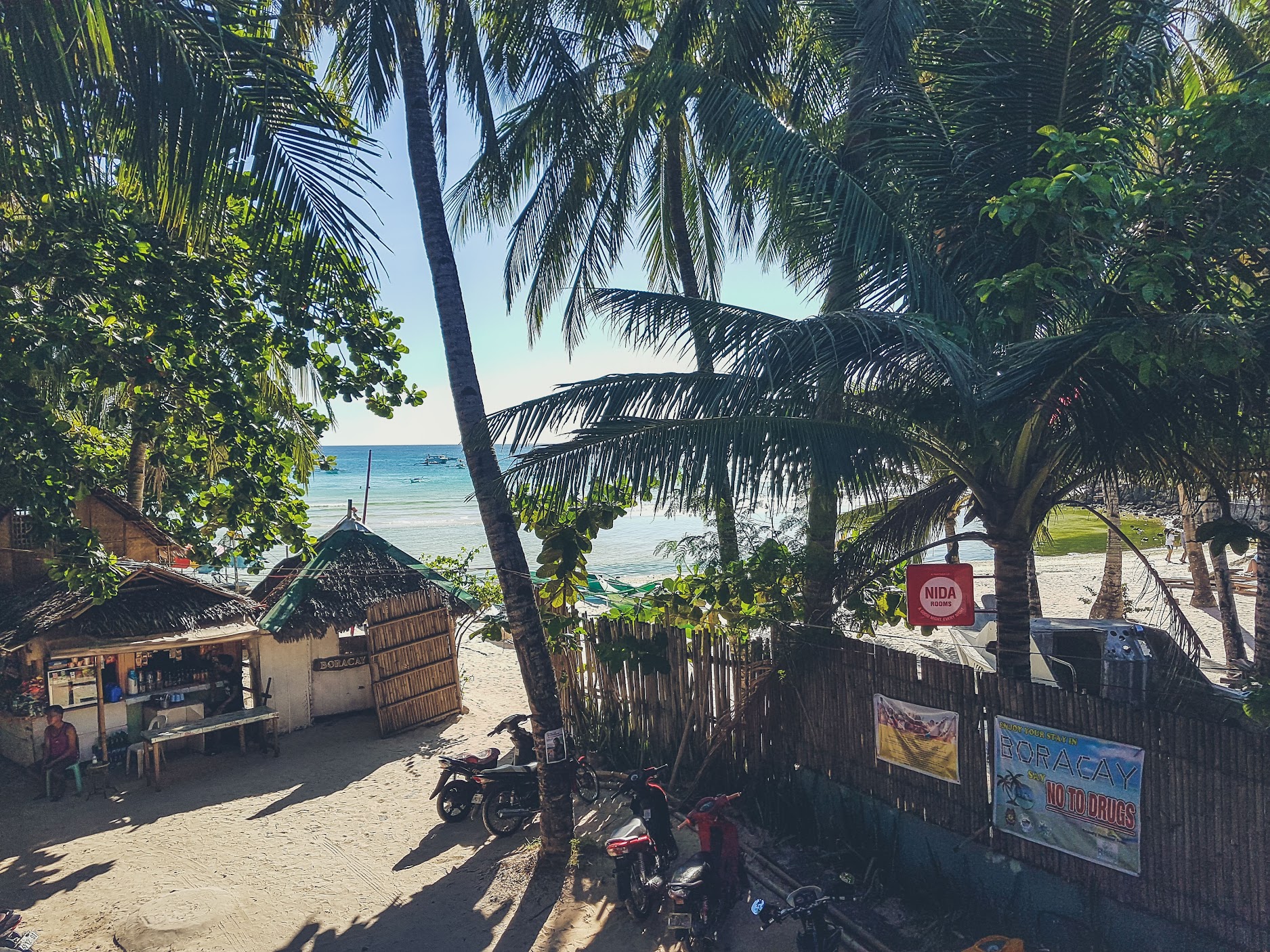 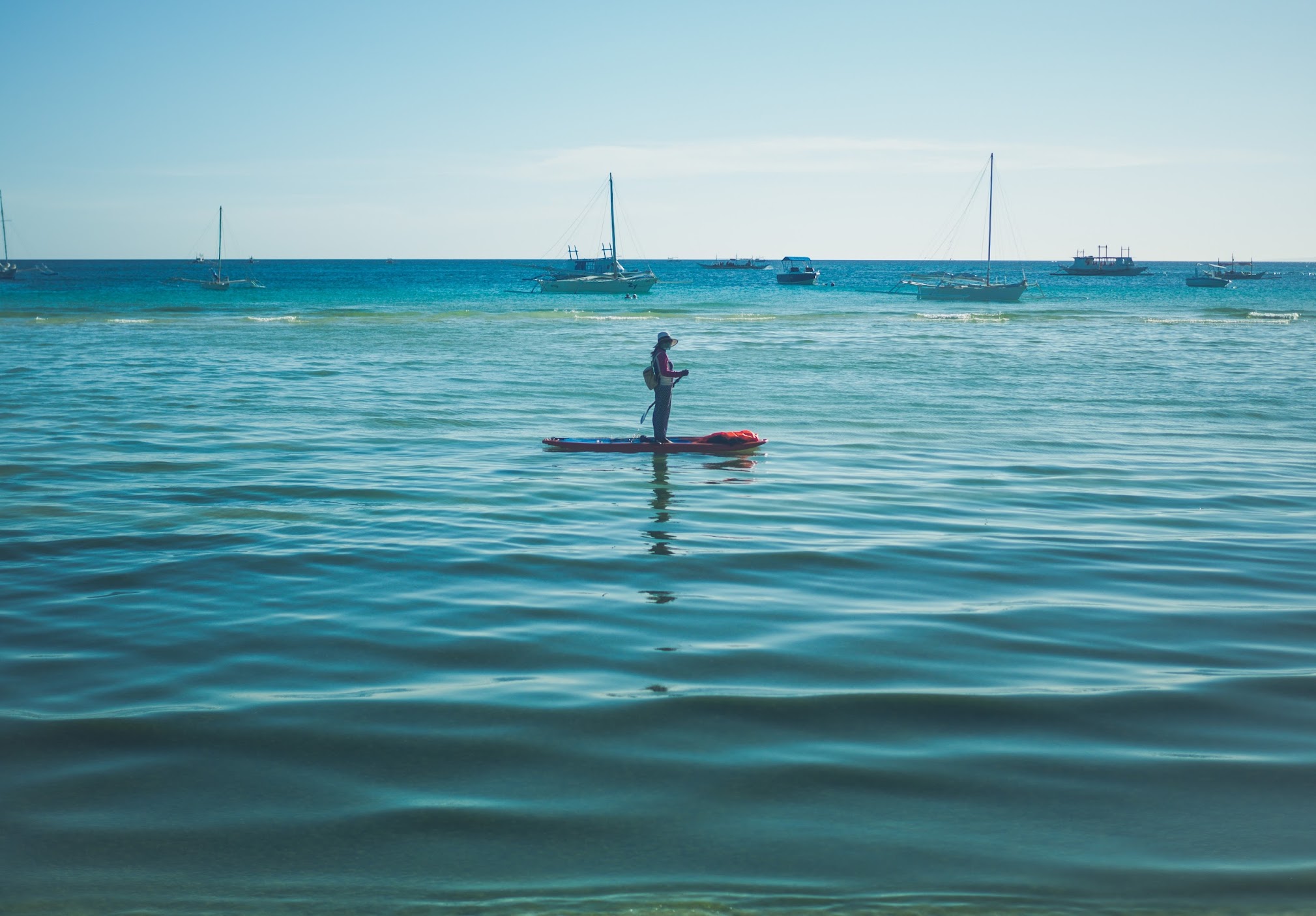 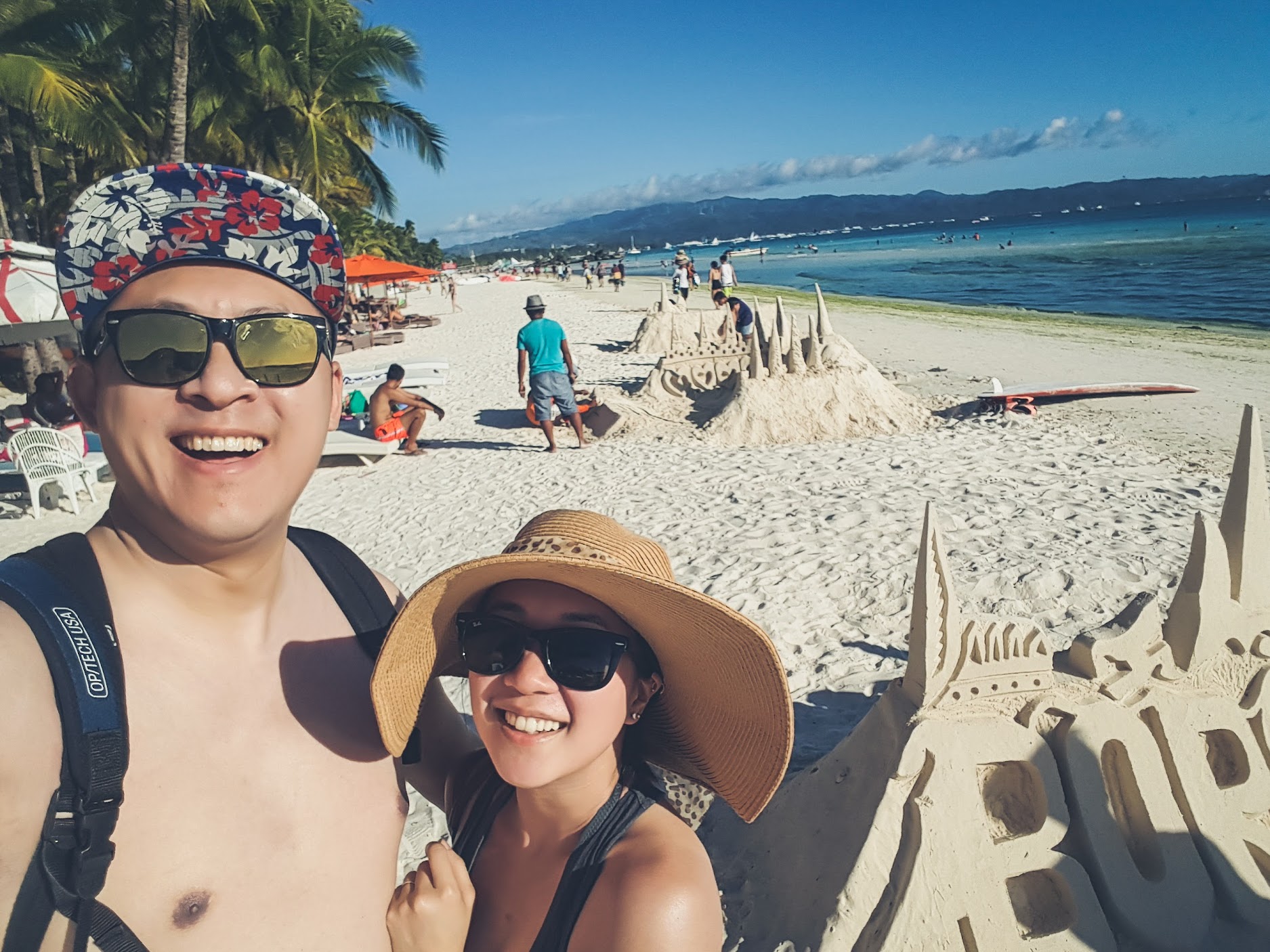 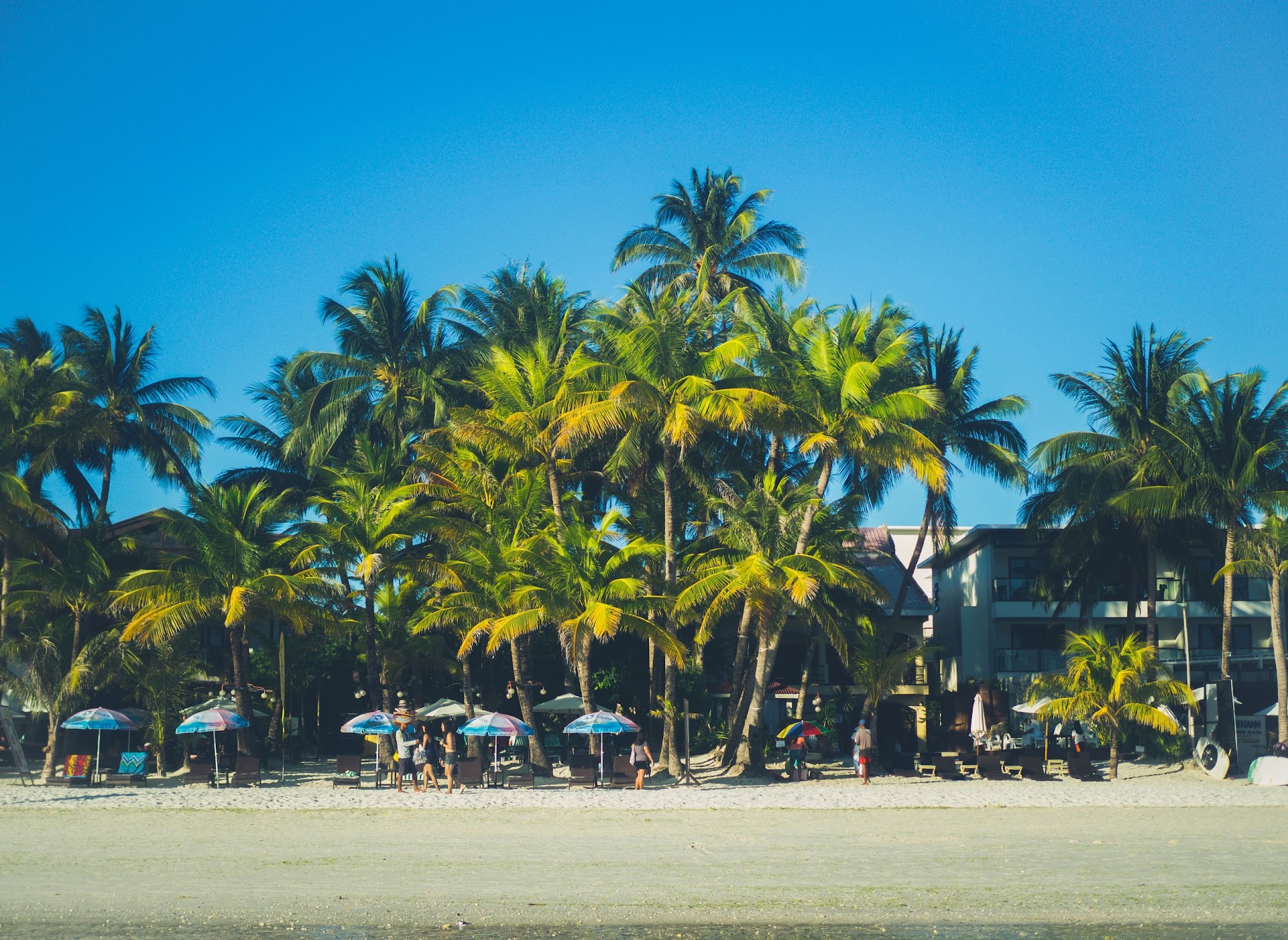 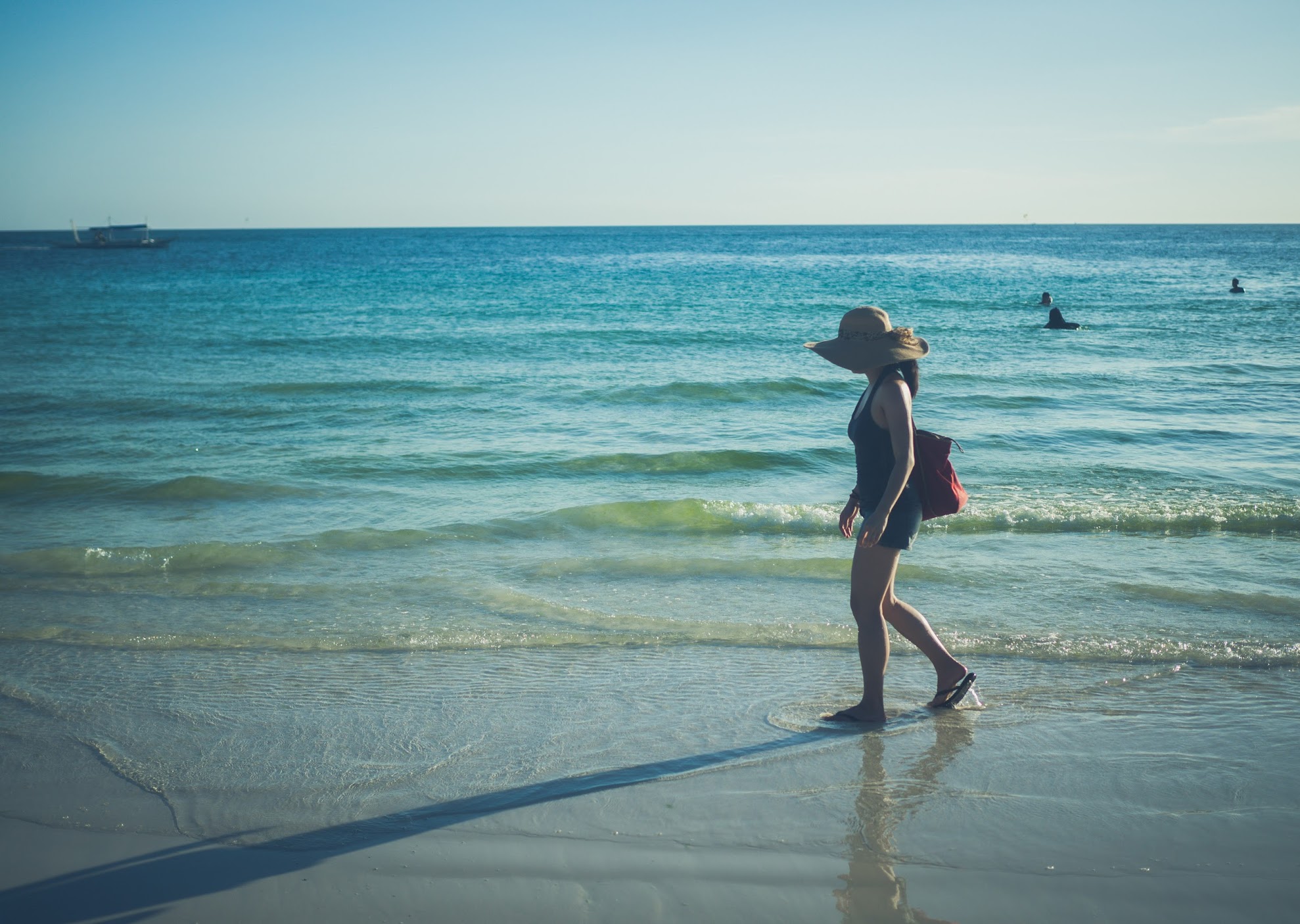 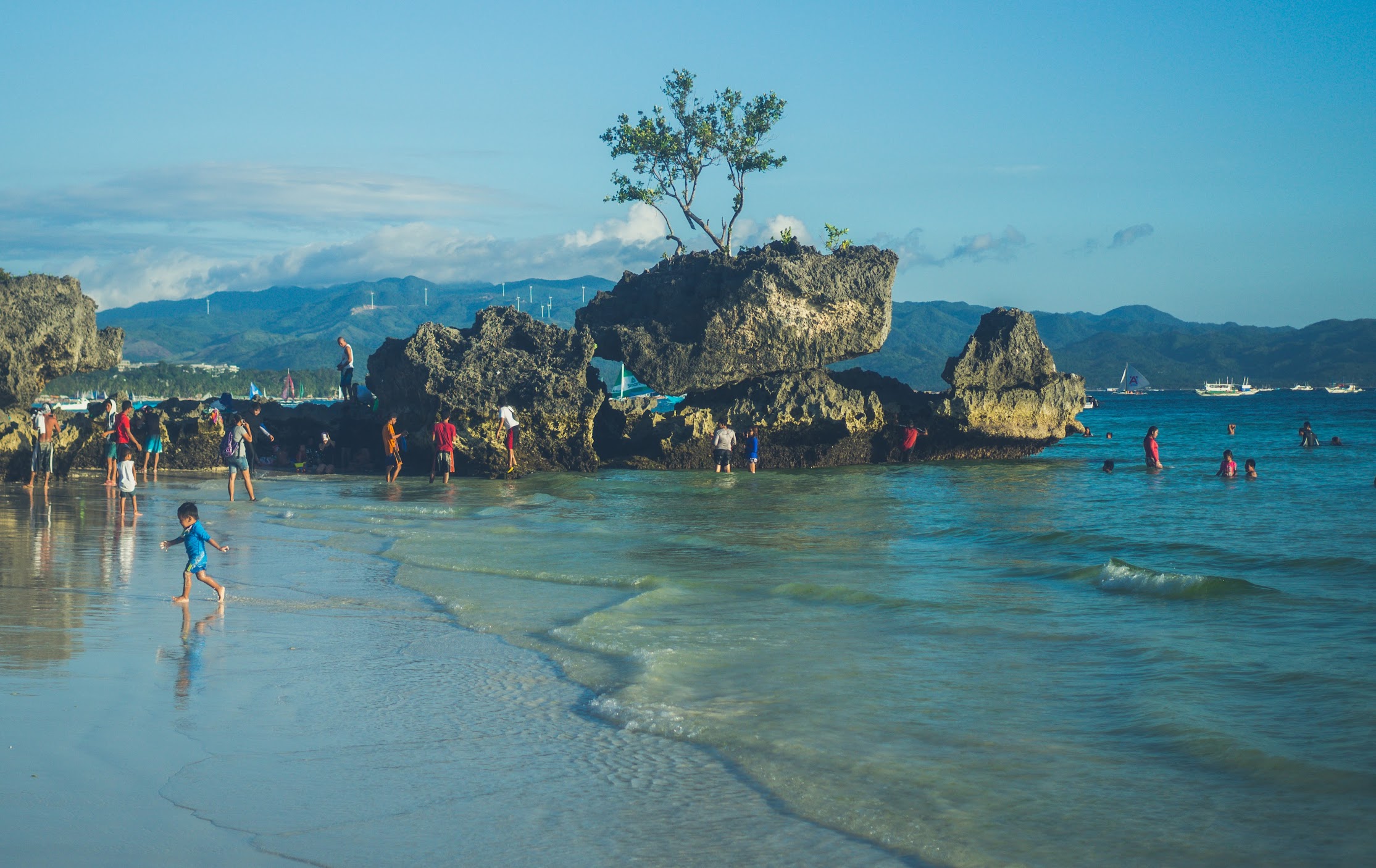 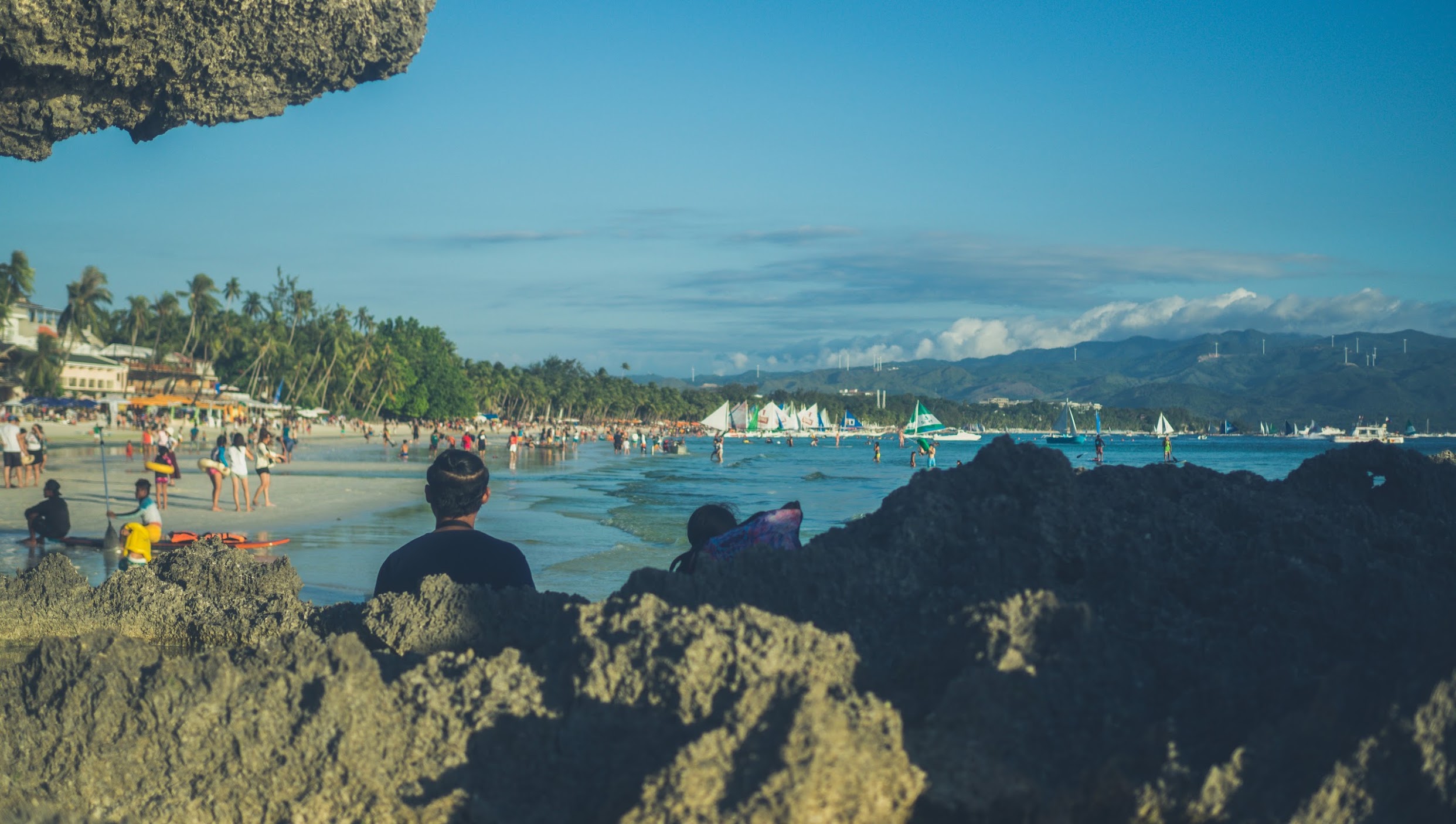 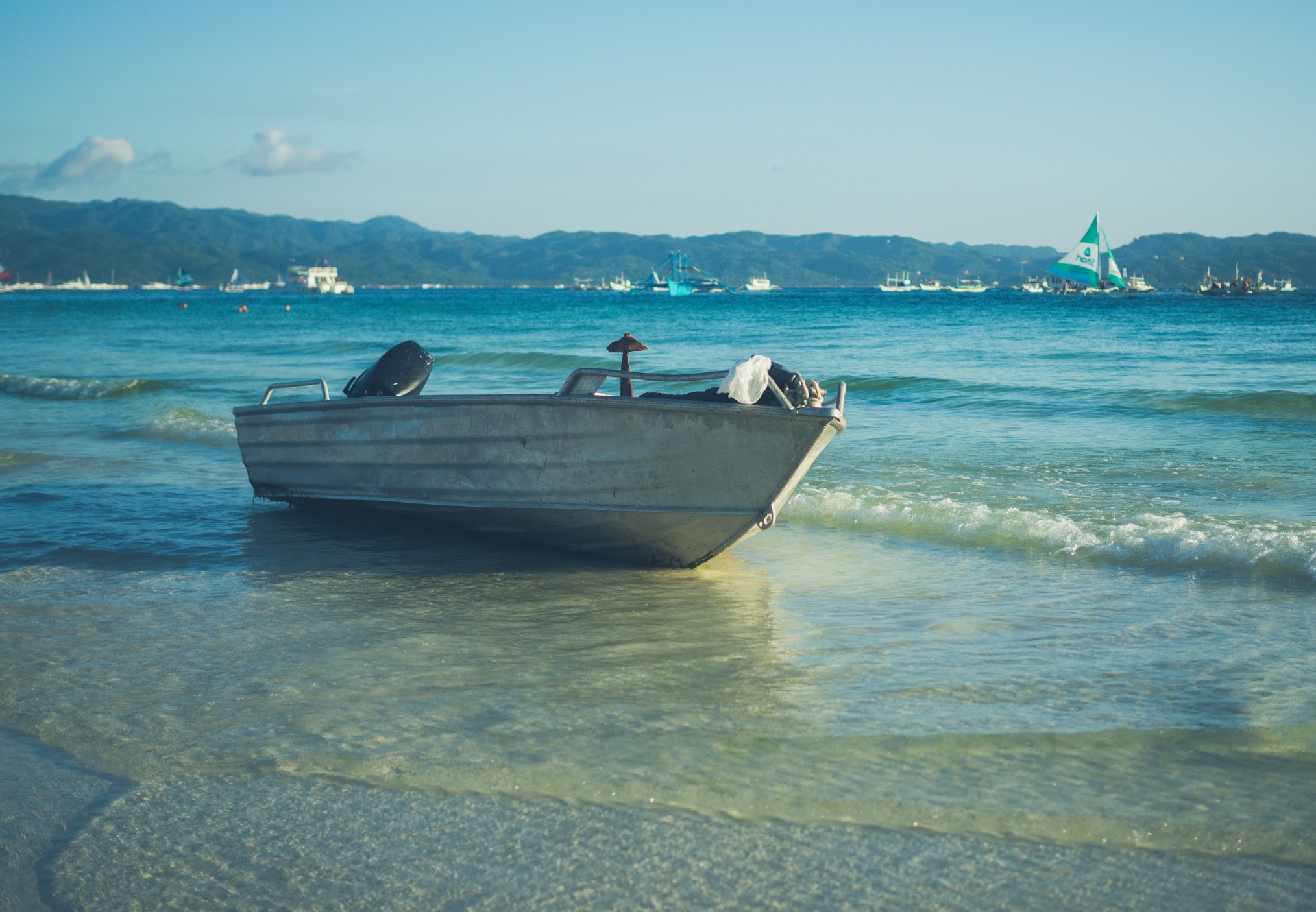 Holidaying in Boracay is almost a rite of passage in Asia. There’s a vaguely defined checklist out there in the ether, the continent’s own highlight reel of sights and experiences: snowboarding in Niseko, trekking in Nepal, surfing in Bali, diving in Malaysia, night markets in Taipei and Singapore, hiking across Tiger Leaping Gorge, a night in a Japanese ryokan, the lush hill country of Sri Lanka, the limestone islands of Halong Bay, the thousand temples of Bagan, and – among many, many others – a beach holiday in Boracay. Its reputation precedes itself, and, though Ashley and I wouldn’t exactly consider ourselves beach people, it’s become one of those places where it just feels like we should go and check it out for ourselves.

We booked our flights on Cebu Pacific at the beginning of March, flying through Manila over the Easter holidays in mid-April. The timing wasn’t too great – I’d be in the middle of a dizzyingly busy last month of my Master’s program – but I pushed those thoughts to the the furthest corners of my mind as I clicked the confirm button on the airline website. As far as I am aware, Cebu Pacific offers both direct and indirect flights from Hong Kong to Boracay, but the direct flights land at Kalibo Airport, which is over an hour’s drive away from the Caticlan jetties. The indirect flights through Manila land at the much closer Godofredo P. Ramos Airport, just around the corner from the ferry terminal. With the layover in Manila, the direct flight is probably still a faster way to get to Boracay, even with the hour-plus drive, but I consider it a fair trade-off to not have to sit in a van for an hour, and, more importantly, there’s a Krispy Kreme and a Jamba Juice in Manila’s Terminal 3.

Our accommodations were at the Punta Rosa Boutique Hotel, at the northern tip of Station 1. Boracay’s main beach is divided into three sections, Stations 1 – 3, from north to south. Station 2 is where all of the action is – restaurants, clubs, massage parlours, shops and storefronts, etc. – so those of us who absolutely need a good night’s sleep stay in the other two stations. The more high-end accommodations are found in Station 1, but the prices at Punta Rosa were comparable with the mid-range hotels in Station 2, with the added benefit of quieter evenings. The hotel also helped us arrange transport from the airport to the hotel – a van from Godofredo to the jetty, tickets and other transport fees from the jetty to Boracay, and a shuttle from the pier to our hotel – which saved us a bit of a headache.

After checking in – and slathering on layers upon layers of sunscreen – we ventured out onto the famous white sand beach for the first time. Low tide had exposed a strip of sand connecting our part of the beach with the rest of Station 1, and we stepped around coconut palms and wooden pilings driven into the bare ocean floor. The crowds grew as we approached the battleship silhouette of Willy’s Rock, a series of old volcanic formations leading from the beach into the blue waters of the Sulu Sea. At just the right hour, the sun began to descend towards the horizon, and the bikini’d and burned masses turned towards the fading light, pointing our phones and cameras in a vain effort to freeze time and be in sunset forever. When the last ray of light disappeared over the edge of the world, we broke from our reverie, and evening picked up where day left off. Ashley and I grabbed dinner at Mesa in Station 2, a restaurant specializing in Filipino cuisine, grabbing a table by the beach to watch the lingering hues play out across the darkening sky. 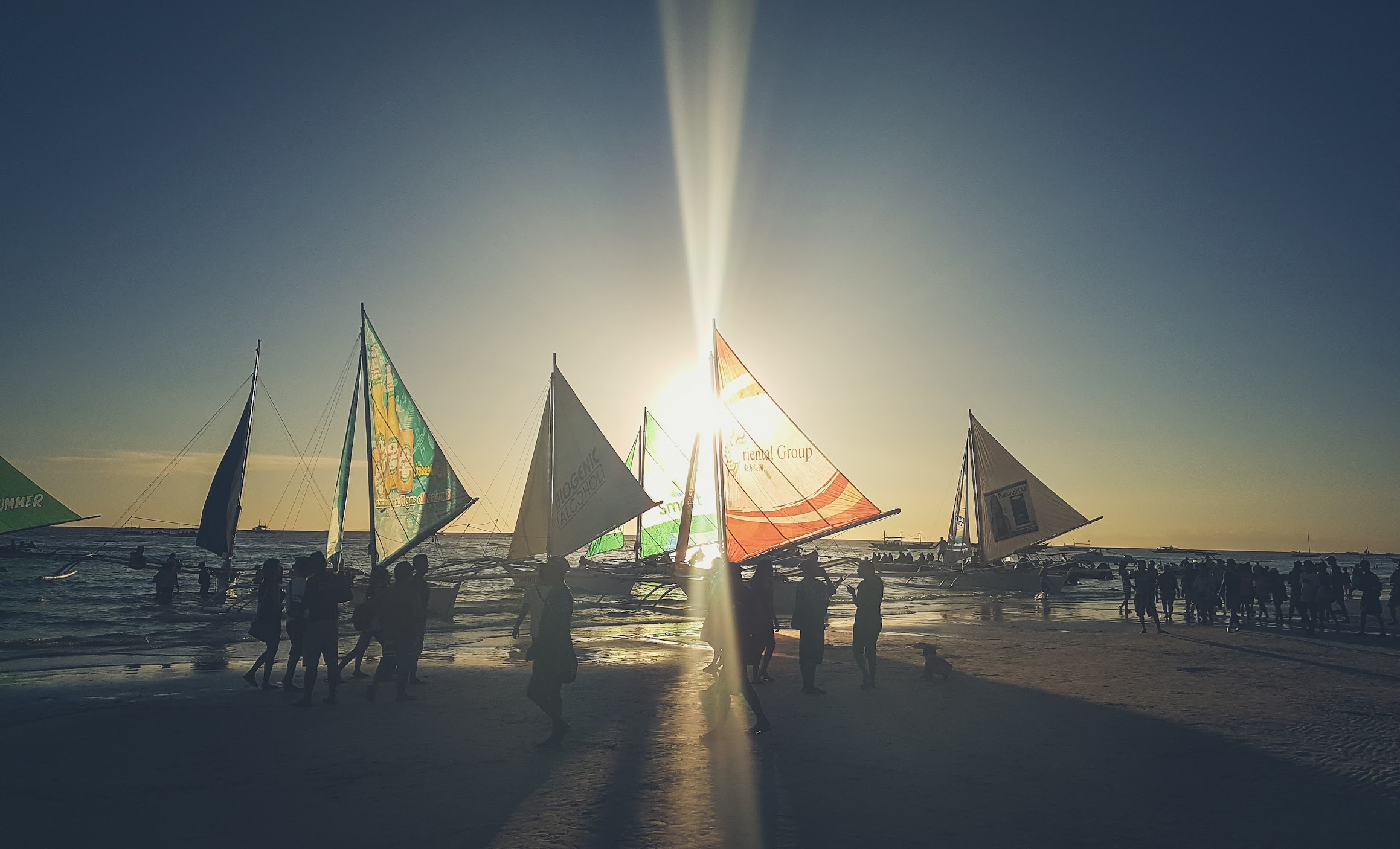 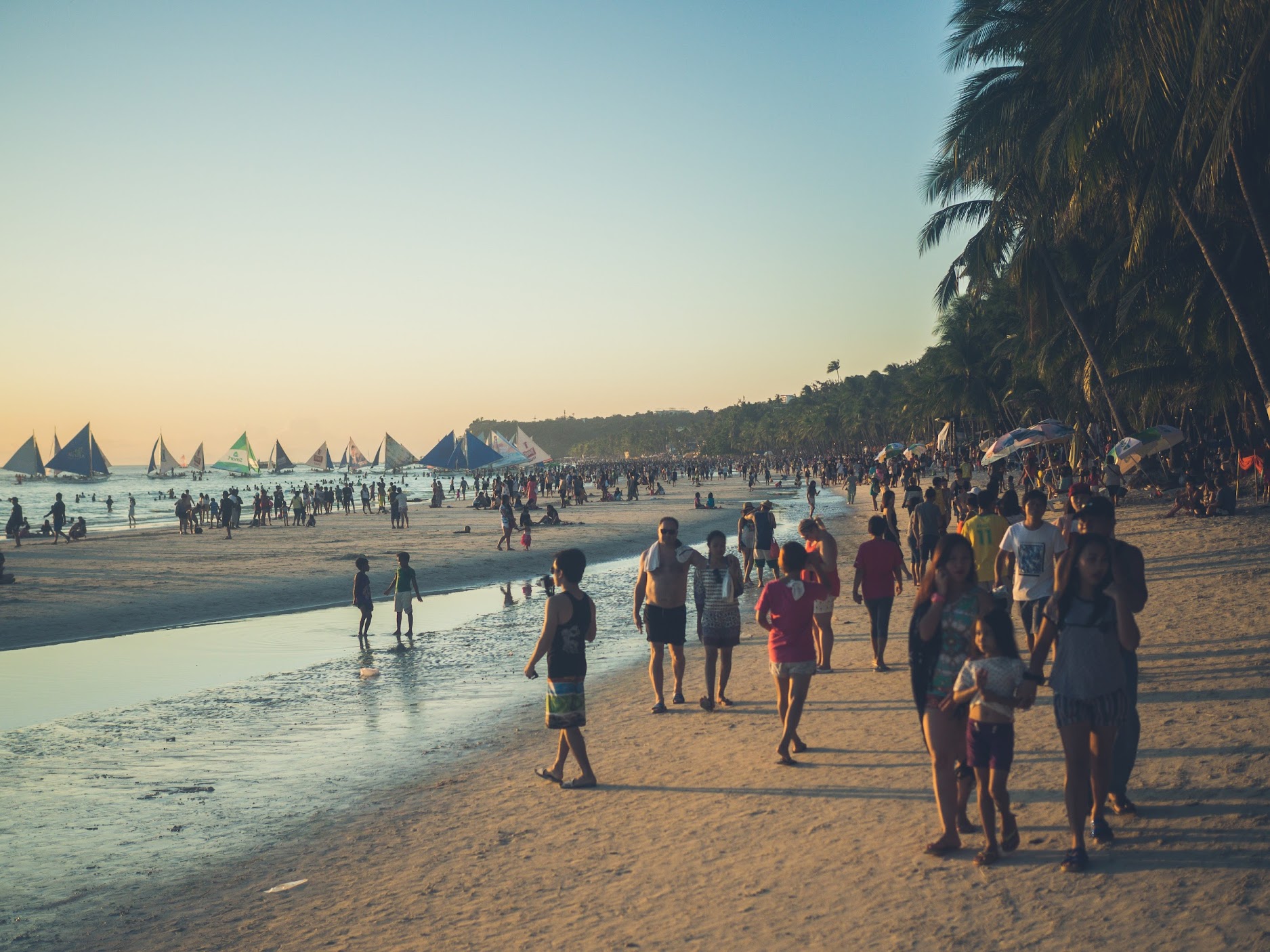 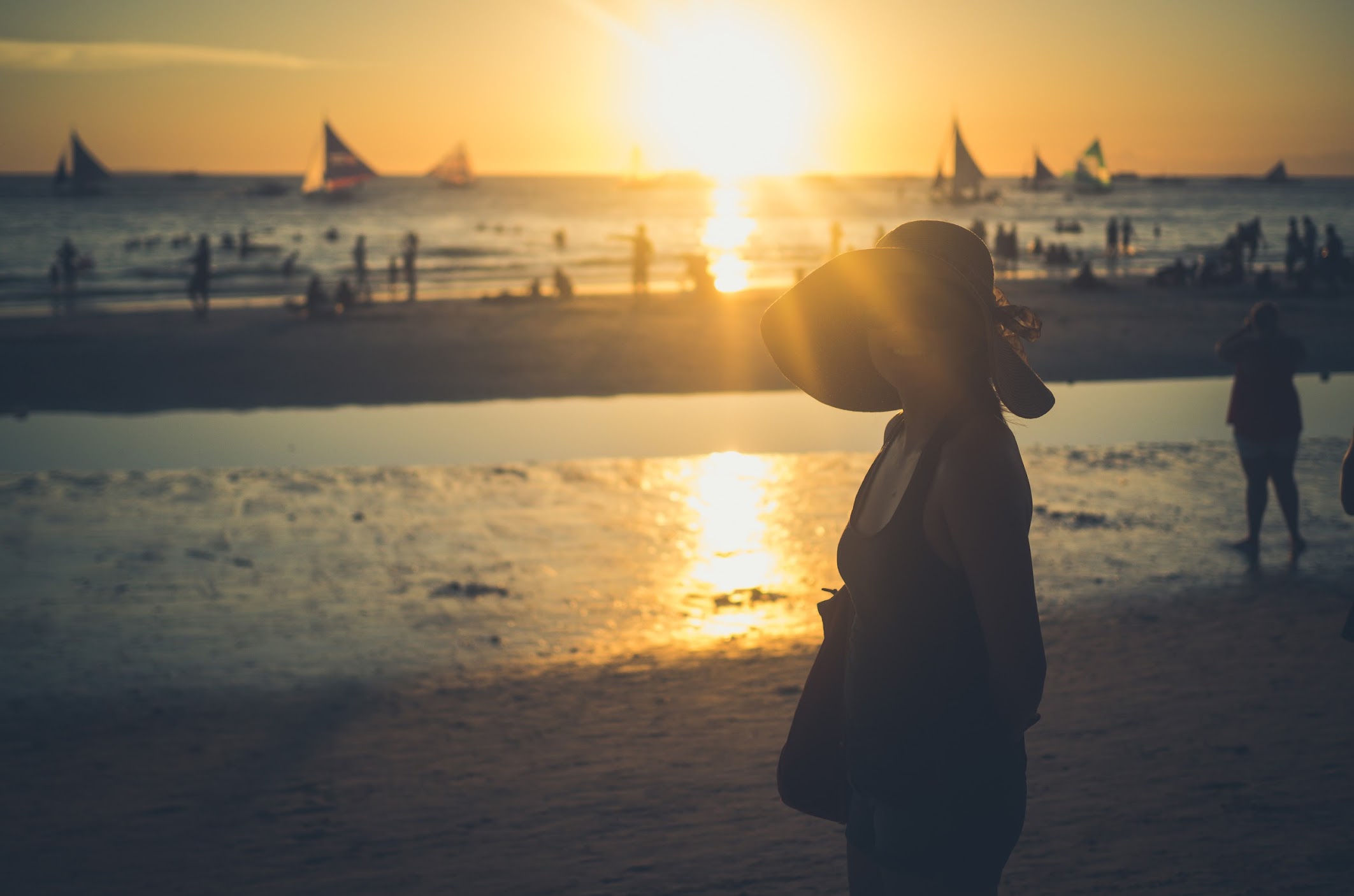 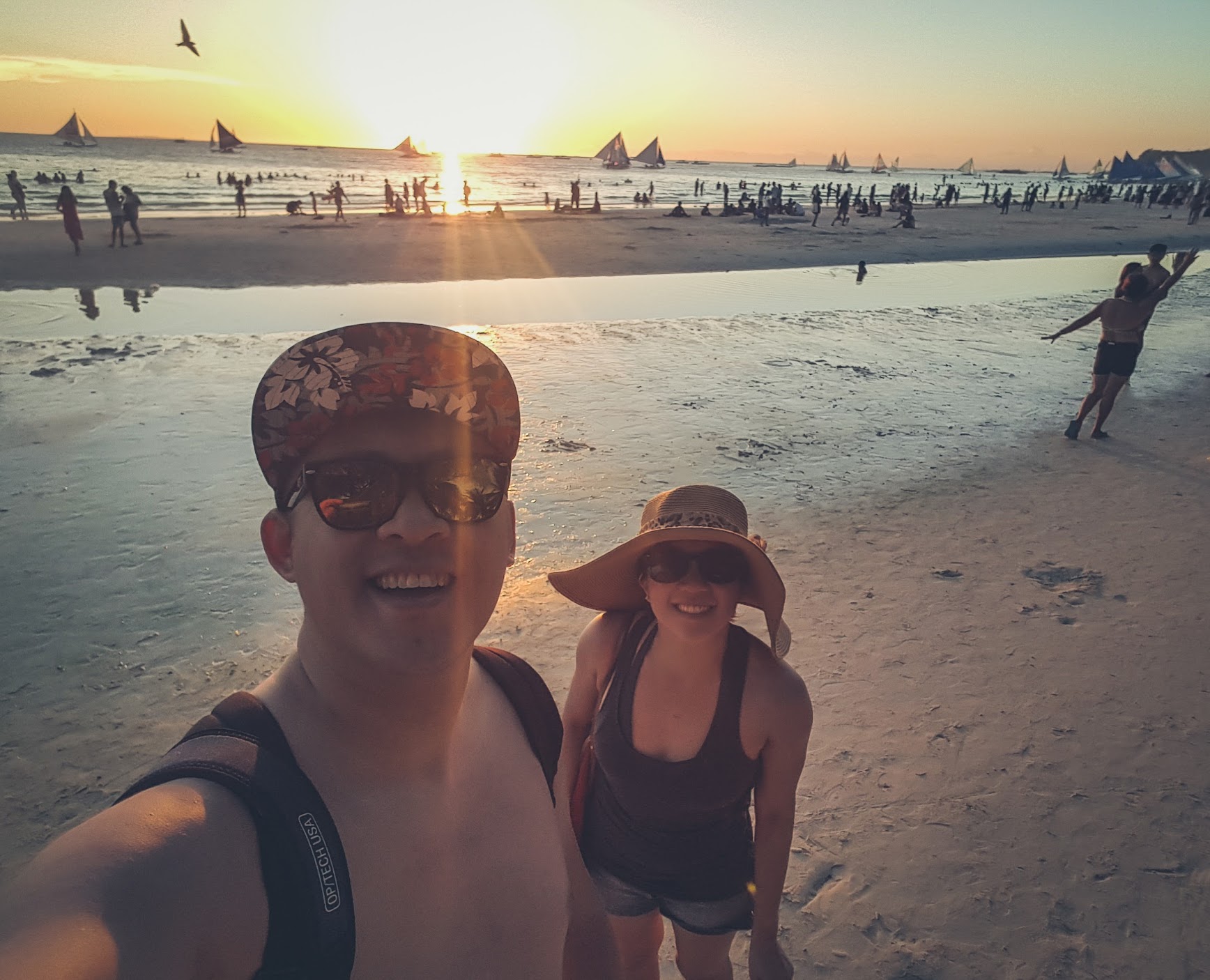 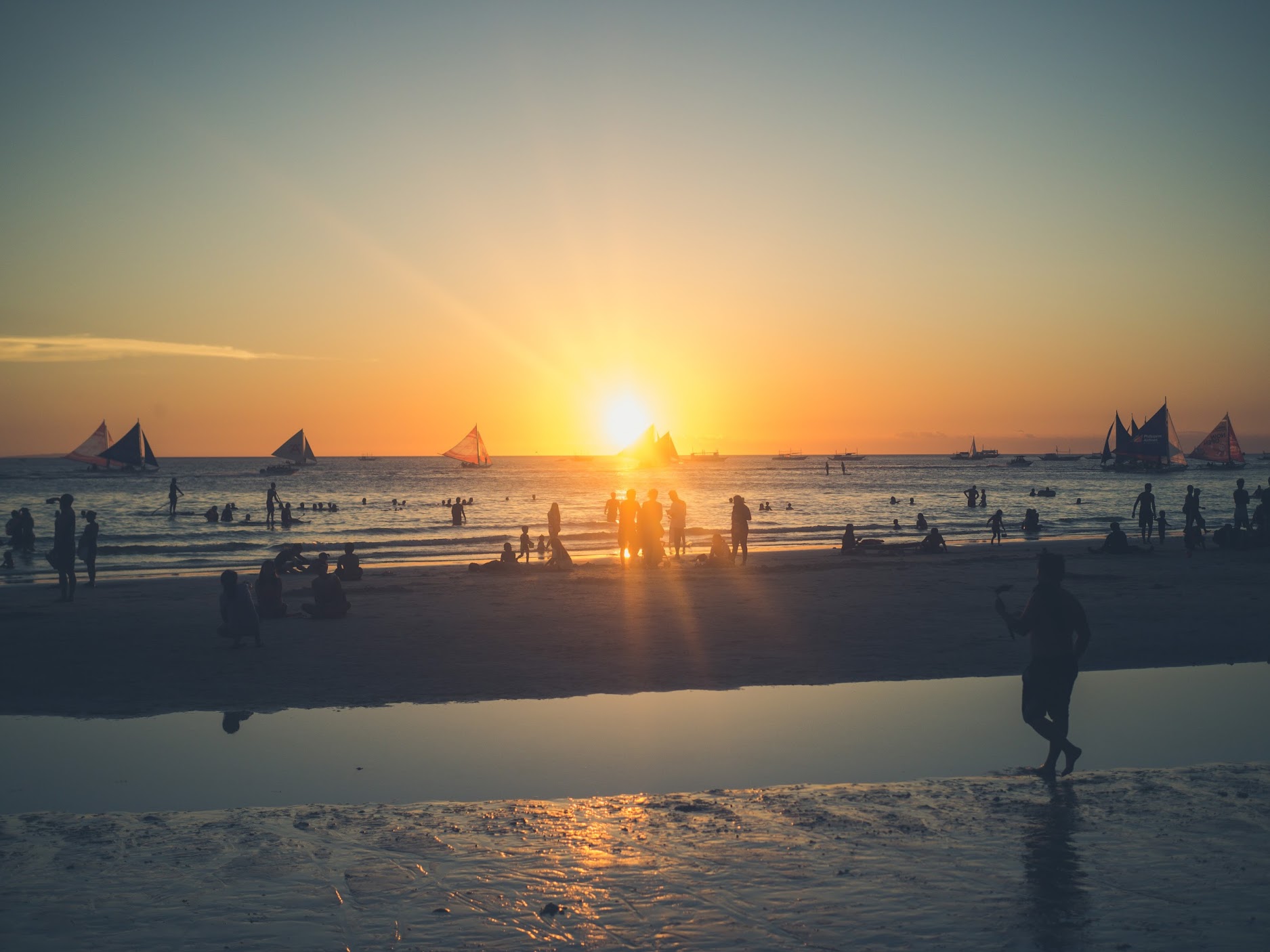 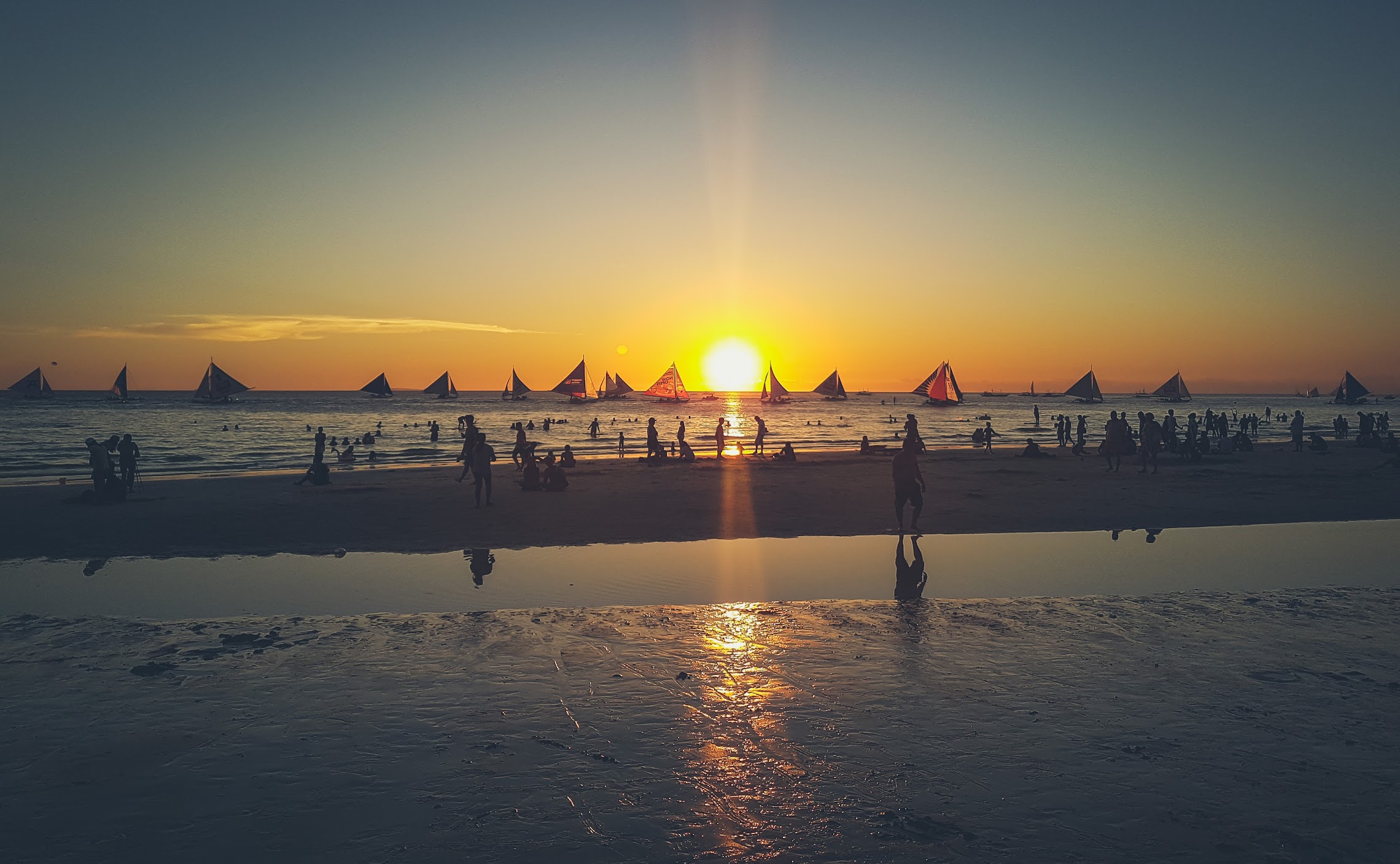 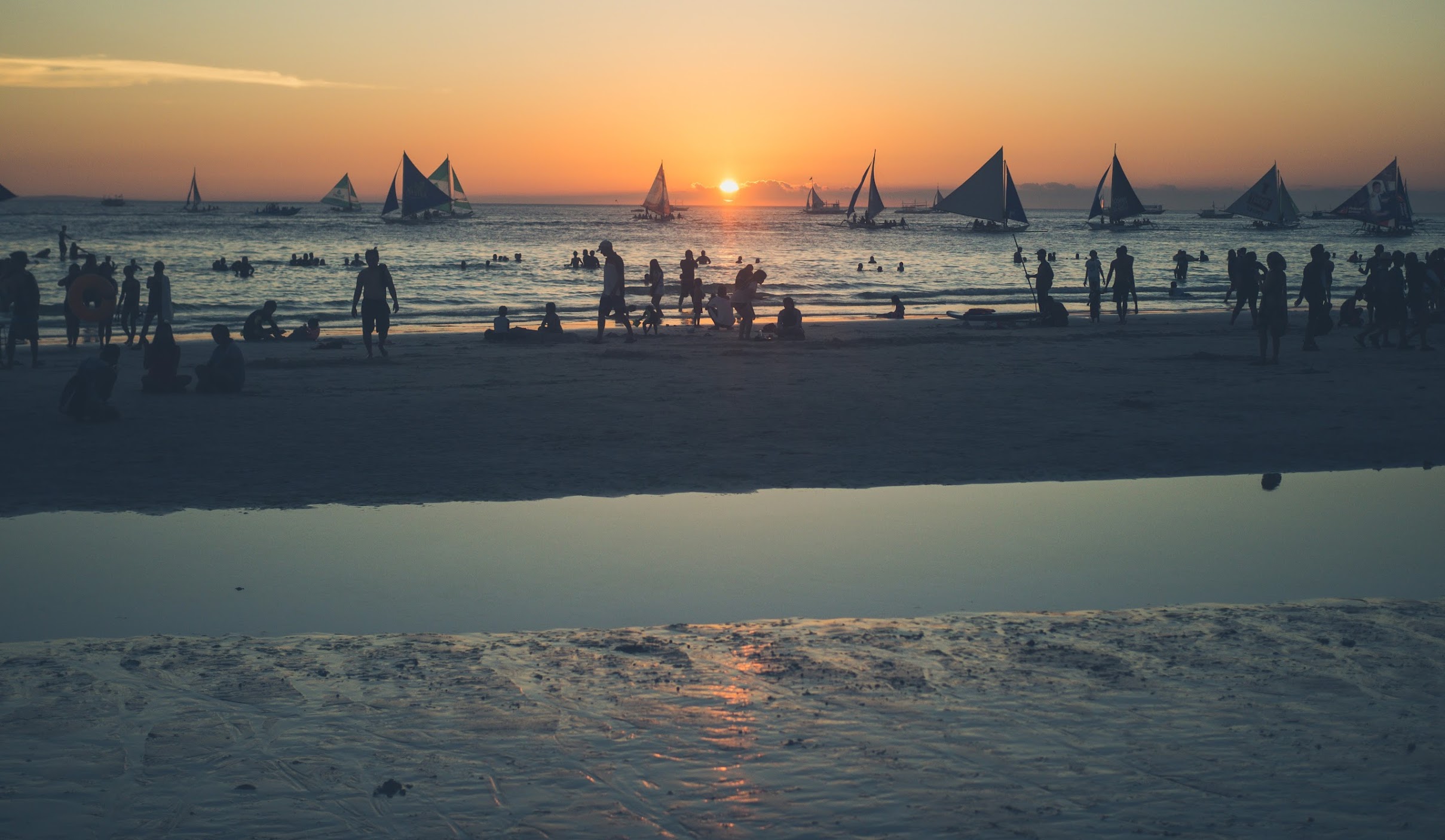 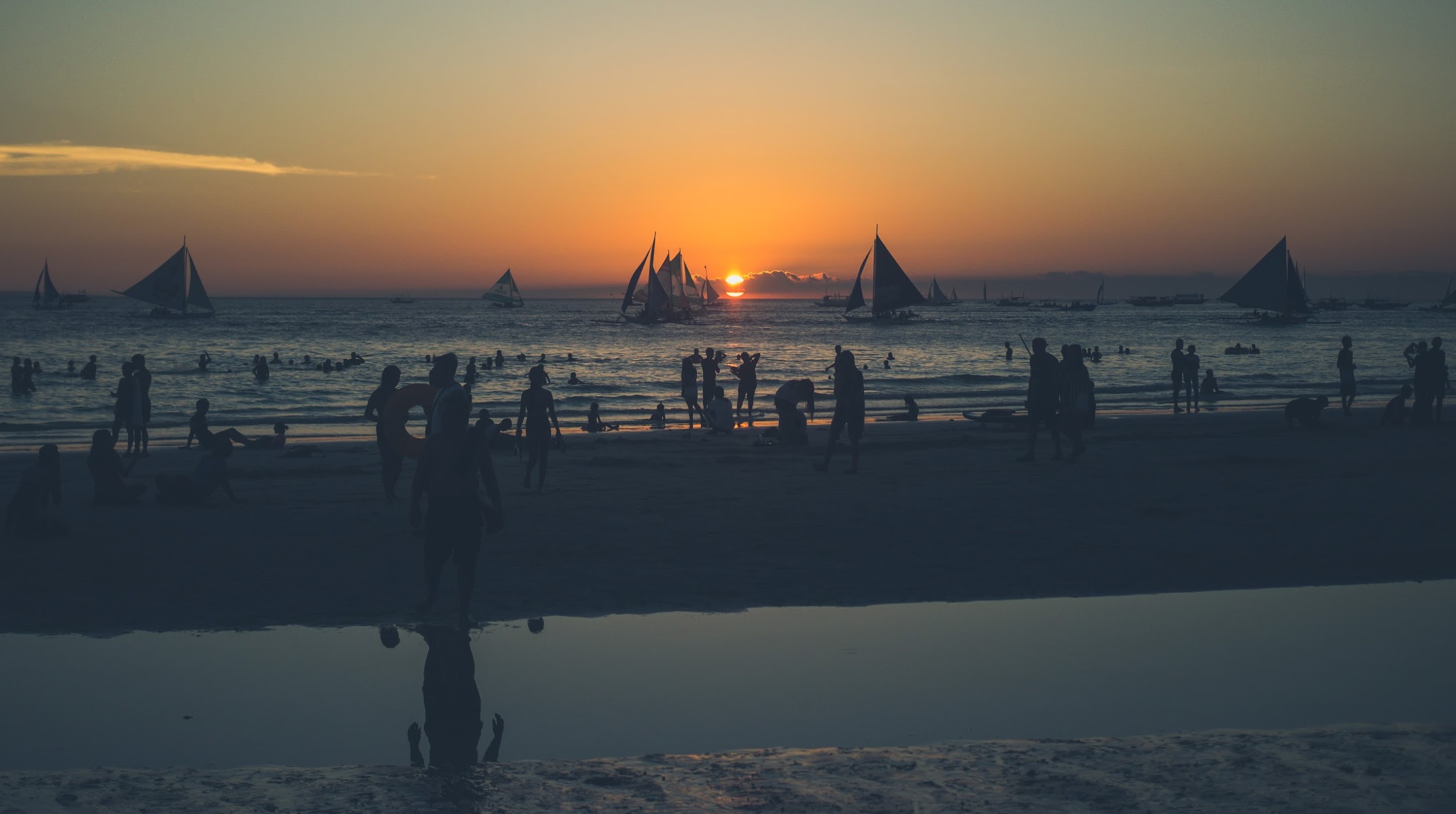 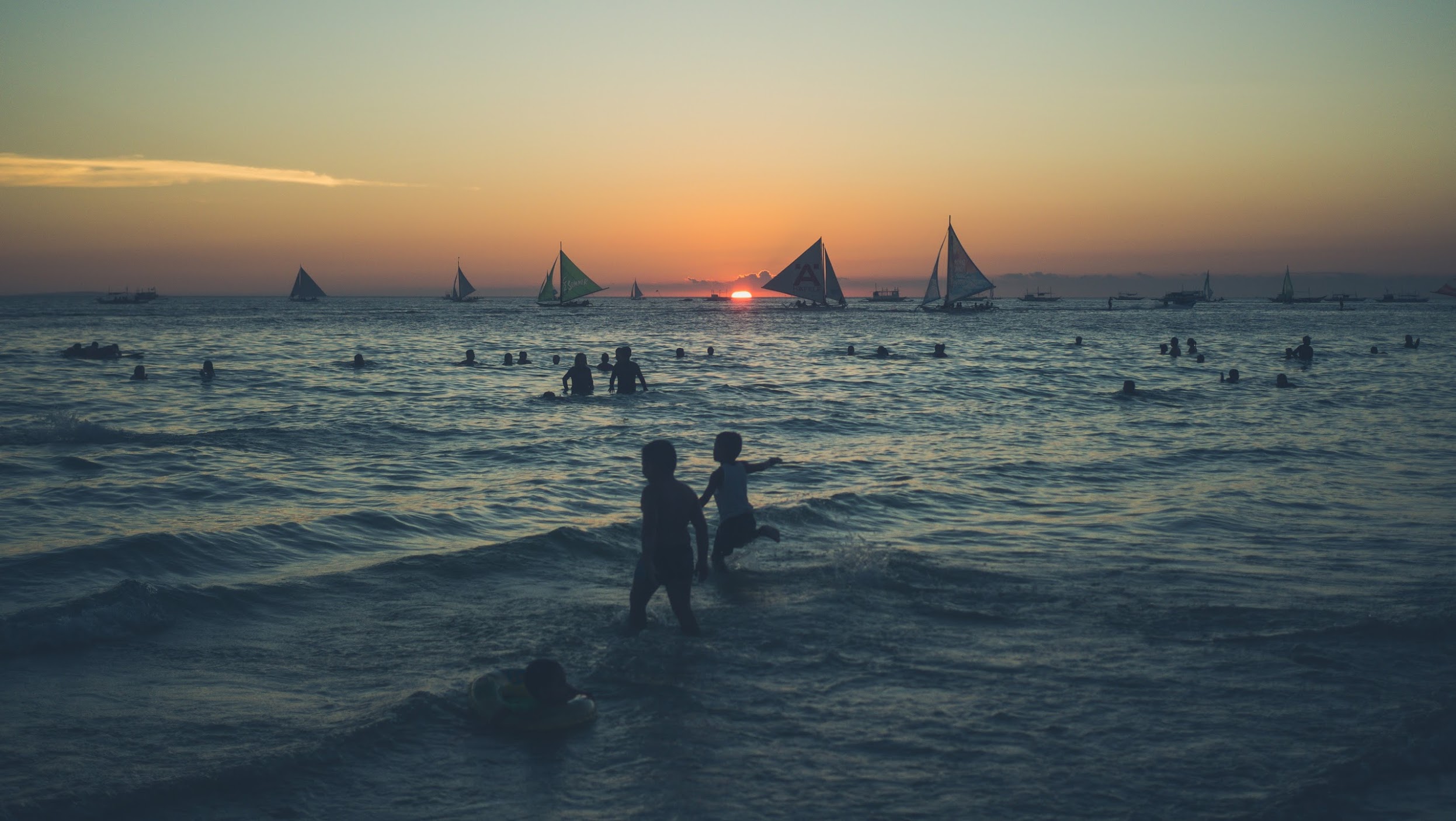 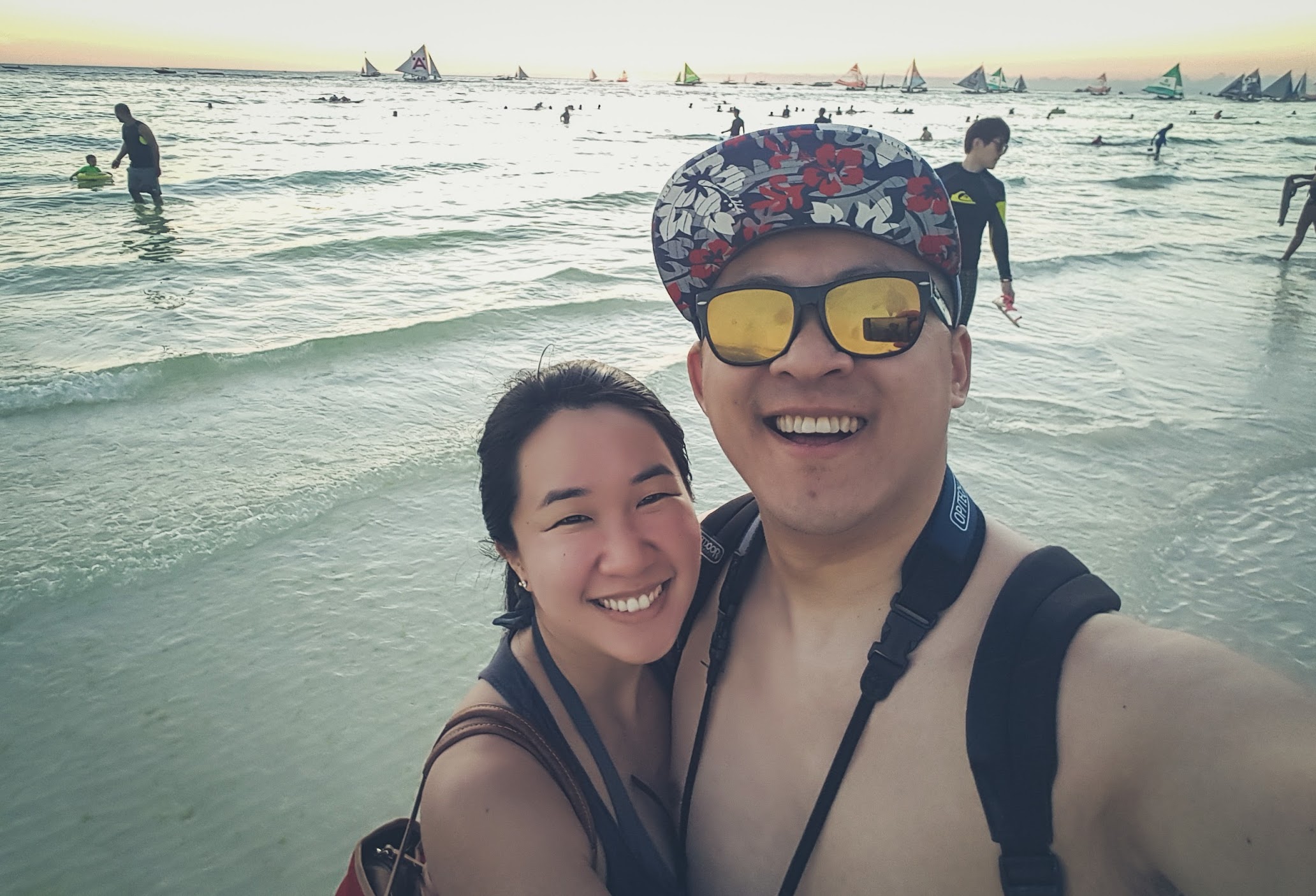 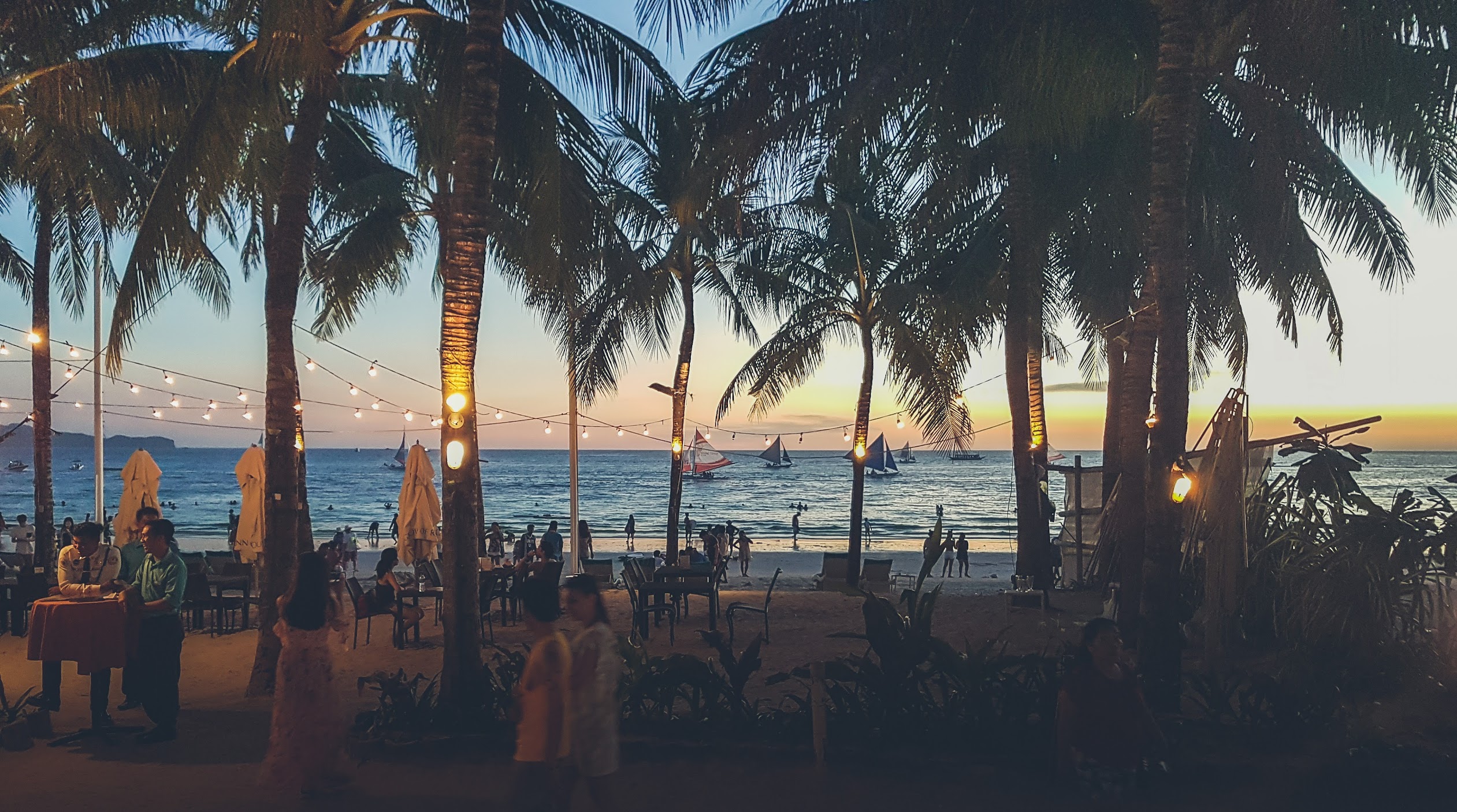 We had three more full days in Boracay, but our plans were pretty sparse. There were a couple of other beaches we wanted to check out, and a sailing trip with a bar in Station 3 that came with very enthusiastic recommendations from friends, but mostly we wanted to do nothing, lie in the sun, and maybe get some reading done. After the gorgeous sunset that first night, and a long, leisurely walk along the beach back to our hotel – stars twinkling and shining above, a cool ocean breeze in our faces, the sea lapping at our bare feet – things were looking up. Visions of blue skies and clear waters, fruit shakes and little umbrellas, filled our sun-dazed minds. Then we got back to the hotel and checked the weekend weather forecast – thunderstorms on Saturday, 100 percent chance of precipitation on Sunday, and 80 percent chance of precipitation on Monday. 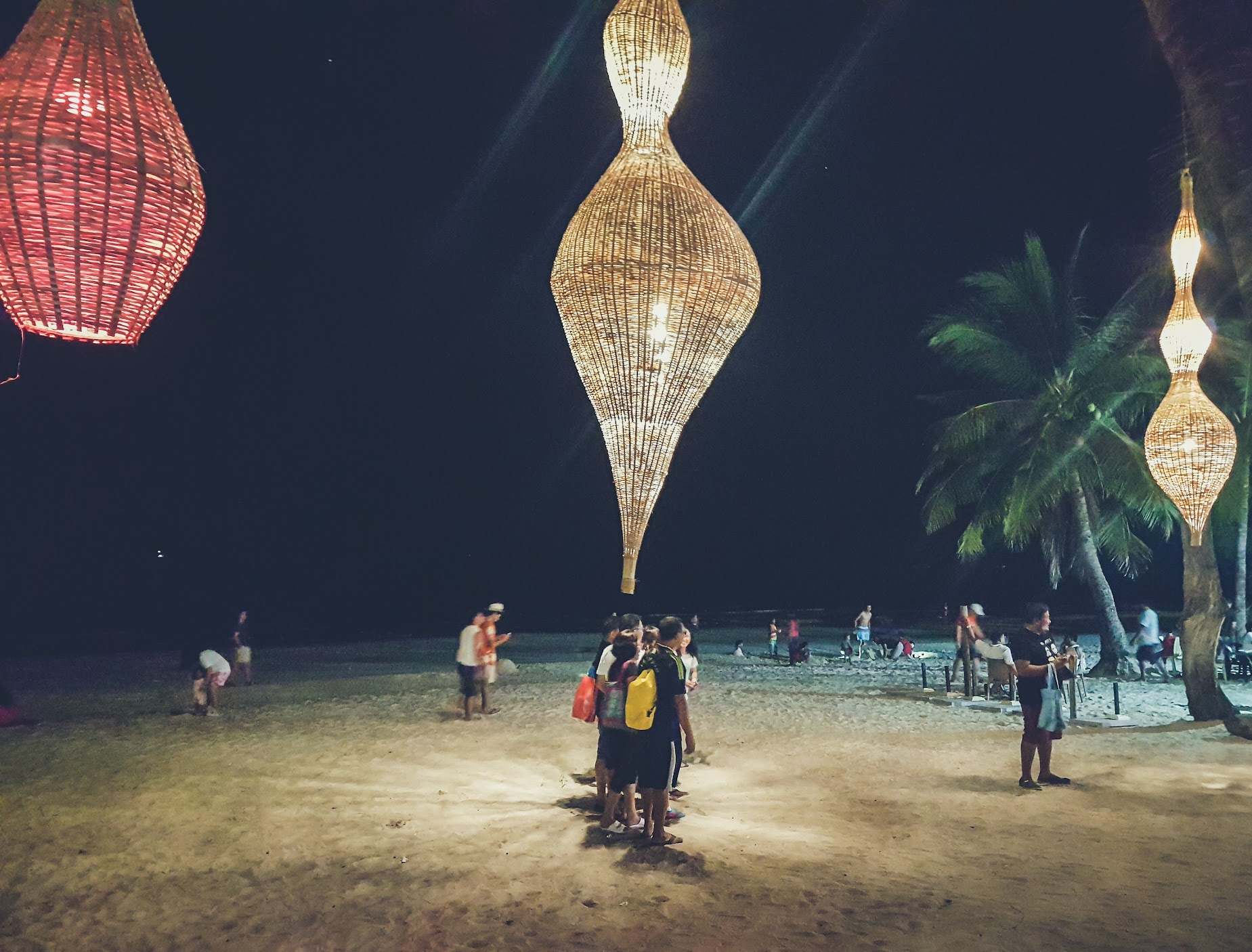