Oman is a land of two kingdoms – the cosmopolitan coast and the tribal interior. While the port cities of Muscat and Sur looked outwards and intermingled with the cultures of Mesopotamia and Persia, the inhabitants of the arid interior plateaus, canyons, and deserts drew lines of influence and power among themselves, organising into tribes and electing imams to rule the inland kingdom with both religious and temporal authority. Separated geographically from the riches of the coast by the Al Hajar Mountains, these polities nevertheless thrived in a harsh environment, and, when things were looking the most grim for the Omanis, it was an interior tribe that fought back against foreign invaders and ignited a golden age for Oman.

In the year 1507, the city of Muscat fell to a Portuguese force led by Afonso de Albuquerque, the so-called Lion of the Seas and the Caesar of the East. For the next 140-odd years, the coastal ports of Oman were controlled by the conquest-mad Portuguese, hell-bent on controlling the waterways around the vast Indian Ocean. The ruling Nabhani Dynasty could do little to dislodge the colonisers, their heyday having passed centuries before, and they exerted little control over the warring tribes of Oman. Thus, the stage was set in 1624 for one Nasir bin Murshid of the Yaruba tribe, the newly elected imam of the interior.

Nasir began uniting the various tribes and powers scattered throughout the land, subjugating and bending the tribes to his will for one common purpose: to expel the Portuguese from Oman. Armies loyal to the newly initiated Yaruba Dynasty arose from the valleys and deserts, marching through the mountains and swarming the coast, taking back the occupied cities one by one. By the time of his death in April 1649, only Muscat remained outside of his control.

His successor, Sultan bin Saif bin Malik, completed the reconquest in January 1650, returning Muscat into Omani hands for the first time in 143 years. With control re-established over the Gulf of Oman, the new sultan set to work directing overseas trade and wealth through his kingdom. Oman became the dominant sea power in the region, harassing and raiding Portuguese settlements in India and along the coast of East Africa, creating vital trade links and vastly increasing the prosperity of Oman. Ruling from his capital at Nizwa, at the crossroads of the Hajar Mountains and the arid interior beyond, the sultan oversaw a revival in governance, agriculture, trade, education and art.

Ashley and I spent a few days in the interior of Oman, and we were able to drop by a couple of the iconic forts and structures of the Yaruba period. One speaks to the military might of the dynasty; the other to its wealth and support of the arts and sciences.

Nizwa Fort is a testament to the might of the kingdom in the mid-17th Century. Constructed by Sultan bin Saif in the 1650s on top of an older series of forts built by 9th Century imam Sultan Al-Salt bin Malik, the structure is dominated by a massive tower 30 metres high and 36 metres in diameter. The only way up the tower is via a crooked series of staircases bristling with trap doors, false steps, thick wooden gates, and murder holes – special passageways that allowed defenders to pour boiling water or oil, and even date syrup, on unsuspecting invaders. From the top of the tower, the Yaruba Dynasty sultans had a commanding view of the surrounding countryside, imposing their might and authority along the crossroads of the kingdom.

What I loved about Nizwa Fort on a purely aesthetic level was the near-minimalist look and feel of the structure: the uniform colour themes, the clean lines, the symmetries, and the sense that each room and passageway was designed with form and function in mind. As someone who enjoys the photography aspect of travel, the fort’s various angles and lines were a joy to capture. Ashley and I also enjoyed wandering its nooks and crannies, clambering up stone stairs and around shaded corners to find room and halls unfolding before us. Nizwa Fort is the most popular tourist site in Oman, which doesn’t necessarily mean it’ll be crowded – most places we visited in the country, even the more tourist-friendly locations, didn’t have very many people. There is a small entry fee, and visitors should be aware of the different opening hours on Fridays (8:00 am to 11:00 am). 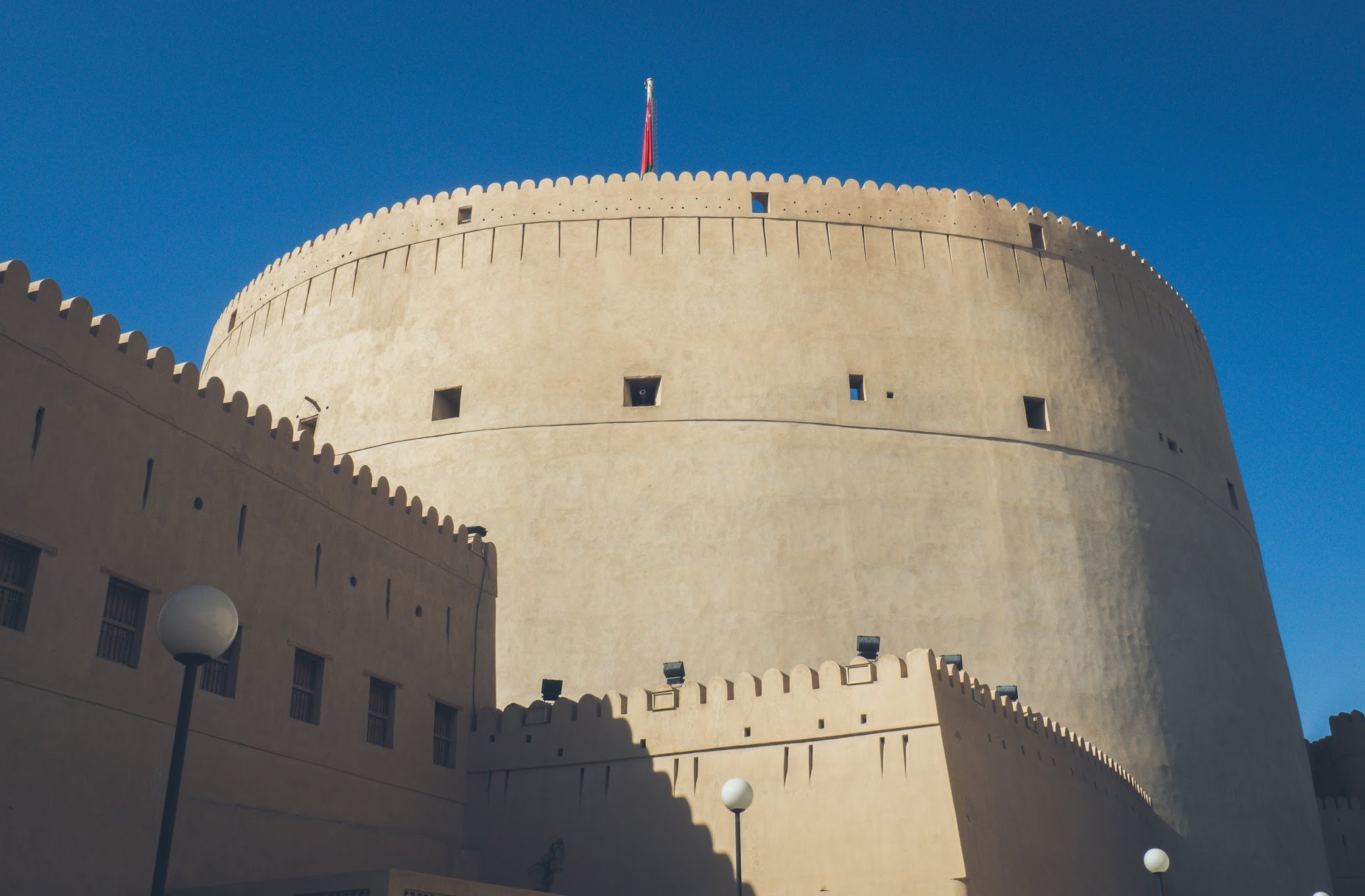 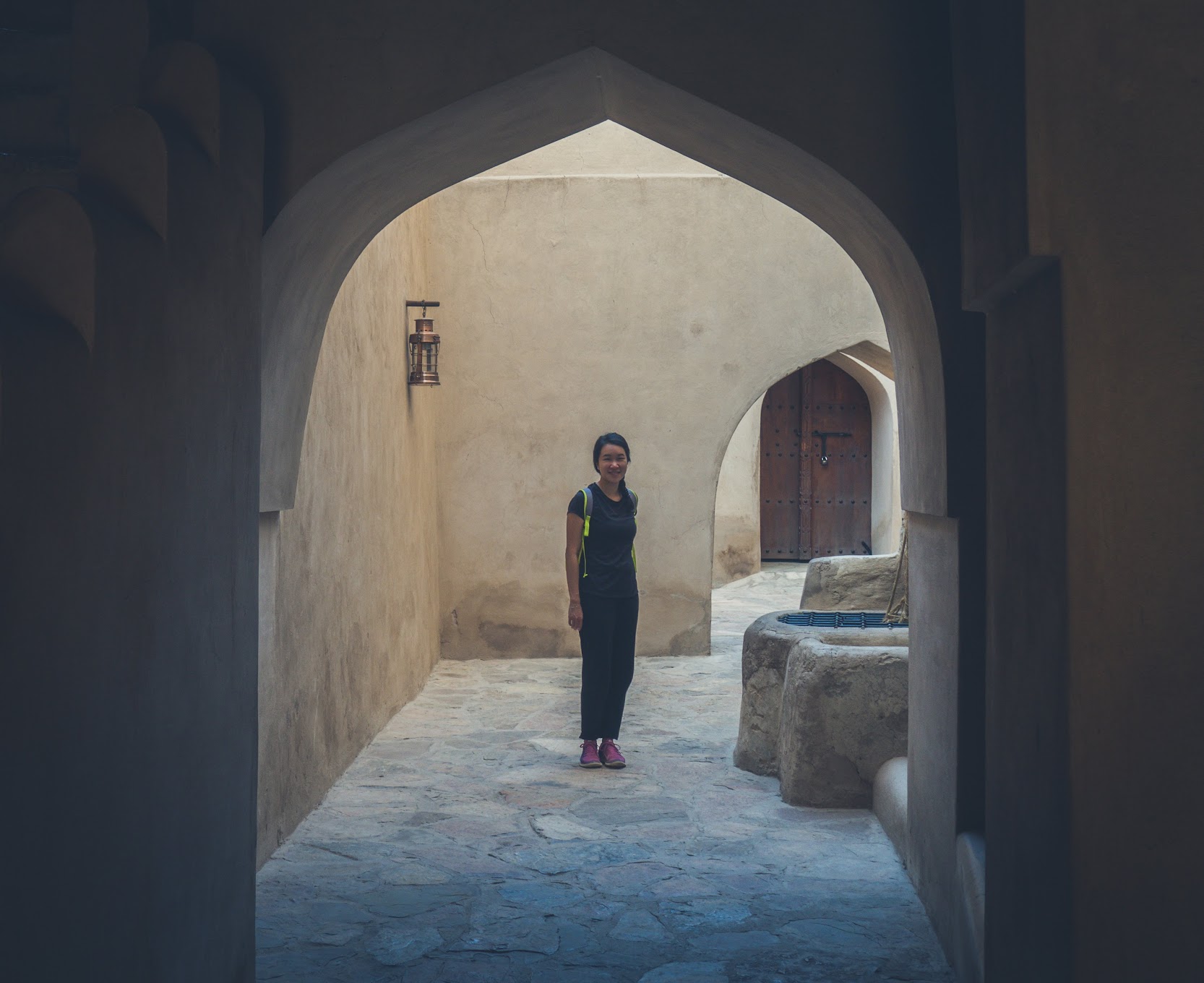 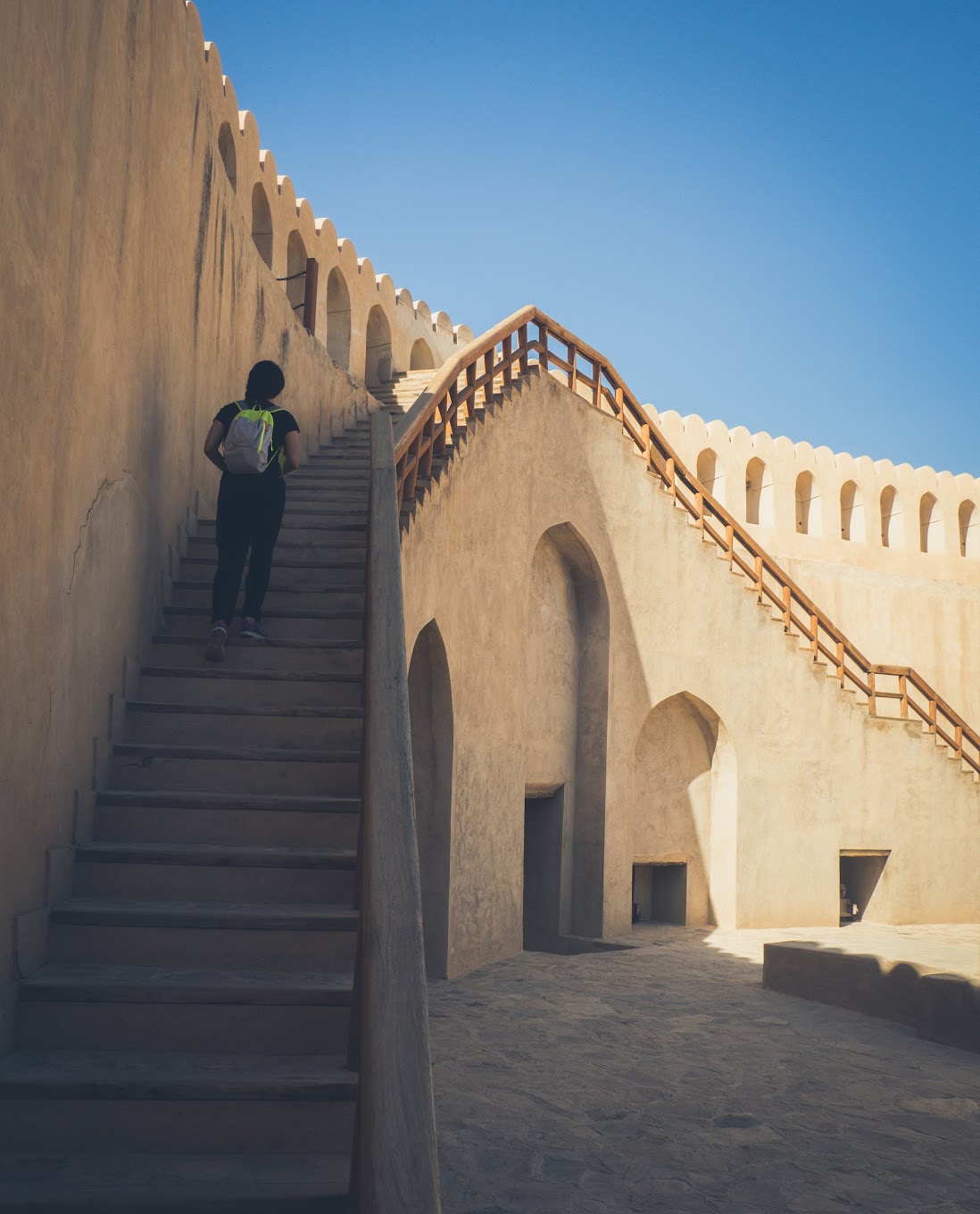 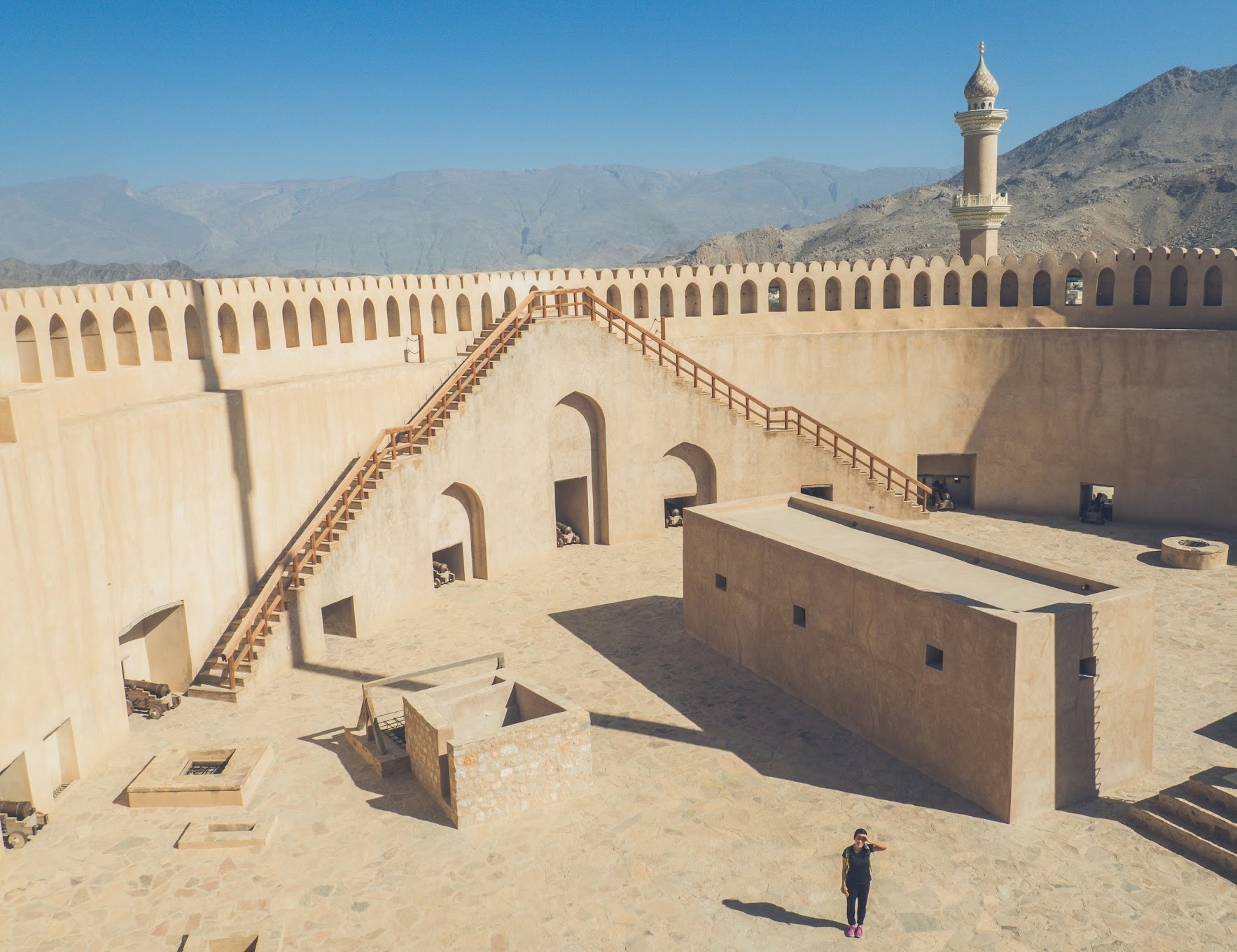 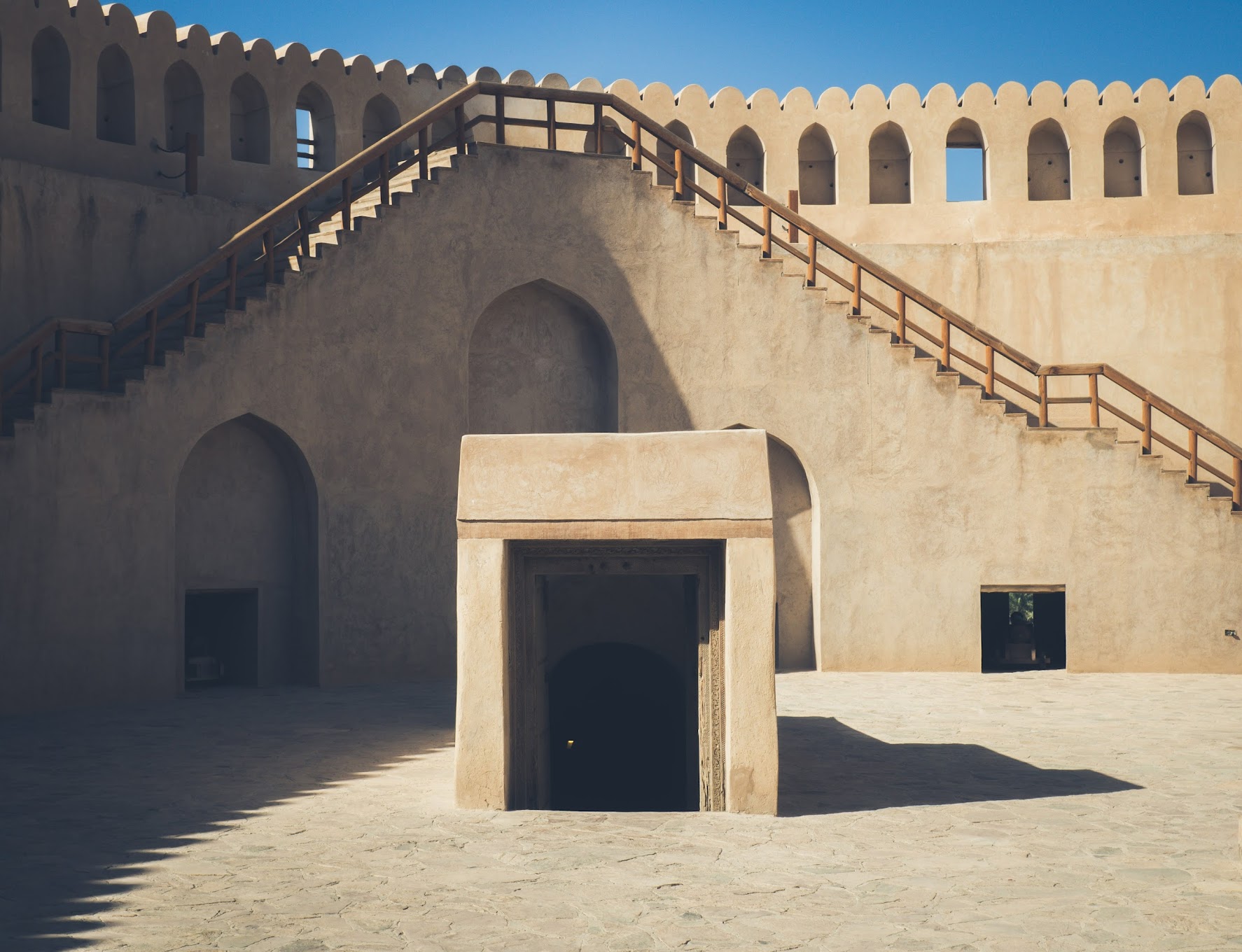 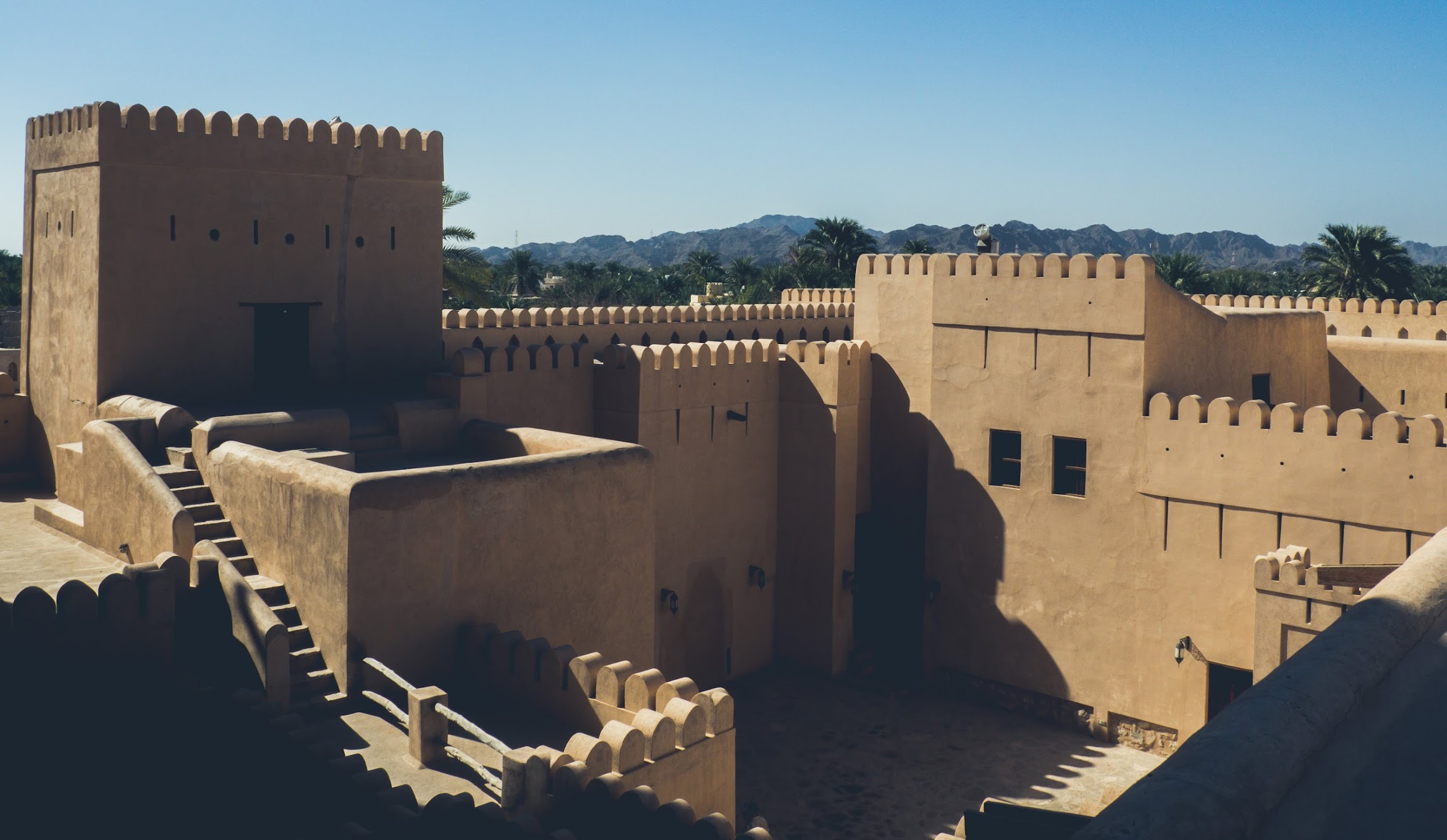 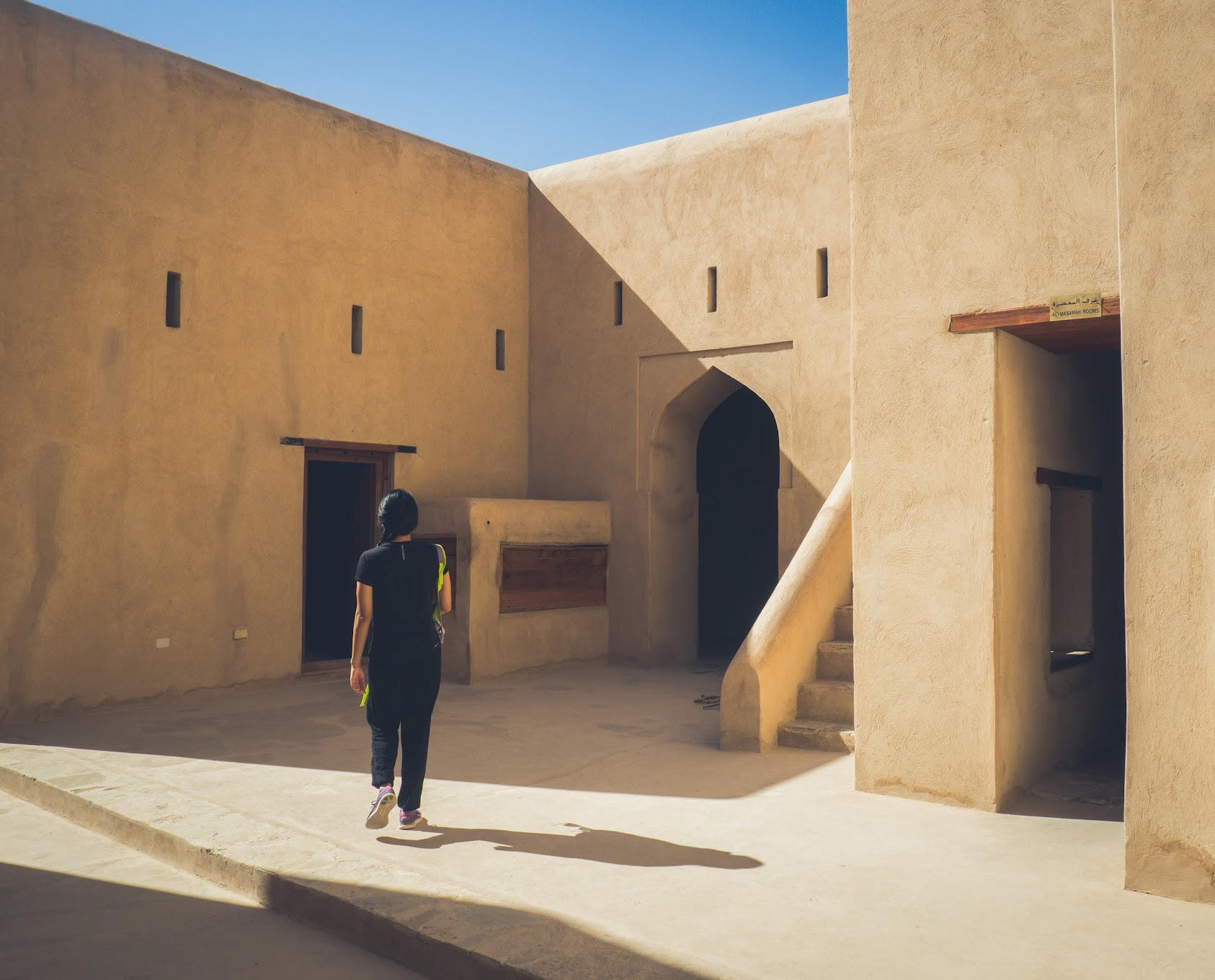 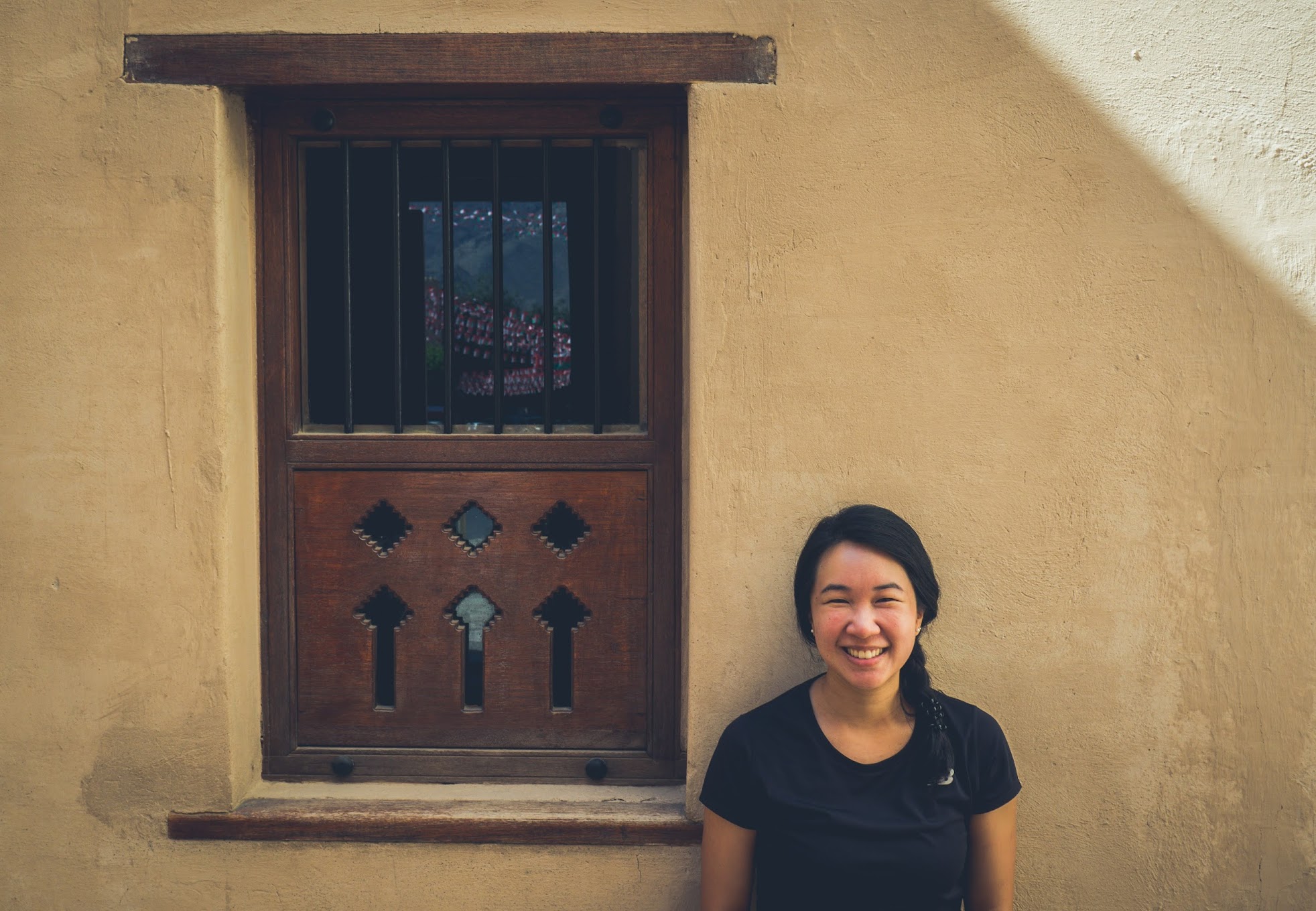 While Nizwa Fort was built as a symbol of Yaruba power and might, as well as a legitimate fortress to defend the rich capital from opposing forces, Jabrin Castle was designed and constructed as a peacetime palace, a symbol of the ruling dynasty’s wealth and prosperity. Built by Bil’arab bin Sultan, the son of Sultan bin Saif, in 1670, the five floors and fifty-five rooms of the palace include quarters for the sultan and his family, reception halls, libraries, classrooms, dining halls, and the famous Sun and Moon Room, where the sultan met with visitors in a naturally air-conditioned space: seven floor-level windows draw cool air in, while the hot air is pushed out of the seven windows closer to the ceiling.

Located about thirty minutes drive from Nizwa in the town of Jabrin, the palace’s relatively more complicated layout, relative to Nizwa Fort, made it a little more interesting to explore and wander around in. Stairways snaked through the castle, connecting carpeted halls and libraries with private rooms and hidden niches, and the castle caretakers provided detailed audio guides that added much needed context as we walked through the grounds (there’s a small fee but for whatever reason they gave both of us an audio guide device for free that day). The tourism numbers are in favour of Nizwa Fort, but Jabrin Castle more than holds its own. In fact, I’d recommend setting aside more time for Jabrin Castle and its fascinating peek into Omani royal life in the time of the Yarubas. 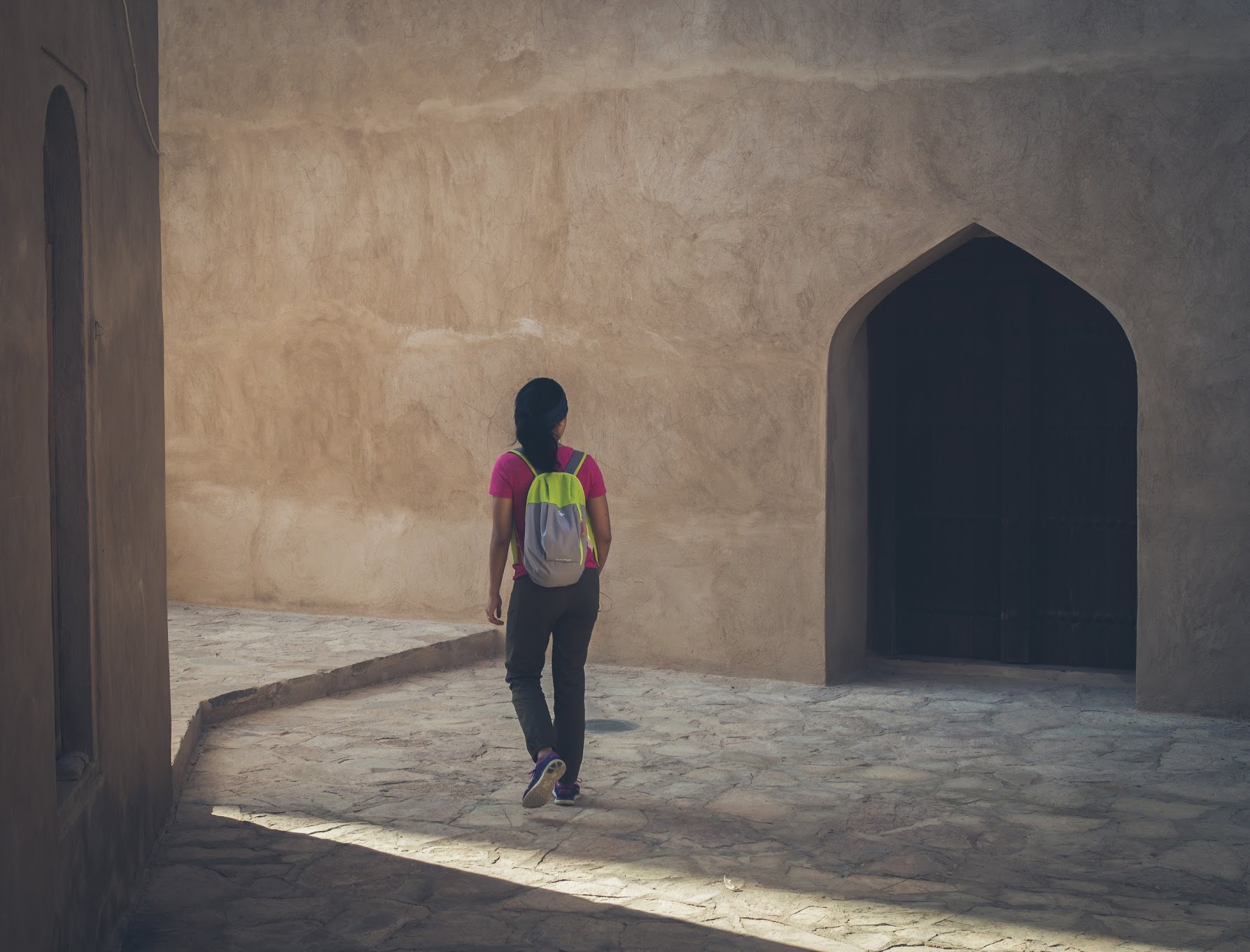 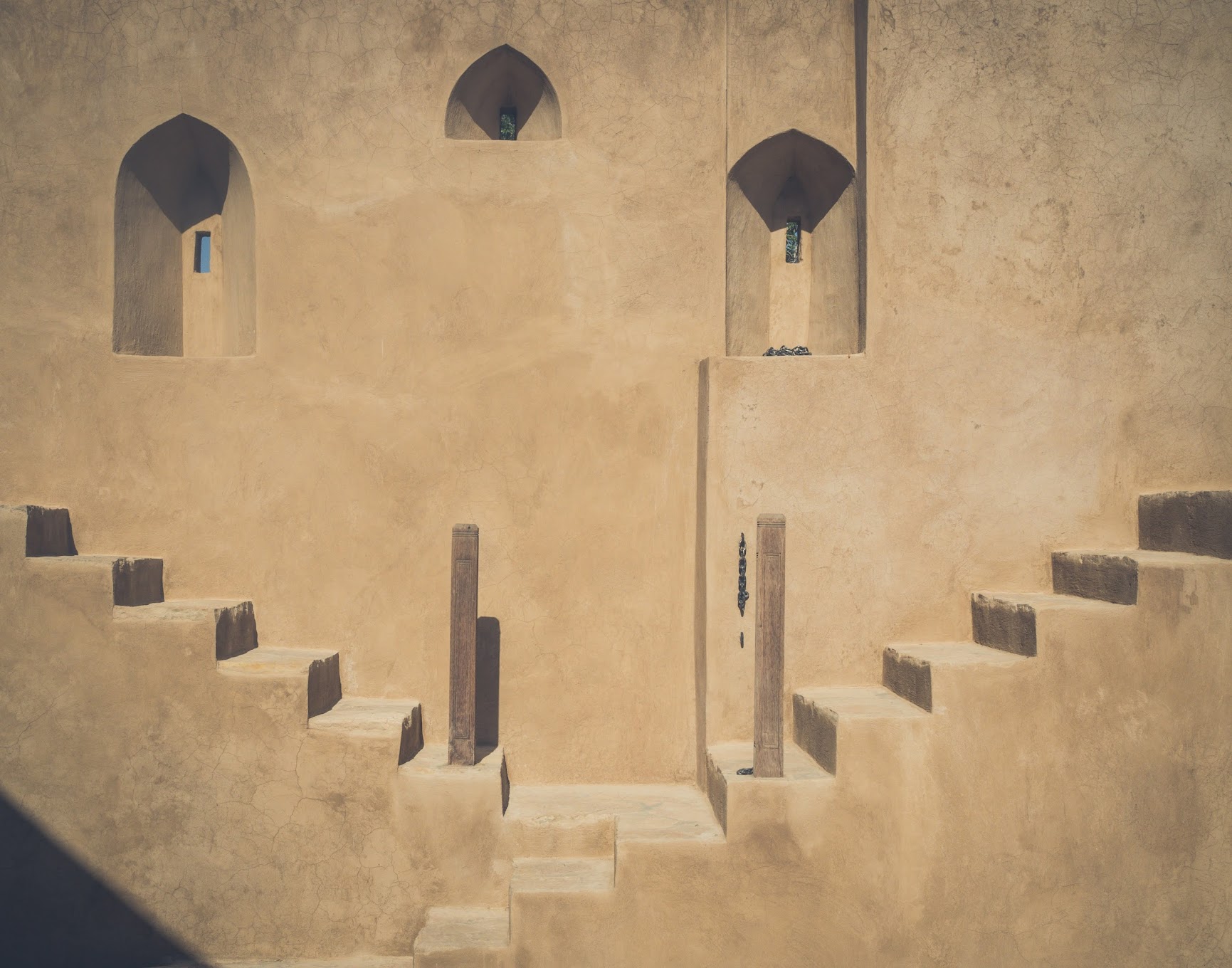 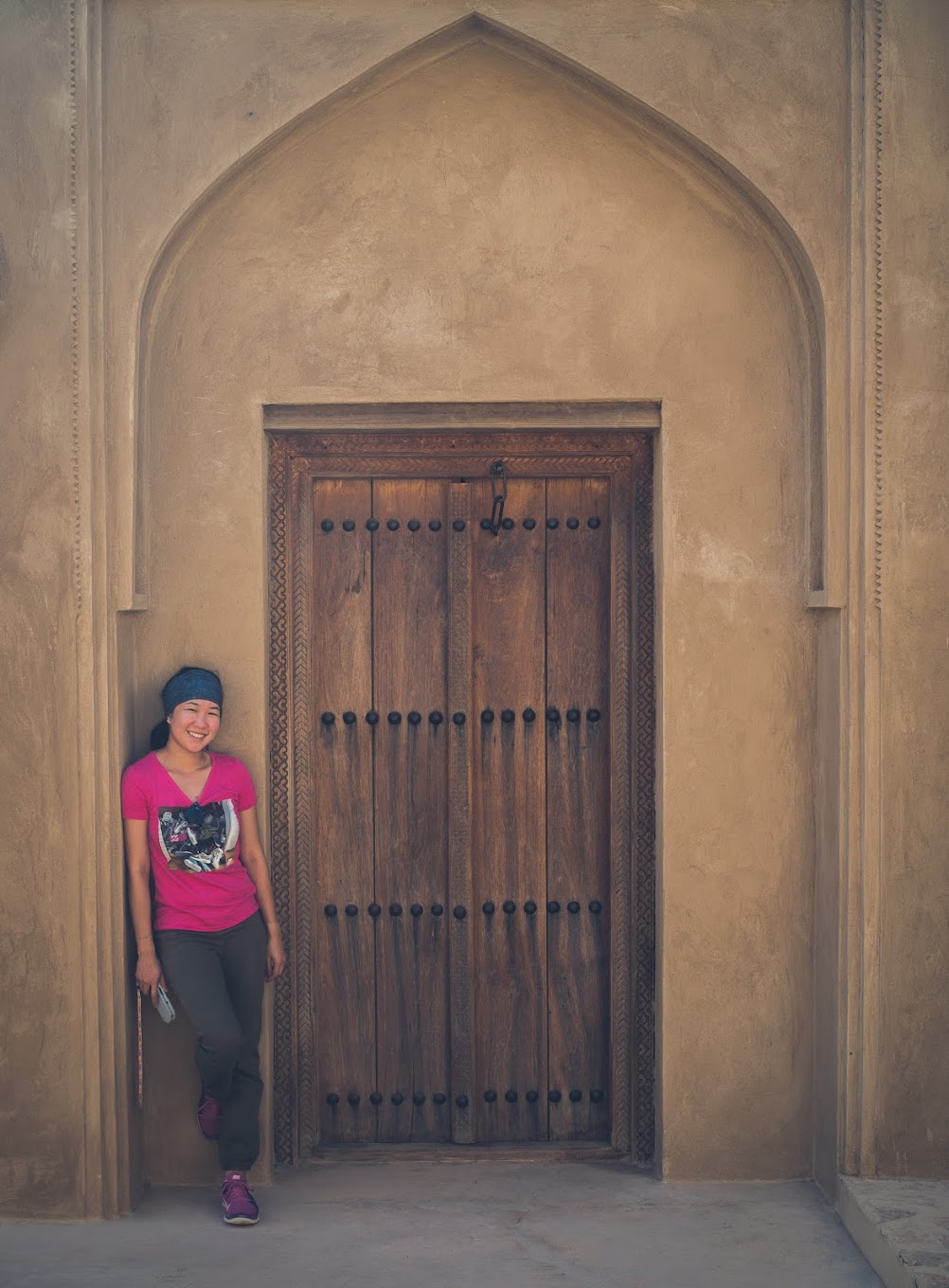 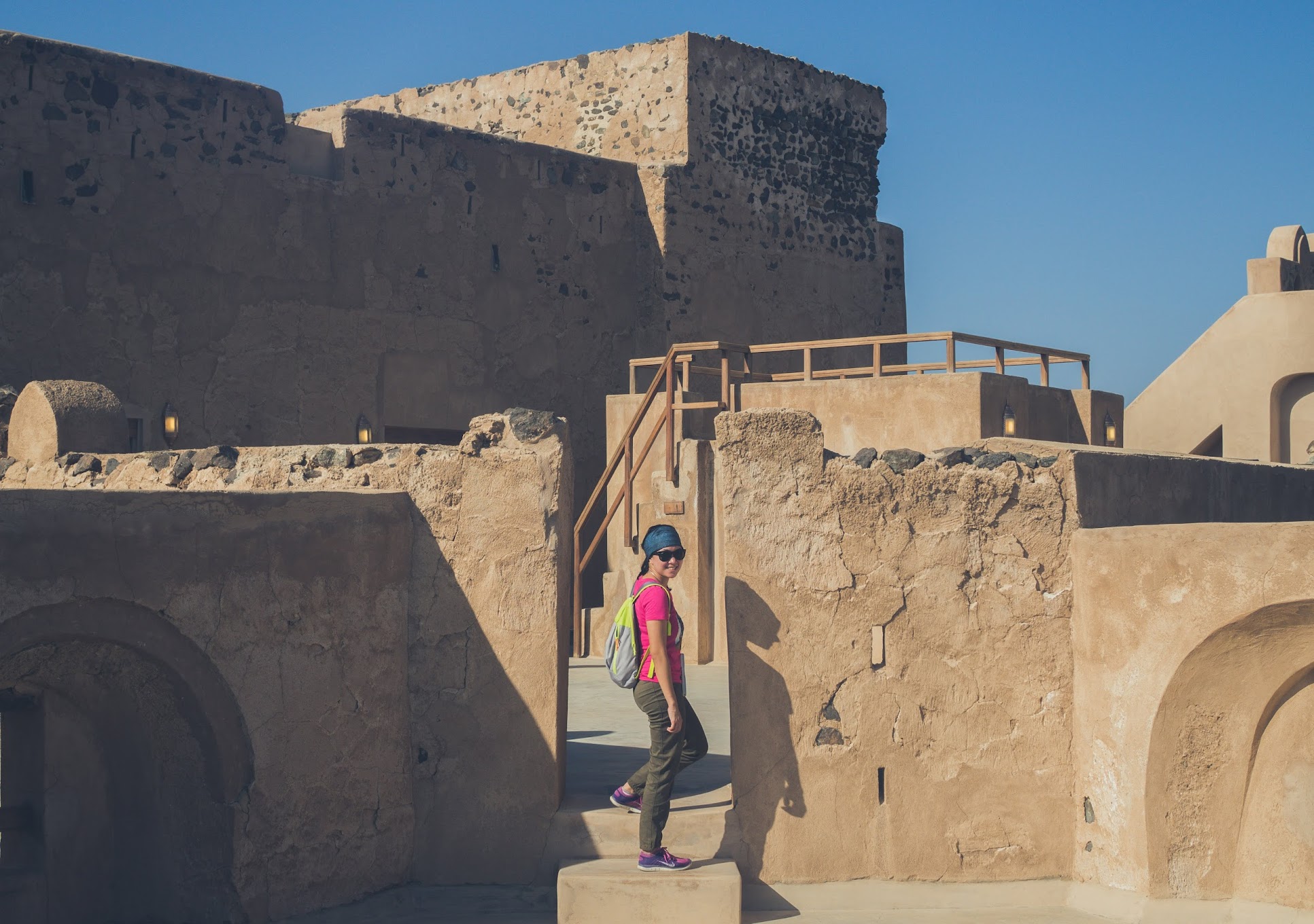 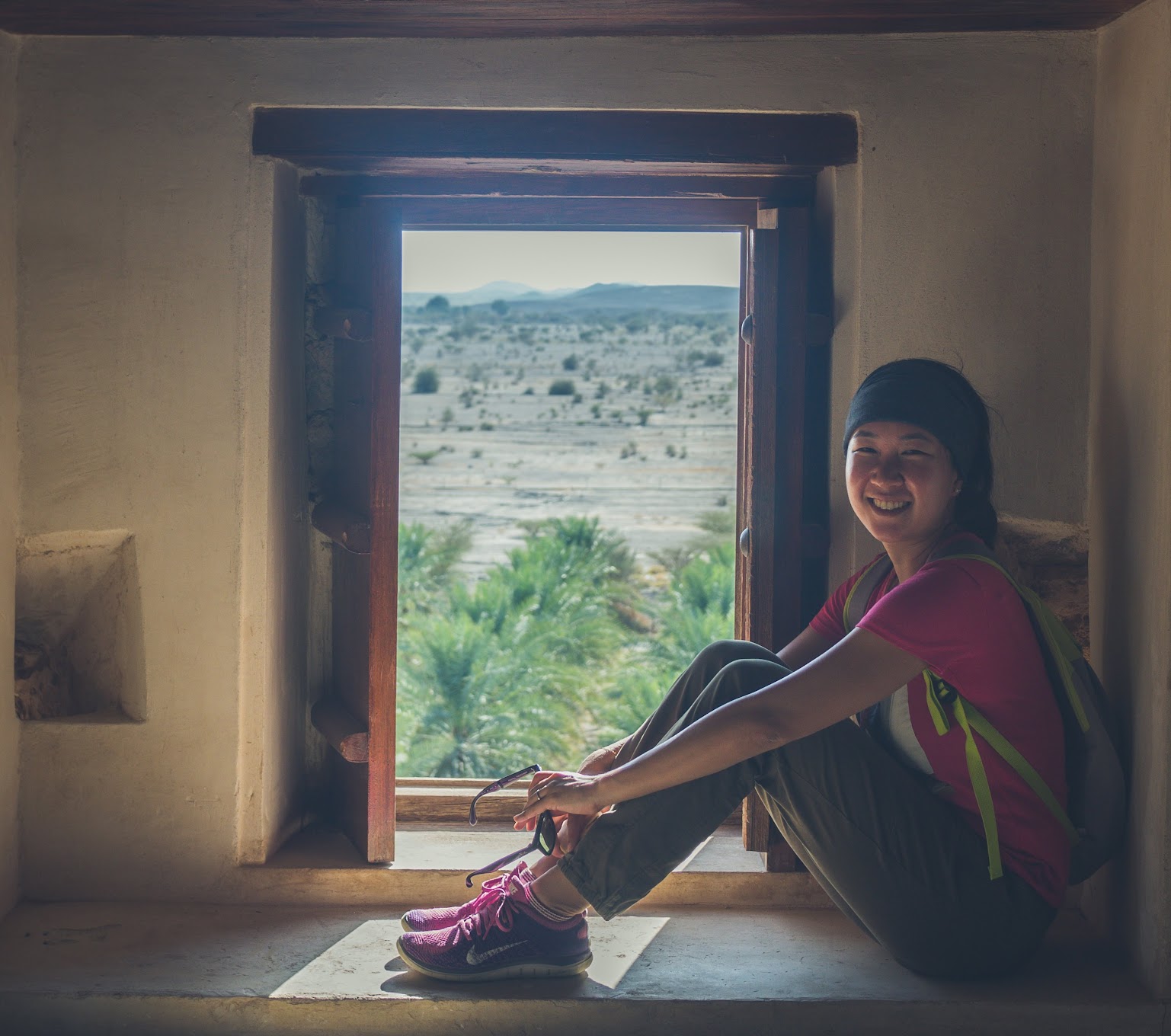 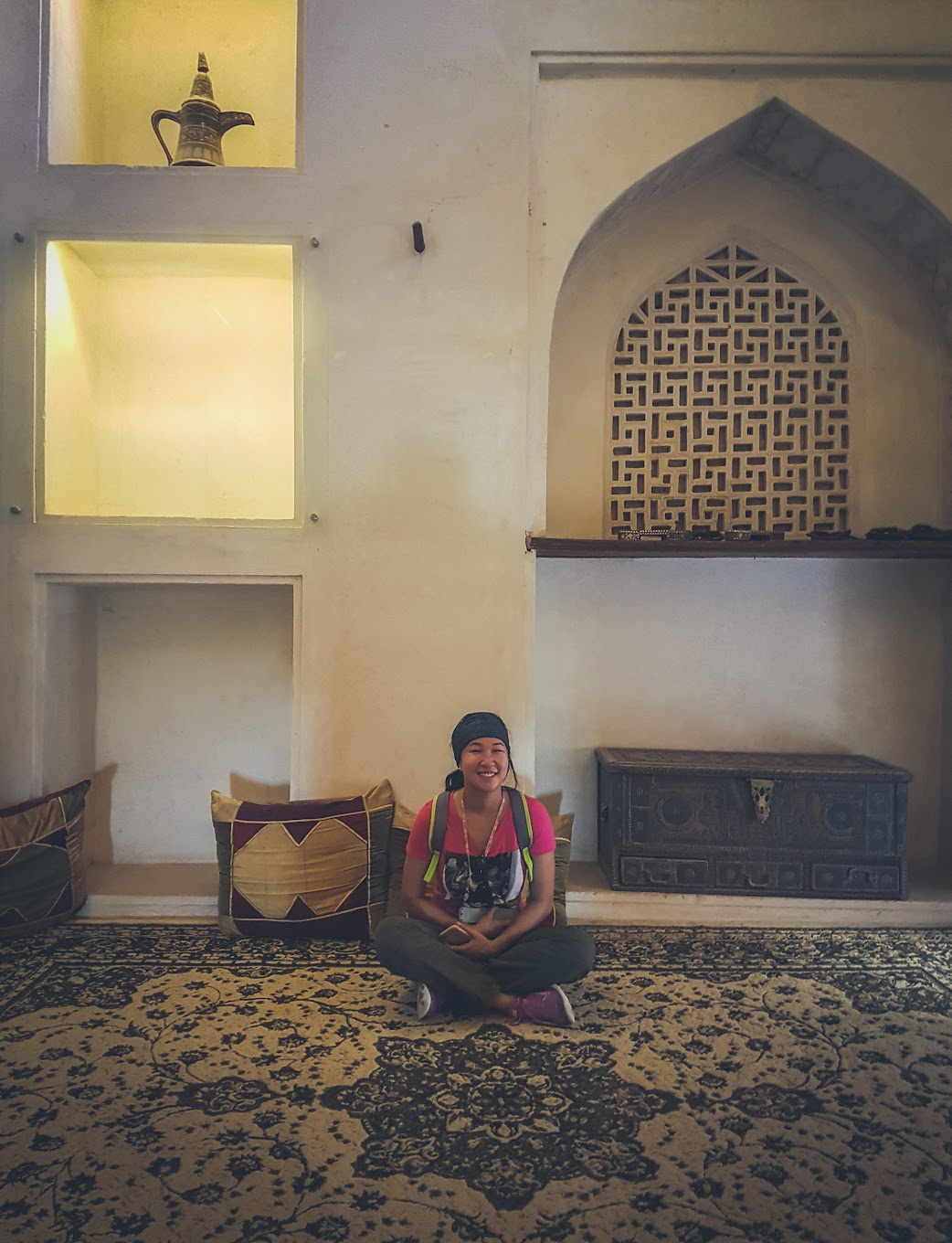 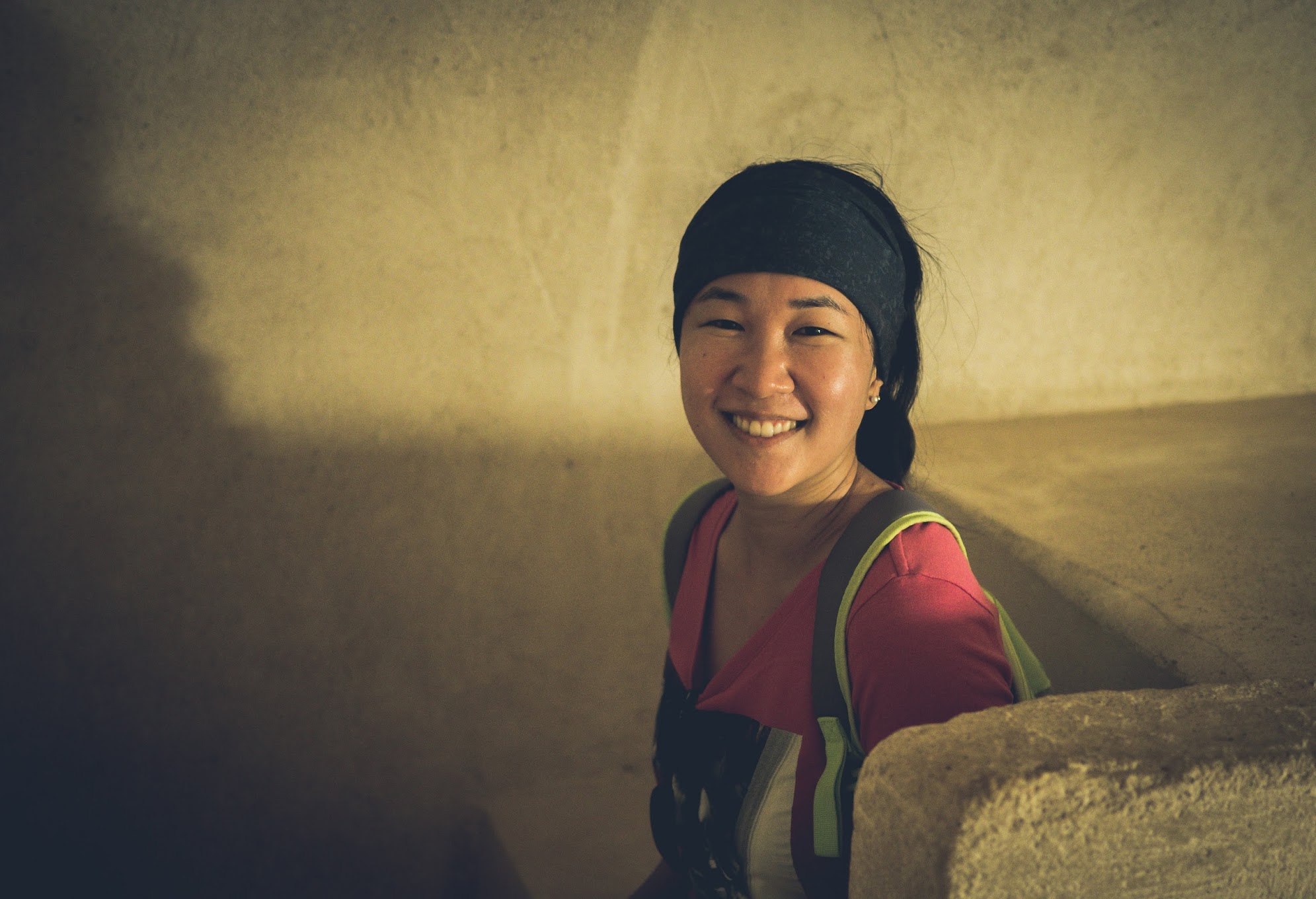 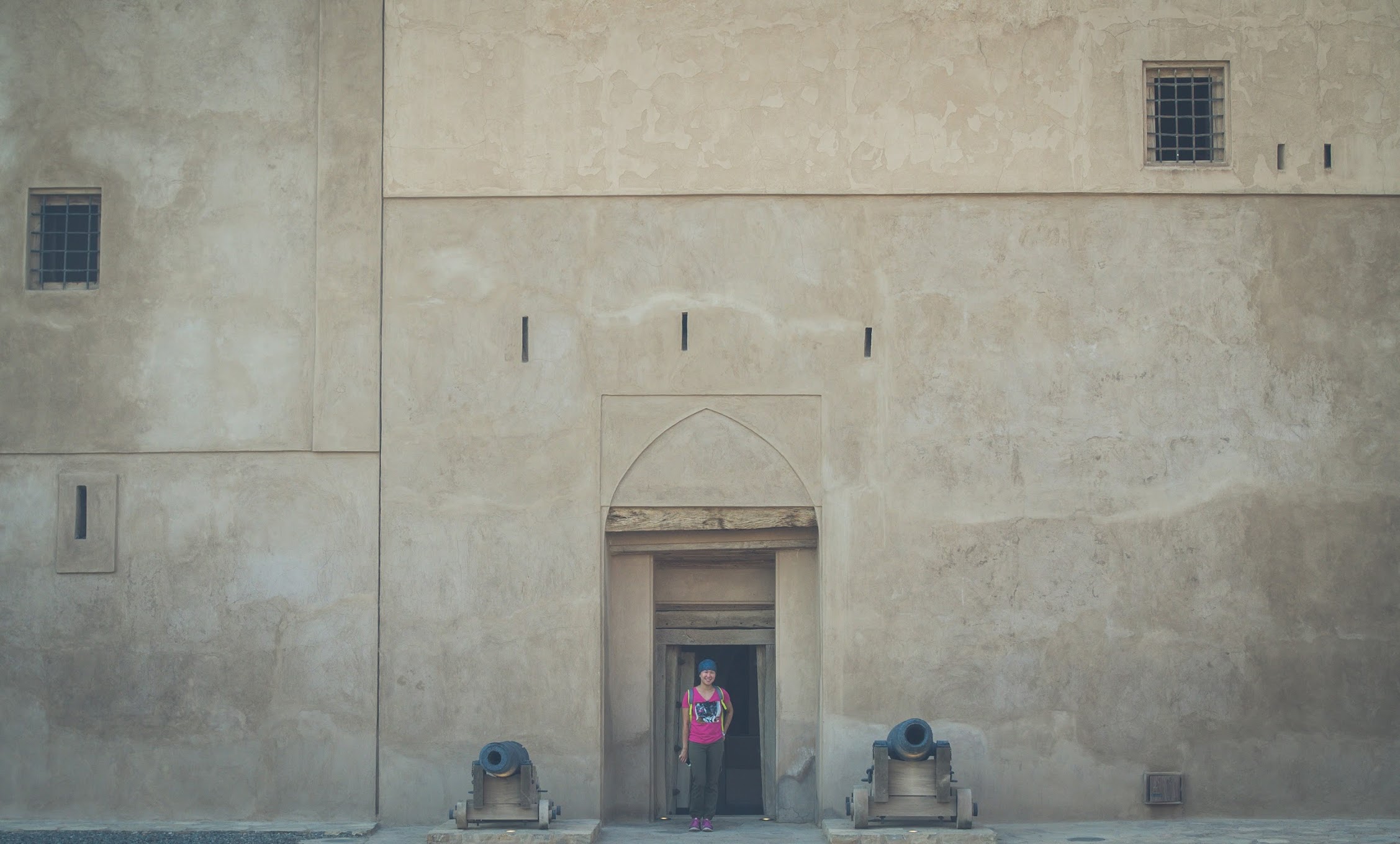 The Yaruba Dynasty hung on for the next few decades, before infighting, civil war, and foreign invasion rocked the kingdom in the first half of the 18th Century. Their successors, the house of Al Bu Said, came into power in 1744, and the Al Said family has ruled Oman ever since. All told, the Yaruba sultans reigned over the lands of the Omani tribes just shy of a century, and the height of their power may have only lasted for half of that, but it left a powerful legacy for Omani rulers to follow – one man uniting the interior tribes, one dynasty driving out the European colonisers, and one sultanate extending its military might up the Persian Gulf, along the west coast of the Indian Subcontinent, and the rich trade cities along the coast of East Africa. 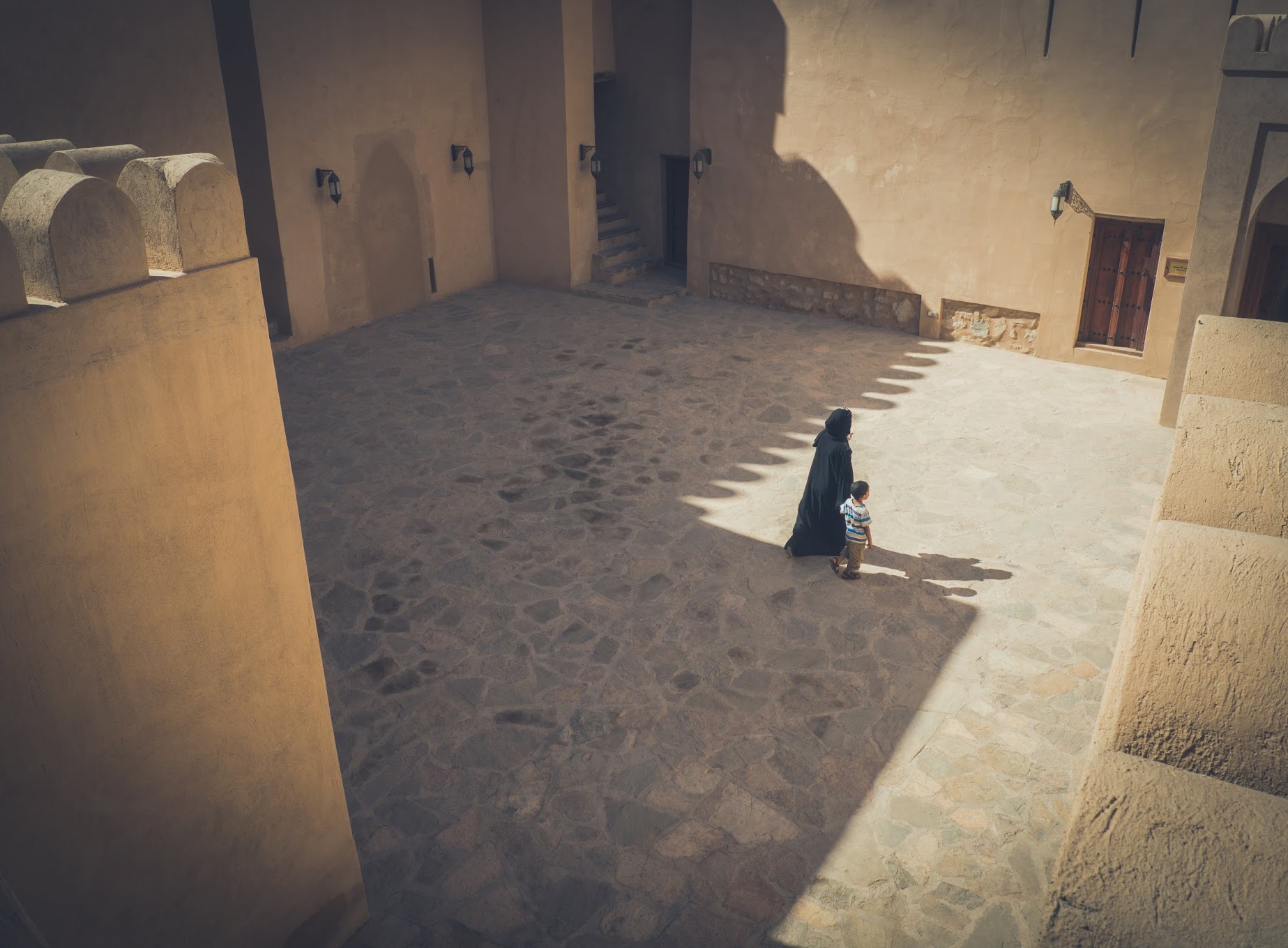