Within the Nizwa travel circuit, which includes the towns of Nizwa, Jabrin, and Misfat al Abriyeen, the two main mountain drives are Jebel Shams, the Mountain of the Sun, and Jebel Akhdar, the Green Mountain. Where Jebel Shams is all canyons and crags, windswept cliff-sides and harrowing drops into the misty depths, the road to Jebel Akhdar leads to the broad Sayq Plateau, a rocky landscape dotted with towns and villages, both settled and abandoned. Ashley and I didn’t do too much planning here – we looked at a few websites to get some ideas, but it was hard to imagine navigating the mountain without actually being there, and it was very much a play-it-by-ear kind of day.

One thing that we did take note of was the government-mandated requirement that all vehicles have 4WD capabilities in order to access the road up Jebel Akhdar. There’s a checkpoint at the base of the mountain where a government employee checks every vehicle, so sneaking through is not a likely scenario. As for whether or not it’s necessary – I’m not really sure. There are big red warning signs all along the highway, but, to be honest, it’s not that difficult of a drive, and the road is in excellent condition. We joined a convoy of SUVs heading up into the hills, and it took us around 45 minutes to reach the village of Sayh Qatanah.

From there, it took us way too long to find Princess Diana’s Point, the location where Princess Diana took in the views of the villages and terraced hillsides across the gorge when she visited Oman in 1986. To save any further confusion, the viewpoint is inside the Anantara Al Jabal Al Akhdar Resort, a luxurious hotel complex that is both stunning and jarringly out of place. They allowed us to drive in and park in the walled parking lot, and then, having made our way to the front entrance in our dusty hiking outfits, we were met by the head of security, who escorted us through the grounds and onto the viewing platform. Considering how long it took us to find the place, I don’t know if I can say that the view was worth it. Also, it doesn’t seem like anybody actually knows the true location of Princess Diana’s Point – somebody just decided this was it.

To get a much better view of the gorge, we drove five minutes down the street to the village of Al Aqur, the starting point of a hiking trail that winds through the surrounding villages and terraces. The route is marked by the occasional yellow, white, and red marker painted onto walls, rocks, and any other available surface, though there were times when we wandered in circles because we weren’t able to find the next trail sign. The villages along the way are also very much inhabited, so there’s that to be mindful of as well. Ashley and I hiked this trail for a couple of hours in the late afternoon before getting back to our car and driving on further into the Sayq Plateau. 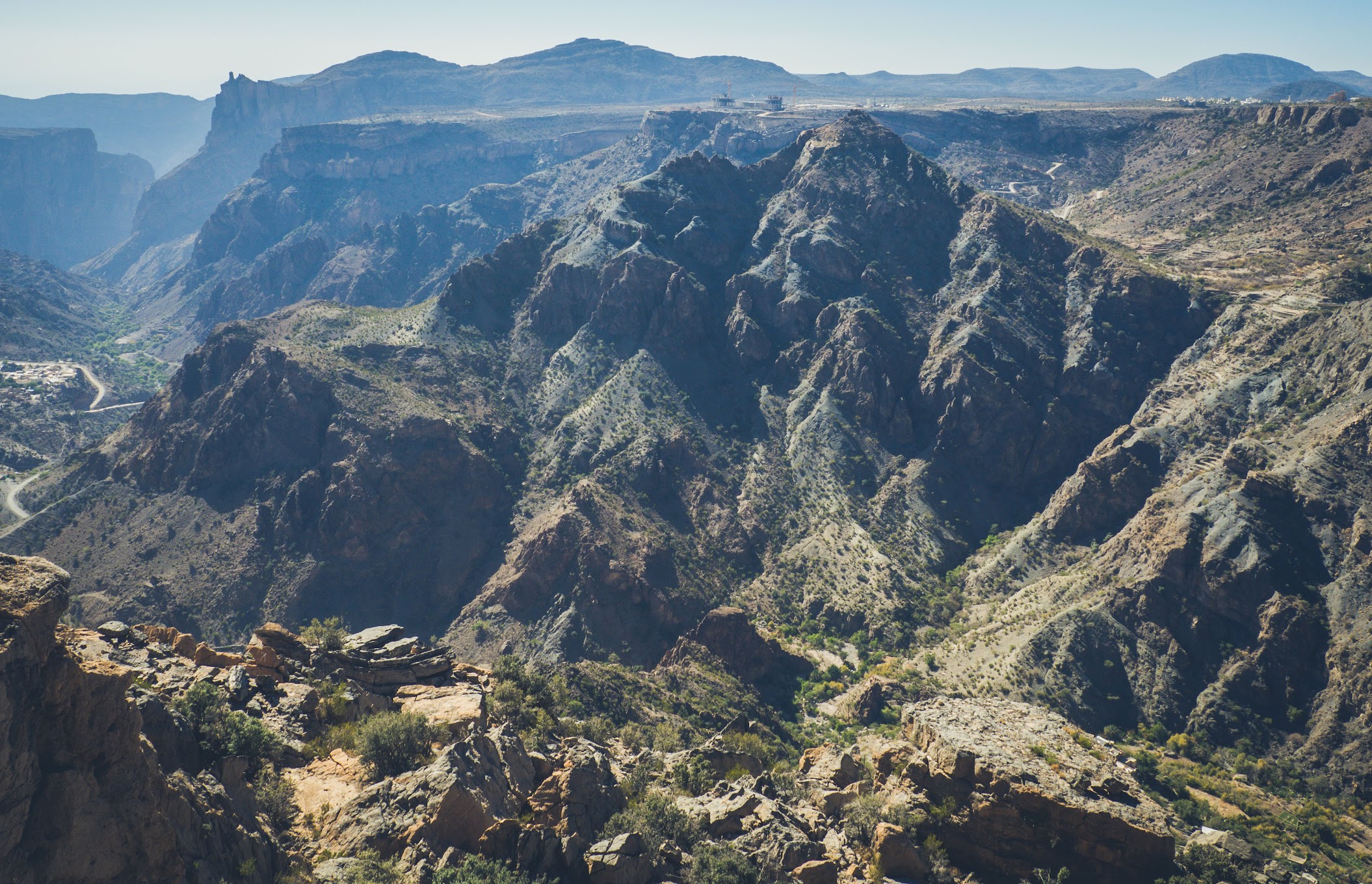 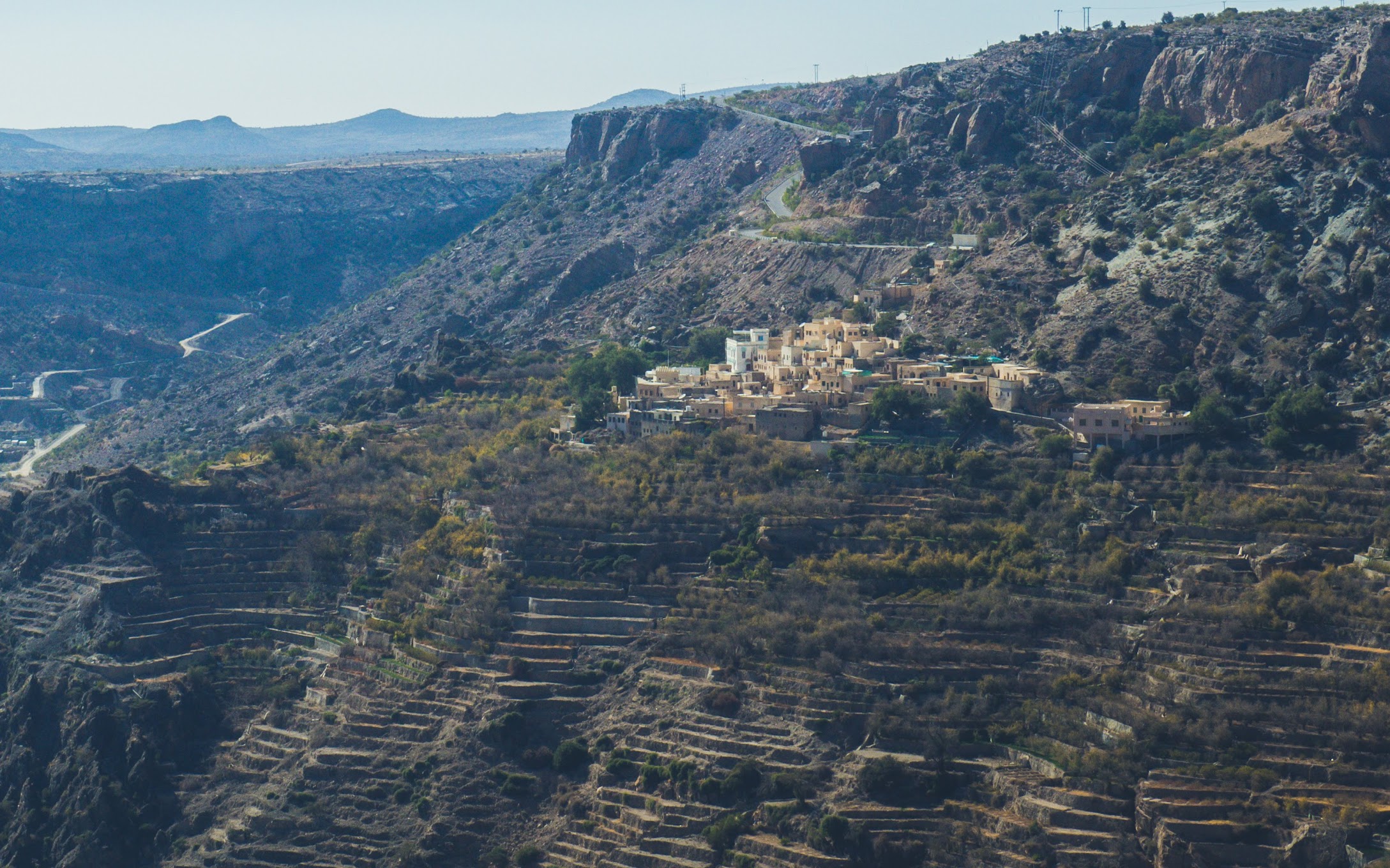 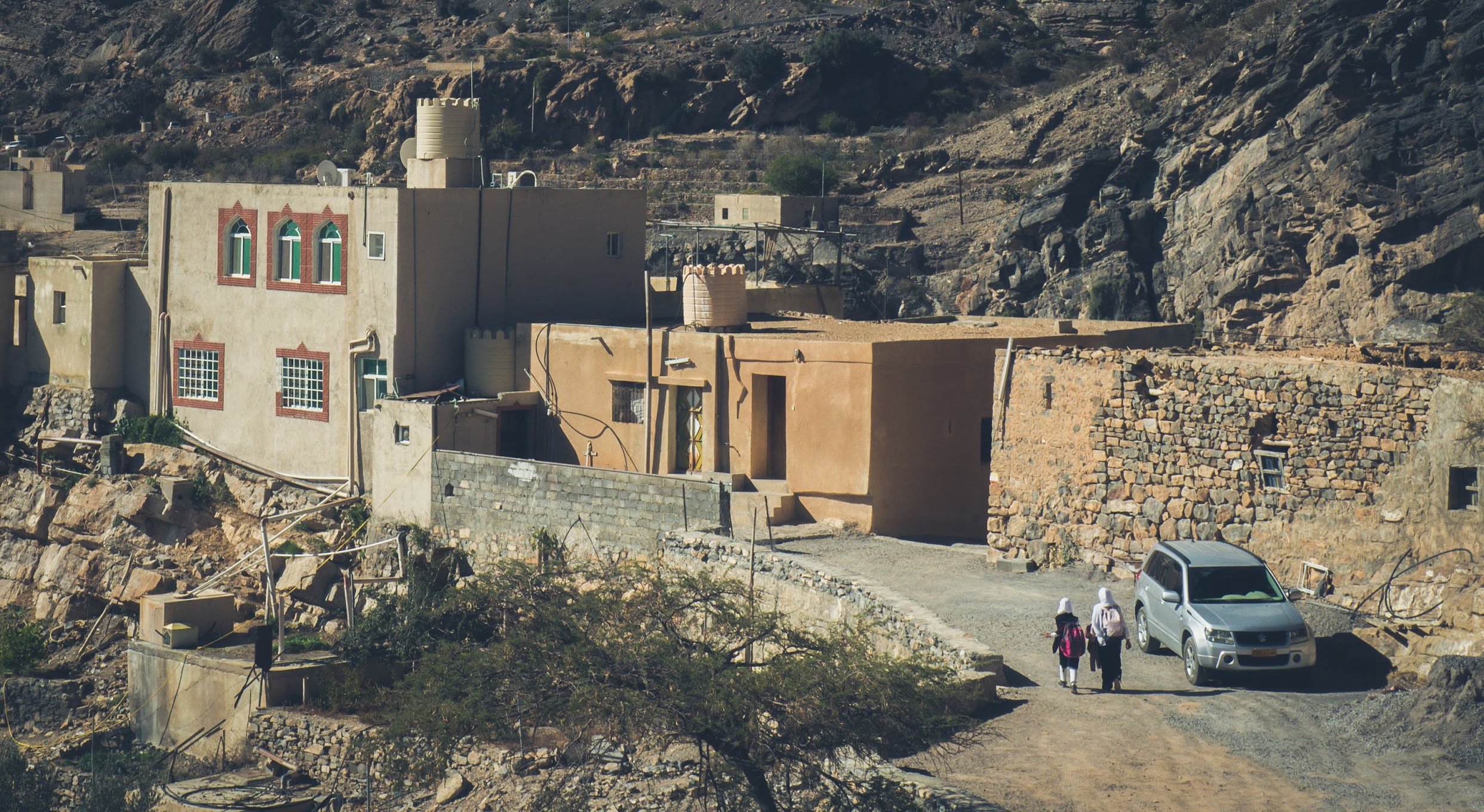 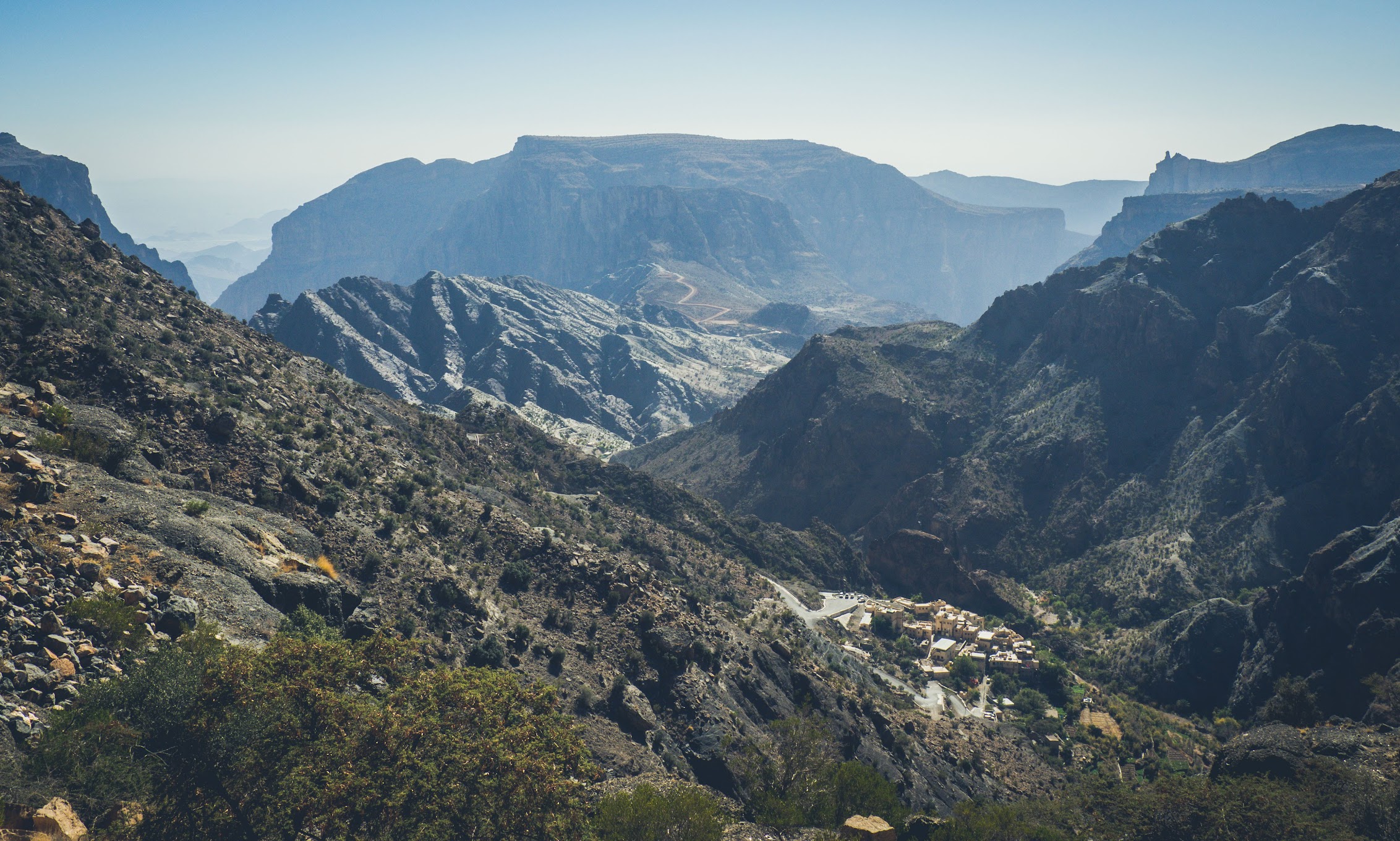 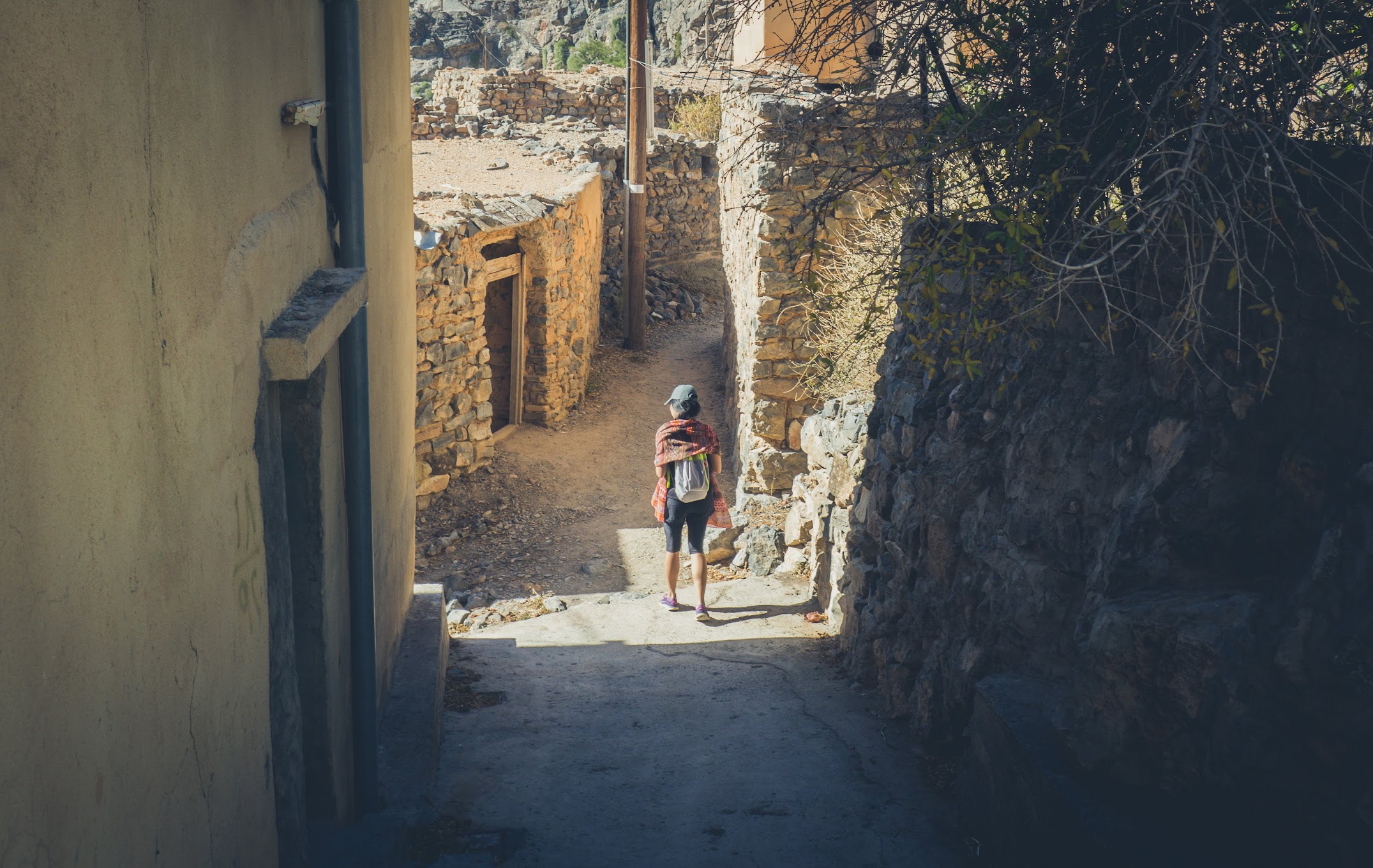 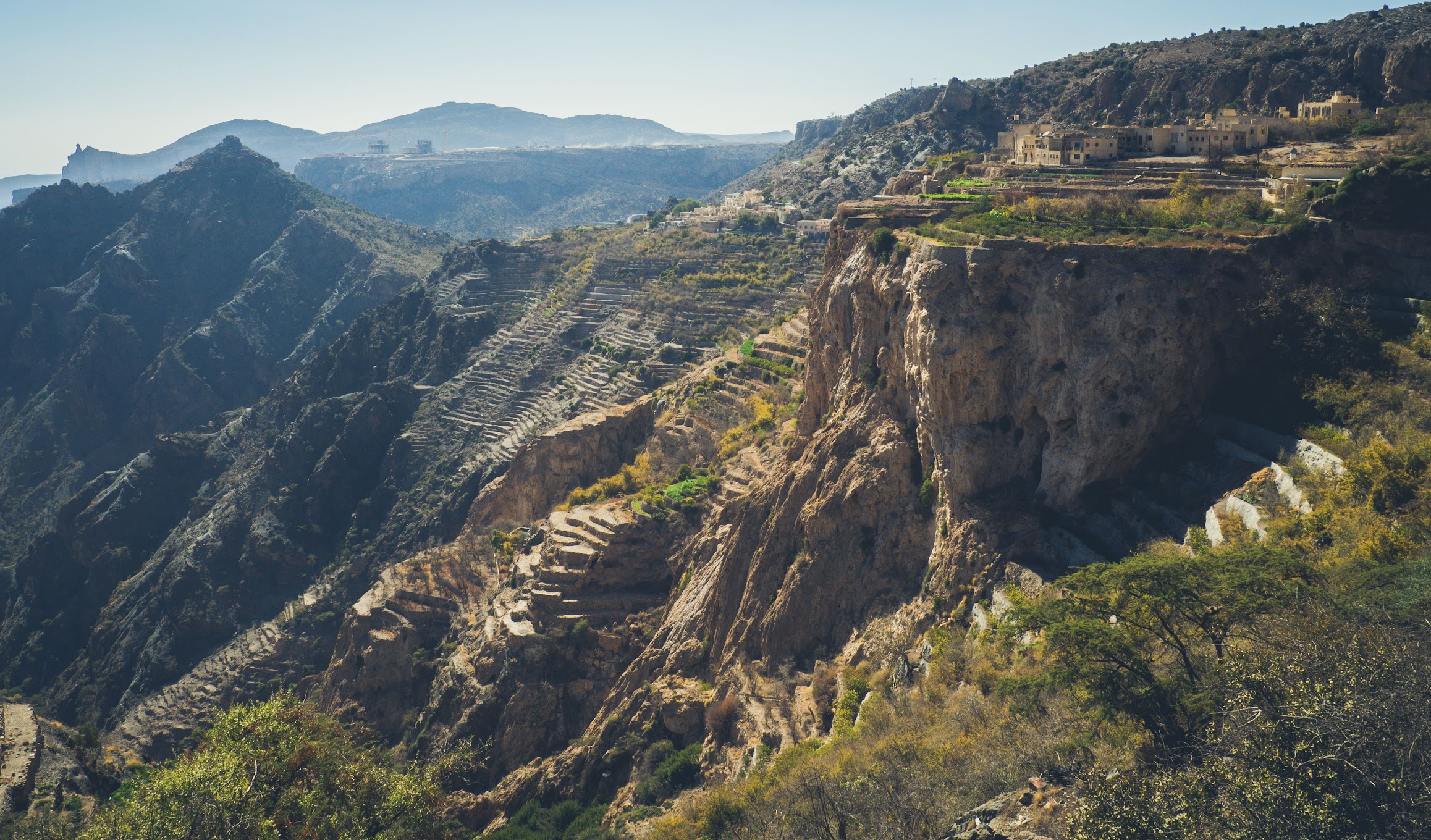 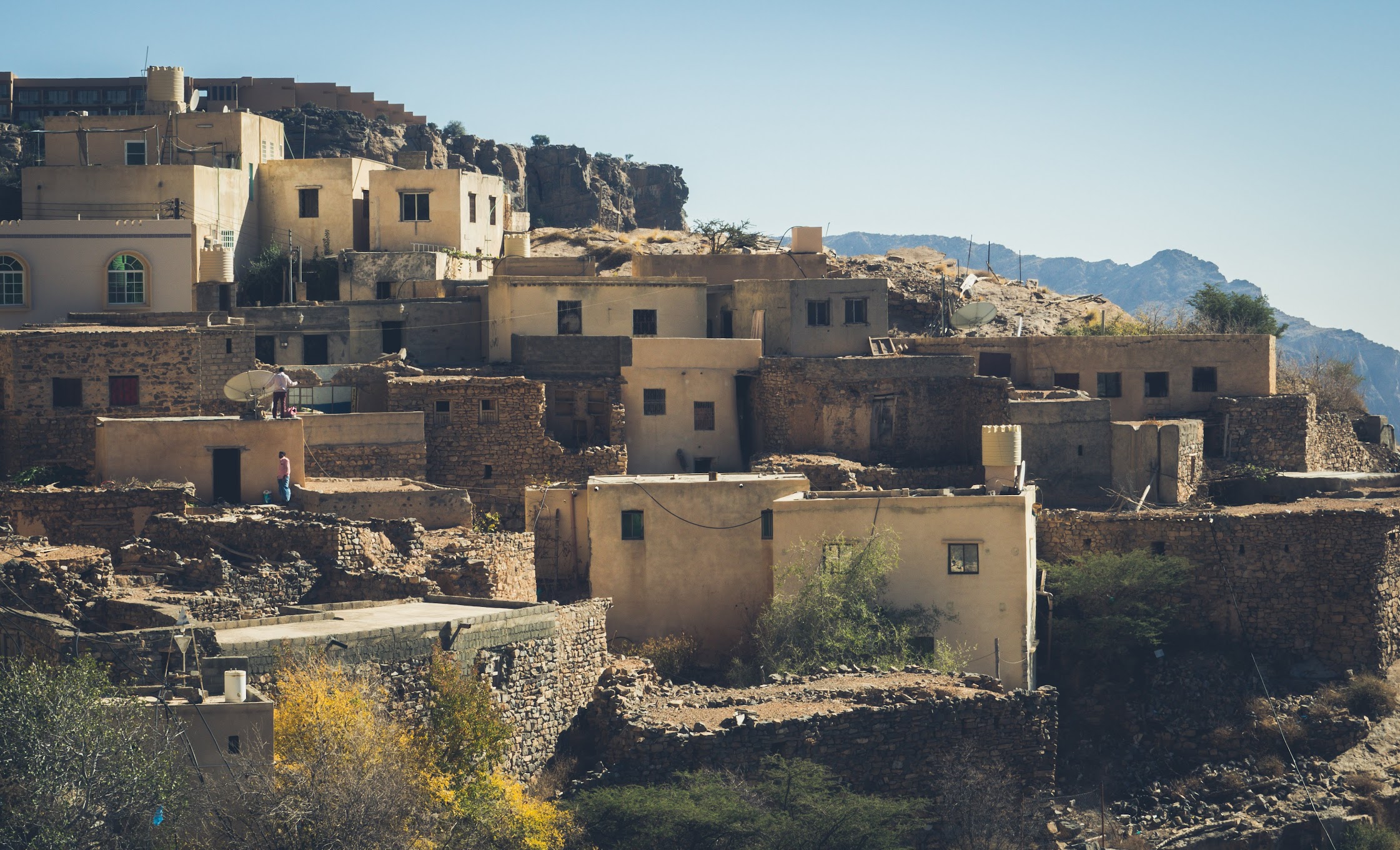 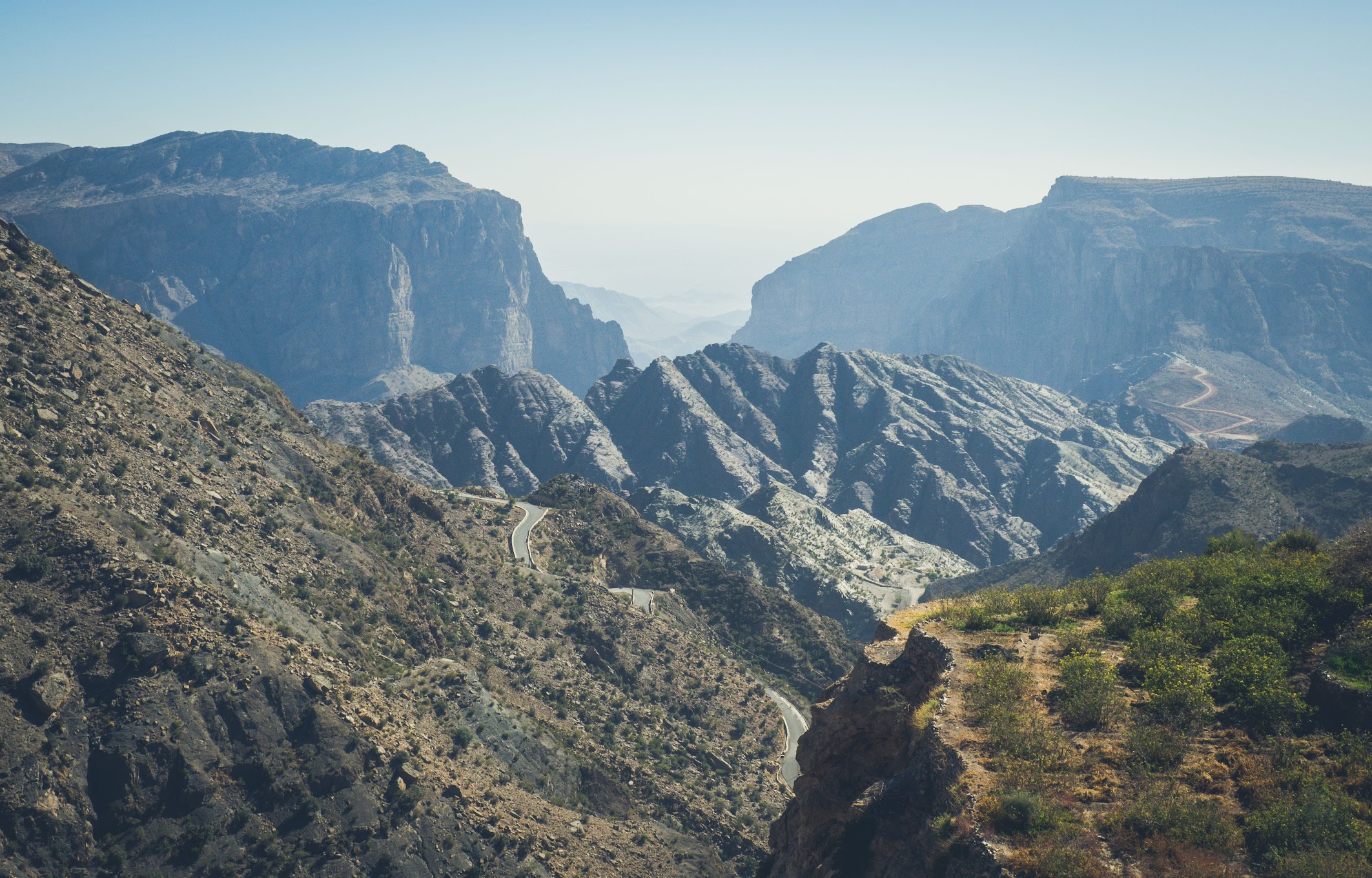 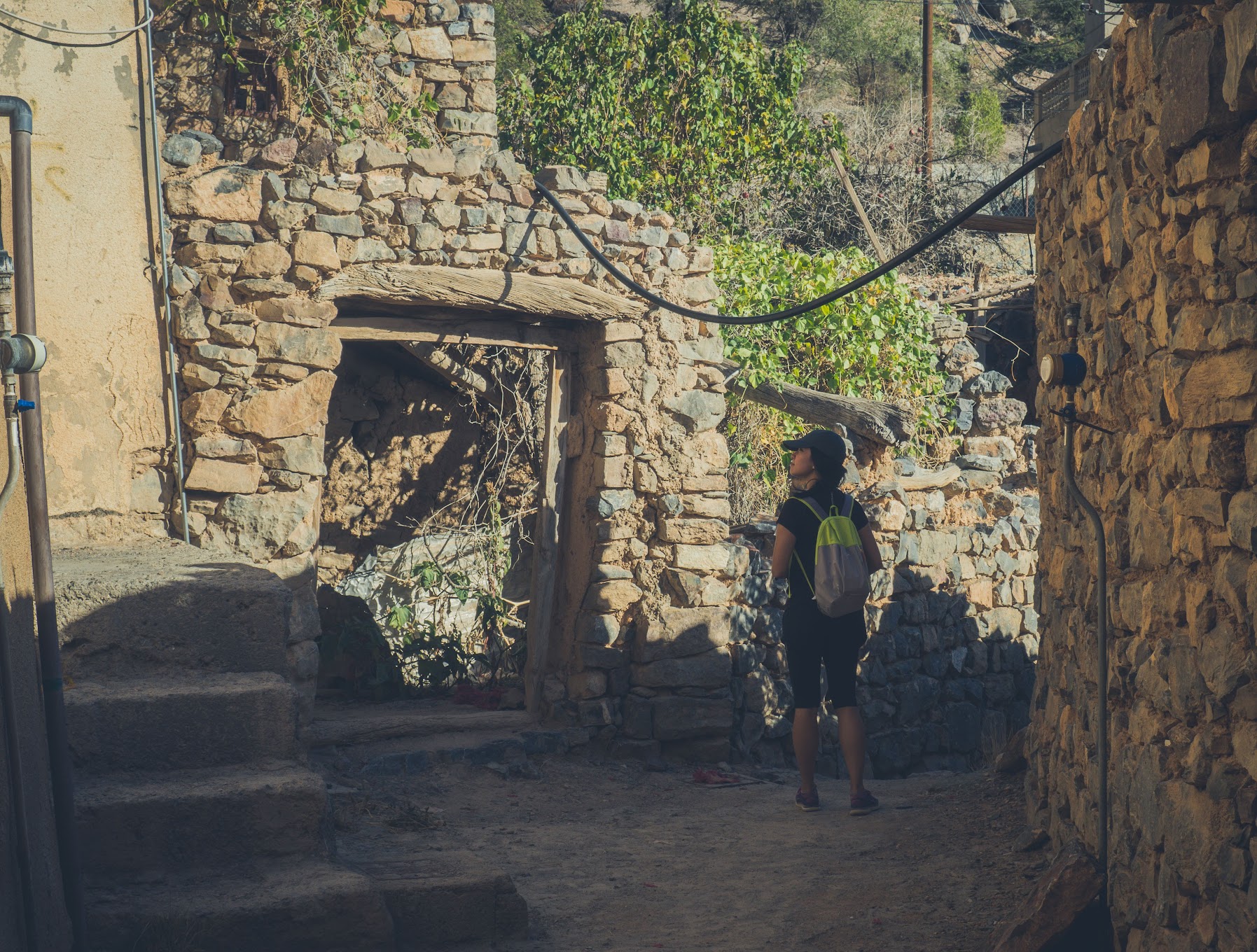 The sun was getting low by the time we reached our final destination at Jebel Akhdar: the abandoned village of Wadi Bani Habib, located at the end of this particular section of road that began back at the village of Sayh Qatanah. The parking lot is located across from the wadi, and the view of the dead village on the opposite hillside in the dying hours of the day was something else. We heard another group of tourists walking around the village when we started hiking down into the valley, but by the time we were climbing the stairs up the other side, they were on their way out. Incredibly, we had the village all to ourselves, and this kind of thing is very much Ashley’s jam. I mostly stayed around the more solid-looking areas of the village, while she climbed and clambered into hidden nooks and crannies, exploring the upper levels of the crumbling structures while I prayed silently on the ground floor.

With the sun already behind the hills, though, we didn’t stay too much longer. Wadi Bani Habib is such an interesting place, and I would have liked to have had a little more time there, but I really didn’t want to get stuck in the village when it got dark – it was already a bit creepy in the dusk lighting. So after Ashley came back from wherever she ran off to, we quickly hiked back up to the parking lot. Within the hour, we were back on level ground, chasing the sunset back to our hotel in Nizwa. 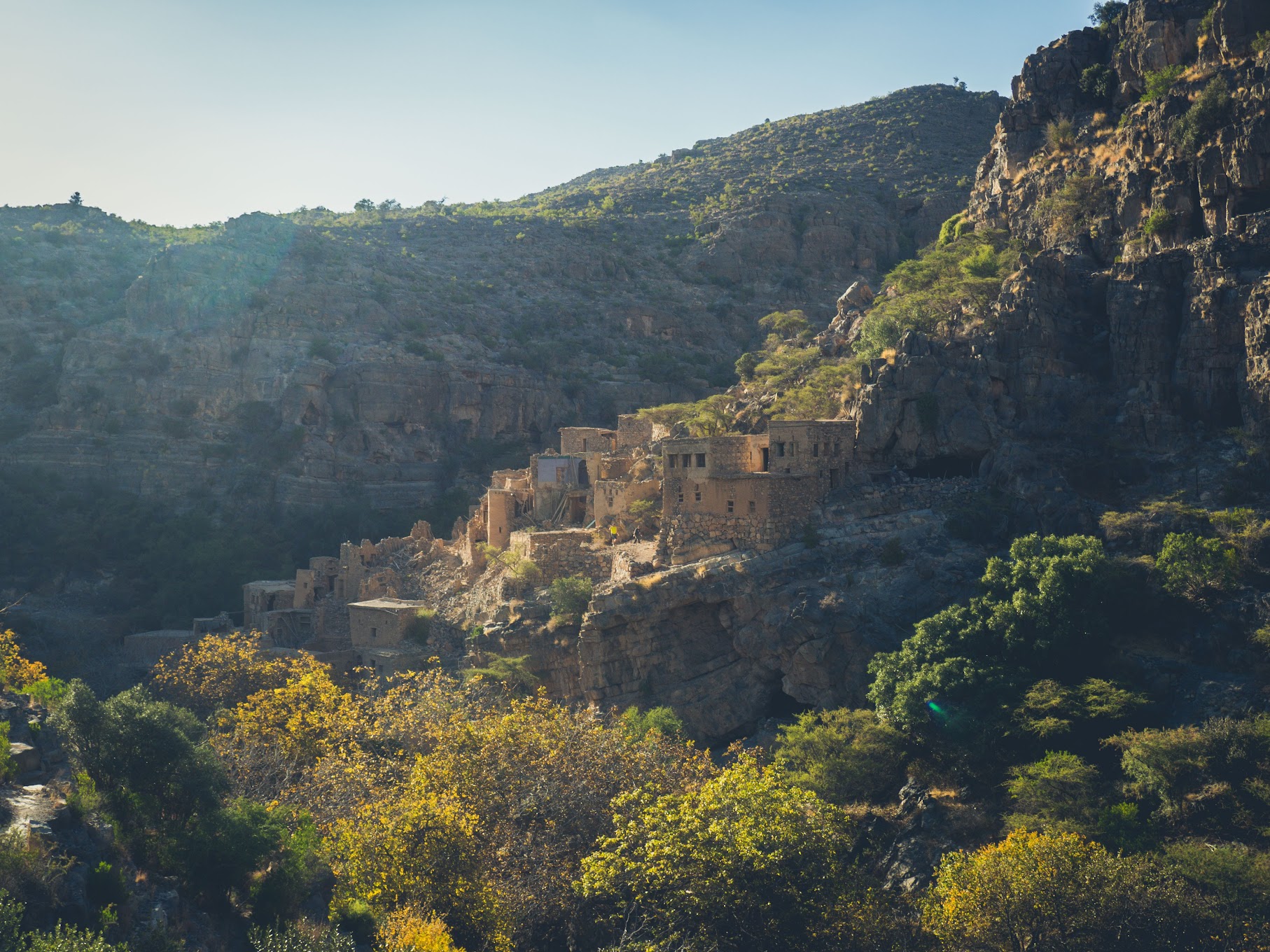 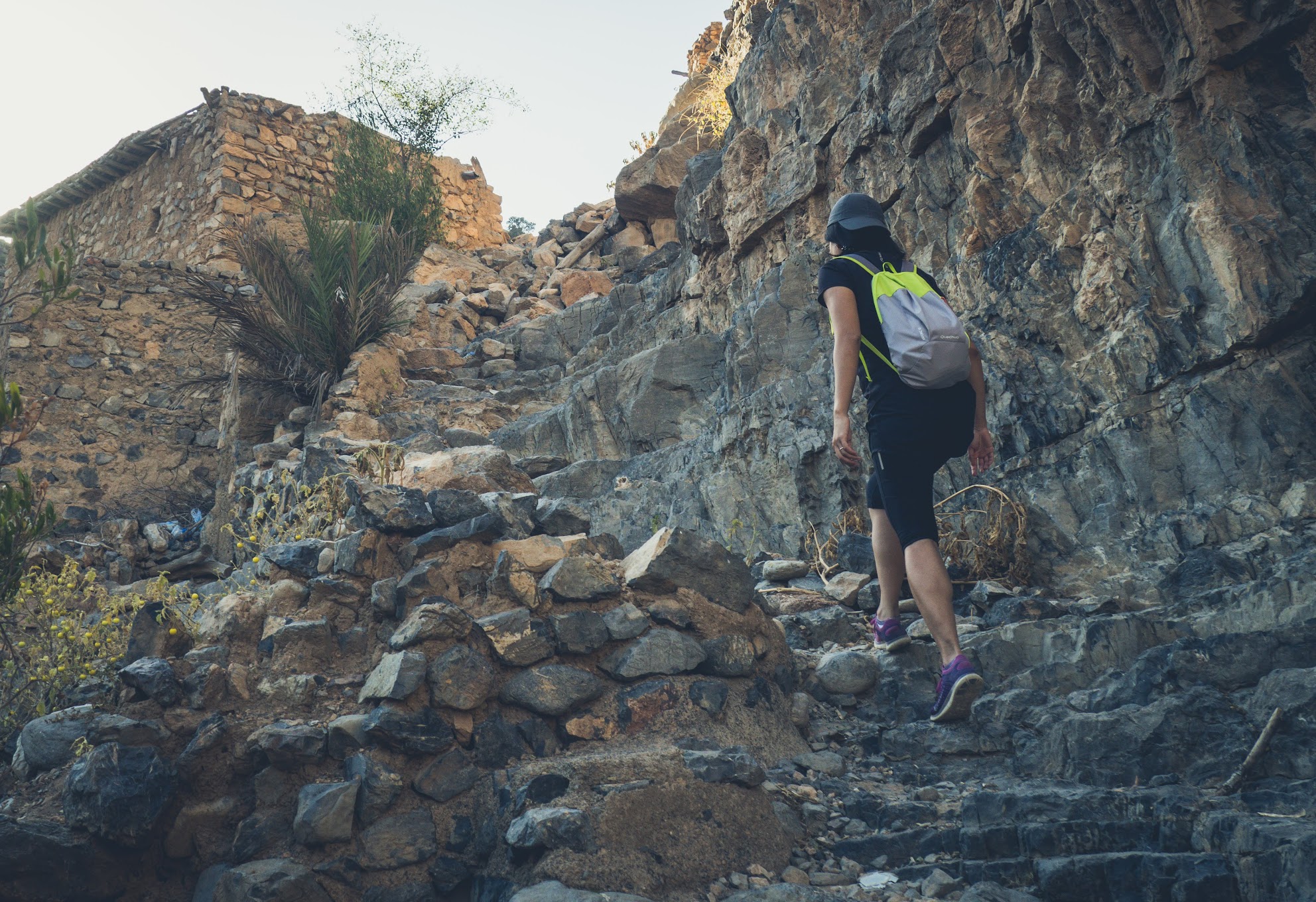 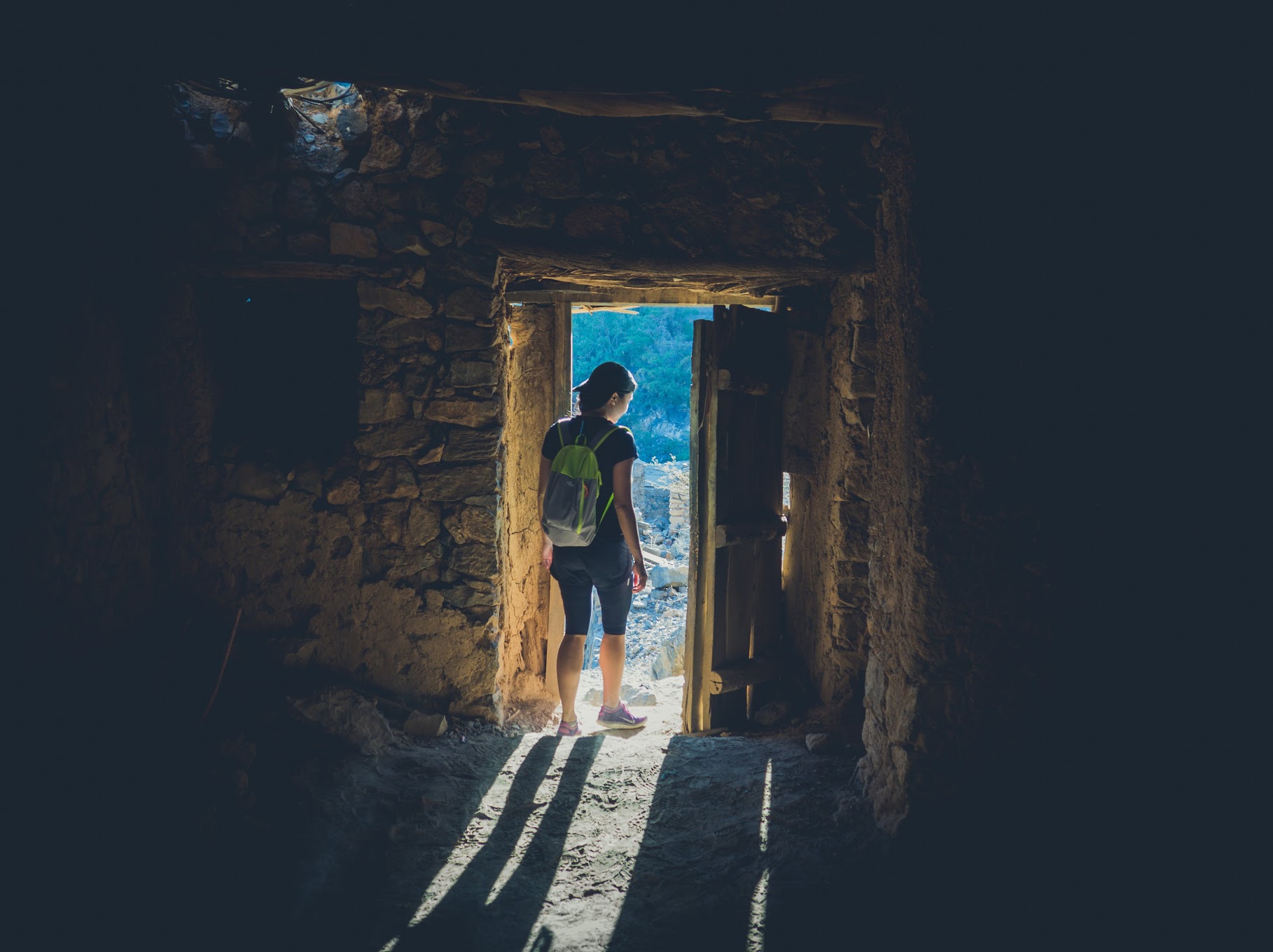 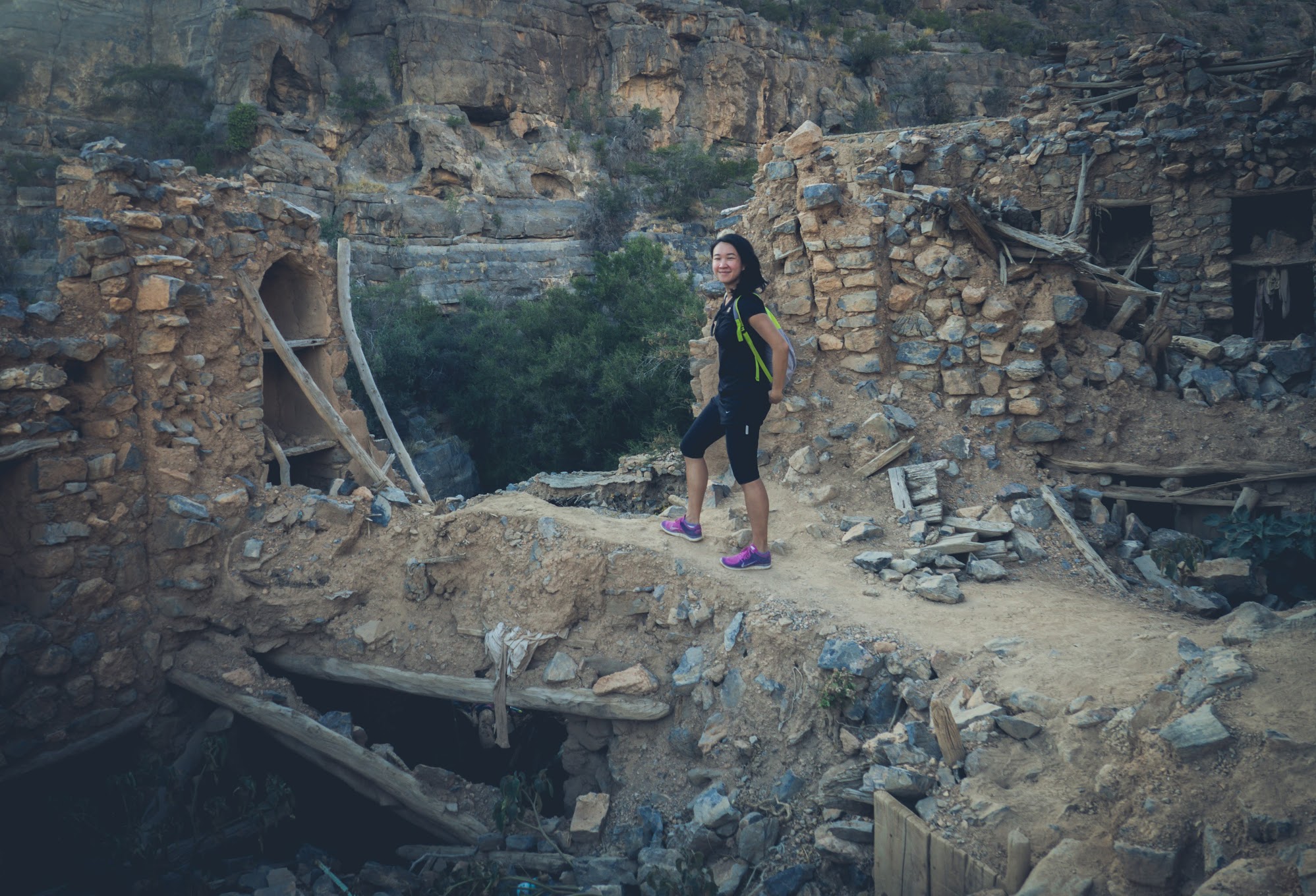 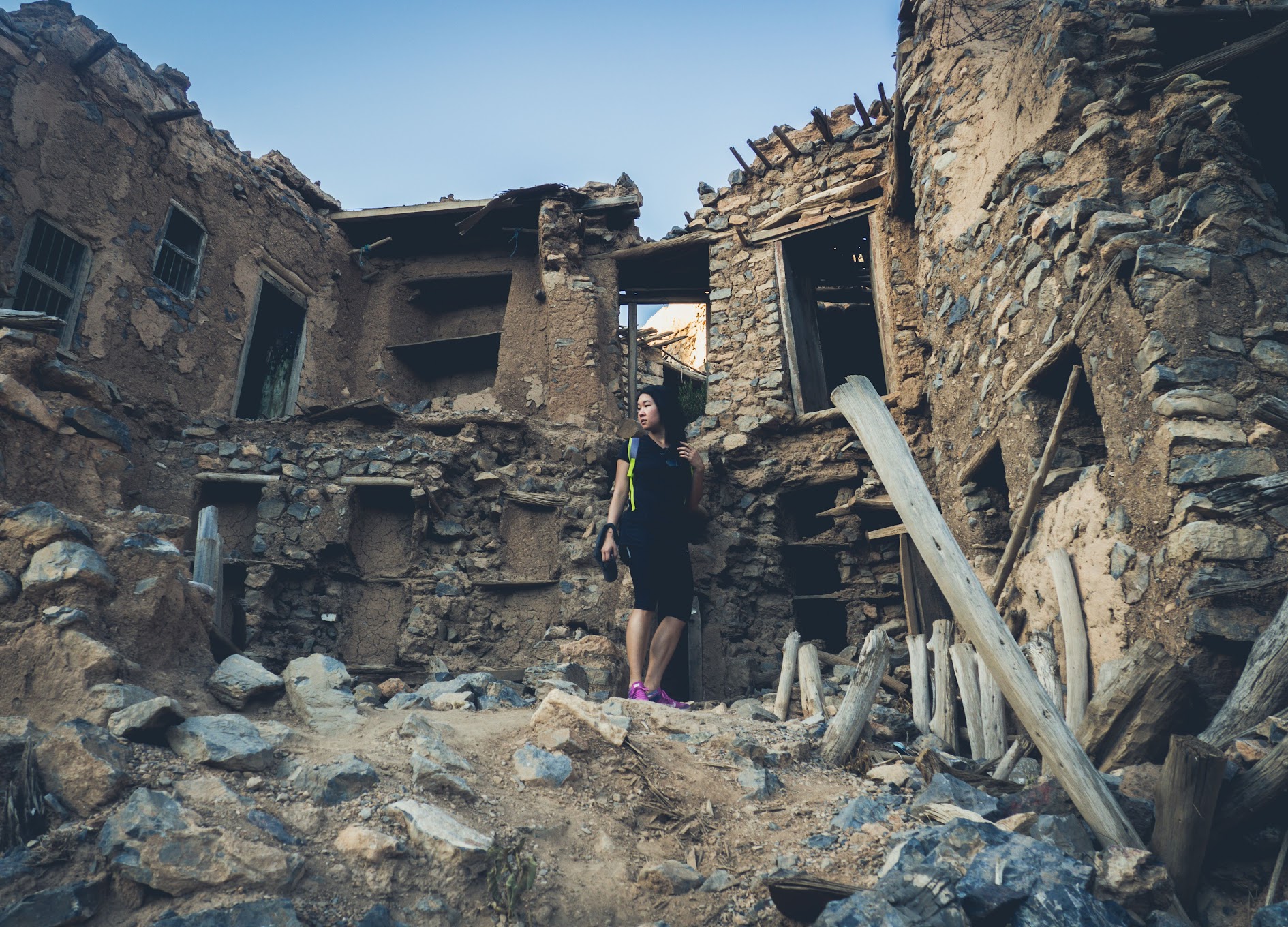 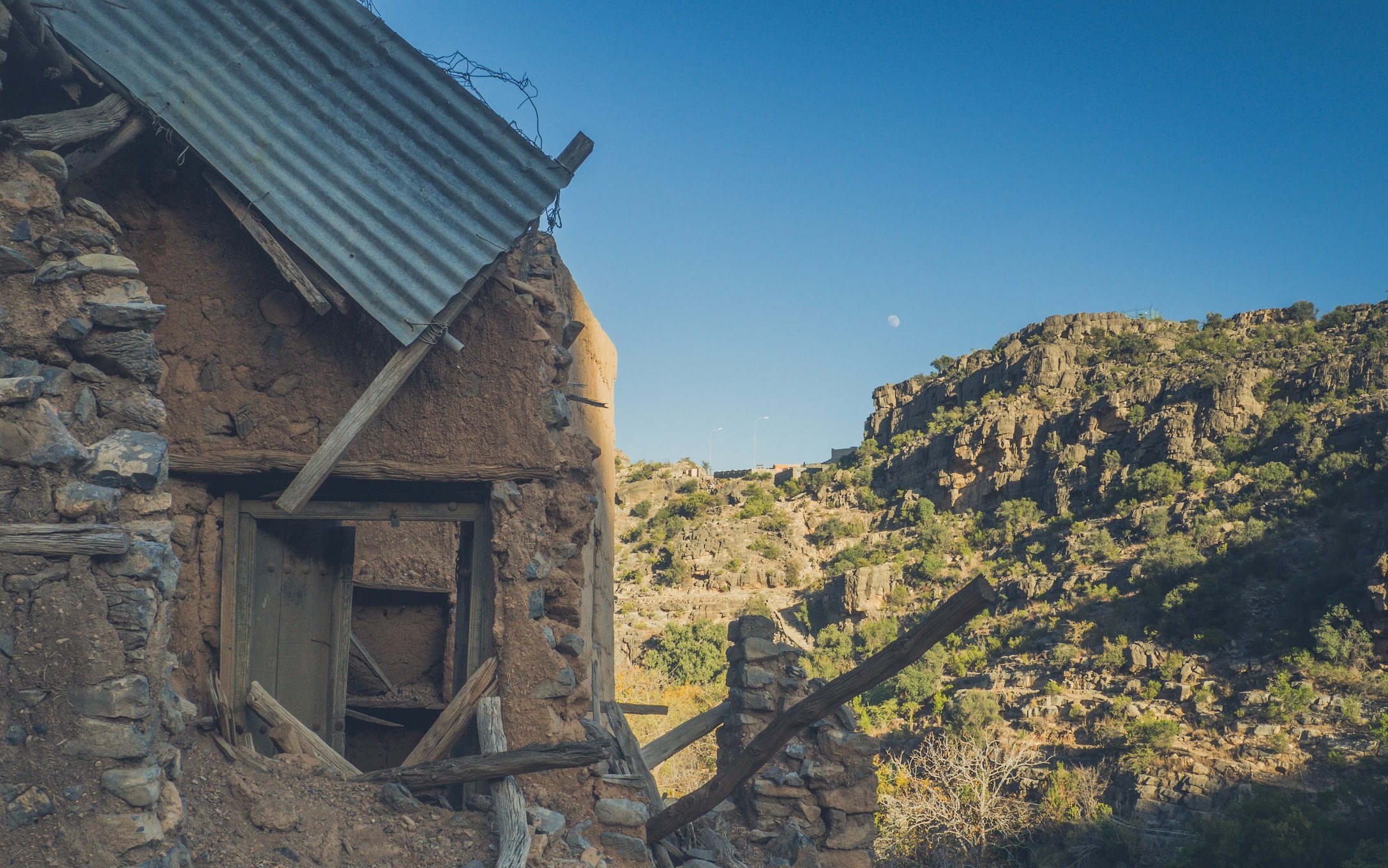 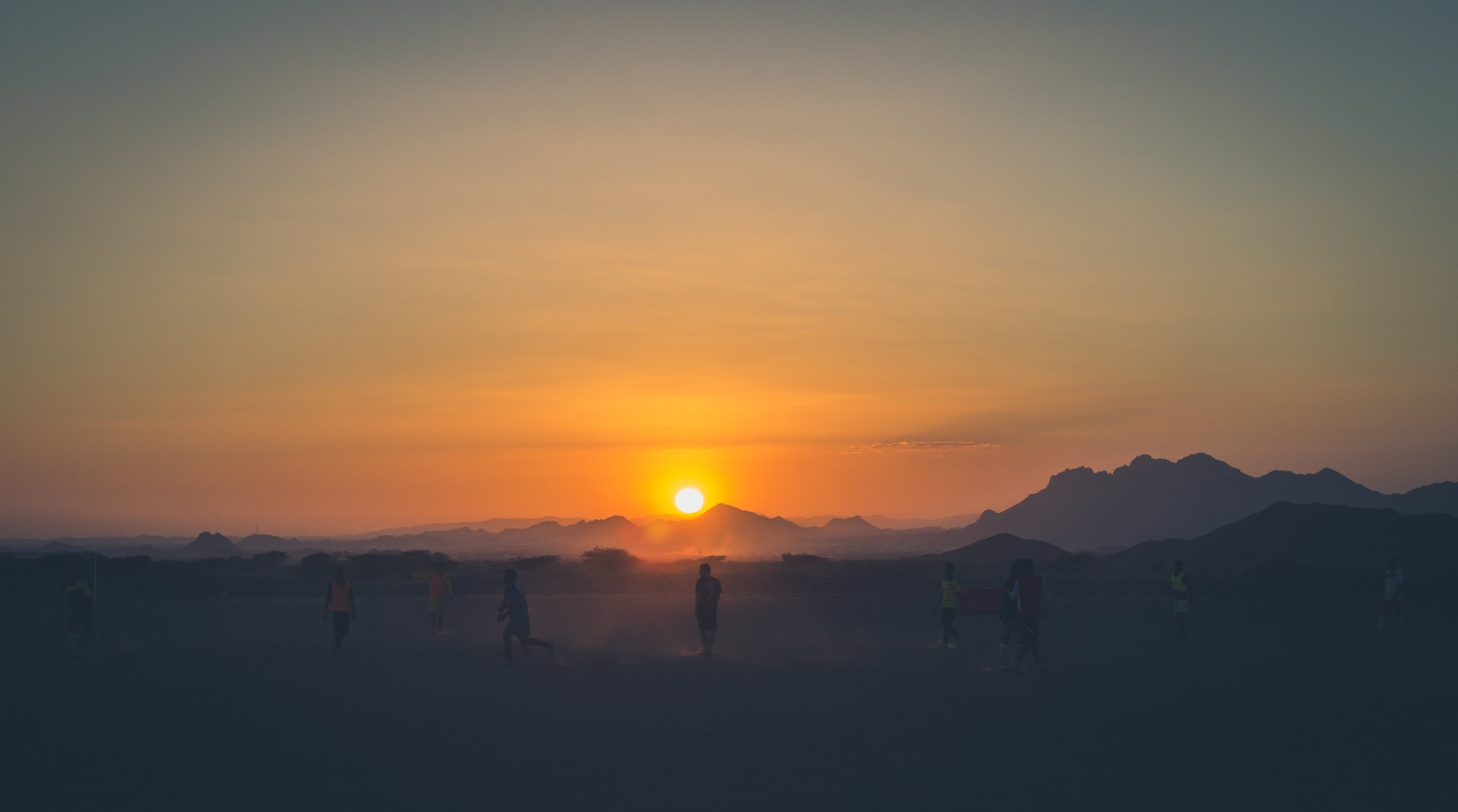 As we were driving back to Nizwa, we had one of those magical moments where something beautiful happens and you’re just happy to have someone to share it with – stargazing in Sri Lanka, sunsets in Istanbul, otherworldly landscapes in Iceland, to name a few examples from our past travels. This one was right up there with the best of them: the golden yolk of the setting sun, nestling into the curve of a distant mountain range, while a local soccer team churned up golden clouds of dust in the foreground. In an instant, we were pulling off onto the side of the road and wandering in closer with cameras and hearts in hand, soaking in the warm tranquility of the scene. We must have stuck around for at least 20 minutes, watching the sun sink further and further behind the horizon, as the game moved back and forth across the field. And then, it was gone, and we were back in our car, gushing about what we had just witnessed and filled with gratitude for what the day had provided. 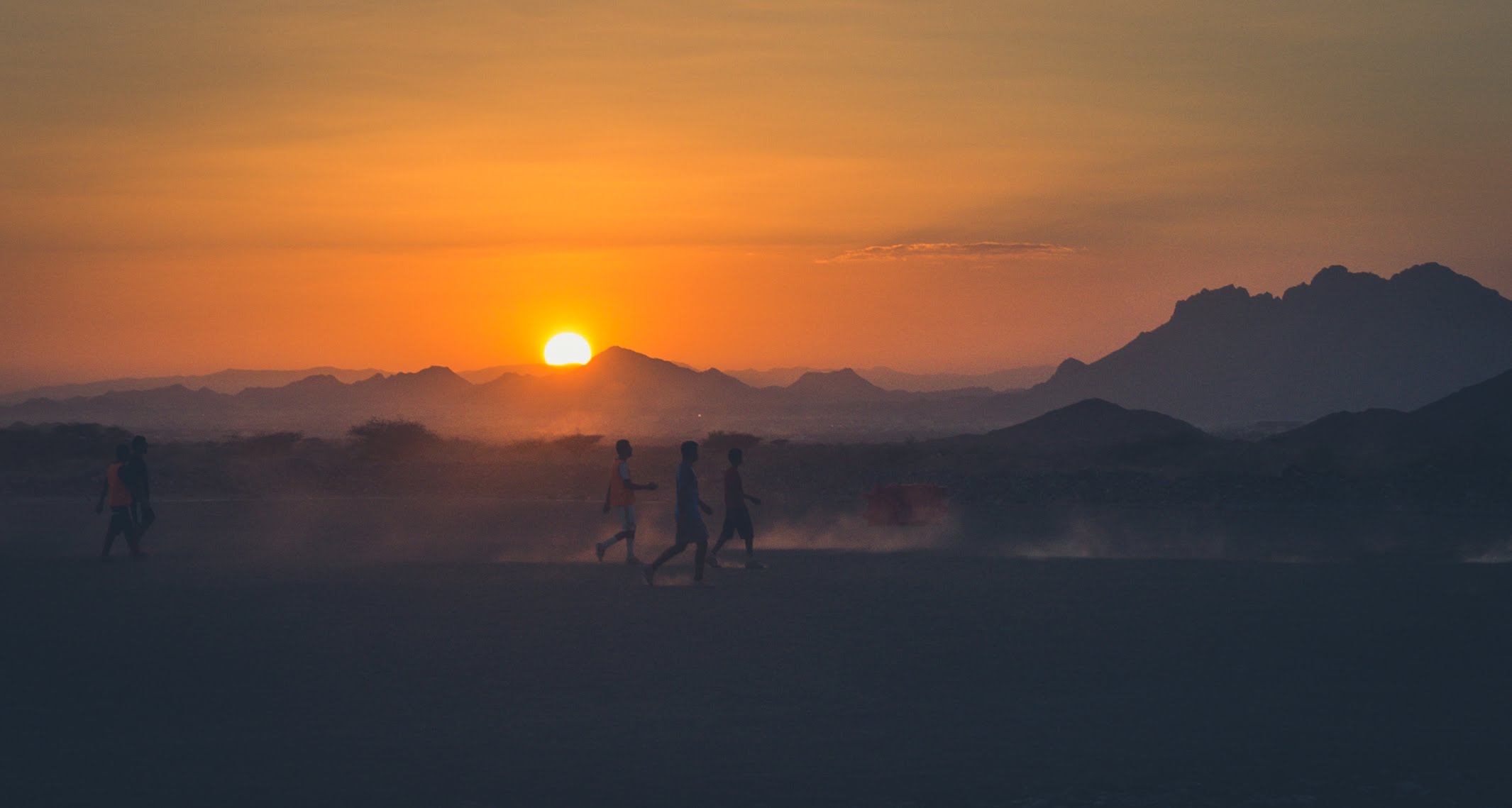