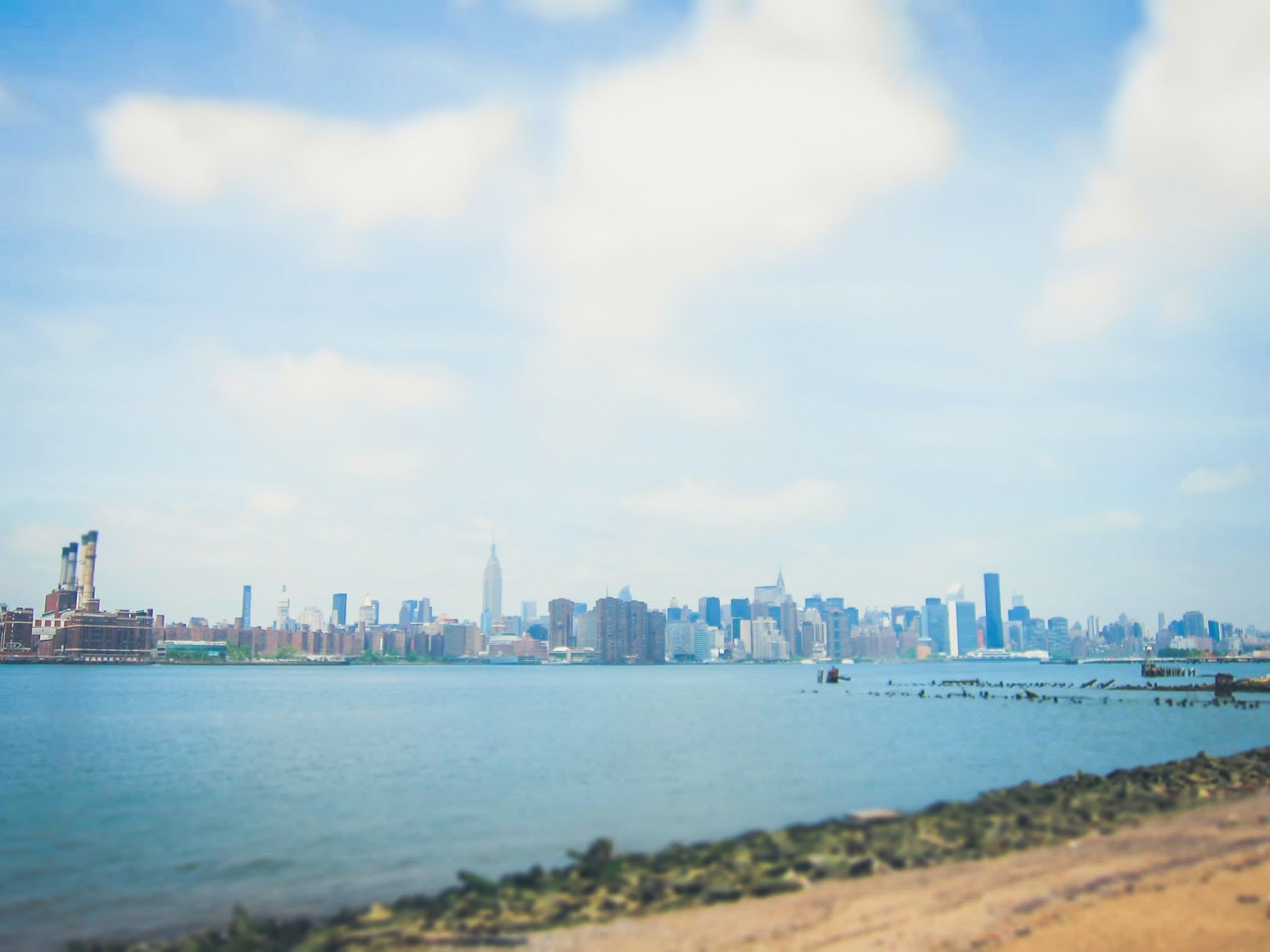 On May 1st, after months of planning, fretting, and prayer, I proposed to Ashley at her family’s apartment in Happy Valley.  Two weeks later, we were on a flight to Newark to kick start our two-and-a-half week holiday on the Eastern Seaboard.  At the time, both of us had jobs that allowed us to work from home, so we took advantage of the flexibility to stretch out our vacation time abroad.  Our first stop was New York, where Ashley’s best friend, Sunny, who was in Seoul with us the previous fall, was now living and working.  Julie and Michelle, the remaining two members of their friendship quartet from their days together in Boston, would also be joining us in the Big Apple – a rare reunion for the four of them since Ashley’s move to Hong Kong in late 2009.  The reason for coming to New York in the first place was to attend my friend Angela’s wedding in Queens, so I was looking forward to a little reunion of my own. 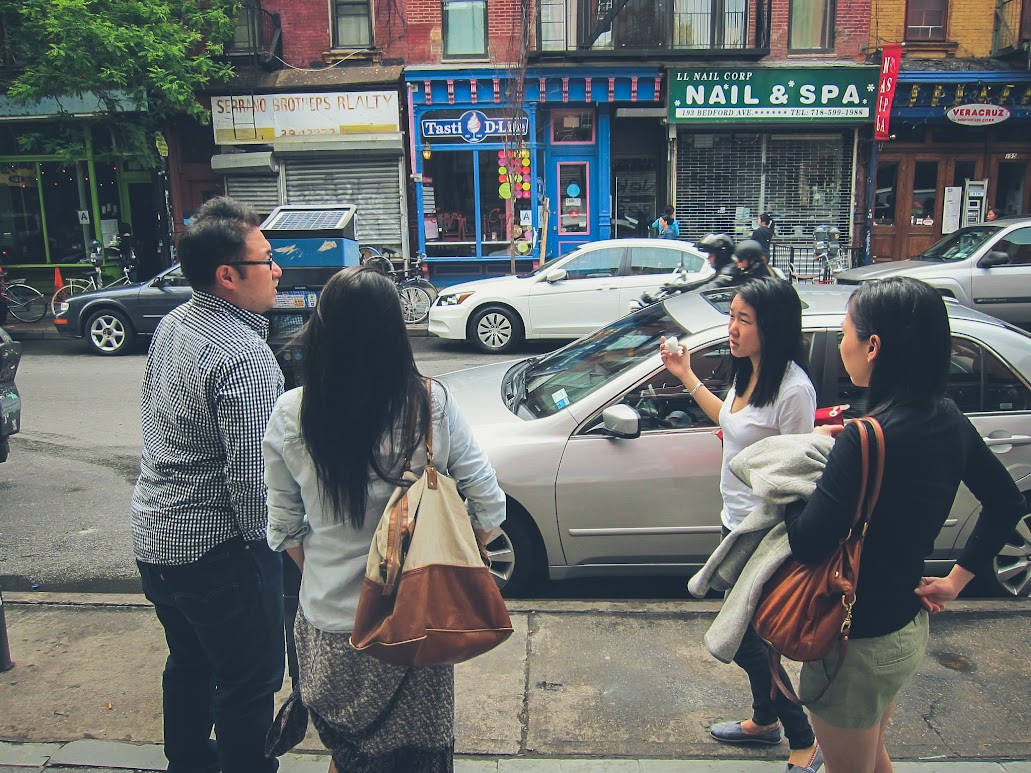 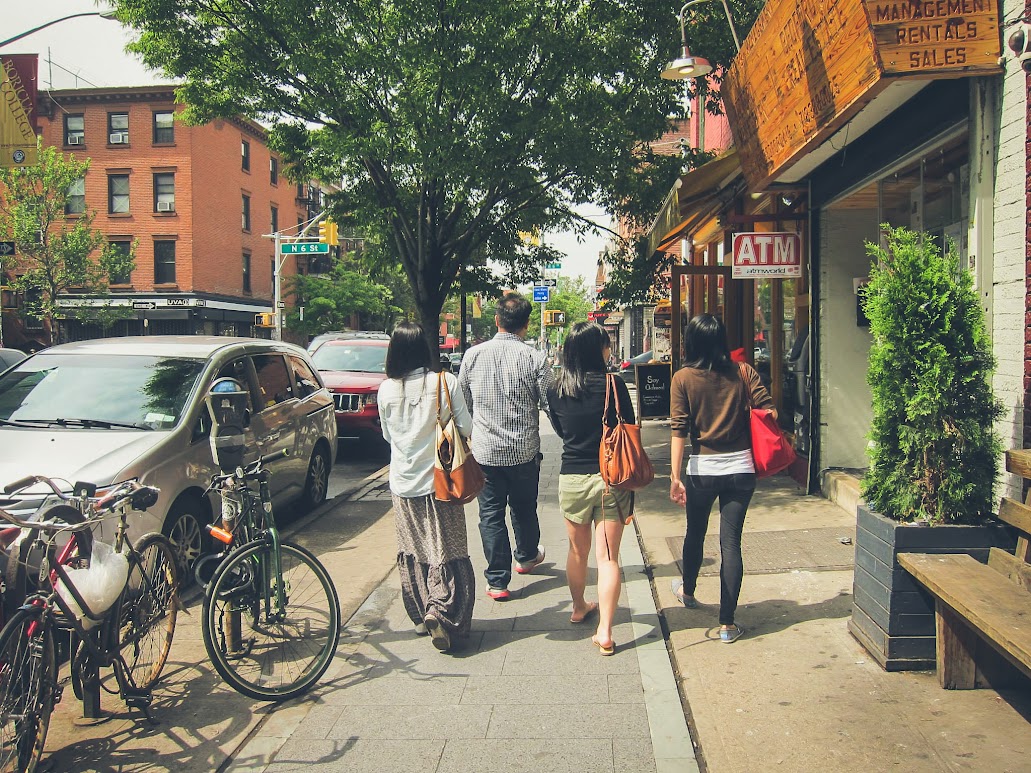 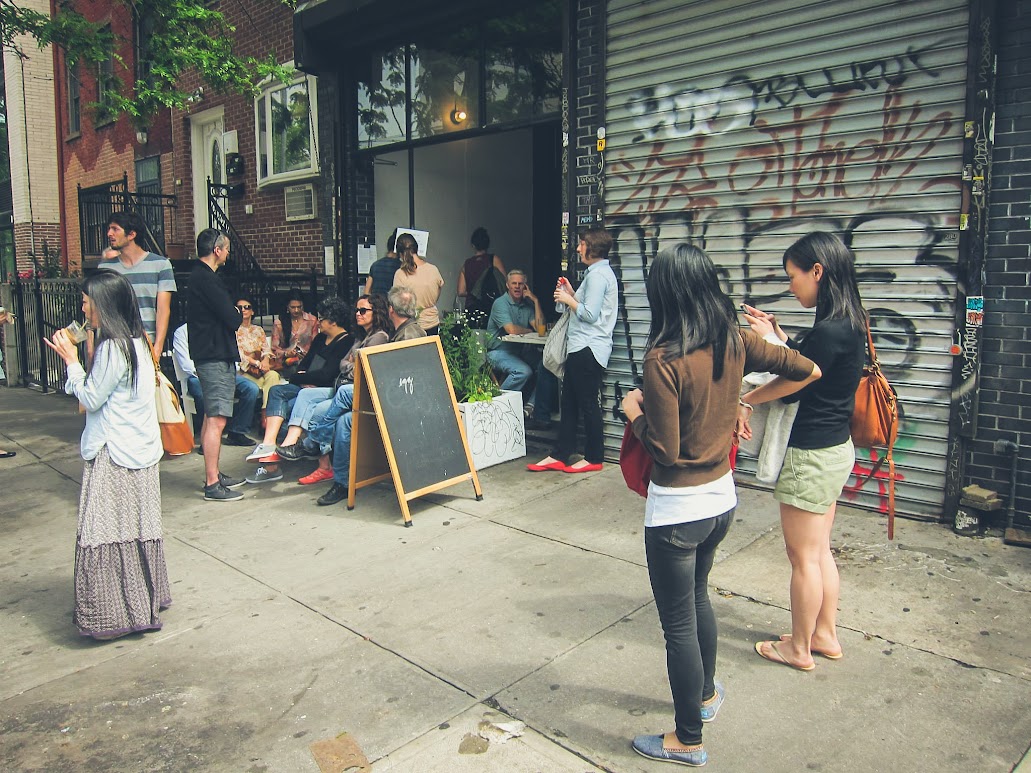 In all my years of living in Canada, the closest I ever got to New York was a brief stopover on one of those cheap Chinese bus tours.  I was too young to have any sort of impression of my surroundings, and I don’t consider that to be a proper New York City holiday.  By the time I was old enough to have travel yearnings of my own, there was no room left in my imagination for a place so close to home.  My eyes were set on the sweeping vistas and unfamiliar cities of the old world – North America seemed positively mundane by comparison.  It took me moving halfway around the world to reboot my imagining of the familiar, and, after all, everybody needs to see The City That Never Sleeps at least once in their lifetime. 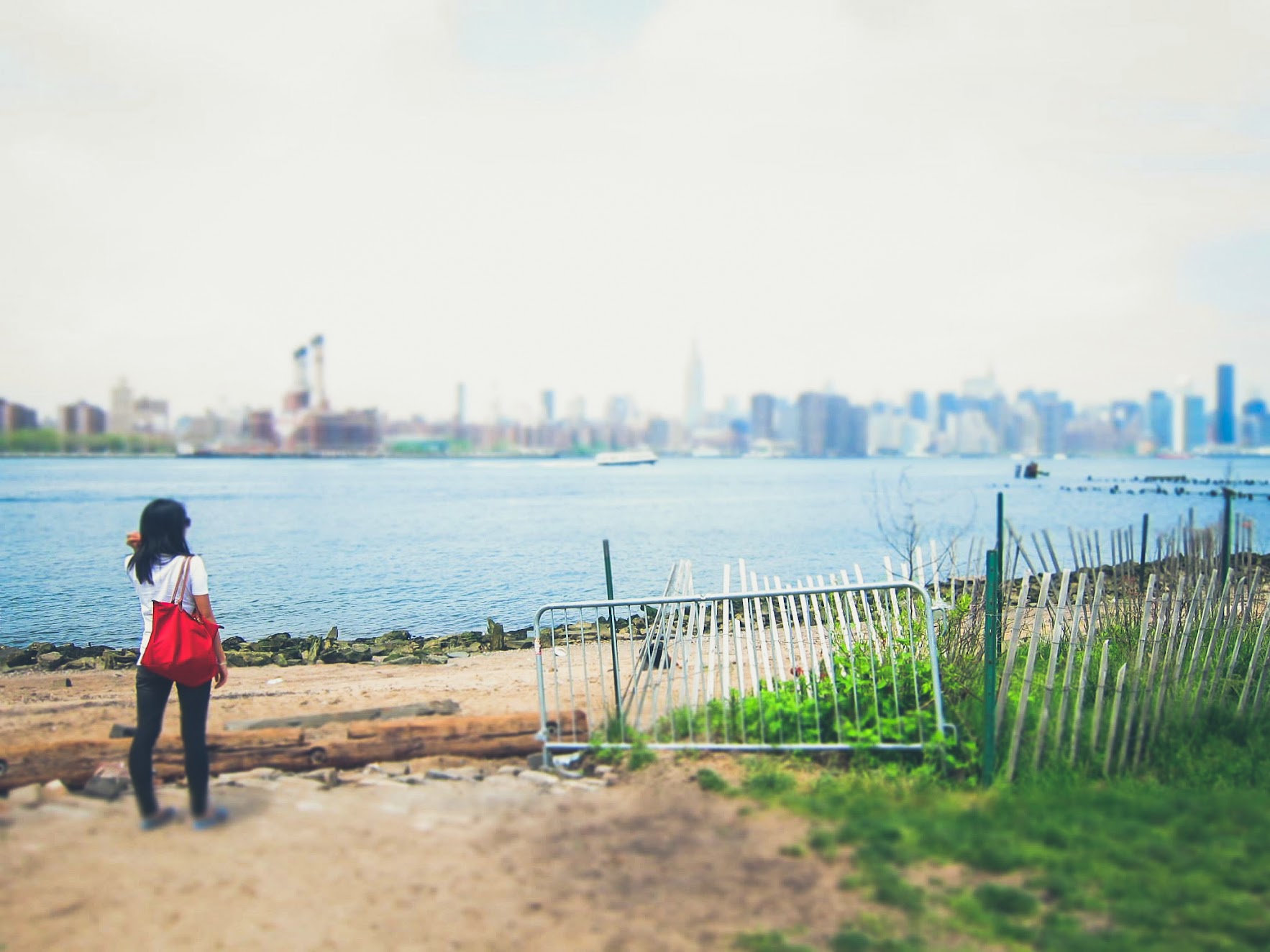 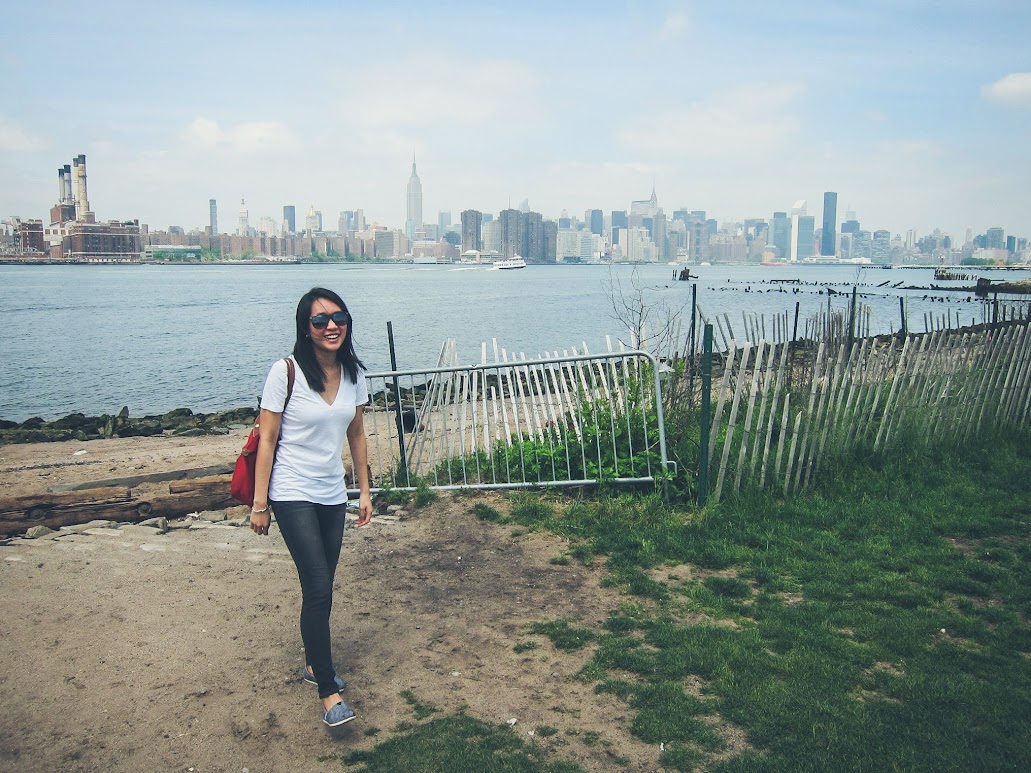 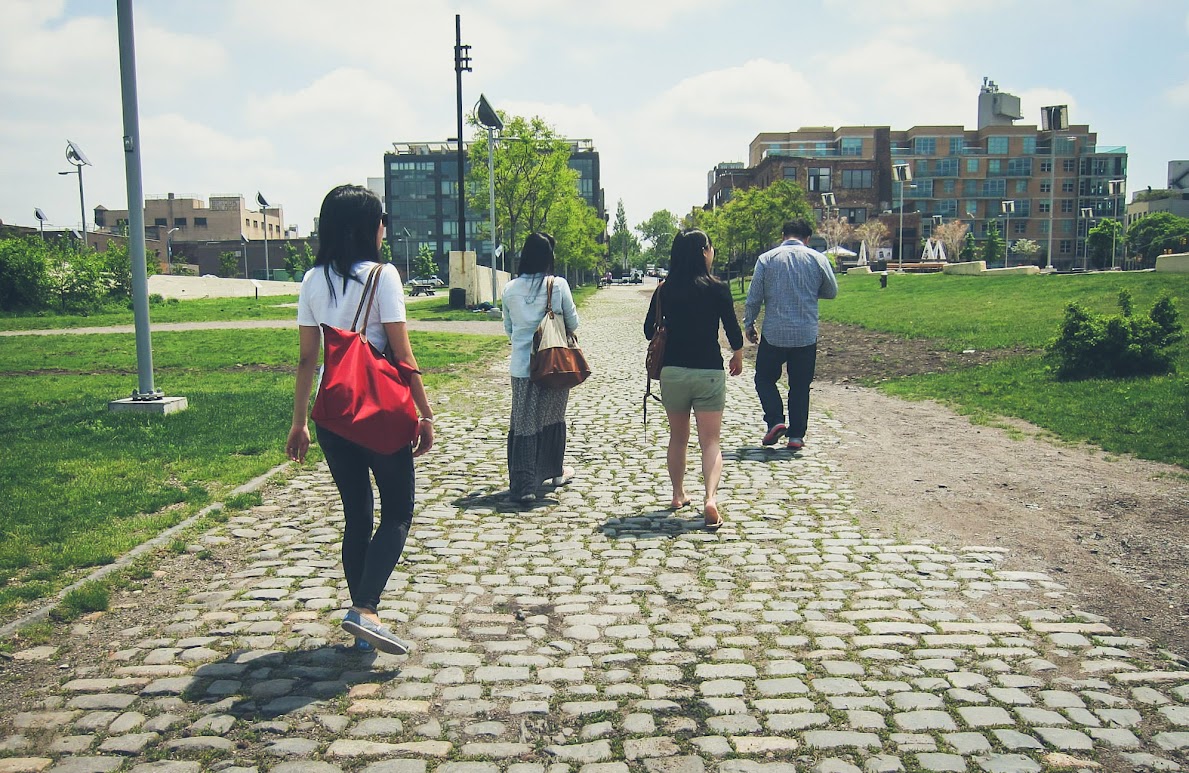 On our first morning in town, Julie and her then-boyfriend, now-husband, Hojin, picked us up in front of Sunny’s apartment in the Lower East Side to grab brunch in Brooklyn.  Julie and Hojin had driven down from Boston to spend a few days with us, and Hojin had grown up in New York so it was a bit of a homecoming for him as well.  Brunch was at Egg, a sparsely decorated, Southern-style restaurant in Williamsburg.  It’s been almost three years since this meal, so I’m hardly doing it justice by talking about it now, but I remember it being quite adequate.  Not very memorable or mind-blowing, but maybe brunch is not a meal that lends itself to that sort of praise.  Afterwards, we drove over to the East River State Park, a scrubby plot of land on the East River facing the island metropolis of Manhattan.  Underneath the clearest blue skies, we stared across the waters at the tranquility afforded by distance.  We could see the gentle undulation of concentrated urban development from one end of the island to the other, the peaks of concrete and glass giving way to valleys of brick and mortar – less an urban jungle than a man-made mountain range.  As so often happens, hunger soon drew our attention inwards, and we left in search of that other New York jewel – pizza. 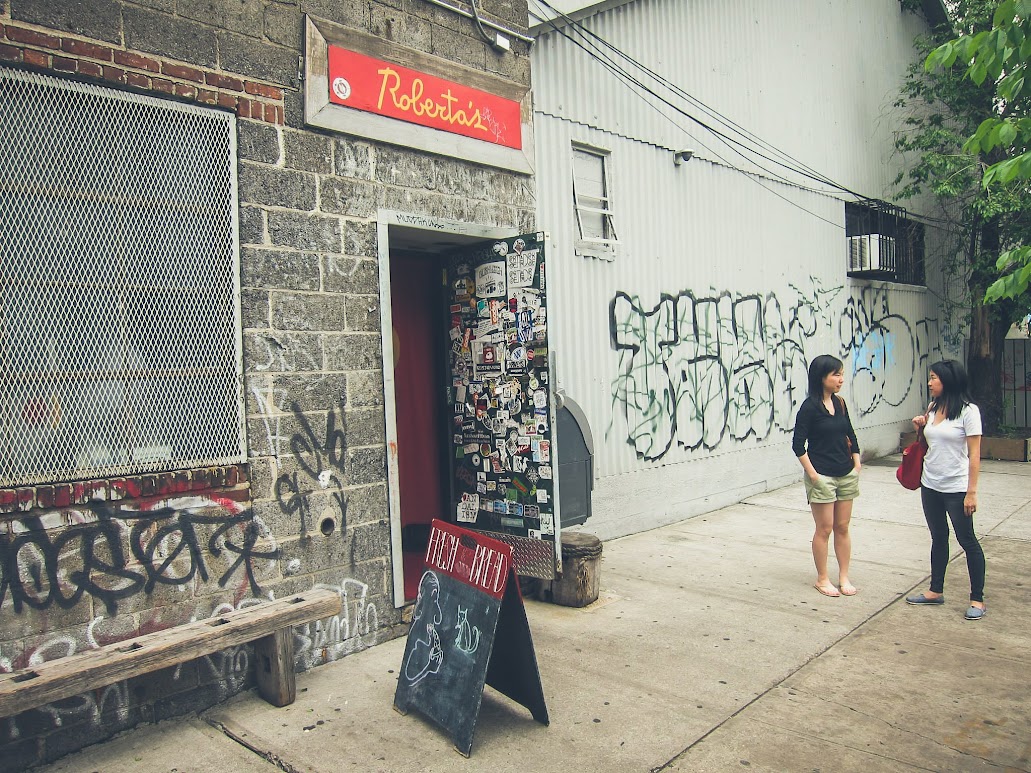 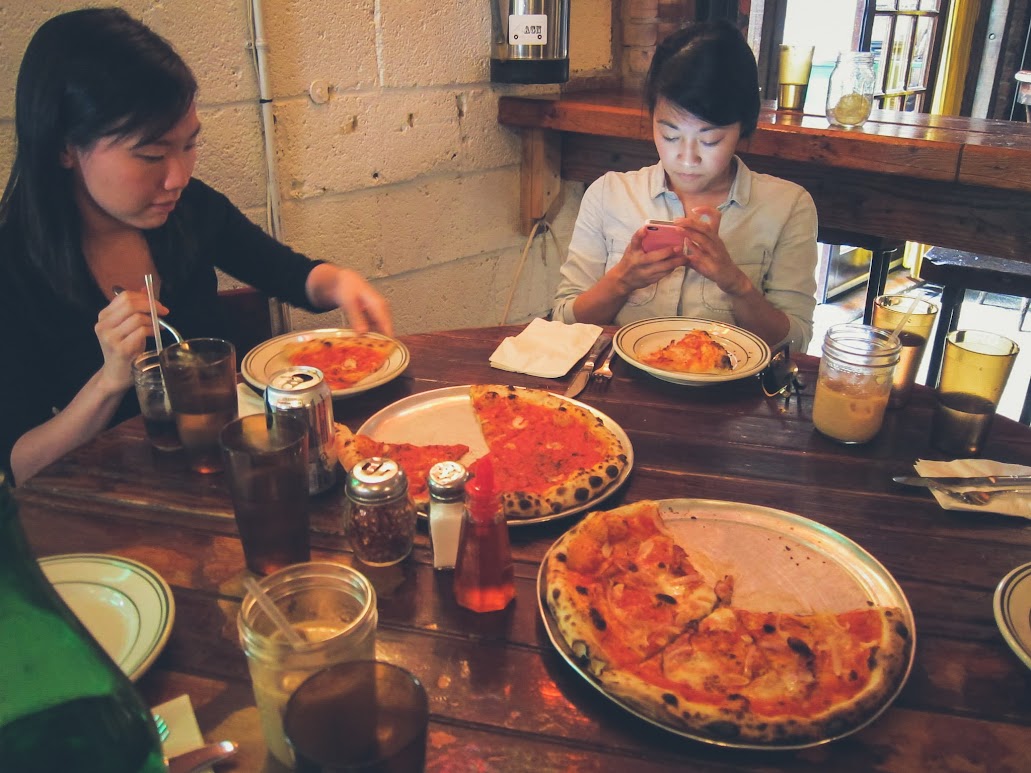 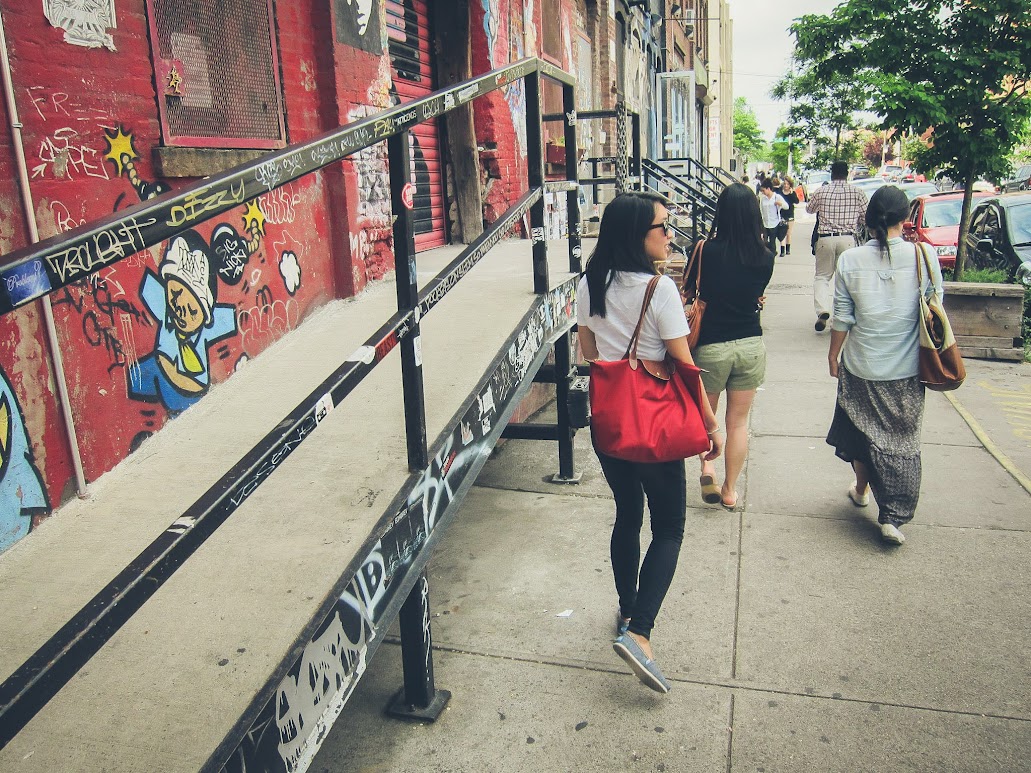 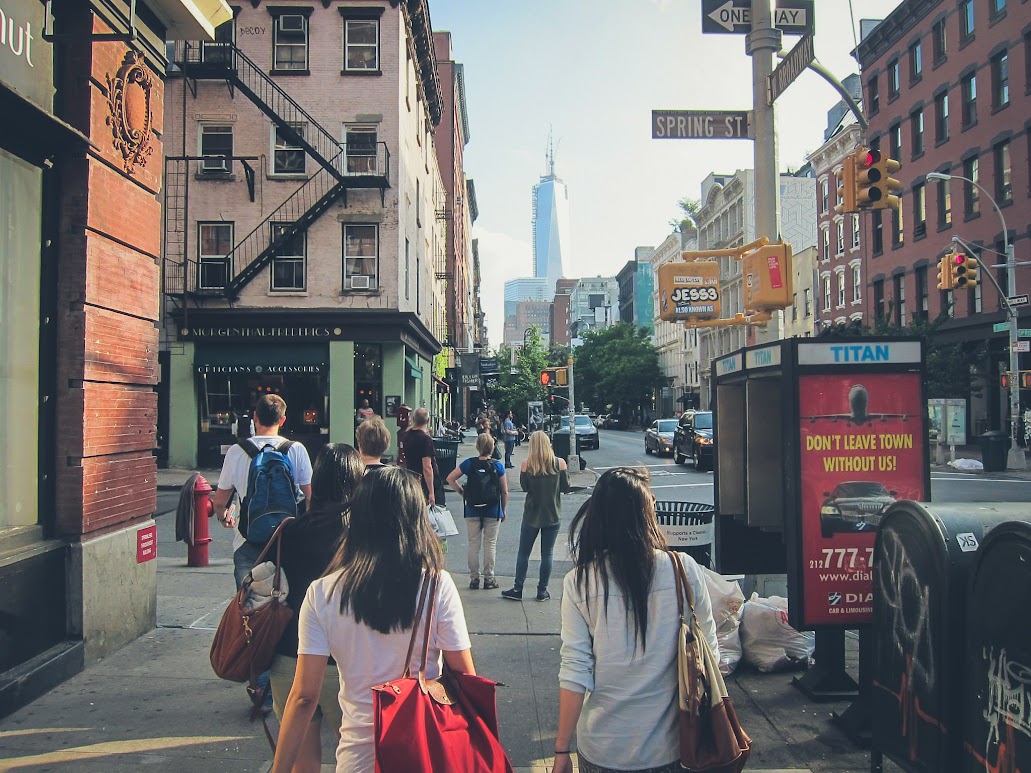 Roberta’s is a popular pizza joint in the Bushwick neighbourhood of Brooklyn.  It opened to widespread acclaim in early 2008, drawing rave reviews for its inventive recipes and eclectic decor, even as the backlash against the hipster-ization and gentrification of the neighbourhood swelled in the background.  For a moment, the restaurant captured a certain vibe that defined its place in the larger cultural landscape, a heady mixture of culinary creativity, community building, and the local arts scene, but all good things must eventually come to an end.  Last year, the ownership group had a falling out over the direction of the business, and it was clear that something had been lost.  I don’t know where along the timeline our lunch in the spring of 2013 falls, whether the moment had already passed or not, but the place was packed and the pizza was to die for. 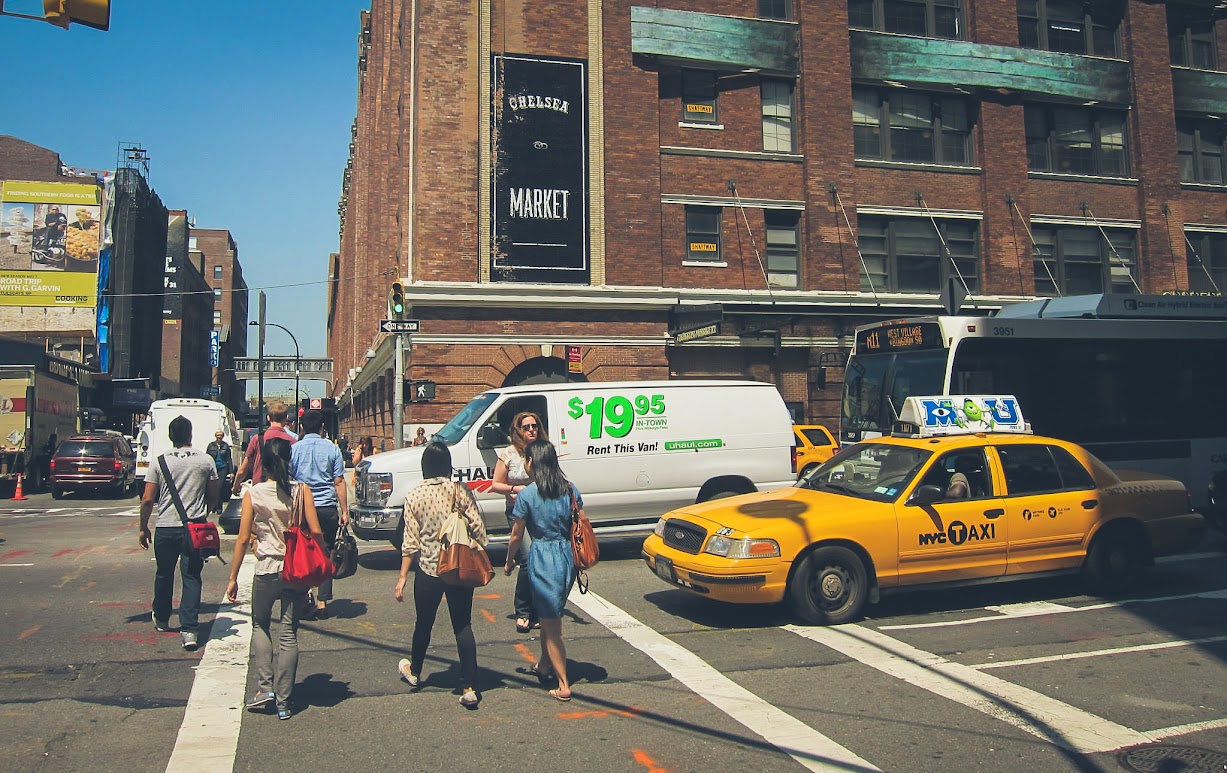 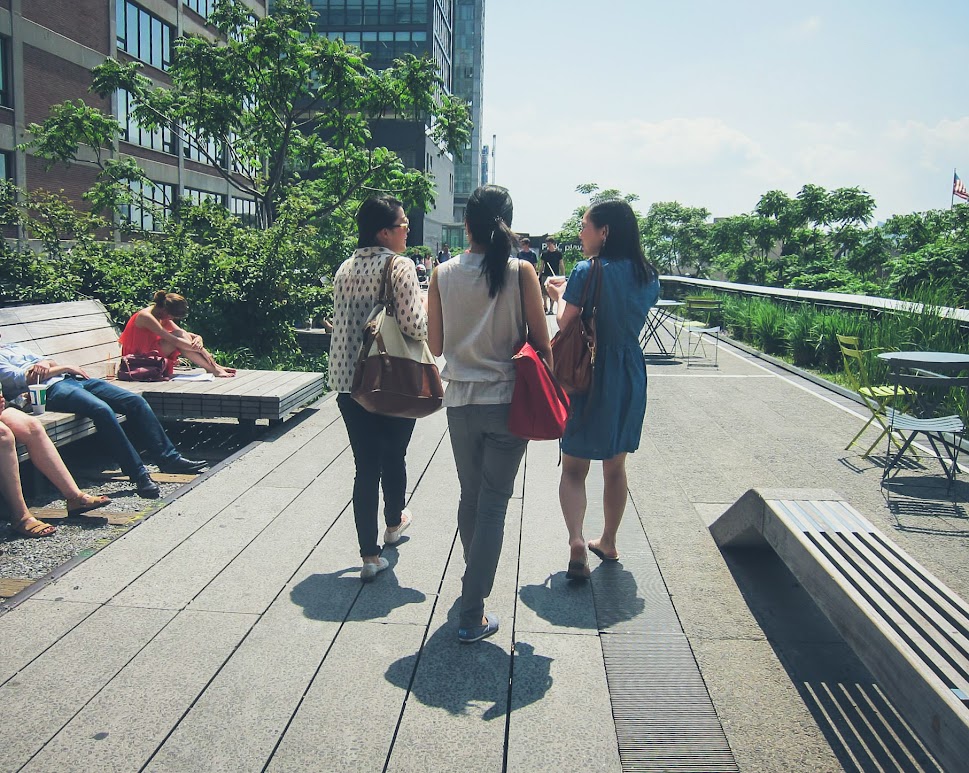 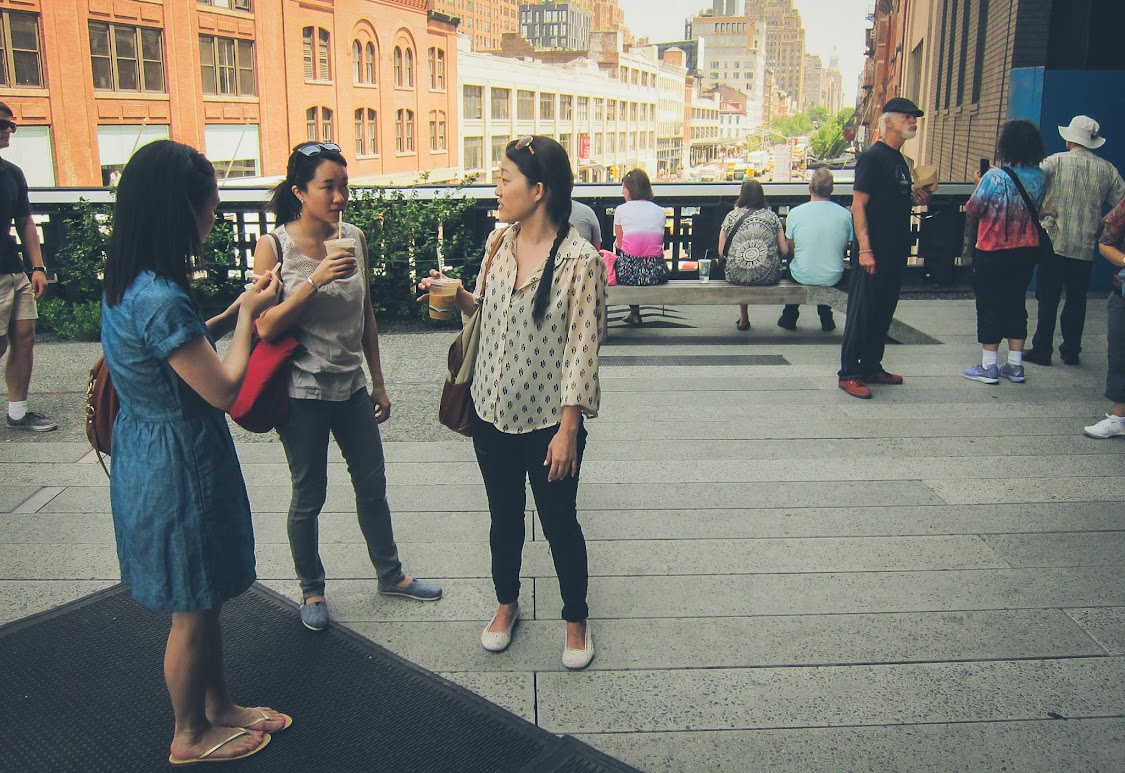 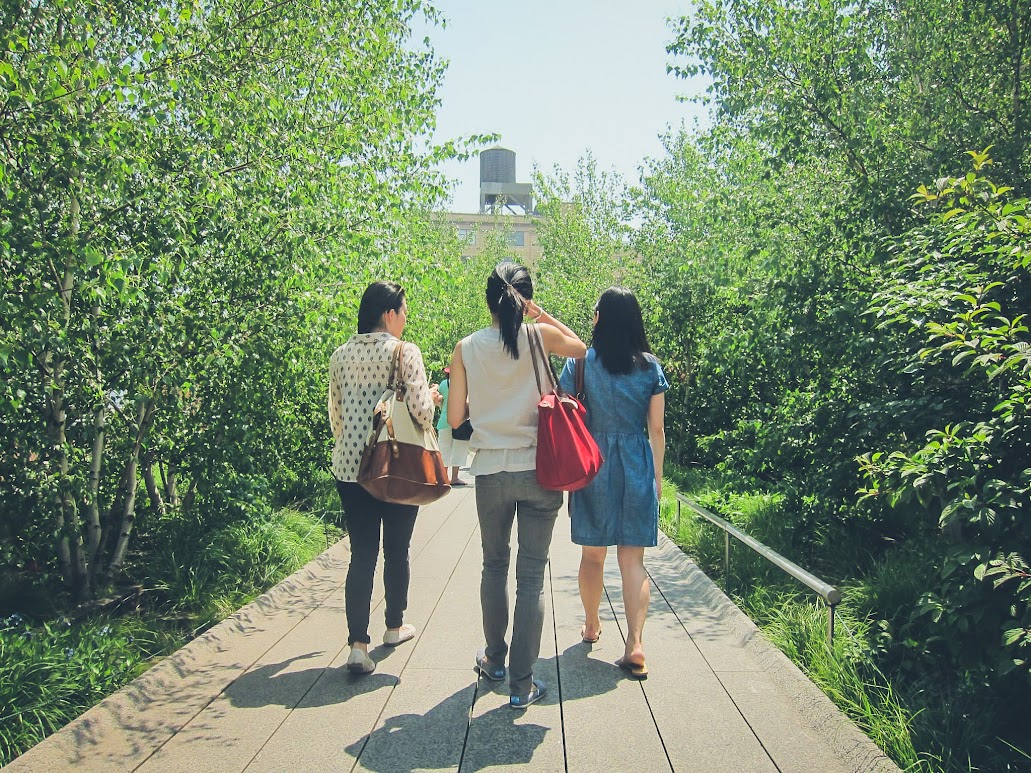 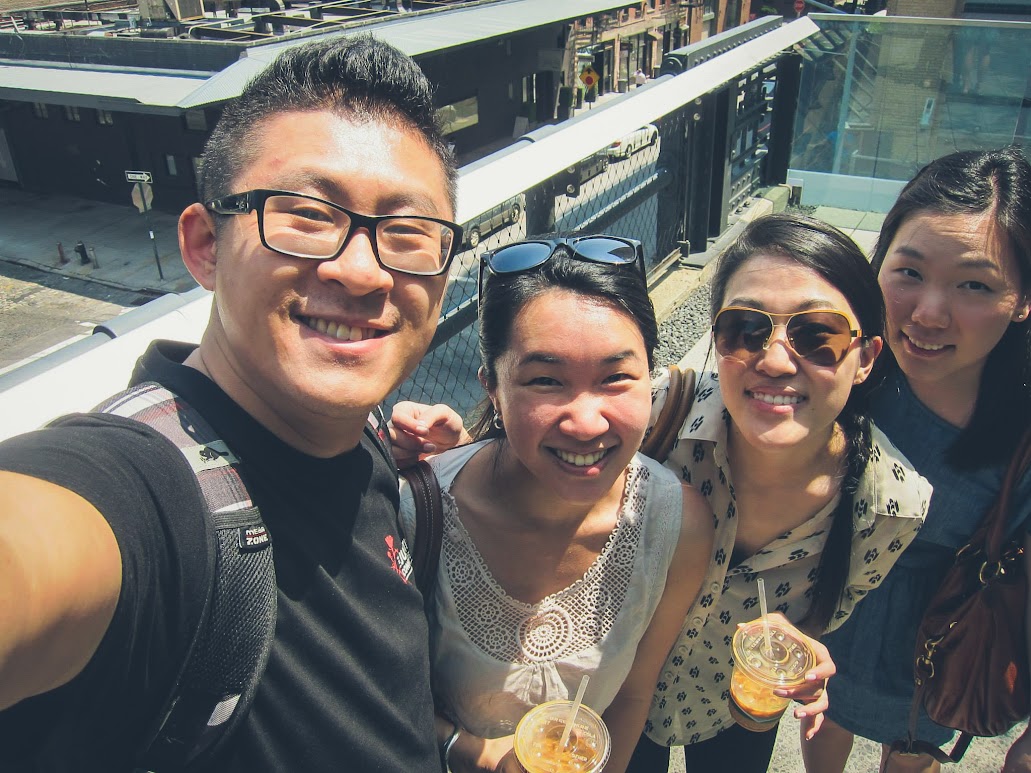 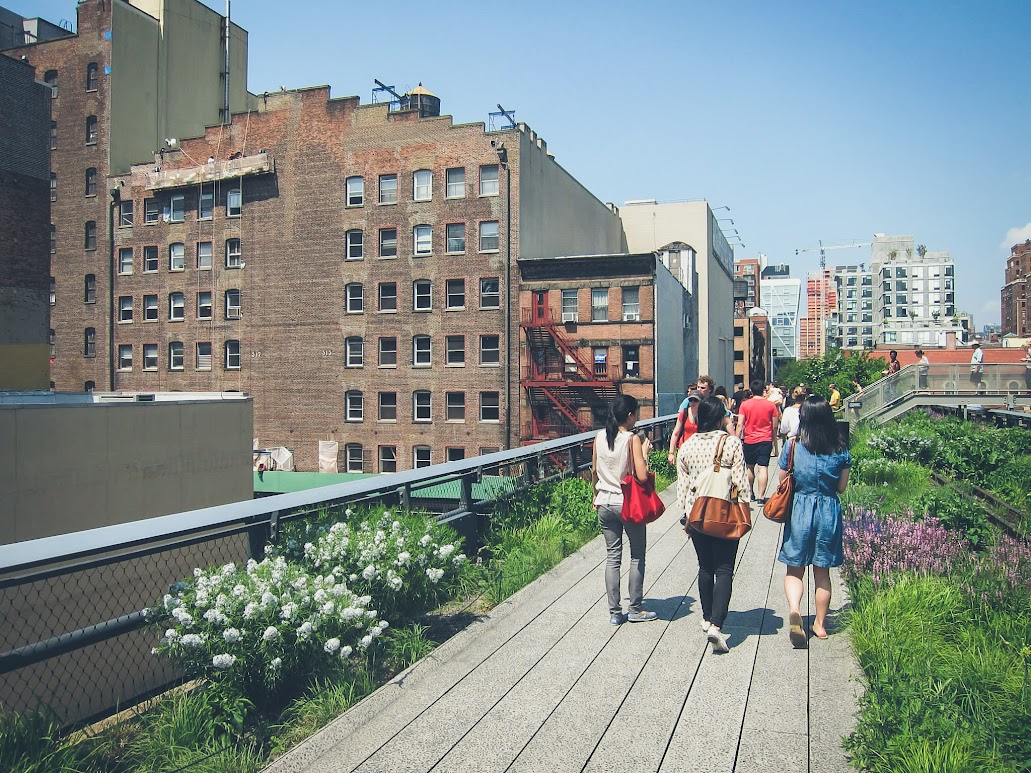 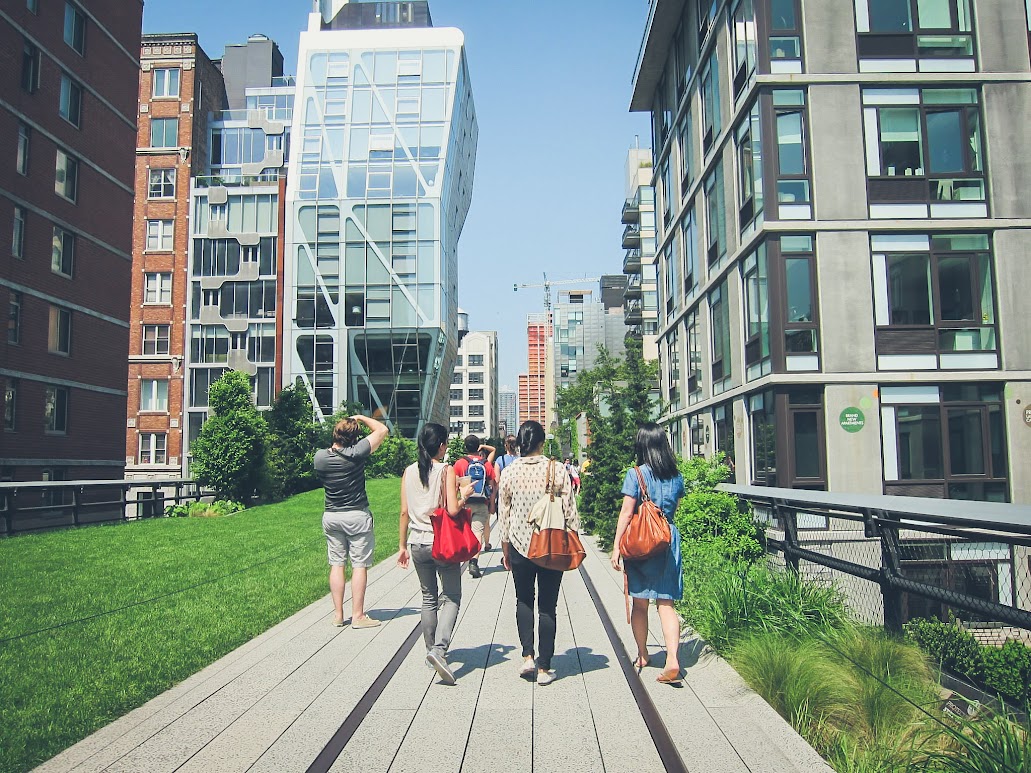 The next morning, I headed over to Chelsea with Ashley, Sunny, and Julie to check out the High Line Park, a 2.33 km long elevated park built on the disused train tracks of the West Side Line.  In 2013, it stretched from Gansevoort Street in the Meatpacking District, to W 30th Street near the Hudson Yards, though more recent development has brought it all the way to W 34th Street.  The four of us headed north starting from the Chelsea Market, strolling through wildflower gardens and shaded tree groves, observing the passing city scenes from our lofty perspective.  At certain junctures, the designers built in amphitheatre seating, encouraging visitors to take a seat and actively people watch on the pedestrians below.

The elevated train line was first opened in 1934 to alleviate street-level traffic in the district, though, by the 1950s, demand for the train service had diminished, and the last train stopped running in 1980.  Throughout the next few decades, various special interest groups called for the conservation of the High Line, and approval was finally given in the summer of 2005 to create the park.  When the first section opened in 2009, it was an immediate hit, revitalizing the surrounding neighbourhoods and re-defining urban and civic spaces in the self-proclaimed Capital of the World.  With its success, other cities around North America have tried to create their own High Line in an attempt to rejuvenate and reclaim the public in public spaces.

What really makes the High Line work, though, and what other cities need to consider, is the dense neighbourhoods and communities that surround its borders.  The blooming flowers and freshly manicured lawns are delightful, but people need something to see from the High Line as well.  As we made our way along the immaculate wooden trail, we gazed upon beautiful, old buildings that told the story of old New York, even as present-day New York gazed down at us from the residential buildings above.  It is this journey on foot through the city’s temporal and social spaces that give the High Line its unique magic, and that isn’t something that can be easily replicated. 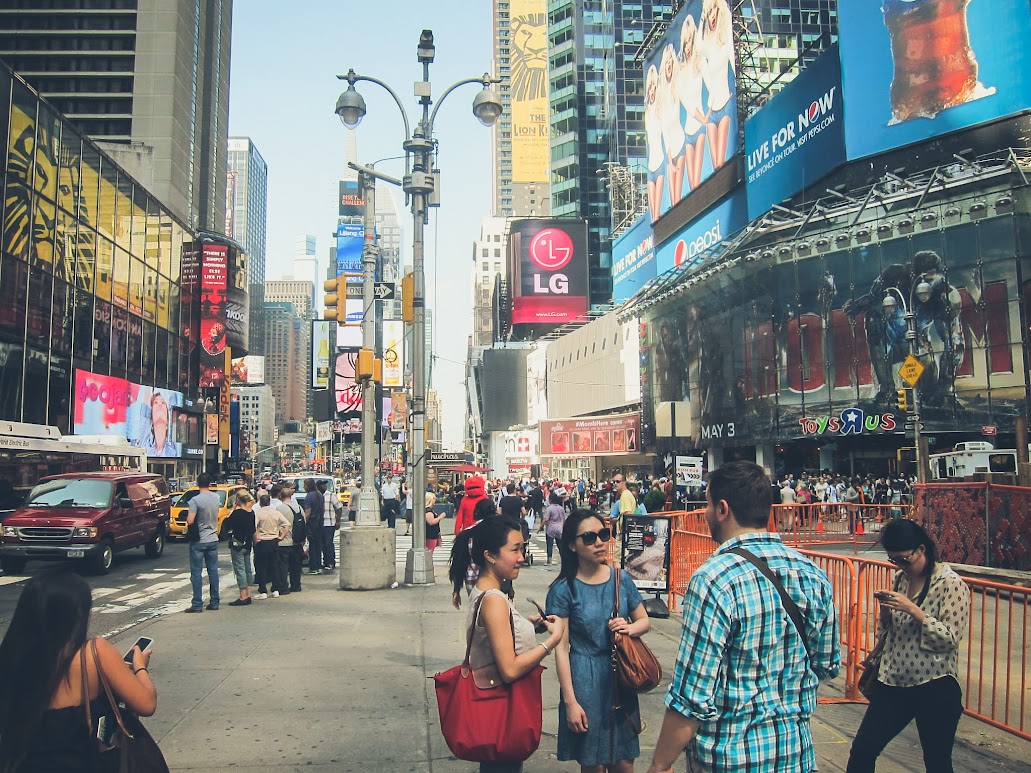 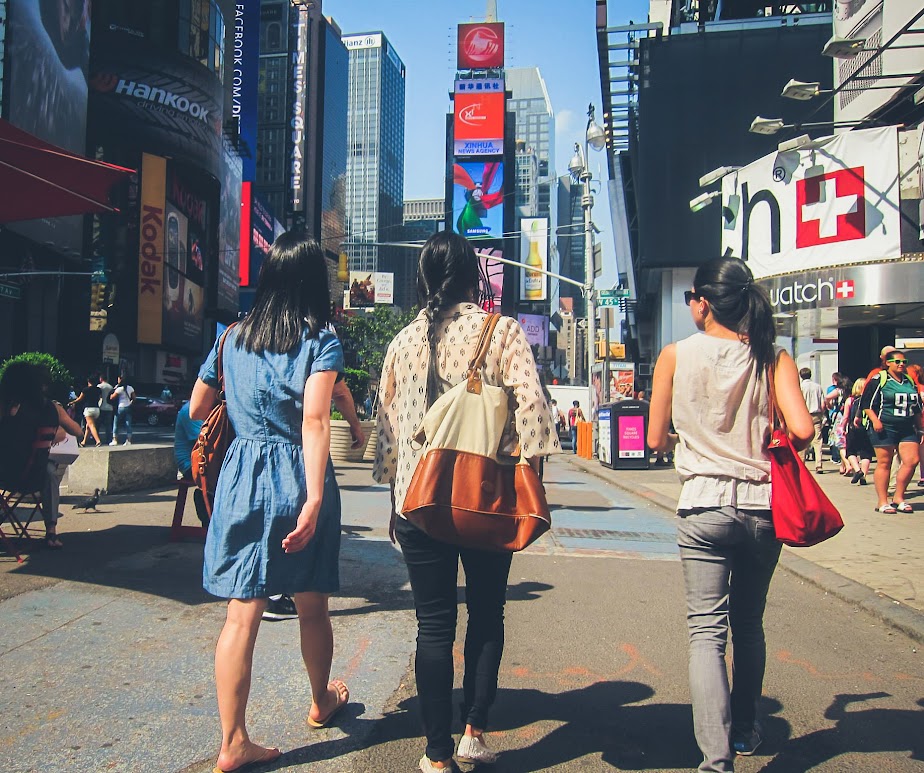 After getting off the High Line at W 30th Street, we walked the rest of the way to the infamous Times Square, a place that exists largely in the collective imagining of New York, and, thus, is almost guaranteed to be a disappointment.  Once known as Longacre Square, it was rechristened as Times Square in 1904 when the New York Times moved its offices to 42nd Street.  By World War 1, it was the city’s entertainment and culture hub, filled to the brim with theaters, hotels, and restaurants, and massive crowds gathered in its public spaces to hear about and celebrate events happening in sports, politics, and international affairs.  However, the 1960s ushered in a decline in its fortunes, and, over the next few decades, it acquired a reputation for crime, poverty, and seediness.  In the late 1980s and 1990s, increasing commercial development and a targeted campaign to rid the square of pornography theatres and other undesirable tenants resulted in a gradual re-shaping of the square’s character into its current, tourist-friendly, Disney-fied incarnation.  Much more can be said about the gentrification of a New York landmark, but I think I’d rather reminisce on where we went afterwards: Chicken and Rice! 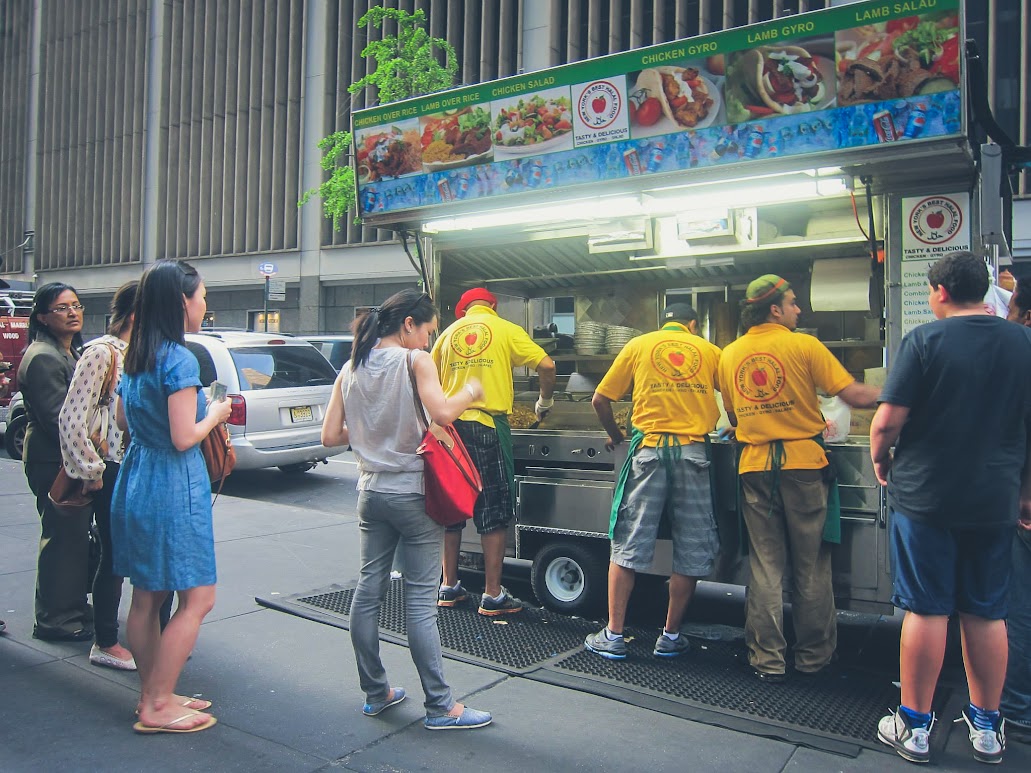 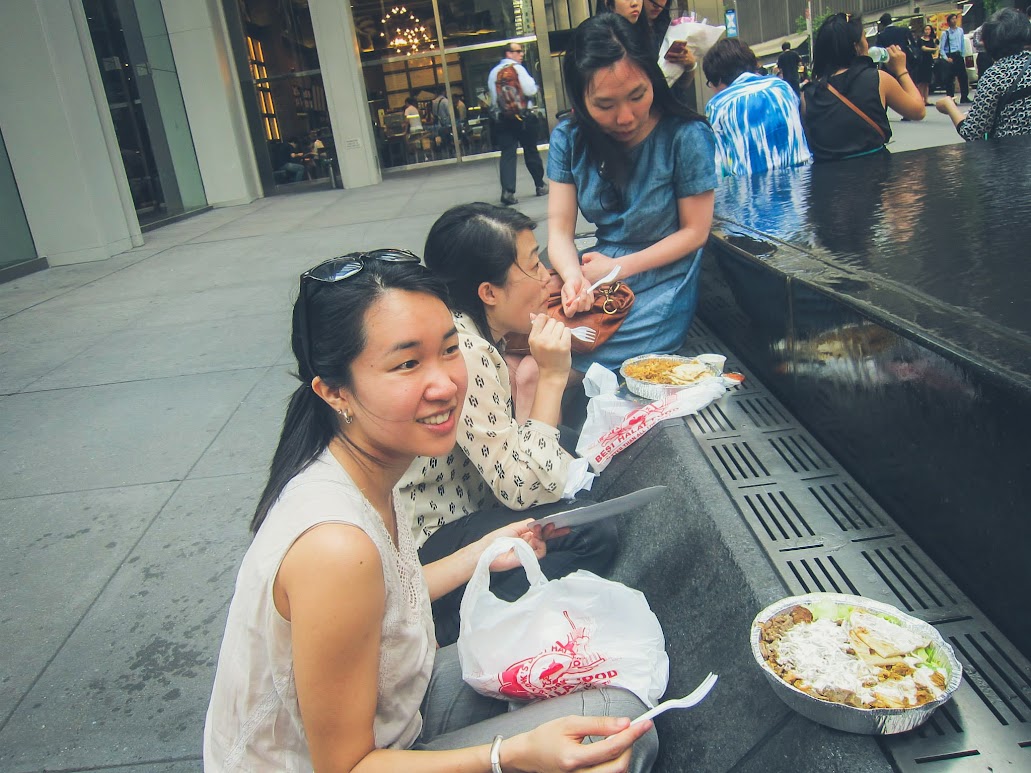 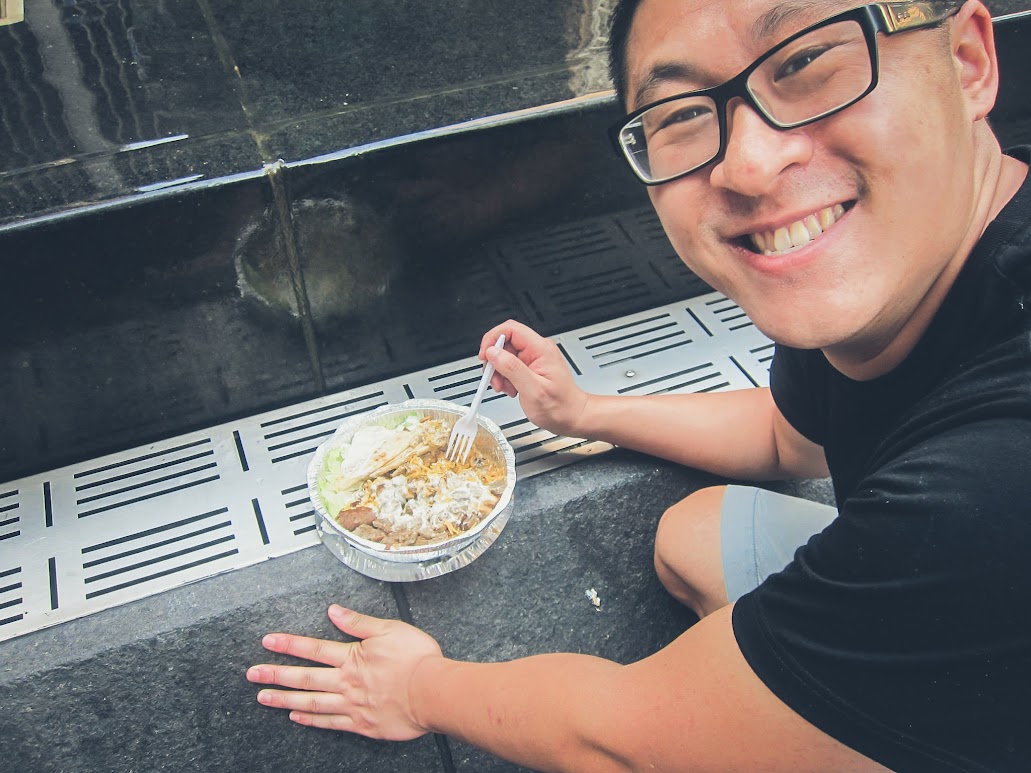 Ashley had been raving about Chicken and Rice ever since we confirmed our trip to New York.  She had once lived in New York for three months while doing a media internship, and she had made multiple trips into the city when she was studying and working in Boston, so there was a list of things she wanted me to try as a first-time visitor.  The Chicken and Rice food cart at 53rd and 6th was near the top, if not at the top, of the list, and it did not disappoint.  The thing is, there are a few carts on that particular intersection, and I can’t remember which one is the legit one, or if they are all actually legit.  The composition of the meal is relatively simple: chicken and/or gyro meat with rice and special sauce, but the result is anything but.  That combo of textures and flavours in a delicate aluminum foil pan, eaten while crouching beside a public fountain, is the epitome of all that is good about street food – I’m getting sweaty just thinking about it.

Over the next few days, we’d continue to explore the city, see friends, and eat like kings, but there’s just too much for one post, so I’ll leave the rest for Part 2. 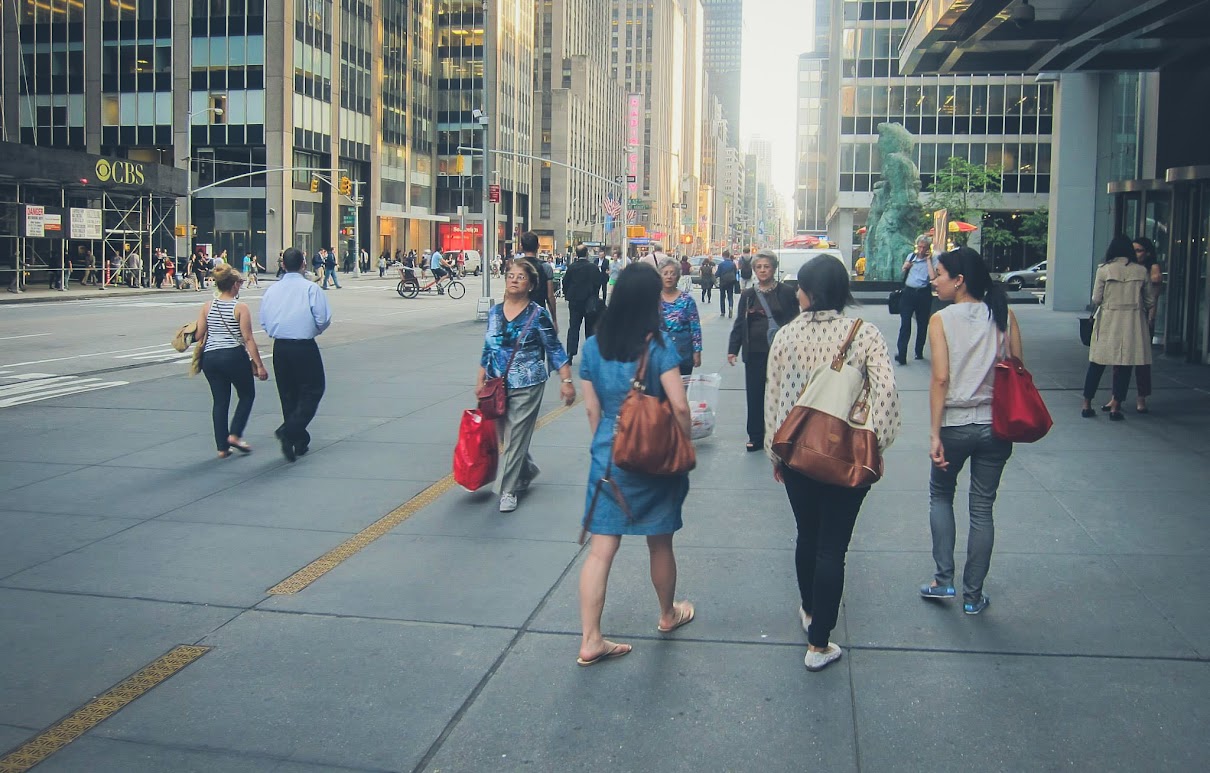