As we sped down the Grand Canal on the crowded public vaporetto, iconic images and impressions drawn from the Western imagination flew by in rapid succession. This was Ashley’s second time in Venice, and my first visit to the lagoon metropolis, a vision of a city built on the dreams and ambitions of merchants and mercenaries. The idea of Venice grew and shifted out of the stilted homes of Roman-era fishermen, the grand shipping houses and arsenals of medieval nobility, the decadent palaces of Renaissance princes, and the current tourism-dependent sinking city of the rising seas. It seems almost impossible for Venice to live up to the weight of its internal history and external expectations, so over-exposed are its canals and the Venetian Gothic-style structures that seem to float on the sea itself. And yet, it completely succeeds in doing so. It was a beautiful winter’s day, the sky a remarkable shade of blue, and the sort of crispness in the air that puts an extra skip in your step. We disembarked from the vaporetto onto the steps of the Piazza San Marco, eager to wade into the thick history of this remarkable city. 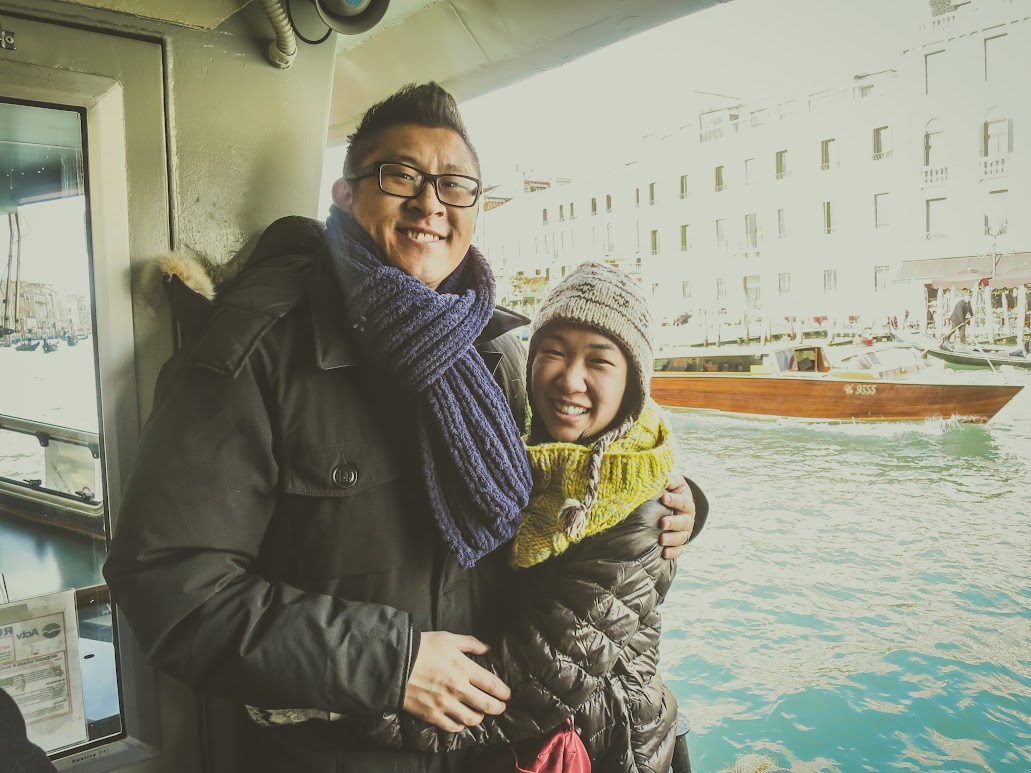 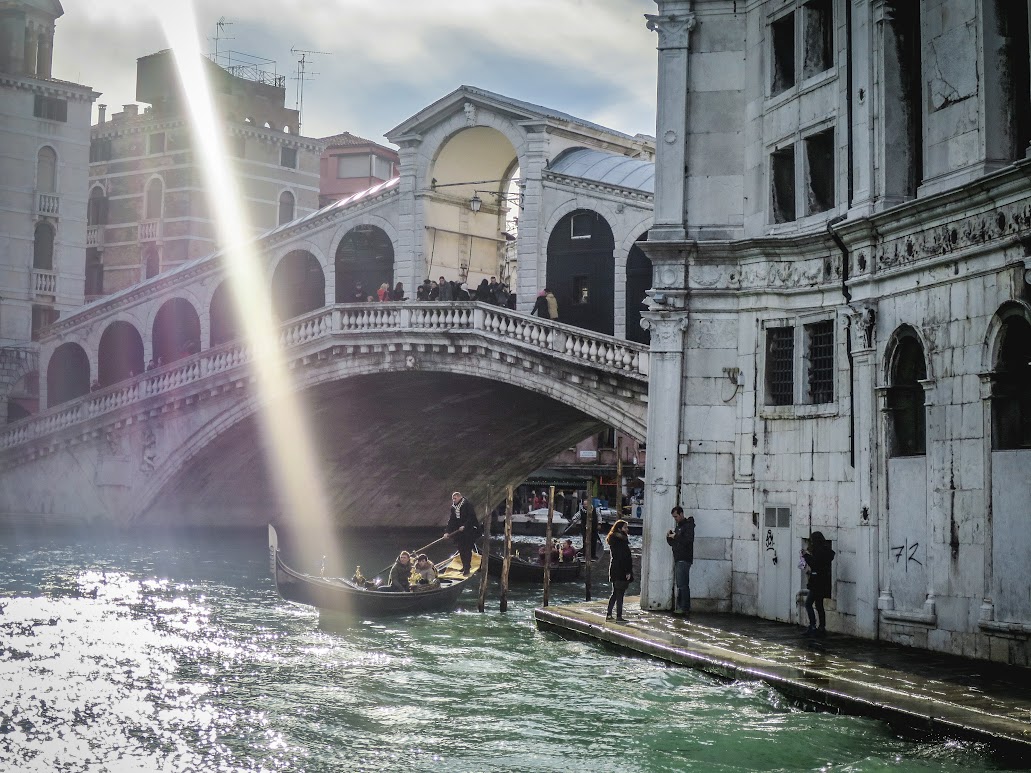 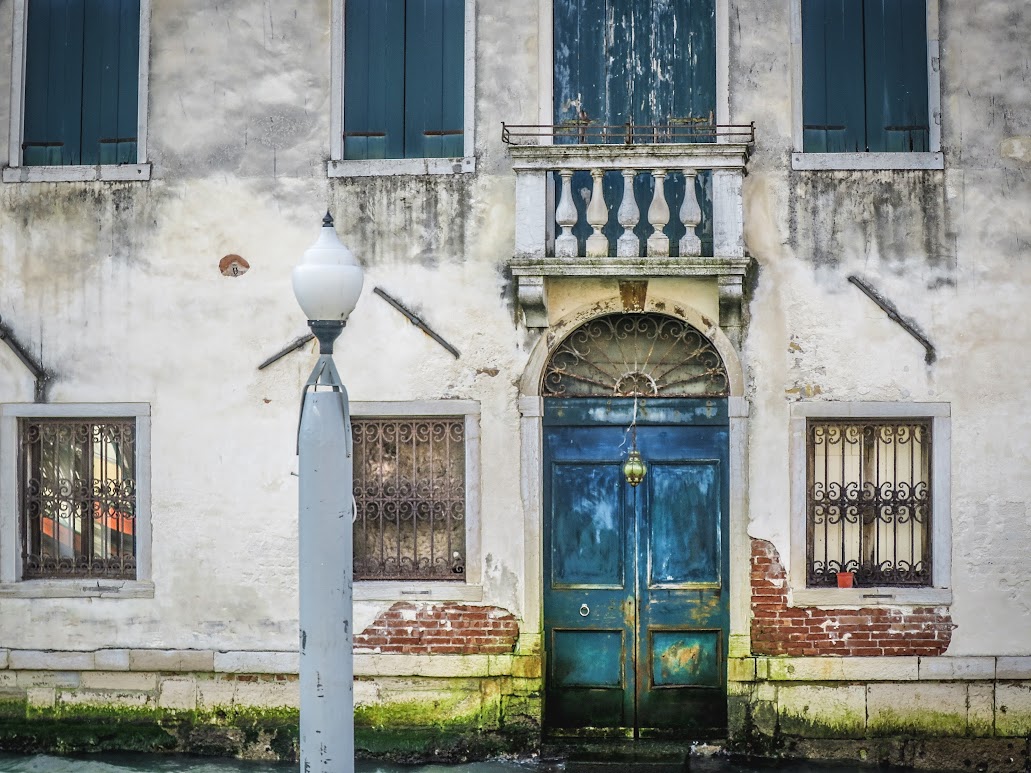 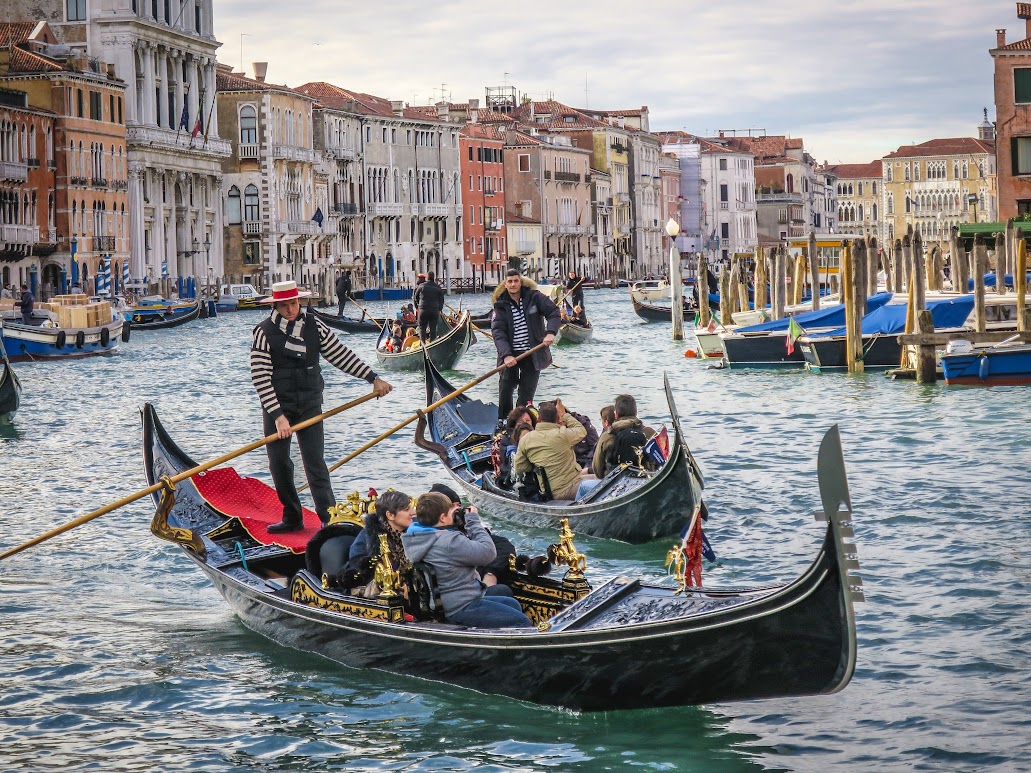 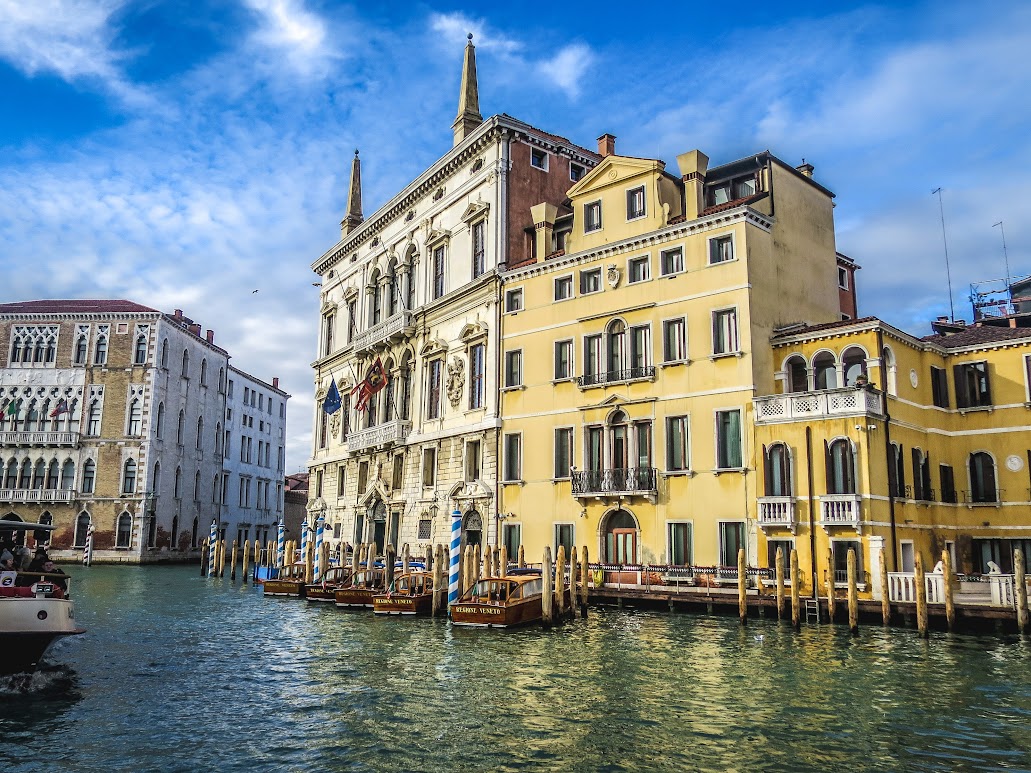 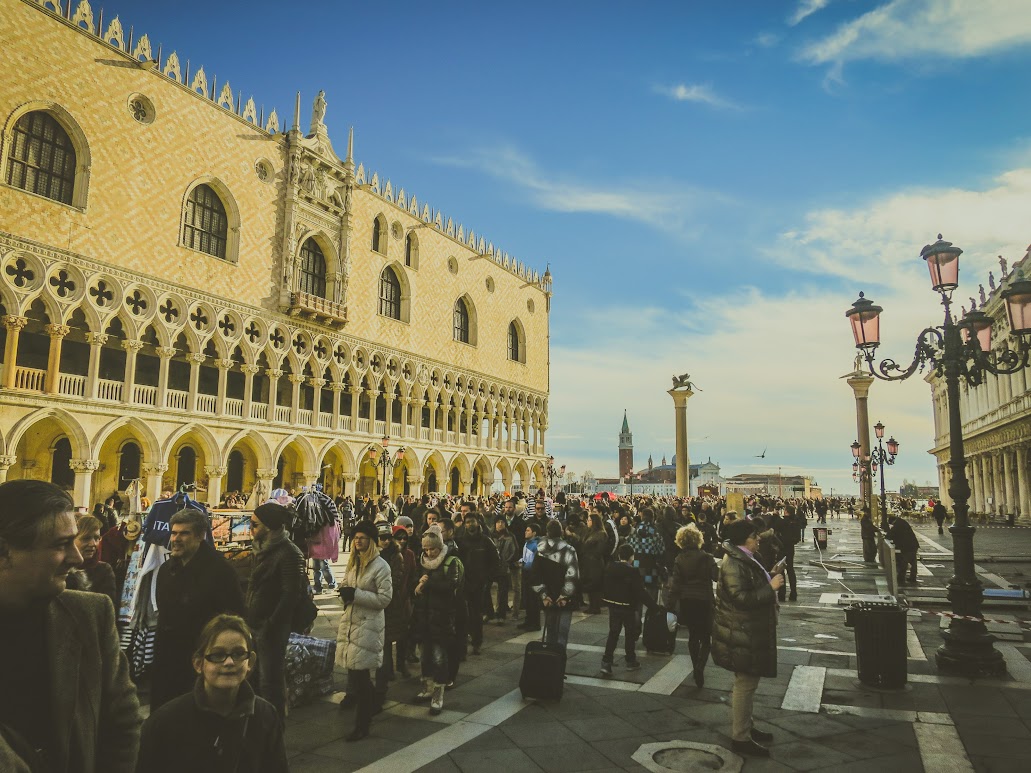 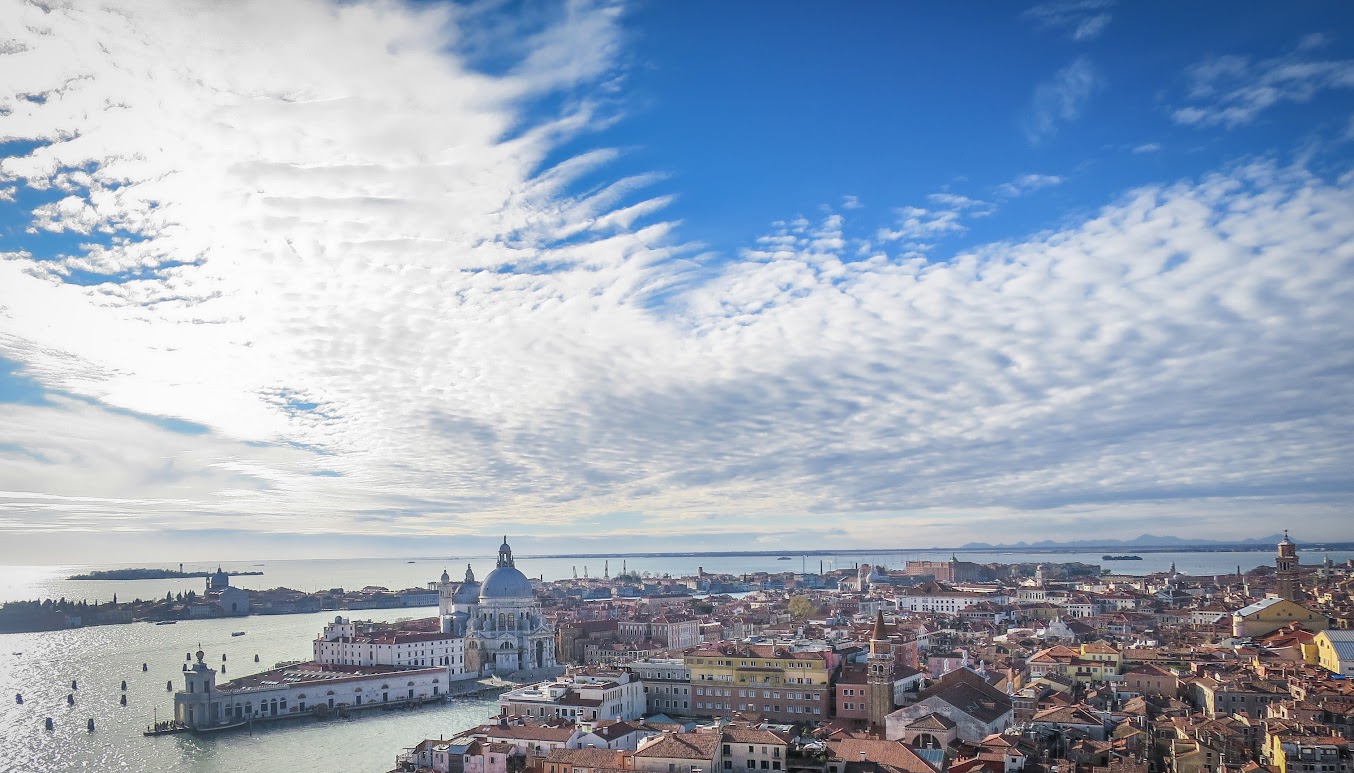 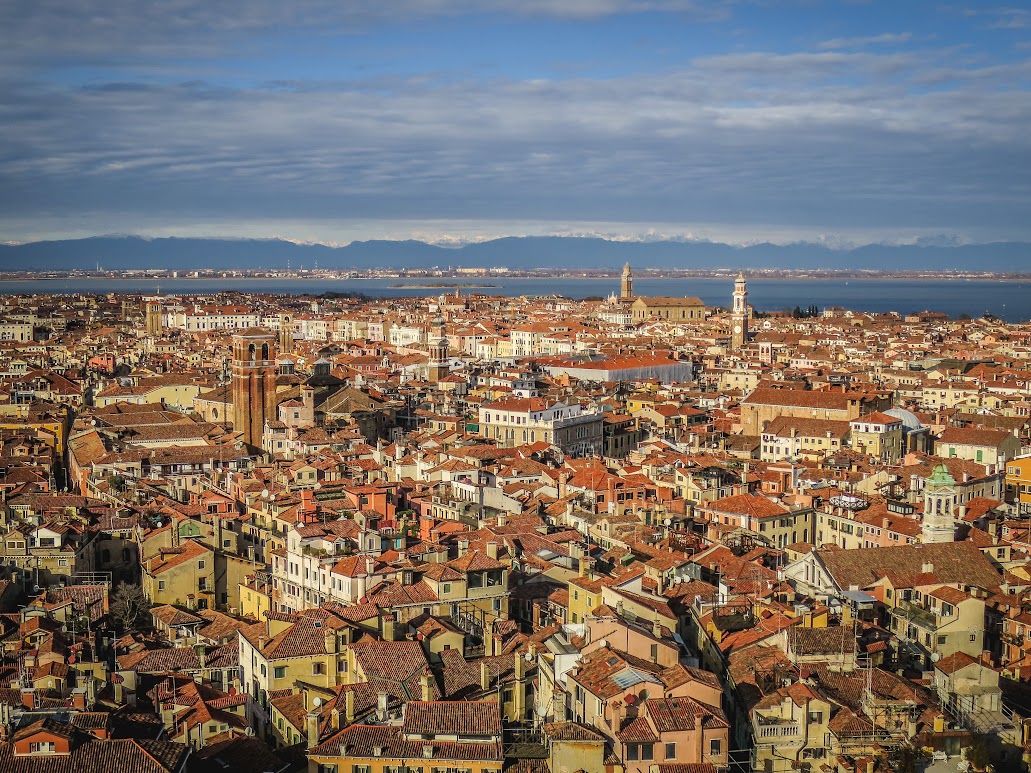 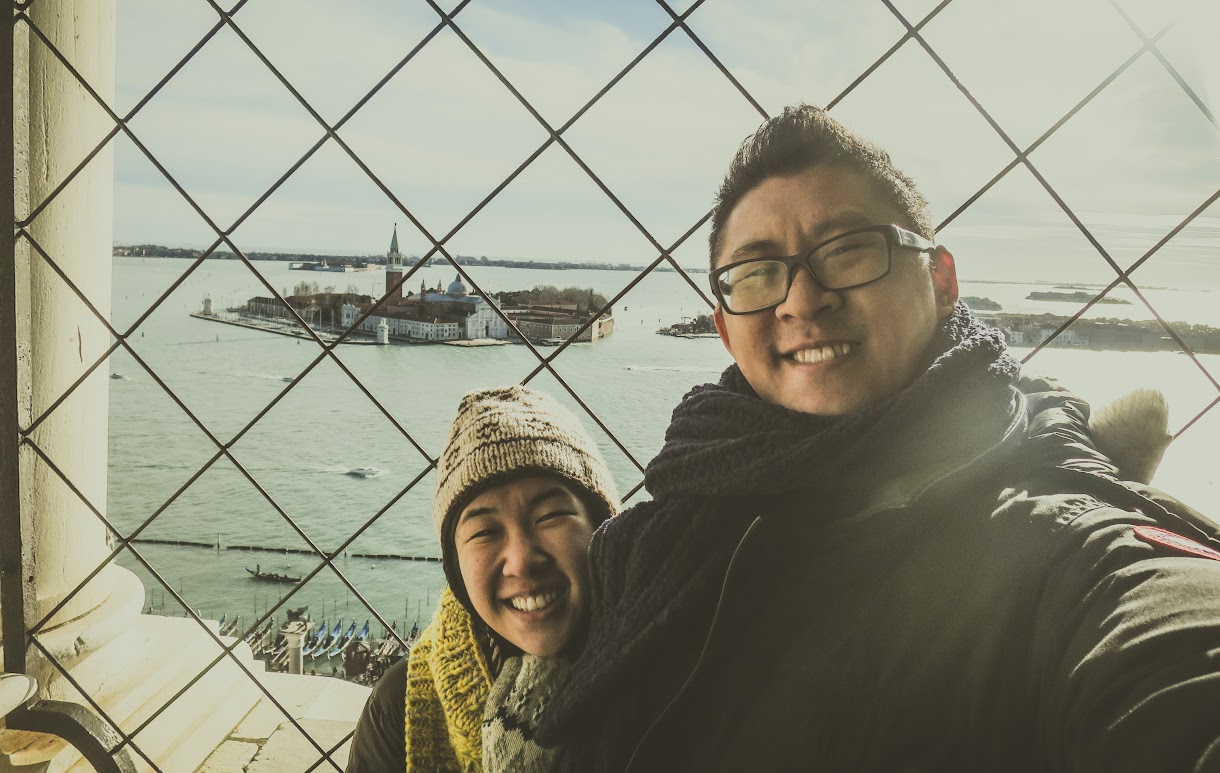 Venice proper is divided into six sestieri, administered separately in days past, but now more of a historical categorization than a reflection of current city management. The Piazza San Marco, or St. Mark’s Square, is located in the sestiere of San Marco and is considered the very heart of the city. From its docks, the Venetian Republic would send off its ships of trade and war, the fate of the city and its lands at the mercy of the seas. Surrounding the square are the Palazzo Ducale, the residence of the elected Doge of Republican Venice, St. Mark’s Basilica, the Doge’s personal chapel, the Biblioteca, holding the Library of St. Mark’s, the Procuratie, homes and offices of the Republic’s civic leaders, and St. Mark’s Campanile, the imposing 20th century reconstruction of the famous 16th century bell tower. Ashley and I skipped the lines into the palaces-turned-museums and headed for the tower to get a bird’s eye view of the city. With only a day to explore, we prioritized the streets and canals over the interior spaces, and, from San Marco, we found our way to the sestiere directly to the east, Castello. 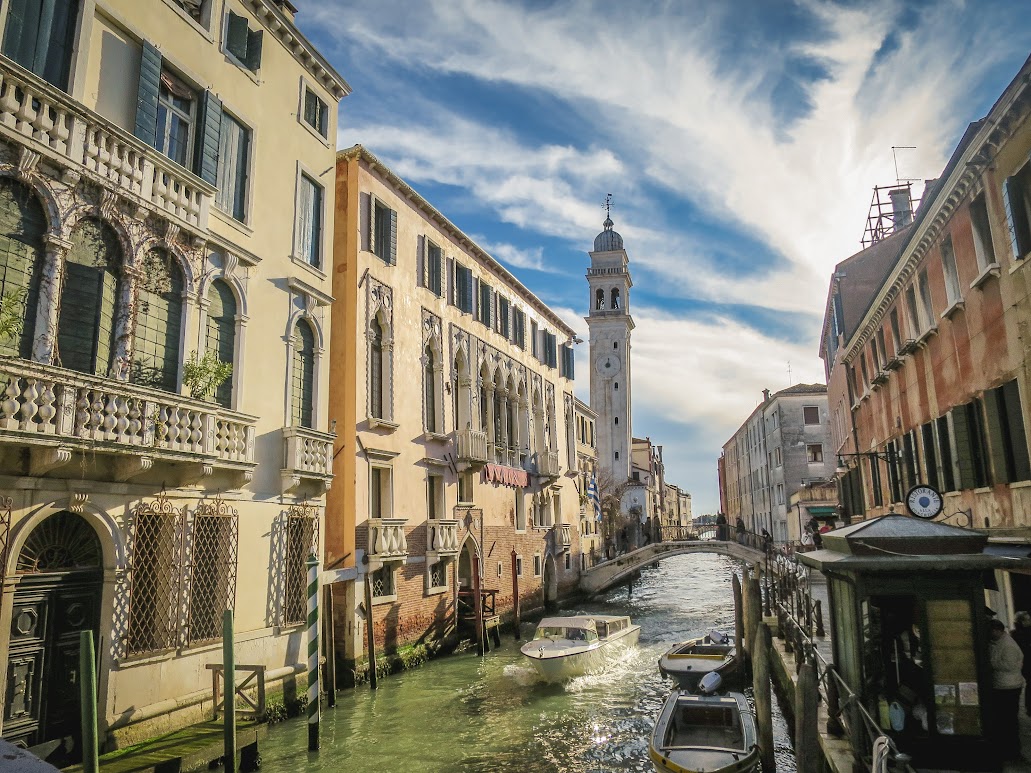 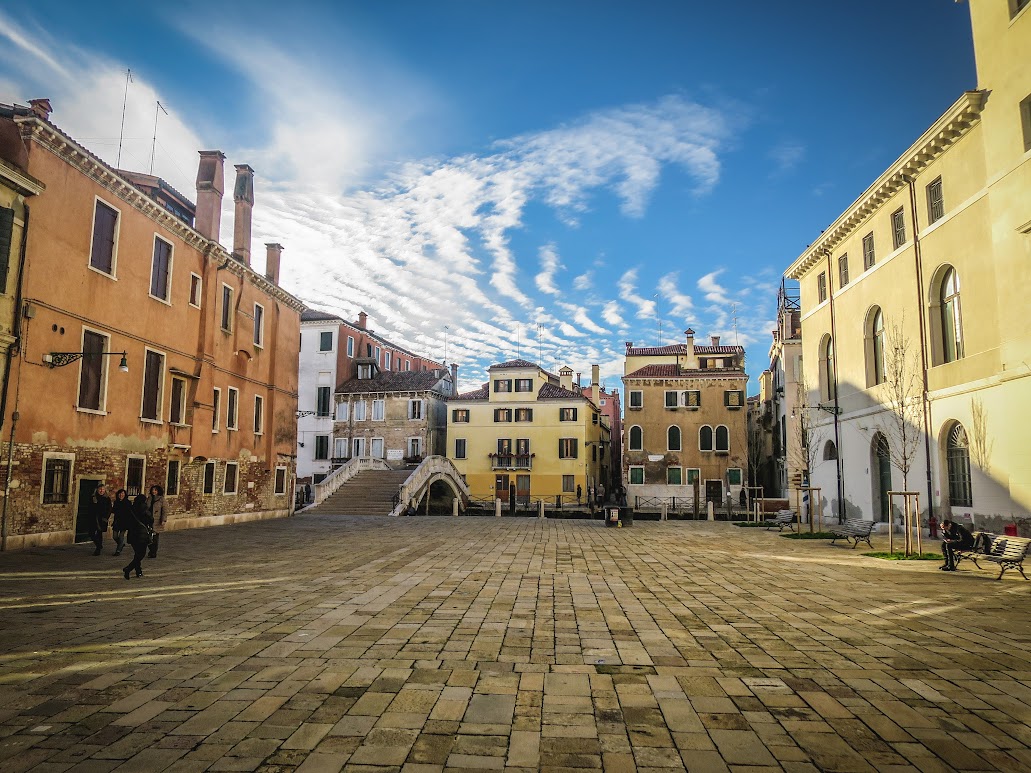 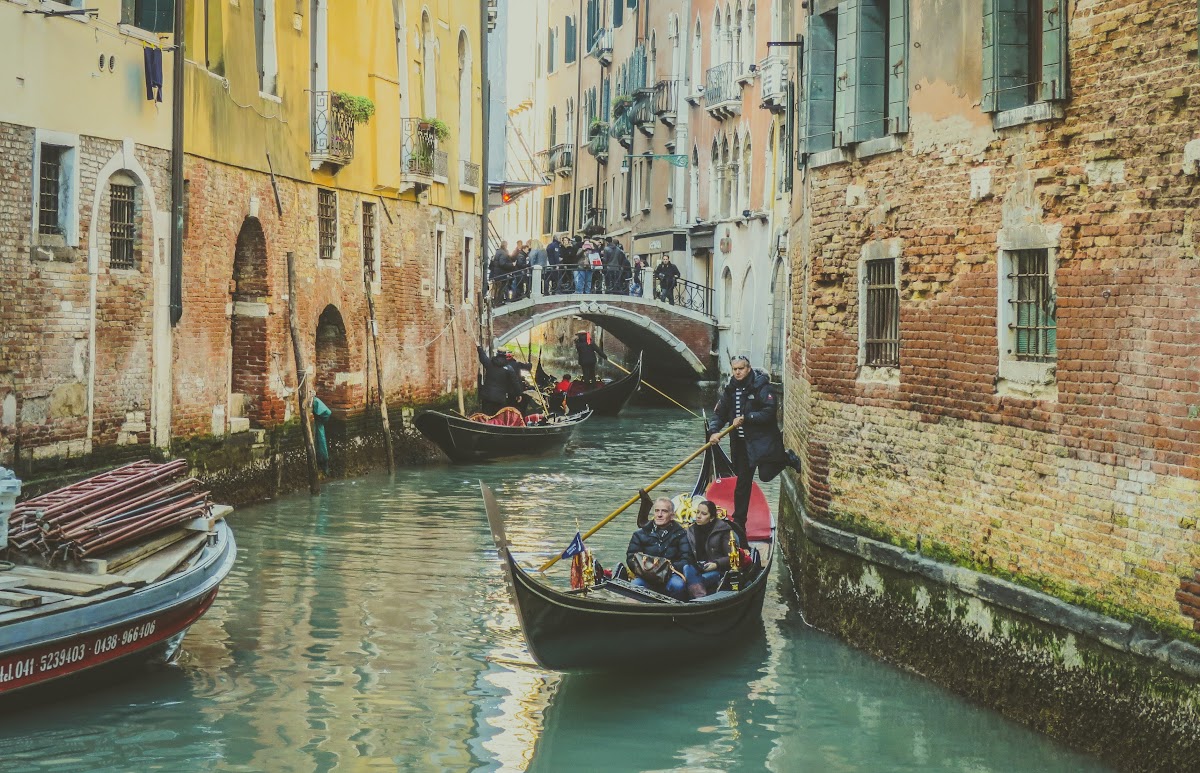 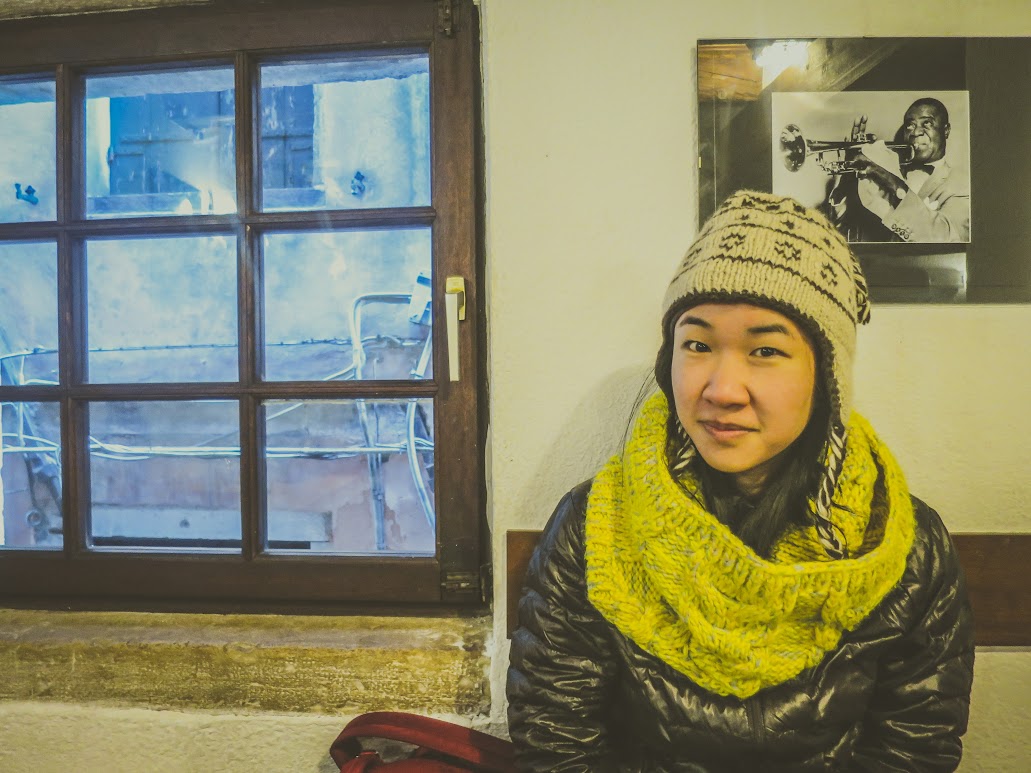 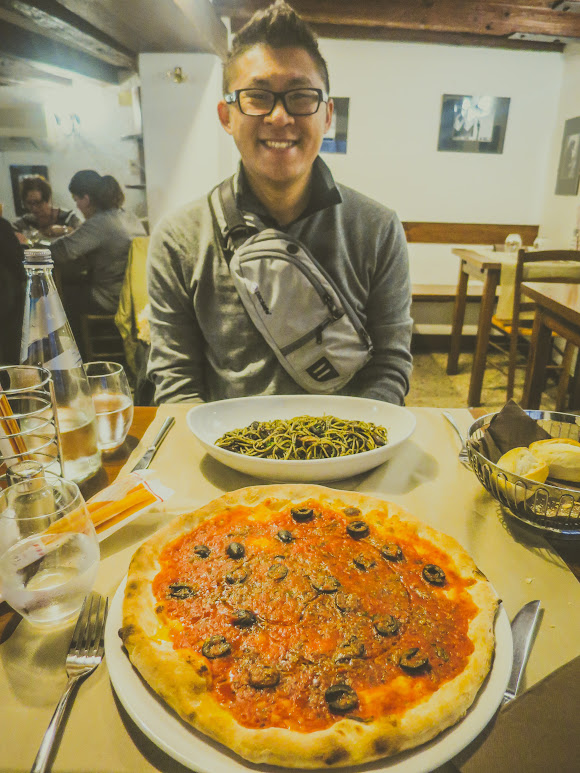 The Most Serene Republic of Venice, or La Serenissima, was, for a time, one of the leading Mediterranean commercial and military powers. From its home base of Venice, protected by the waters of the Venetian Lagoon, it controlled, at various times, the Dalmatian and Adriatic coast in modern day Croatia, Montenegro, and Albania; Corfu and the Greek Ionian Islands; the Peloponnese peninsula in southern Greece; the Greek islands in the Aegean Sea; the Mediterranean islands of Crete and Cyprus; as well as considerable mainland territory on the Italian peninsula. It also maintained trading houses and networks from Byzantine Constantinople to Mamluk Alexandria, and projected power into the Levant throughout the Crusades. What gave Venice its ability to control and influence far-flung, and much larger, cities and territories were its peerless naval forces, a massive armada of ships churned out in record time from the famous complex of shipyards and armories known collectively as the Arsenal, located in Castello. Though the days of industry and innovation on this eastern edge of Venice are long gone, the now-silent streets and piazzas of Castello are perfect for a quiet morning of wandering and soul searching. 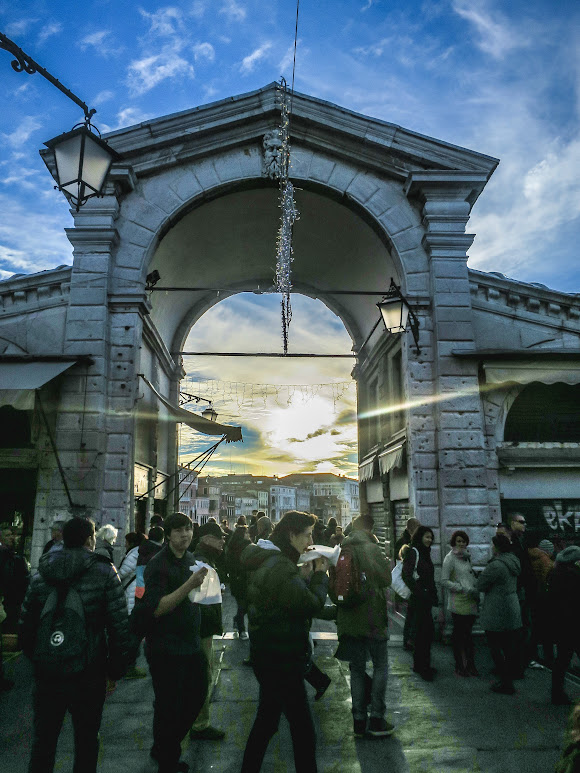 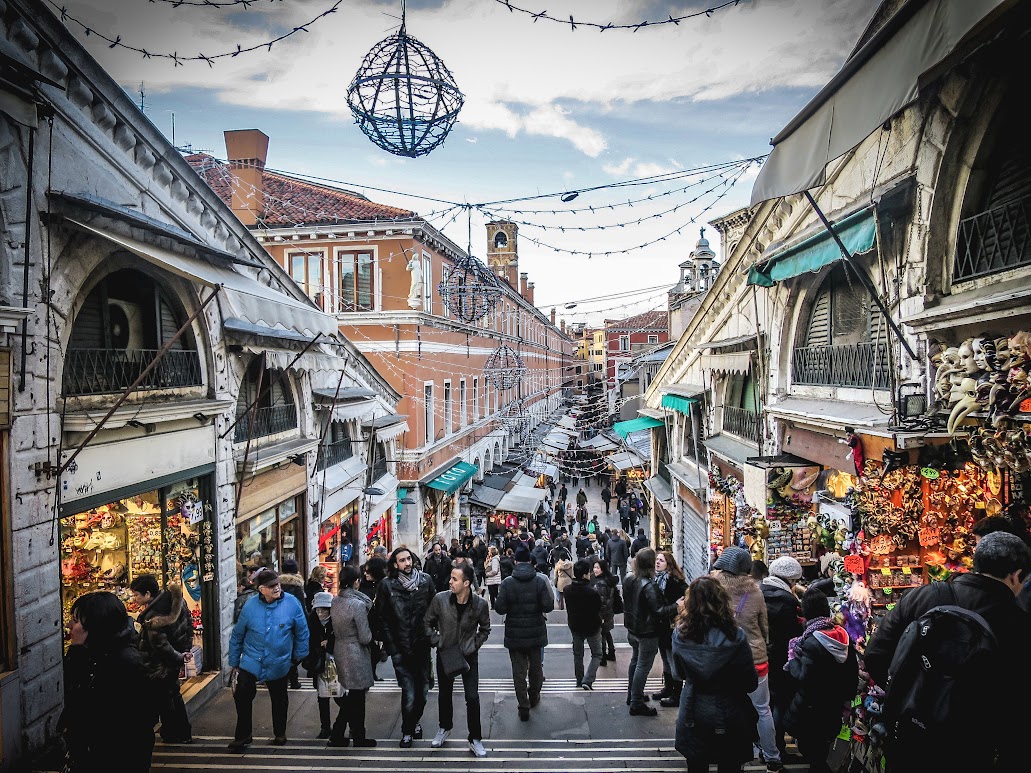 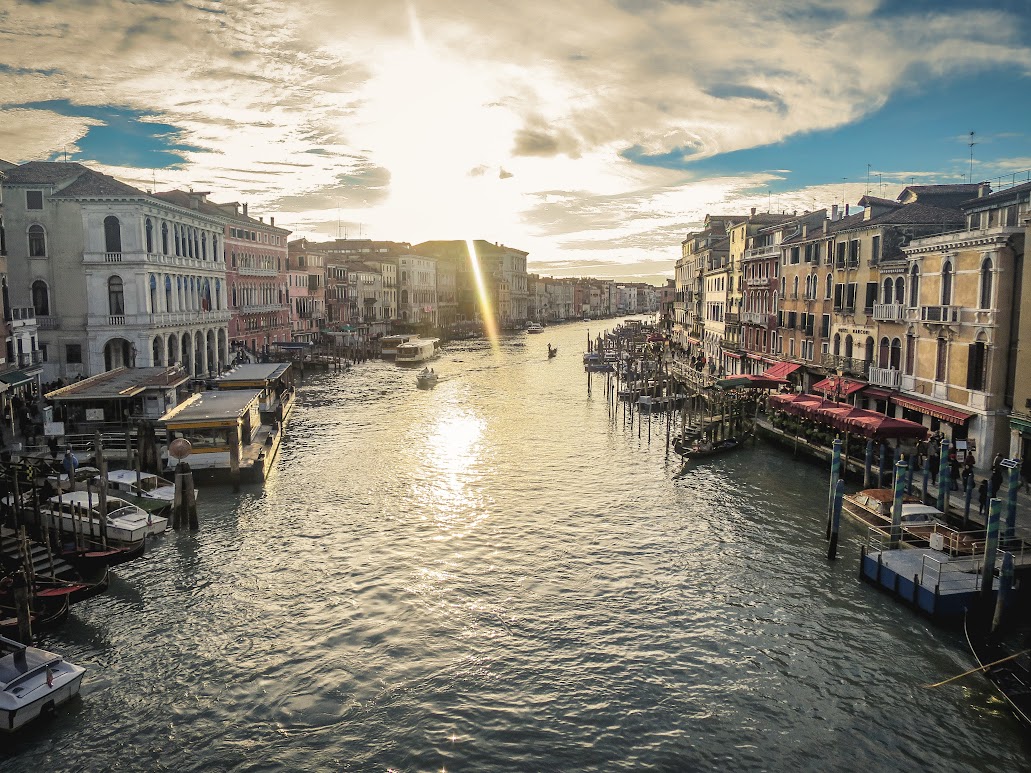 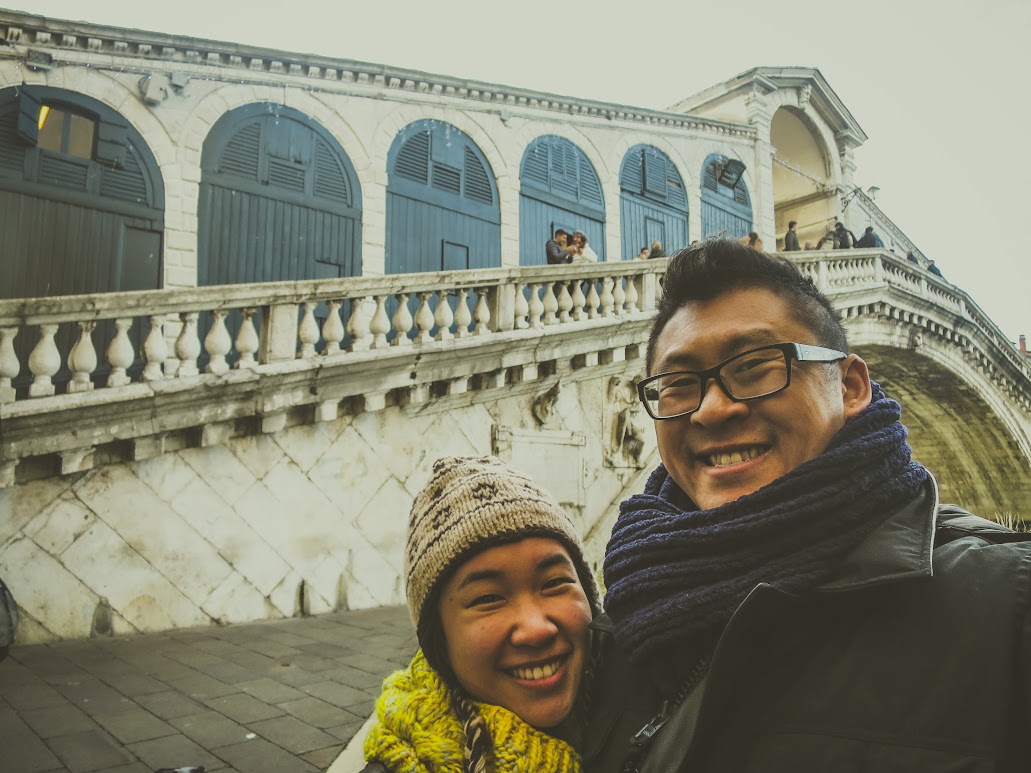 San Polo and the Rialto

After grabbing lunch in Castello, possibly the best meal we had in Italy, we made our way over to the sestiere of San Polo, on the other side of the Grand Canal. Spanning the venerated water way is the iconic Rialto Bridge, the oldest existing bridge across the canal, completed in 1591. The Venetian Republic was unparalleled in its single-minded pursuit of trade and wealth. Its vast navy and overseas territories, collectively referred to as the Stato da Mar, Domains of the Sea, were all for the purposes of ensuring a Venetian monopoly on eastern Mediterranean trade routes. Thousands of merchant ships plied the waters of the Adriatic, the Aegean, the Black Sea, and the Levantine Sea, protected by Venetian naval convoys and supplied and maintained by its overseas network of shipyards and supply stations. The lucrative overland trade routes from China, India, Central Asia, and interior Africa were connected to Venice through its jealously guarded shipping lanes, and the grand terminus that linked together the kingdoms of the known world was San Polo and its bustling marketplace. Merchants from the rest of Europe would gather in San Polo to marvel and conduct trade with Venice’s bounty, enriching the coffers of the Republic and funding the creation and maintenance of the Republic’s maritime lifeline. 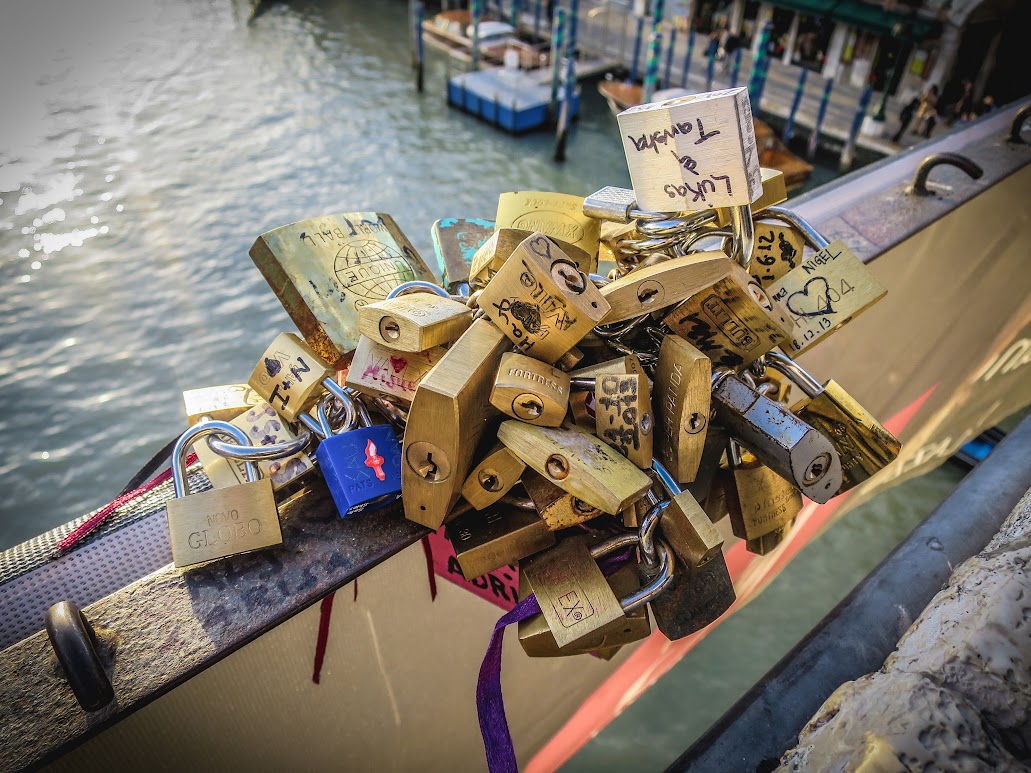 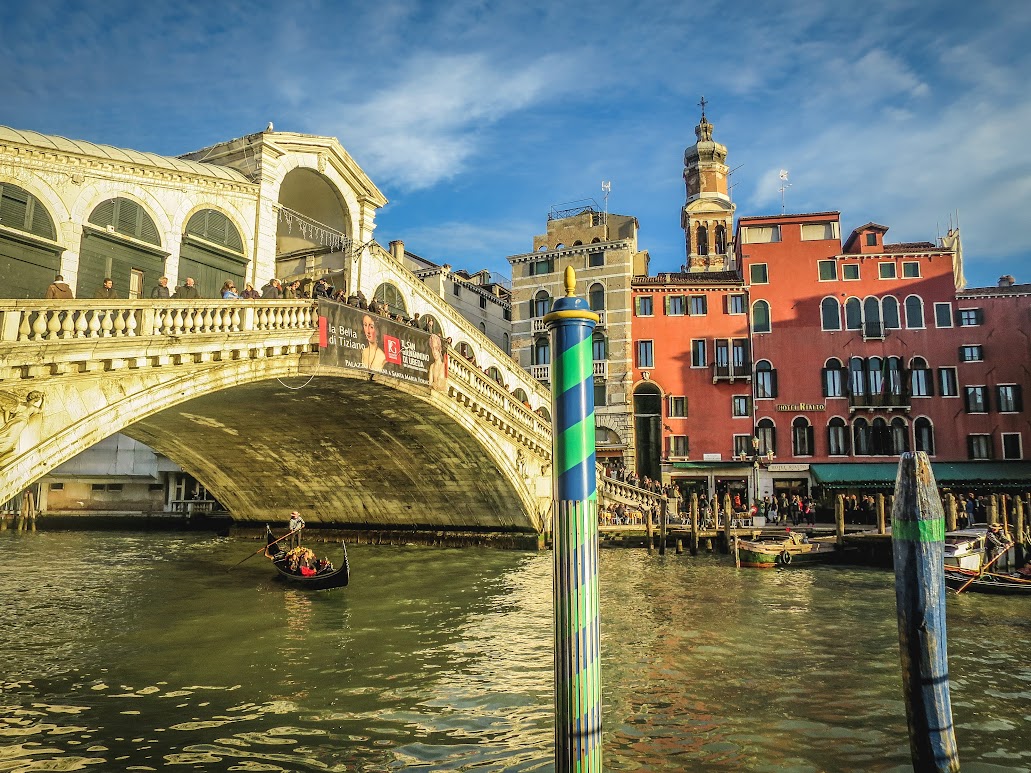 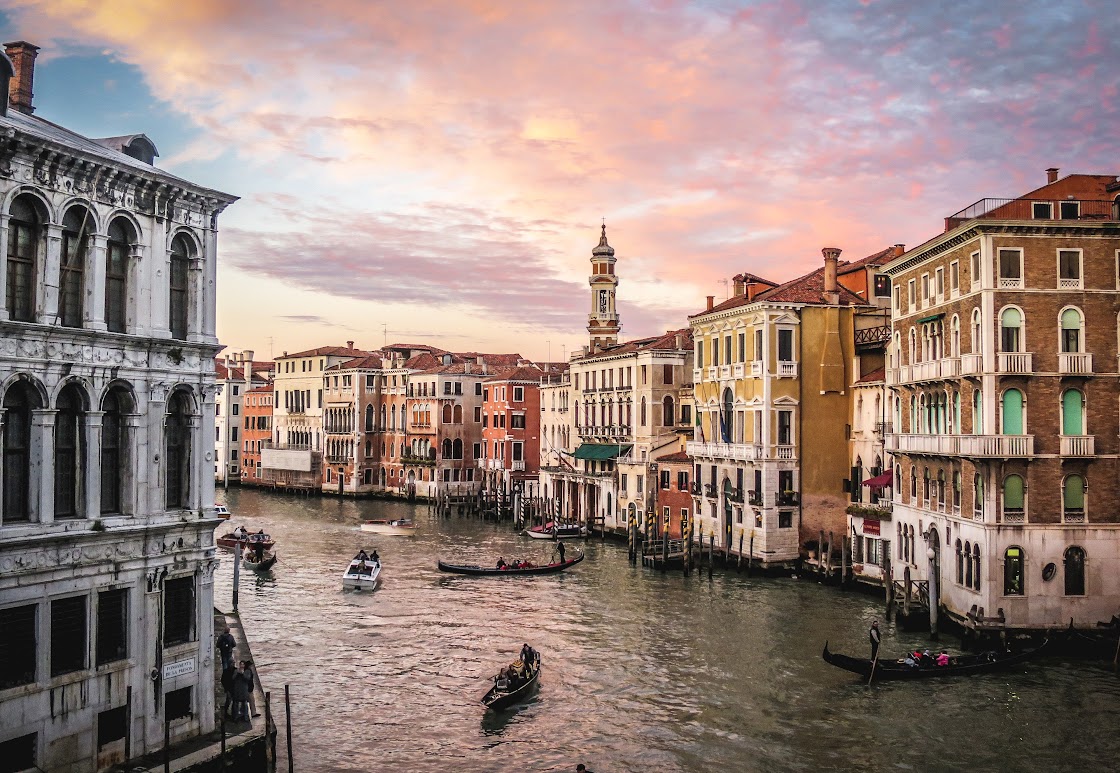 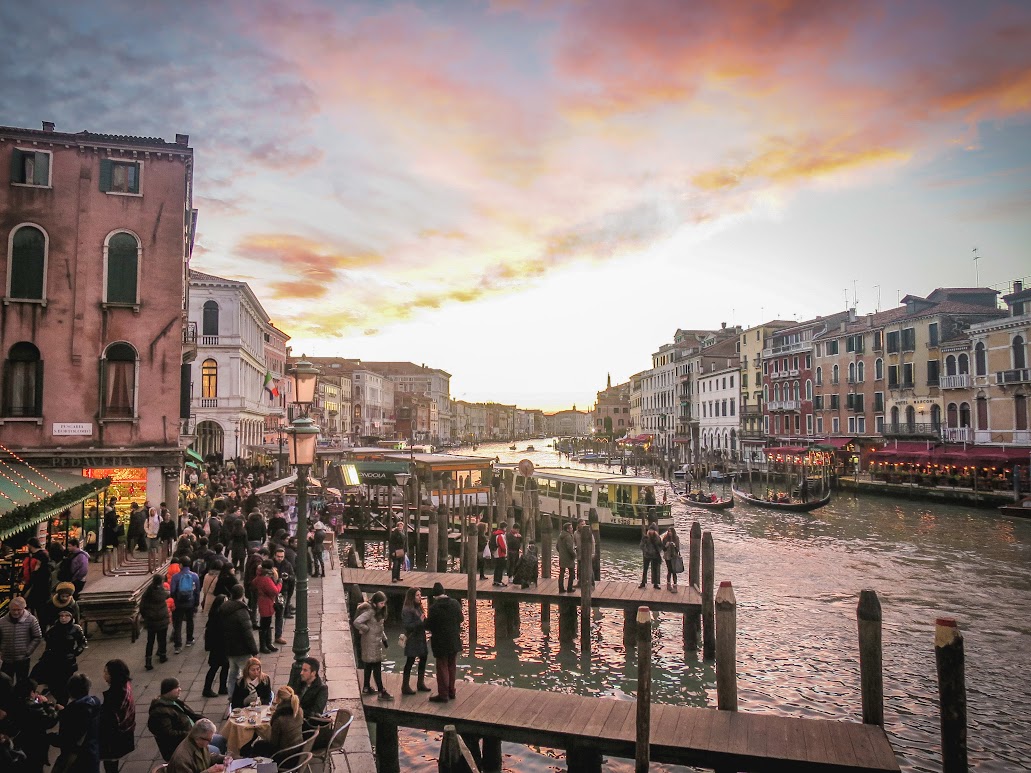 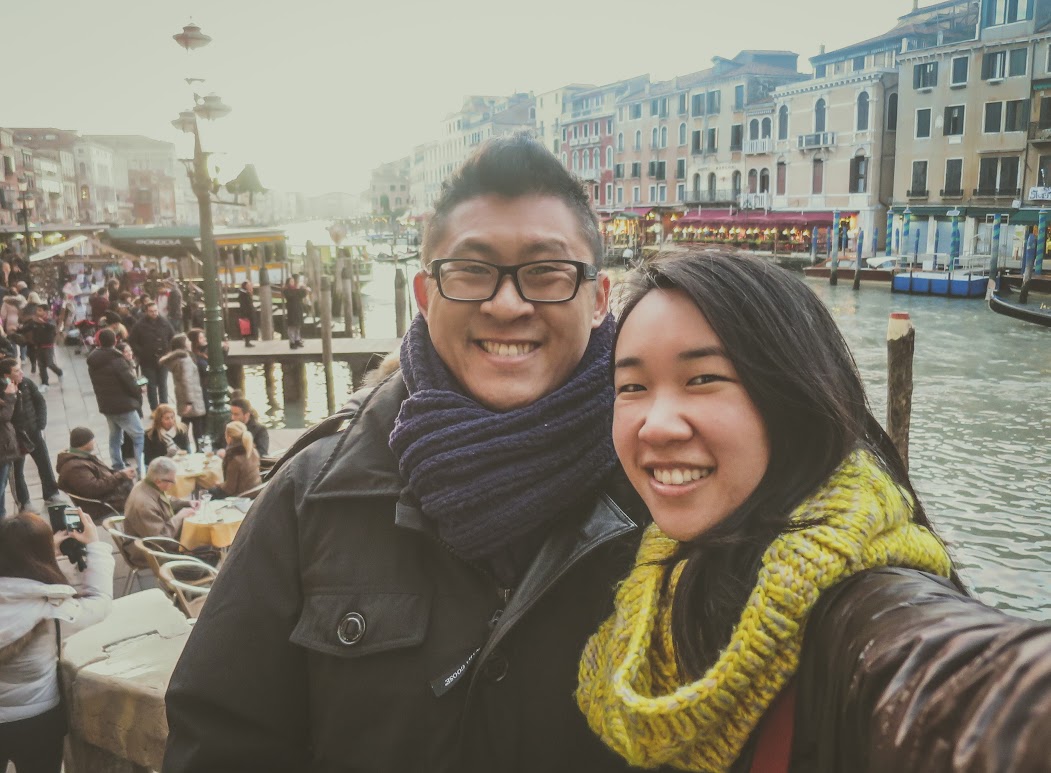 The Sun Sets on the City

After wandering through San Polo in the afternoon, we crossed back over the Grand Canal at the Ponte dell’Accademia into San Marco. We walked along the canal in the direction of the Rialto Bridge, just as the golden hour began its timeless magic in the skies. The warm tones of the setting sun washed over the city, the light pink and purple brush strokes above us finding their match in the orange and beige buildings on either side of the water. The sunset of the Serene Republic was a decidedly less serene affair, involving plagues, warfare, religious and political maneuvering, and, perhaps most significantly, the bold explorations at the margins of the medieval map. The Age of Discovery, initiated by the Spanish and the Portuguese in the late 15th century, threatened Venice’s position as the sole arbiter of Mediterranean trade. The aggressively expanding Ottoman Empire deprived Venice of many of its overseas territories from the 15th to the 17th centuries, while repeated epidemics decimated the population. The rising influence of continental powers within the Italian peninsula reduced the Republic’s political capital even further, so that, by the end of the 18th century, it was but a pawn in the geopolitical chess matches north of the Alpine passes. Finally, in the spring of 1797, the forces of Napoleonic France and the Austrian Empire carved up the remaining Venetian territory, and, on May 12, the Major Council of Venice declared an end to the Republic. After 1000 years of independence, of incomparable wealth and power and influence, the sun had finally set on La Serenissima. Ashley and I watched the sunset from the Rialto Bridge, admiring the subtle shifts in light and shadow along the Grand Canal, before heading into the sestiere of Dorsoduro. 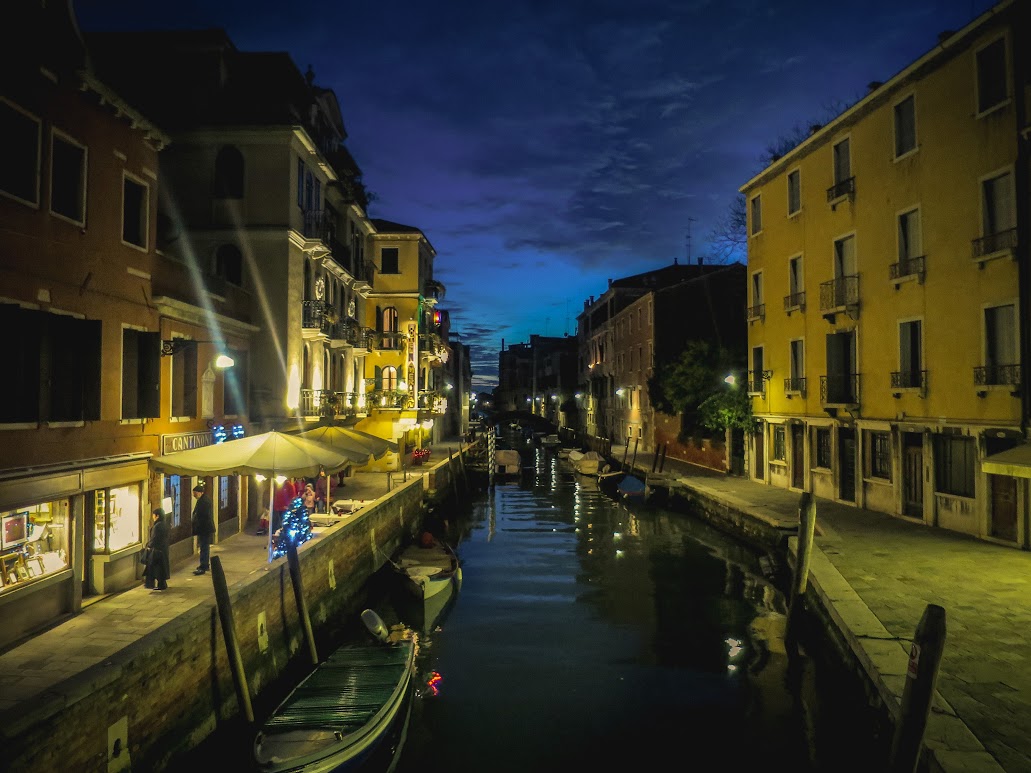 Where Venice was once powered and kept afloat by its monopoly on European trade, it now relies heavily on tourism to power its economy. This has had a bit of a double-edged sword effect on the city, as the economic benefits of increasing tourism are weighed against the deleterious effects of overcrowding, gentrification, and environmental degradation. The sestiere of Dorsoduro offers a reprieve from the often crowded plazas and museums of St. Mark’s Square and other Venetian hot spots, just across from the Grand Canal. Its quieter neighbourhoods house some of the city’s hippest dining and art spaces, a refreshing breath of life in a city that is so often defined by its elegant decay. It’s true that Venice is a beautifully preserved city, a living museum seemingly untouched since its days of glory and power. It’s also true that Venice as an urban space has continued to evolve and shift, even as it seems to serve the whims of the powerful tourism economy. It’d be a shame if all one saw of Venice was its faded glory and decadent beauty – there is life here too. 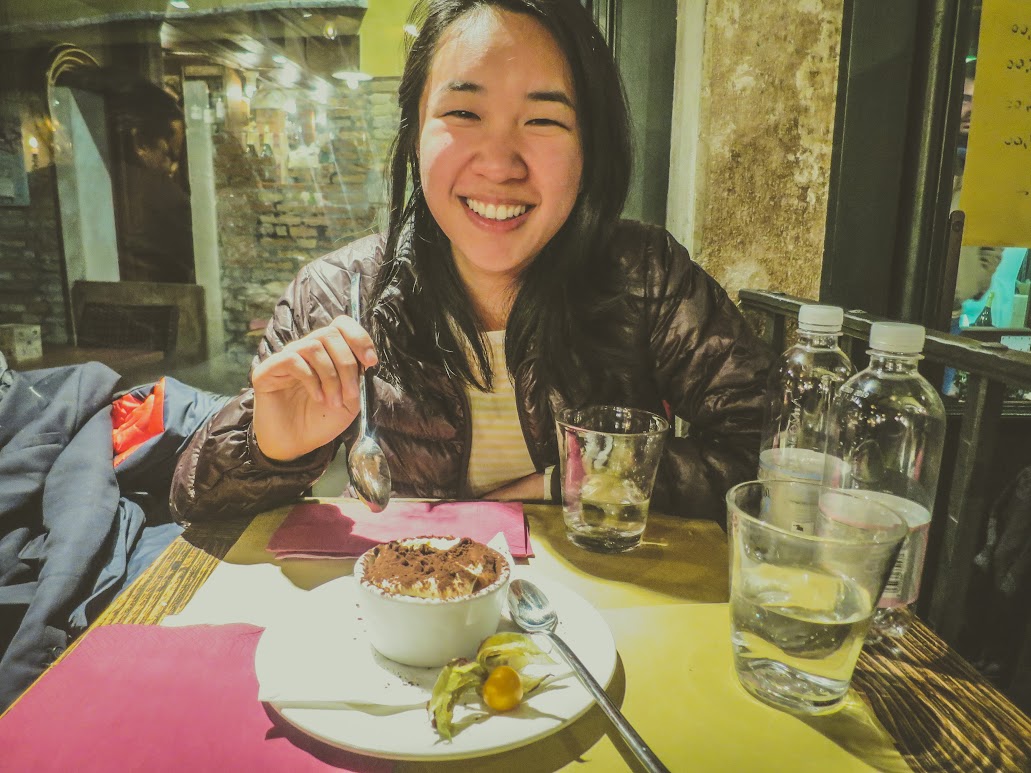 Back to the Mainland

Ashley and I grabbed a quick bite in Dorsoduro, surrounded by young students from the nearby Ca’ Foscari University of Venezia. The evening was pleasant, if a bit chilly, and after dinner we walked through the sestieri of Dorsoduro and Santa Croce, the westernmost district of Venice. The sestiere of Cannaregio was our end goal, home of the Santa Lucia railway station and the city’s link to the mainland. For centuries, Venice’s island status shielded the Republic against the predations of the medieval and Renaissance Italian city states, allowing it to focus its eager gaze outward towards the sea.  Now, the terrestrial link created by the railway bridge and the Ponte della Libertà is the city’s lifeline, cementing Venice’s gaze back towards the mainland and the modern nation-state of Italy. The two of us crossed the Ponte degli Scalzi, the bridge linking Santa Croce to Cannaregio, taking one last look at the City of Bridges, before catching the evening train back to fair Verona. 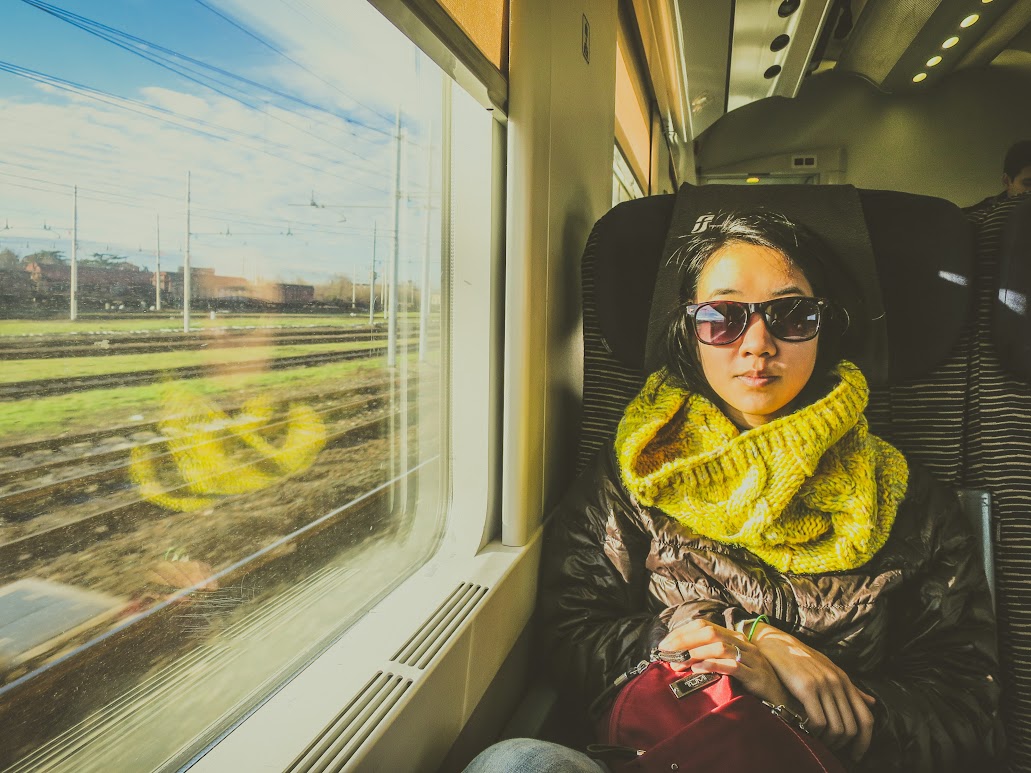