As our first anniversary approached, Ashley and I began thinking about where we could go for a quick weekend holiday to celebrate. One of the nice things about living in Hong Kong is the number of destinations you can get to within 3.5 hours, whether you want to explore a new city, lie on a tropical beach, or indulge in history and culture. After much consideration, we decided on Bangkok, with its beautiful temples, delicious food, and relaxing massages, and quickly booked our flights and hotel. This would be my first time in Thailand, though not for Ashley, and we knew a single weekend was barely enough time to spend in the city. At most, we’d hardly be scratching the surface, but we went into the holiday with the simple expectation of eating well and having fun together. 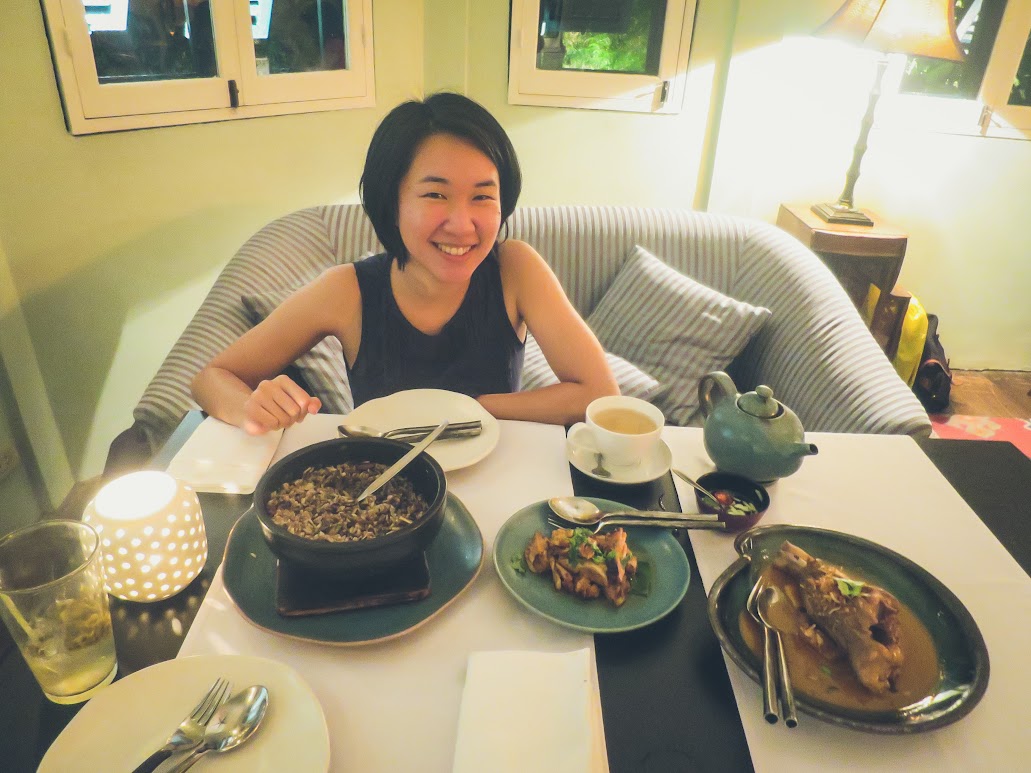 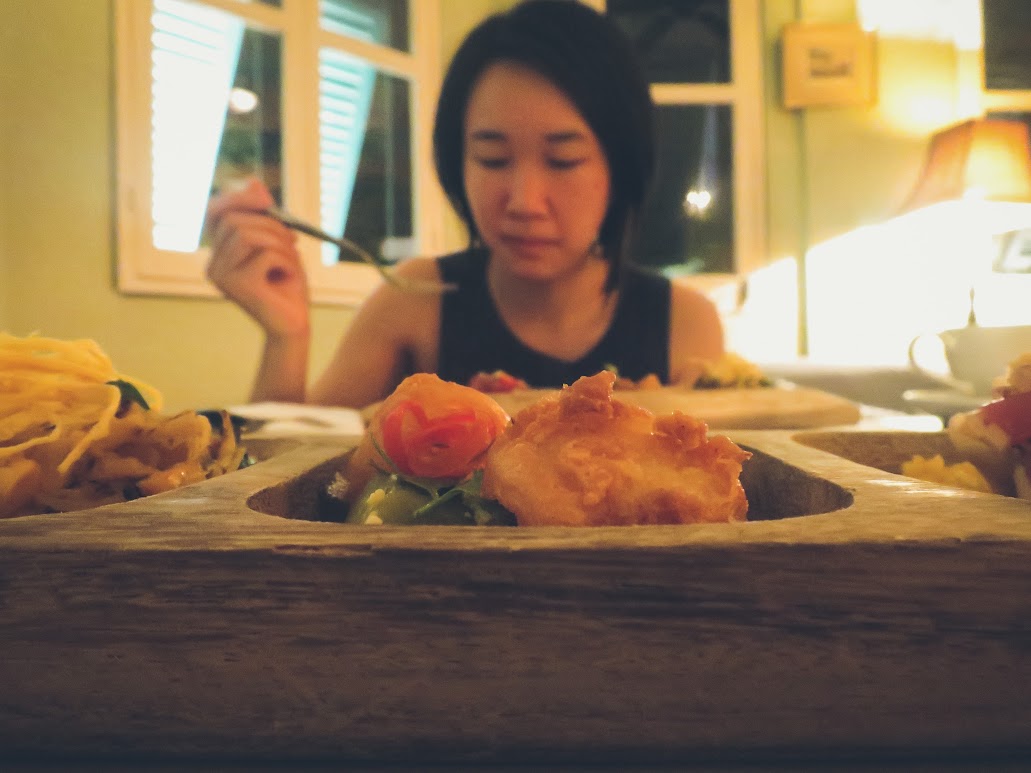 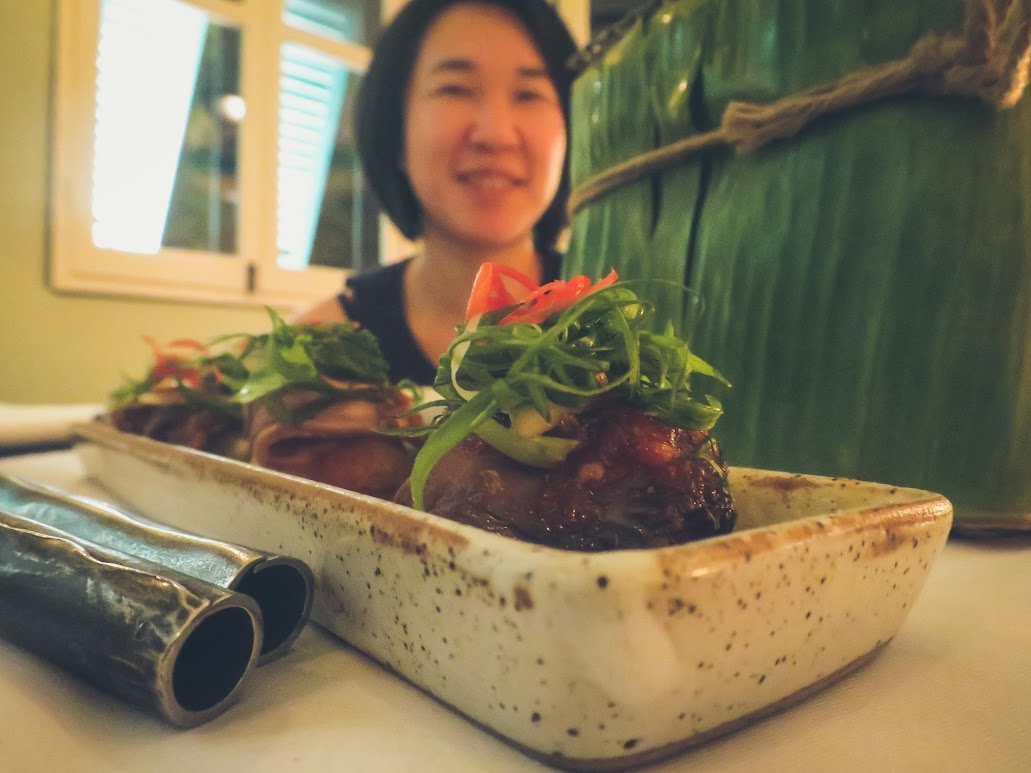 We arrived around mid-day and checked into our room at the Banyan Tree Bangkok, a luxury hotel located in Bangkok’s Central Business District. Our first stop was a quick afternoon massage at the Urban Retreat branch outside the Asok Sky Train Station, before grabbing dinner at the Issaya Siamese Club, named one of the top 50 restaurants in Asia in 2015. Issaya is located inside of a two-story, 100-year-old, Thai villa, surrounded by a tropical garden and walled off from the rest of the quiet neighbourhood. Inside, the decor was warm and familiar, like we were sitting in someone’s living room, and it had a bit of a colonial feel to it. Ashley and I ordered one of the set menus, which included Koo Kradook Moo Aob Sauce (Spice Rubbed Pork Baby Back Ribs Glazed with Issaya House-blended Chili Paste), Yum Hua Plee (Banana Blossom and Heart of Palm Salad, Crispy Shallots and Roasted Peanuts in A Chili Jam Dressing), Yum Nua (Imported Tender Beef, Fresh Herbs, Organic Vegetables in A Charred Bird’s Eye Chili Vinaigrette), and Kanom Dokmali (Jasmine Flower Panna Cotta Served with Jasmine Rice Ice Cream and Jasmine Rice Tuile). The meal was fantastic, probably one of the best I’ve ever had, and Ashley and I have been passing on the recommendation ever since. 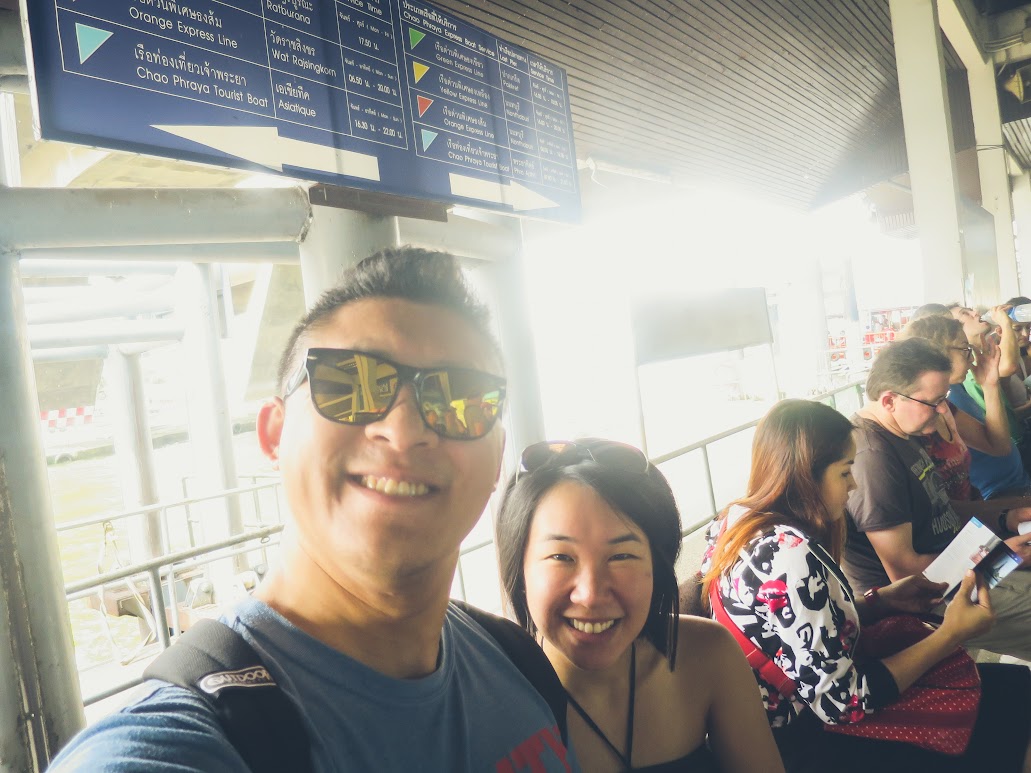 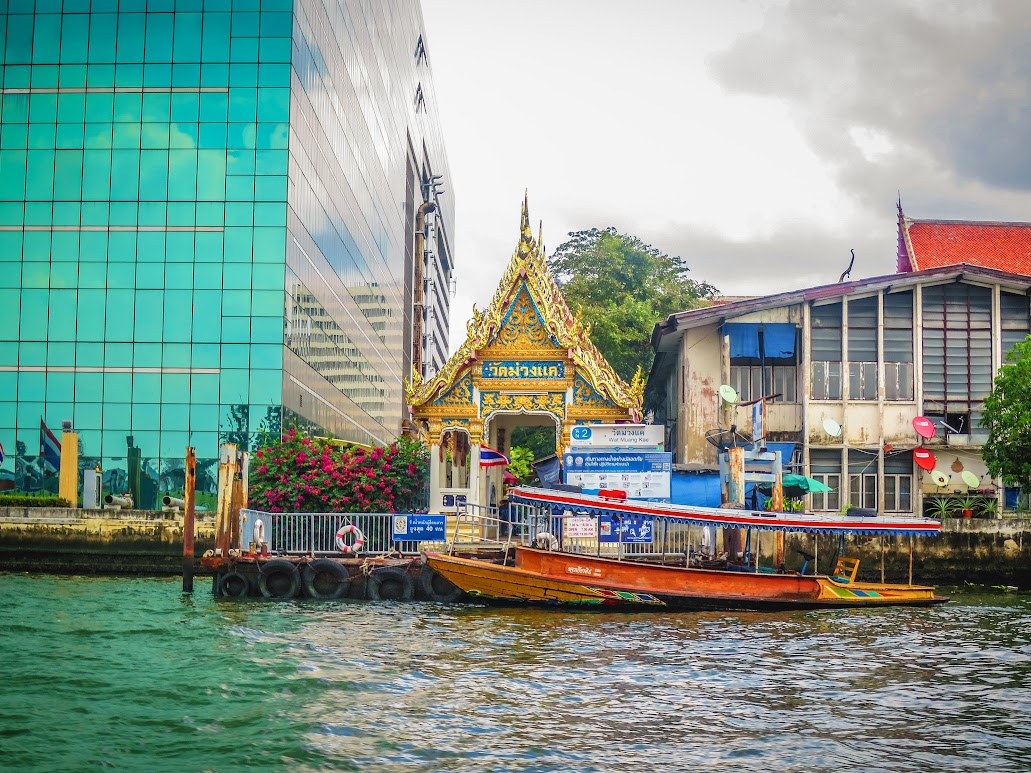 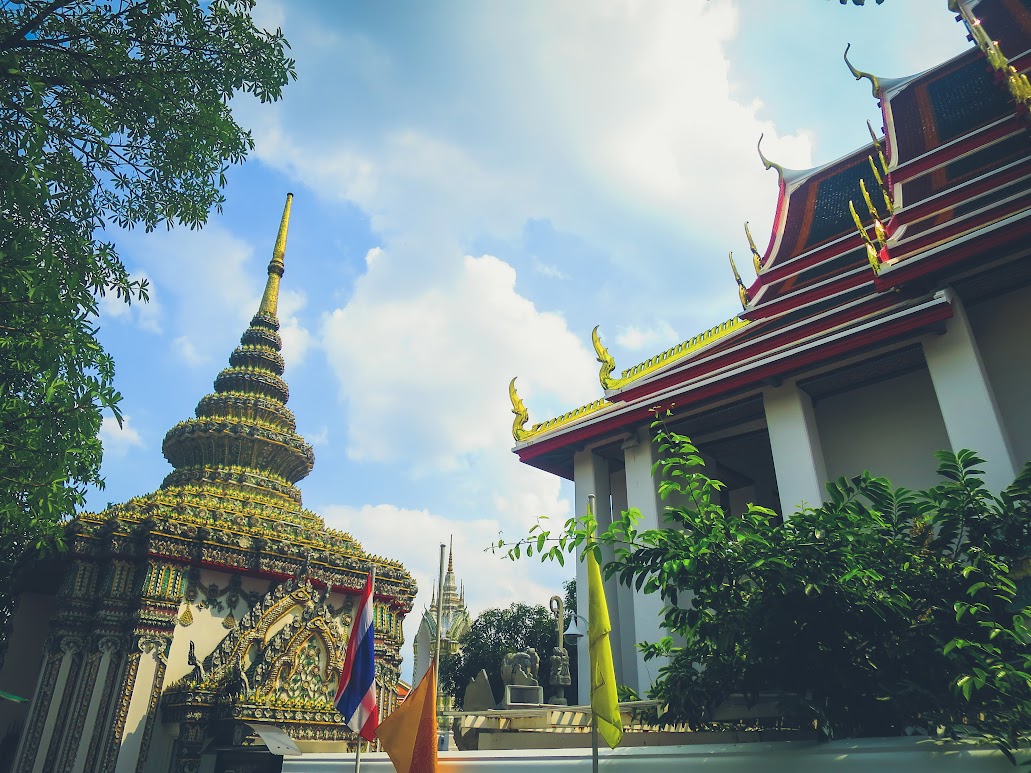 The next morning started out grey and misty, and we took the Sky Train to Saphan Taksin Station, where the King Taksin Bridge crosses the Chao Phraya River. Underneath the bridge is a series of ferry piers that provide transportation up and down Bangkok’s waterways, and we caught the Express Boat heading north to get a peek at the cultural heart of the city. The route stopped at various piers and hotels along the way, before arriving at the Wat Pho temple complex, also known as the Temple of the Reclining Buddha. It is one of the oldest temples in Bangkok, and one of only six temples in all of Thailand occupying the highest class of royal temple, as well as the traditional birthplace of Thai massage. Ashley and I weren’t particularly interested in paying the entrance fee, so we walked around and looked at it from the outside. 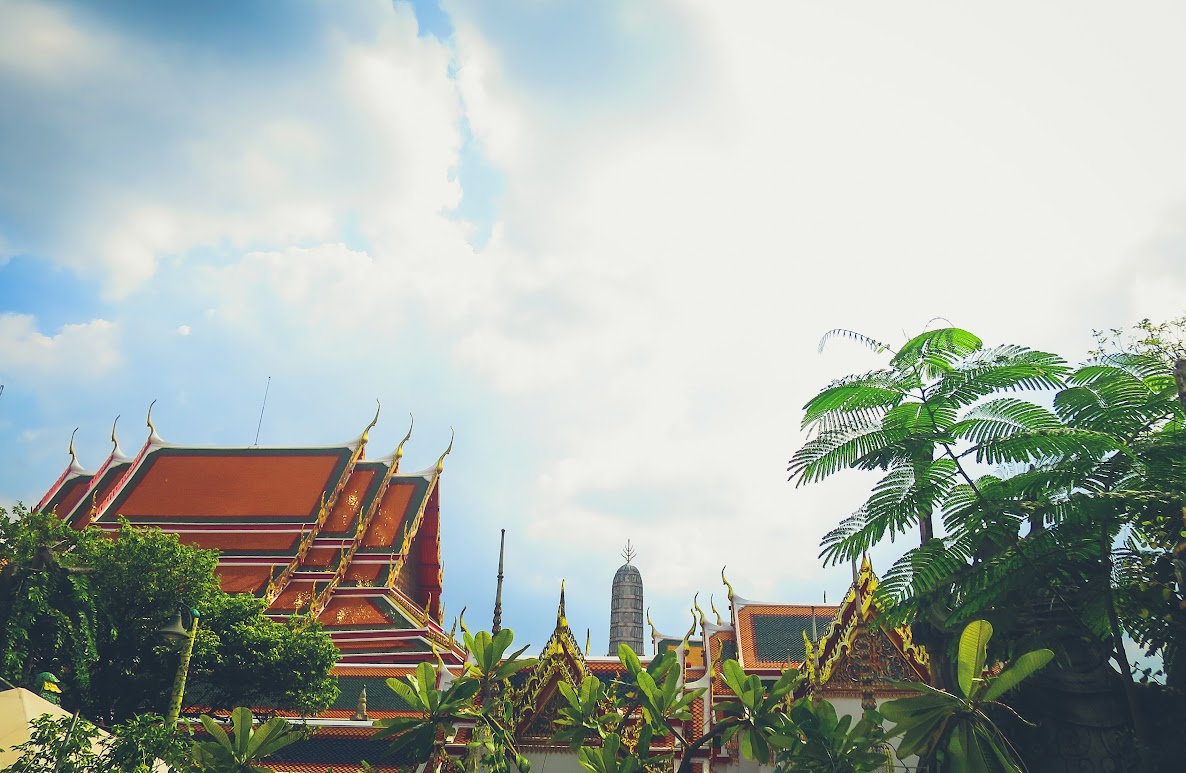 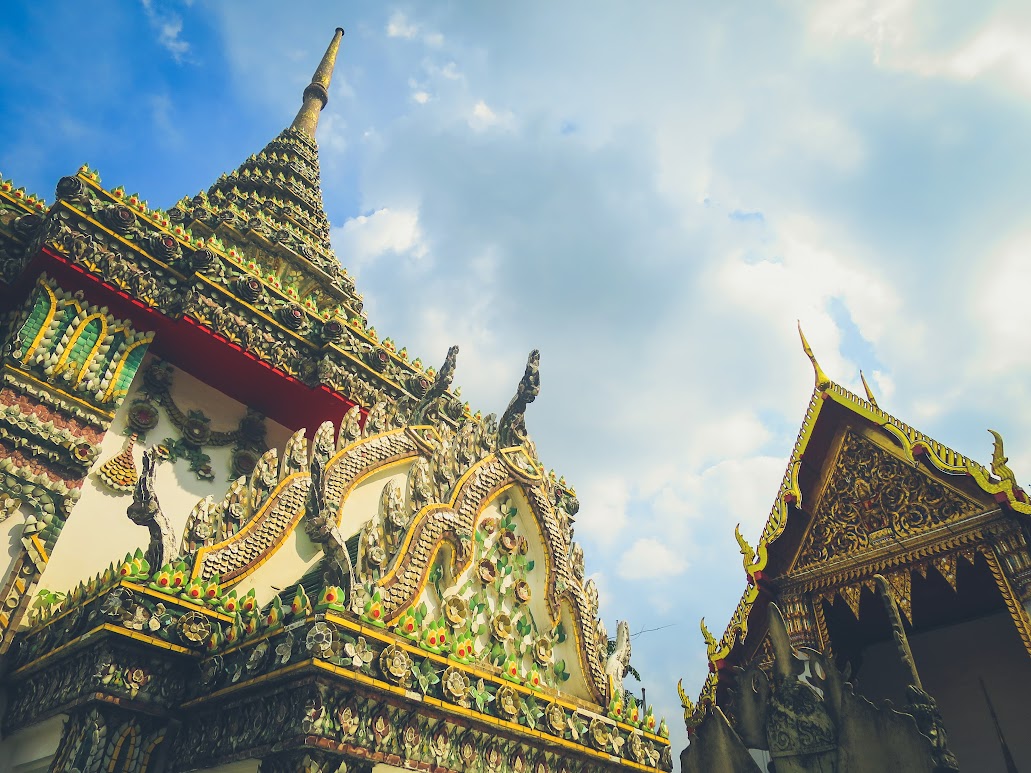 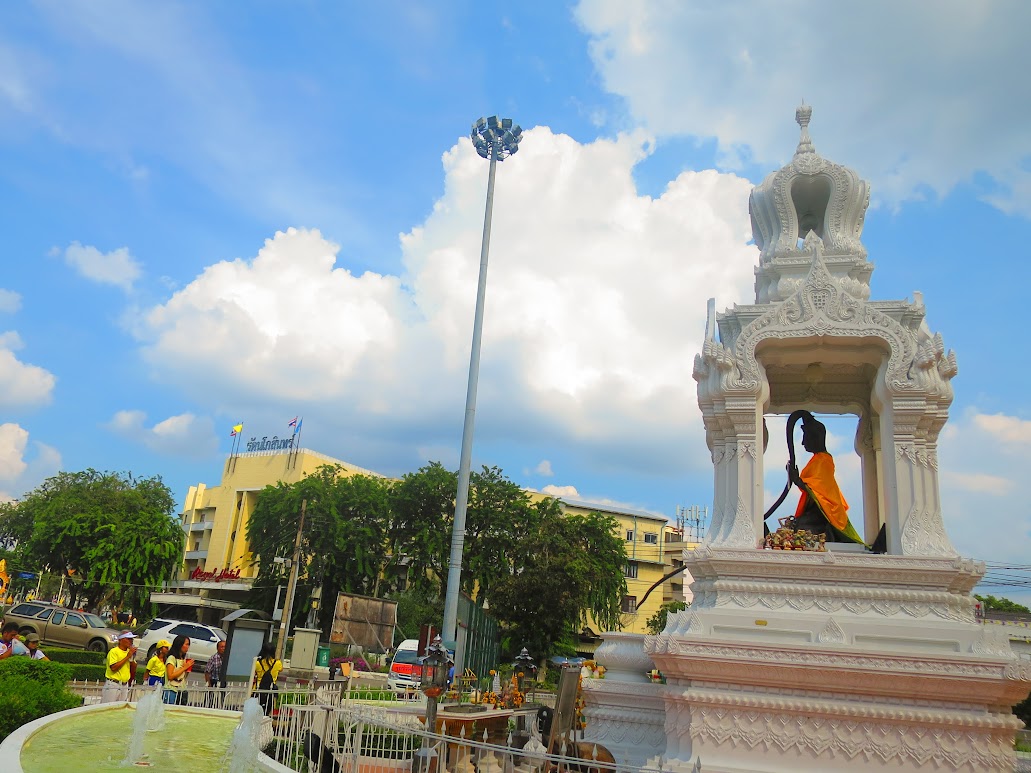 From The Palace to Khaosan Road

From Wat Pho, we walked up Sanam Chai Road, passing by the Grand Palace of Bangkok, where the kings of Siam and Thailand ruled from 1782 to 1925, and the Sanam Luang, a vast open field that plays host to various royal ceremonies throughout the year. By this time, the clouds had retreated almost completely, and the heat of the tropical sun intensified as it shone down from clear blue skies. Our last stop was Khaosan Road, the legendary backpacker ghetto, and a major terminus in the Southeast Asia backpacking circuit for decades. We were visibly wilting in the city heat when we emerged on the other side, and it was an easy decision to wave down a nearby taxi and head back to the air-conditioned refuge of our hotel. 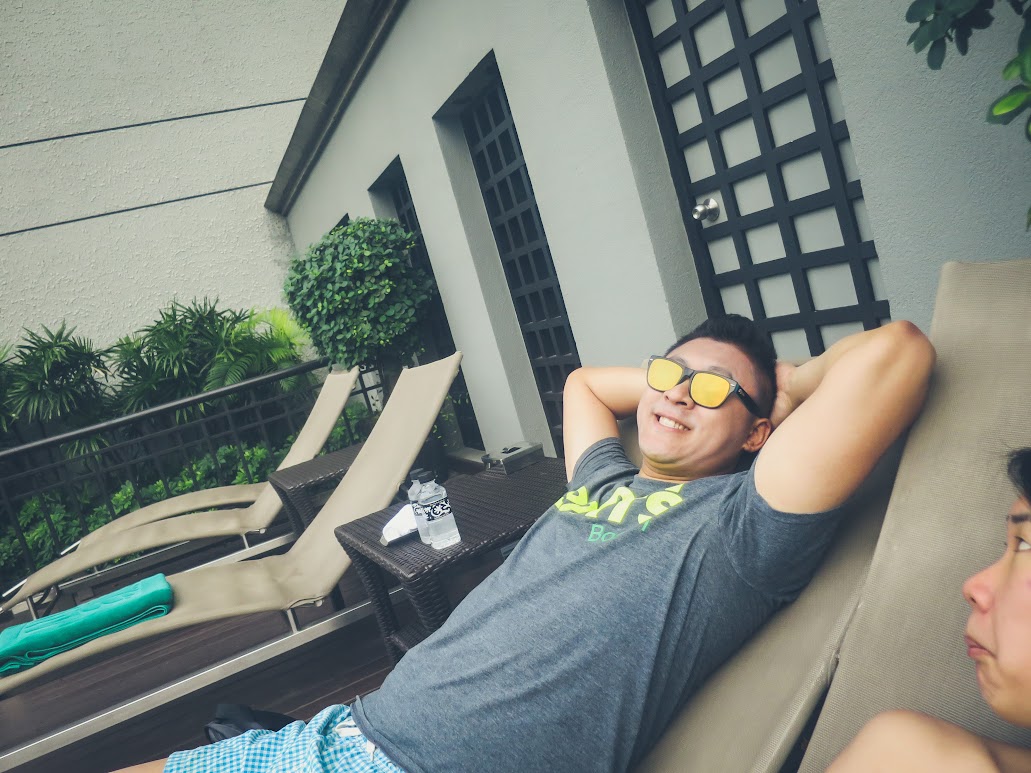 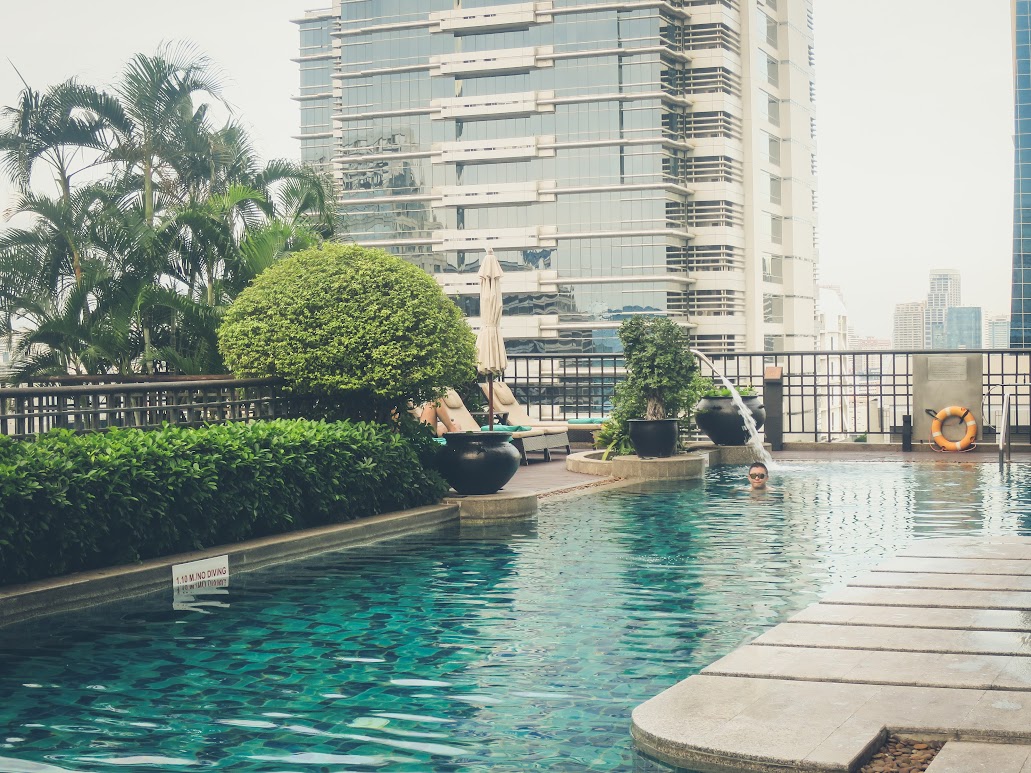 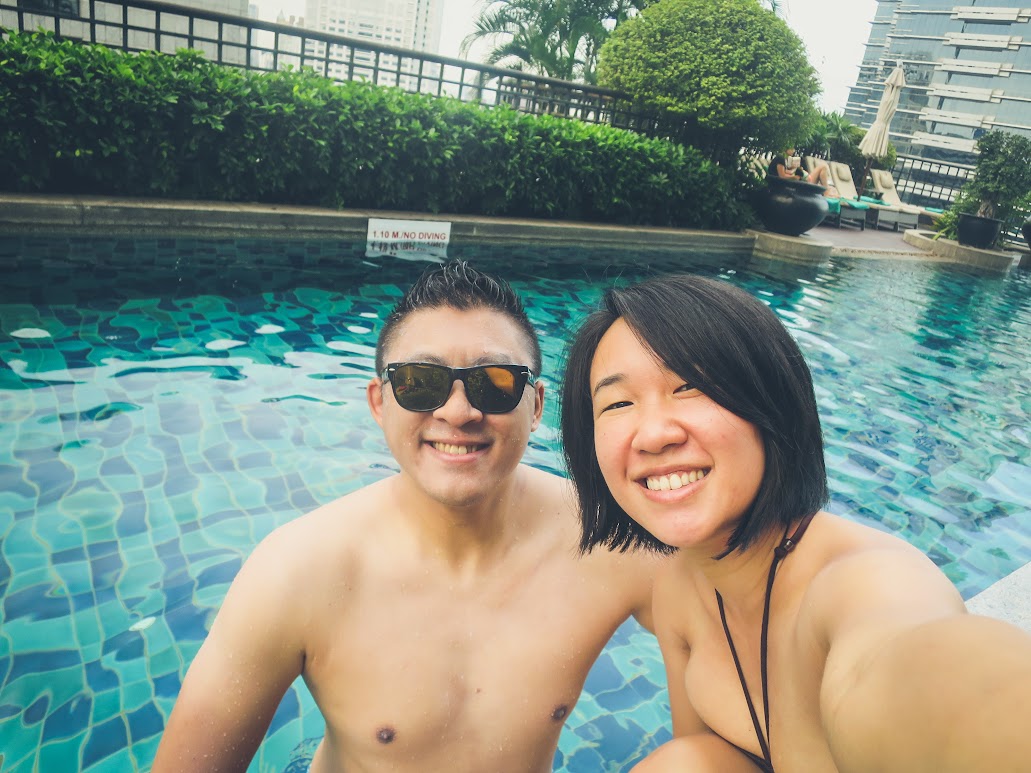 The rest of our afternoon was spent lounging by the hotel pool, as the hotels and offices around us slowly lit up in anticipation for the night. We had the small outdoor pool terrace on the 21st floor mostly to ourselves, and we swam and napped in relative privacy until the sun went down. Ashley and I had done a lot of traveling in 2014, but rare were the moments when we could lie down in the sun and pay little heed to time or agenda. In general, we’ve preferred the kind of travel that involves walking around and exploring new places, rather than lying on a beach somewhere. Once in a while though, we’ll feel the urge to get away from the non-stop activity that defines so much of our lives in Hong Kong, and that afternoon was one of those times. 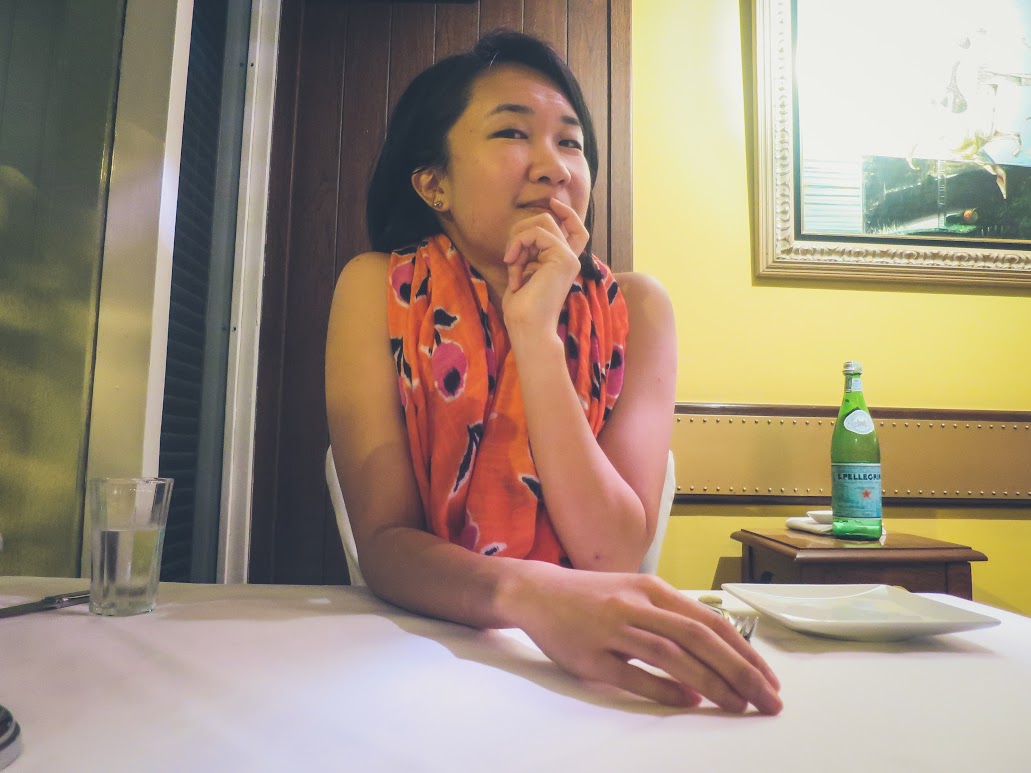 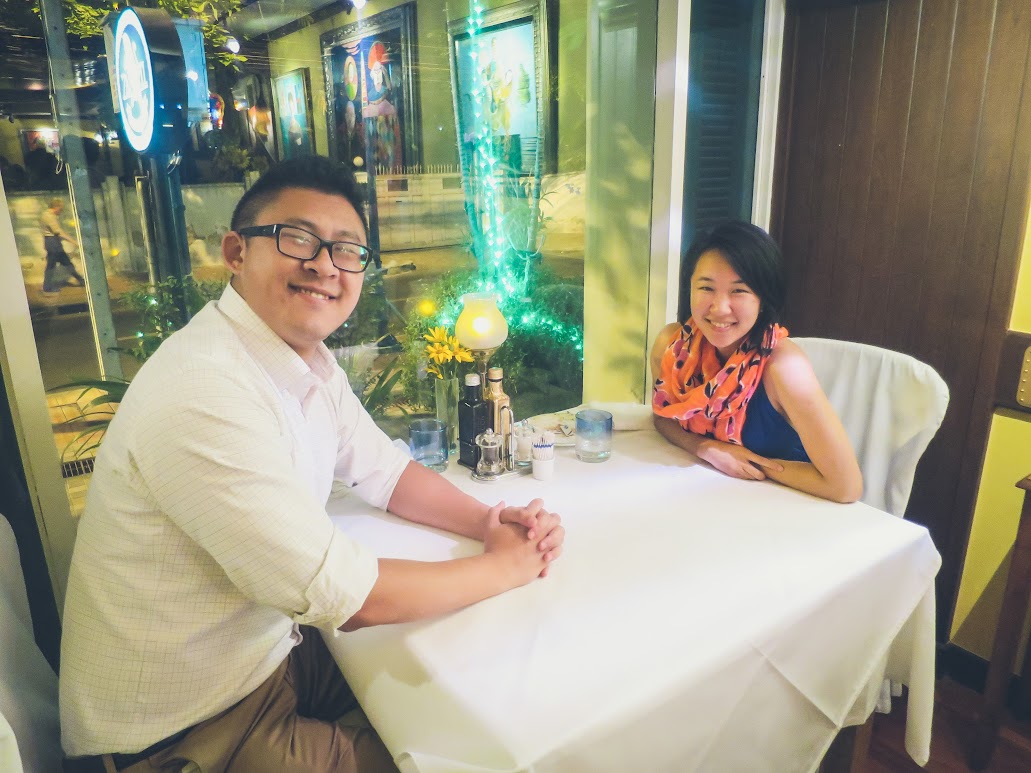 On our last night in Bangkok, we walked across the street to a nearby Italian restaurant called Zanotti Il Ristorante. It had been recommended to us by more than one person, but we had the sneaking suspicion that every other visitor from Hong Kong got the same Zanotti recommendation as well, as the restaurant had more than its fair share of Cantonese chatter. The food was decent – not especially praise-worthy, but not terrible either – but it definitely did not reach the heights of our meal at Issaya the night before. After dinner, we went up to the iconic Vertigo and Moon Bar on the roof of our hotel. Located 61 floors up, the sky bar provides incredible views of the city in all directions, and Ashley and I huddled in a corner with the rest of the evening crowd to admire the lights below. We flew back to Hong Kong the next afternoon, rested and relaxed from our weekend in the Thai City of Angels, and excited to take on the second year of our marriage. 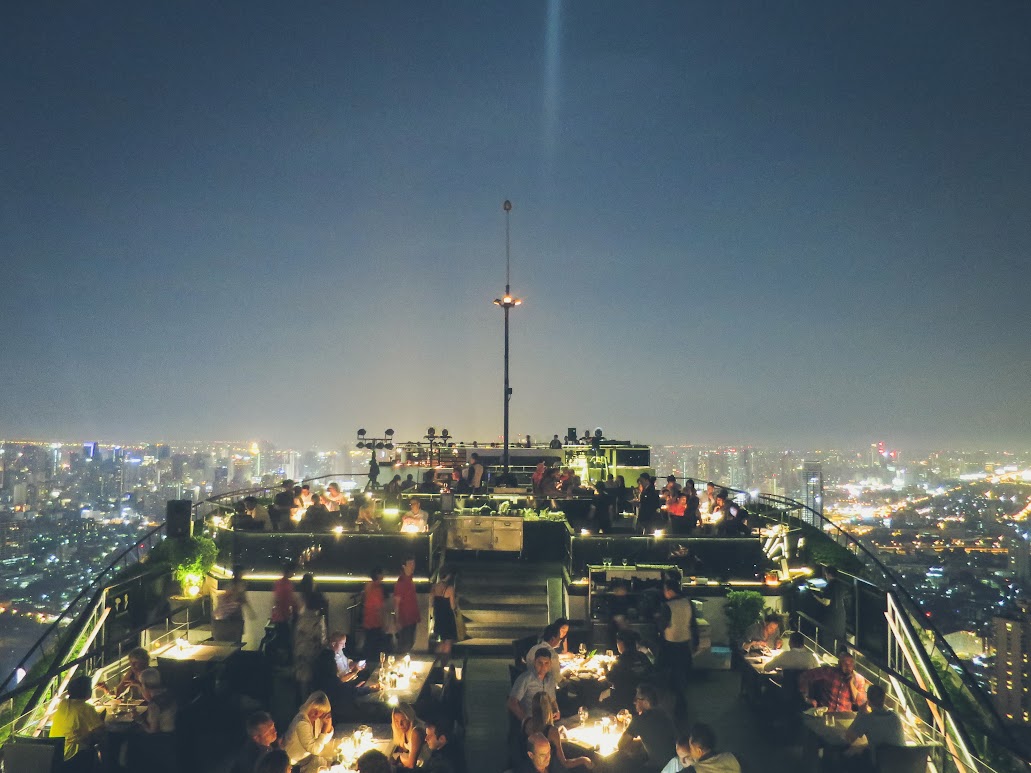