After struggling through the previous day’s travels in Montenegro with an upset stomach, it was with great relief that I woke up the next morning feeling much better. I was worried it might linger for a while, as illnesses have a habit of doing where I live in Hong Kong, but it seemed to have disappeared rather quickly overnight. We had a mostly blank agenda when we emerged from our Airbnb and shuffled into the sunny lanes and markets of the old town. The skies were blue, the morning breezes smelled faintly of the sea, and we soon joined the streams of tourists strolling up and down the wide stones of the Stradun. 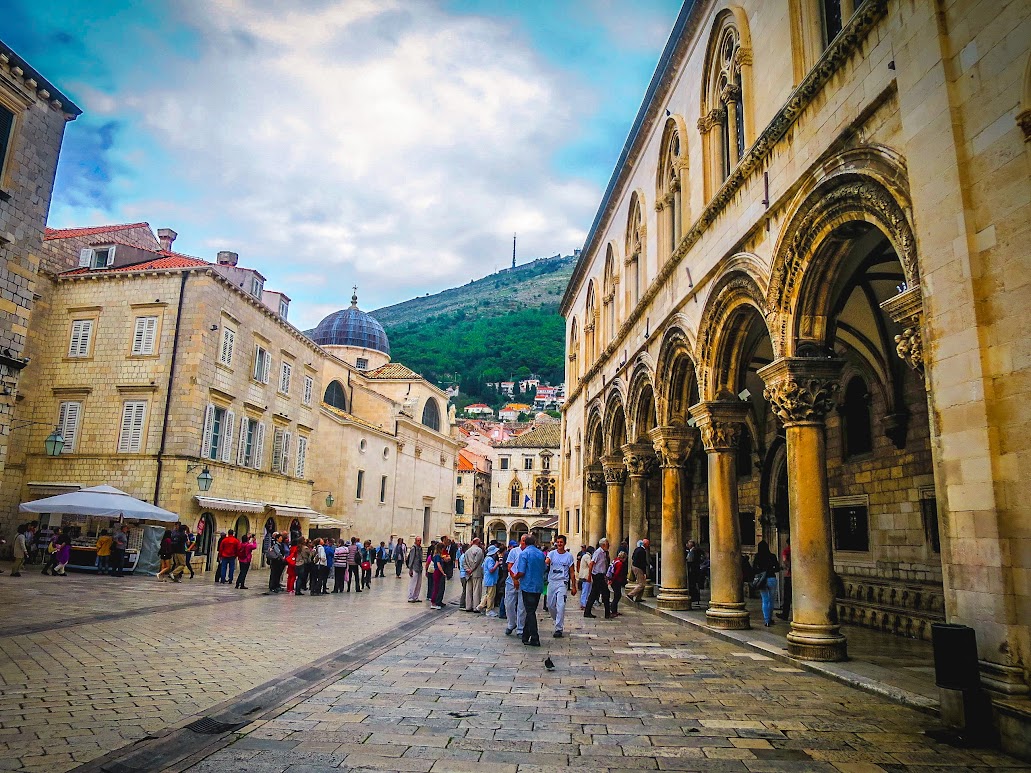 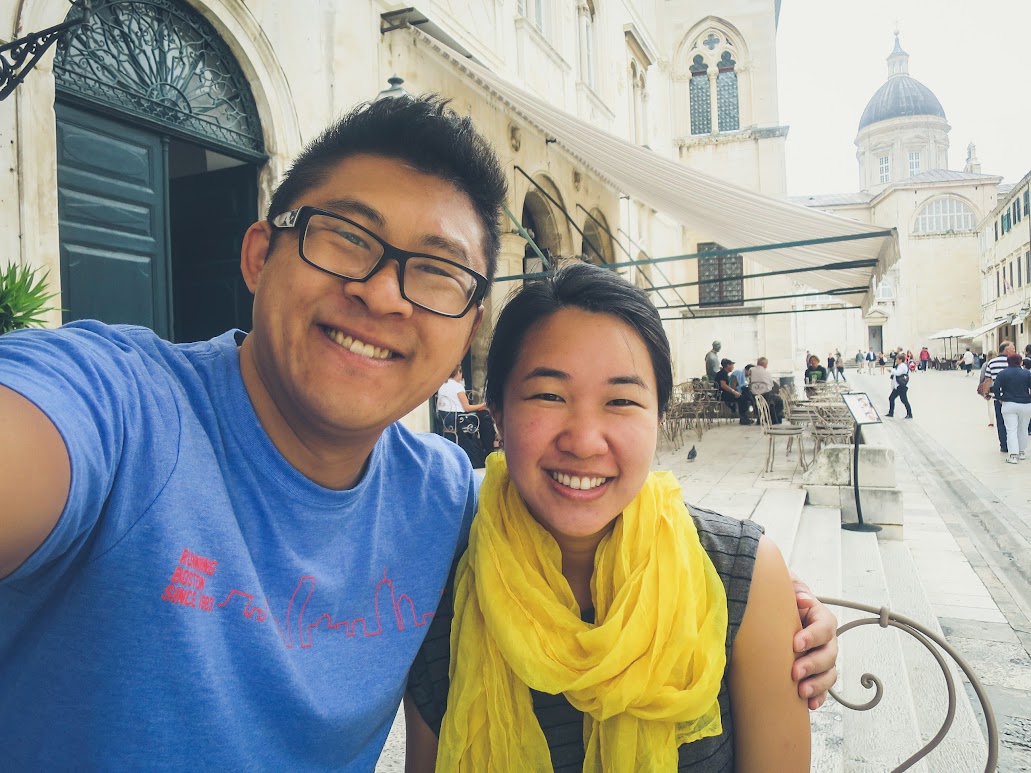 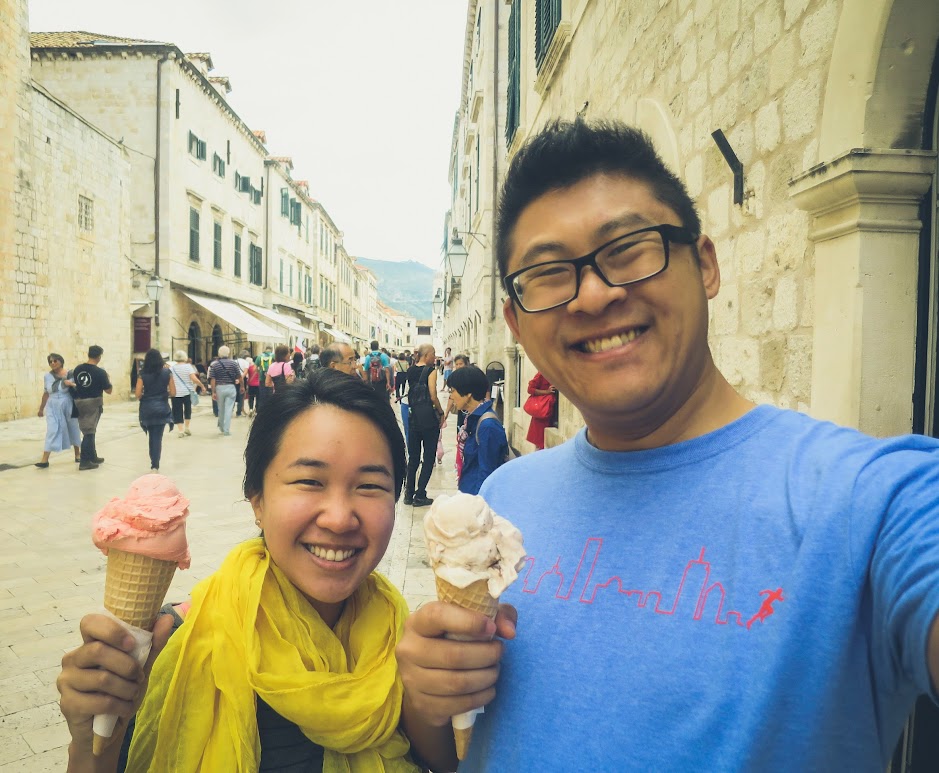 In recent years, Dubrovnik has become a popular port-of-call for cruises in the Mediterranean, and groups of off-shore passengers ambled quietly through the mostly empty morning streets. As the sun continued to rise, chipper young tour guides waved their little flags as retirees held hands and shared memories and gelato. A costumed man set up a row of wooden perches for his exuberant pandemonium of parrots, while a groom and his groomsmen serenaded his radiant bride looking out through an open window. Ashley and I found a table at an outdoor cafe, enjoying our simple breakfast and observing the comings and goings of a typical Dubrovnik morning, before ducking into a shop on the Stradun to indulge in a little gelato ourselves. 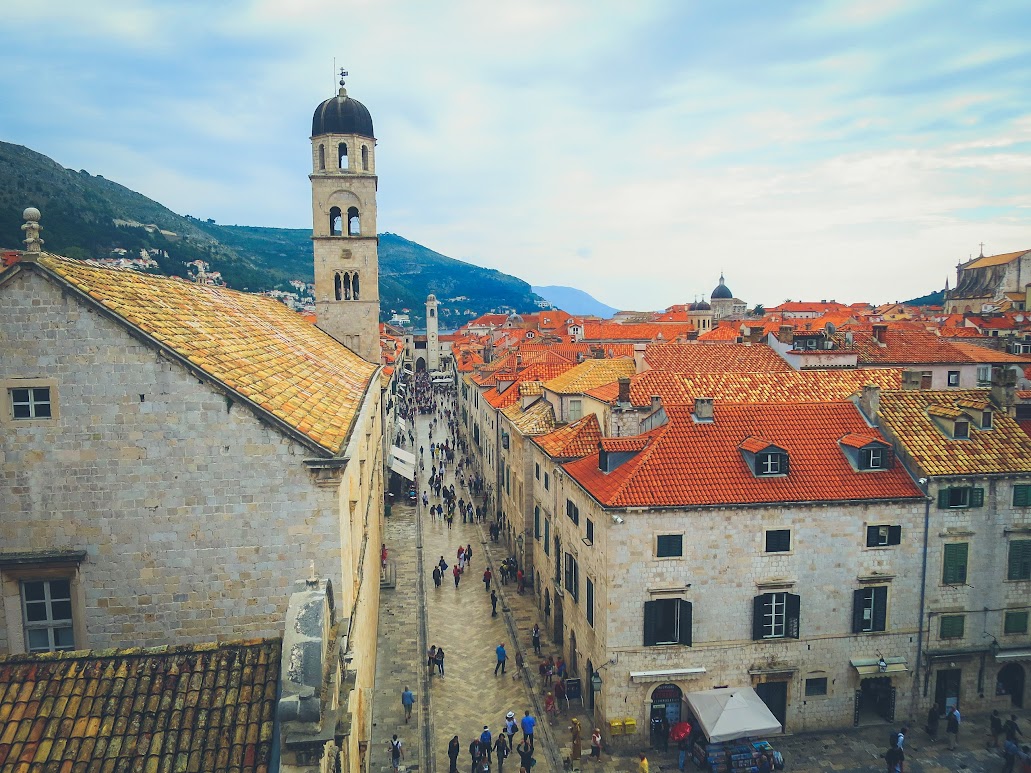 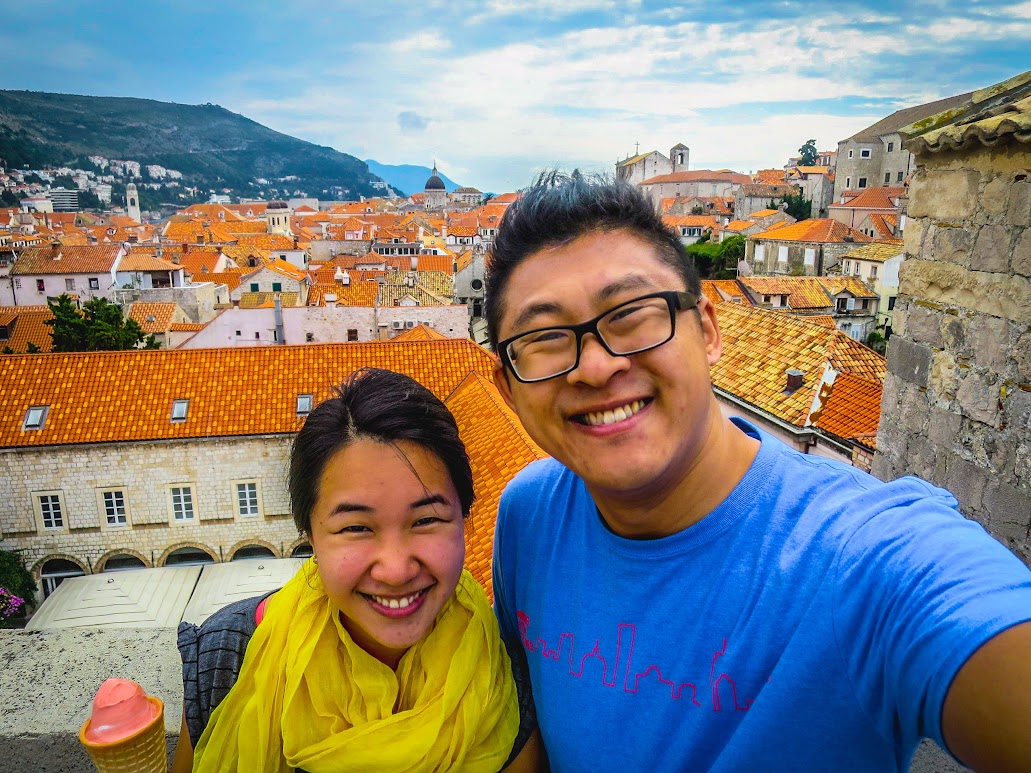 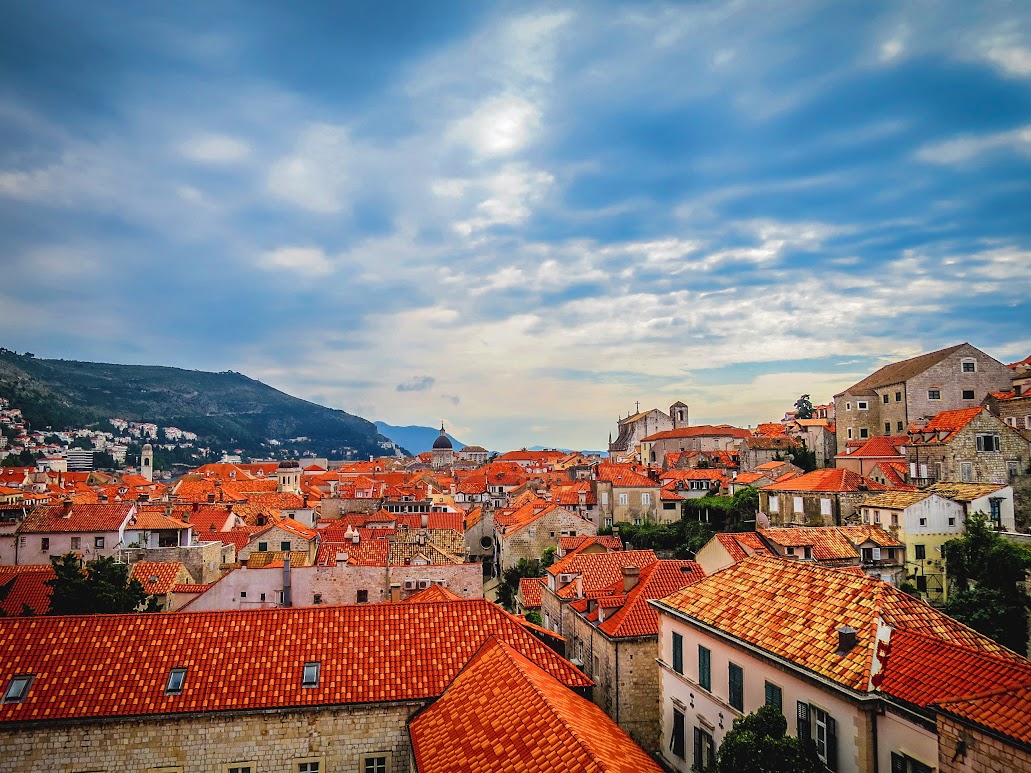 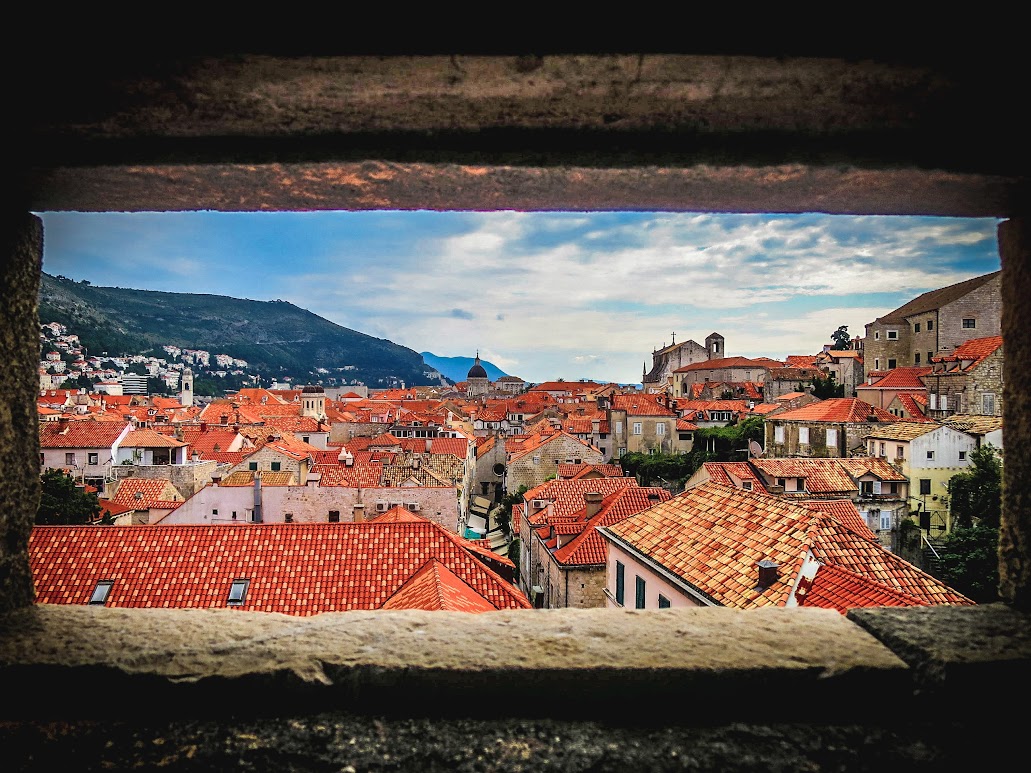 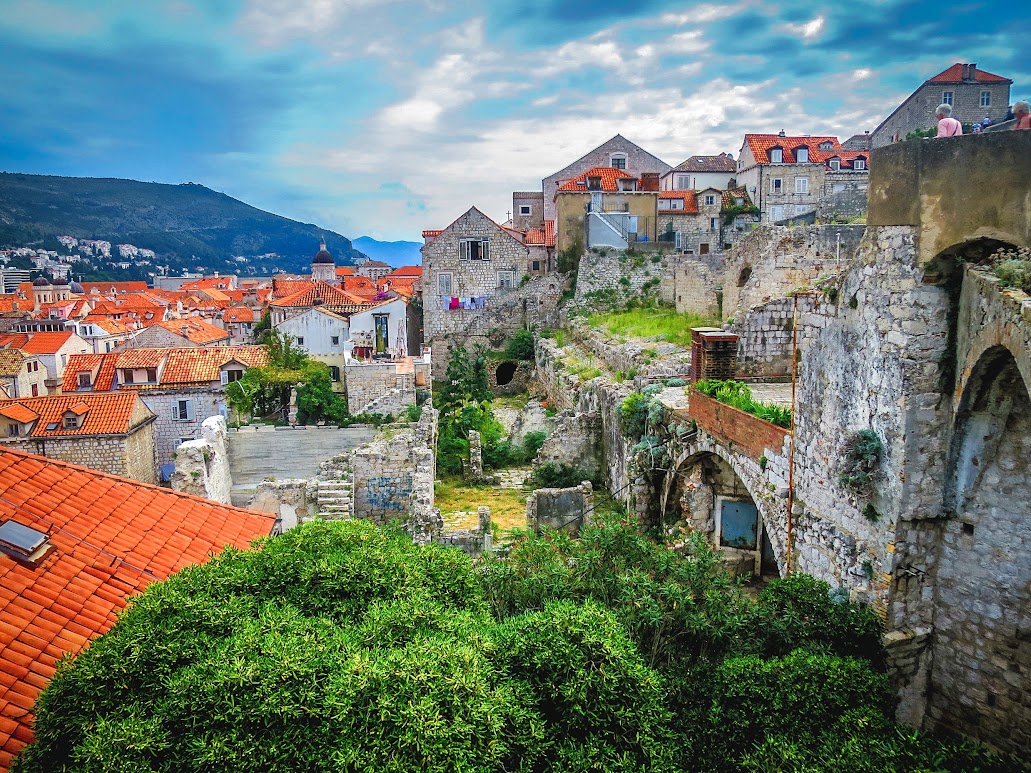 Dubrovnik’s claim to fame is the extensive fortification system that has protected the old town and the vibrant maritime culture within since the Middle Ages. The thick curtains of land and sea walls, towers, gates, fortresses, and arsenals were built and continually restored and expanded from the 12th century to the 17th century, as the Republic of Ragusa deftly navigated the political waters of its time. Threatened by the much larger kingdoms of the Venetians, the Serbians, and the Ottomans at various times throughout its history, they were able to survive and even thrive behind their indomitable walls. With gelatos in hand, Ashley and I climbed up the narrow staircase by the Pile Gates to the top of the wall, looking down at the distinct red roofs of the old Ragusan capital. 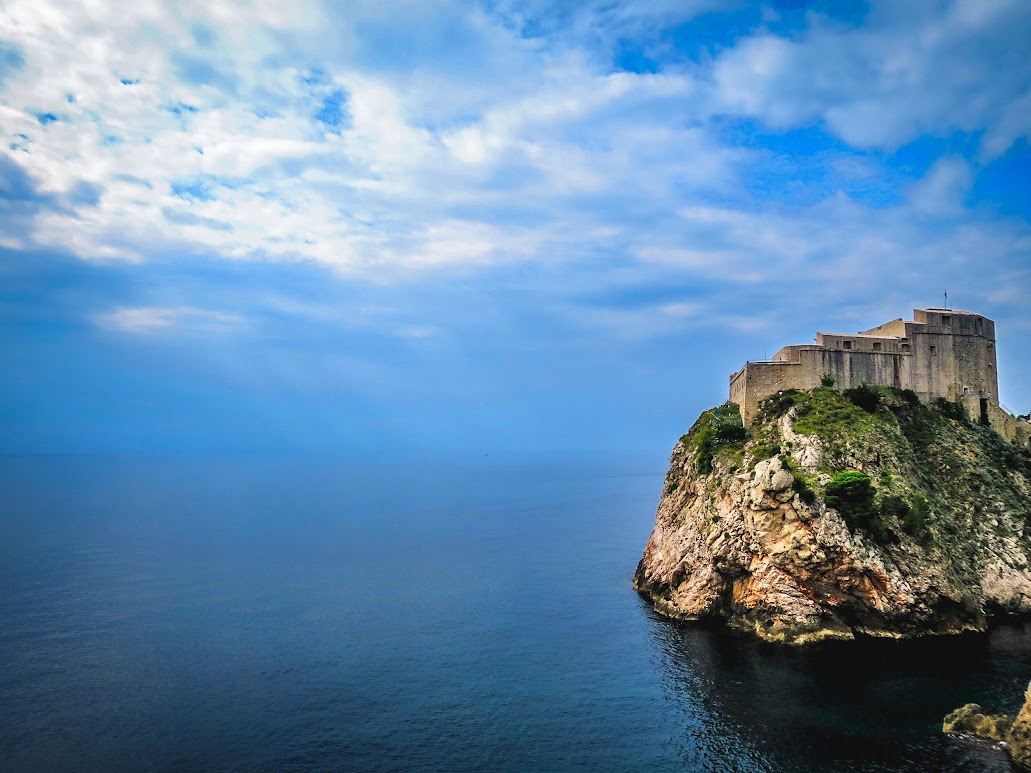 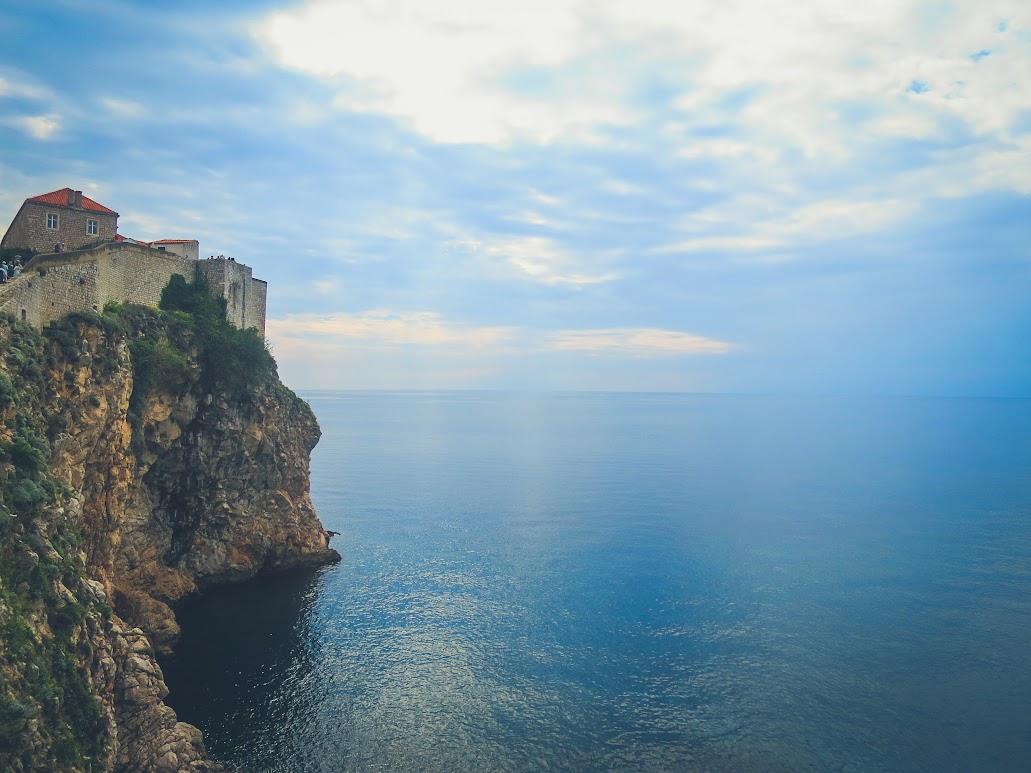 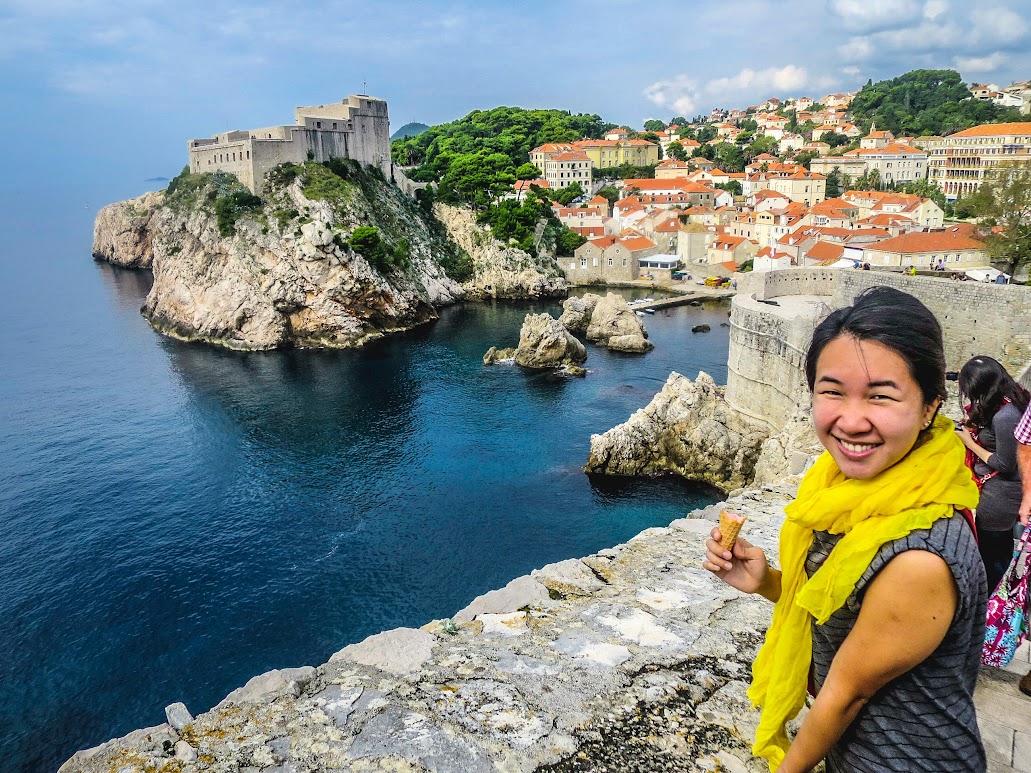 The Battle of Blackwater

On the other side of the Pile Gates, just outside the city, stands the fortress of Lovrijenac. Built on top of a rocky promontory that overlooks the main gateways into the city, the story of Lovrijenac’s construction in the 11th century is emblematic of Ragusa’s emergence from under the shadow of Venice. The Venetians had made plans to build their own fortress on that very location, thereby confirming their complete control over the main land and sea routes into the city. Word got out among the citizens of Ragusa however, and they quickly constructed their own fort while the Venetians were away gathering building supplies. When they returned a few months later, the earliest incarnation of Lovrijenac was already complete, and the Ragusans turned them away. Nowadays, it is most notable for its appearances in HBO’s Game of Thrones series, standing in for the Red Keep and overlooking the bay where the Battle of the Blackwater was filmed. 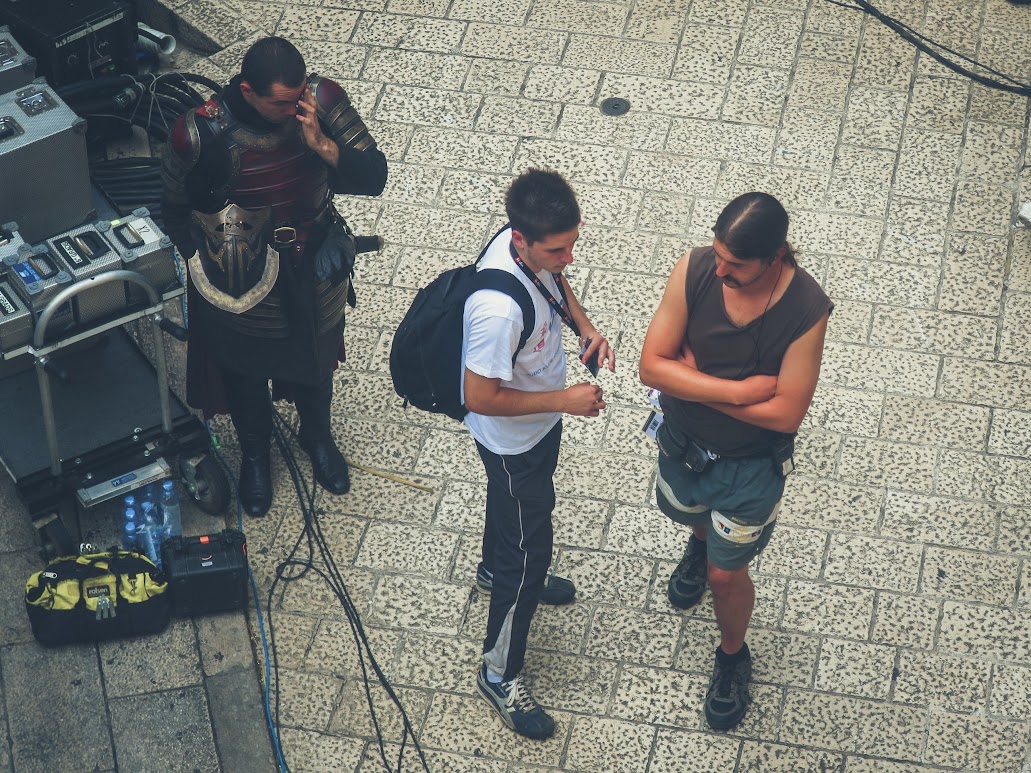 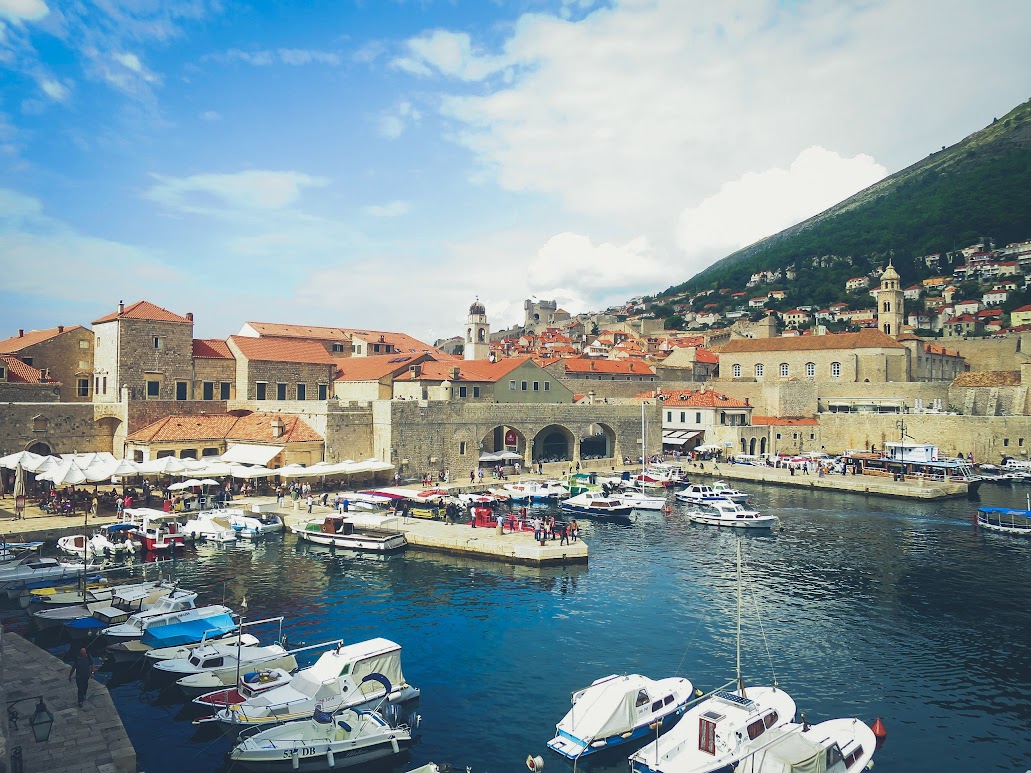 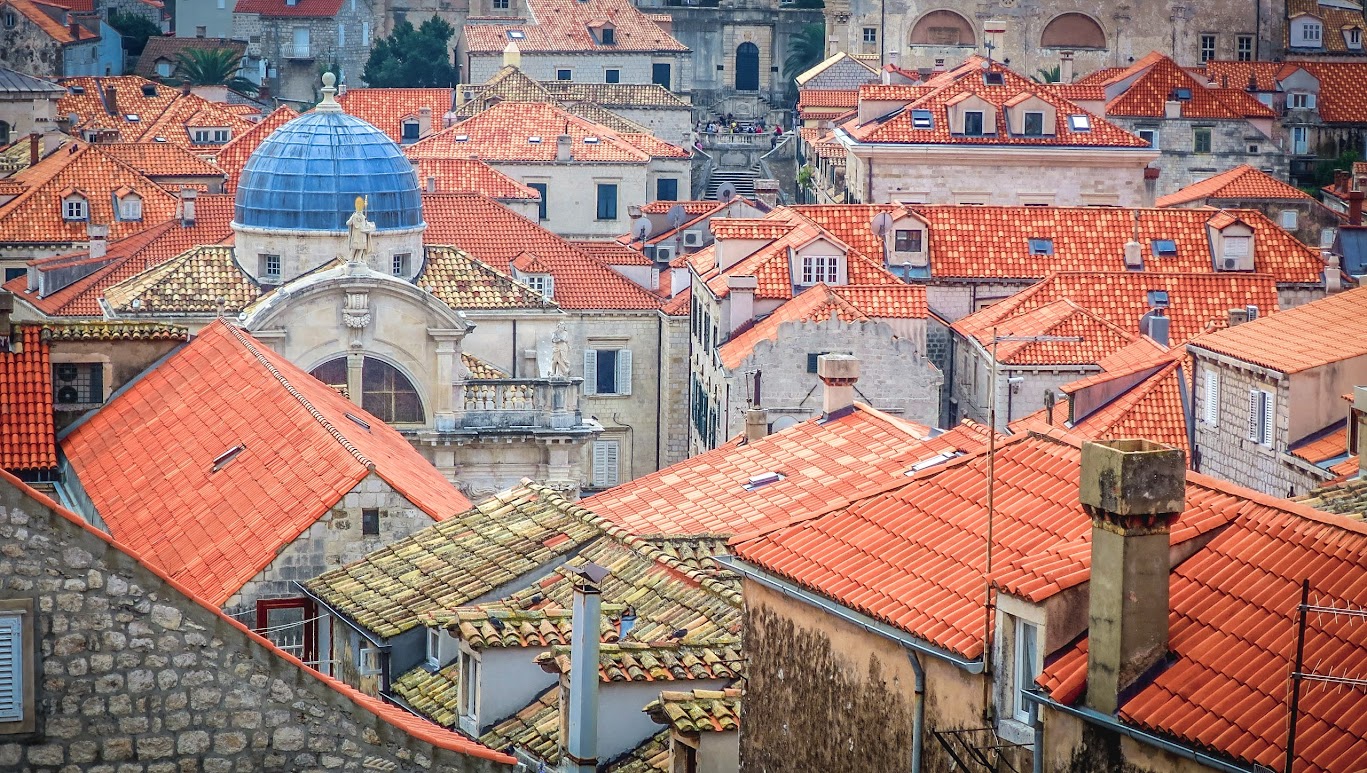 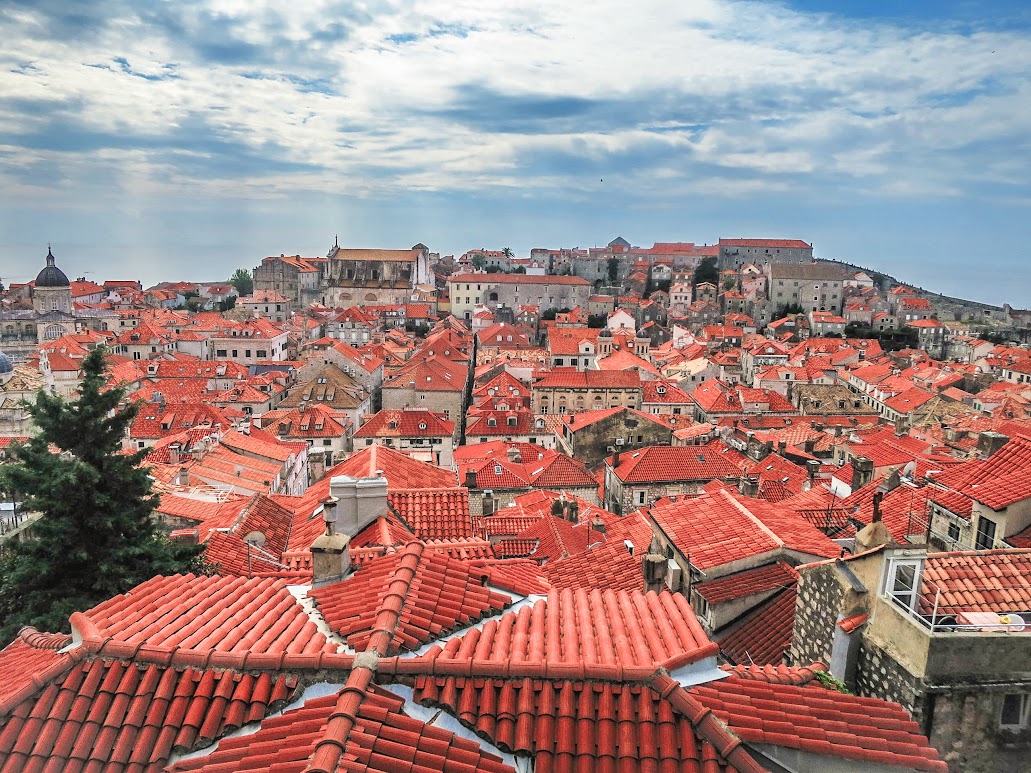 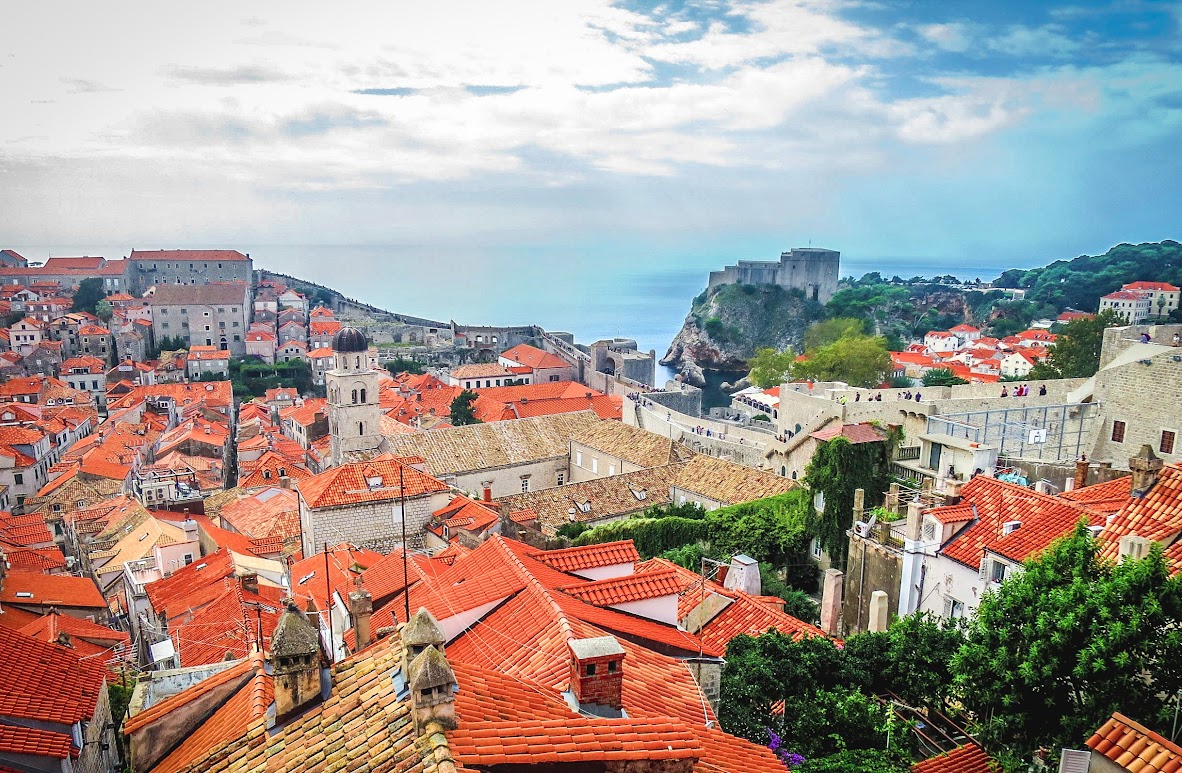 As we continued our circuit of the old walls, we saw a bottleneck in the section ahead. Stern men with headsets and clipboards stood guard as tourists craned their necks, while the sounds of sandals and swords echoed from below. Scenes from the upcoming season of Game of Thrones were being filmed that morning, and the makers were especially wary of revealing any spoilers to the gathering crowd. When we were finally allowed through to the next section of the wall, we were forbidden from looking down at the sets below, though I did get a quick peek of a man wearing the red and black armour of the Lannister armies. The beautifully preserved walls and buildings of Dubrovnik are a natural fit for the high fantasy setting of Game of Thrones, but it was only twenty-odd years ago that a modern army was lobbing bombs and shells at the resilient walls. Well over half the buildings in the old town suffered some sort of damage during the siege by the Yugoslav People’s Army, before the intervention of Croatian armed forces. Throughout the bombardment, however, the ancient walls held strong, just like they have for the last nine centuries. 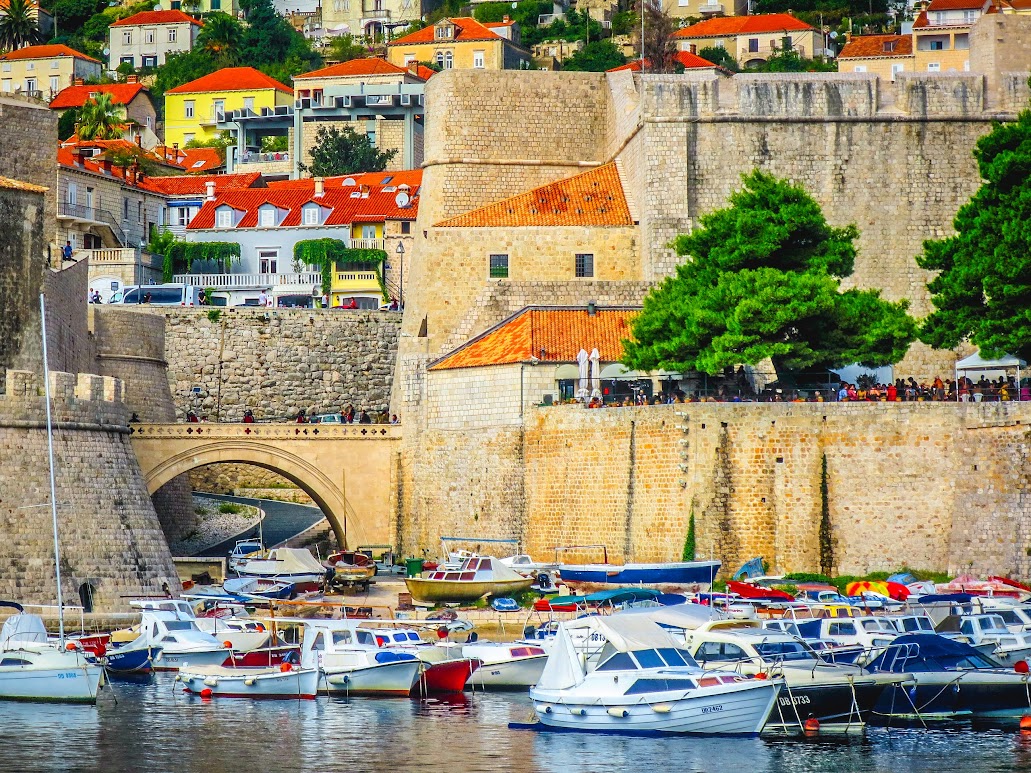 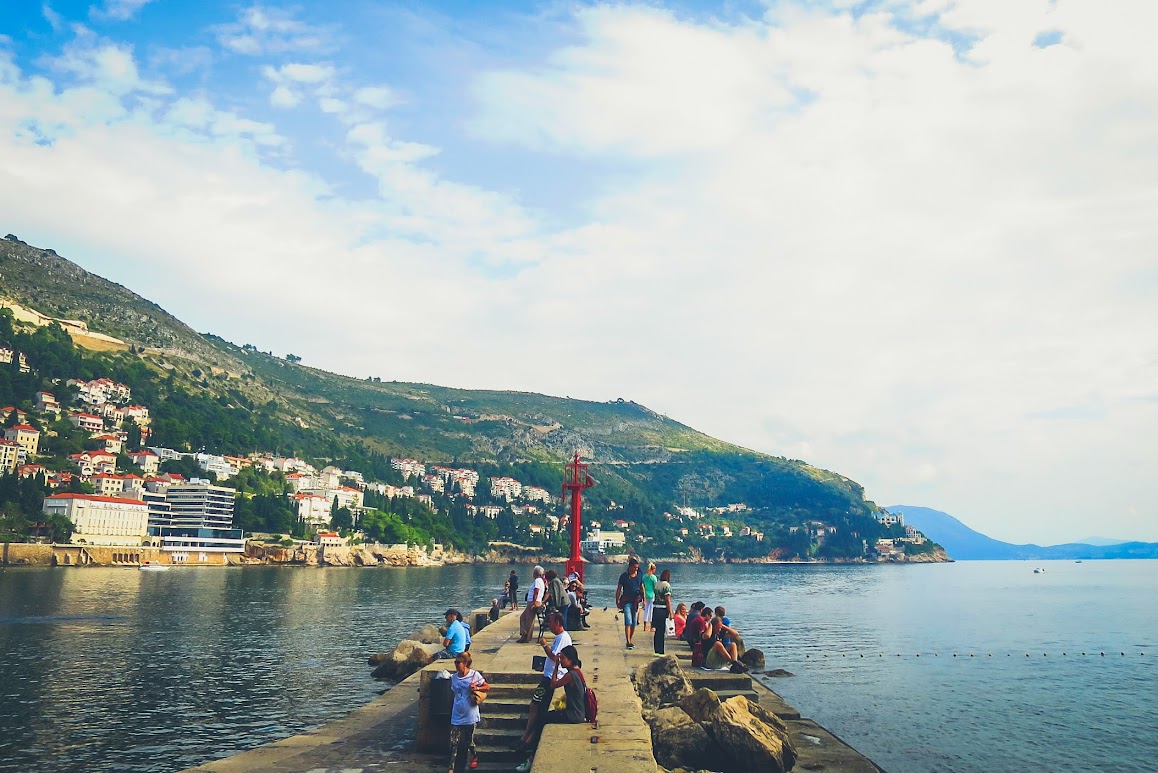 We climbed down from the battlements as morning turned to midday and went down to the harbour. Even from across the city, we could hear the sounds of extras yelling and screaming in unison, as chaos broke out across King’s Landing again and again. It was quieter on the other side of the sea wall, on the stone jetty where we had watched the sunset a few nights prior. The still waters of the Adriatic reflected the watercolour blues and whites in the sky, and the gentle green hills of the Dalmatian coast stretched and diminished into the horizon. 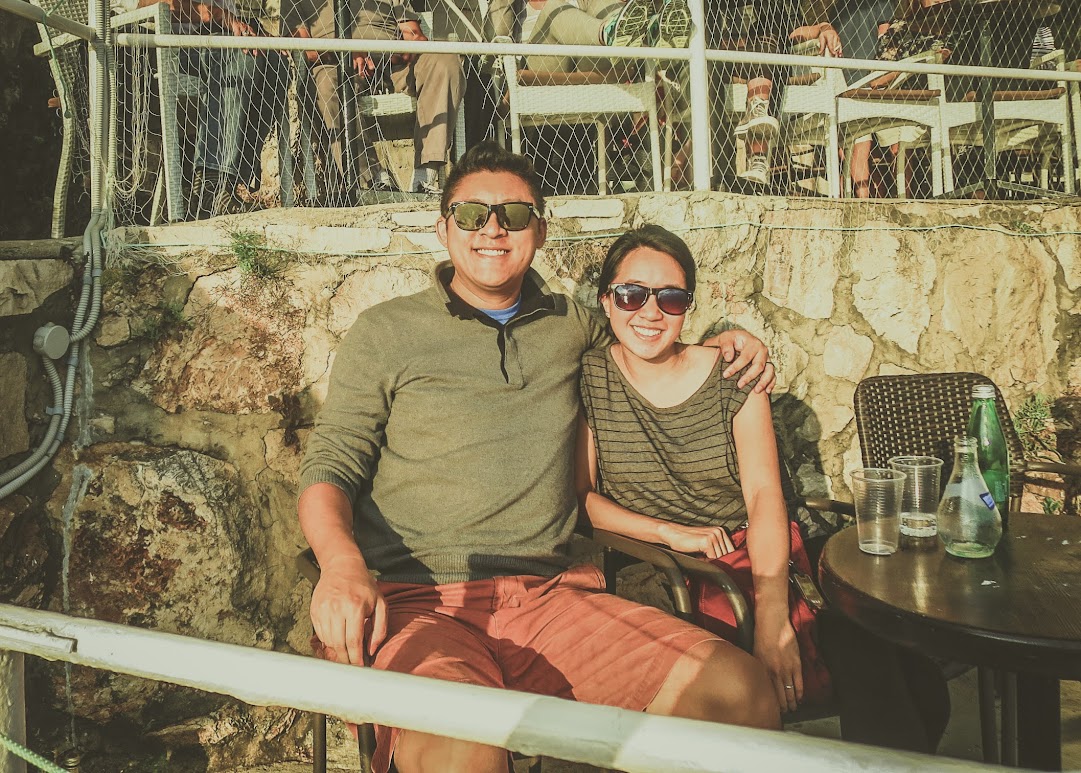 Cold Drinks with the Most Beautiful View

After grabbing lunch at a little Italian place just inside the harbour walls, we went off in search of Buza Bar, famous for the spectacular views from its cliff-side patios. Built into the southern, sea-facing walls, finding Buza requires a little bit of effort as the entrance is not clearly marked, and the only indicator that you are on the right path is a sign saying Cold drinks with the most beautiful view. Ashley and I wandered along the southernmost edge of the town, looking for any passageway through to the other side. Eventually, we came across a small gateway, a literal hole in the wall, and emerged onto the sunny decks of Buza. We were fortunate to find a free table on one of the patios, and there we sat for the next few hours, sipping our cold drinks in the Mediterranean sunshine. On our long watch, the sun slowly dipped towards the edge of the sea, setting the sky aflame, and the waters below it. I couldn’t think of a better way to cap off our late summer travels. We had started in the wet streets of Istanbul, explored the western frontier of the Ottomans, and ended on a cliff-side bar in Croatia. 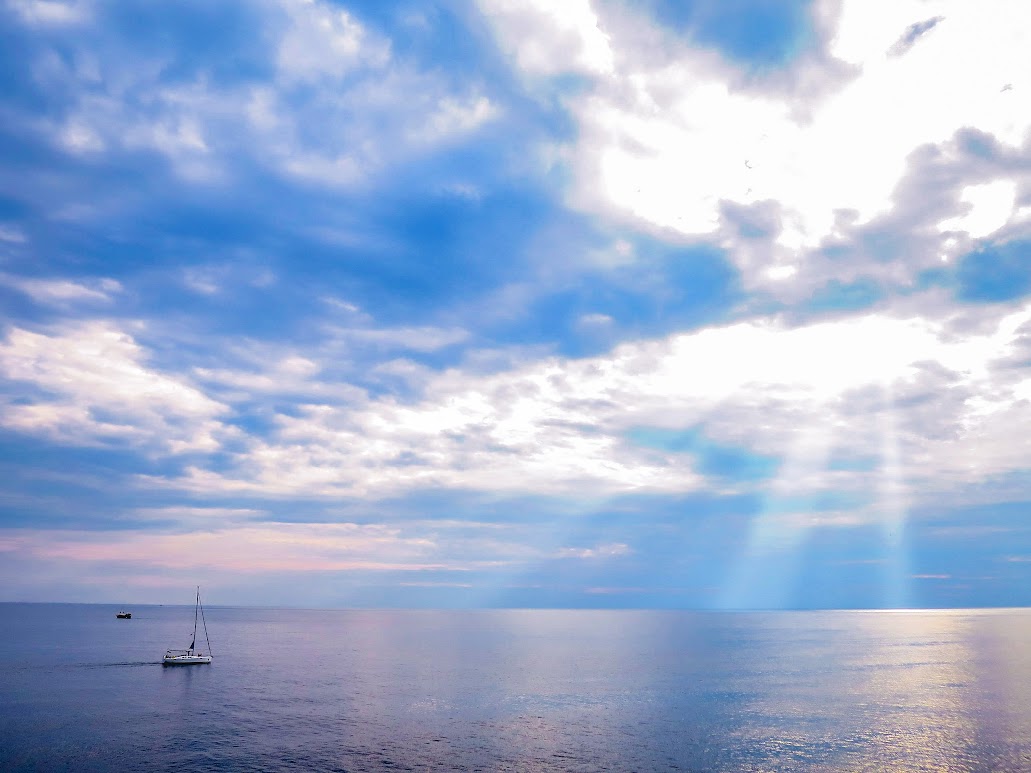 As we settled into our long journey home the next day, one that would take us through the airports of Zagreb, Istanbul, and Dubai, we had some time to reflect on our various travels during our first year of marriage. Thus far, we had honeymooned on the beaches of Vietnam, snowboarded in Austria, spent New Year’s in Italy, kayaked in the jungles of Borneo, biked along the tropical southern coast of Taiwan, celebrated weddings in Kuching and Singapore, and had just wrapped up an incredible trip to Istanbul and the Adriatic Sea. In total, we had traveled to thirteen countries in ten months – but we weren’t quite finished yet. Our first wedding anniversary would take place a couple of months after coming back from Croatia, and we thought we might as well try to make it fourteen. 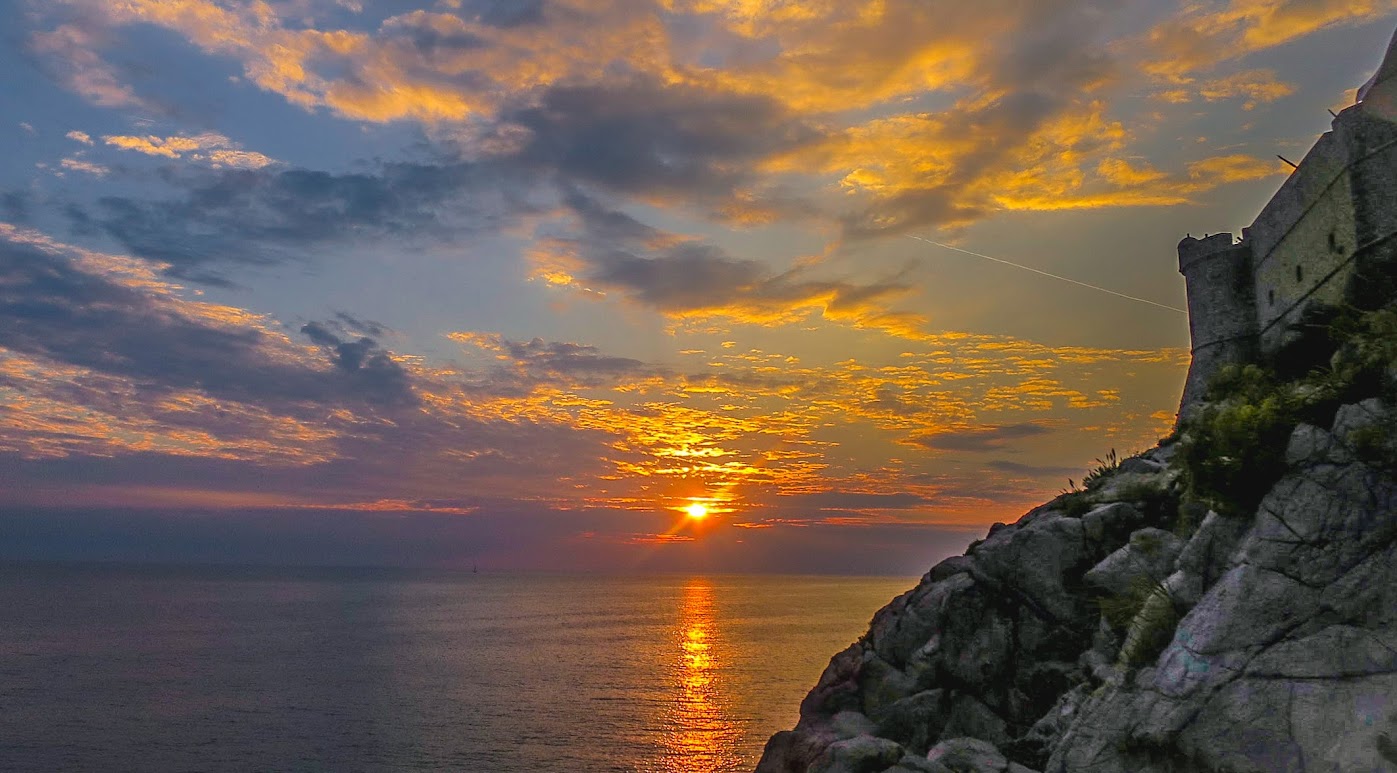