The following day was Ashley’s last in the Tokyo office, and, subsequently, the end of her work-provided stay at the Grand Hyatt Tokyo. For the remaining two nights of our trip, we’d be staying at the much smaller, and much cheaper, Hotel Nihonbashi Saibo in Central Tokyo. After Ashley left for her office in the morning, I checked out of the Grand Hyatt and trained uptown to Ningyocho Station with our luggage. When I arrived at the Hotel Nihonbashi Saibo, our room wasn’t available yet, so I left our bags with the front desk until the afternoon and plotted out my route for the day. My itinerary would be a little less hectic than the day before, sticking around Central Tokyo for the most part, and then heading down to Southern Tokyo in the late afternoon. 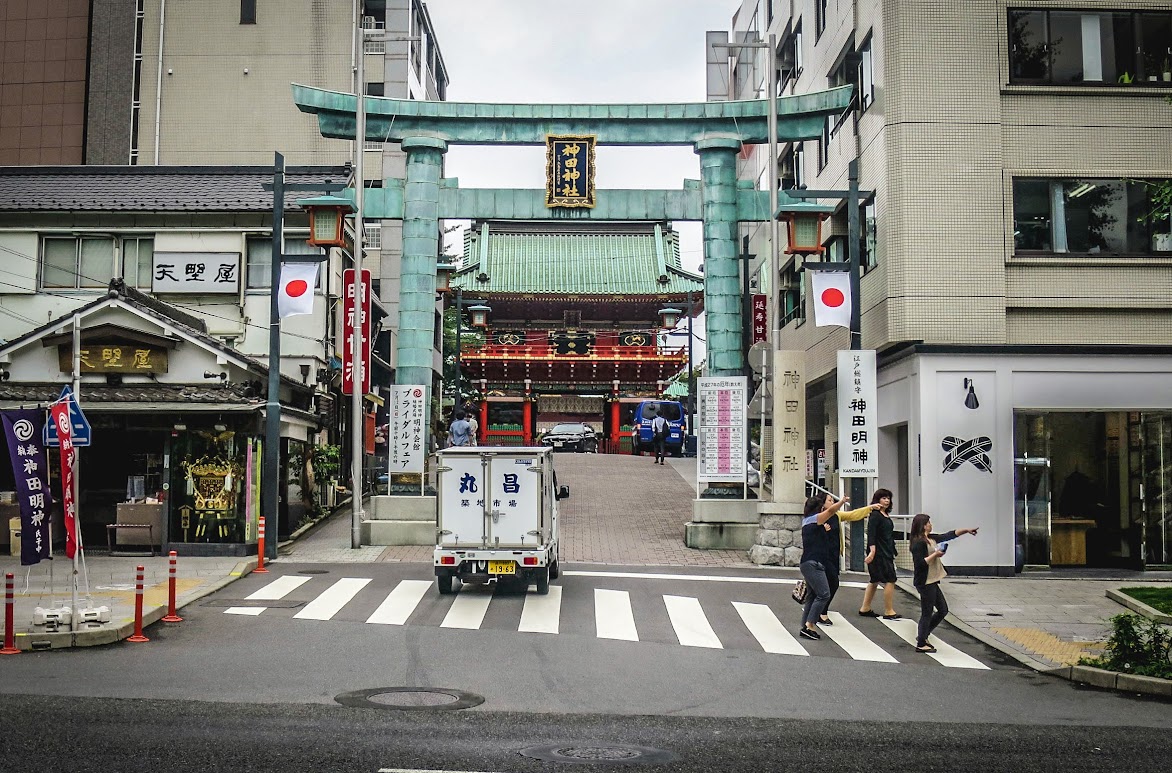 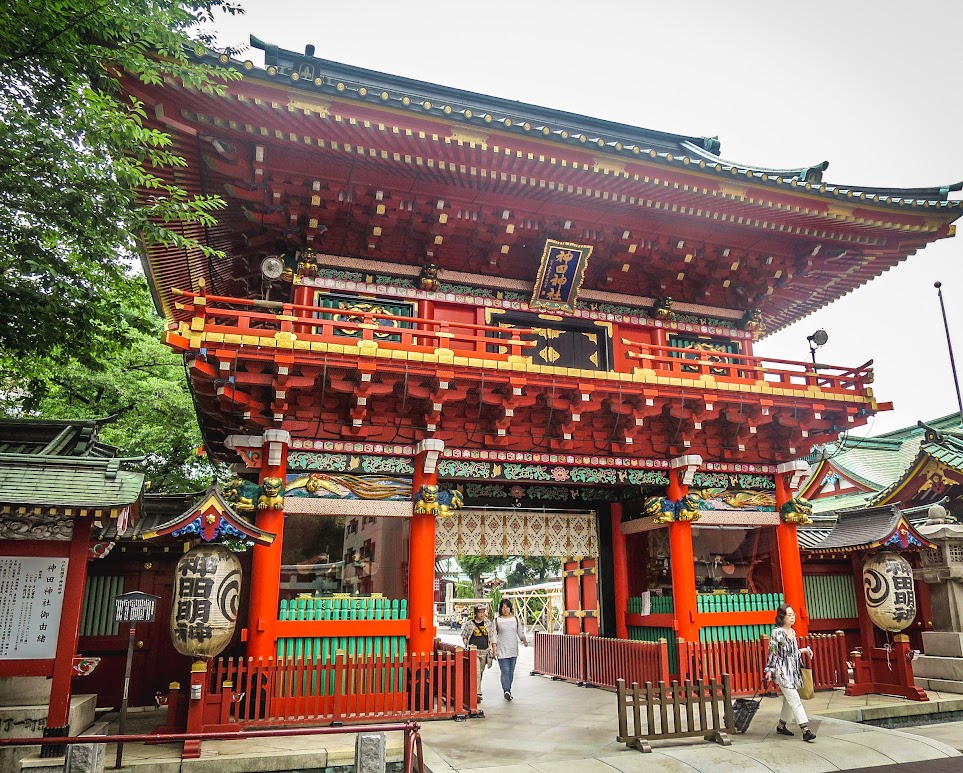 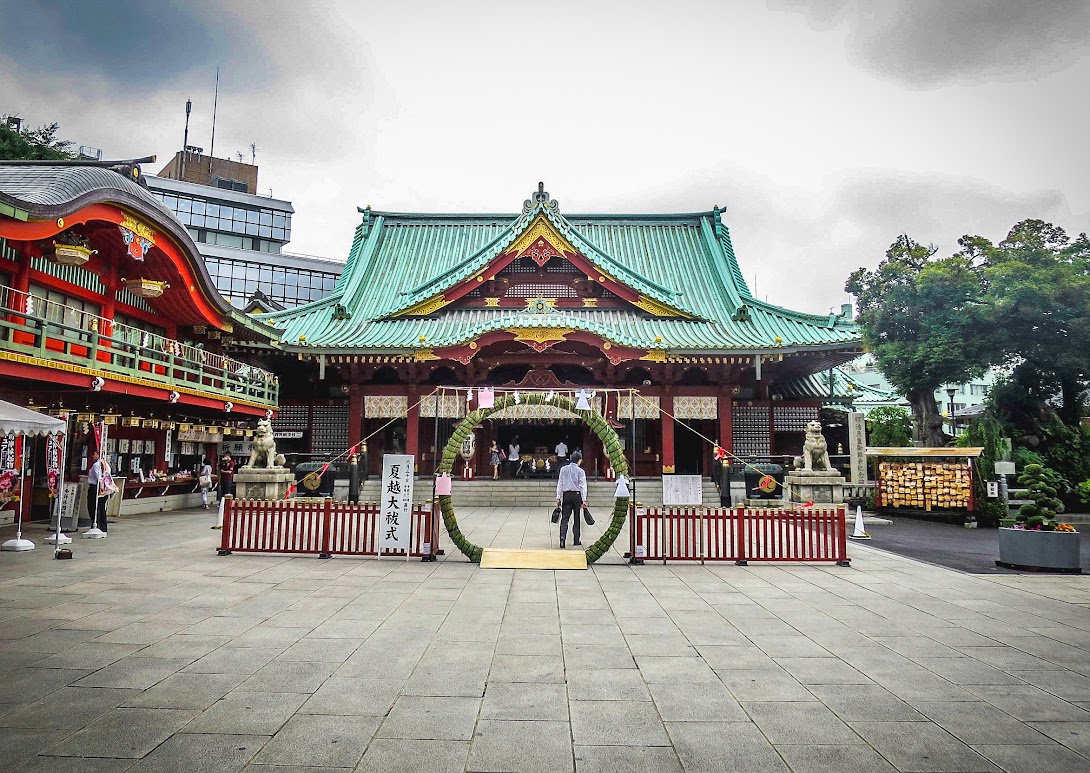 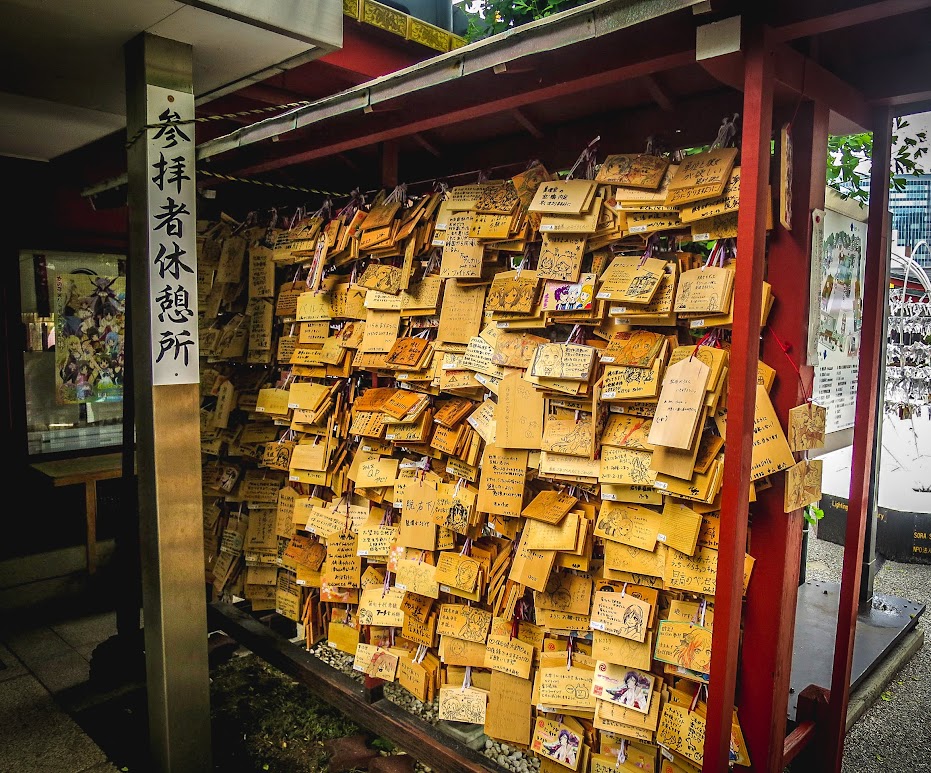 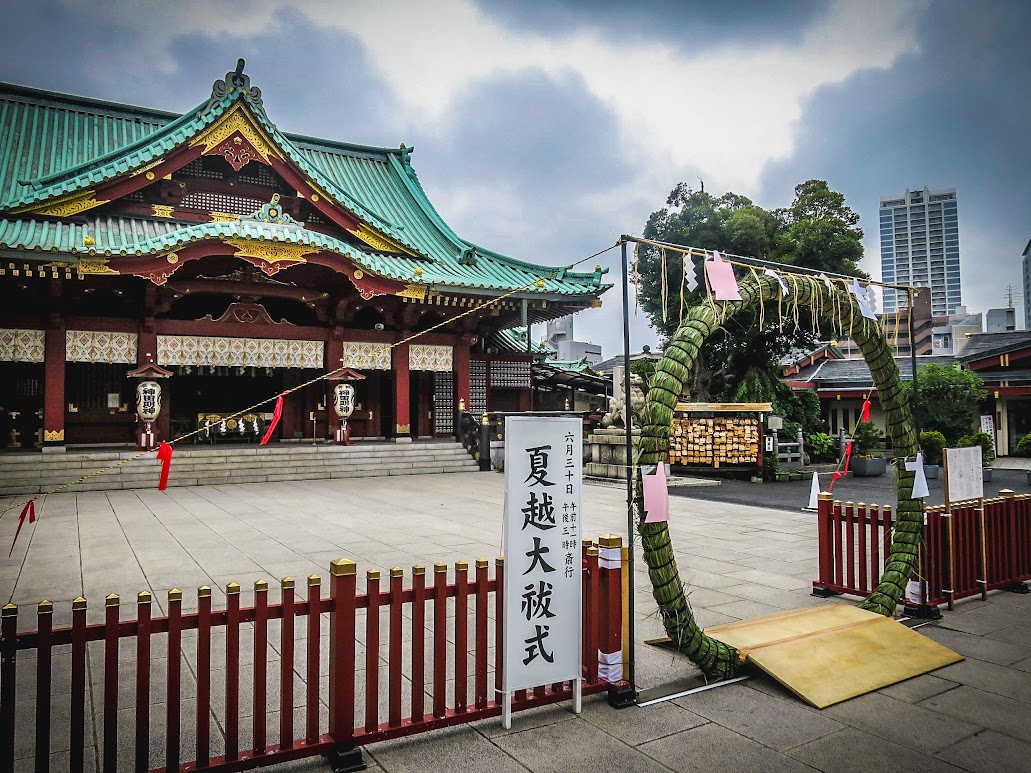 The Kanda Myojin is a Shinto shrine dating back over 1000 years, though the structures have been rebuilt multiple times due to earthquakes and fires. The current version was built in 1934 out of solid concrete, and it was one of the rare buildings in Tokyo that survived the carnage and destruction of World War II. After arriving at Ochanomizu Station and crossing the bridge over the Kanda River, I came across a large, pale-green copper gate standing between two modern buildings. A larger, ornate, reddish-orange gate stood at the end of a short driveway connecting the two structures, guarding the entrance to the inner temple complex.  Once inside, I saw a series of low, sloping, copper rooftops over brownish-red buildings, all surrounding a nearly empty courtyard. Compared to the fanfare surrounding Sensō-ji, Kanda Myojin seemed almost an afterthought, forgotten and tucked away behind nondescript office buildings and storefronts. Every so often, though, a temple visitor would walk in quietly through its red gates – an older woman with shopping trolley in tow, an office lady in heels and clutching her purse, a businessman with a briefcase in one hand, his jacket in the other – to seek a quick blessing from Daikokuten and Ebisu, two of the Seven Gods of Fortune in Japanese lore. 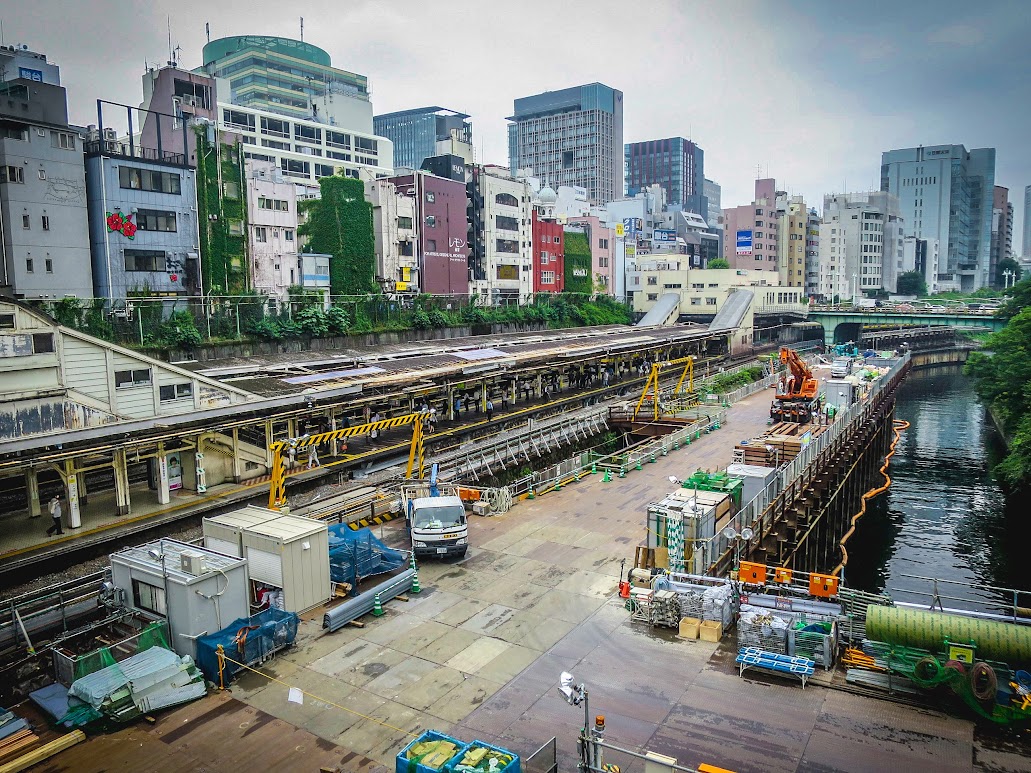 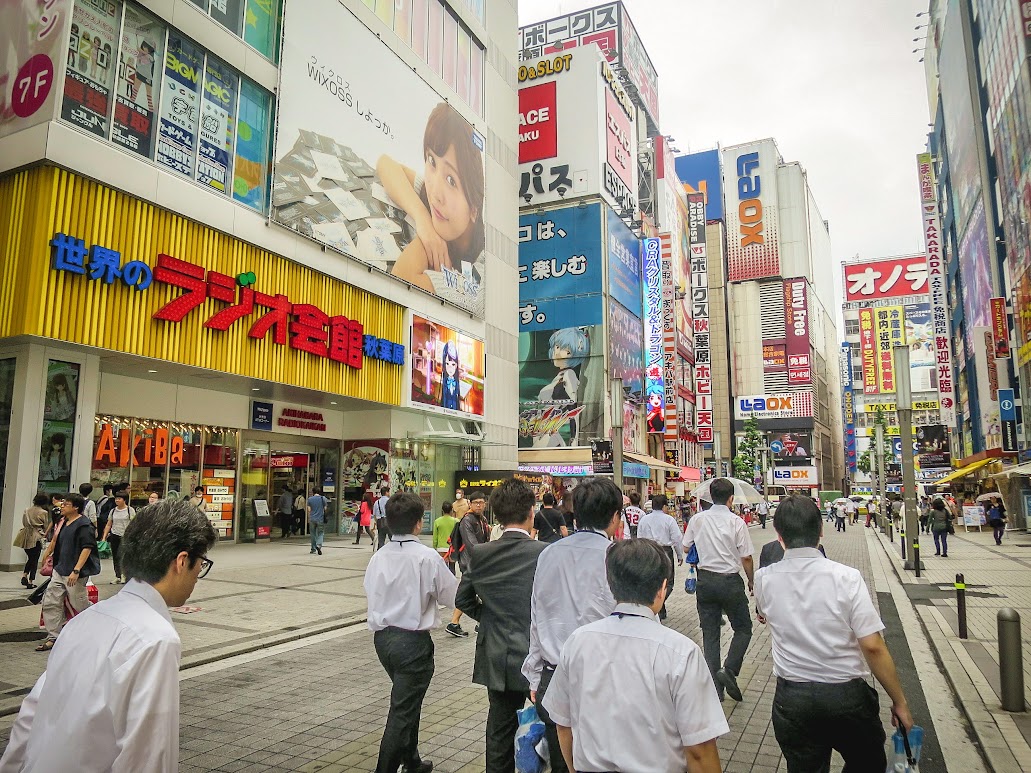 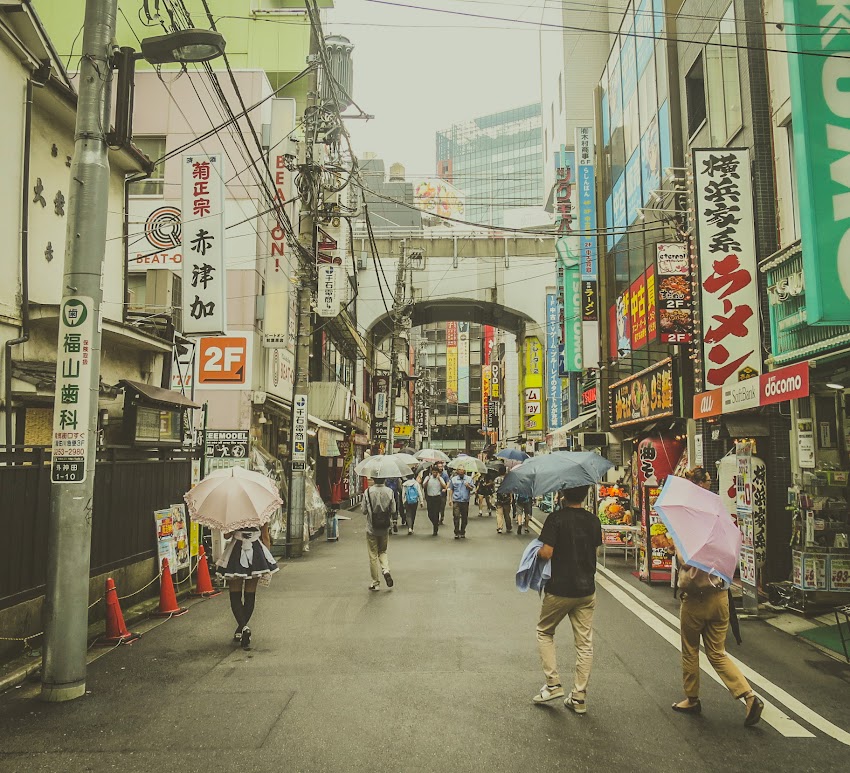 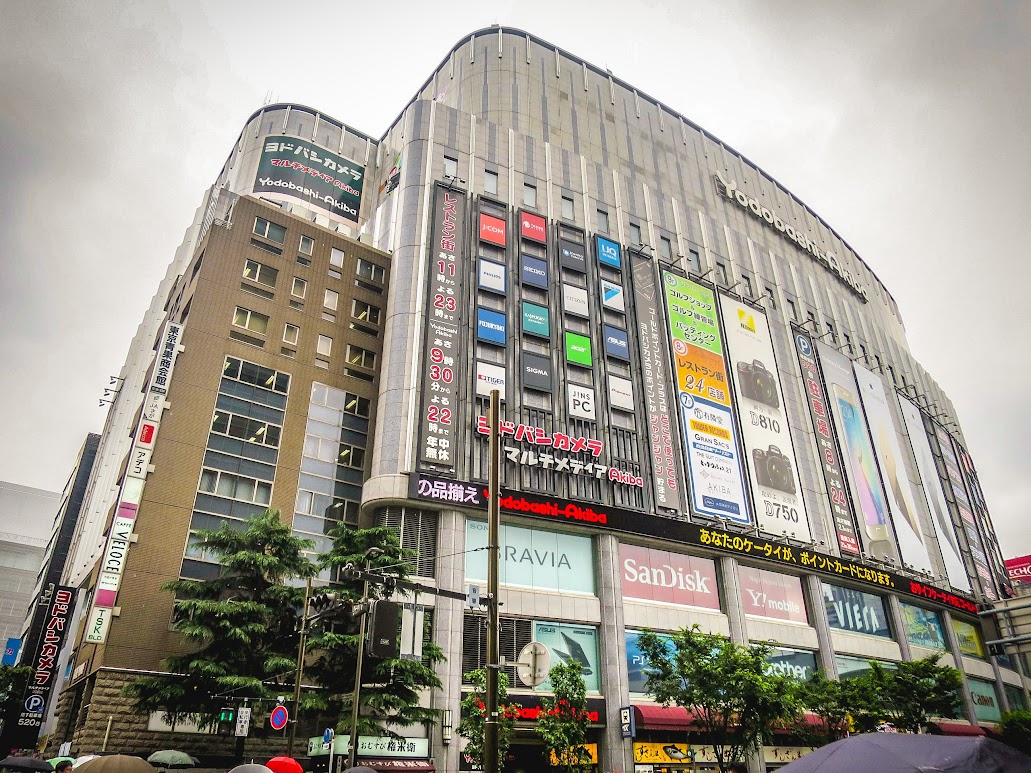 I followed the last of the visitors out the gate and walked east along the Kanda River to a district that needs no introduction. Akihabara – the mecca of otaku culture, the gleaming hub of electronics and technology, the land of maid cafes, the domain of cosplayers, and the dark underbelly of cartoon obsession run amok. It was a subdued neighbourhood that morning, laid low by the intermittent rain. Everywhere I looked, it seemed like all of us tourists were there to do the same thing – to observe and to gawk, except there was nothing to gawk at except one another. Our expectations of Akihabara had perhaps been distorted by our pop culture lens, as well as our imagining of the sort of people and places we would find, and the faint, sheepish disappointment of dozens of tourists was palpable in the cool morning air. Perhaps it’d be a different scene if the weather was better, or maybe Akihabara didn’t really pick up until later in the day, or it might be that everyone was actually inside the buildings, behind the glass and the neon signs, while all of us tourists lingered on the wet streets below. 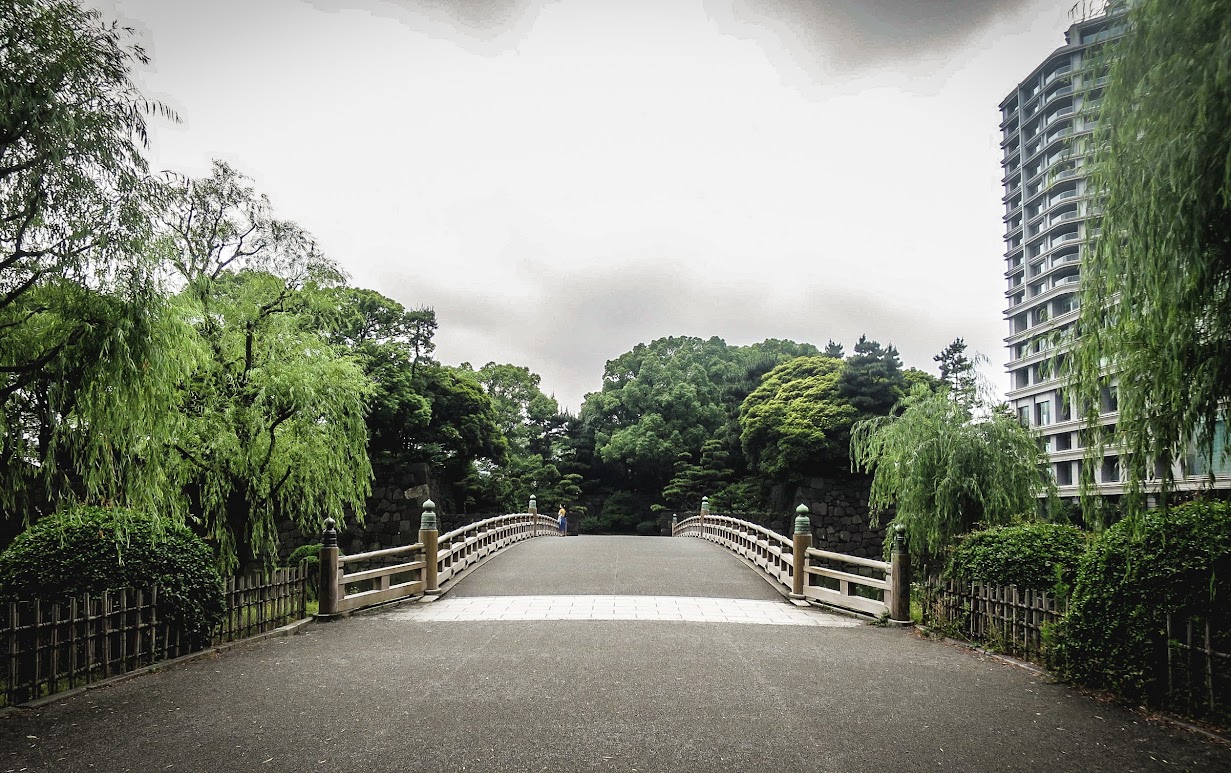 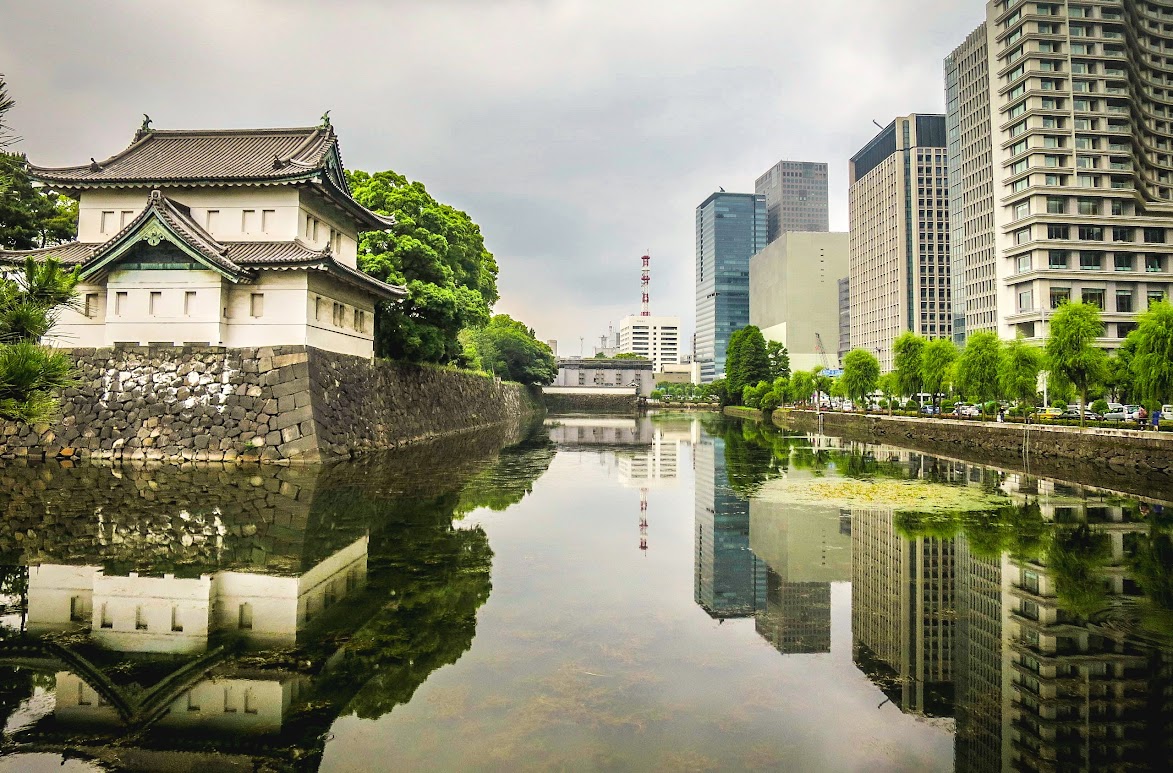 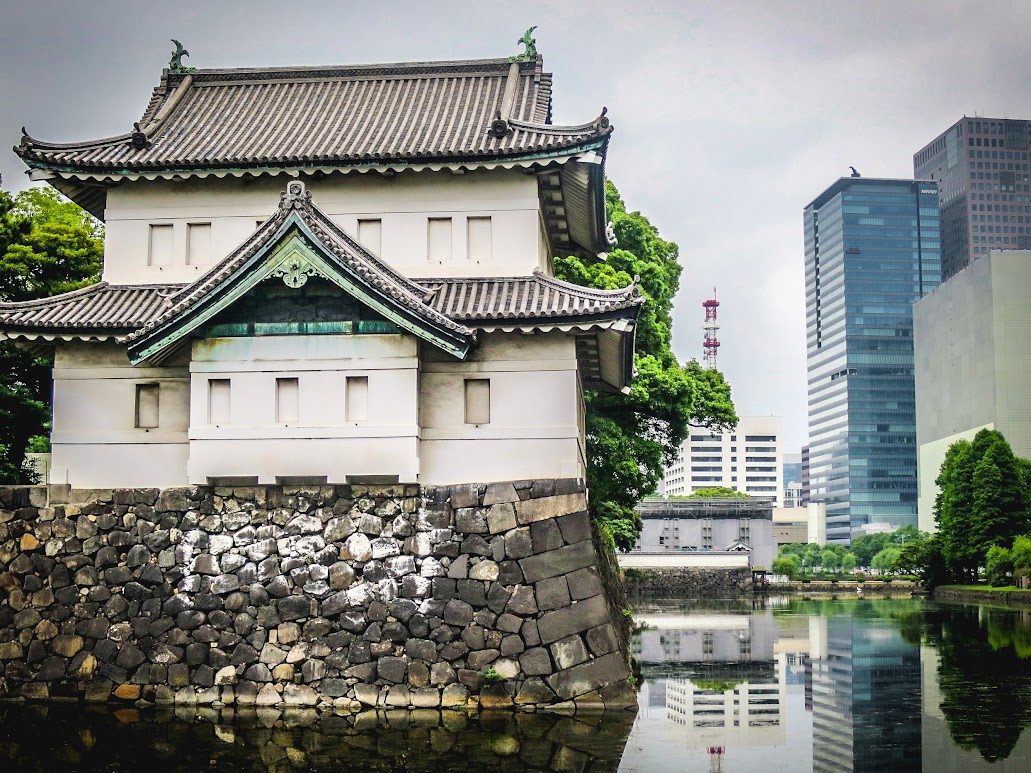 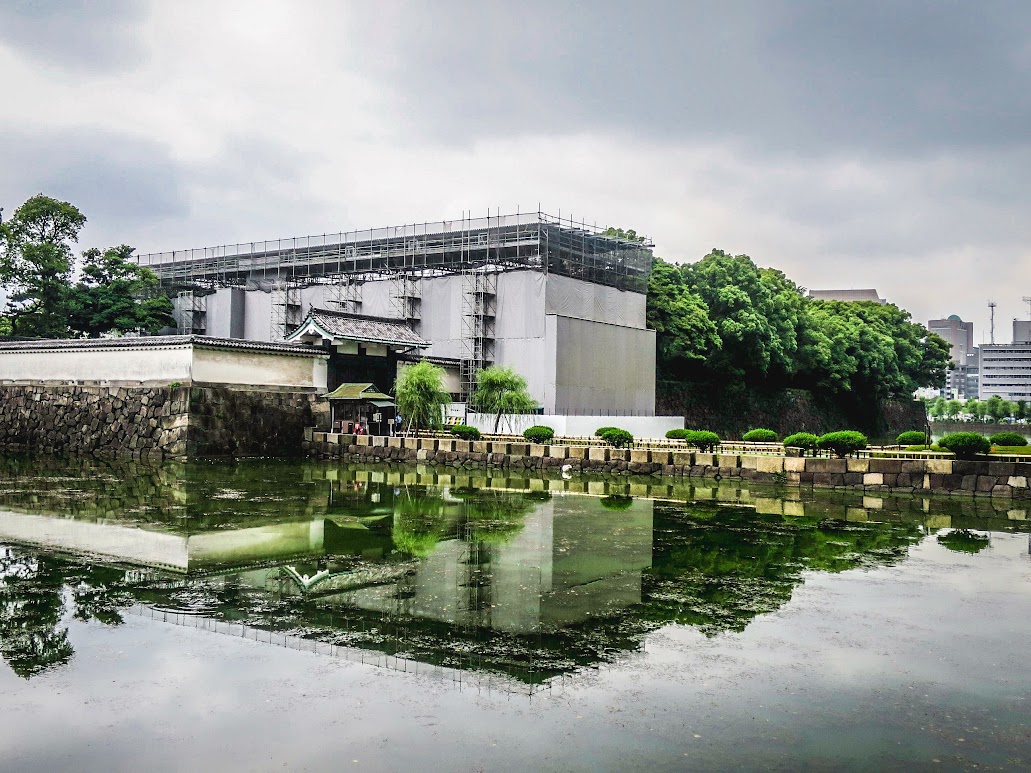 After lunch, I returned to Nihonbashi to quickly check in to our hotel, before getting back on the train to the quietly beating heart of Japan – the Tokyo Imperial Palace. Behind its thick stone walls lives the Emperor of Japan, the very symbol of the Japanese state, the holder of the Chrysanthemum Throne, direct descendant of the sun goddess Amaterasu, the supreme earthly Shinto authority, scion of the oldest continuous hereditary monarchy in the world, and the last remaining emperor on earth. Despite the impressive resume, the imperial household occupies a largely ceremonial role in Japanese society these days, stripped of all political and military authority. I wish I could say more about the palace and the gardens, but the palace grounds were closed that day, and I was limited to wandering around its watery perimeter. 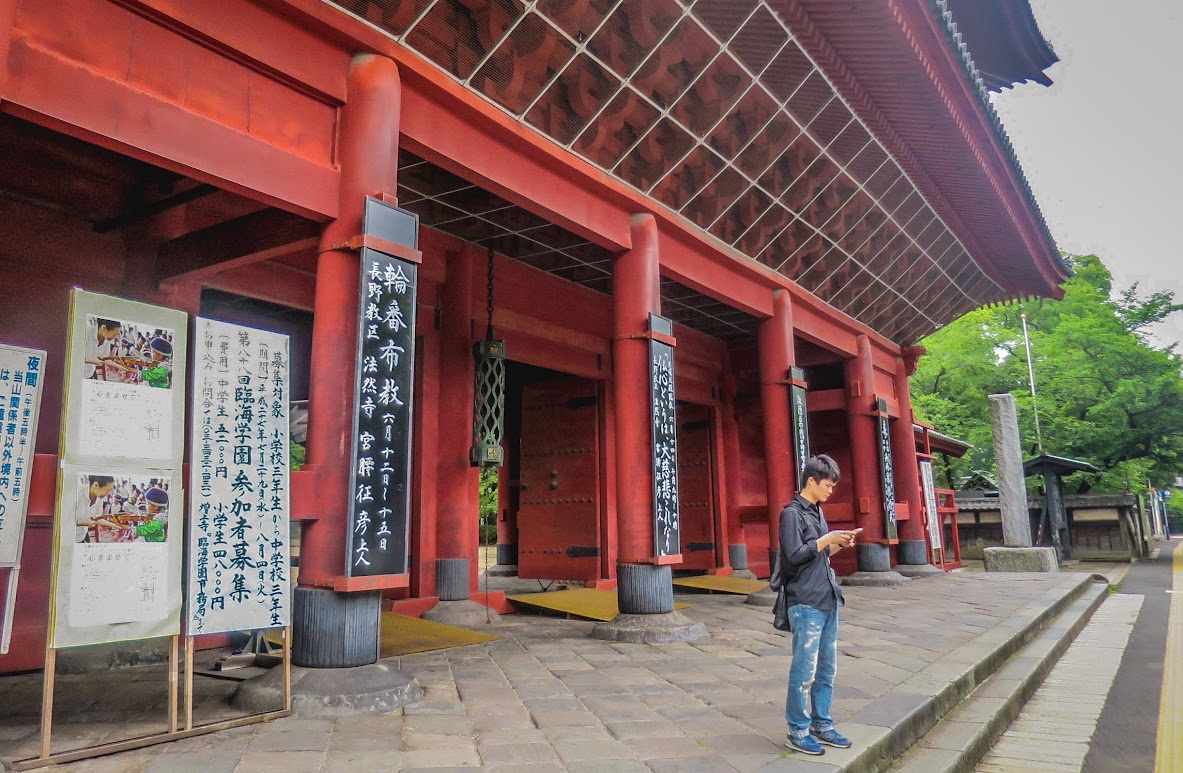 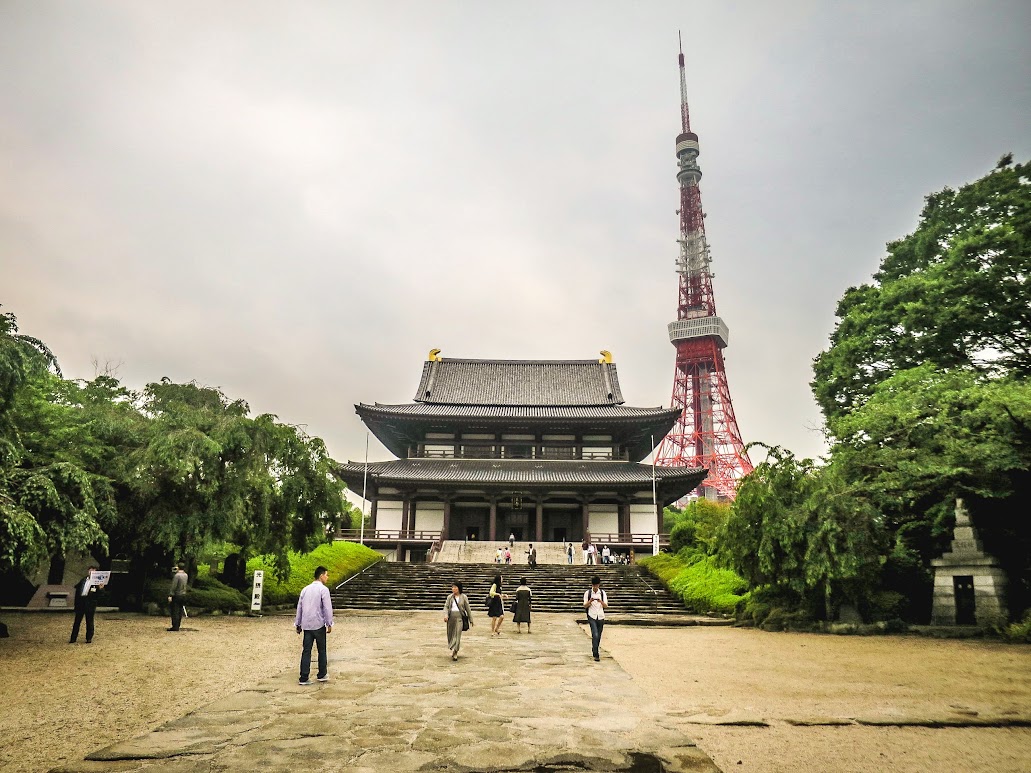 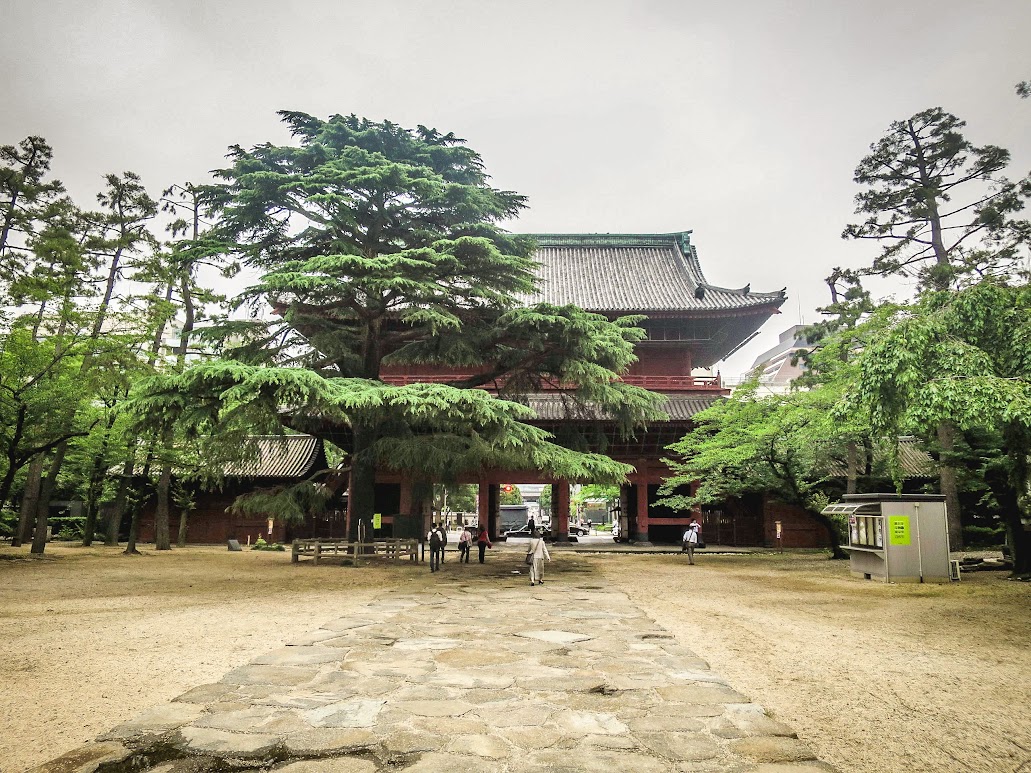 The Temple of the Shogun

From Tokyo Station, I took the metro south to Daimon Station, where I went off in search of Zōjō-ji Temple, the main temple of the Jōdo-shū school of Japanese Buddhism in the region. It also served as the family temple of the Tokugawa clan, the current temple having been re-located to its present location by the legendary Tokugawa Ieyasu. Ieyasu, along with Oda Nobunaga and Toyotomi Hideyoshi, were the three main figures in late 16th and early 17th century Japan that ultimately put an end to almost 150 years of internal political and military conflict (known as the Sengoku Period). Japan was united under the Tokugawa Shogunate for the next 260 years, before the Meiji Restoration in the 19th century temporarily restored governing authority to the Emperor. The massive red gate of Sangedatsumon dominated my field of vision when I first approached Zōjō-ji, but, beyond the gates, the temple complex opened up into a wide-open, dirt square with leafy green trees around the margins. Some of the temple buildings seemed to be hiding behind their arboreal disguises, while the main hall stood on top of a small hill, slightly elevated from the rest of the grounds. 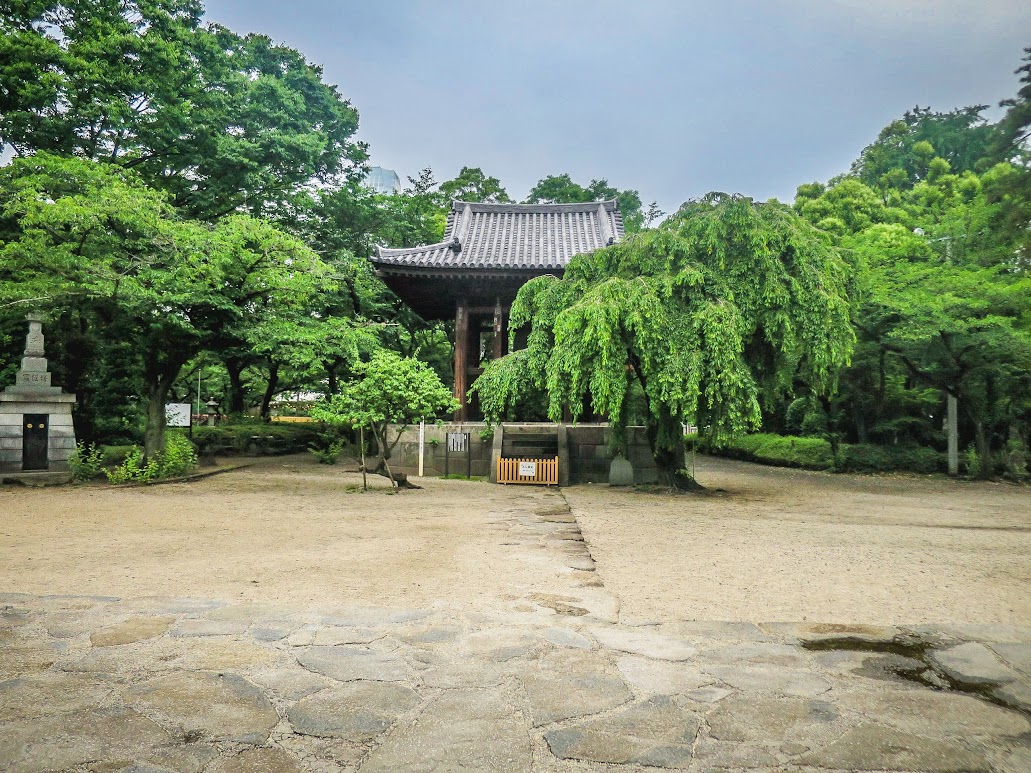 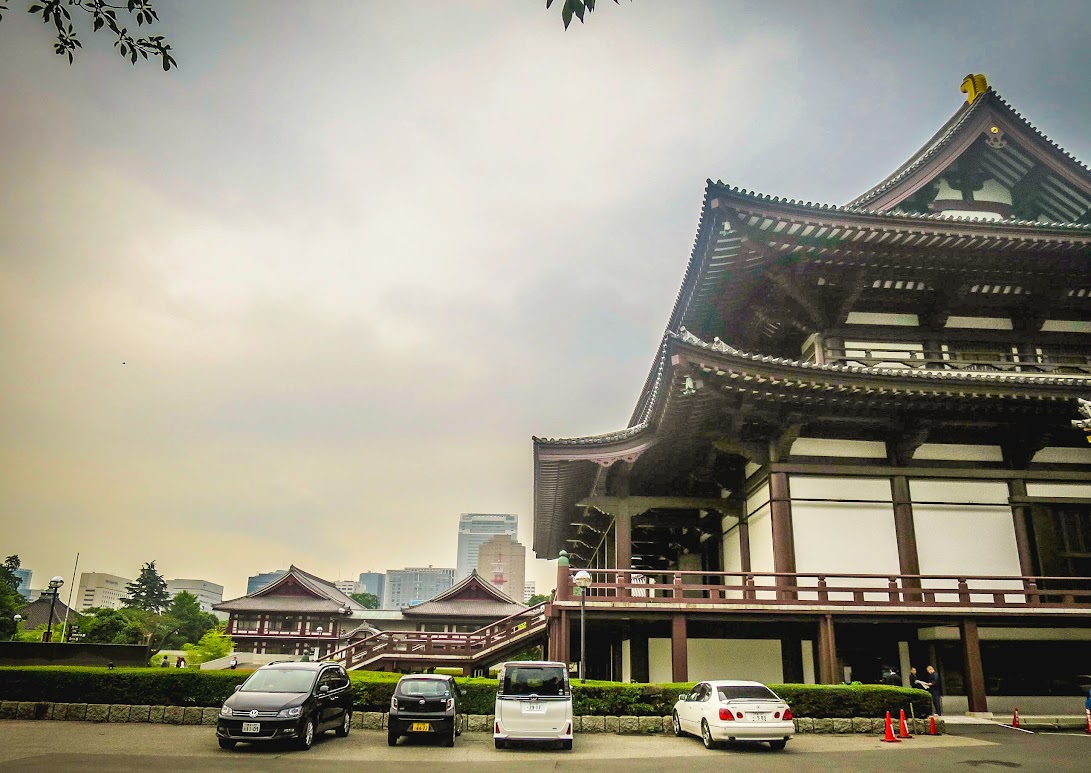 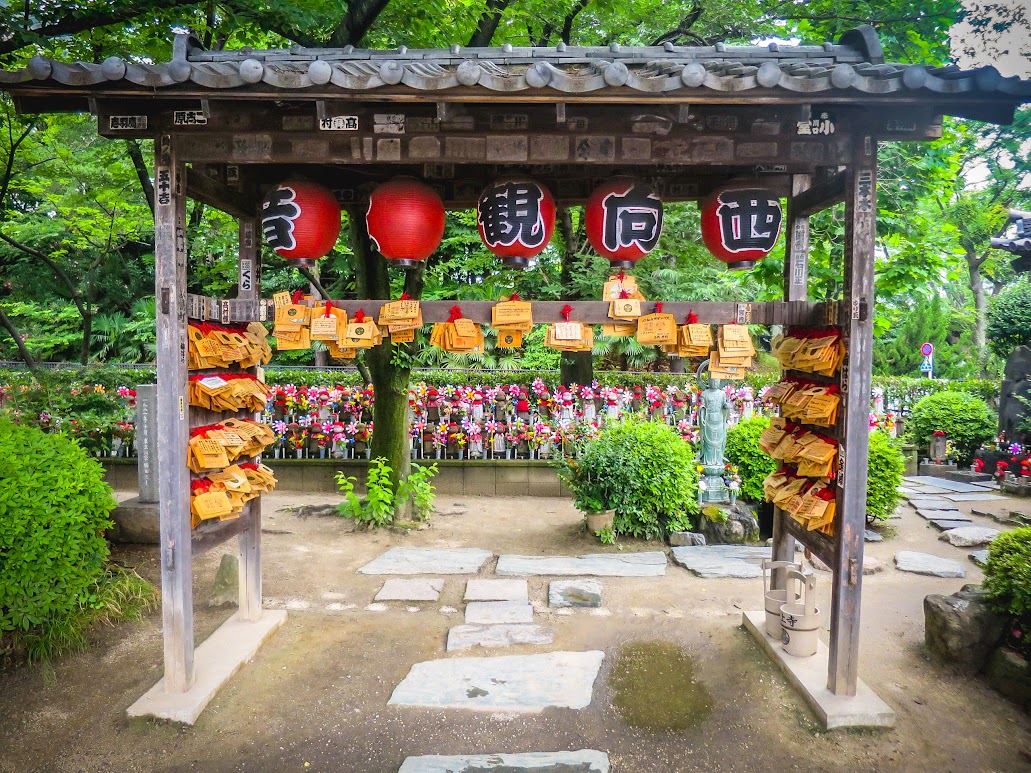 Zōjō-ji Temple didn’t have the festive crowds and atmosphere of Sensō-ji in Asakusa, nor did it have the small neighbourhood feel of Kanda Myōjin. Instead, there was a feeling of solemnity to the empty grounds, and it seemed to have an air of nostalgia or past grandeur. I could have been centuries in the past, but for the bright red and white beams of the iconic Tokyo Tower looming above the main hall. When I was leaving the temple for the red and white beacon in the distance, I came across a disarming sight in a quiet corner of the grounds. Sitting quietly just off to the side of the main hall, along the northern edge of the temple complex, lies the Unborn Children Garden. Here, parents have a space to remember children lost to miscarriages, still births, and abortions by erecting stone statues and decorating them however they wish. The small statues go all the way around the back of the temple, and all along the street on the way to the Tokyo Tower. It was and is a powerful image, each statue a quietly public signpost to the process of grief and what could have been. On that note, I’ll wrap up pt. 3 of Ernie goes to Tokyo here, and I’ll continue the rest of my second full day in Tokyo in pt. 4. 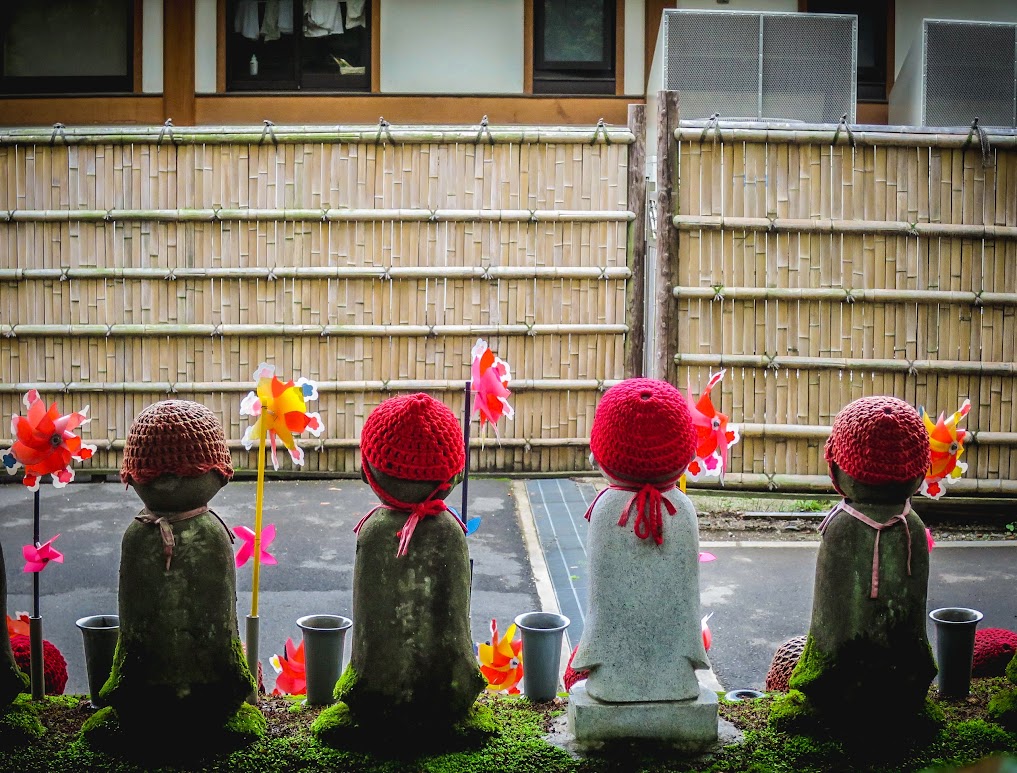