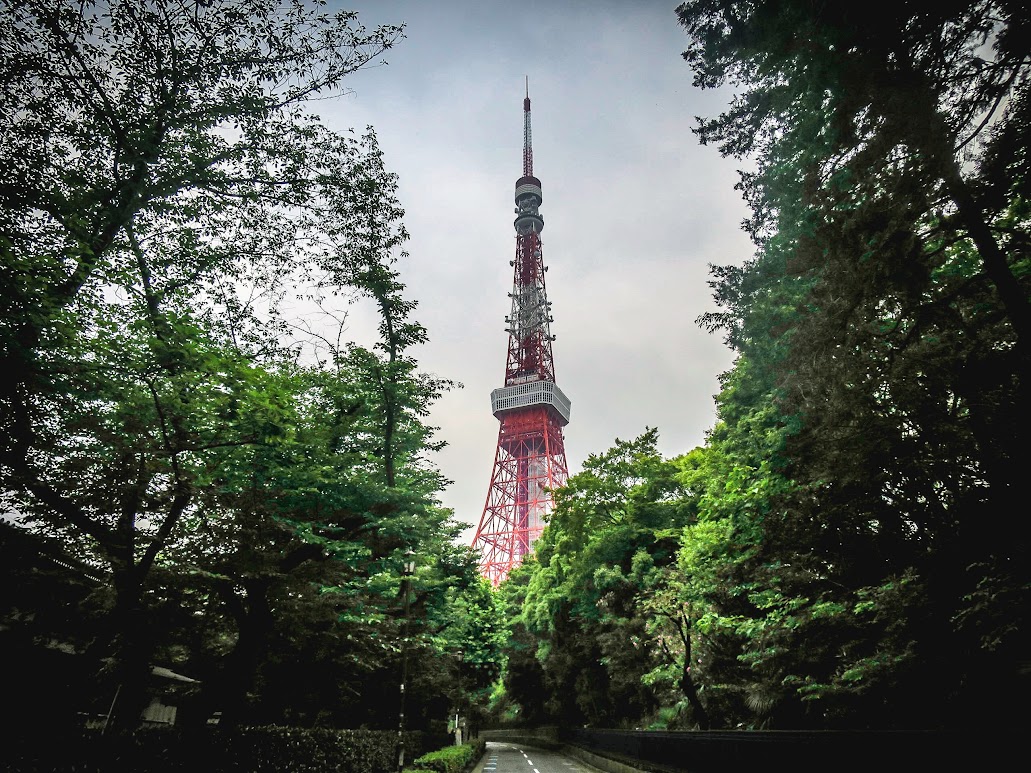 Symbol of the Newly Ascendant

From the terrible ashes of World War II, a broken and defeated Japan was able to string together several decades of unprecedented growth, now referred to as the Japanese Economic Miracle. This growth was partly a result of the significant aid given to post-war Japan from the US government to guard against increasing Soviet influence in the Pacific. The Japanese government also enacted and encouraged specific labour, industrial, and fiscal policies and practices that emphasized economies of scale, long-term growth, over-loaning from banks, and favourable trade positions. Completed in the late 1950s, the Tokyo Tower was the symbol of that newly ascendant Japan. 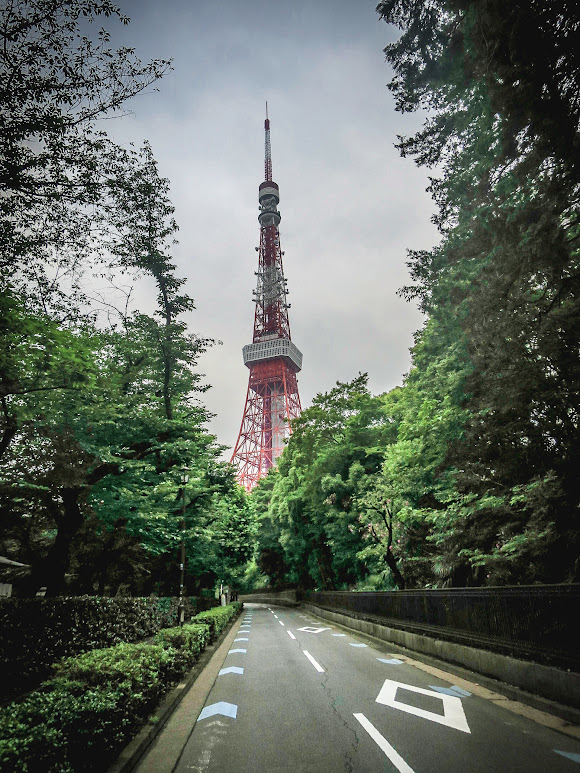 The iconic red and white structure was modeled after the Eiffel Tower and was originally designed to be the tallest building in the world. About 1/3 of the steel was re-purposed from US tanks damaged in the Korean War earlier in the decade, a stark reminder of the geopolitical context in which the economic miracle took place. With the completion of the Tokyo Tower, Japan went full speed ahead into the 1960s and beyond, growing into the 3rd largest economy in the world, before the devastating collapse of the Japanese asset price bubble in 1991. The so-called Lost Decade followed, with some economists including the decade from 2001 to 2010 as well, creating a Lost 20 Years of falling GDP, reduced wages, and stagnant prices. Though Japan is still dealing with the effects of the Lost Decade/20 Years to this day, the Tokyo Tower stands as a monument to the country’s resurgence from the dust and smoke of the last great war. 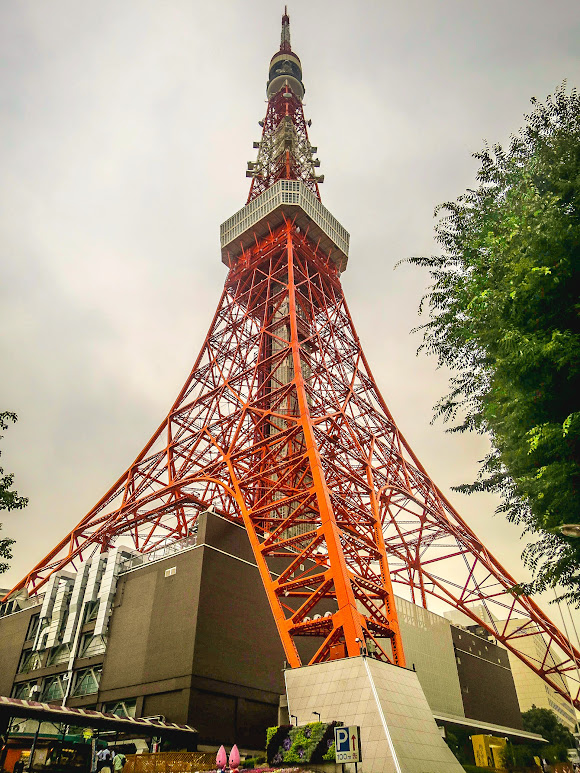 The Hulking Mass, a Quiet Neighbourhood

After lingering at the Unborn Children Garden, where I ended my previous post (Ernie goes to Tokyo pt. 3), I headed west along the unnamed street running along the north end of Zōjō-ji. There was a light rain as I walked down the small, tree-lined road, the hulking mass of steel towering above the green canopy and wet pavement. I’d always imagined the Tokyo Tower standing in the midst of skyscrapers, surrounded by busy streets and dense, polite crowds. As I turned the corner, however, I saw a quiet neighbourhood floating in a late afternoon lull, the scene so still that individual voices and conversations could be heard from across the street. An ugly, squat building stood at the base of the tower, and I paid a perfunctory visit to its air-conditioned chambers. I held off from going up to the observation deck, though, as it was getting late, and there was still one more place nearby that I wanted to visit. 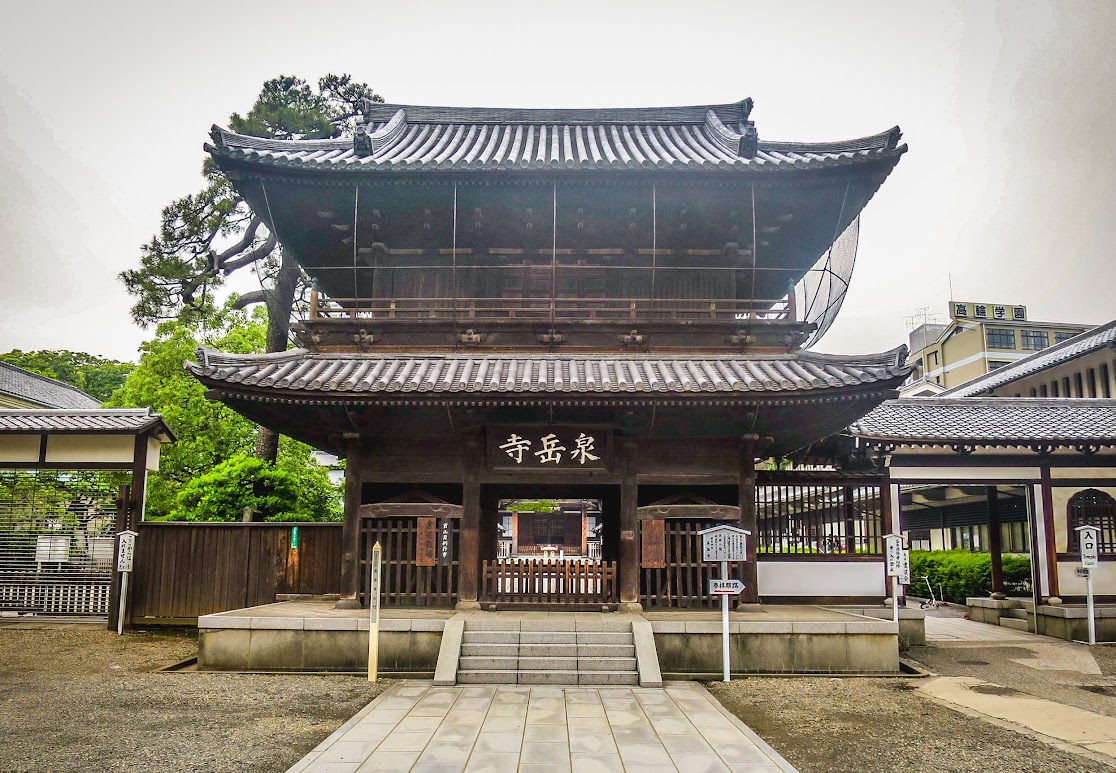 Sengakuji Temple is famous for being the resting place of the legendary 47 Ronin, the folk heroes of an actual historical event in the early 18th century. The story goes that a local daimyo, or feudal lord, was ordered to commit seppuku (ritualized suicide) after being goaded into drawing his dagger, a forbidden act on the grounds of Edo Castle. His lands and assets were confiscated, his family was ruined, and his samurai retainers left master-less (the term ronin means drifter or wanderer, and they were forbidden from taking on a new master). Of the deceased daimyo’s former samurai, 47 of them gathered afterwards and plotted revenge on a man named Kira, the powerful government official who had caused their master’s death. For over a year, they waited until Kira let down his guard, taking on other occupations and behaving like drunkards and fools. Then, on the appointed night, they infiltrated his household and slew the guilty party, laying his head and their master’s dagger on their master’s grave in Sengakuji Temple. One of the ronin was sent as a messenger to spread the news of their vengeance, while the other 46 committed seppuku. The remaining ronin was pardoned by the Shogun (the military dictator and de facto ruler of Japan) and lived to a ripe old age, before being reunited with his comrades at death. The 47 Ronin is considered the national legend of Japan, celebrated for its portrayal of Japanese honour and bushido. Sengakuji Temple, the burial place of the master and his loyal retainers, has been a popular place of pilgrimage ever since. 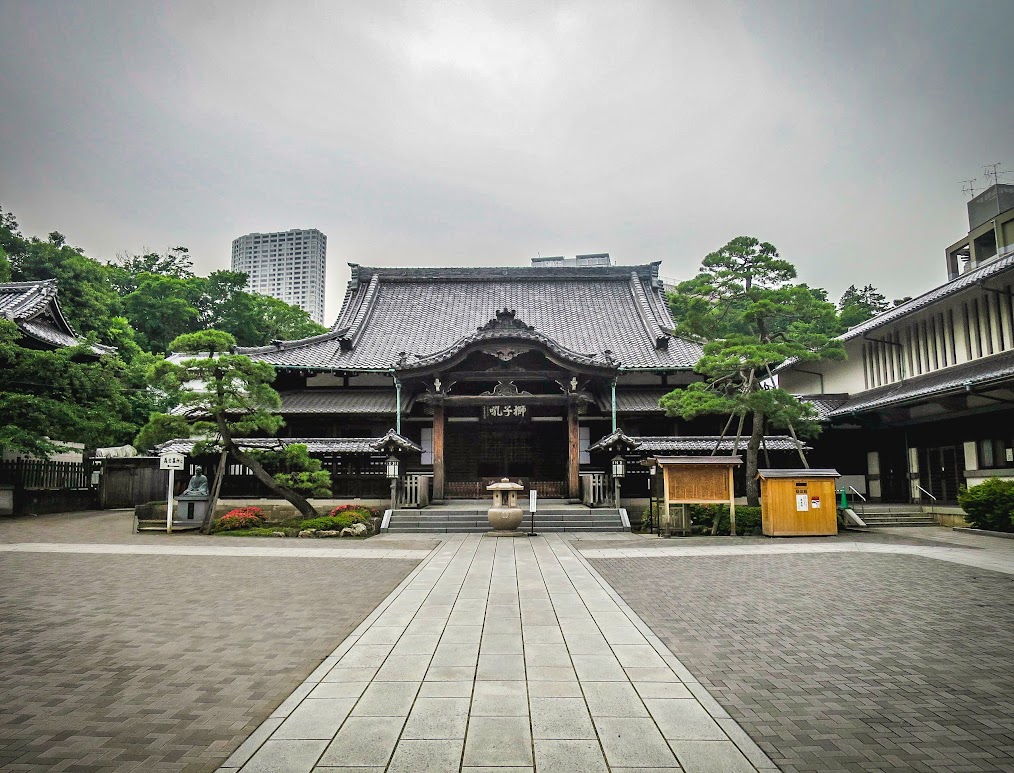 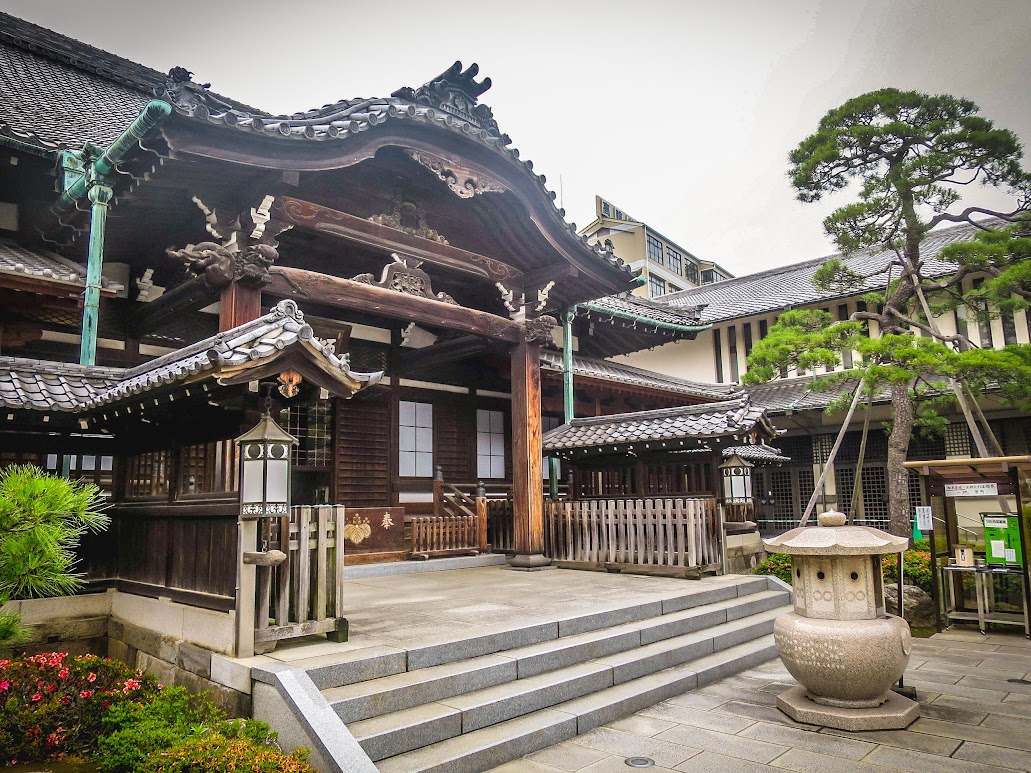 Sengakuji Temple is on a small residential street fronted by low, anonymous buildings, just a short walk from Sengakuji Station. The temple was quiet in the late afternoon, and I sat down on a bench on the eastern edge of the courtyard with one or two other solitary visitors. A small group of kids from a nearby primary school came running in with their scooters and bikes, riding circles around the courtyard and hanging out on the steps to the side. In the serene temple complex that afternoon, the only sounds were the chatter and laughter of the children as they waited for their parents to pick them up. It seemed like each temple I had seen in Tokyo had a different feeling or vibe, whether it was festive and public at Sensō-ji, private and secluded at Kanda Myōjin, or solemn and sacred at Zōjō-ji. At Sengakuji, it felt more like a shared community space, a place where pilgrims remembered the days of old, tired visitors rested on wooden benches, and neighbourhood kids chatted merrily in the corridors. As the evening hours approached, I grabbed my bag and hopped back onto the metro to Roppongi, where Ashley and I had evening plans with friends. 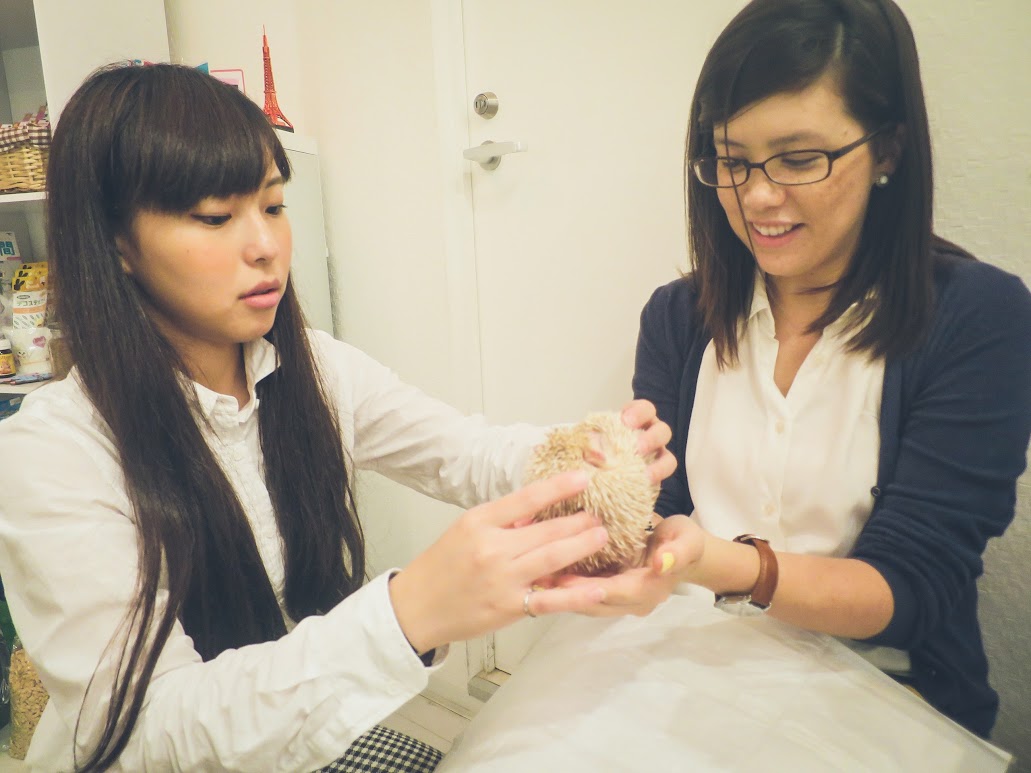 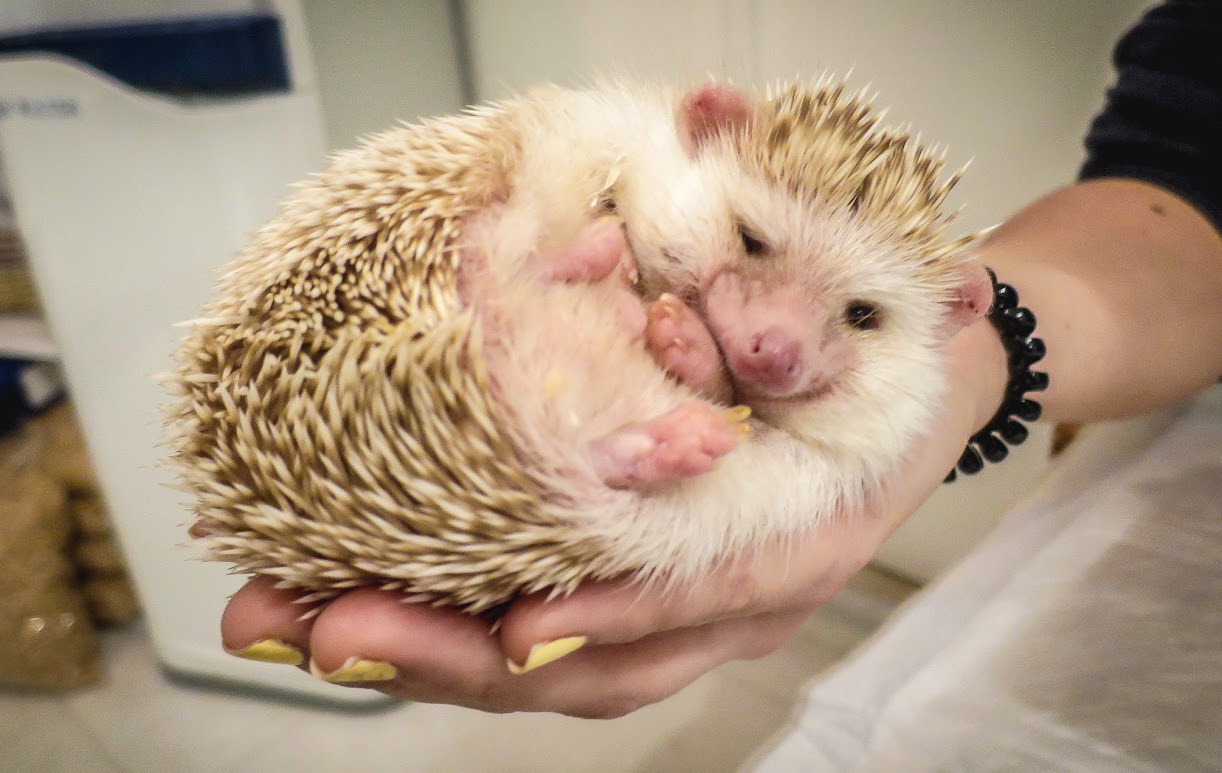 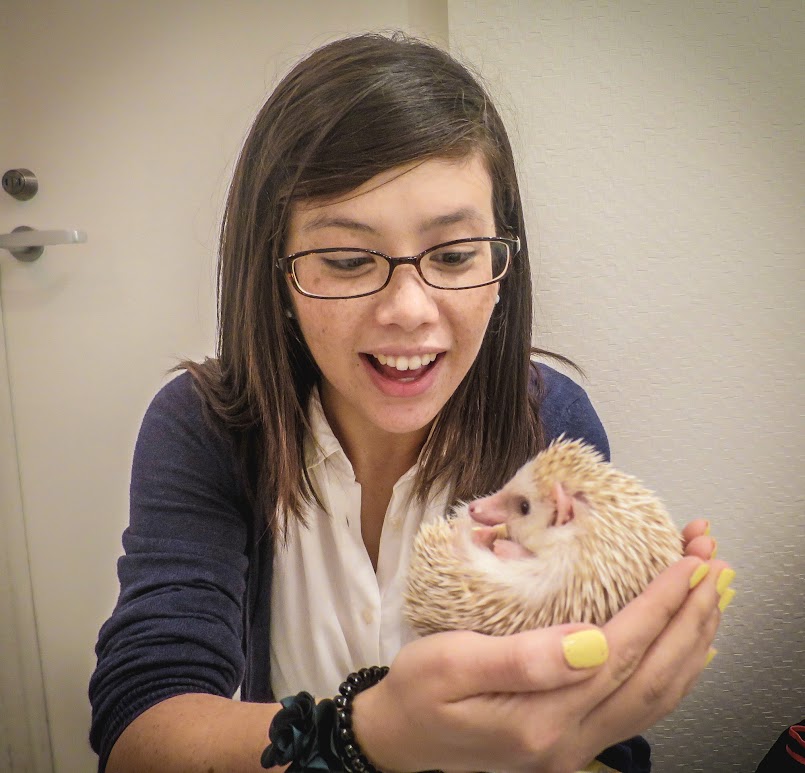 Within Tokyo café culture lies a certain subset of novelty cafés where the menu takes a backseat to the theme, be it maids, butlers, cartoon characters, or whatever other fantasy might appeal to the dreamer in you. Customers frequent these dress-up establishments to either seek out some facsimile of an experience that does not exist, or to indulge in ironic cross-cultural experiences that tend to exaggerate existing caricatures of urban Japan. There are some places, though, where the novelty is not a person, or an idea of a person. Numerous animals cafés abound in Tokyo’s busy neighbourhoods, giving customers the opportunity play with dogs, cats, bunnies, and other pets-for-hire, creating the illusion of animal companionship – for a nominal fee. Ashley and I had little interest in a maid café, but when we heard about a hedgehog and bunny cafe by our hotel, we couldn’t resist. 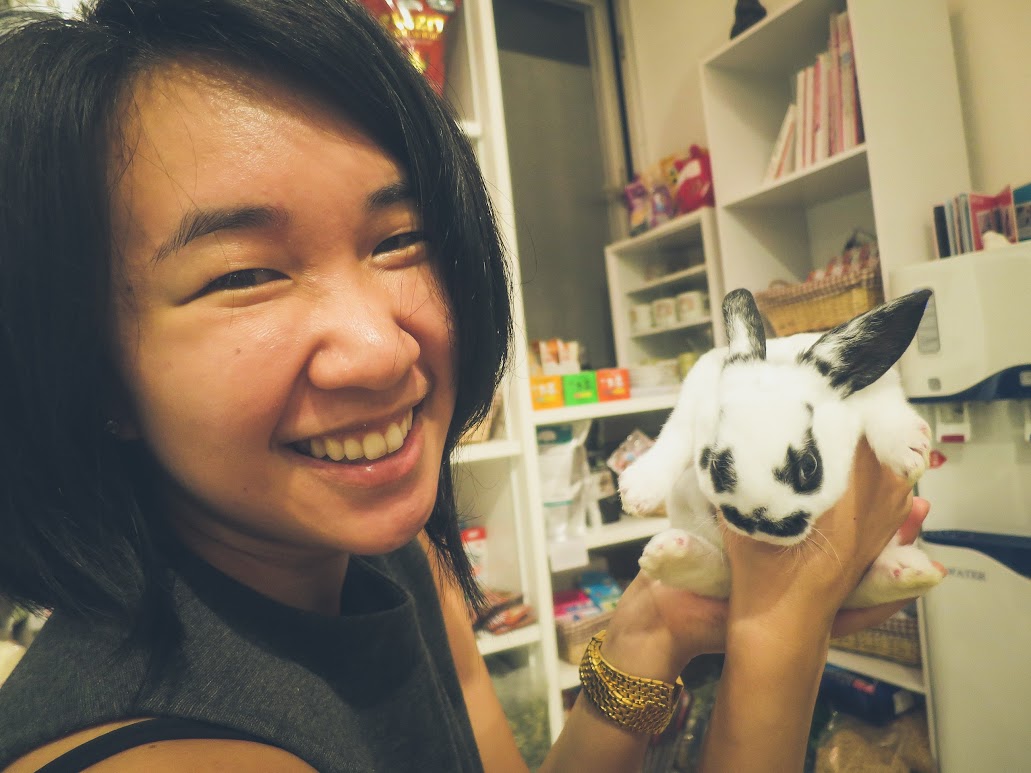 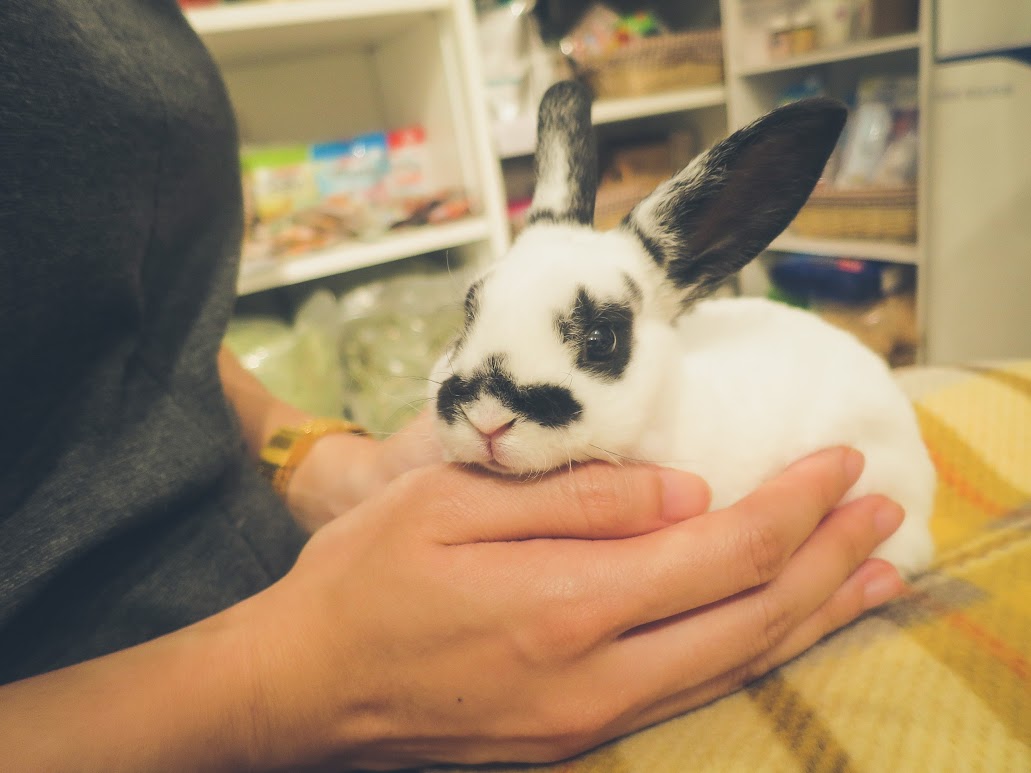 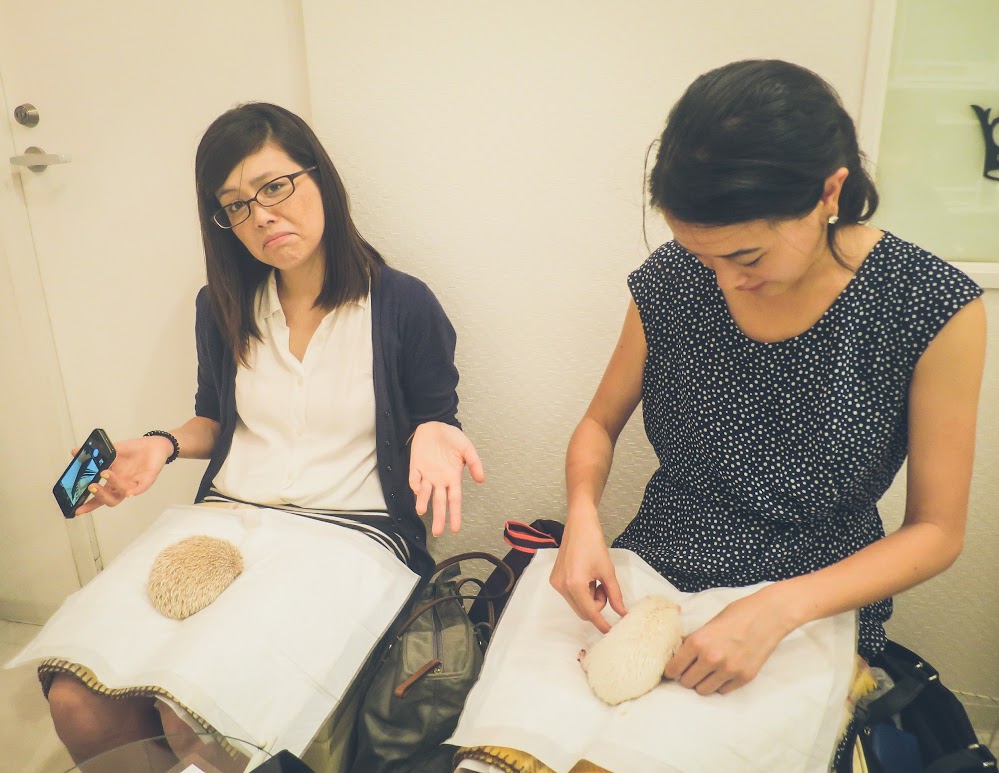 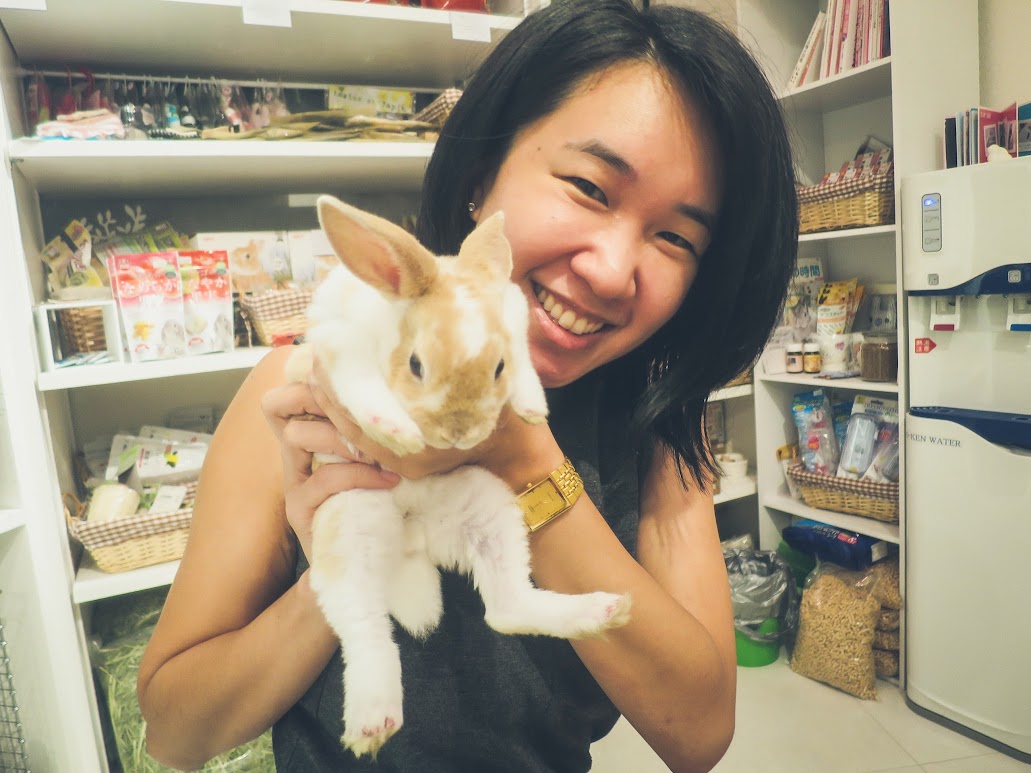 We had talked about finding a hedgehog café the night before at our delicious Manten Sushi dinner with Sam and Jean, and we found one in Roppongi called Harry. When we arrived, it was around 7:00 pm, and there were maybe 2 or 3 other customers sitting on cushioned seats, so we pretty much had the run of the place. I started out with a hedgehog, and I was more excited than I’d like to admit. Growing up in a pet-less household, I’d always envied friends with dogs, cats, gerbils, and hamsters, and Ashley and I talk constantly about one day getting a dog. The attendant came back to my seat with the little ball of fur and placed it gently in my hands. The hedgehog was surprisingly prickly, and, though we were shown how to play with it, it mostly just rolled into a ball and slept. 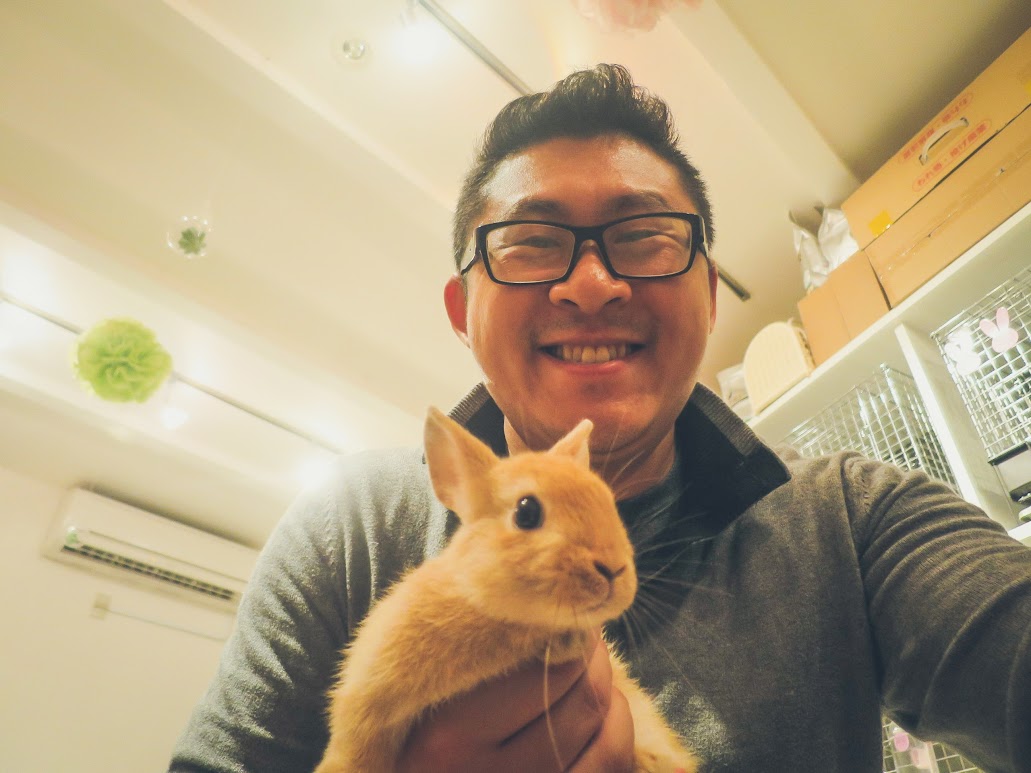 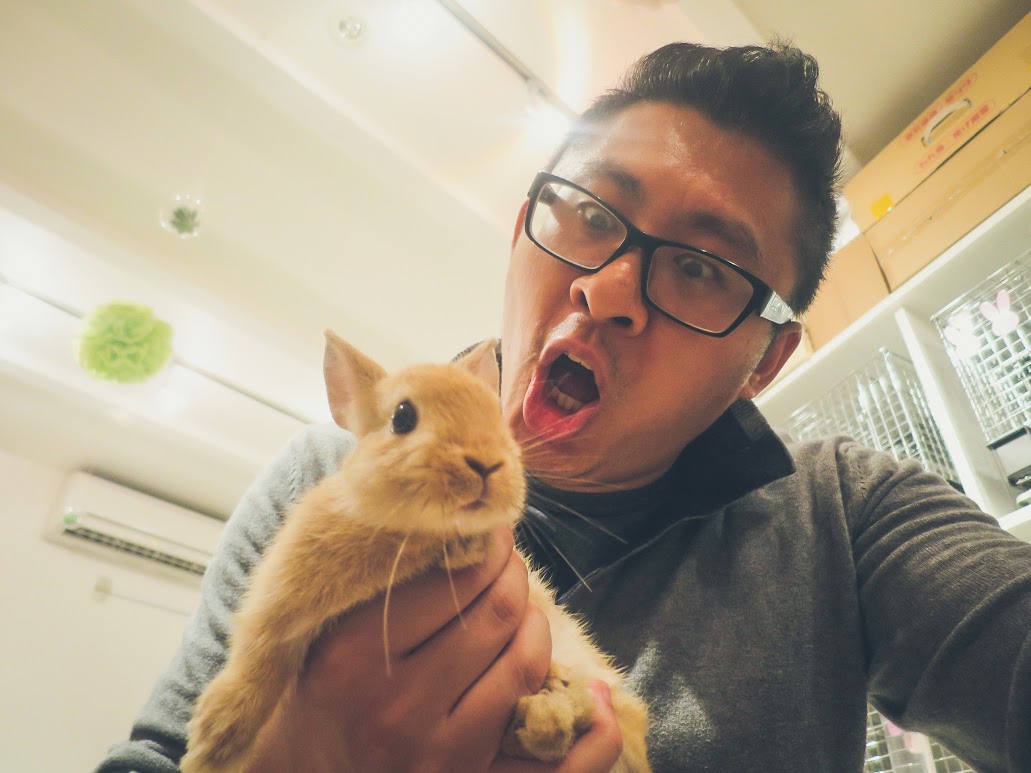 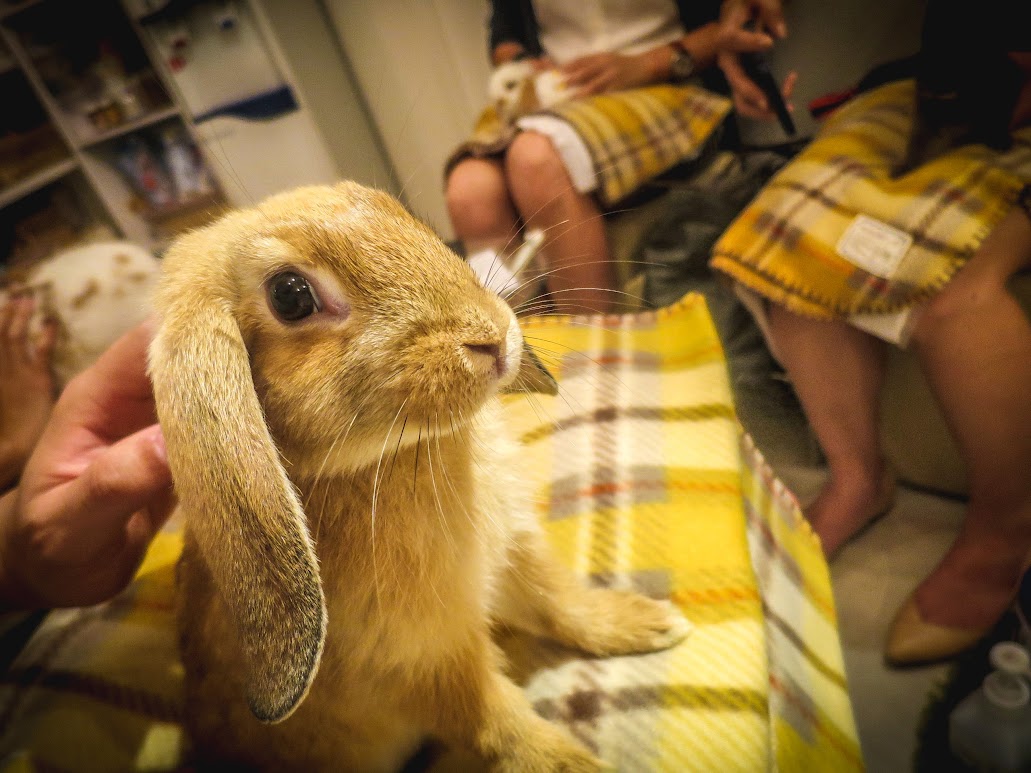 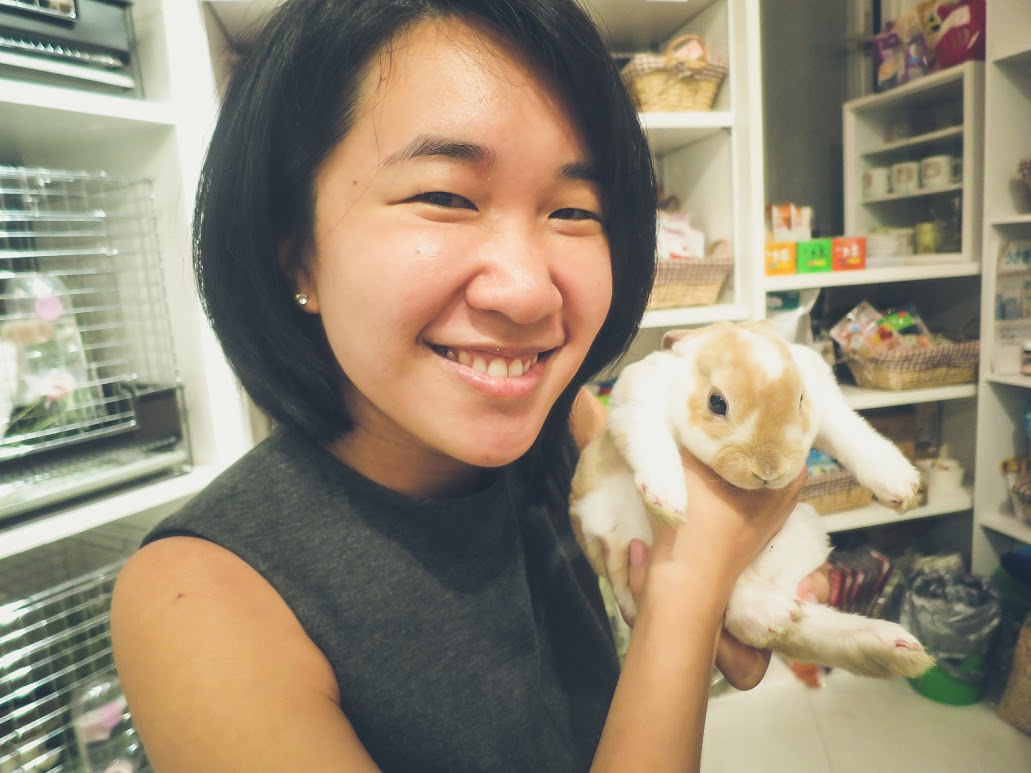 We played with some of the bunnies as well, and it was clear that they each had different temperaments. Some were sleepy and lethargic, others were active and jumpy, and one was a serial biter. Ashley much preferred the long-eared bunnies over the prickly hedgehogs, though, to be fair, the bunnies were much more interactive. I don’t think we actually ate or drank anything at the cafe – there were some boxed and bottled drinks available but we ignored them – so we pretty much paid to hang out with hedgehogs and bunnies for an hour. 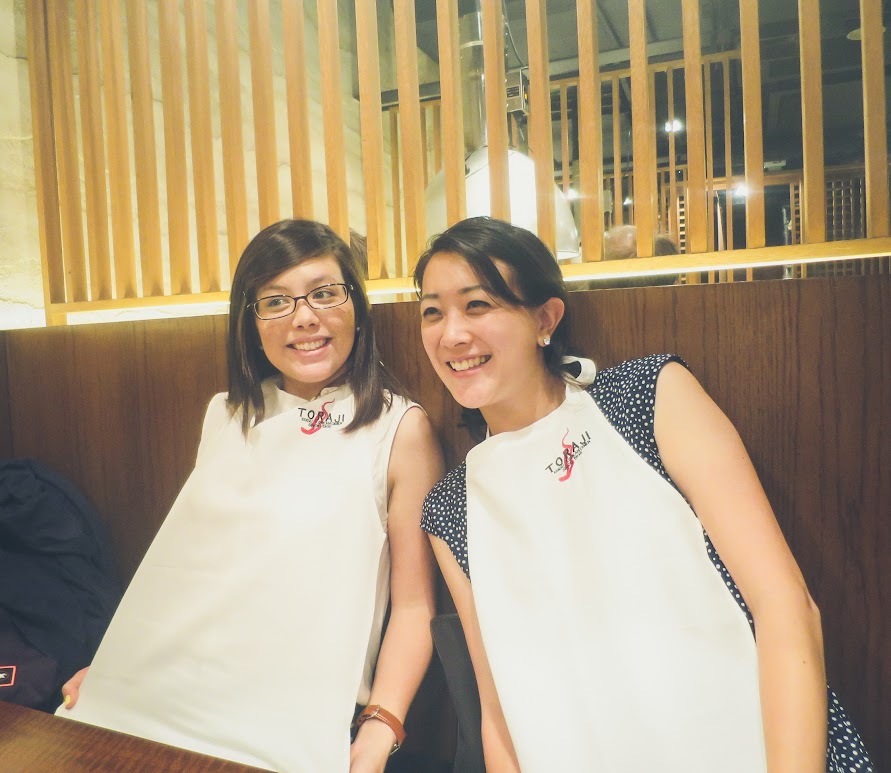 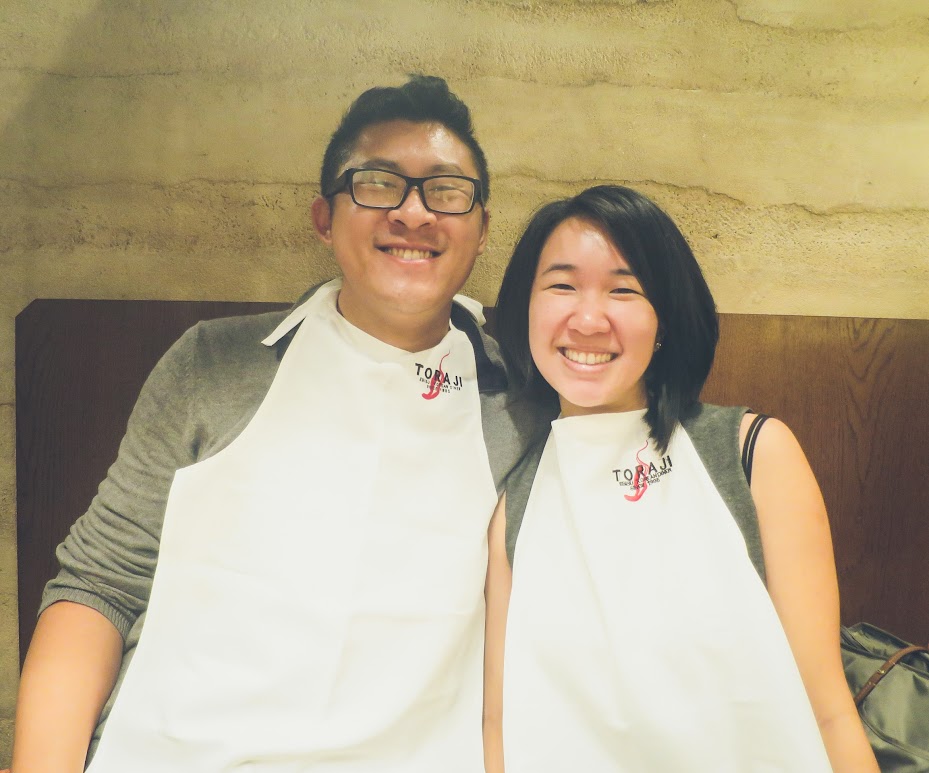 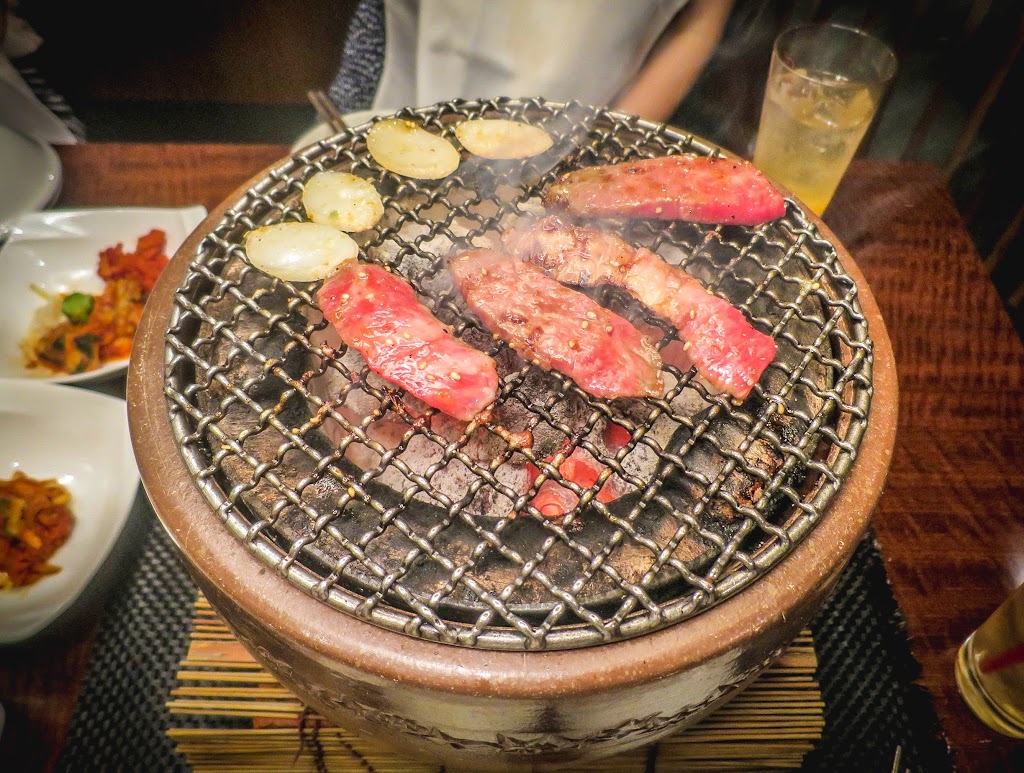 Dinner afterwards was at a nearby Korean barbecue restaurant.  It wasn’t very memorable – not good enough to be remembered, not bad enough either – and I think we decided on it after too much walking around being indecisive. We thought about going for drinks afterwards, but we were all pretty tired from work and play, so we called it a night and said our goodbyes. Ashley and I headed north to our hotel in Nihonbashi, where we spent several minutes at a small counter opposite the elevators stocking up on free toiletries. We settled into our cozy room, put on our matching, hotel-provided pajamas, and tried to get some much-needed rest. The following day would be our only full day together in Tokyo, and we wanted to make the most of it. 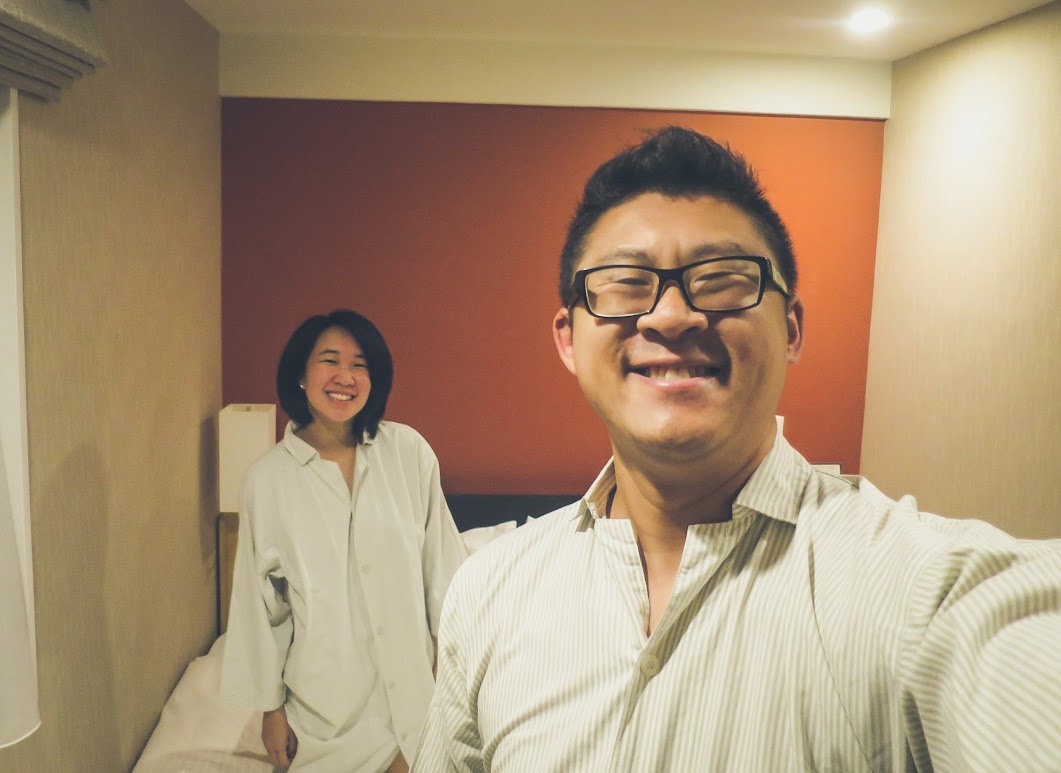