After spending most of the previous afternoon walking through parts of Okinawan history, we took our holiday in a different direction on our last full day on the island. Ashley and I both enjoy sports, but I tend to lean towards team-based activities, while she prefers more individual pursuits. When this trip was still in its early planning stages, I came across something called Forest Adventure in Okinawa, a zip-line and ropes course set up in a forested valley not far from Cape Maeda. It sounded like something Ashley might enjoy, so, despite my fear of heights and terrible sense of balance, I went ahead and booked a slot for us through their website.

That morning, we were given a brief safety demonstration before we stepped onto the course, making sure that our harnesses were strapped in properly and teaching us how to use the various clips and cables to avoid death by gravity. There was a small practice area where we could glide through some short zip-lines and get used to clipping ourselves onto the safety ropes, and, after being suitably assured that we knew what we were dong, the instructor gave us a quick wave and sent us on our way. I had done zip-lining before, so that wasn’t much of an issue, but I wasn’t looking forward to walking on ropes suspended above valley floors. The first few stations were mostly zip-lines, though, and we got some great views of the ocean in the distance as we flew through the air, swooping from treeline to treeline, bursting through gaps in the forest and braking into piles of wood chips. The rope bridges were manageable as well, at least at first, and, besides a few sore muscles, the first half of the course was downright pleasant. At the halfway point, there was a picnic table with a cooler full of complimentary ice-cold drinks, and we sat down to catch our breath and re-hydrate before moving on to the more challenging obstacles ahead of us. 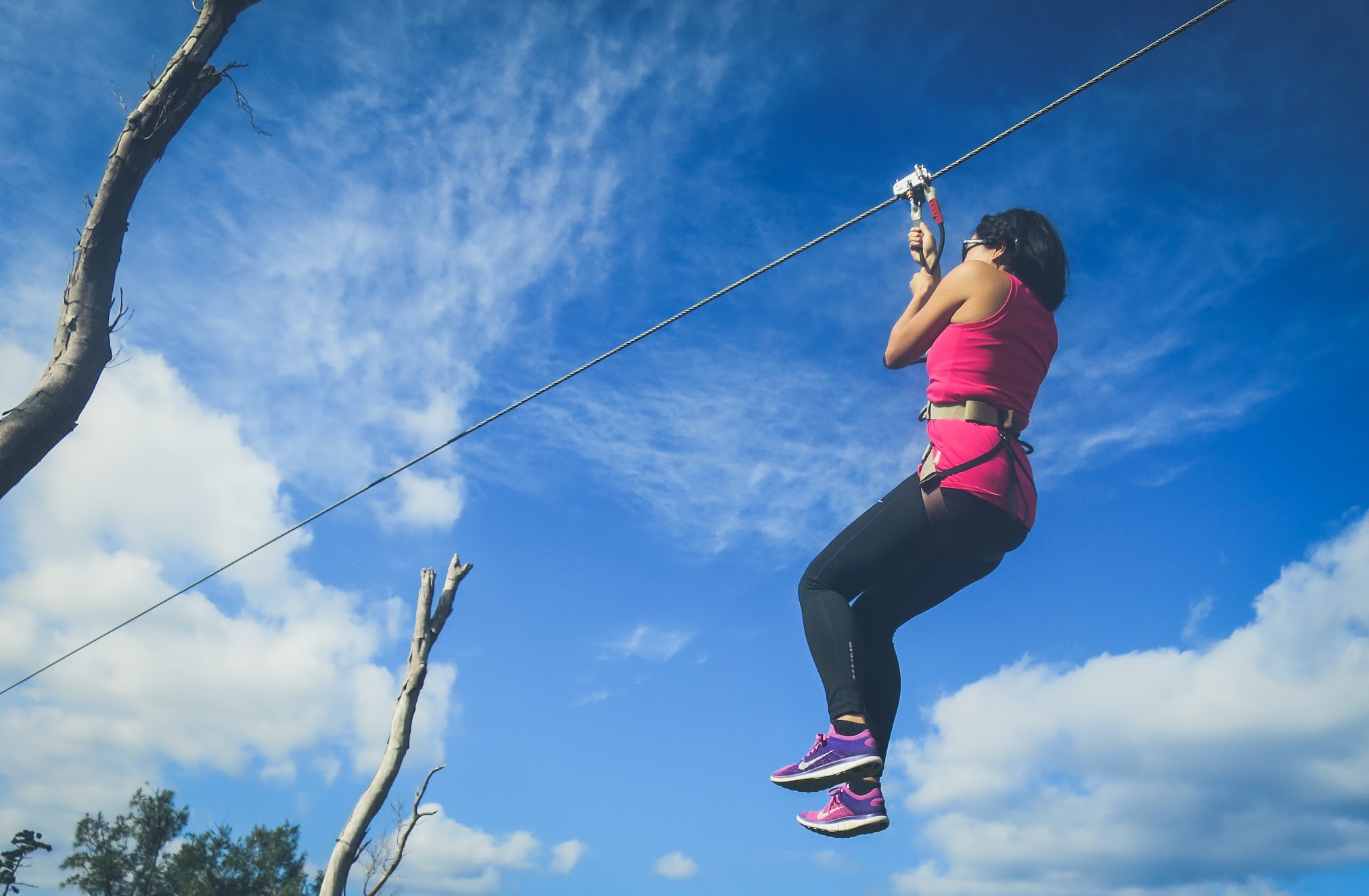 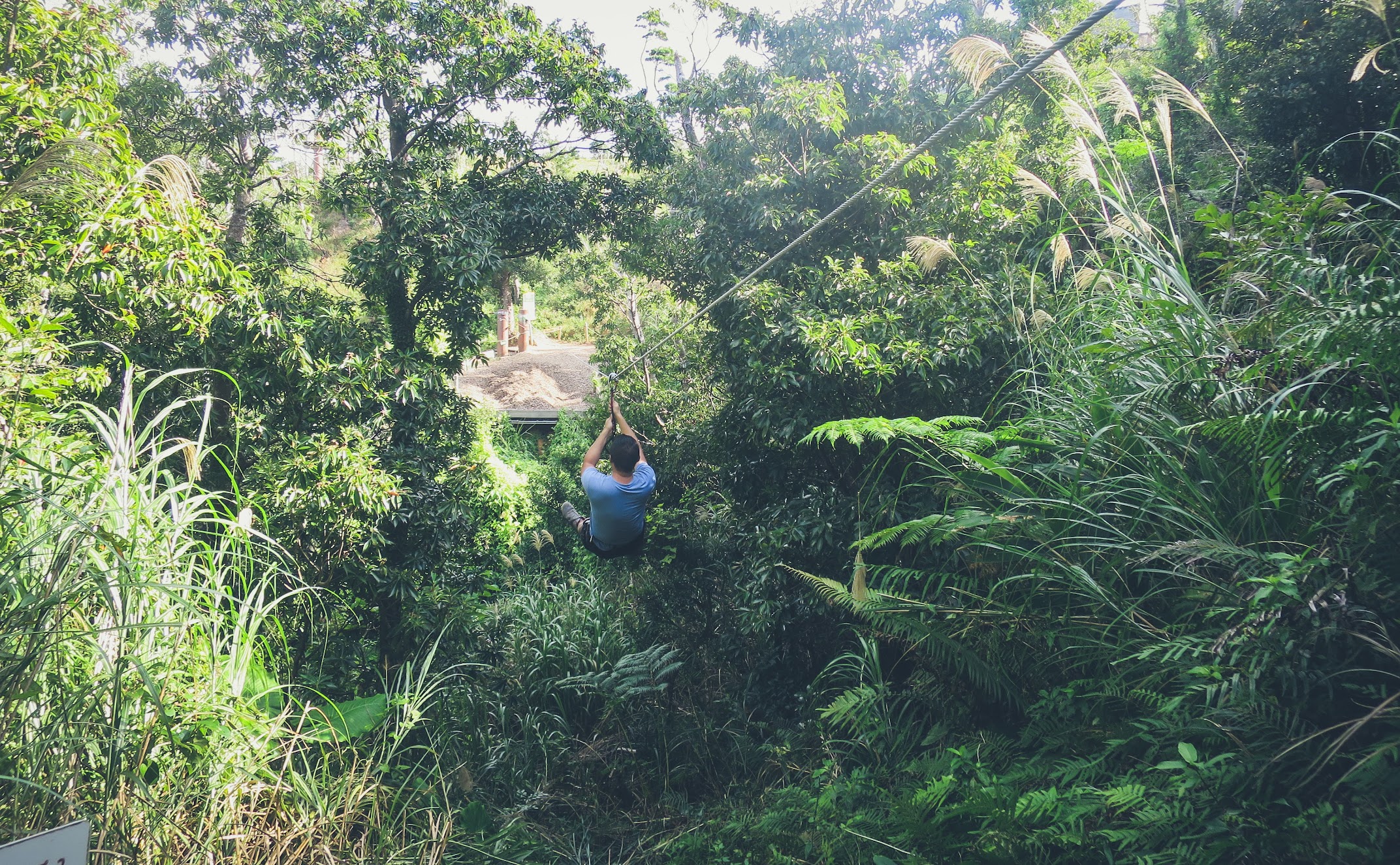 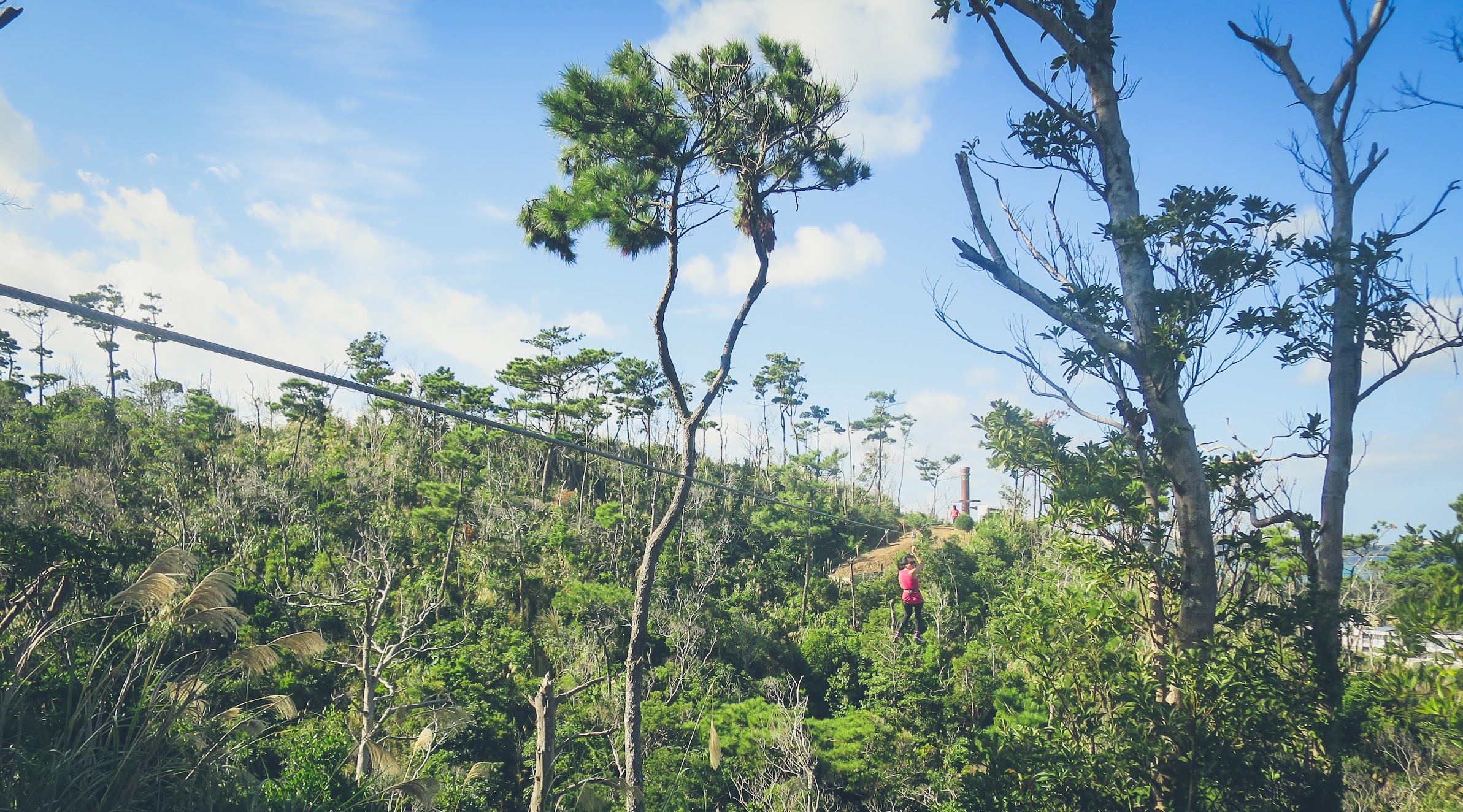 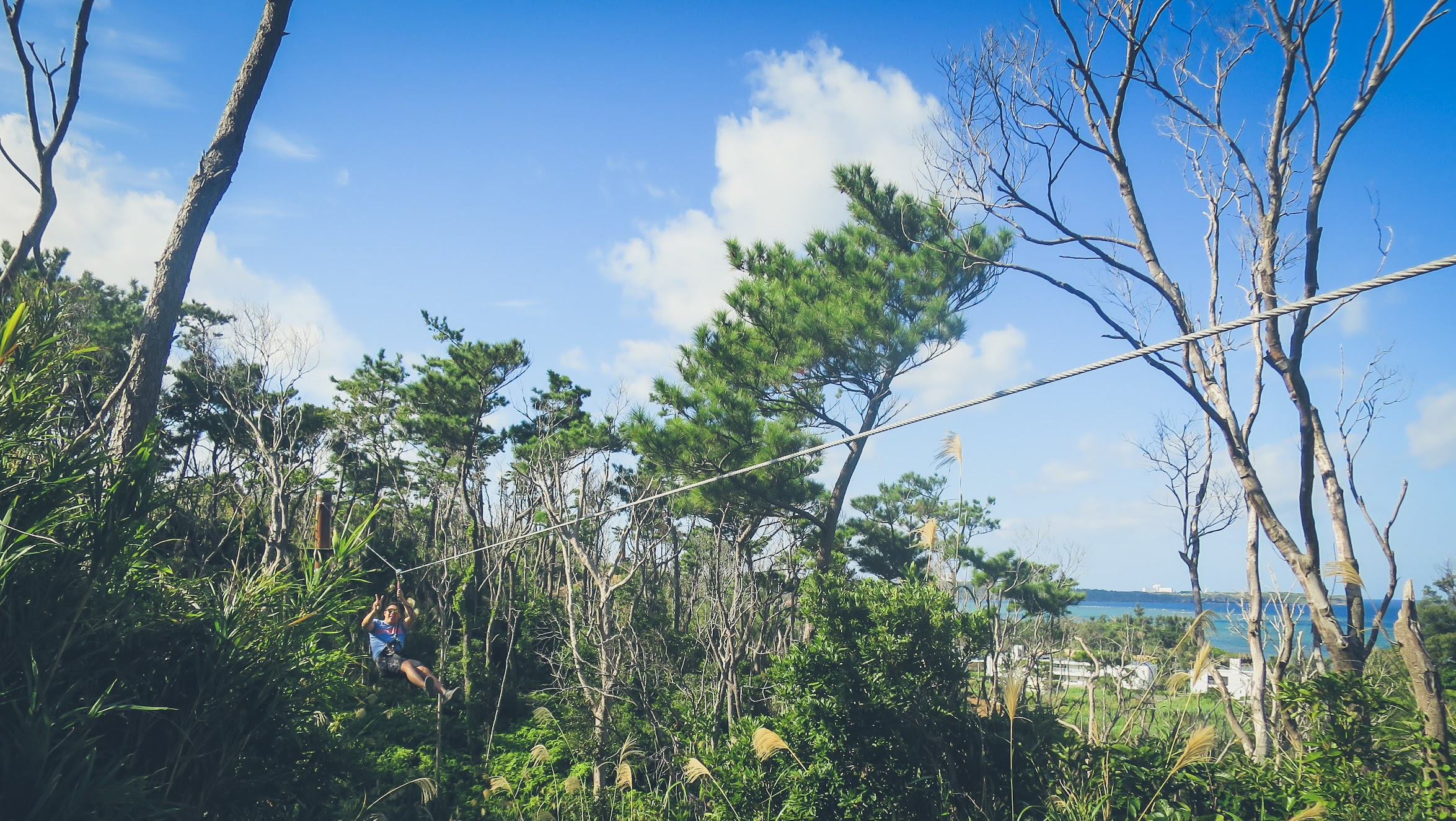 The Forest Adventure in Okinawa folks kicked it up a notch after the midway point, as the wooden columns holding up the zip-lines and platforms doubled in height, terrifying me to no end. Dragging my not-insignificant mass up those tiny ladders was no easy task, and transitioning from the ladder to the platform, while avoiding what seemed like imminent death, had my heartbeat ringing loudly in my ears. In one alarming sequence, we had to zip-line onto one platform, climb up to another platform twice as high, grab a rope and jump off the second platform, swing across the great green void, crash into a rope netting and hang on for dear life, and climb across the web to the next platform. I then felt the shadow of despair come over me when I realized the only way forward from that last platform was to walk across a set of precariously-balanced, vertically-oriented wooden cylinders.

Ashley had a blast, though, scurrying up ladders and stepping lightly from one tiny foothold to the next. Whenever the course presented two options forward, she always picked the more difficult path. In fact, the only thing she really seemed concerned about was the speed of some of the steeper zip-lines. Back in our day-to-day lives in Hong Kong, I’m usually the one with more time after work, and I’ve played in the local Ultimate leagues for the last few years. Team-based sports is what I grew up with, and I get a lot of satisfaction out of accomplishing things as part of a group, so even though I’m not terribly good at the game, I still get my fix every week or so. Ashley’s job can be a lot more demanding, time-wise, however, and she rarely gets a chance to go out and challenge herself, physically. So I’m glad we were able to swing and glide through the jungle that morning, even if it made me queasy at times, because it made her happy.

After we unhooked ourselves from the last zip-line, happy and elated for slightly different reasons, we made our way back to our car down below. The calm sheet of ocean blue had beckoned to us from our treetop perches all morning, and we were all too eager to answer the call. 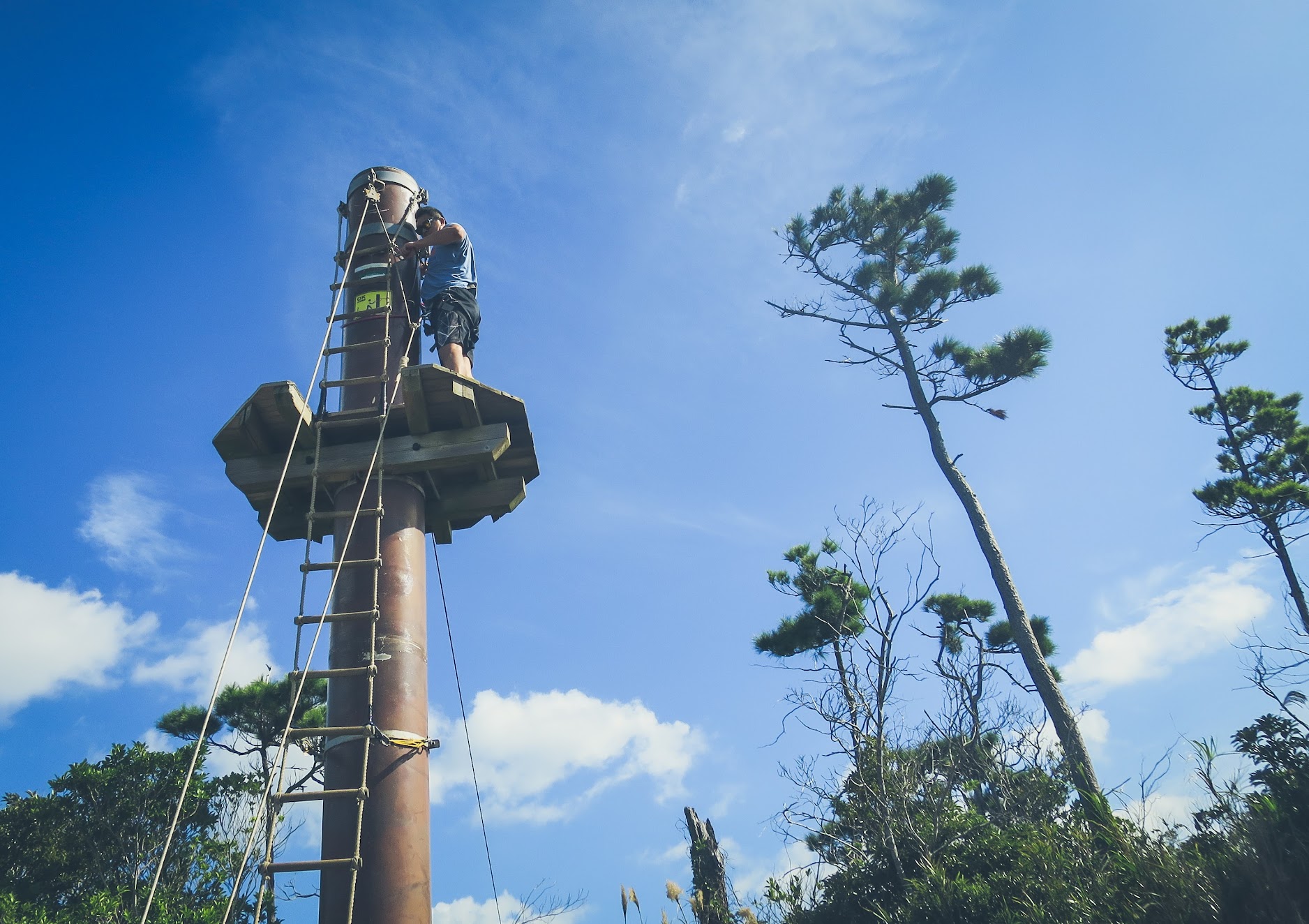 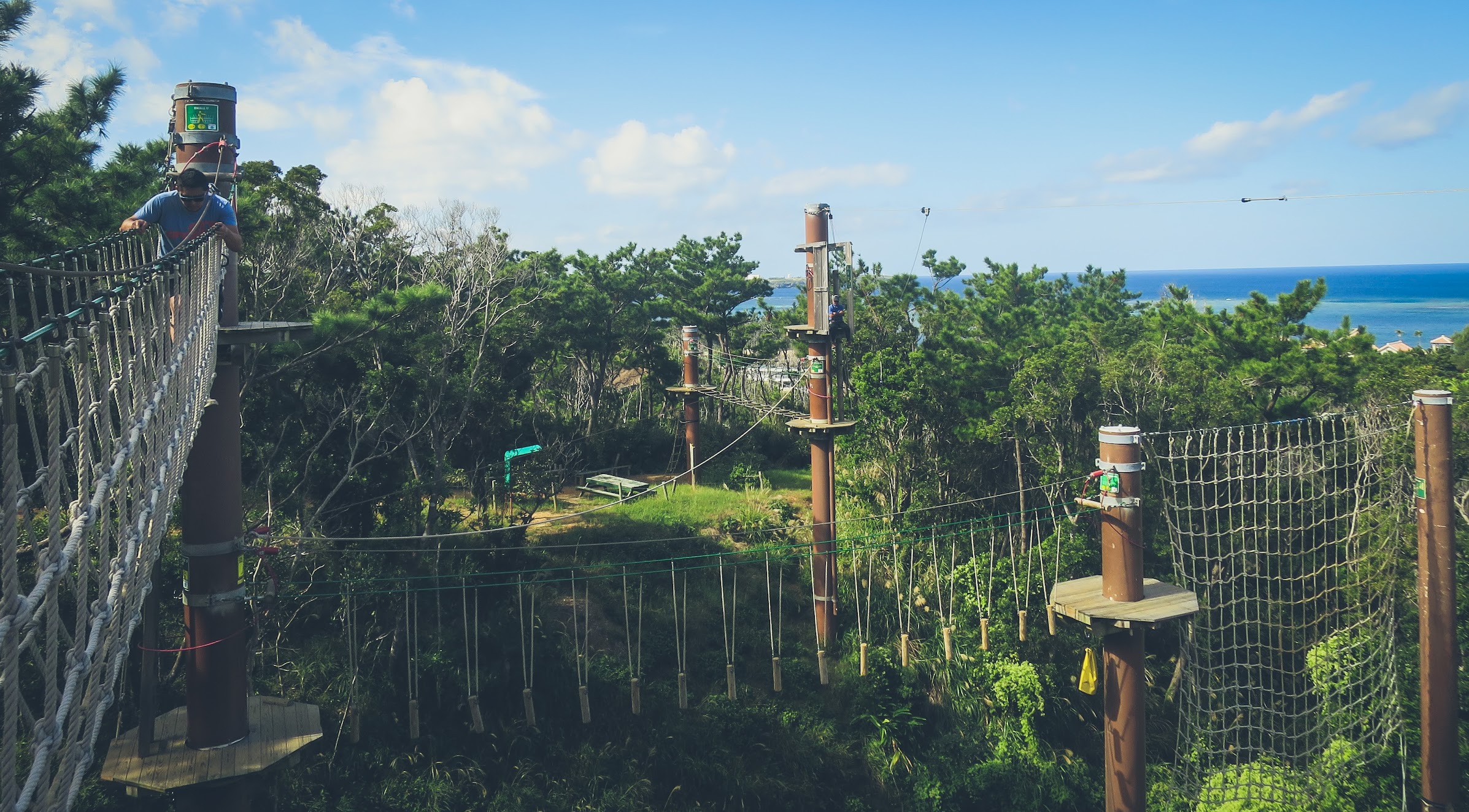 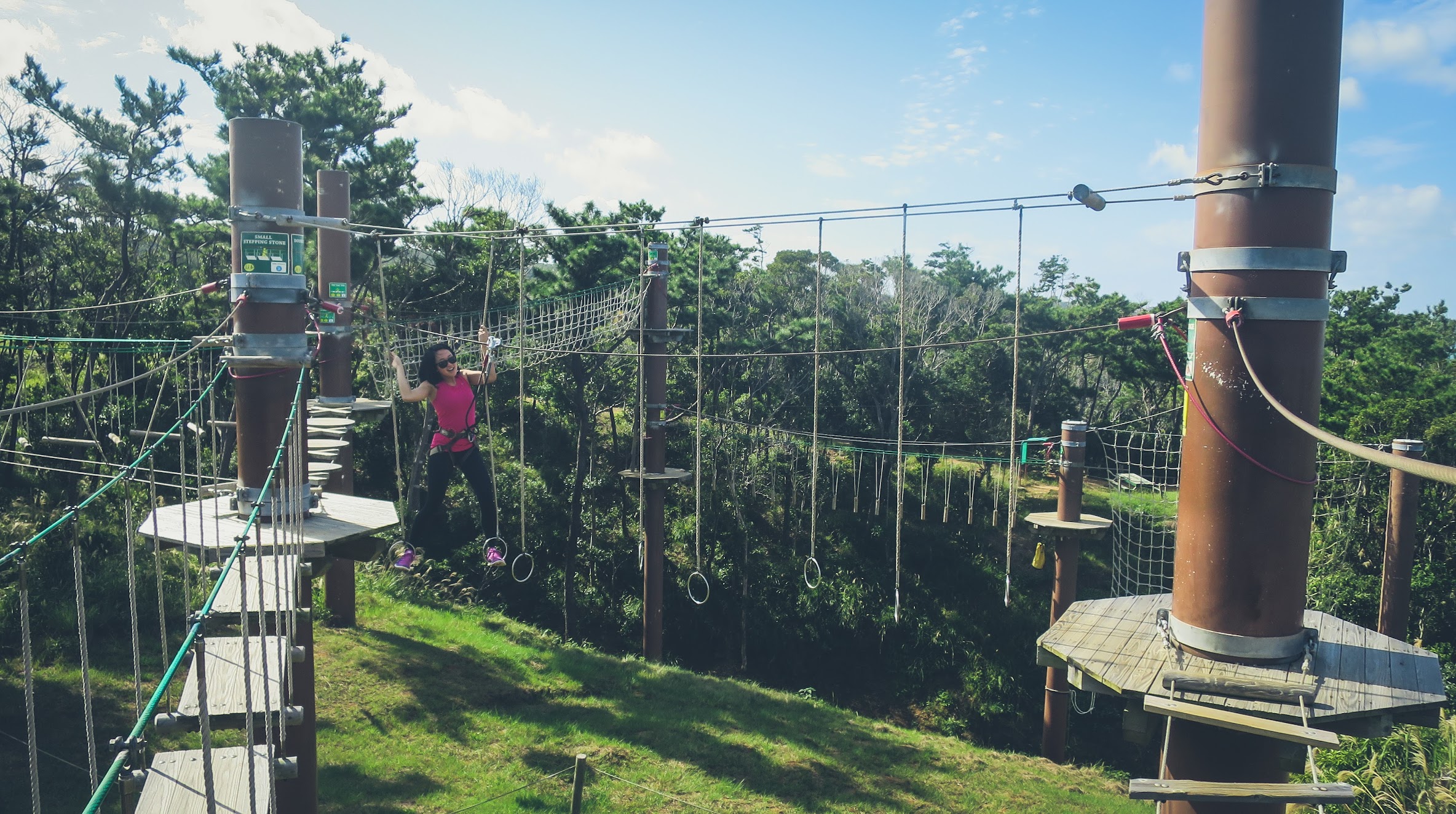 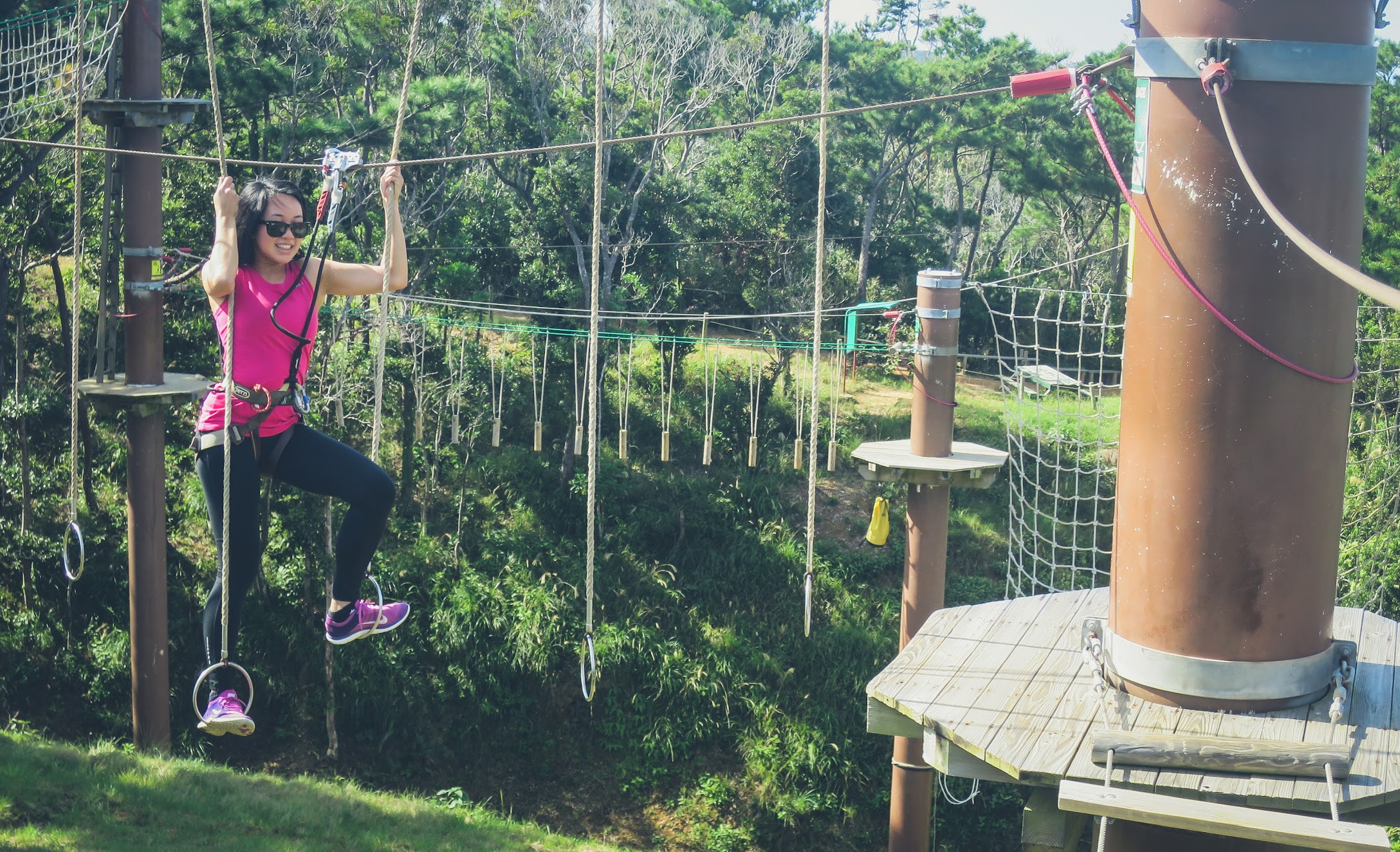 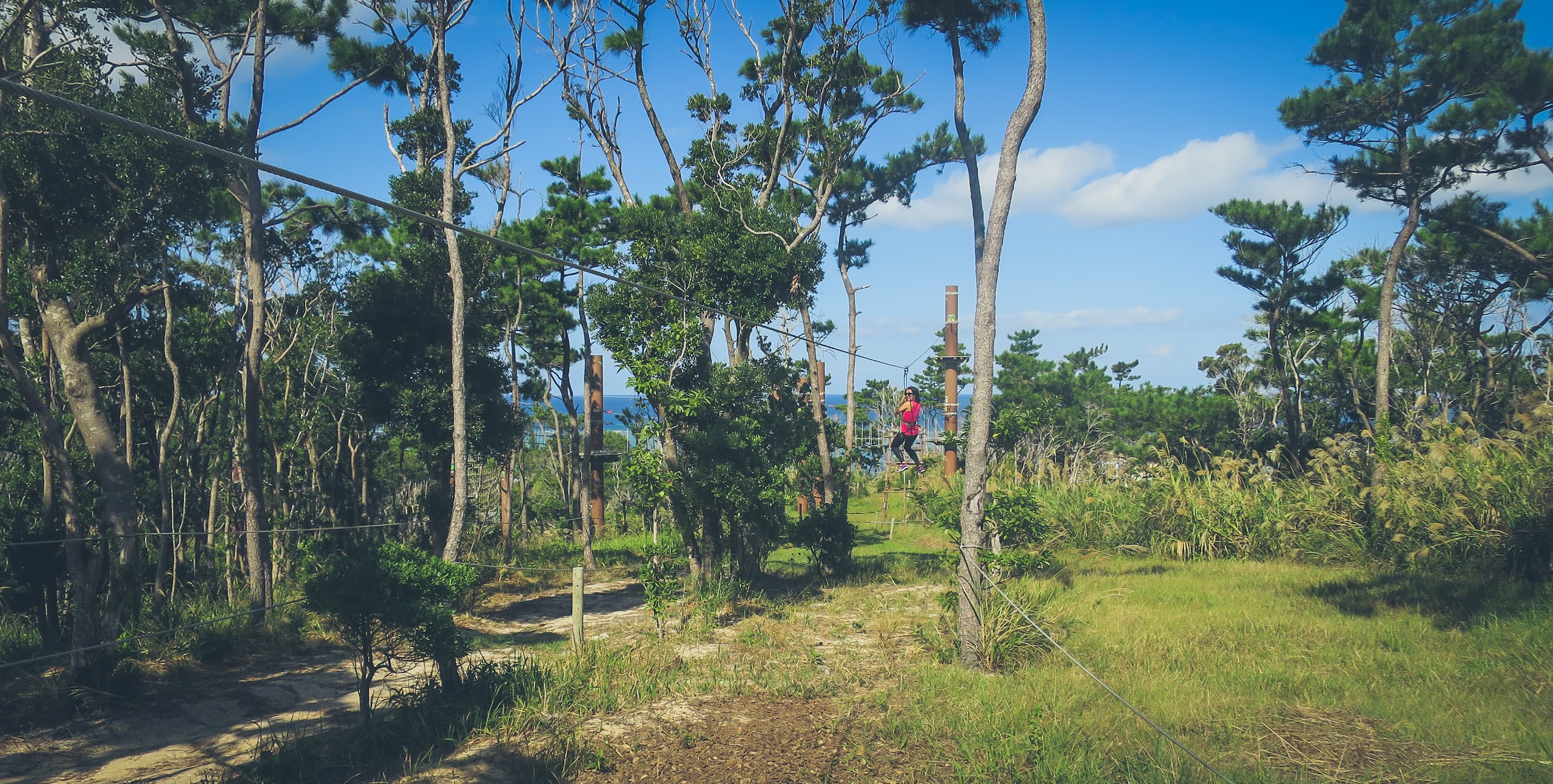 Sealovers Okinawa is one of dozens of dive shops catering to holiday-goers on the main island. I don’t know if there’s too much difference in quality between any two shops, and I’m pretty sure we chose Sealovers because of the price. Our particular package included entrance into the fabled Blue Cave of Cape Maeda, as well as some snorkeling time by the cape and feeding the fishes. It was a small group of us that set out from the harbour across the bay that afternoon, and it took around 15 to 20 minutes for our boat to reach the drop-off point. Our first stop was the Blue Cave, a natural cavern carved out of the cliffs, its famous blue hue a result of sunlight filtered through the sea and reflecting off the white limestone floor. It’s not very big inside, but I can confirm that it is indeed very blue, and quite beautiful. After we vacated the cave to make way for the next group, we swam out towards the open water, where we were given handfuls of some sort of glutinous fish food. As soon as we dipped our hands into the water, dozens of fish swarmed our tightly-closed fists, pecking at our fingers and wrists to get at a familiar meal. With the ocean’s smaller denizens milling about, we snorkeled in the area for a while, trying to take non-blurry pictures with our borrowed waterproof camera, until our guide gave us the signal to get back to the boat, and back to dry land. 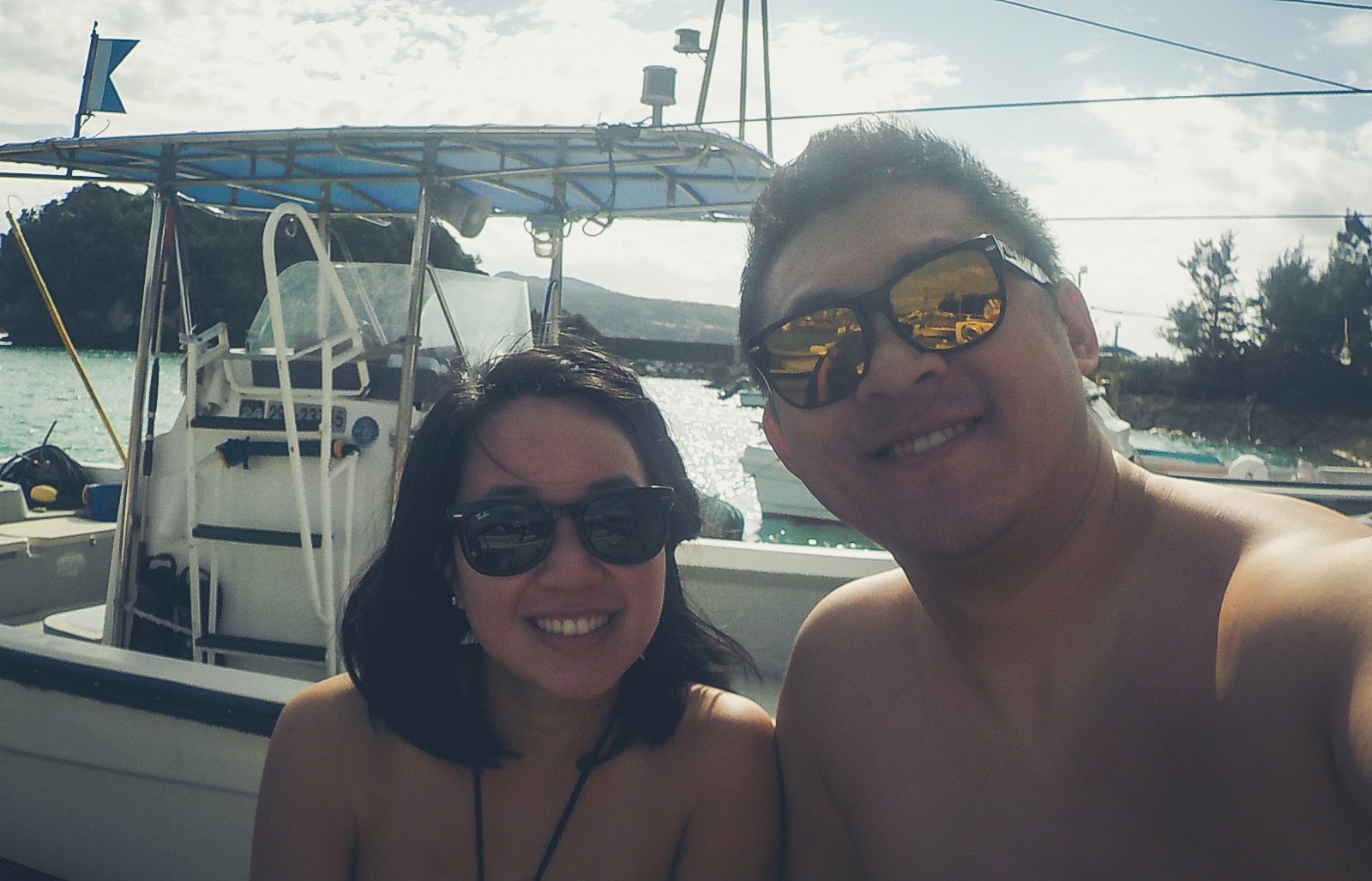 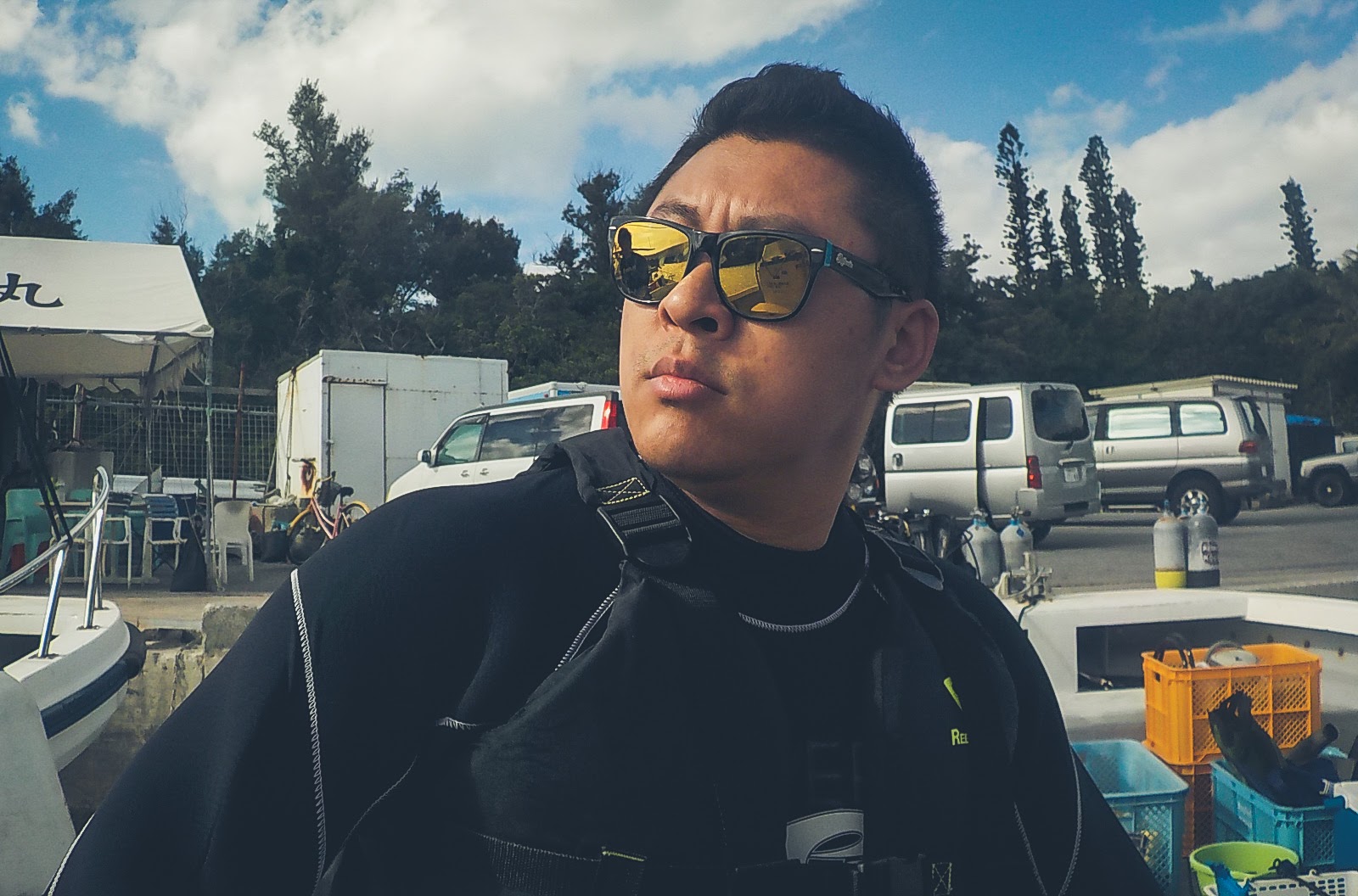 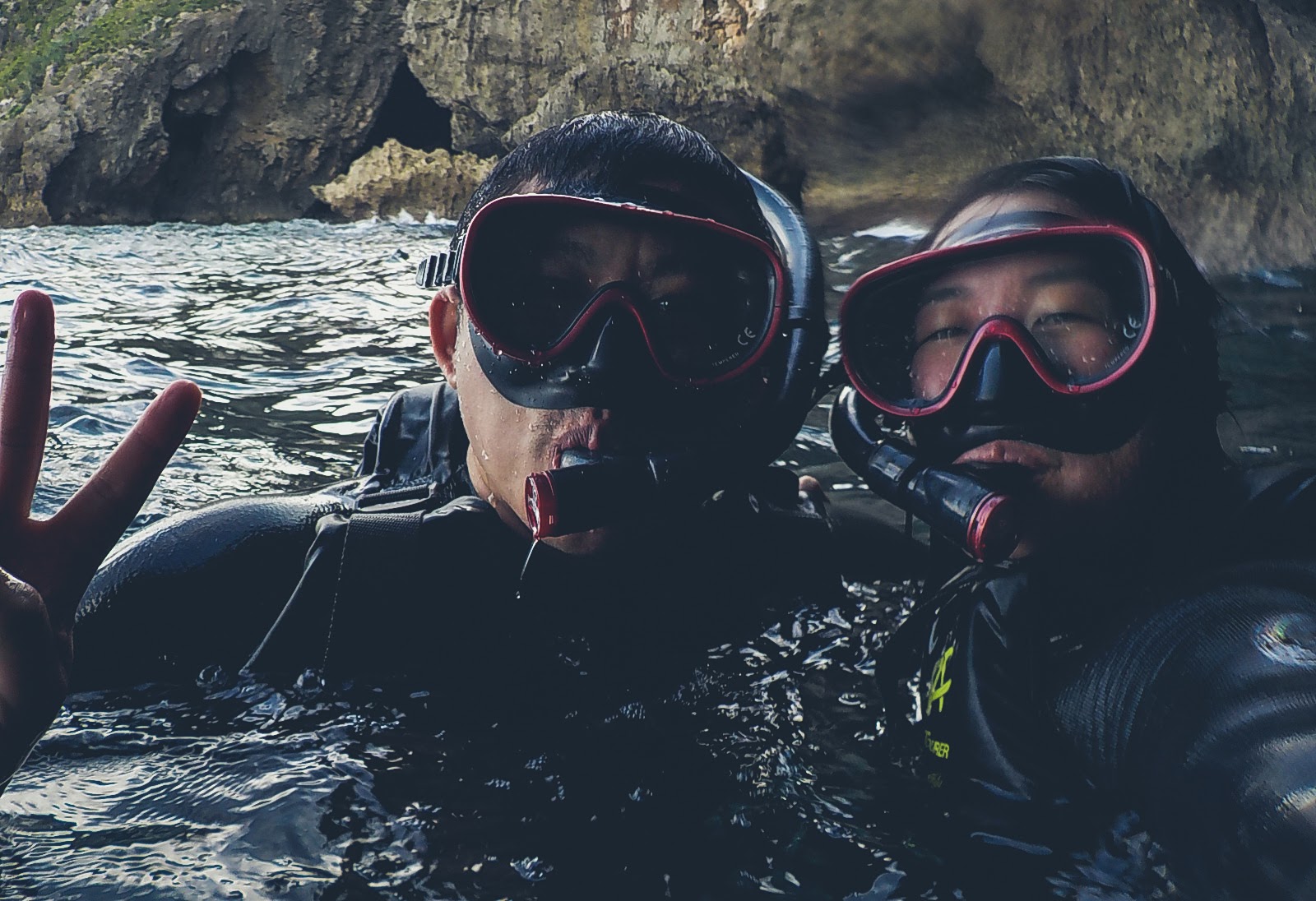 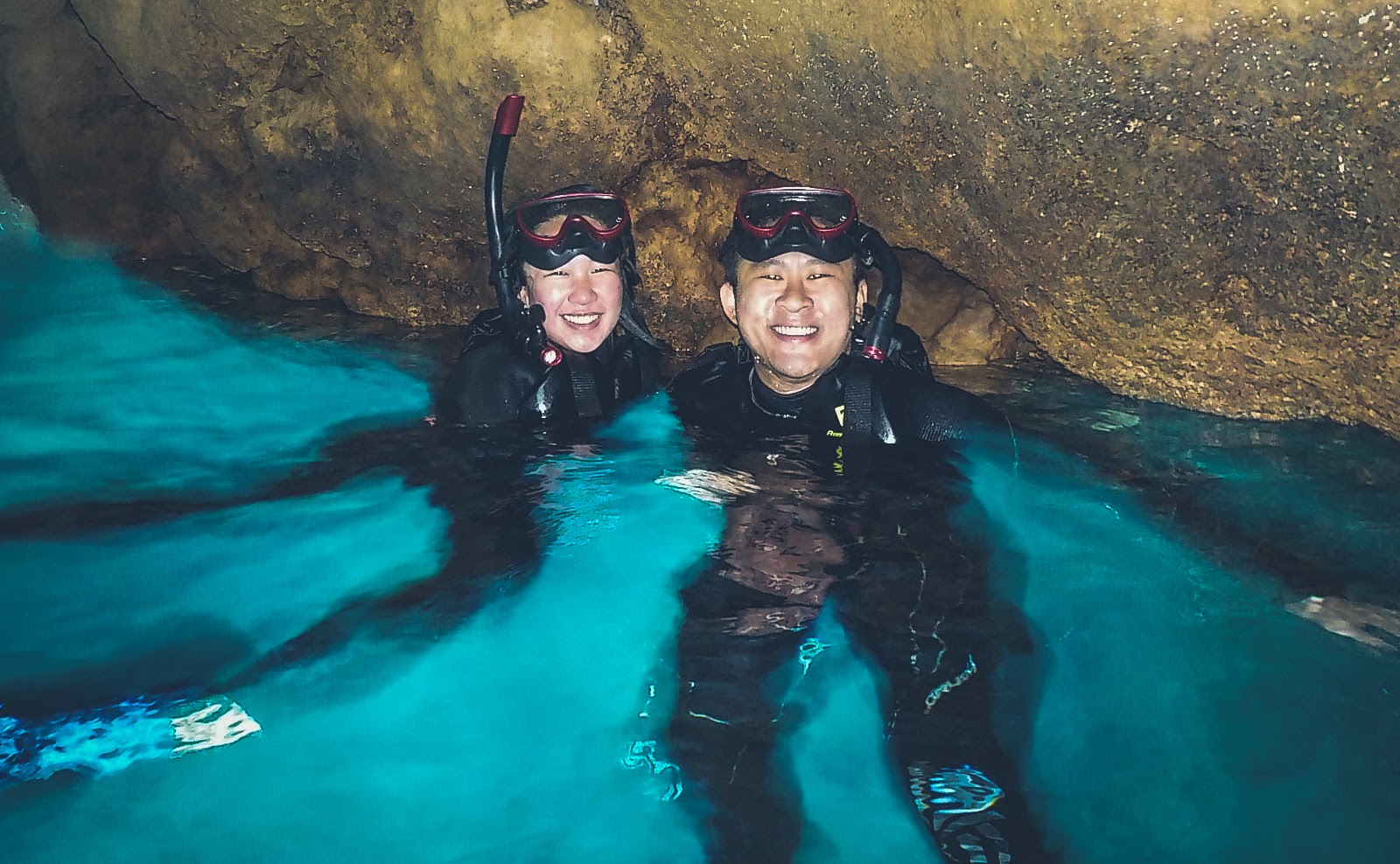 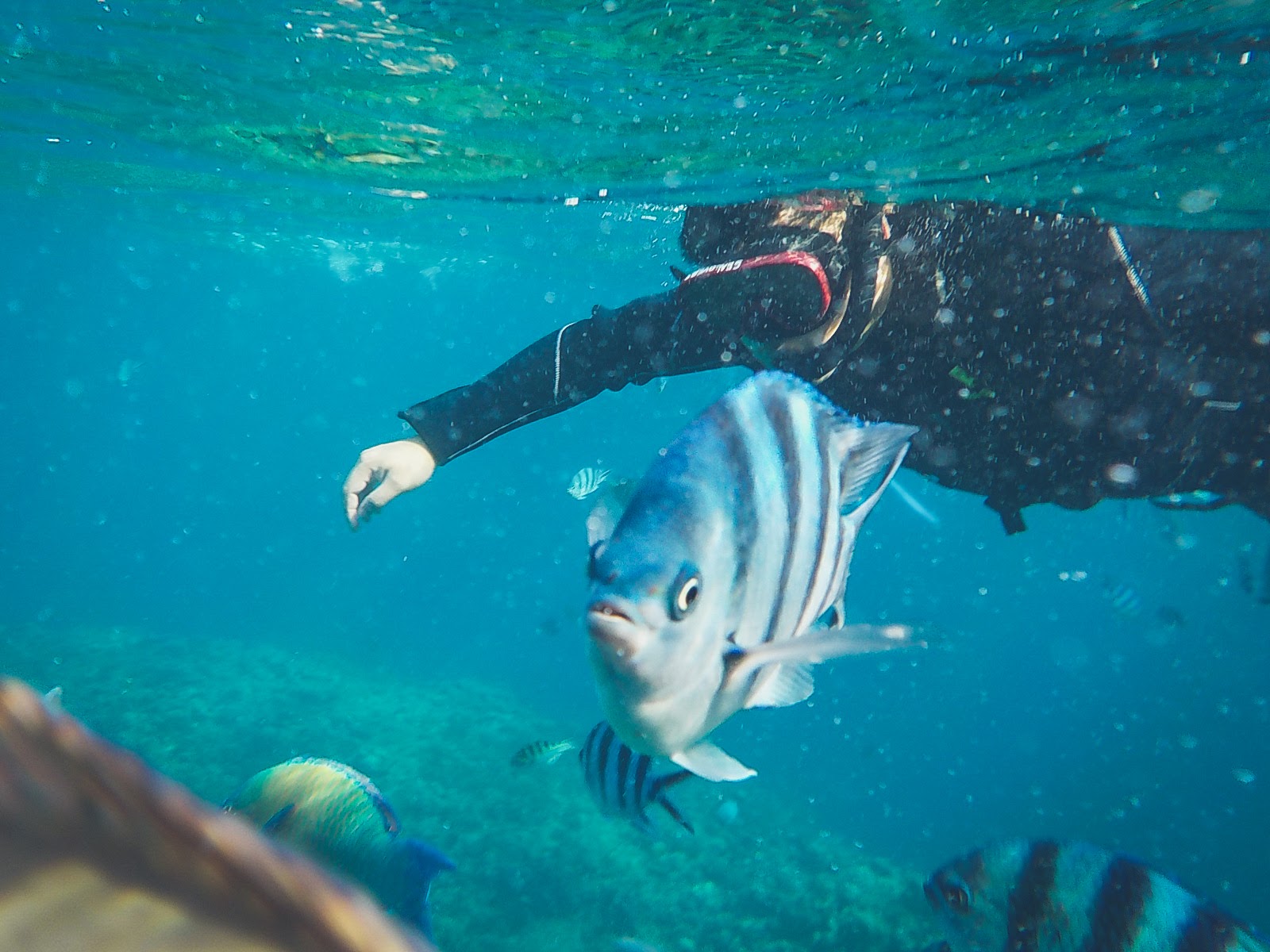 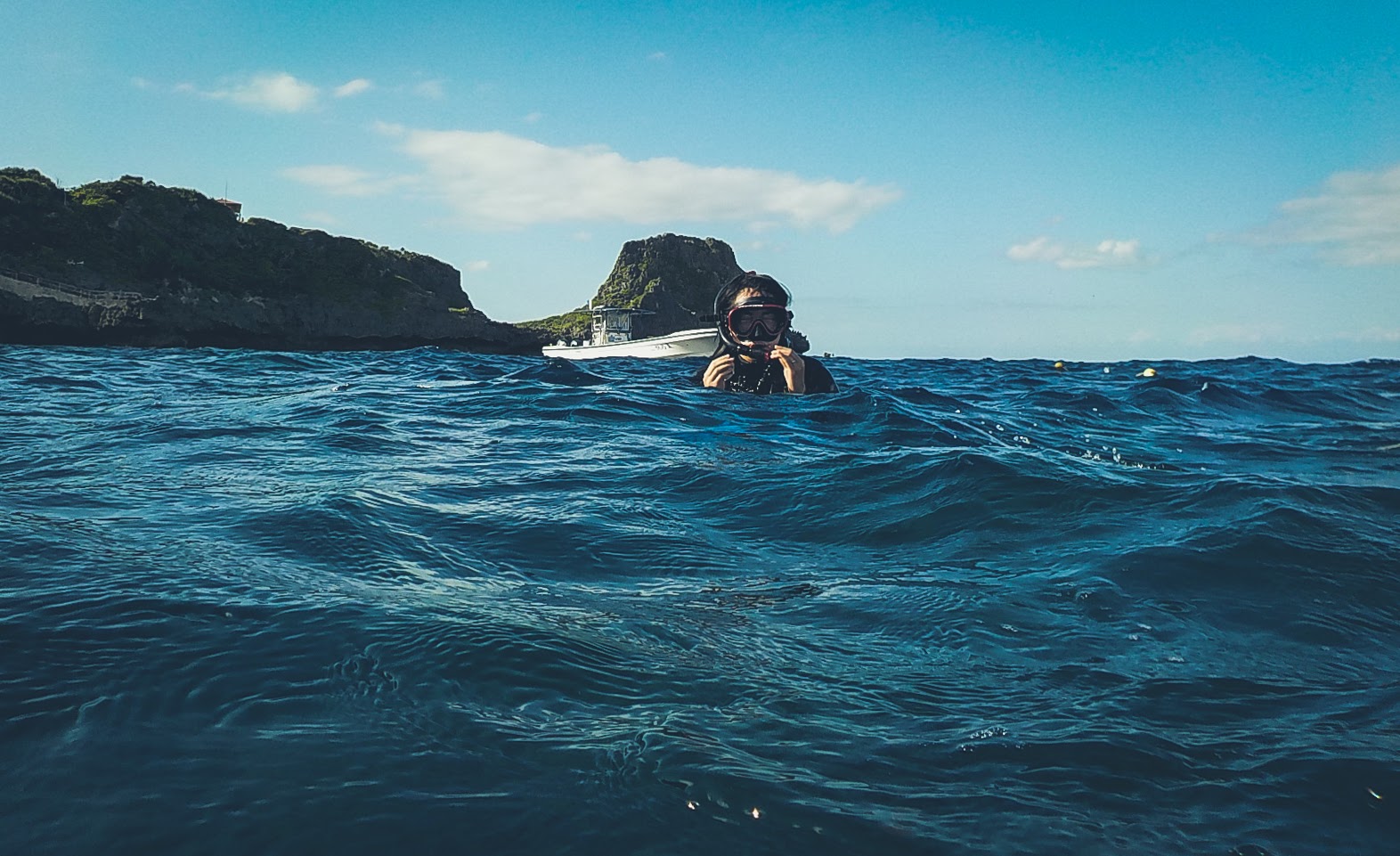 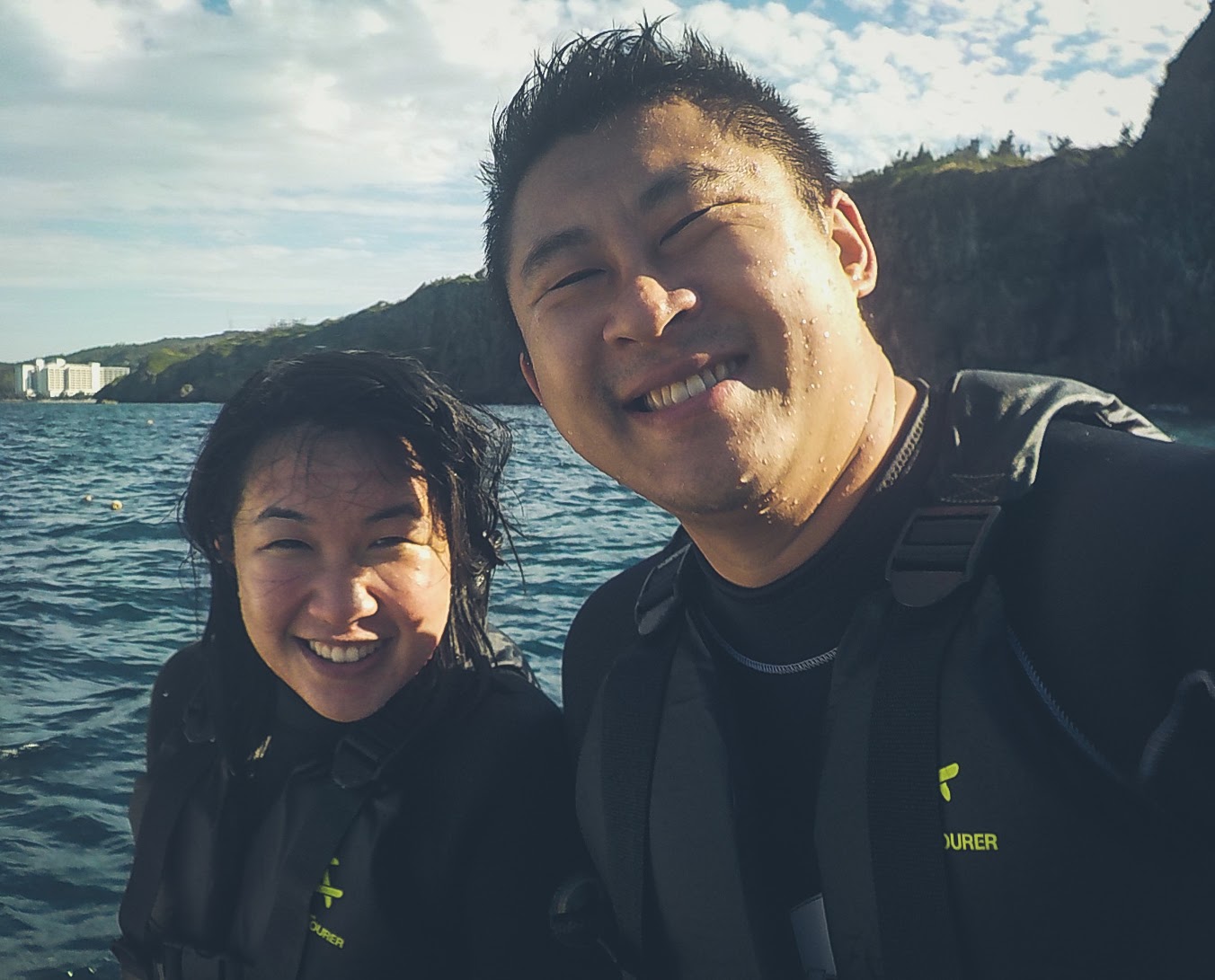 Our last dinner in Okinawa was at the Four Seasons Teppanyaki Restaurant at the Renaissance Okinawa Resort, just a few minutes down the road from our own hotel. Four Seasons has a reputation for being one of the best teppanyaki shops in town, serving up juicy cuts of prime Japanese beef, along with an assortment of other savoury and sweet dishes. So, after showering off the ocean spray and changing into some clean clothes, we drove down the now-familiar National Route 58, turning off on the same exit we took to Cape Maeda and pulling into the curved driveway of the Renaissance. When we arrived, we had the restaurant mostly to ourselves, although by the time we were settling our bill, the dinner crowd had started to fill up the joint. The meal ended up being a little on the expensive side, but the food was tasty, and it was a nice to dress up a little bit and enjoy a night out to cap off our holiday. 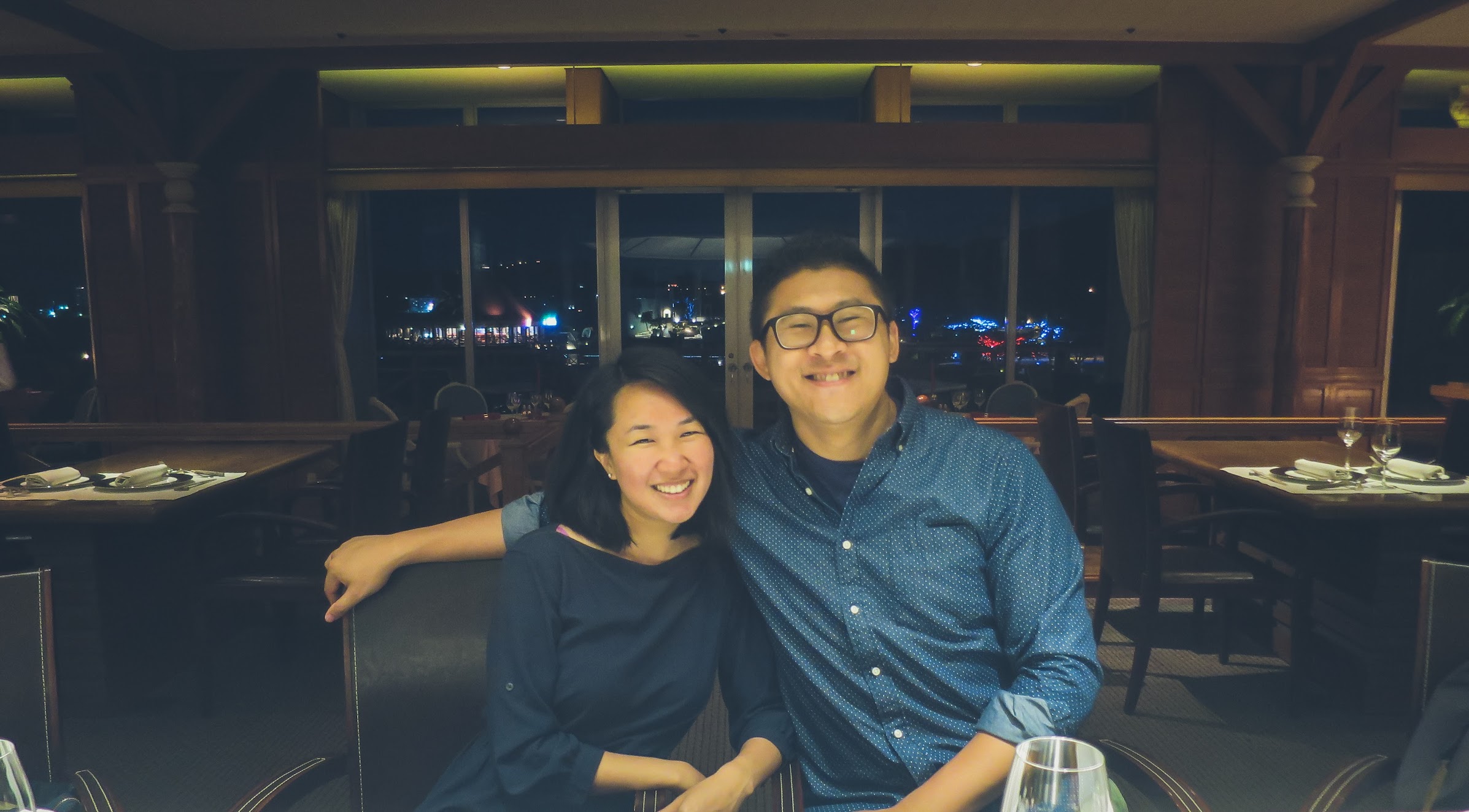 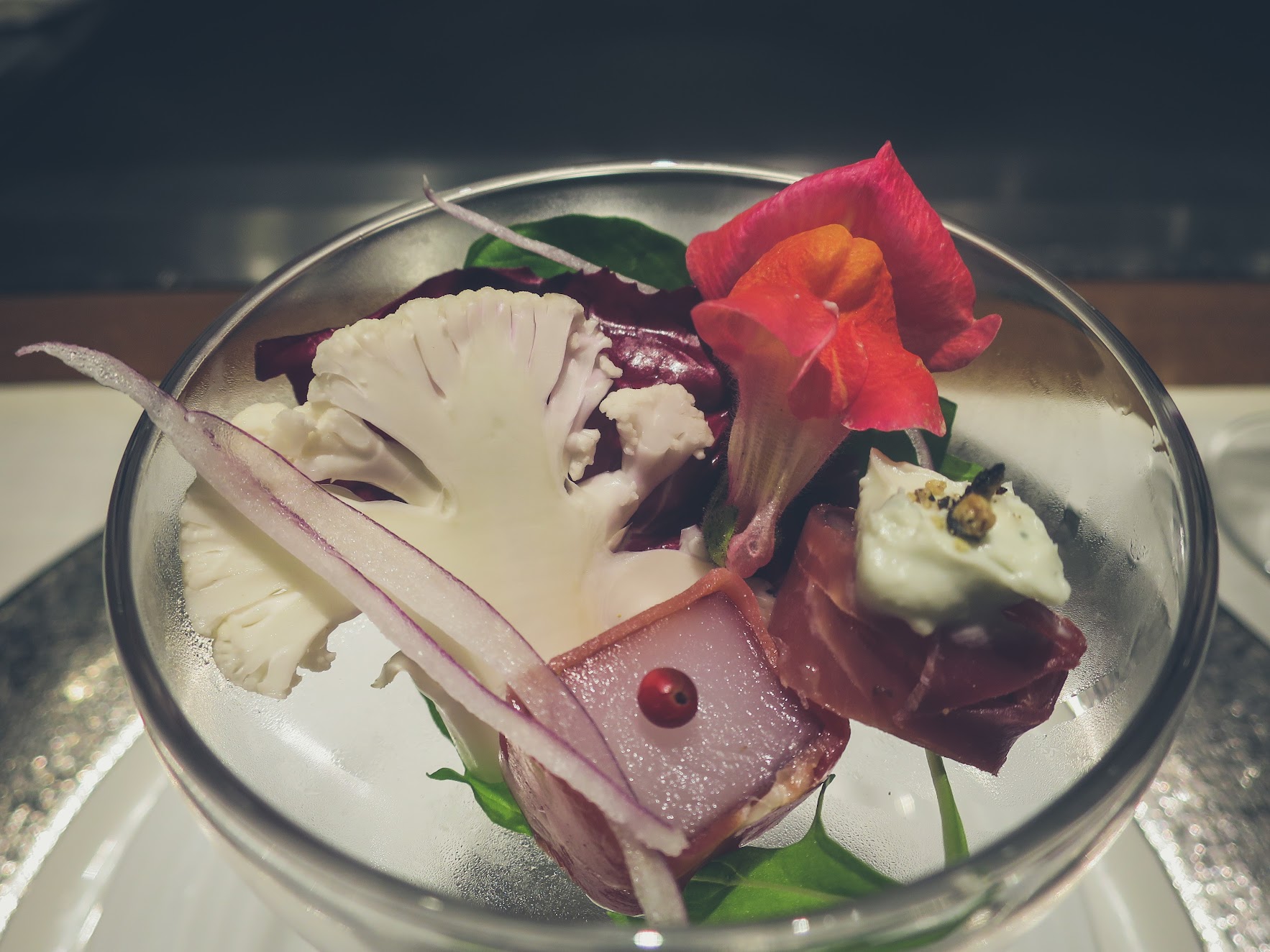 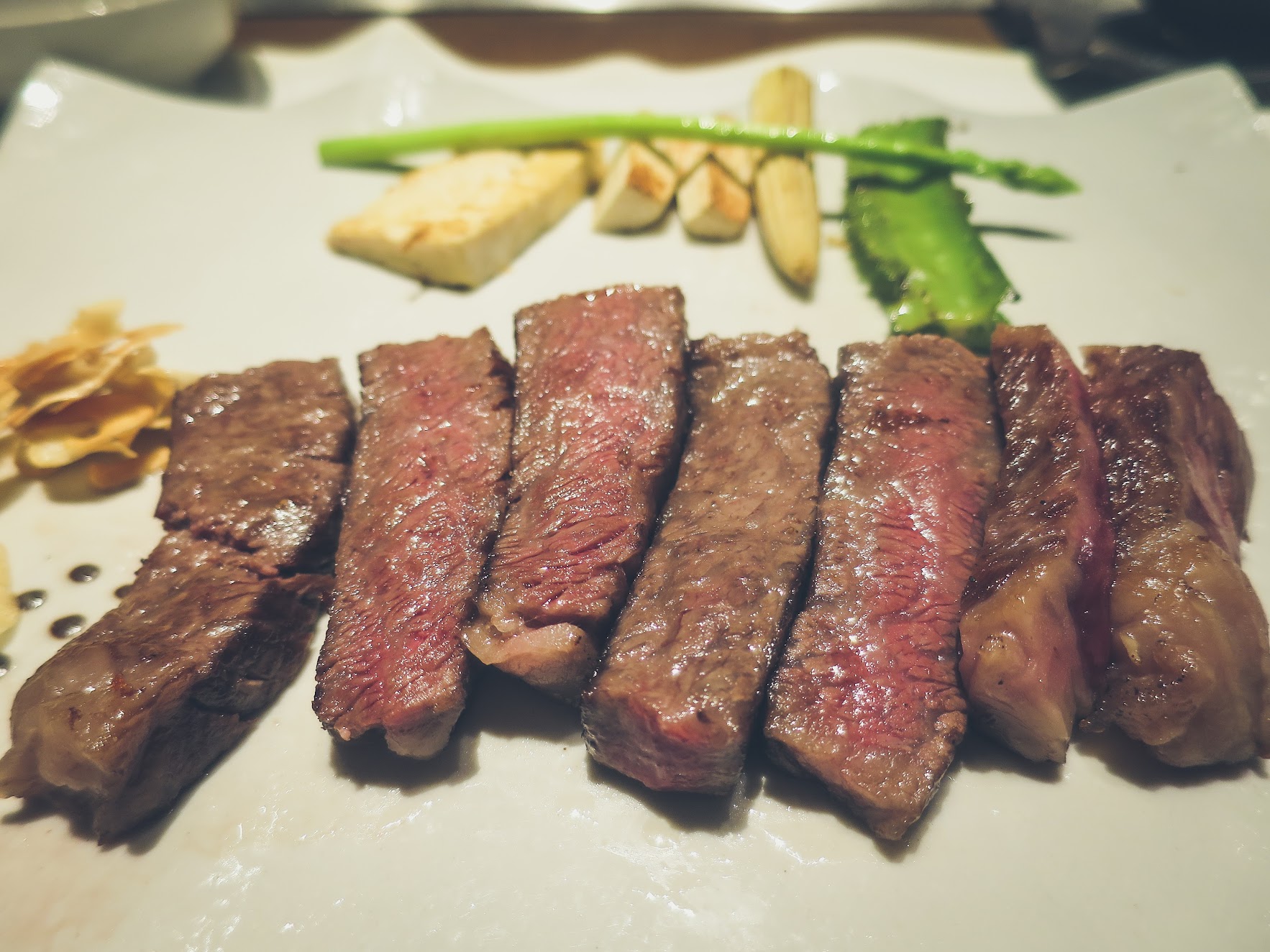 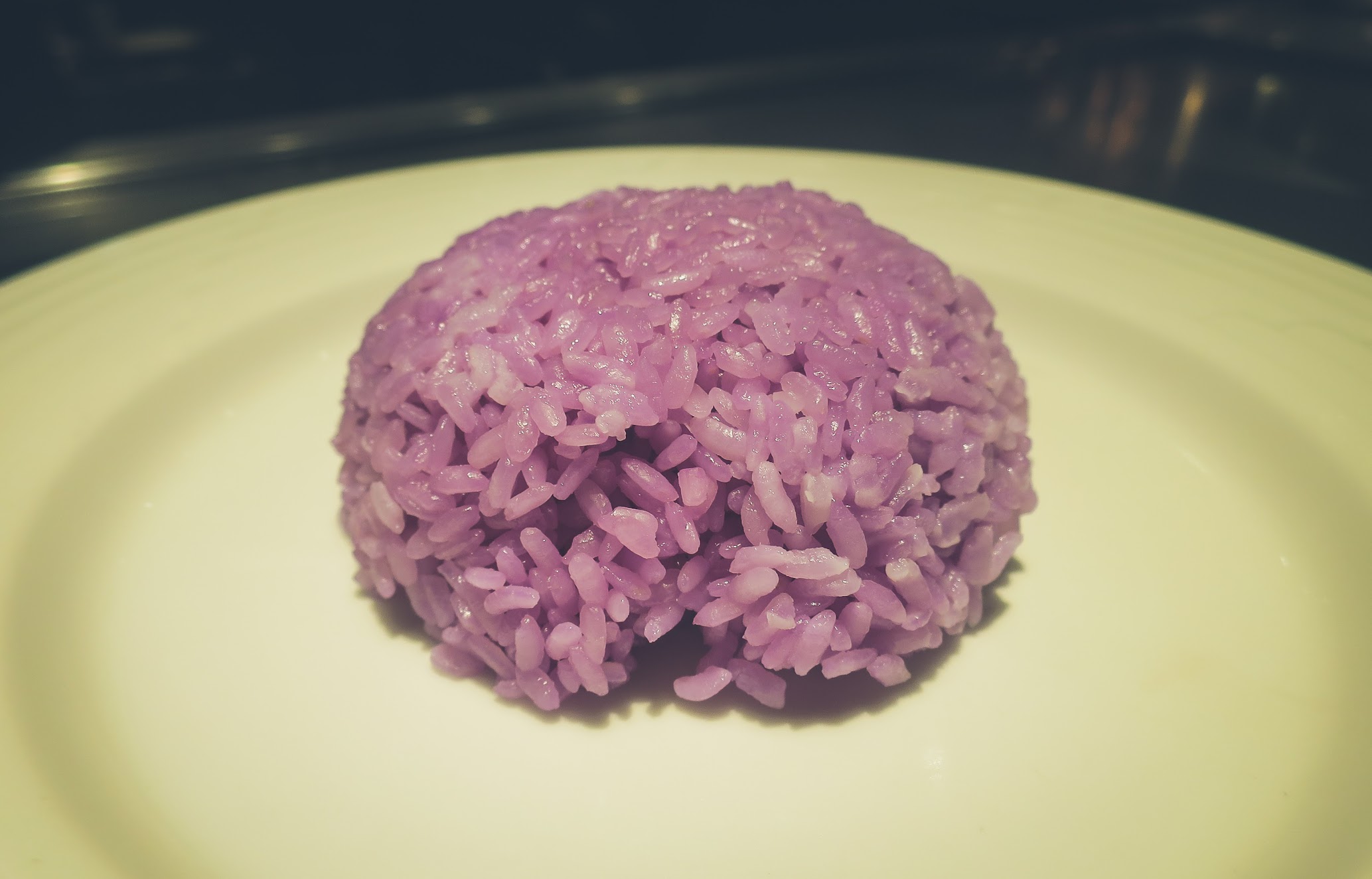 The next day, after checking out of our hotel and driving into Naha, we made a quick stop at the Ashibinaa Okinawa Outlet Mall to do some shopping before our flight. We didn’t go too crazy with the plastic, but I did pick up a nice, thick sweater that would come in handy soon. Okinawa had been a pleasant surprise for us, having expected little more than just another tropical island. Its peculiar blend of beautiful beaches, clear oceans, medieval castles, excellent museums, and sensational food made for a very memorable holiday, one that we still look back on fondly when we get a little stir crazy in our Hong Kong apartment. In fact, just two weeks after we got back from Okinawa, we felt that restlessness again, and we bought tickets for another holiday early the next year. There would be no swaying palm trees or golden beaches this time around, though, and I’d be needing that sweater, and lots more besides. 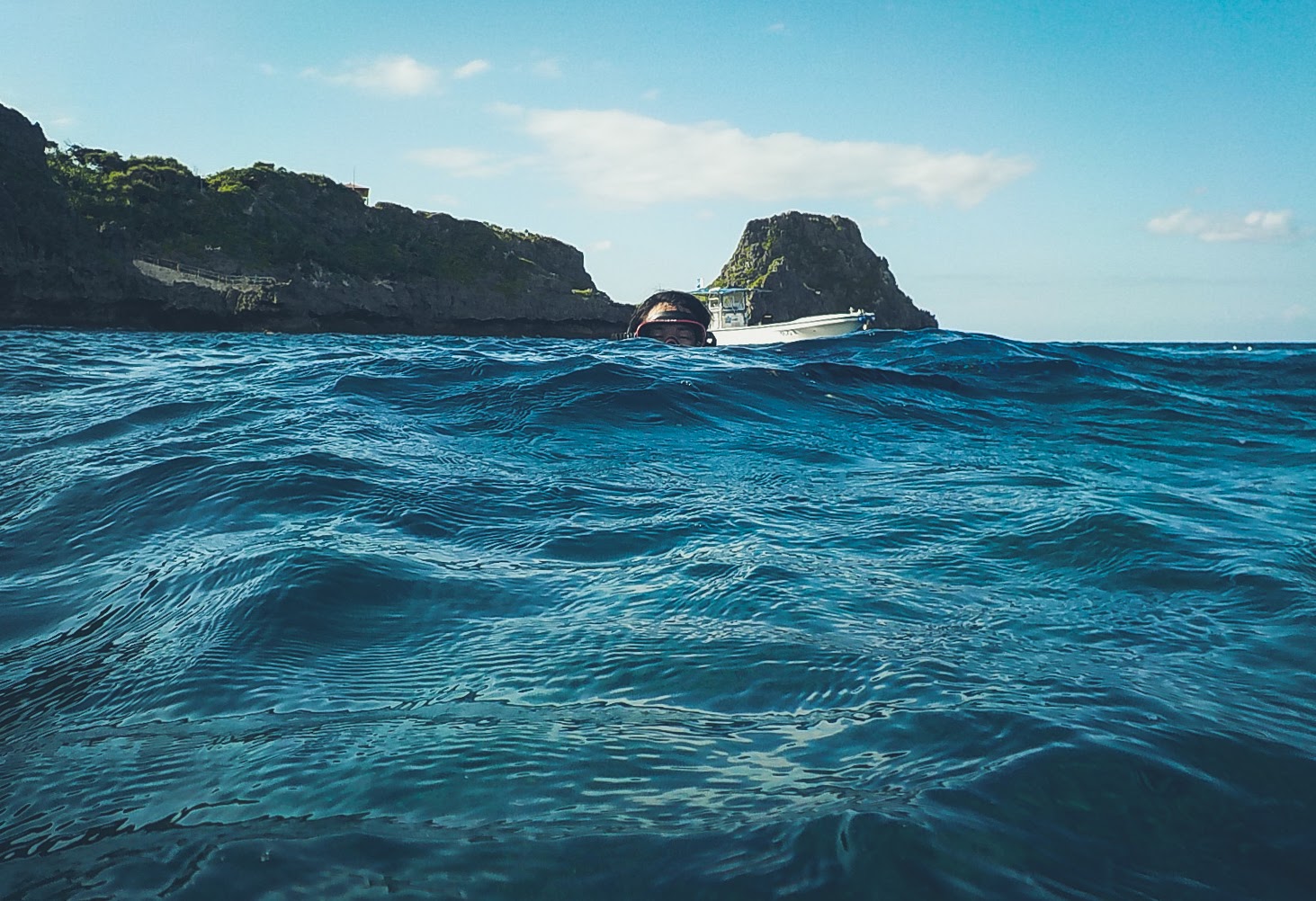