The Snæfellsnes is a narrow peninsula on the west coast of Iceland, about a 2-hour drive north of Reykjavík. Often referred to as Iceland in Miniature, its meandering coast and rugged interior contain all of Iceland’s usual gems – volcanoes, mountains, grasslands, beaches, and lava fields – and the drive, with its dramatic landscapes and lonely fishing towns, is one of the most beautiful in the world. It’s also a little more remote than the Golden Circle and the sites along Iceland’s southern coast, which had a certain appeal as well. Our planned route that day would go north along Route 54, Snæfellsnesvegur, until we hit the Snæfellsnes, cutting through the peninsula to its northern margins on Route 56, Vatnaleið, and then making a counter-clockwise drive around the peninsula and back home.

We checked and double-checked the weather forecast and road conditions before we set out that morning, a little nervous that we might have to change up our plans. The situation looked pretty good up until the town of Borgarnes, about halfway between Reykjavík and the Snæfellsnes, but some of the roads on the peninsula itself were still closed from a storm the previous night. After a little more debate, we decided to chance it, hoping that they would be cleared by the time we arrived a few hours later. It was still quite early when we headed out, the sun just beginning to rise from behind the thick layer of clouds stacked up high on the horizon. The weather was fairly unremarkable as we were making our way out of the city, not much different from a typical Toronto winter’s day, but nearly 30 minutes after we started, the situation changed drastically – white-out blizzard conditions swept across the barren hills in an instant, the terrible winds buffeting and rattling our lonely vehicle, welcoming us to the edge of the world.

The terror persisted for another half-an-hour, before we entered a tunnel and emerged into a ghostly landscape on the other side. Beneath the grey cloud cover, the first colours of the morning revealed snow-covered mountains rising abruptly from scraggly plains, as herds of scruffy Icelandic horses gathered in clumps and shadows. It was not long before the clouds began to drift and scatter, and the entire land was lit in a soft, pink glow. Ours was the only car trundling through the hushed landscape, and the view was ours and ours alone. By mid-morning, we were pulling into the parking lot of Geirabakari Kaffihus in Borgarnes, the stand-in for Papa John’s in The Secret Life of Walter Mitty, where we grabbed a quick breakfast of snúðar and bottomless mushroom soup. 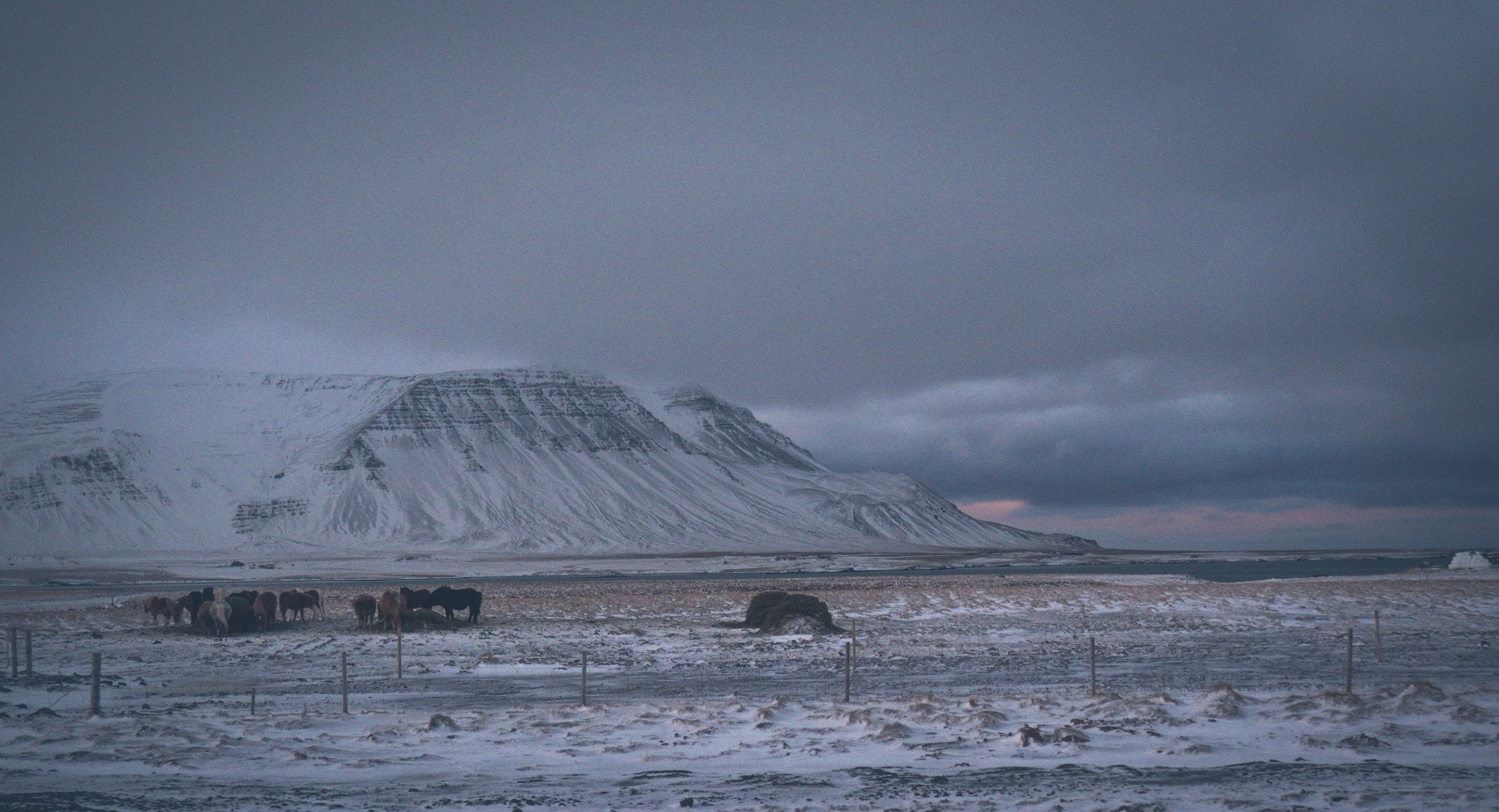 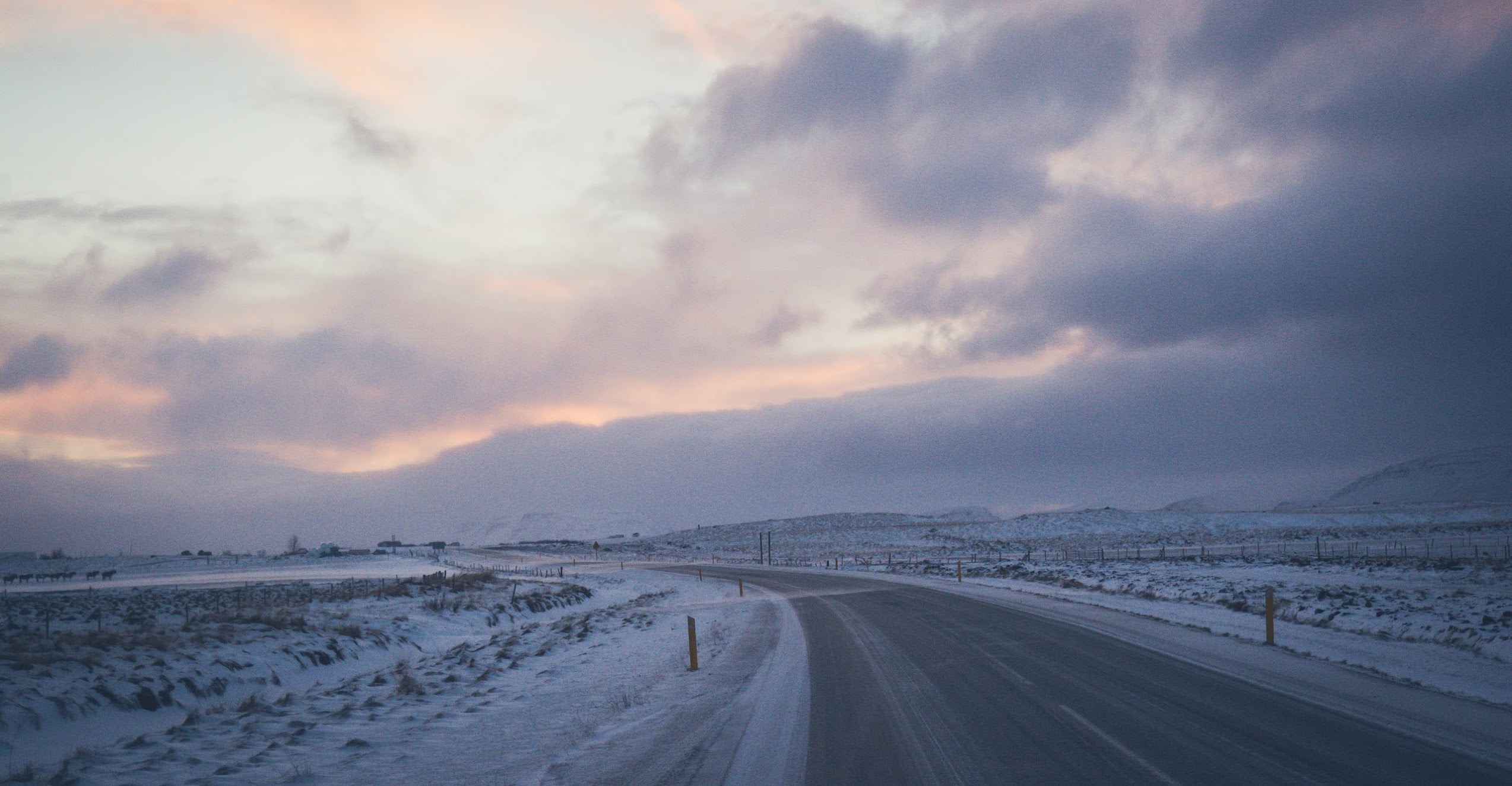 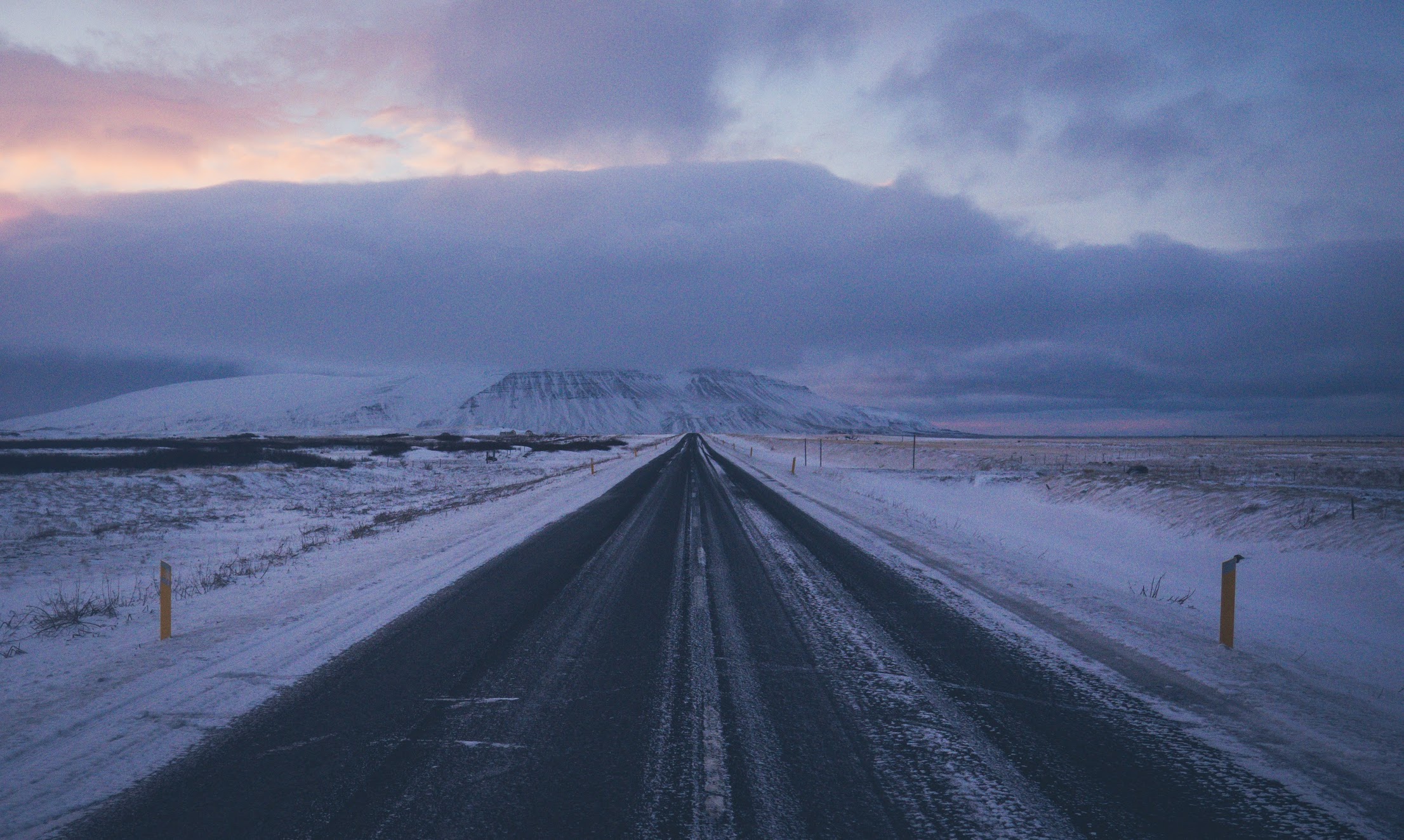 Once we left Borgarnes and continued our journey north, the wind picked up again, and it came back with a vengeance. We could feel the violent gusts rushing headlong into the side of our SUV, intruding upon our illusion of warmth and comfort inside. Even as it made us feel entirely small and unwelcome, though, the land and its shifting lights and shadows tempted us to go further in. The illumination of the half-hidden northern sun on distant mountains and seas was unlike anything we’d ever seen before. It seemed so impossibly soft and pure, like some idealized landscape in a painting, lulling us into a false sense of complacency. The moment we stepped outside, however, the air was immediately ripped from out of our lungs, the deafening sound of the Arctic gales flooding our ears. 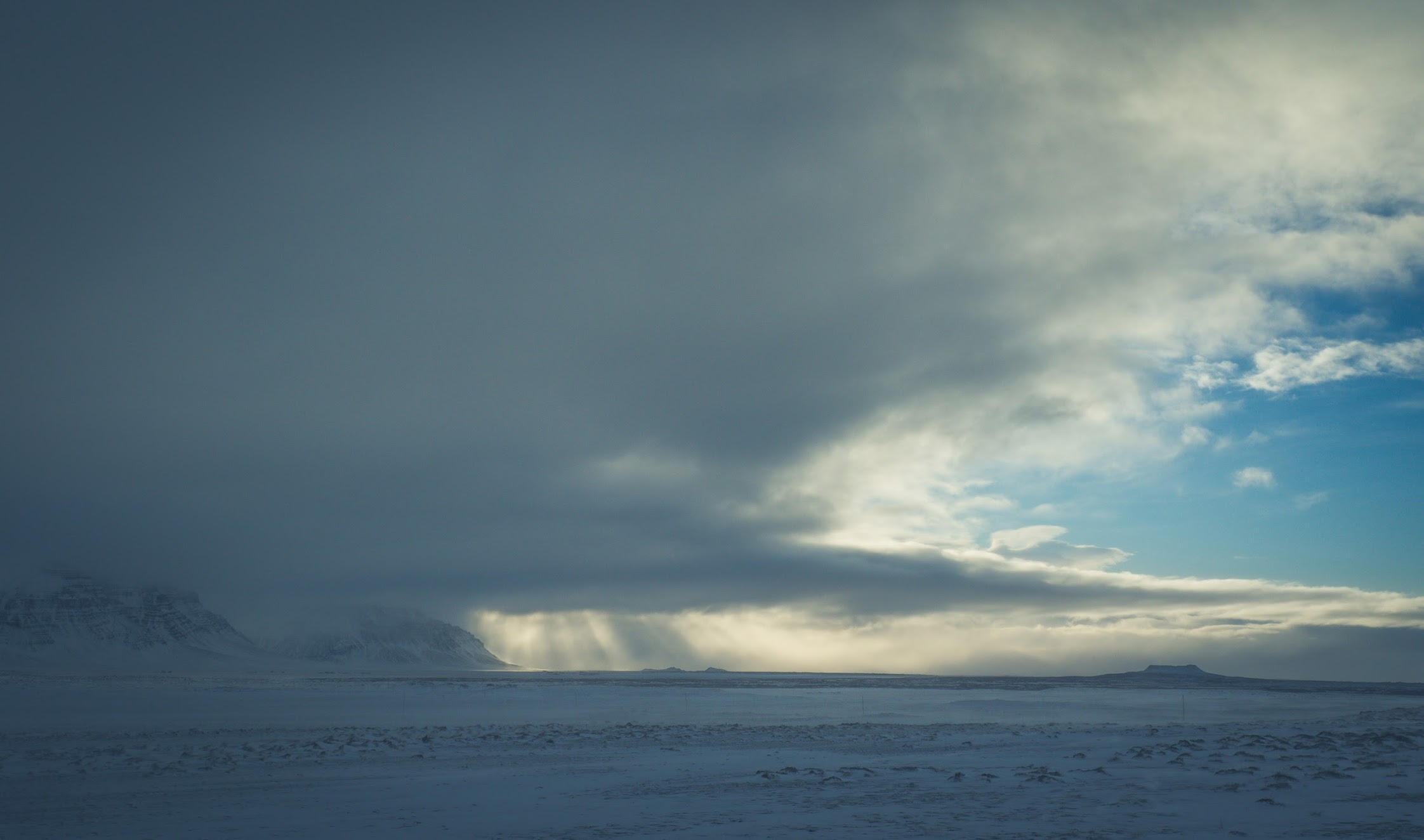 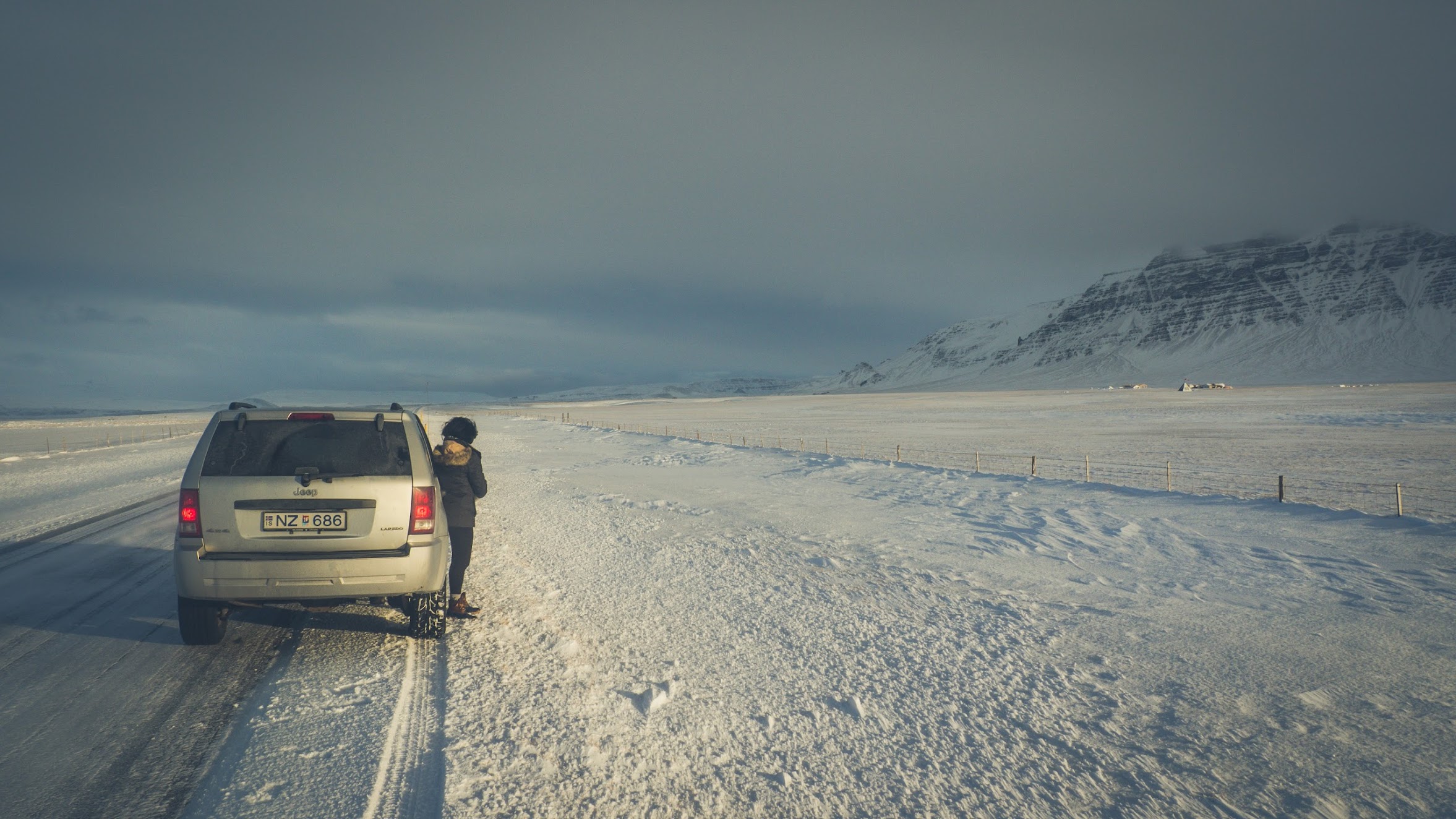 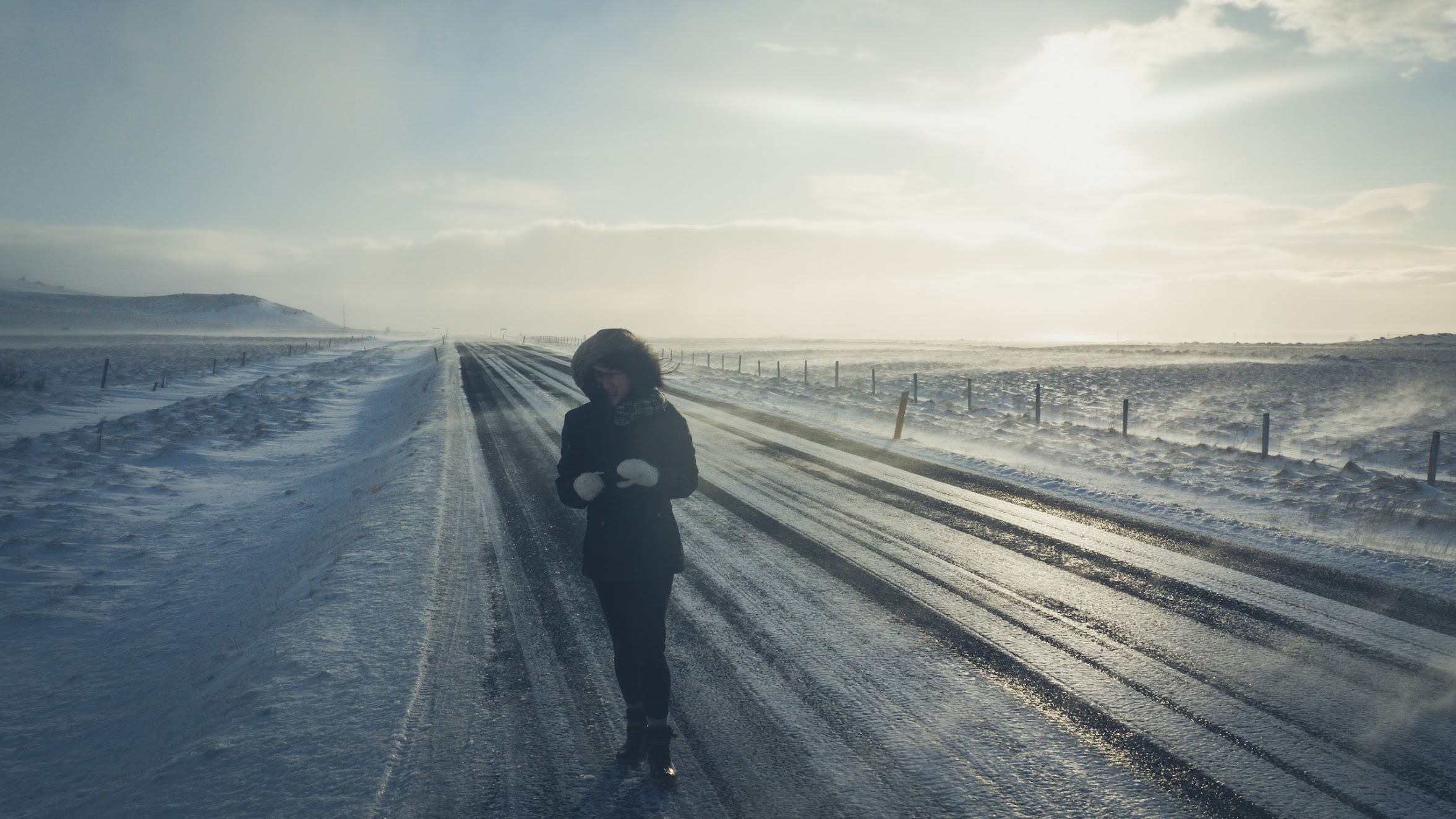 Through the High Passes

By the time we reached the Snæfellsnes, Vatnaleið, the road that cuts through the peninsula in a north-south direction, had finally been cleared, though that didn’t necessarily mean it’d be easy driving. We climbed slowly through the high passes, looking out over lakes and mountains that seemed too small underneath the impenetrable clouds overhead. Again, the lighting was incredible, the shadows playing tricks on our powers of perspective. After 30 minutes of careful driving, we descended into the coastal lowlands again and found ourselves back at Snæfellsnesvegur, the road that links the Snæfellsnes with Reykjavík and makes a circuit around the entire peninsula. At the juncture, we turned east, making a small detour to the town of Stykkishólmur, the northernmost point on the Snæfellsnes. 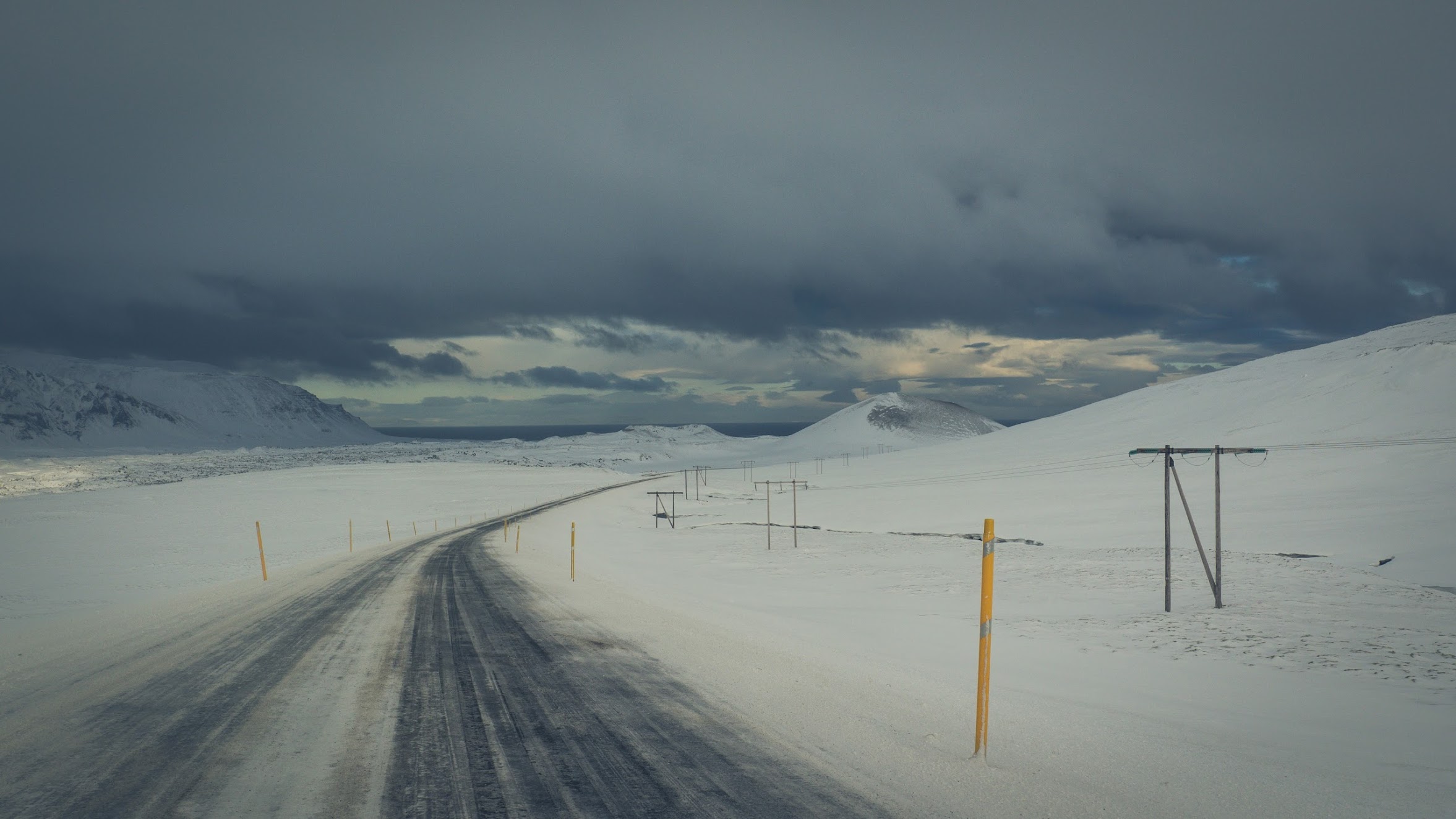 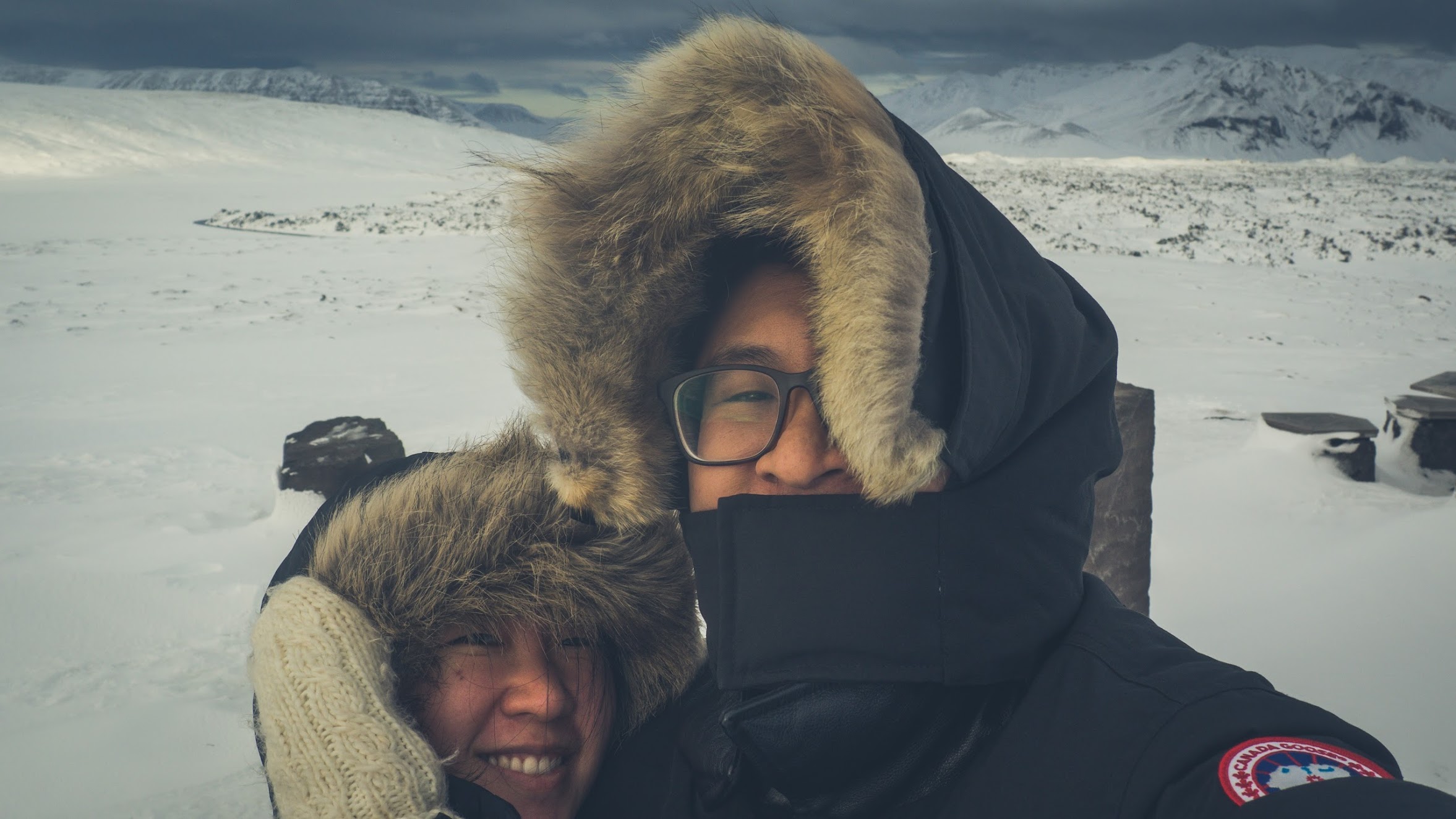 We drove through the empty streets of the old fishing village, with no sign of the living or the dead, aside from the new cars parked in the shadows of deep snow drifts. Without a clear idea of where we were going, we continued to drive north through Stykkishólmur, towards the docks and the ocean beyond. The town harbour semi-encircles a small inlet, curling around and ending in a rocky promontory called Súgandisey. It was here that we saw the first people we’d come across in a long while, and, after parking our vehicle by the seawalls, we followed them up the icy steps to the top of the hill. It was incredibly windy at the summit, but the views of Breiðafjörður Bay and the surrounding islands, as well as back into town, were spectacular. There was an ever-present glow on the horizon, like the hills were hinting at some divine land beyond the margins of the world, and we were starting to believe that Iceland could very well be the gateway to paradise. A tour bus pulled up below us at the base of Súgandisey not too long after we arrived, and the excited crowd made a beeline for the steps. We took that as our cue to head back before the traffic hit the slope, and we half-slid, half-fell down the hill and back to our vehicle. It was lunchtime when we left the harbour and entered the town again, and we made a quick stop at a small restaurant called Narfeyrarstofa. They’re known for their blue mussels and colossal burgers, but after the wind and cold of the morning’s activities, we both opted for hearty bowls of Gúllassúpa, their amazing lamb goulash. 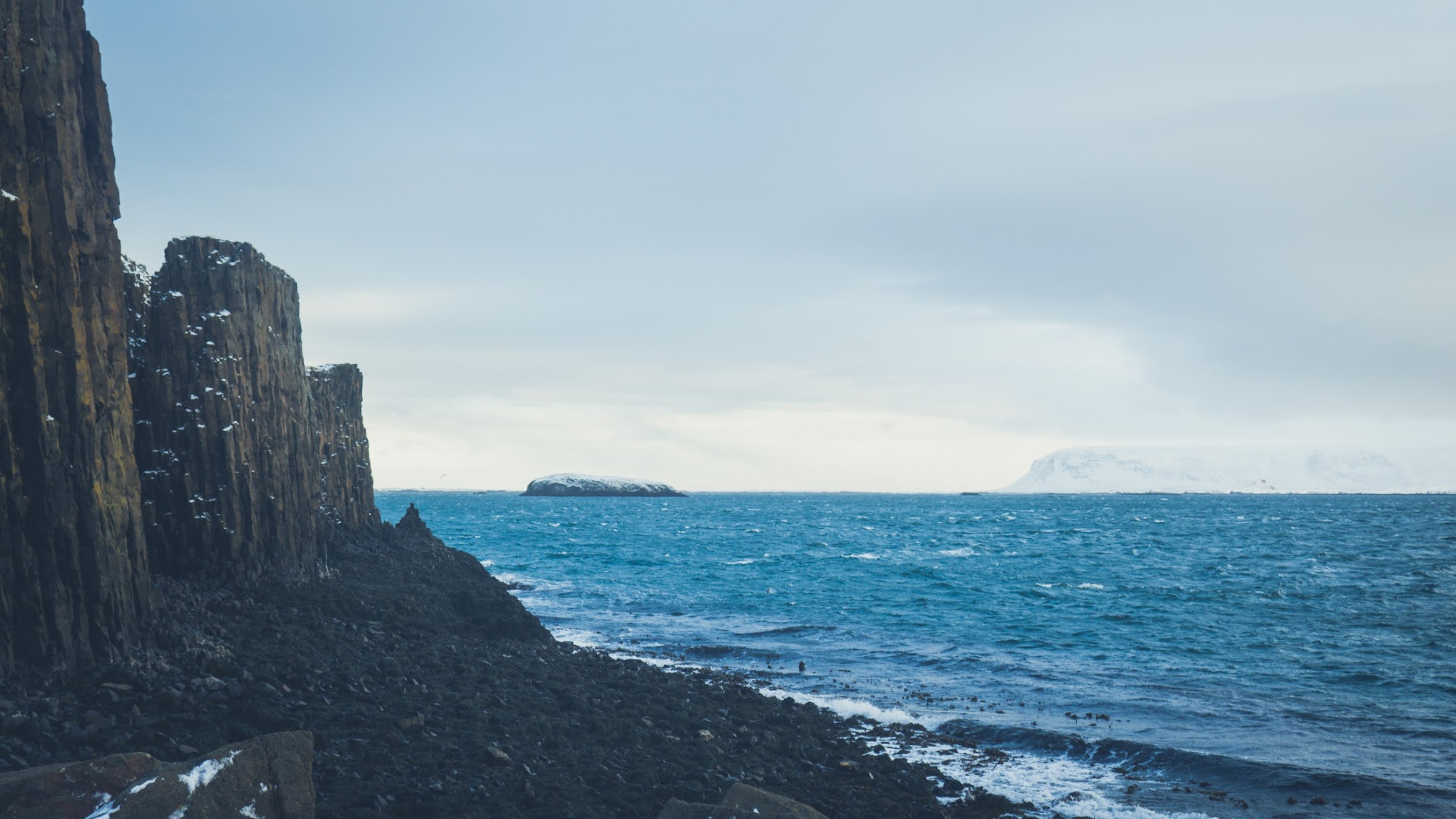 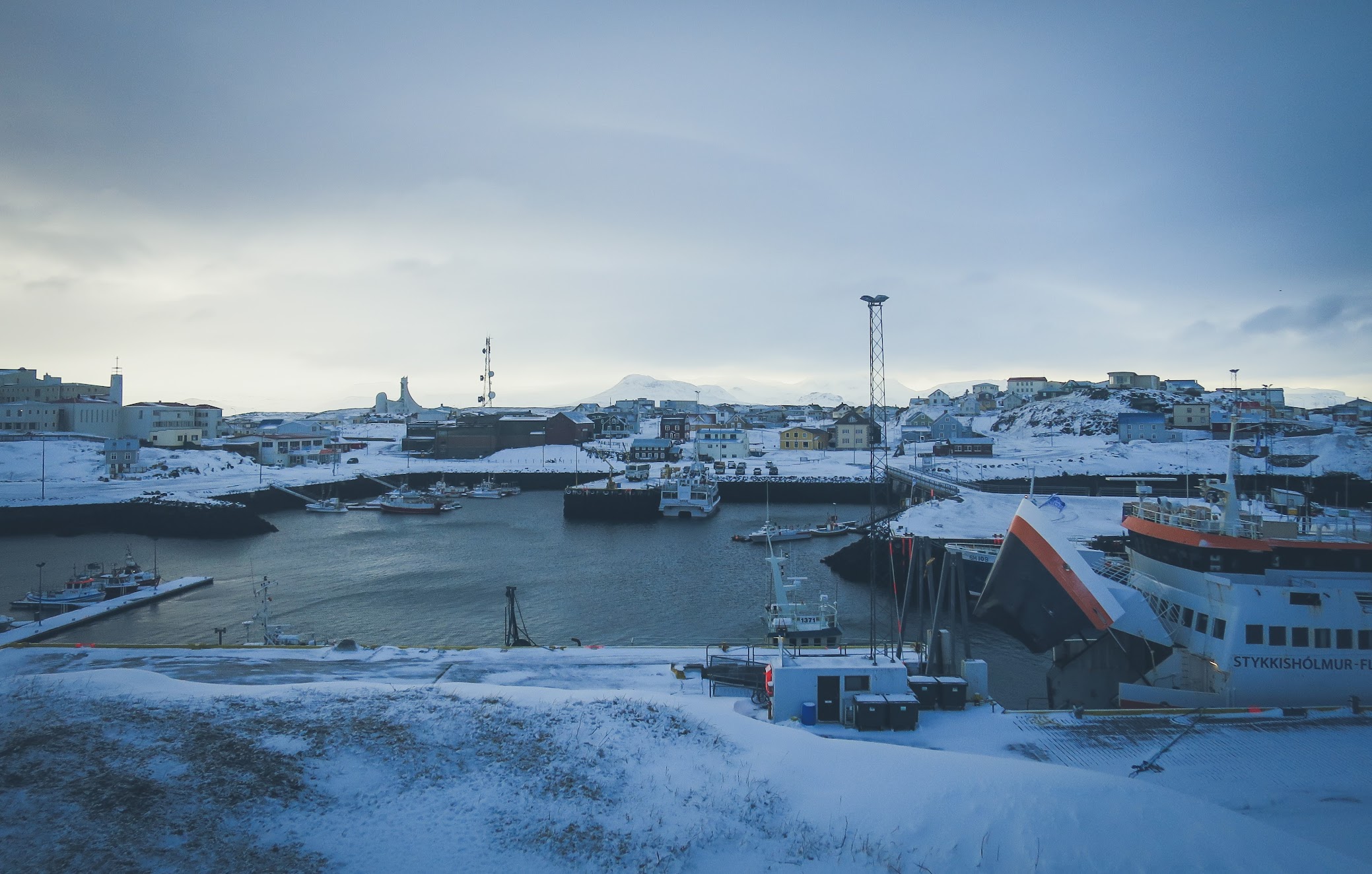 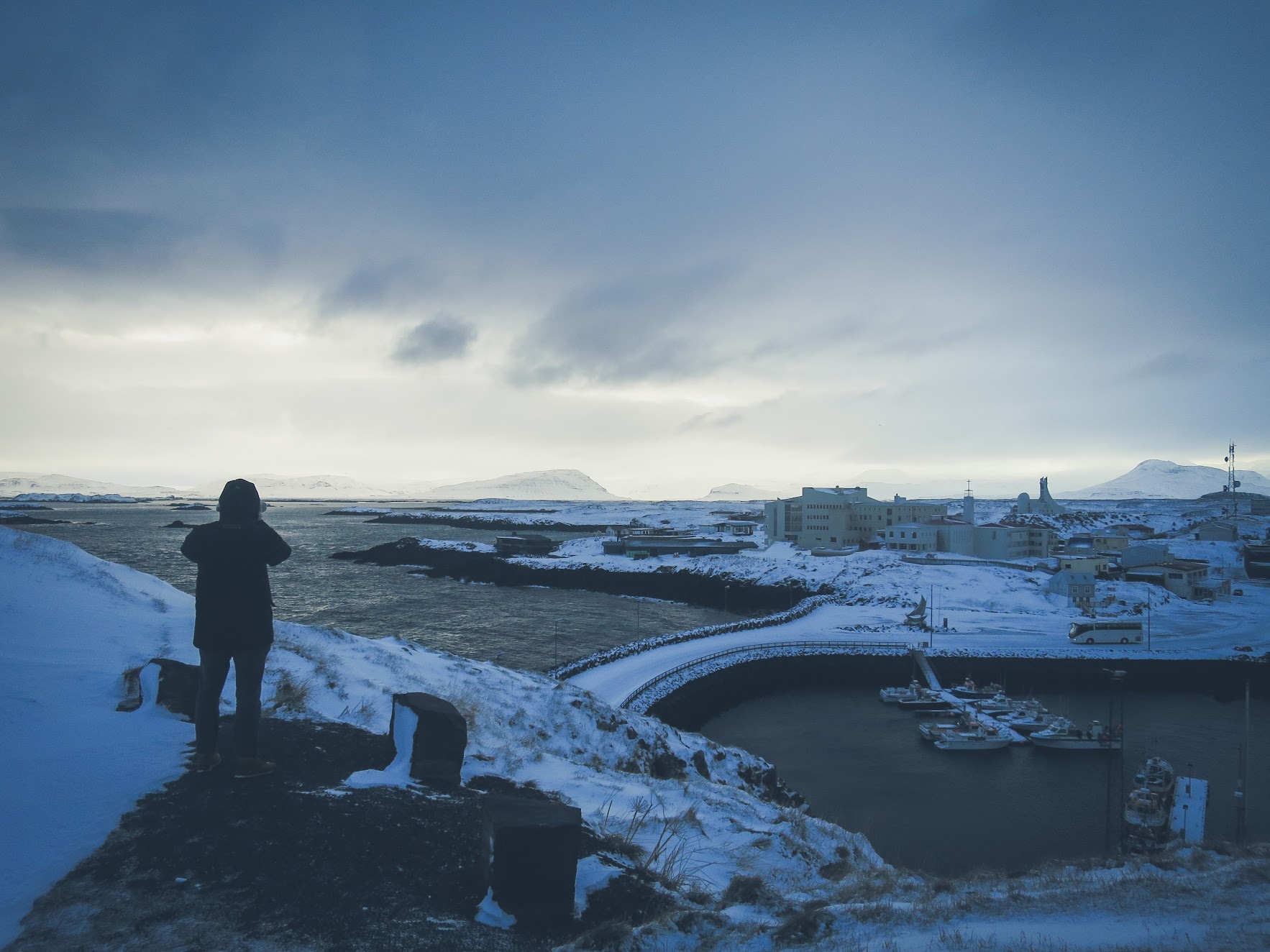 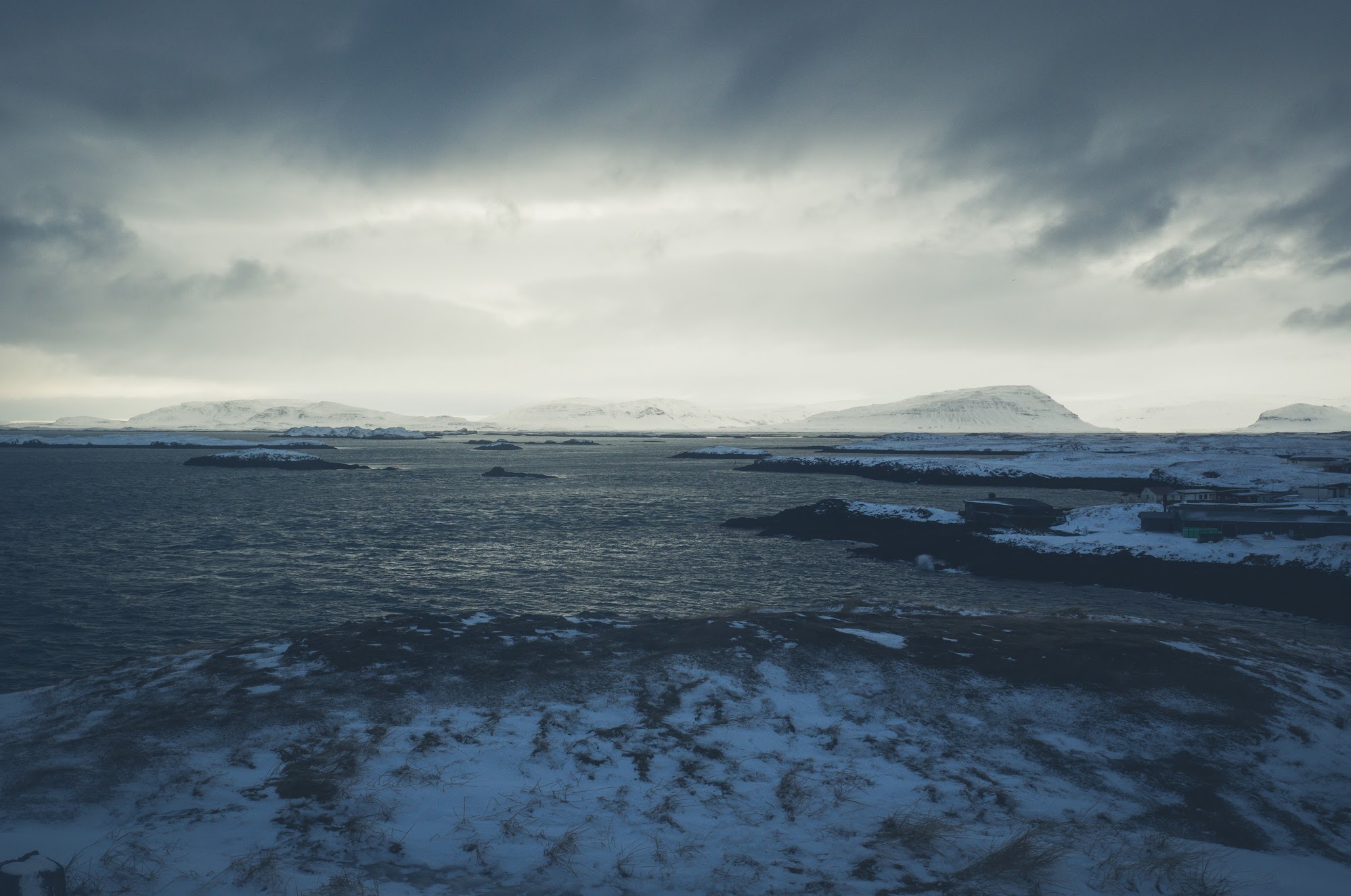 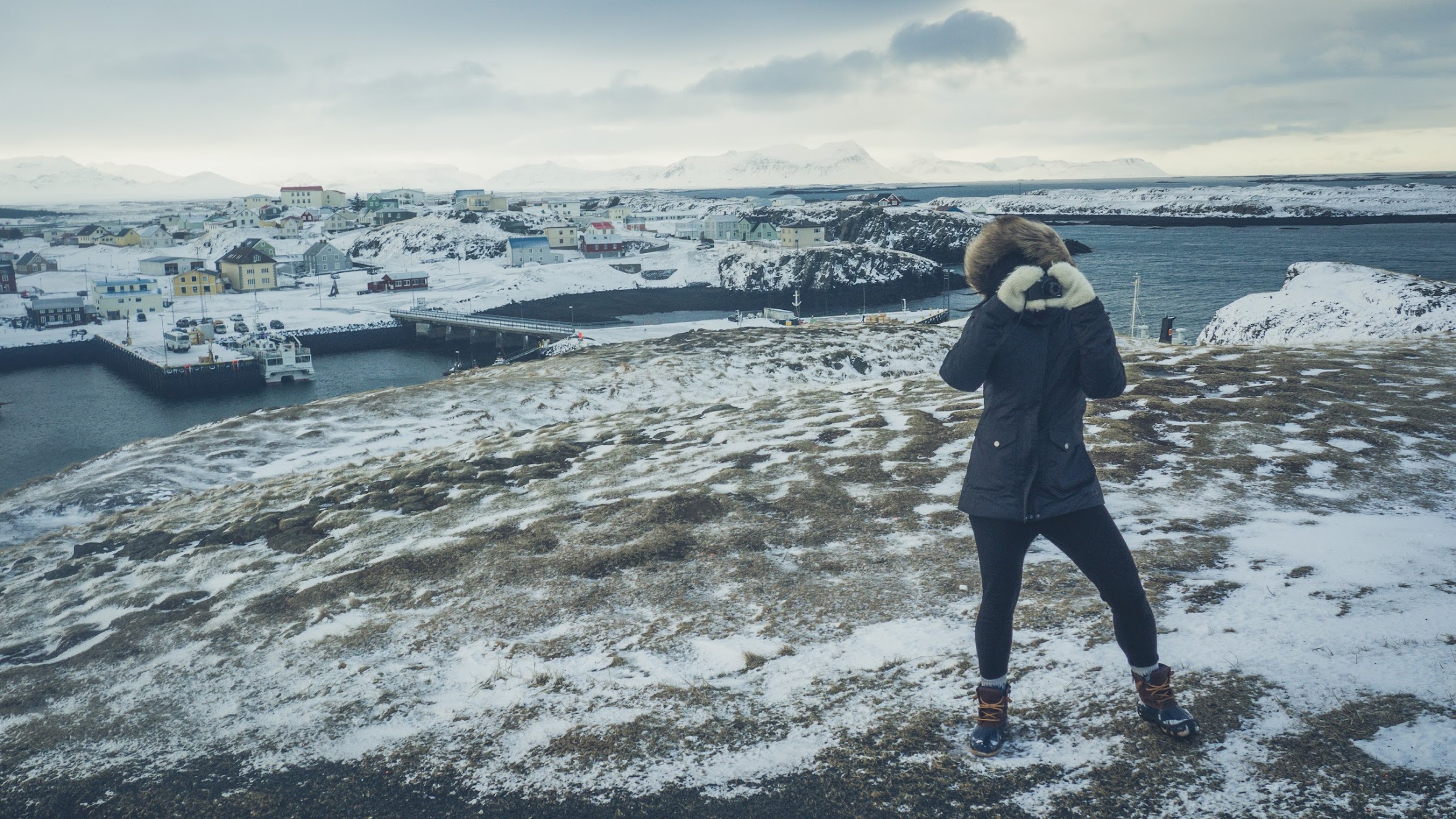 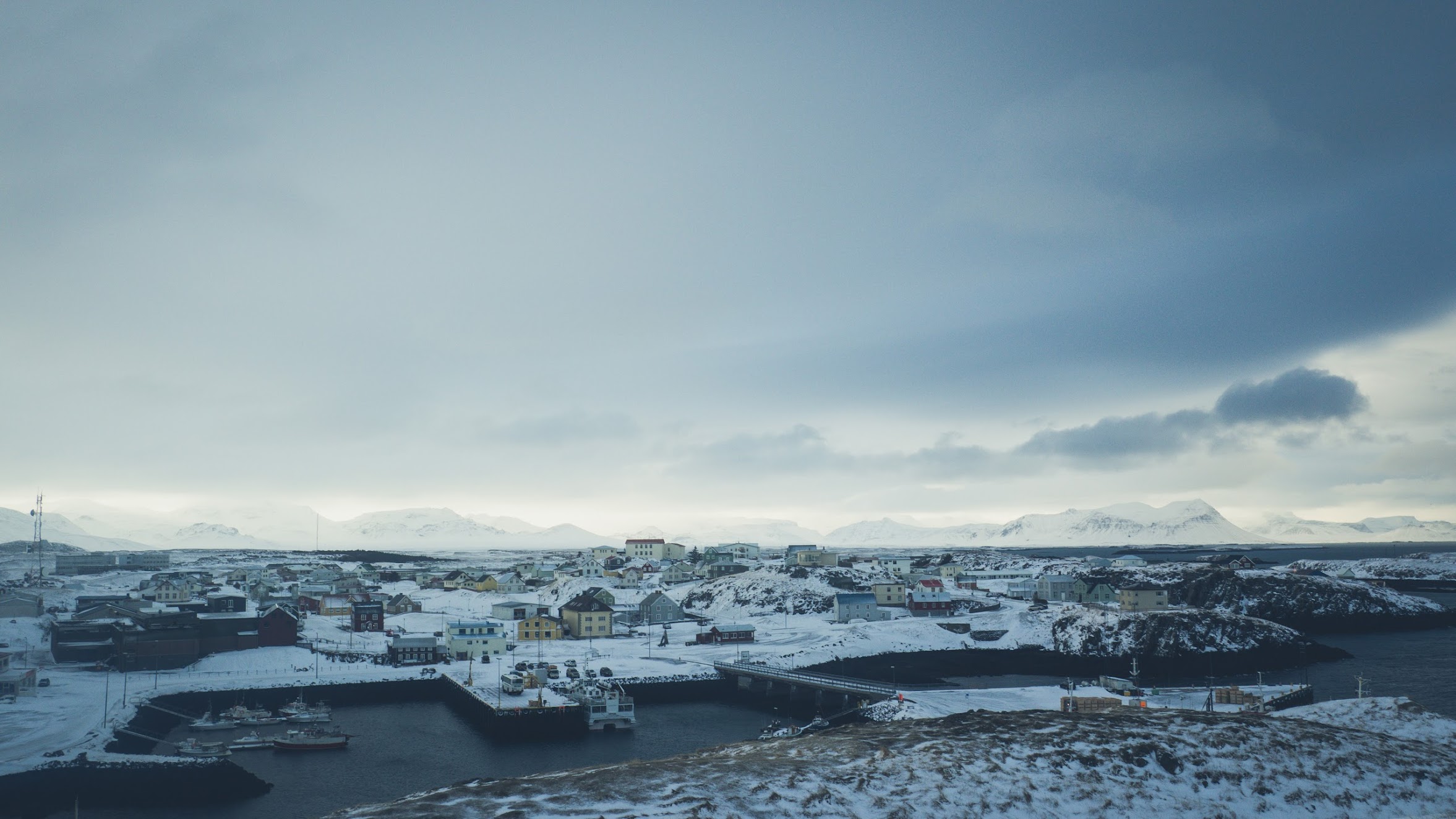 From Stykkishólmur, we traveled south back to Snæfellsnesvegur, and then west, across the barren northern shores of the peninsula. Along the way, we passed by the beautiful Berserkjahraun, a vast lava field covering the lowlands between the mountains and the sea. Our lonely, windswept road cut through the bleak landscape, like a violent brushstroke on a white canvas, and we could see for miles in front of and behind us. For much of the drive along this stretch, we were the only car on the road, and there were times when the loneliness was almost oppressive. It really felt like we were out here on our own, driving along in our precious bubble of warmth and life, stuck out on one of the far northern outposts of humanity. I don’t know if I’ve ever felt so small and vulnerable as I did that day. 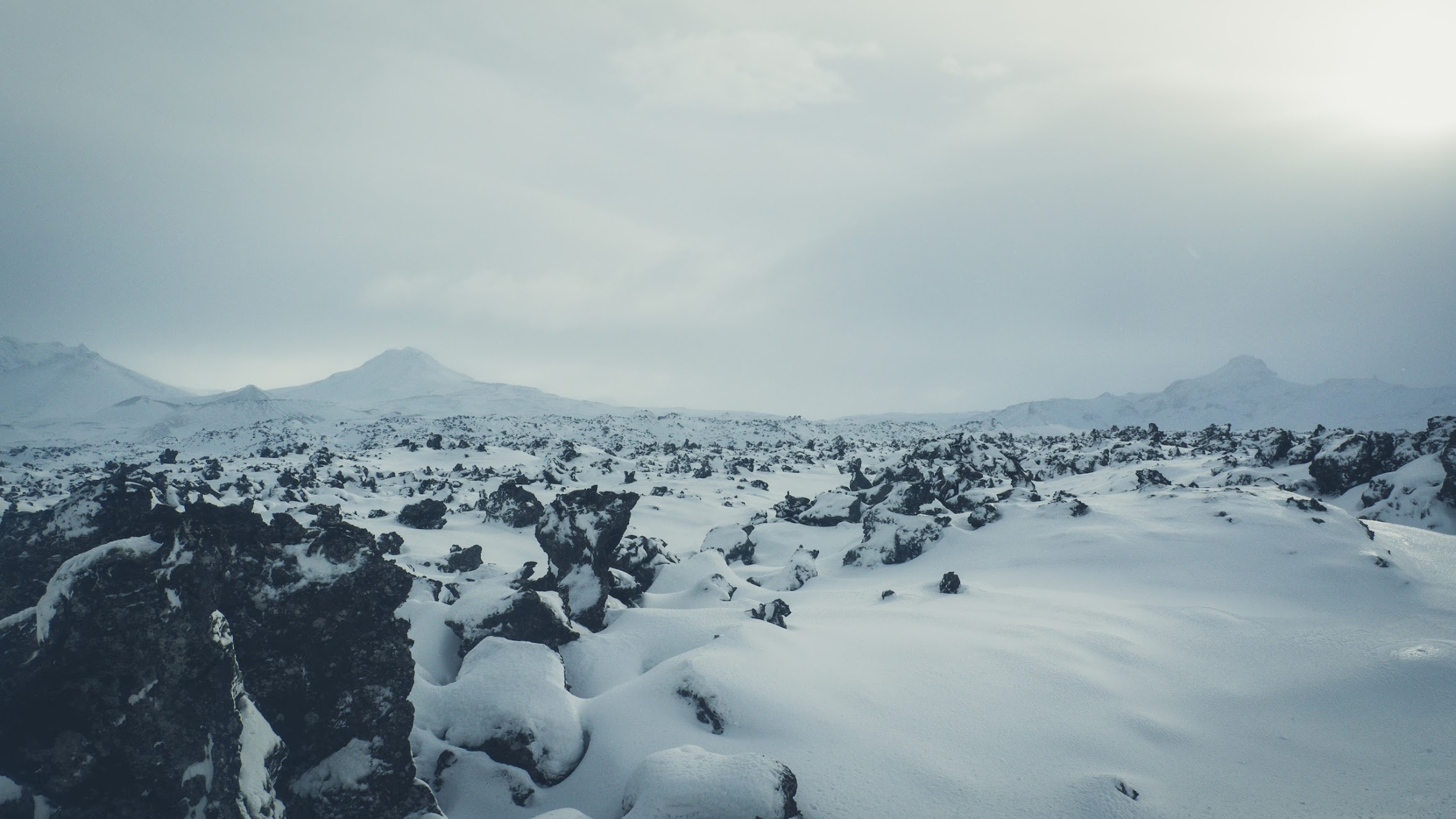 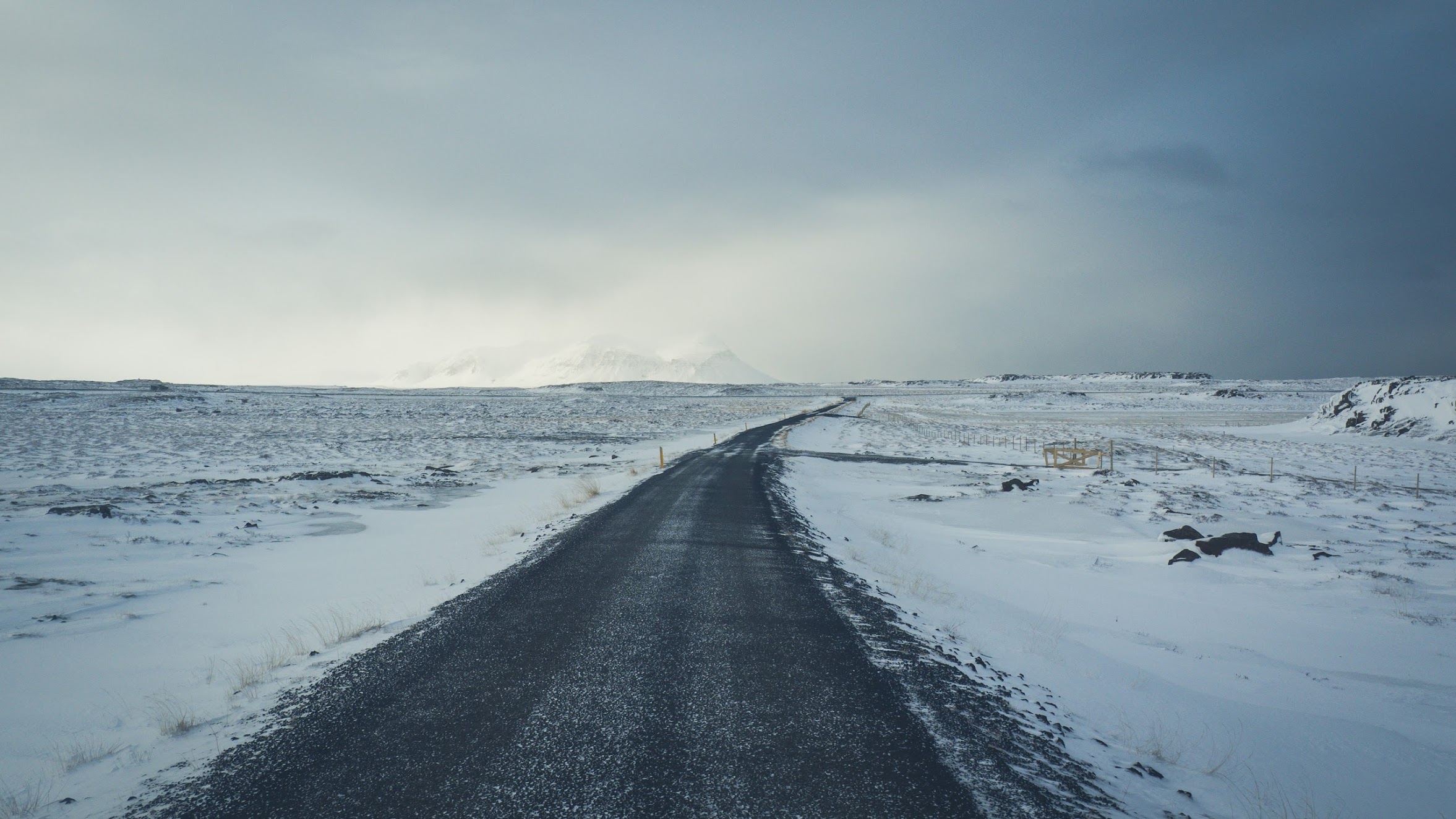 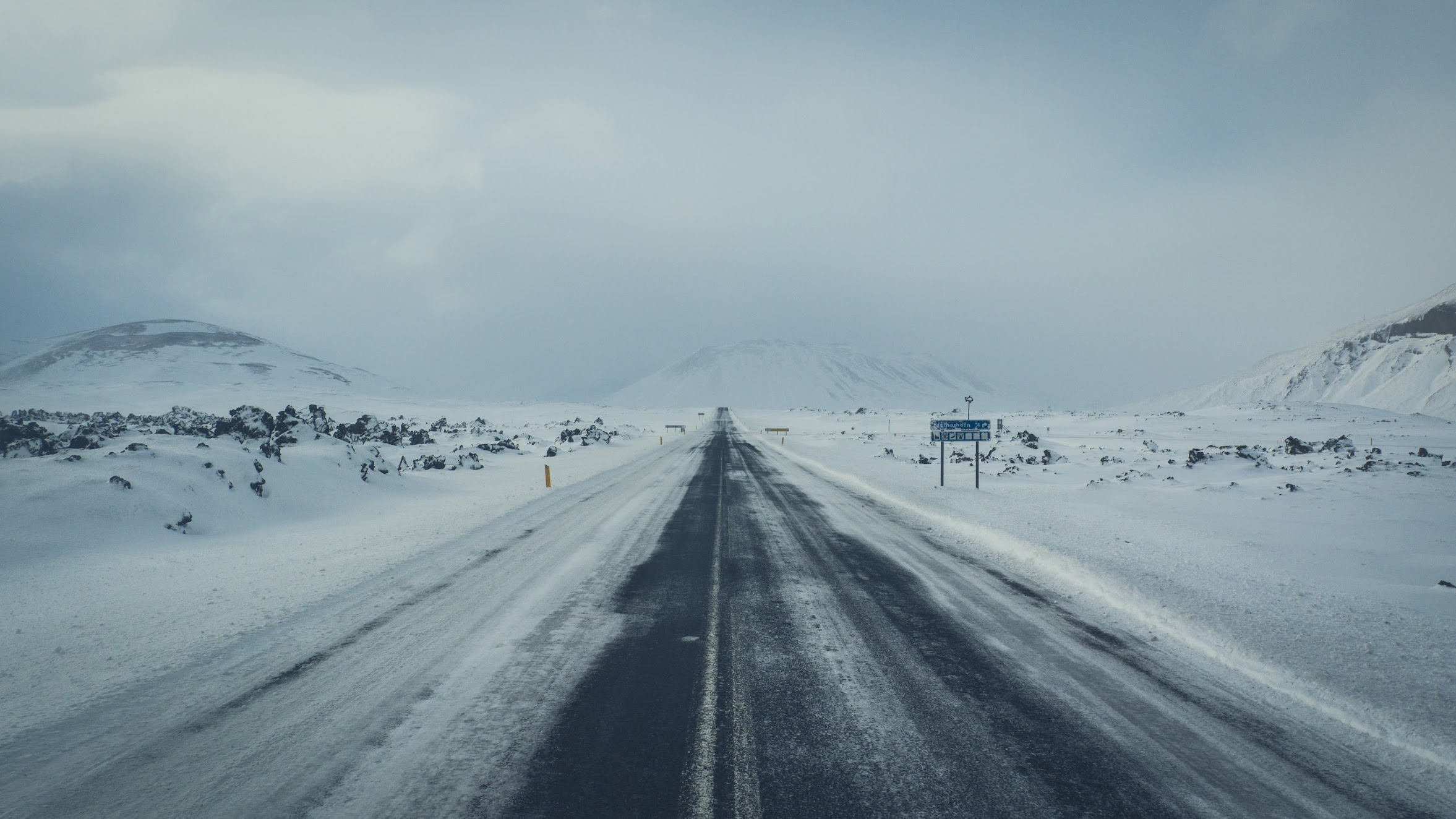 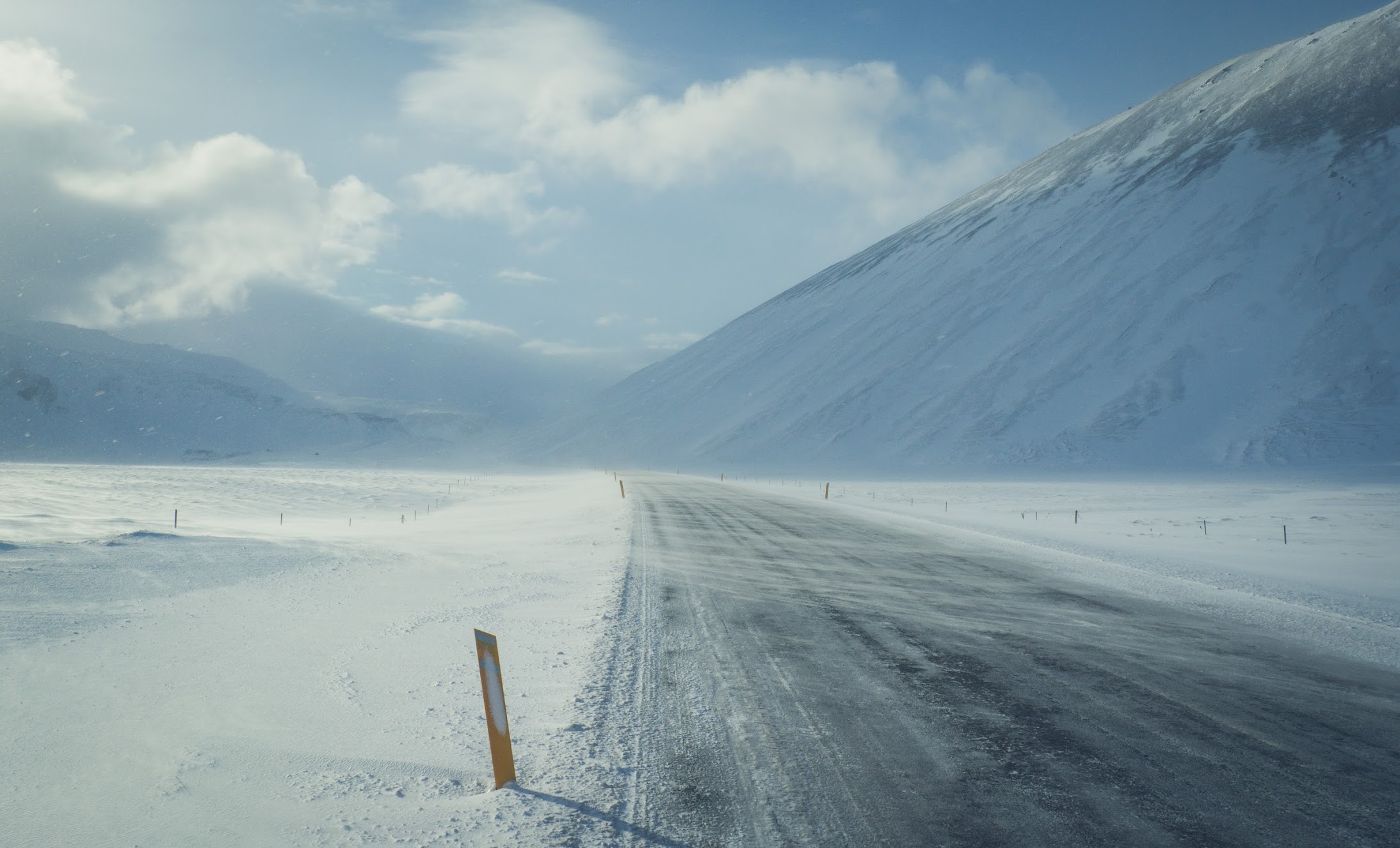 We eventually reached the town of Grundarfjörður, an otherwise unremarkable collection of structures by the sea, except for its proximity to mighty Kirkjufell, the most photographed mountain in Iceland. Known as Sikurtopp, or Sugarloaf, to the Danes, the current name translates to church mountain, and it stands dramatically on a spit of land that juts out into the sea. We saw the famous peak as we approached Grundarfjörður from the east, the beautiful blue skies clear of the heavy gloom at last, eventually parking behind some warehouses by the town’s shipping and fishing facilities. It was a lovely sight, but there wasn’t much else to do there, so we walked back to the car and went on our way. About a couple of minutes down the road, however, we came across a parking lot that was much closer to Kirkjufell, offering a more head-on perspective. We stopped for a moment to take in the view, before clambering back into our ride and praying that the roads ahead of us would be as clear as the skies above. 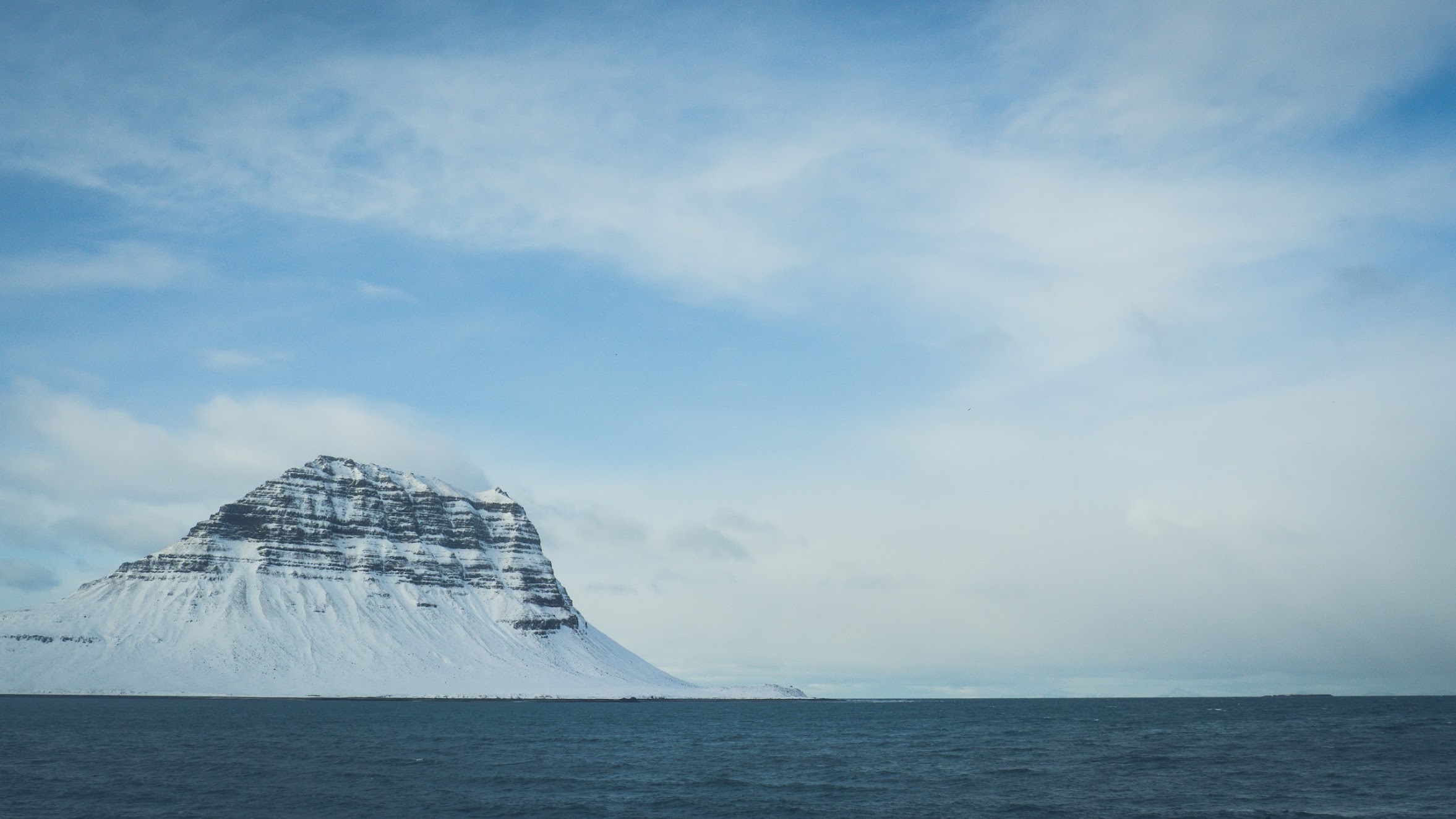 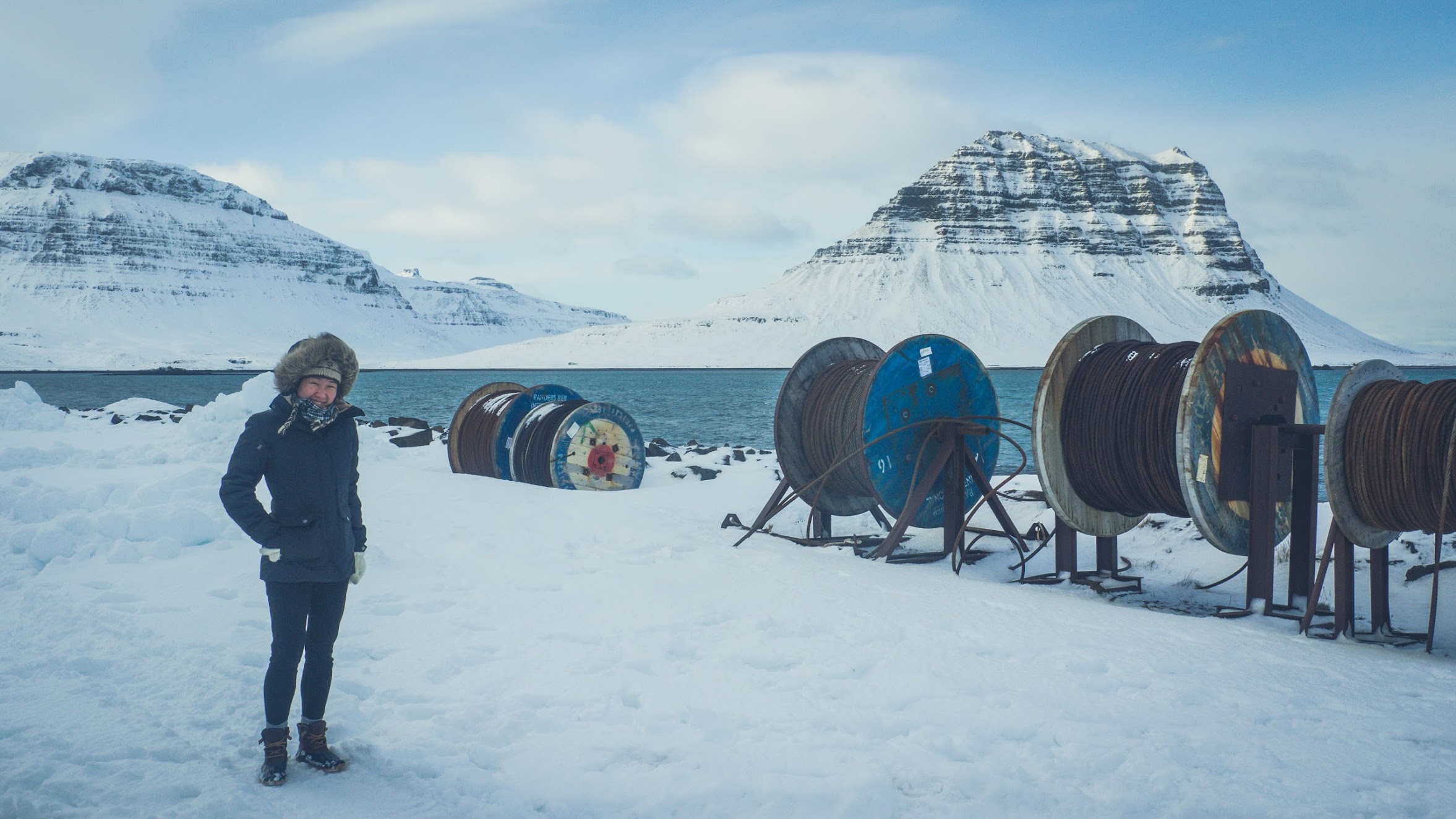 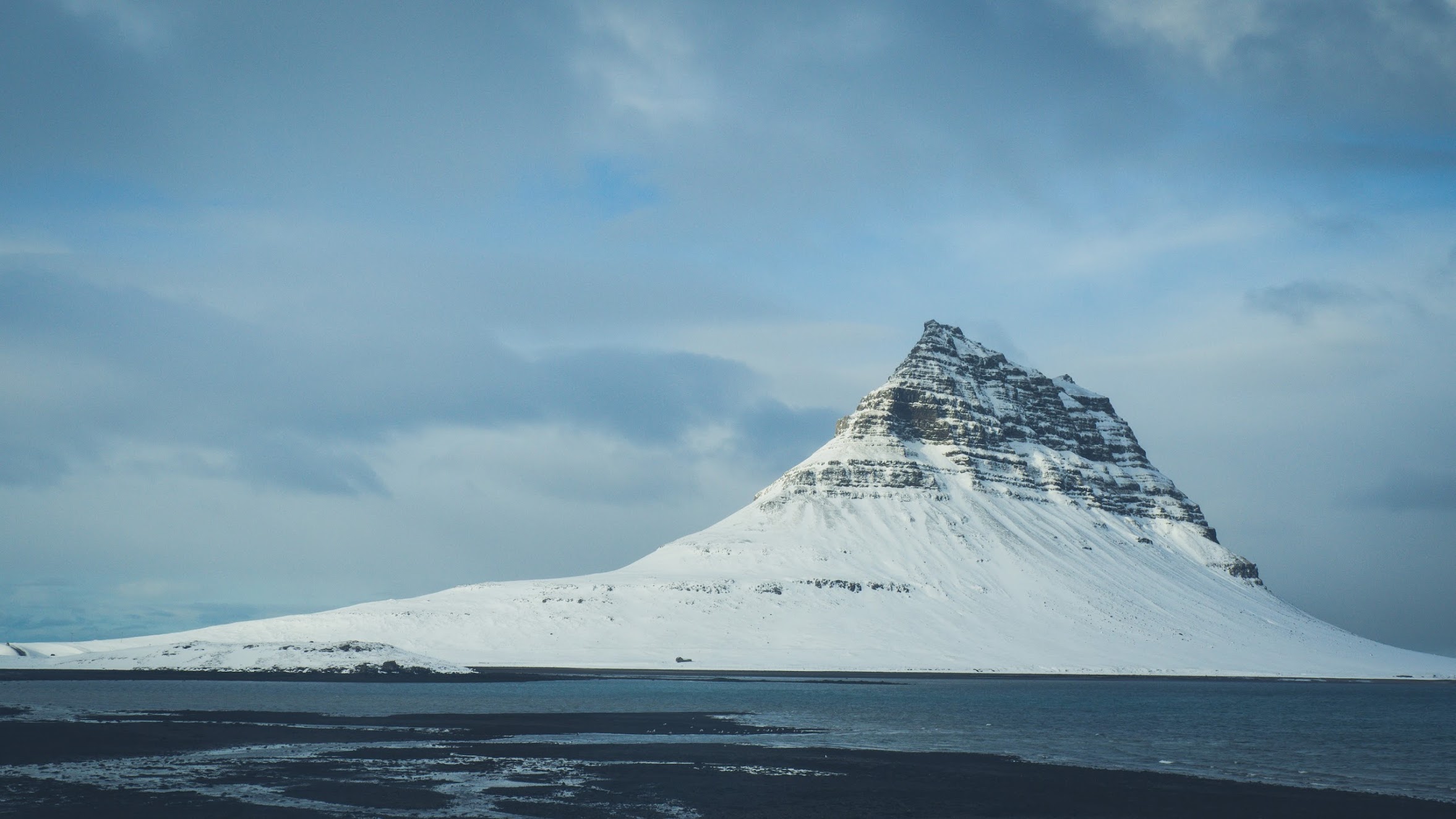 Jules Verne and the Volcano

Beyond Grundarfjörður, Útnesvegur, the road that continued westward and around the far coast of the peninsula to its southern shores, had been marked as closed for most of the morning and afternoon. We were hoping that it might be passable by the time we had to make a decision, and, thankfully, when we refreshed the Icelandic Road and Coastal Administration website at Kirkjufell, it showed that the road had just recently been cleared, though it warned of slippery driving conditions. So we cautiously forged ahead, making our way around the western curve of the peninsula, the wind swooping in off the inland heights and rushing down towards the sea. They weren’t kidding about the ice on the road either, and it made for very slow going at times. After an hour or so of driving, about three-quarters of the way around the tip of the Snæfellsnes, we pulled over into a small parking lot, joining a small group of tourists fighting the wind and ice to get a good look at the legendary Snæfellsjökull. Perhaps most famous for being the entrance to the centre of the world in Jules Verne’s classic novel, this immense volcano dominates the western edge of the peninsula, and, on a clear day, it can be seen all the way from Reykjavík, 120 km away. 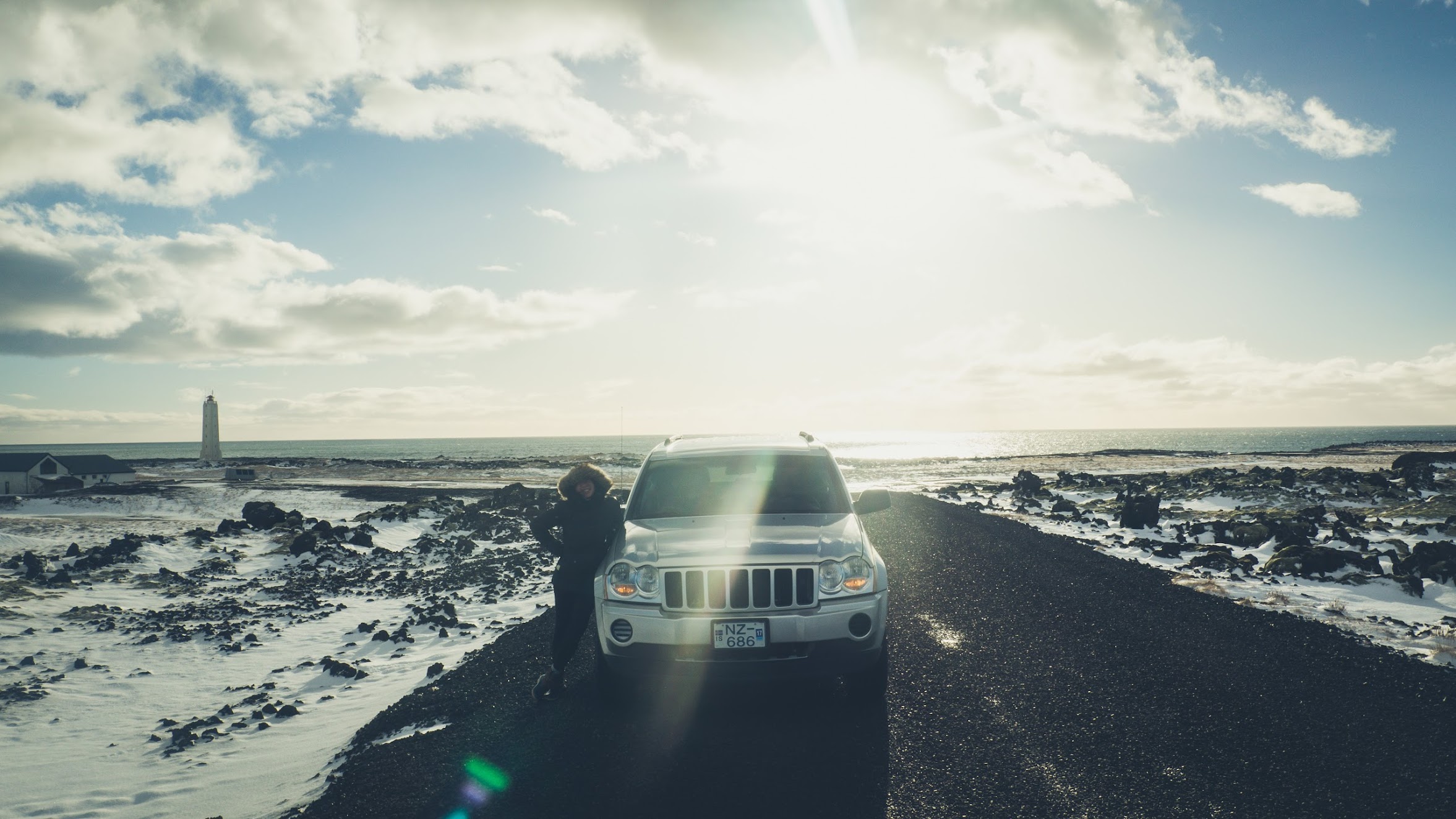 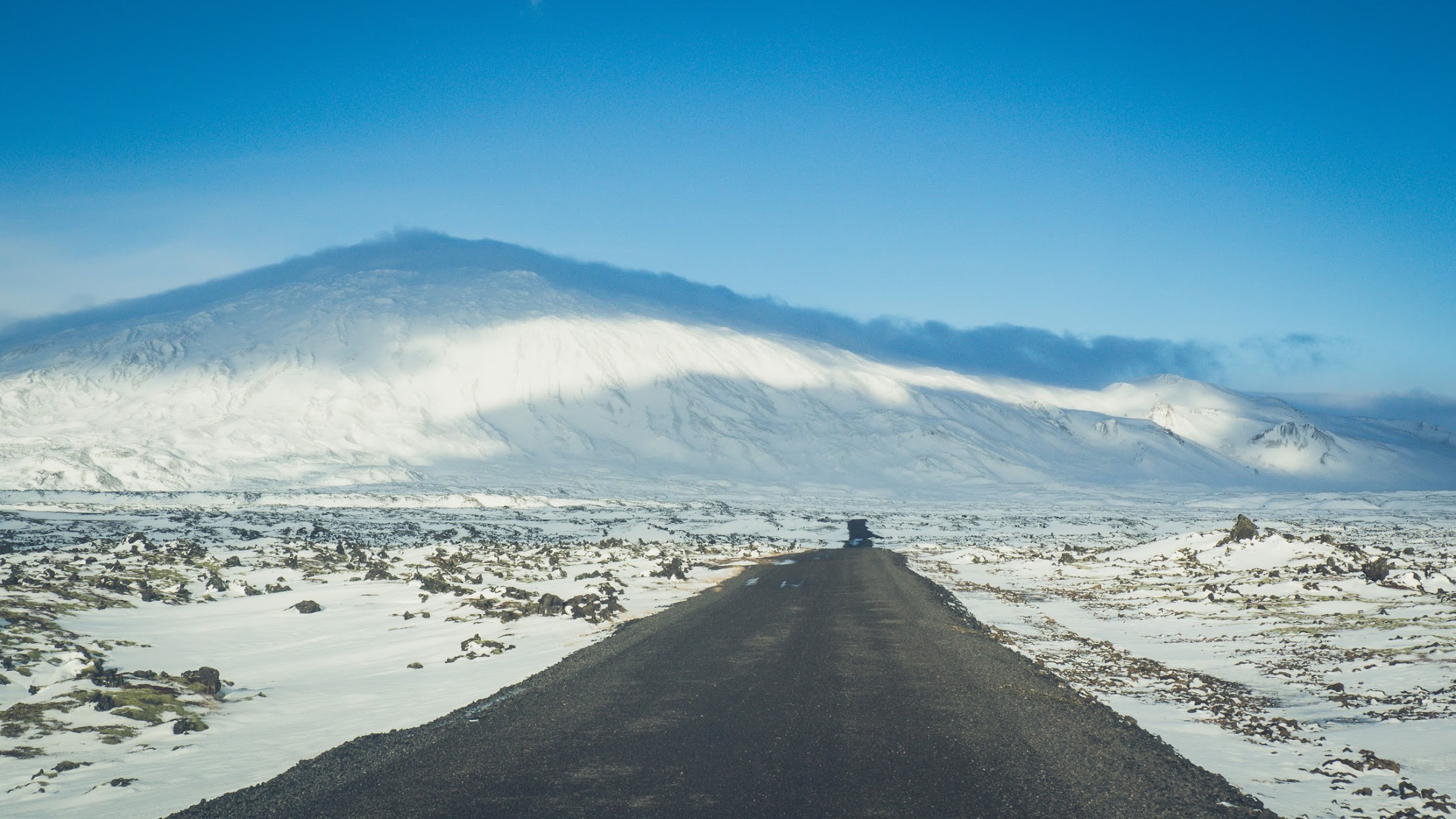 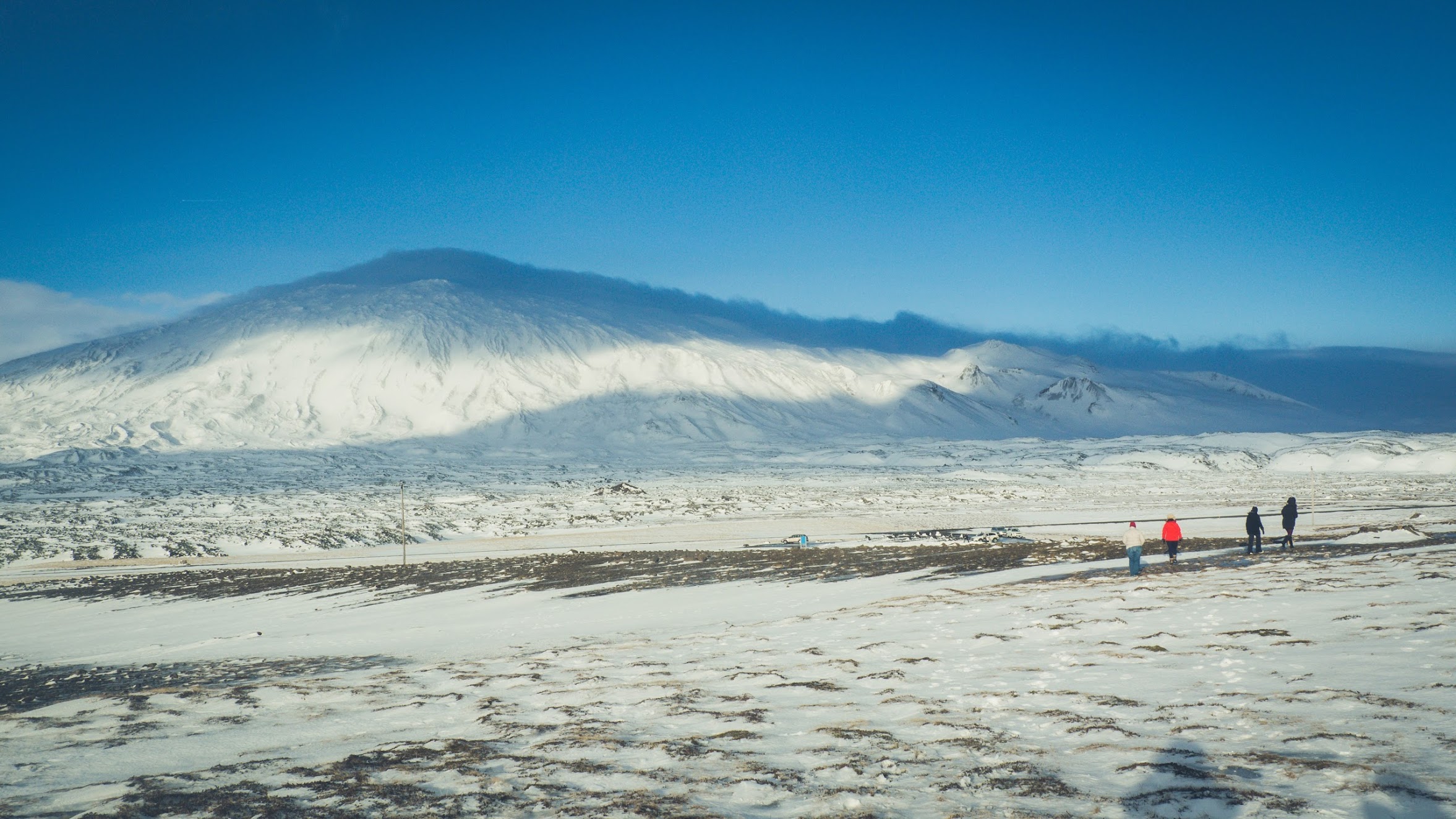 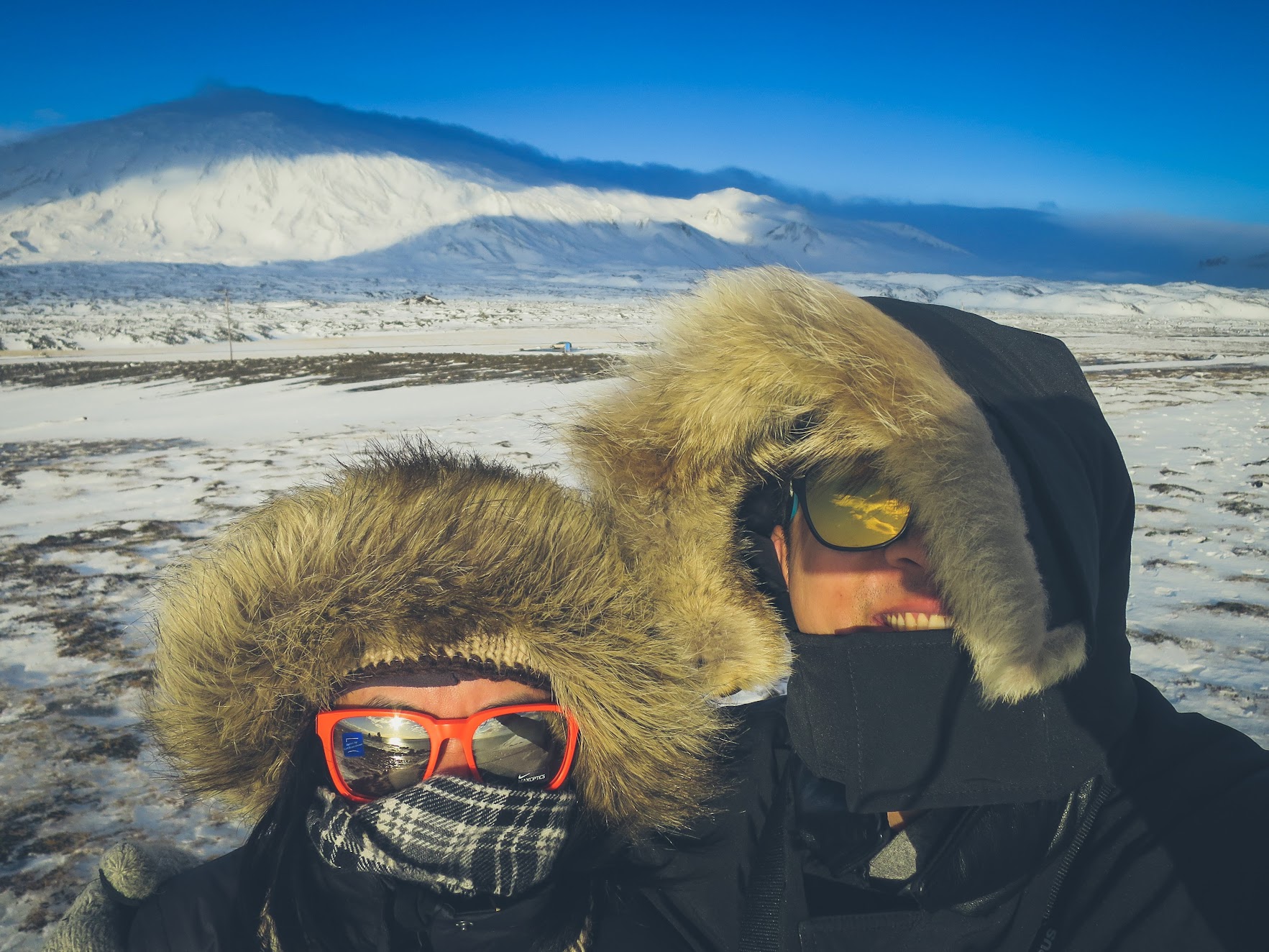 A Blizzard and a Sunset

After Snæfellsjökull, we started our journey back home, driving east along the southern coast of the Snæfellsnes, before turning south along Iceland’s western coast. It was early evening by the time we left the peninsula, and it was then that the weather took a turn for the worse. Sheets of wind and snow blindsided us from all directions, blizzards came and went with alarming irregularity, wiping out all visibility for minutes at a time, and what traffic there was slowed to a crawl. Though it was definitely nerve-wracking at times, we got through it without incident or accident, and for this I am exceedingly grateful for my years of driving in Canadian snowstorms. Finally, after what seemed like hours in a solid white box, we emerged from the storm clouds, without hint or warning, into a beautiful evening sky, the colours of the sunset a marvel that had to be seen to be fully appreciated. 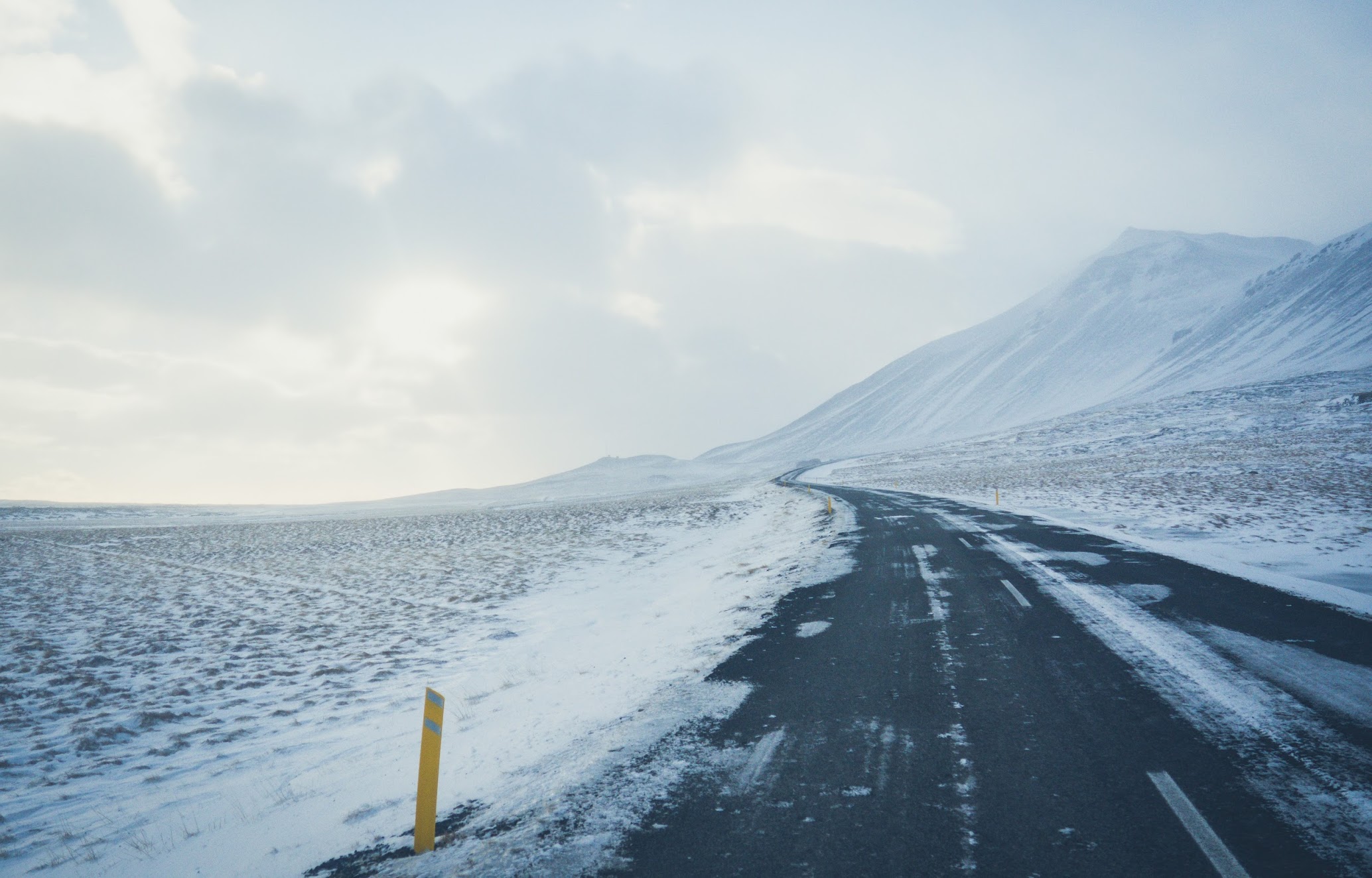 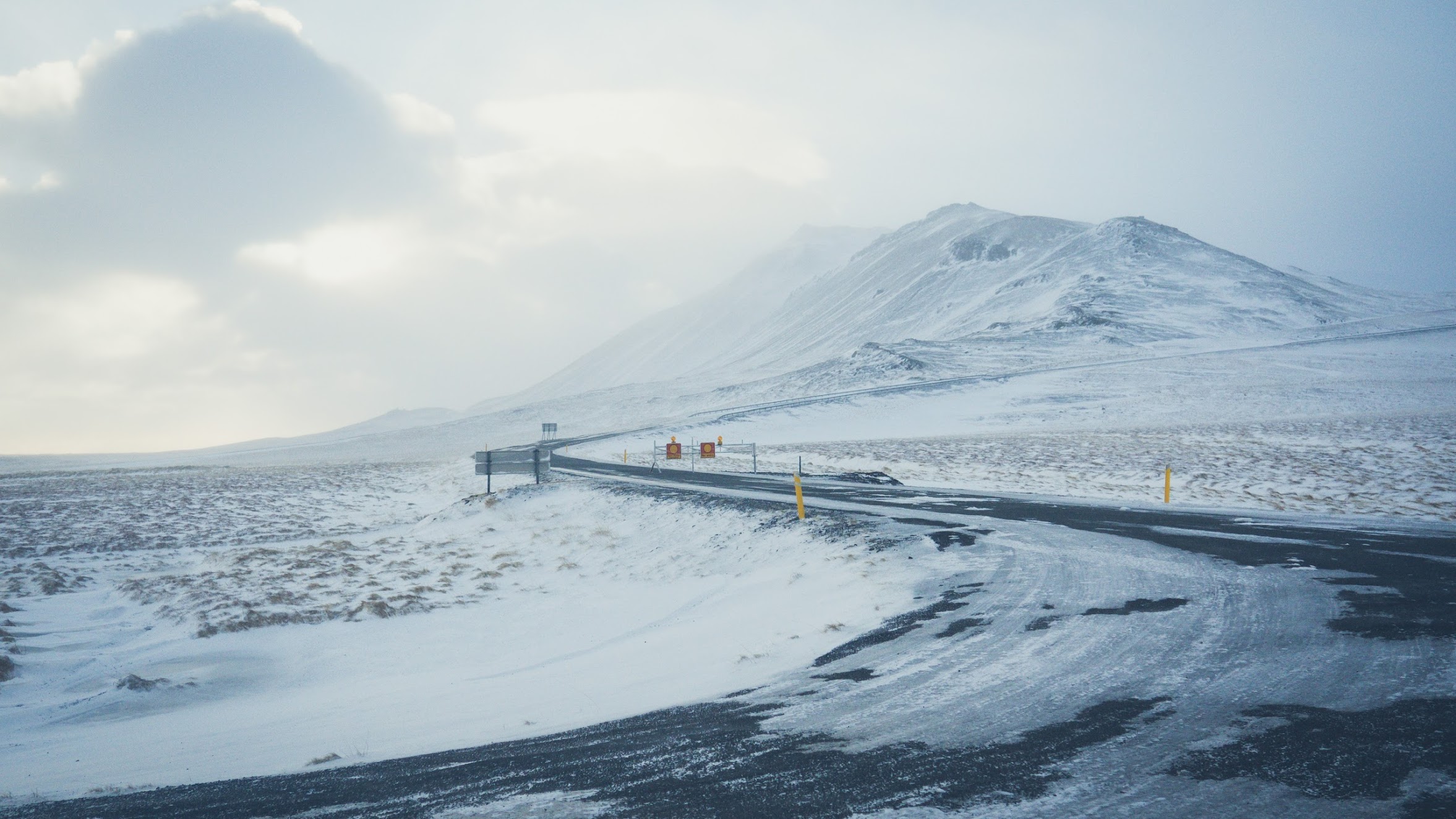 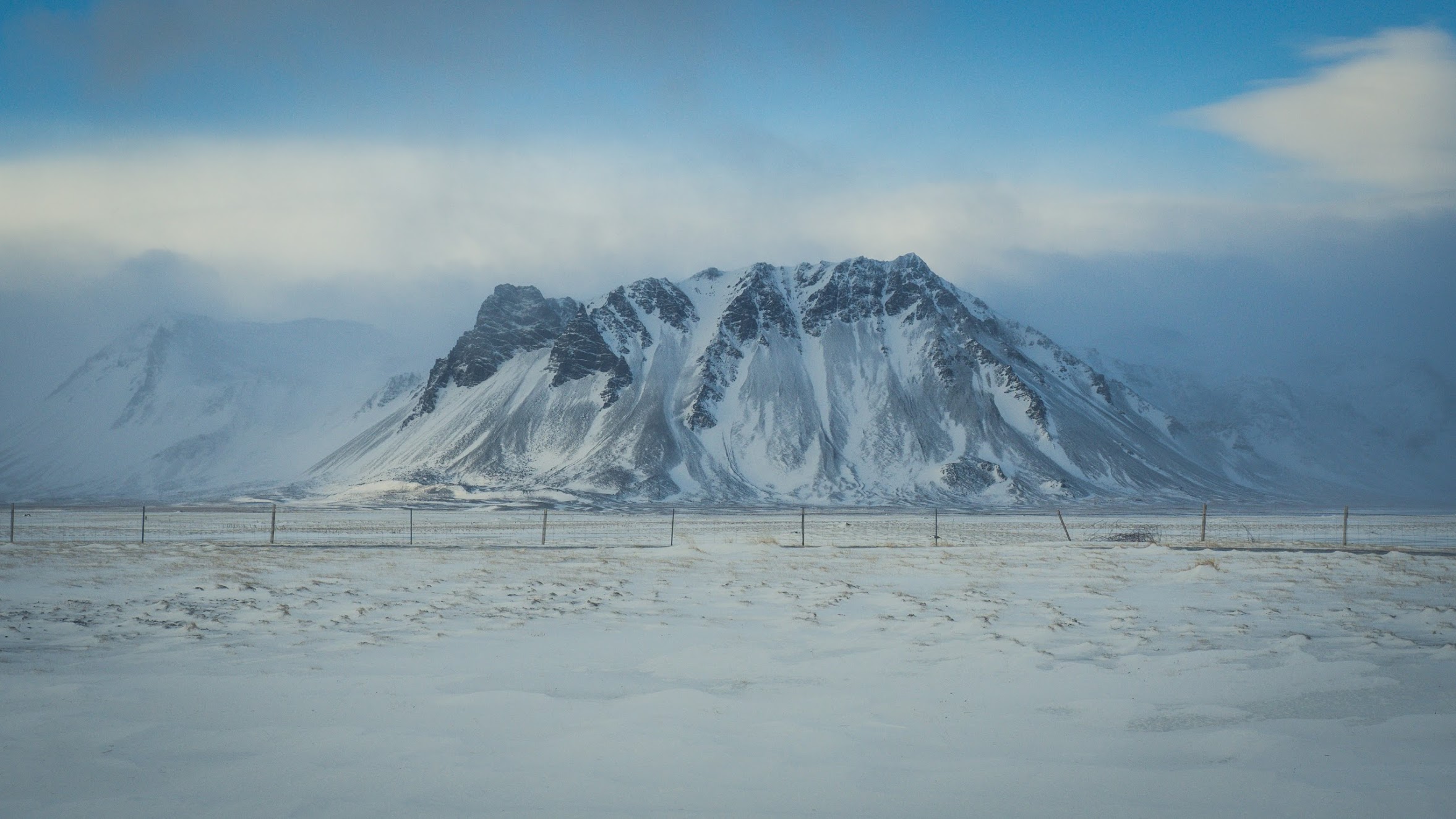 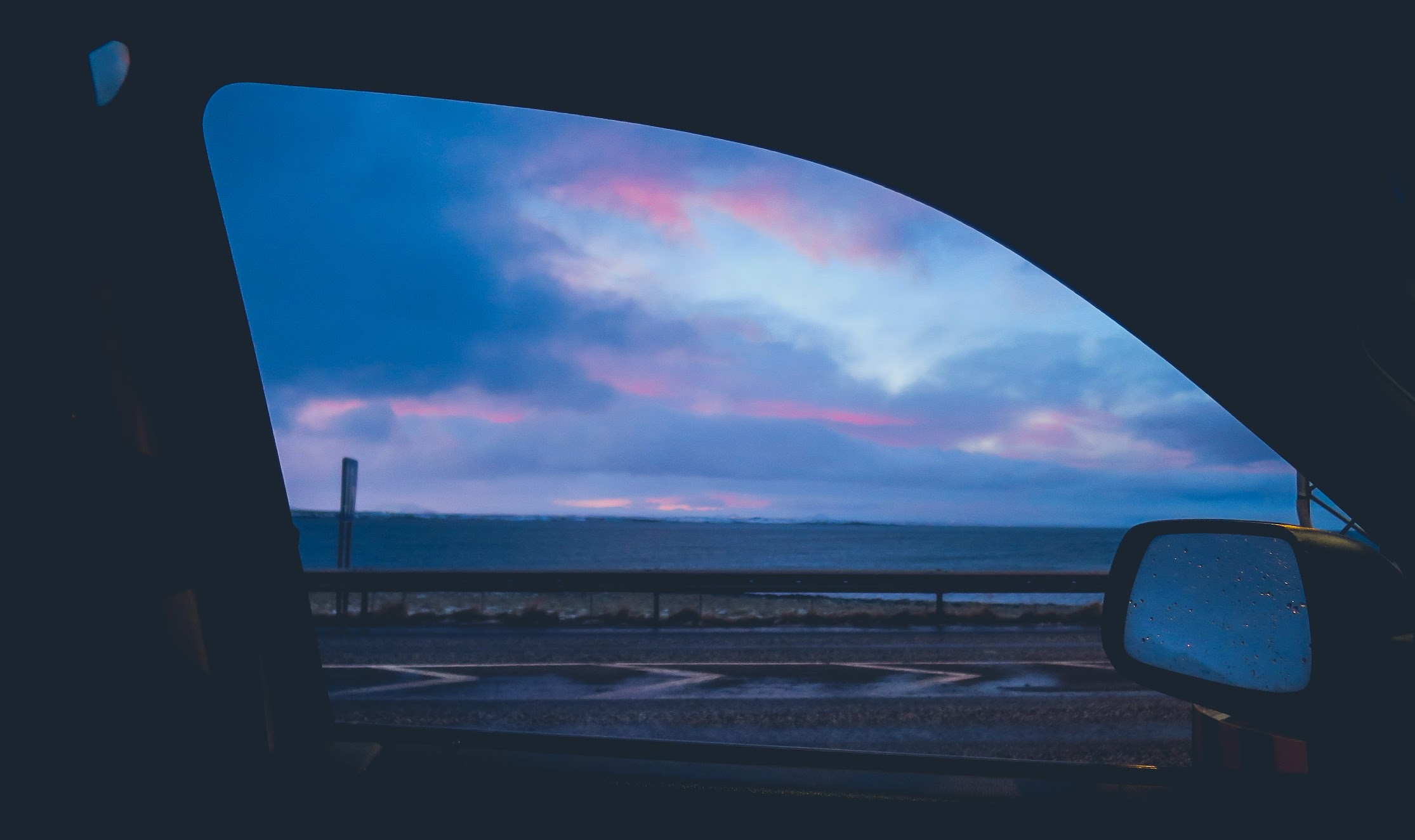 This day that we spent driving around the Snæfellsnes remains one of my most memorable experiences in all my travels. The landscape and scenery were unbelievably beautiful and alien, yet the loneliness and desolation of the winter environment, one completely hostile to humans, weighed heavily on my mind throughout the drive. Every time we slipped off our seat belts and opened our car doors to look around, it was as if we were diving into the cold ocean, a single warm breath held desperately in our lungs, the wind tearing at at our face and extremities, our cold fingers scrambling desperately to press buttons on a frozen camera, and the ice beneath our feet always shifting and treacherous. When we’d had just about enough of the wind and cold, we leaped back into our silver carriage, hearts hammering away in our chests, the sound of the flurries outside replaced by breathless laughter and excited chatter. All told, the entire drive took around 12 hours, with plenty of stops and inclement weather in between. With the wild, exhilarating Snæfellsnes done and dealt with, our plan the next day would be much less stressful – hanging out and sightseeing in the northernmost capital in the world. 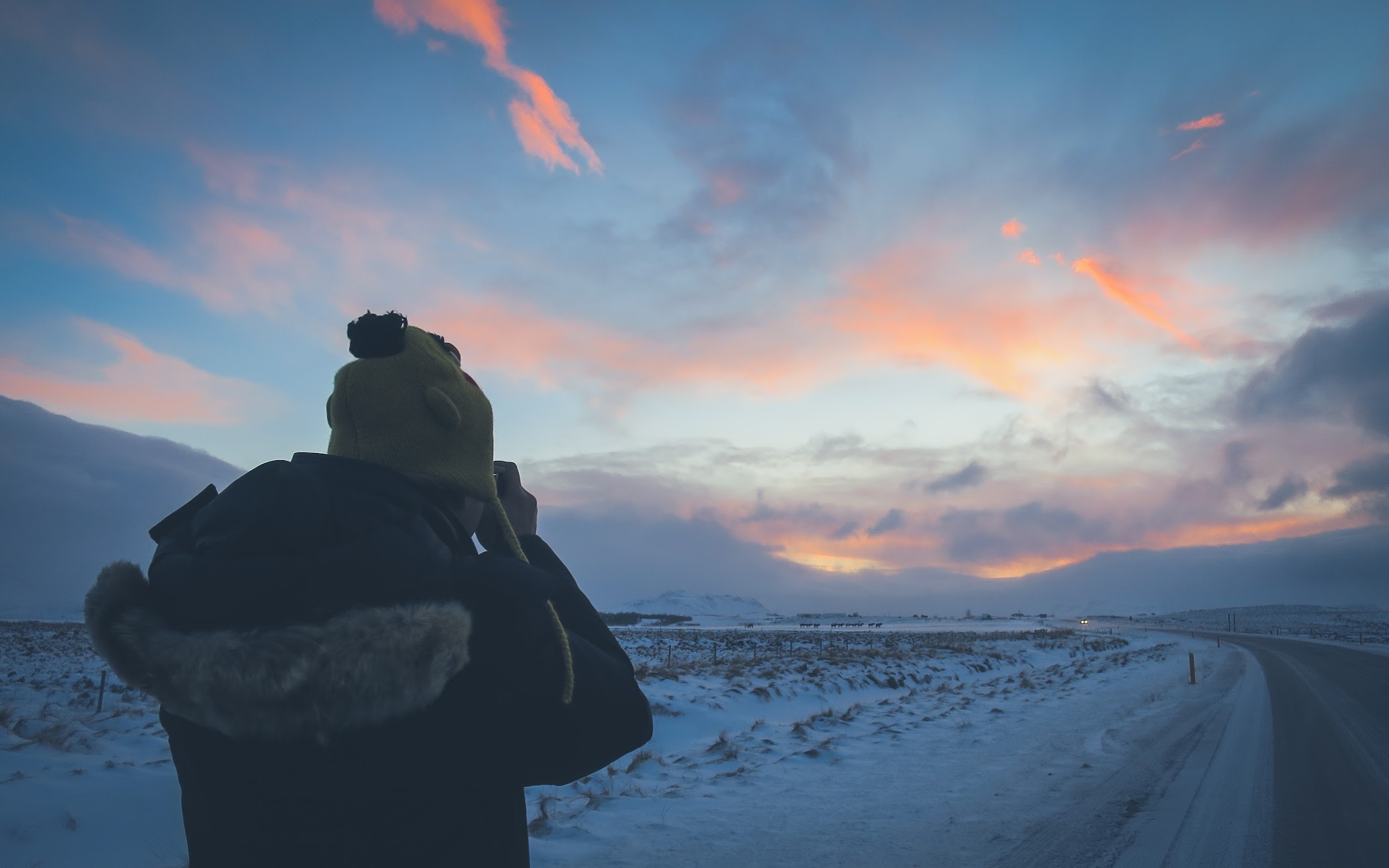