A cursory and completely unacademic survey of cities around the world will reveal, with enough fudging of lines and the exclusion of any and all examples to the contrary, a pattern of psychological and regional division within national borders familiar to all amateur geographers and armchair thinkers. For every Sydney, there is a Melbourne, for every Seoul, there is a Busan. For every Toronto, a Montreal, for every Madrid, a Barcelona, and, of course, for every New York, there is a Chicago, a city whose nickname, Second City, practically shouts out its asymmetrical status vis-a-vis the Big Apple. The larger metropoles are often the political, economic, cultural, and entertainment hubs of their countries, where the elites rub shoulders with the movers and shakers, hidden in the penthouses of their glass towers. The second cities, on the other hand, live, and even thrive, in the shadows of their more famous brethren, developing unique civic identities that play off their underdog reputations.

In Japan, the coveted slot of second city falls to Osaka, an irreverent town of 2.6 million on the shores of the Seto Inland Sea. As perhaps the definitive city of the Kansai region, it embodies all the idiosyncrasies of second citydom, offering itself as the more earthy alternative to Tokyo, of the neighbouring Kanto region. Traditionally a city of merchants, Osaka residents have a reputation for pragmatism and friendliness, to go along with their love of food and humour. I’d spent a frenzied few days the previous June in Tokyo, while Ashley was on a business trip there, and I fell head over heels for the Tokyo fantasy. Reading about Osaka, though, especially the parts about food and humour, seemed to hint at a city closer to my own heart. 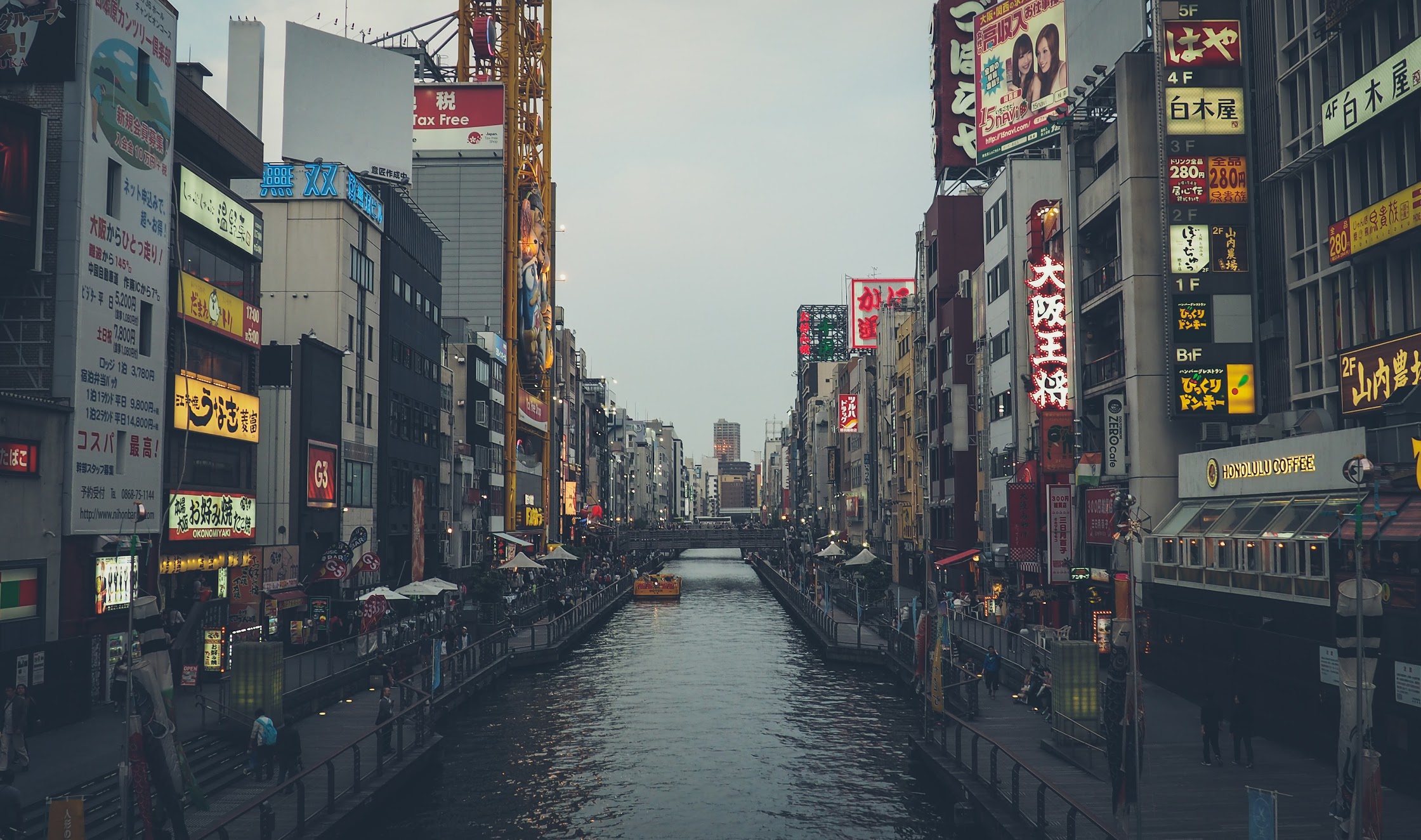 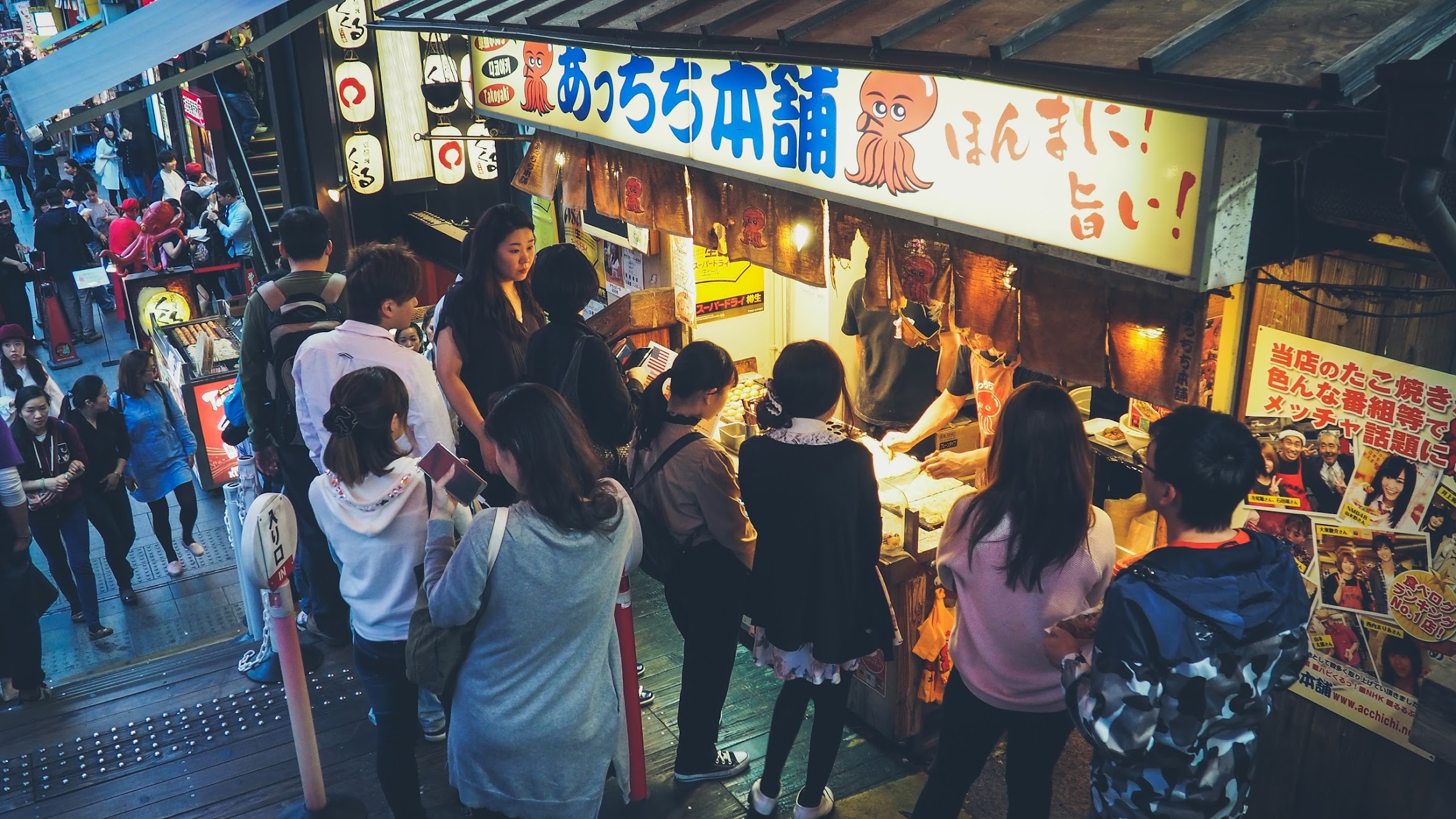 As mentioned in my earlier posts for this holiday, we actually stayed in Osaka every night, but we didn’t get a chance to see the city we slept in until we had finished with Kyoto. After coming back from Arashiyama in the late afternoon, Ashley and I went out on our own, walking north along the covered shopping streets of Ebisubashisuji to Dotonbori, a popular eating and entertainment district by the canal of the same name. The story of Dotonbori starts with a man named Yasui Doton, in the early 17th Century. As a merchant, and quite an entrepreneurial one at that, he dreamed of connecting two separate channels of the Yokobori River with a canal, to give a boost to the local economy. Unfortunately for Yasui, he met his end at the Siege of Osaka, leaving the remainder of the canal construction to his cousins, which they completed in 1615. In 1621, Dotonbori, or Doton’s canal, was established as the official entertainment district for Osaka, attracting numerous theatre companies and groups to set up shop on its banks, as well restaurants and food stalls lured by the promise of a steady clientele.

The days of the traditional theatre arts are long gone, but the restaurants have remained. As Ashley and I walked by the waterway in the dying afternoon light, neon signs of all shapes and colours buzzed and hummed into life all along the canal. Wide boardwalks line both banks of Dotonbori, creating a pleasant walking space, separated from the outdoor seating of the canal-side restaurants by a few steps. Tired shoppers sat and leaned against the metal railings, while yellow barges carrying rows of tourists slowly plied the dark channel. The main street of Dotonbori, behind the buildings closest to the water, was already packed with the evening crowd – tourists, students, locals pouring in after office hours, and an army of restaurant workers getting ready for the incoming dinner rush. From its perch around the corner from the Ebisubashi, one of several bridges that cross the canal, the famous mechanical crab of the Kani Doraku restaurant waved slowly above the masses, while a dizzying sea of faces stretched into the far distance, along the Shinsaibashisuji covered shopping street. 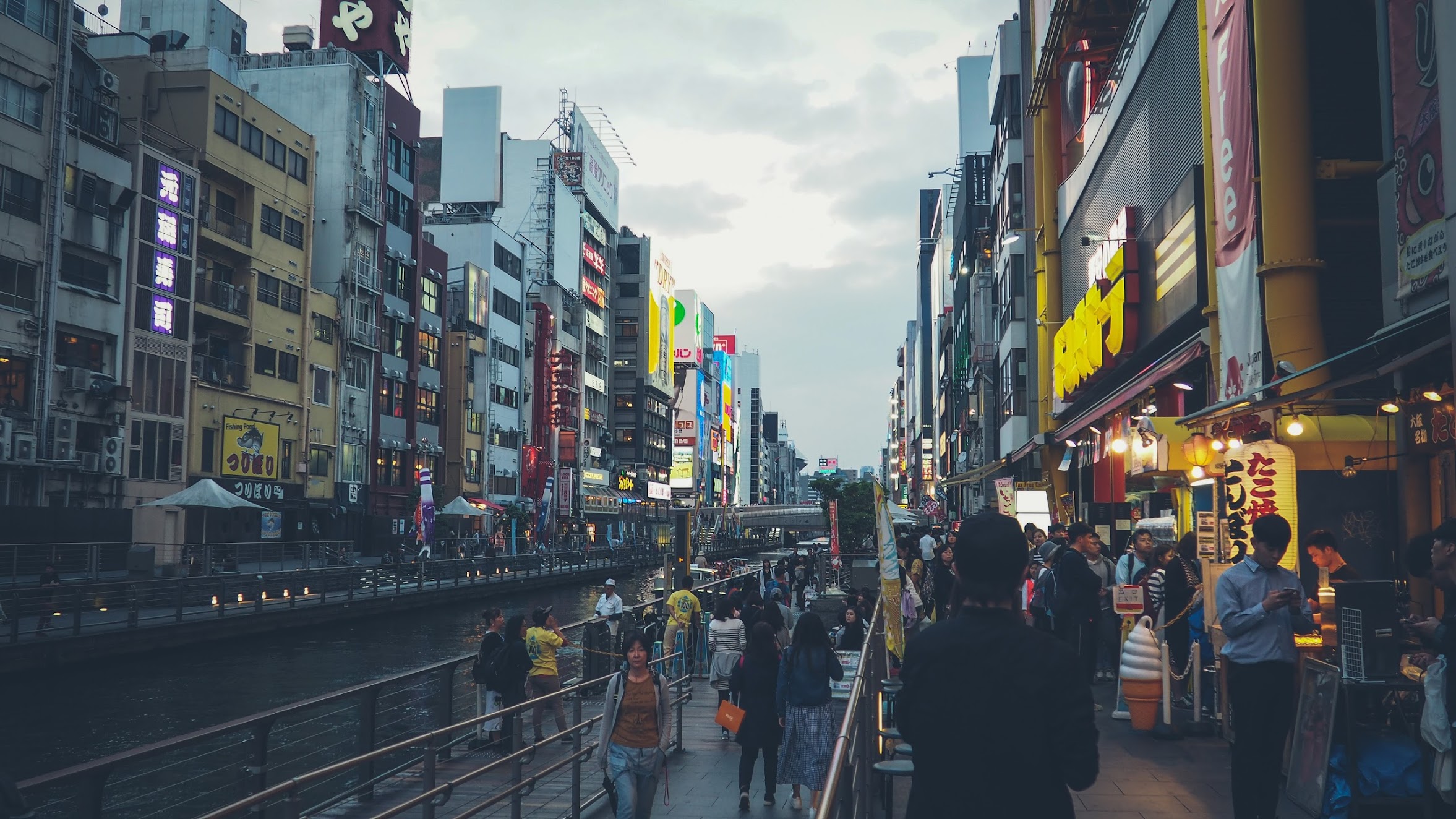 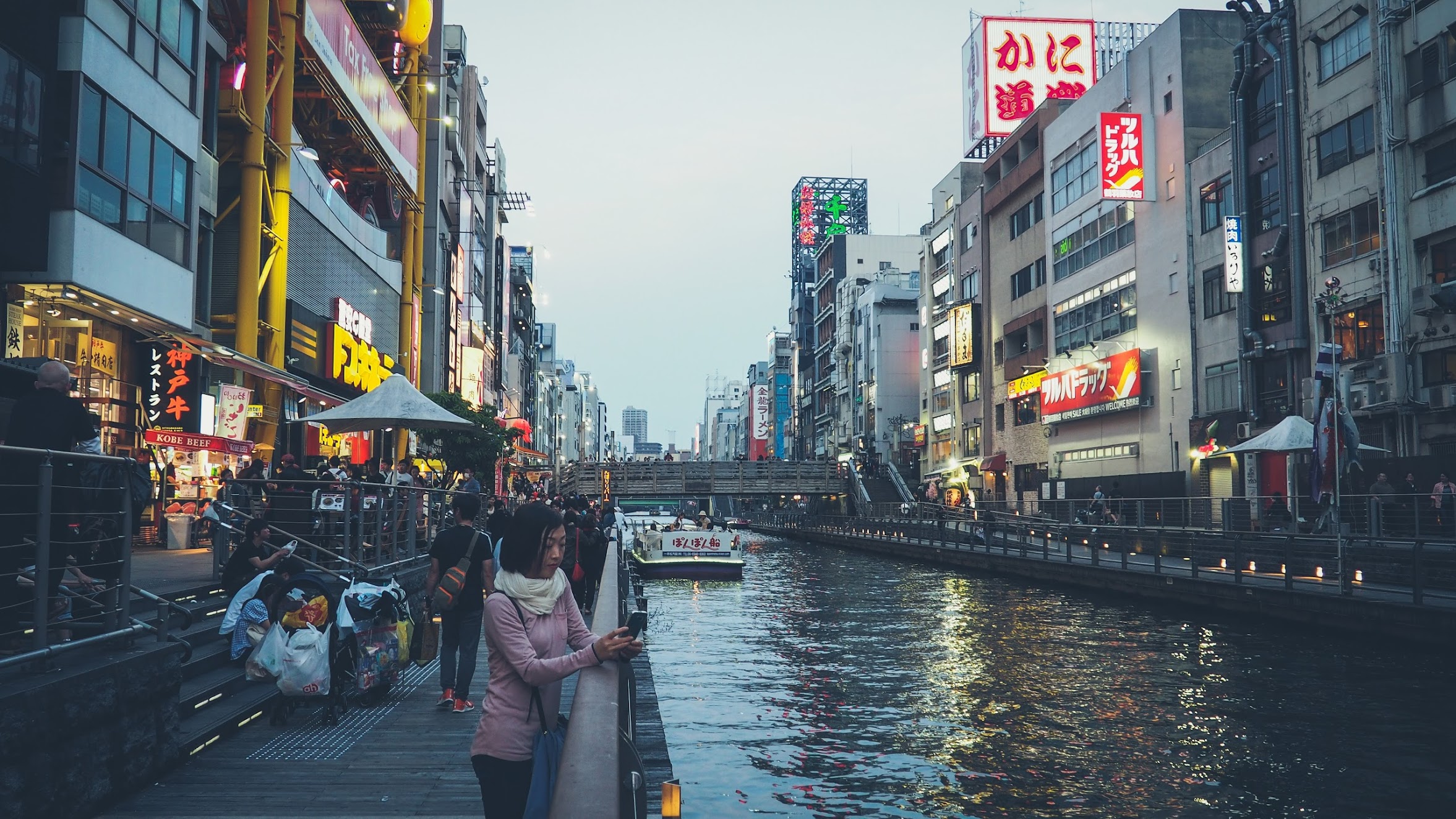 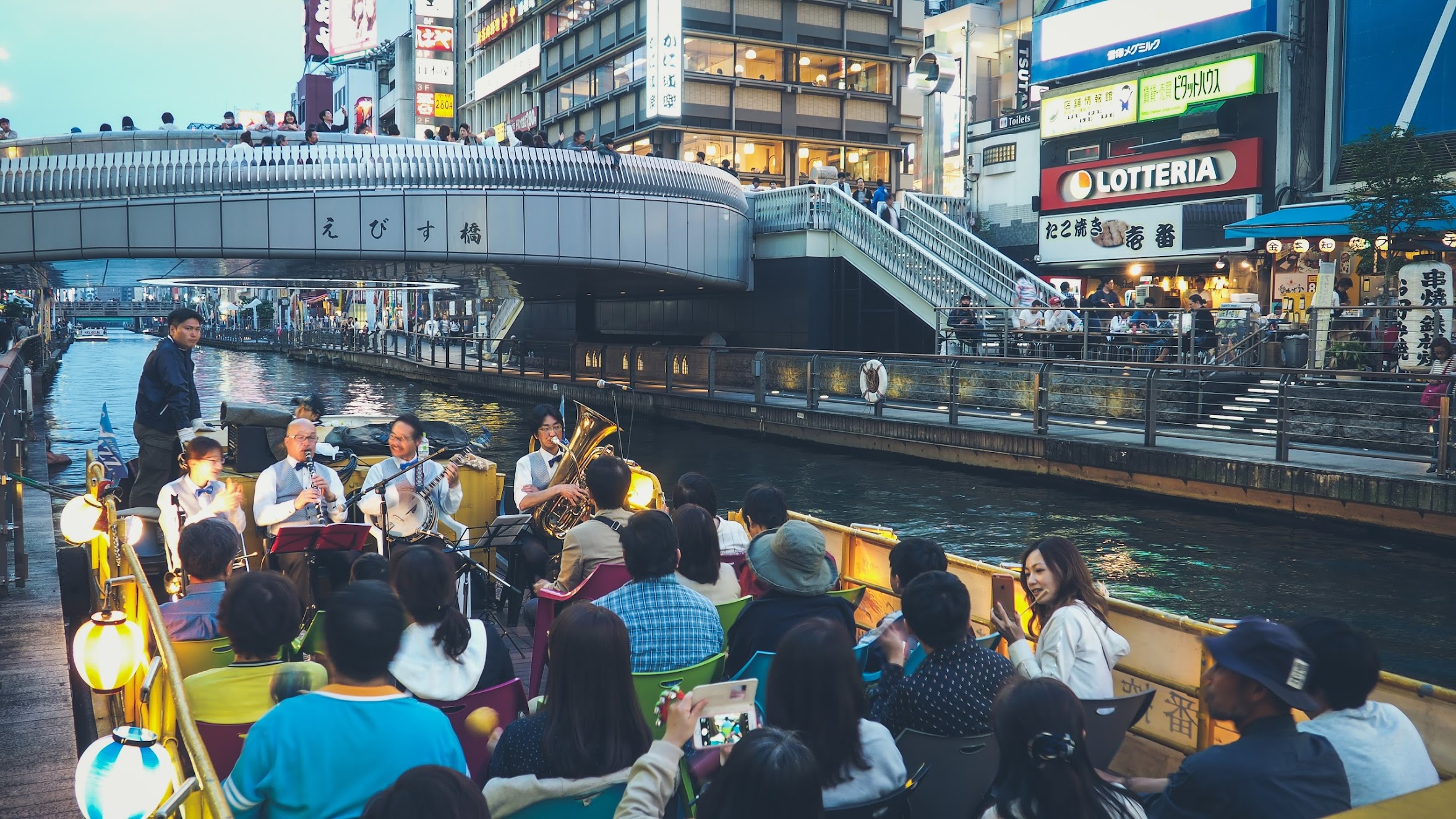 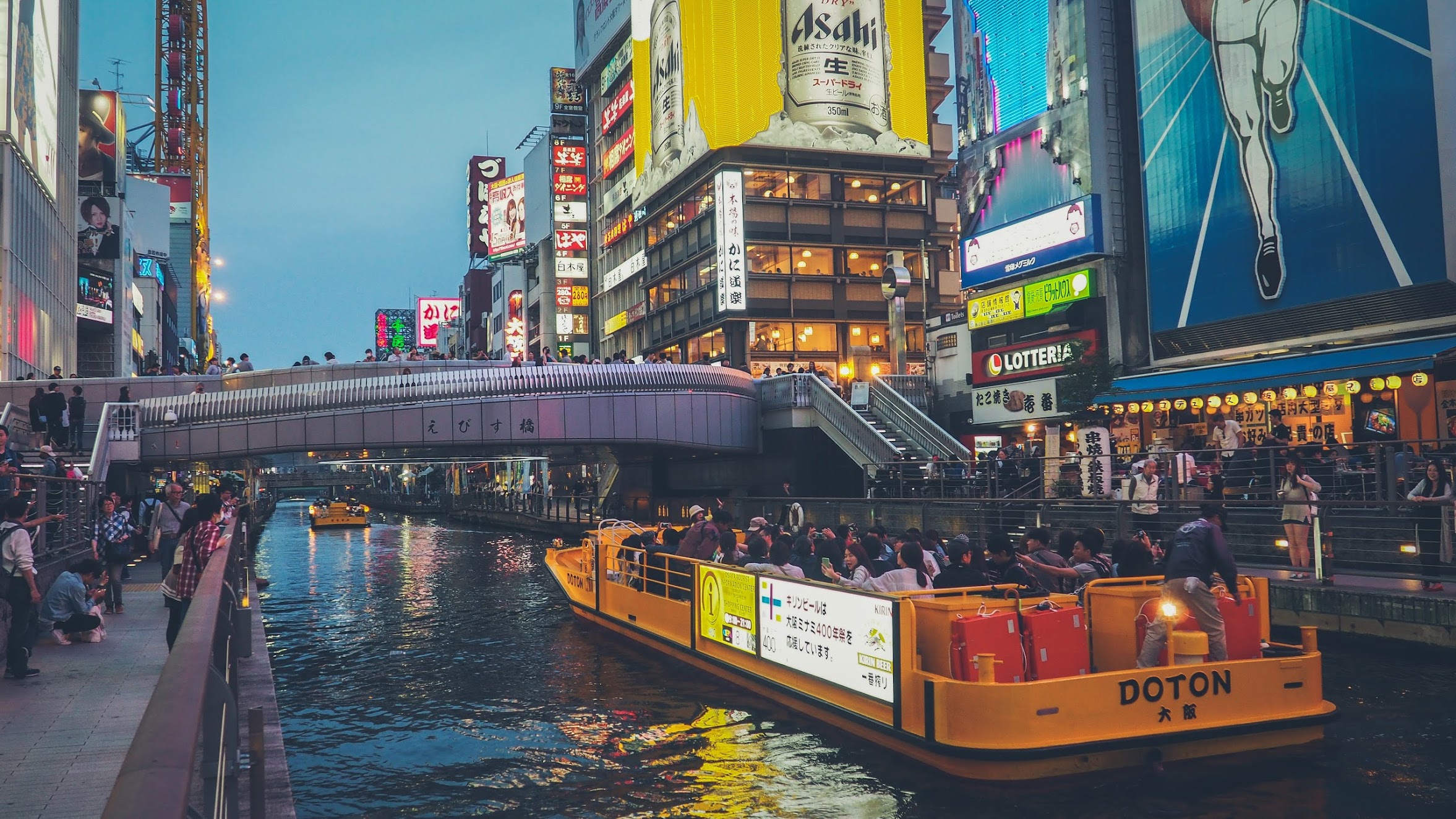 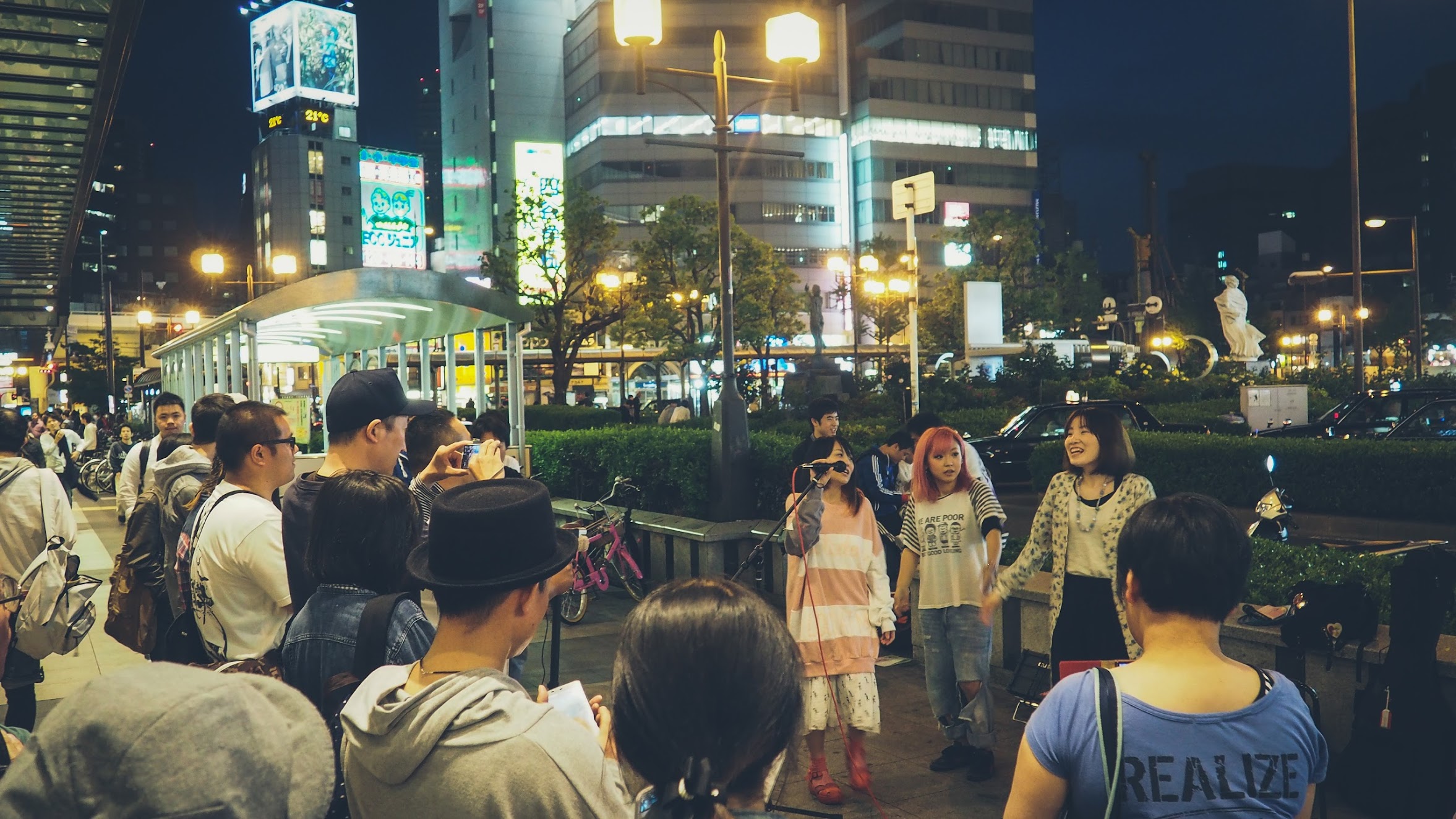 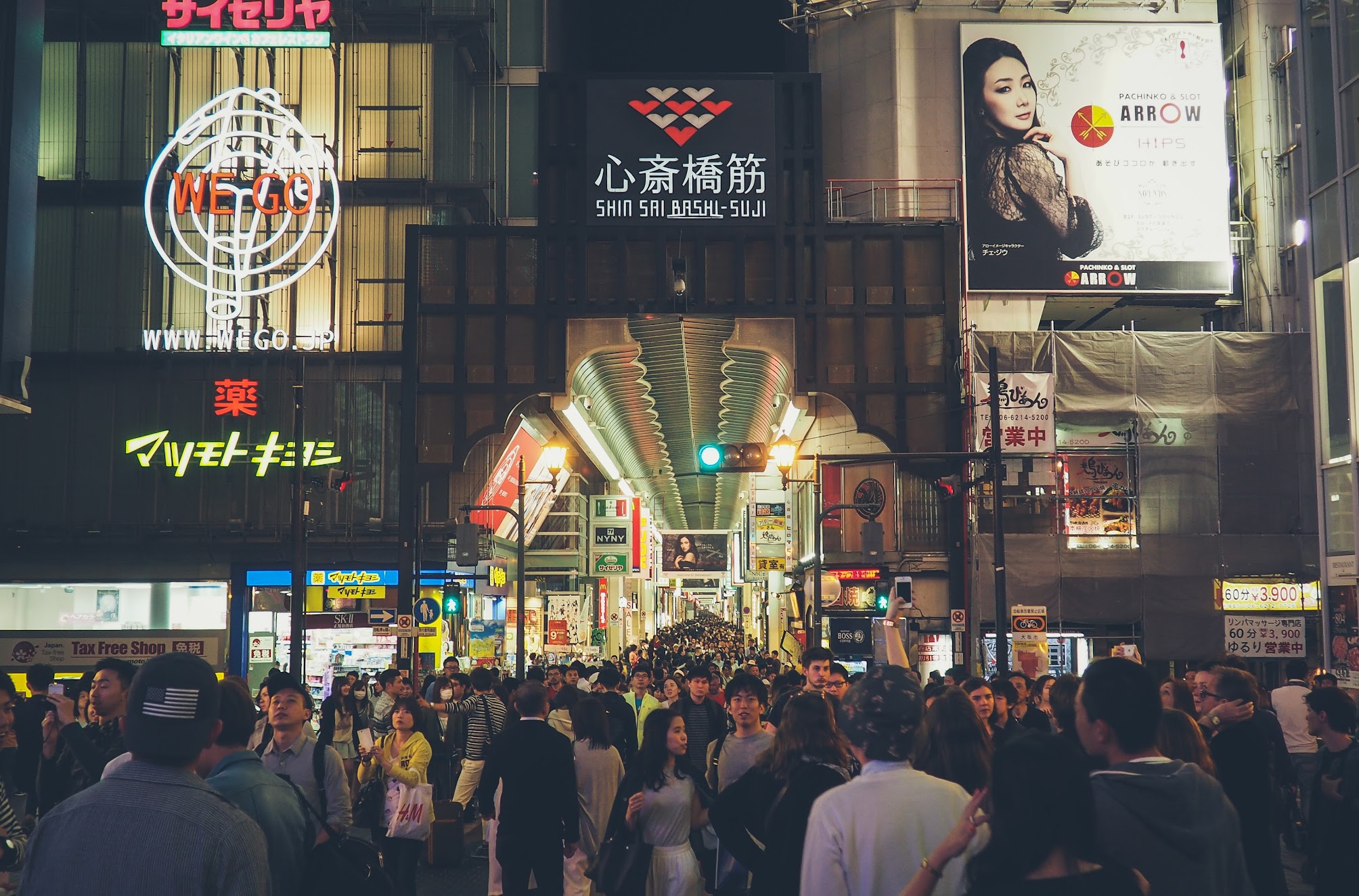 In the evening, we reunited with Ashley’s family, meeting up with them just before dinner. Eating in Osaka is not to be taken lightly, and, as we were only going to have one dinner here, we wanted to make sure it was a good one. There’s no shortage of good restaurants in town, serving a wide variety of dishes and regional cuisines, but one dish stood above them all – the prized Matsuzaka beef. One of the three top beef types in Japan, along with Kobe and Yonezawa, Matsuzaka is known for its high fat-to-meat ratio, sourced from the nearby Mie Prefecture. After a bit of looking around, we booked a table at the Dotonbori branch of Matsuzakagyu Yakiniku M, a chain of restaurants specializing in barbecued cuts of Matsuzaka beef. The menu was absurdly tantalizing in its variety and description of fatty meats, but we ended up ordering the DX Platter, which included four different cuts of Matsuzaka, as well as two different cuts of Wagyu. There were noticeable gradations and degrees of flavour and texture with each cut, and we found that we each preferred different qualities. It was all incredibly delicious, though, and the amount of meat was just right. We did a bit of walking around Dotonbori after dinner, recovering from the torpid effects of mass meat consumption, before ambling back to the sweet comfort of our hotel rooms. 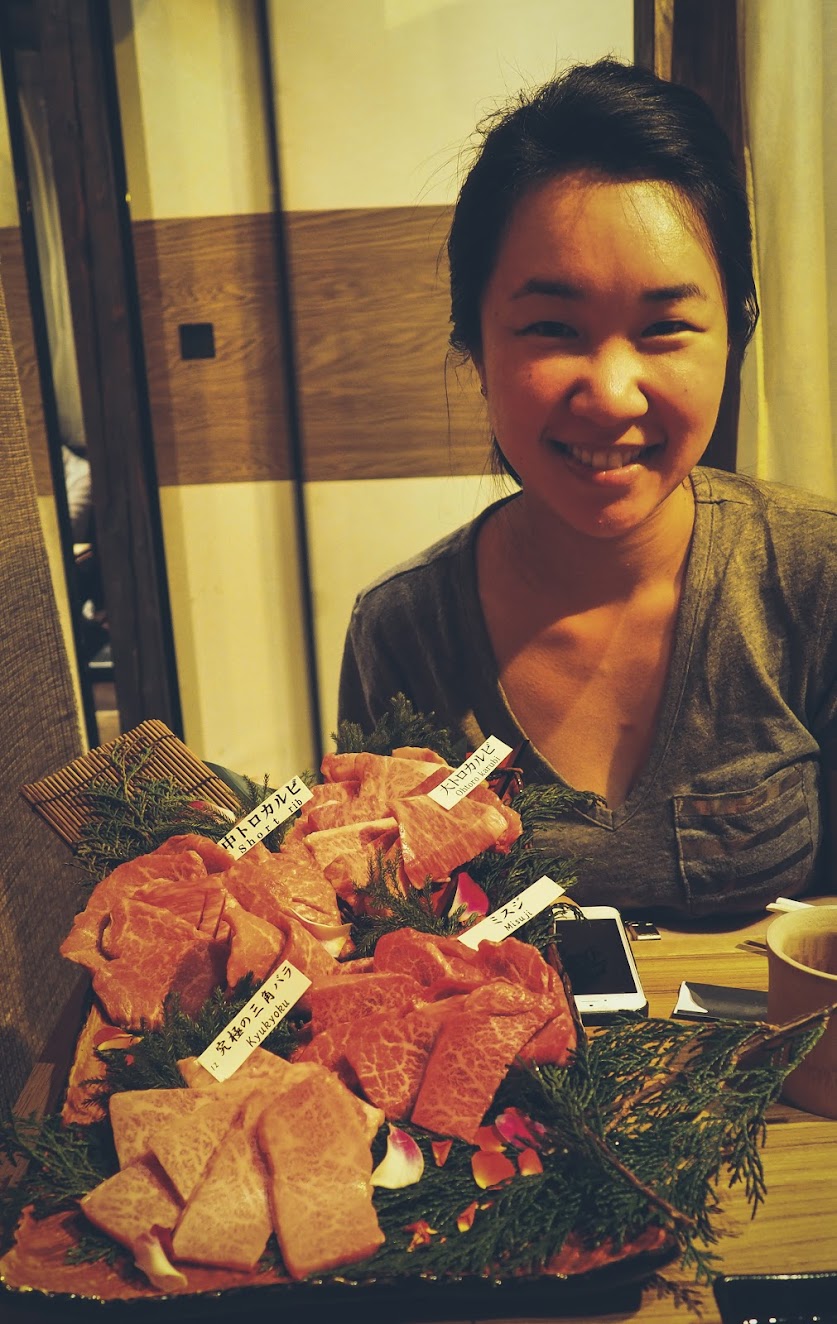 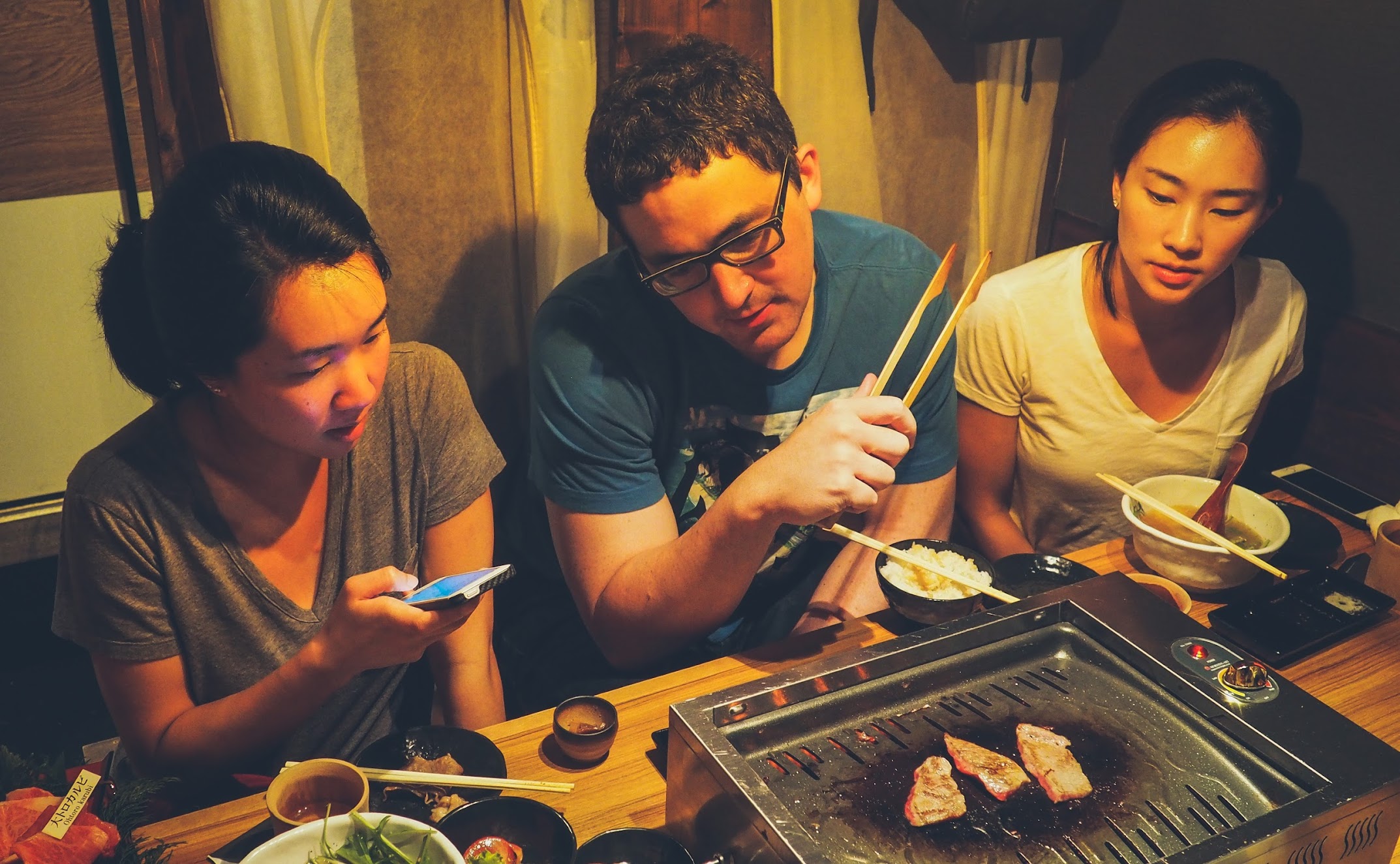 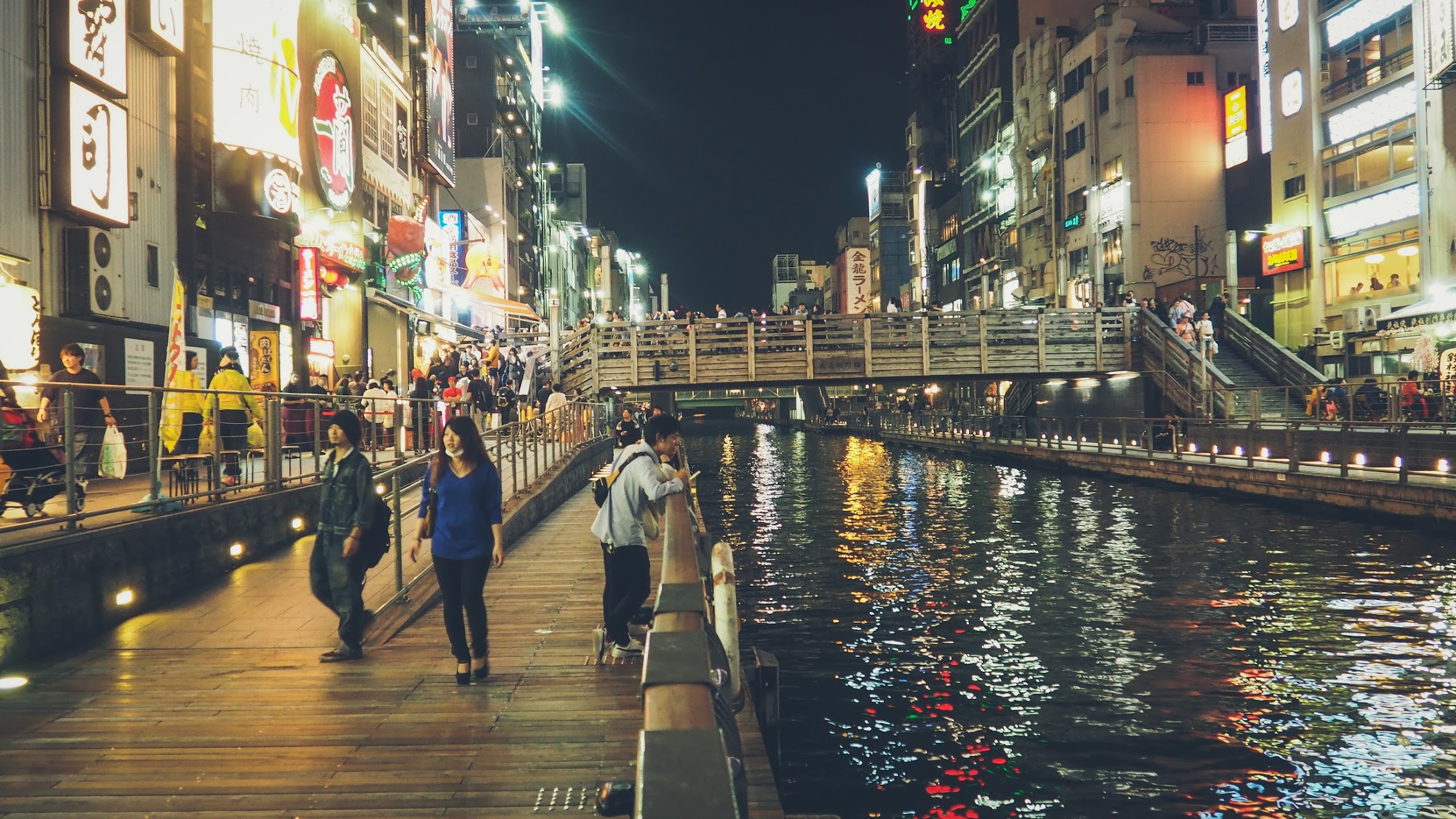 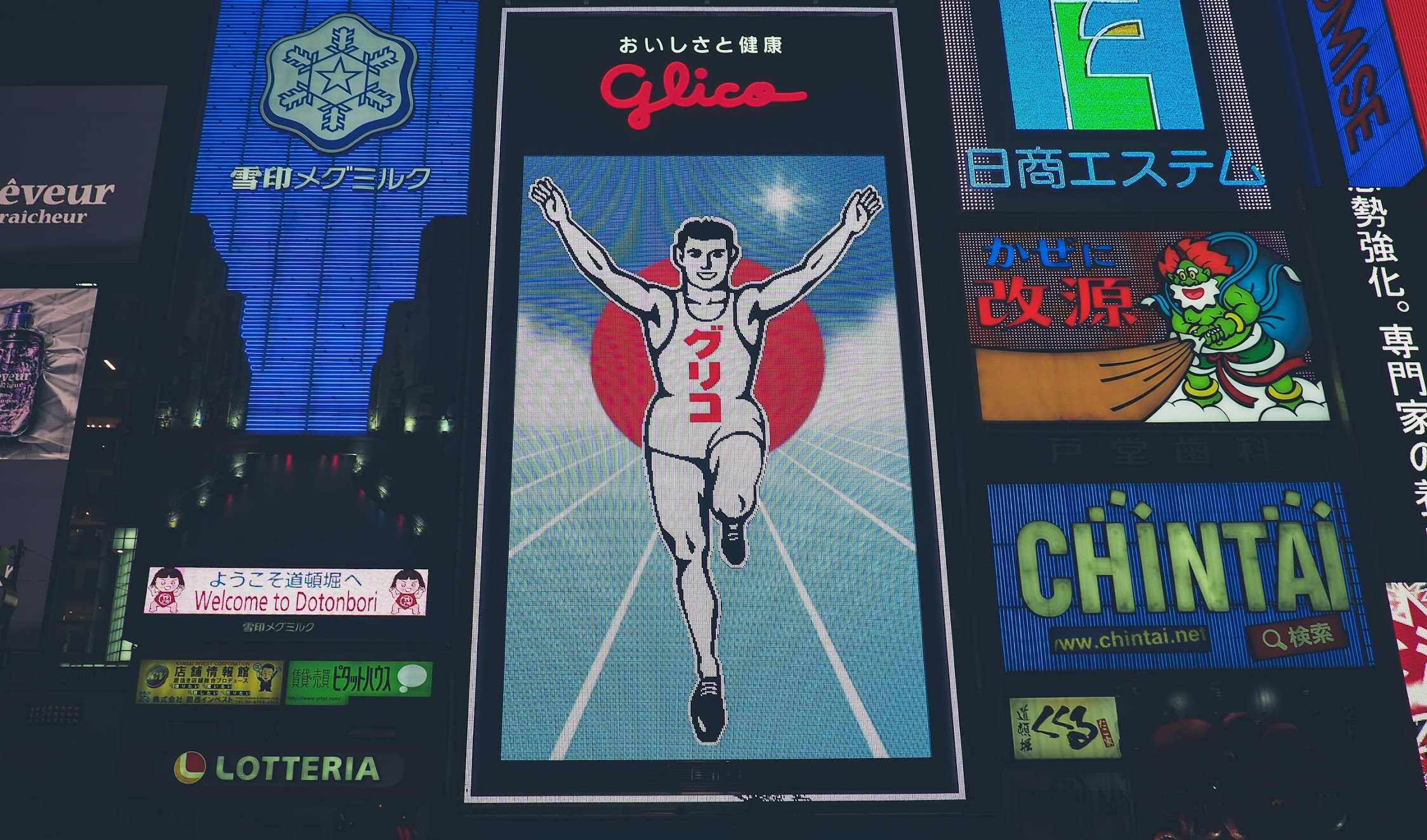 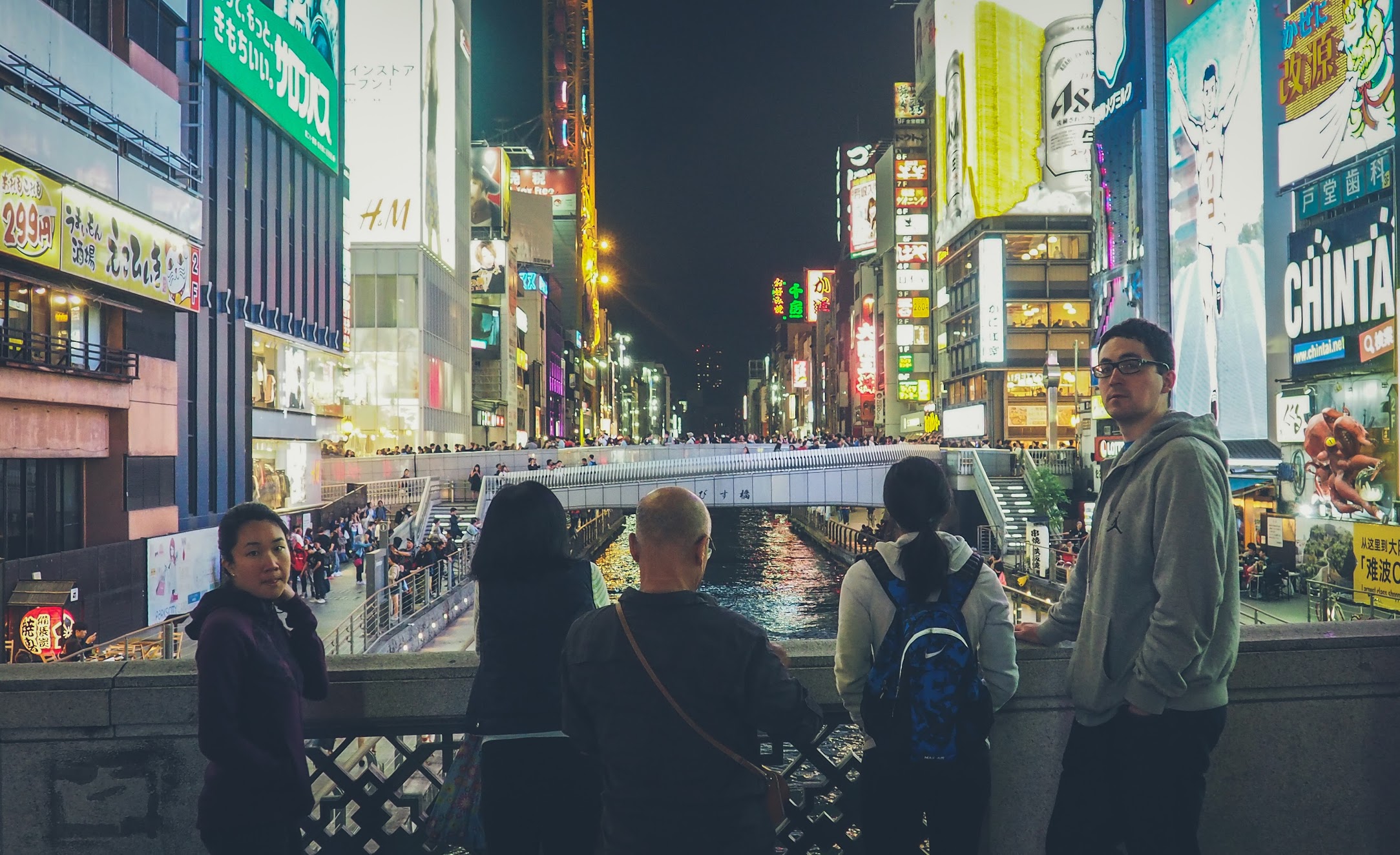 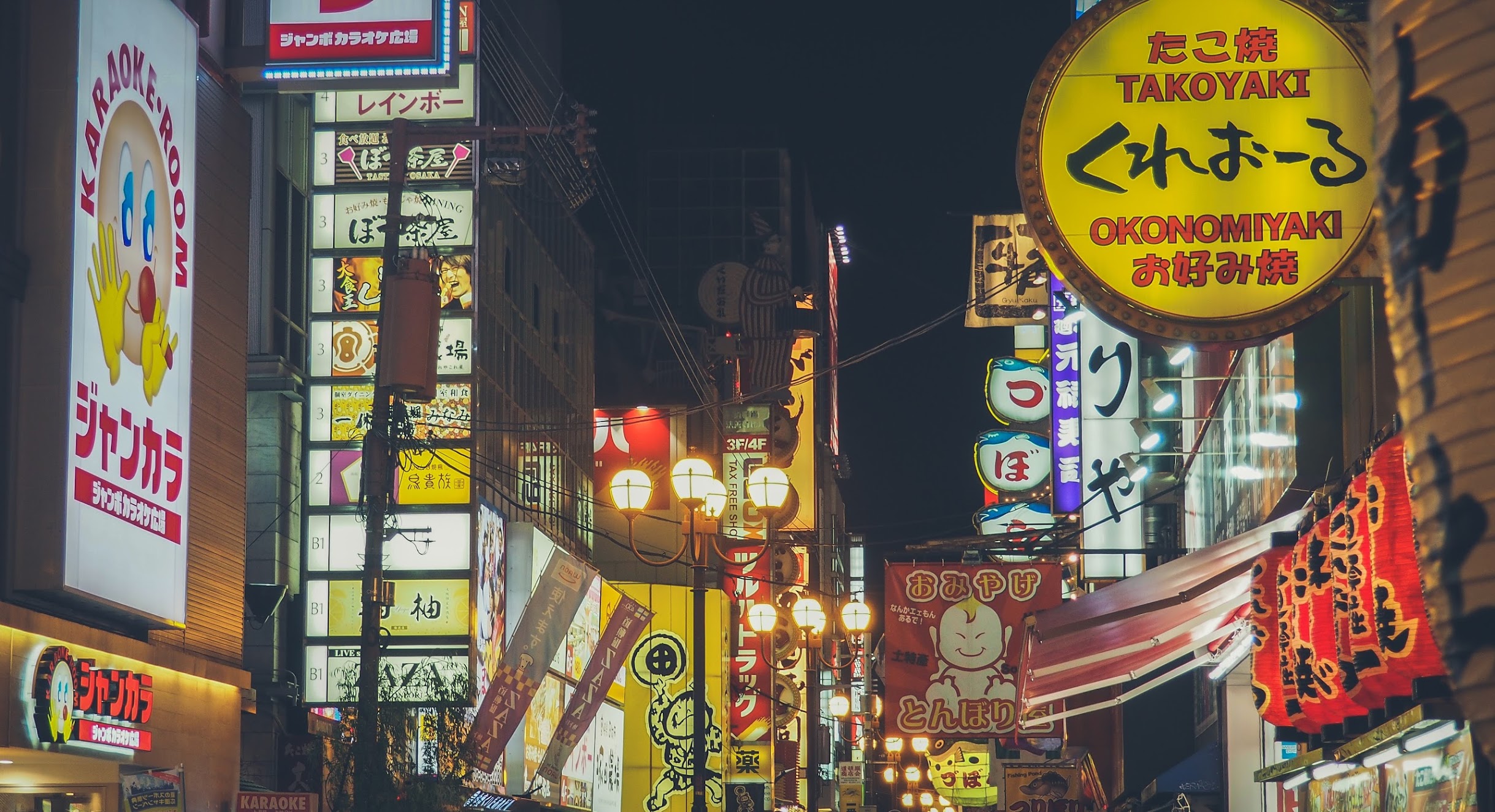 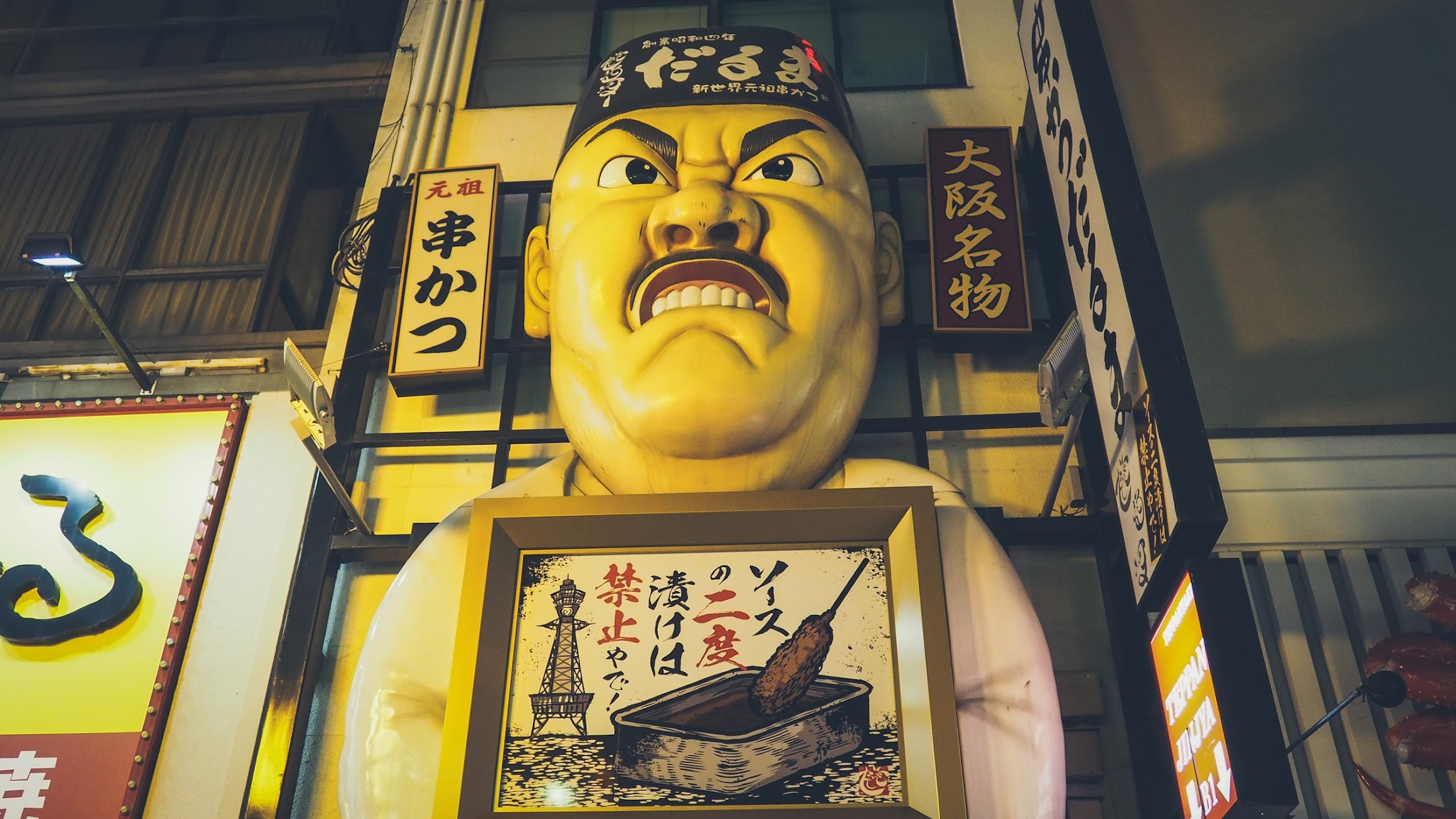 The next morning, before our flights in the afternoon, we went back to Dotonbori to have an early lunch of takoyaki and okonomiyaki, two dishes with deep roots in Osaka. Takoyaki, a savoury ball of octopus and batter, topped with takoyaki sauce, mayonnaise, and dried bonito, got its start in Osaka in the 1930s. Though it’s now sold all over Japan, its true home is here in Kansai, and we needed to pay our respects to this iconic Japanese snack. The takoyaki balls arrived fast and hot, the gooey innards burning our tongues, even as we were processing the flavours of the octopus mixing with the delightfully sharp tones of the takoyaki sauce. Often sold at street-side stalls and food carts, where simplicity and efficiency are as important as flavour, the takoyaki packed a big punch in a modest package. The okonomiyaki, on the other hand, was a thick pile of ingredients – batter, lettuce, cabbage, grated yams, eggs, green onions, meat, and other flavour enhancers – layered and fried and flattened into a pancake-like dish. The finished product was dusted with large handfuls of dried seaweed and bonito flakes, and then topped with okonimiyaki sauce, mayonnaise, and pickled ginger. While there are a variety of okonomiyaki styles throughout Japan, the one that originated in Osaka is the most popular, and any pilgrimage to the nation’s kitchen, as Osaka is sometimes known, is incomplete without at least trying it. 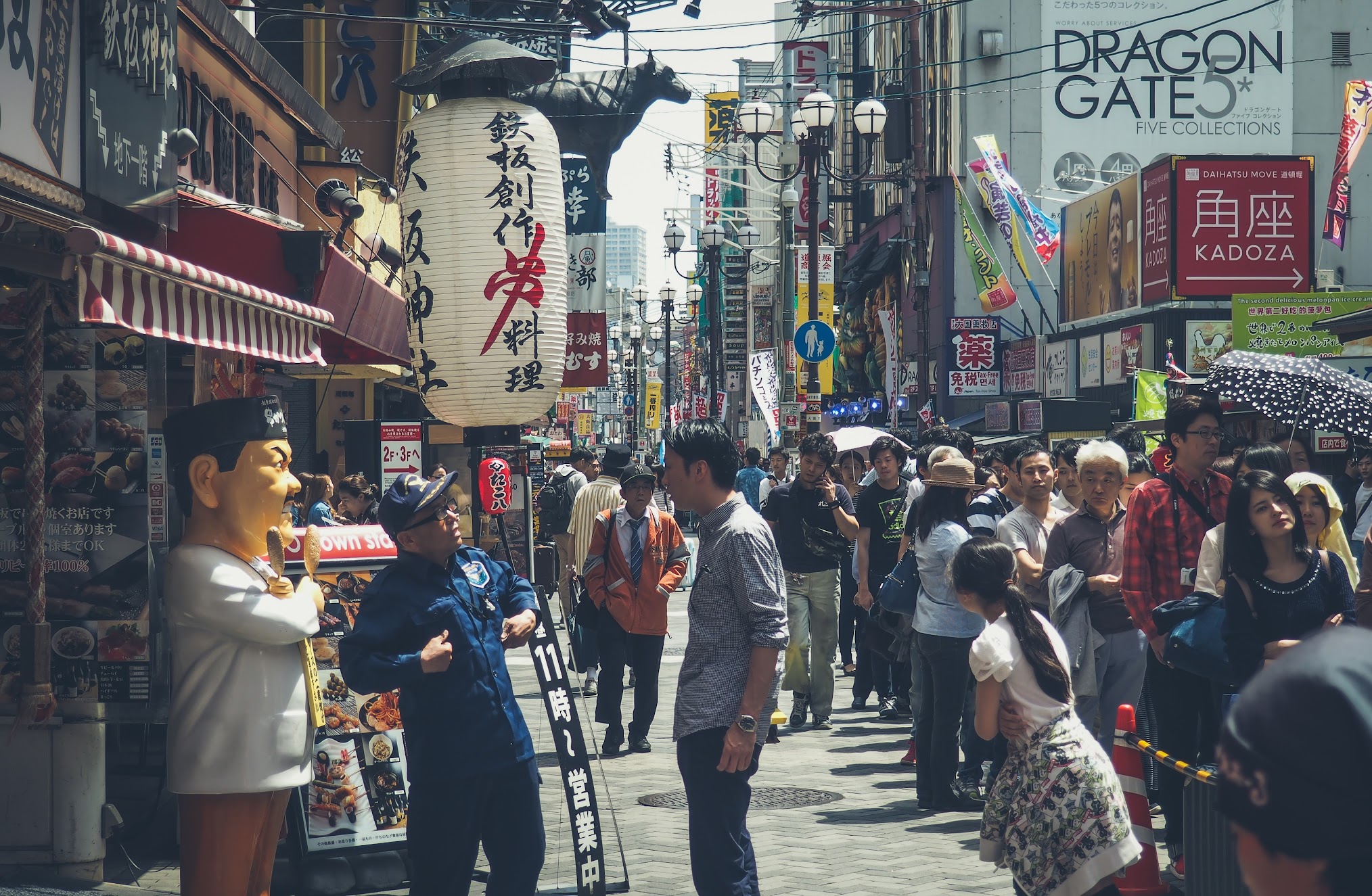 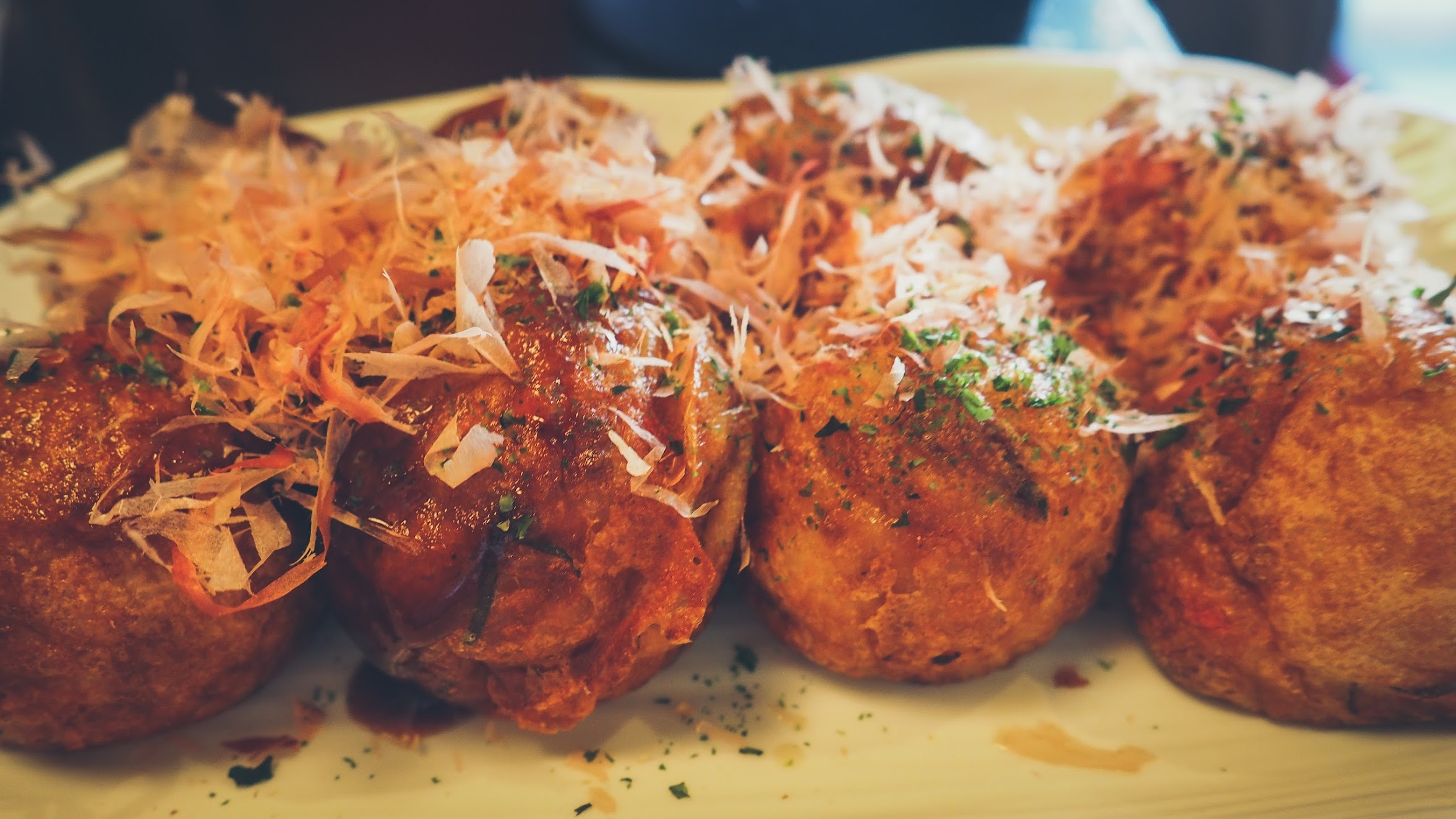 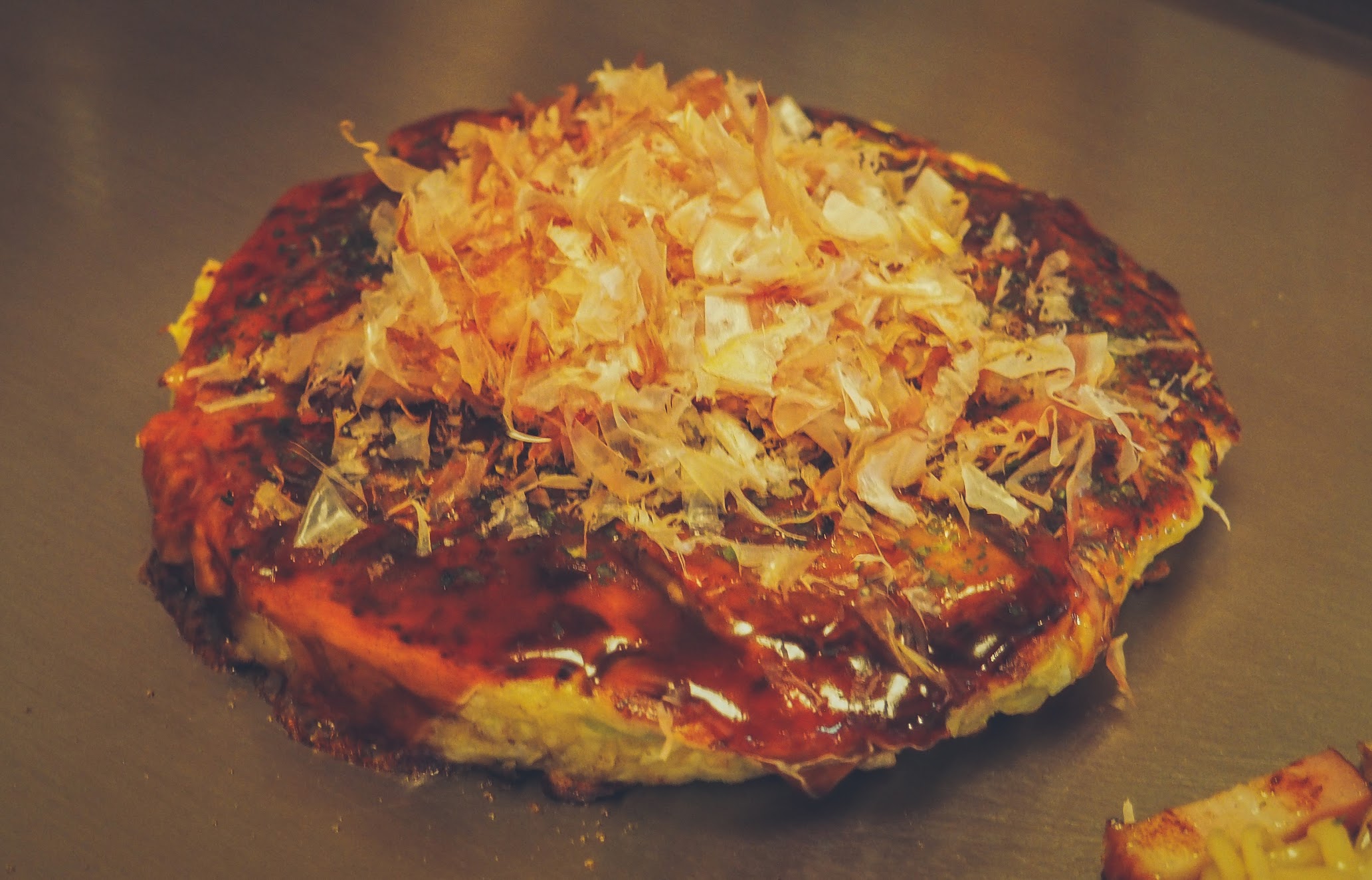 After lunch, we said our goodbyes to Joe and Joanne, as their flight back to Shanghai was a few hours earlier than our return flight to Hong Kong. Ashley’s parents would be staying behind in Osaka an extra few days, so they decided to go back to the hotel and rest, while we continued to explore the second city. One neighbourhood that had caught my eye while I was reading about Osaka was a placed called Orange Street, not too far from our hotel. It’s a bit of an artsy neighbourhood, full of creative design and fashion shops along a quiet road, as well as inviting cafes and coffee counters on every block. I’m not one to appreciate design, but I do like the sort of environment and vibe that a creative critical mass can engender, and I definitely like cool coffee spaces. The muted street scenes were also a nice change of pace from the sea of people around the Dotonbori area, and we took our time walking from door to door. We eventually found a rooftop cafe above one of the design shops, and we spent the rest of our afternoon sipping our drinks underneath a giant umbrella. 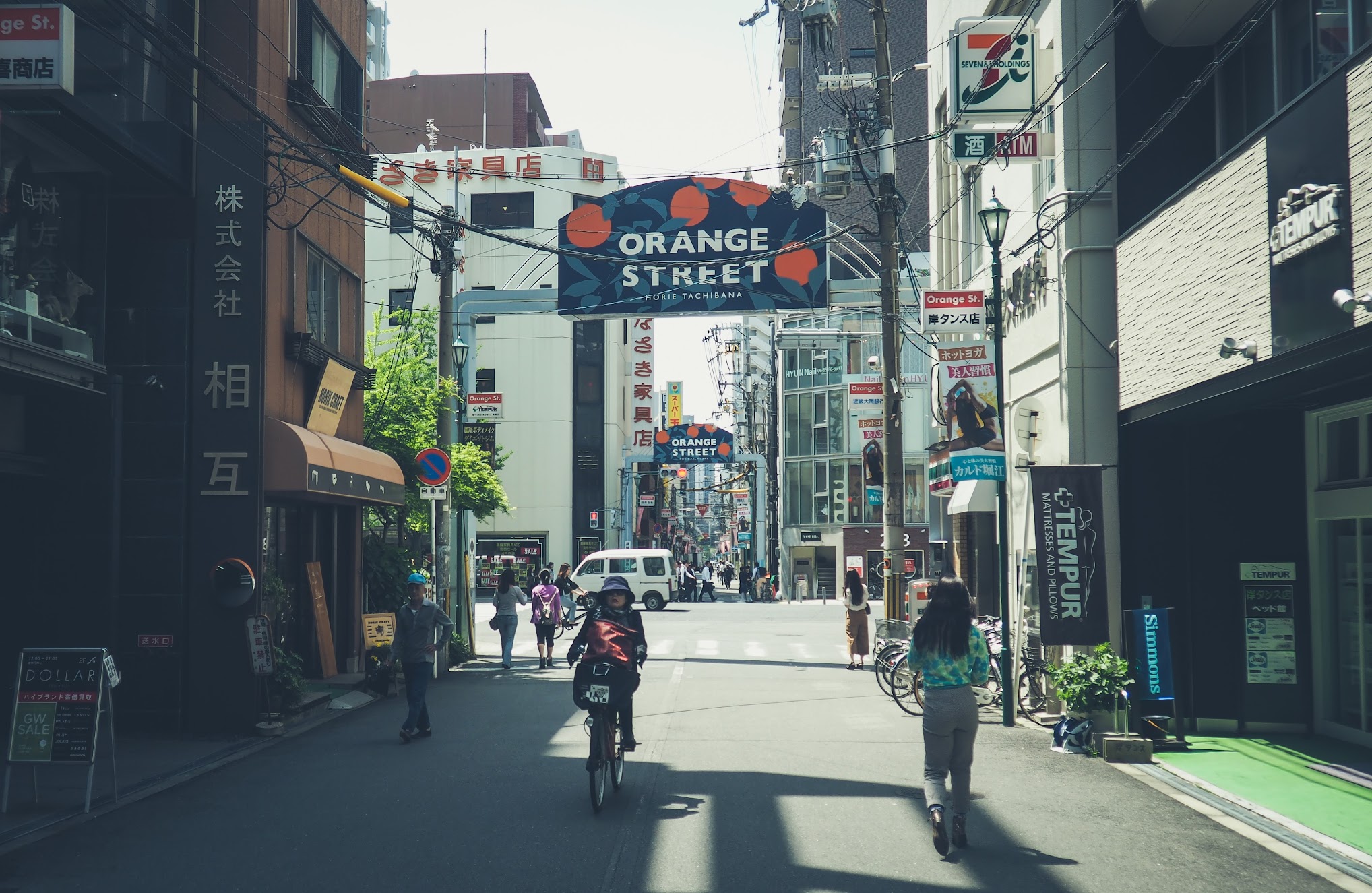 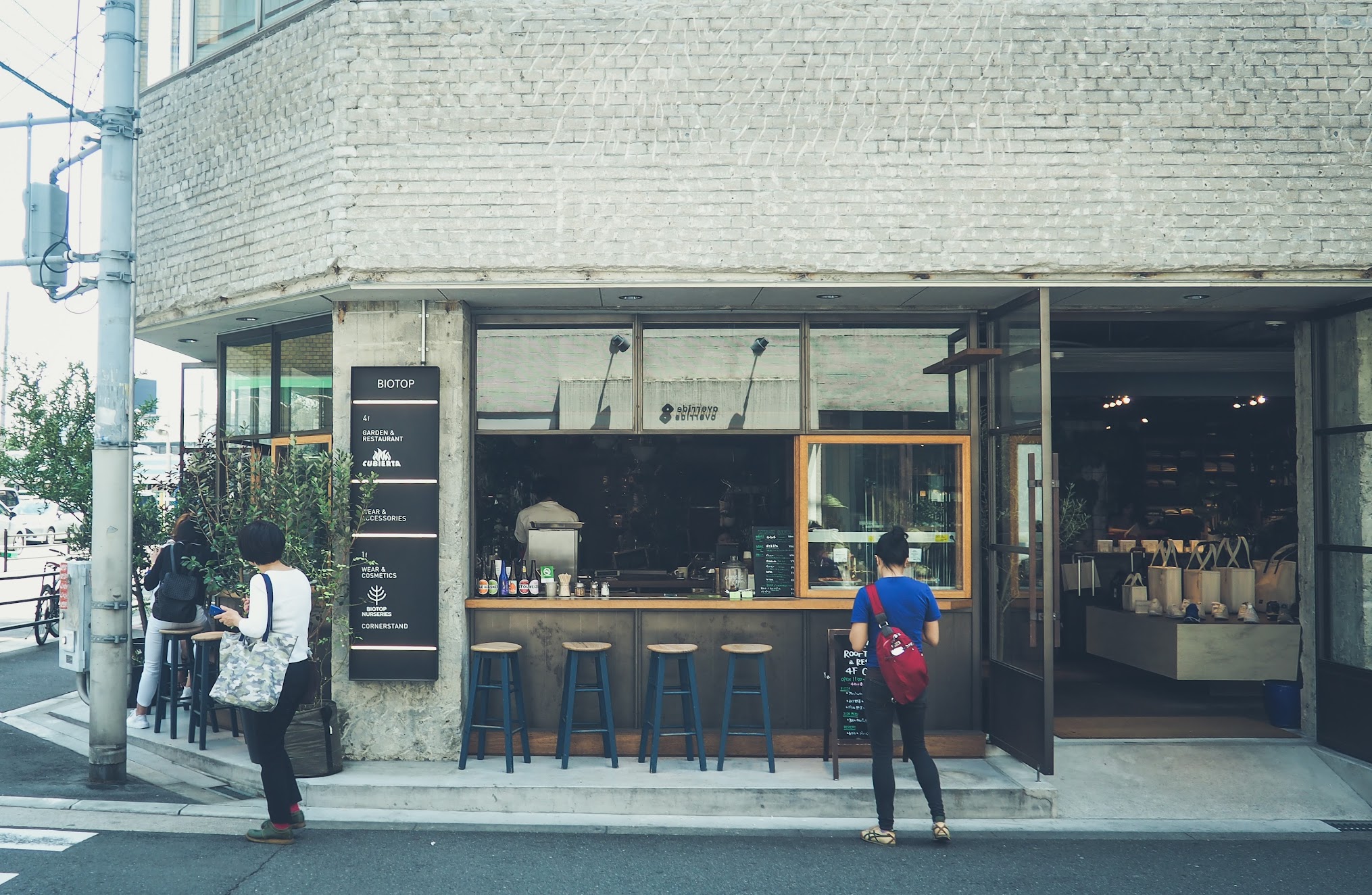 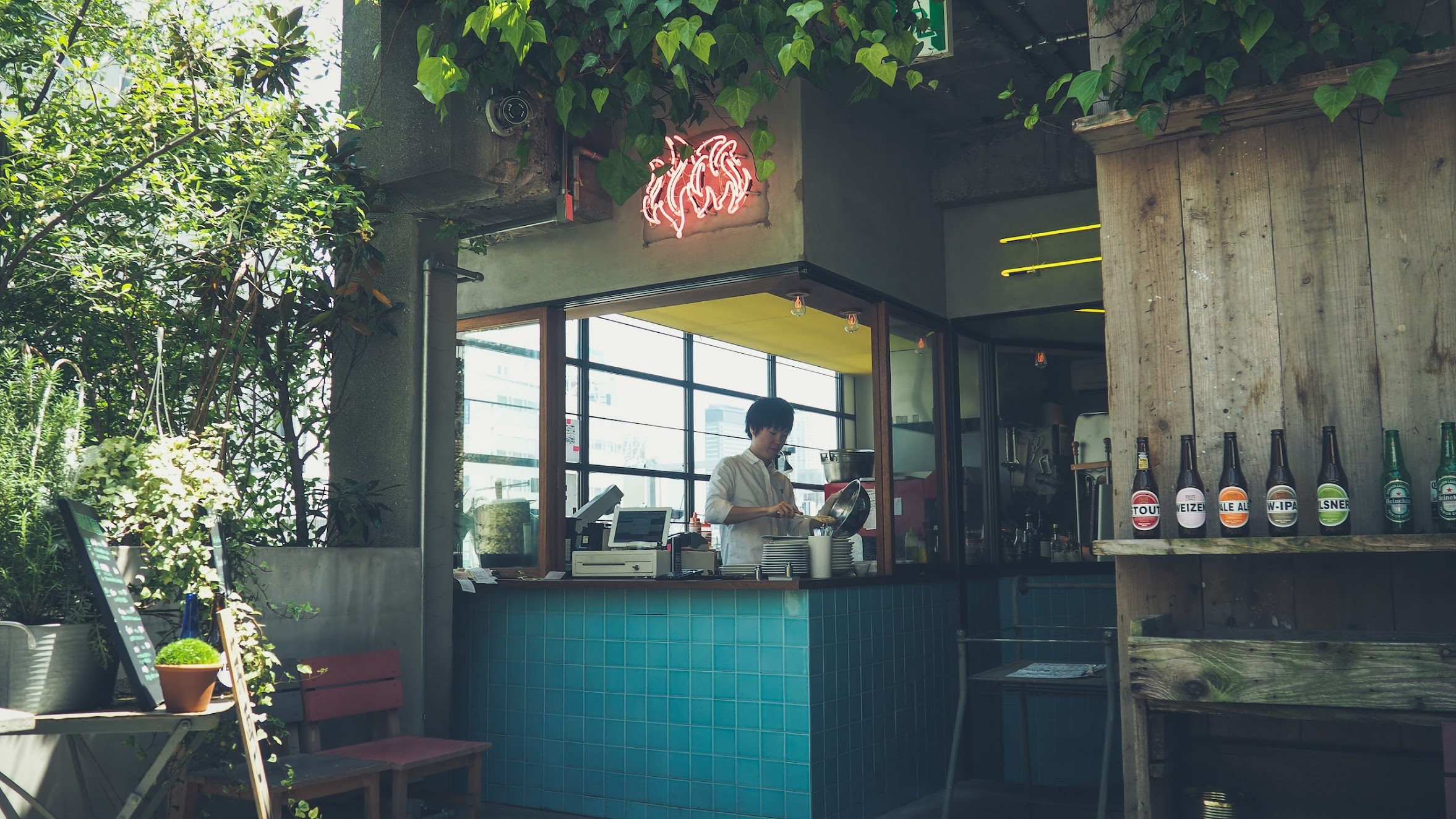 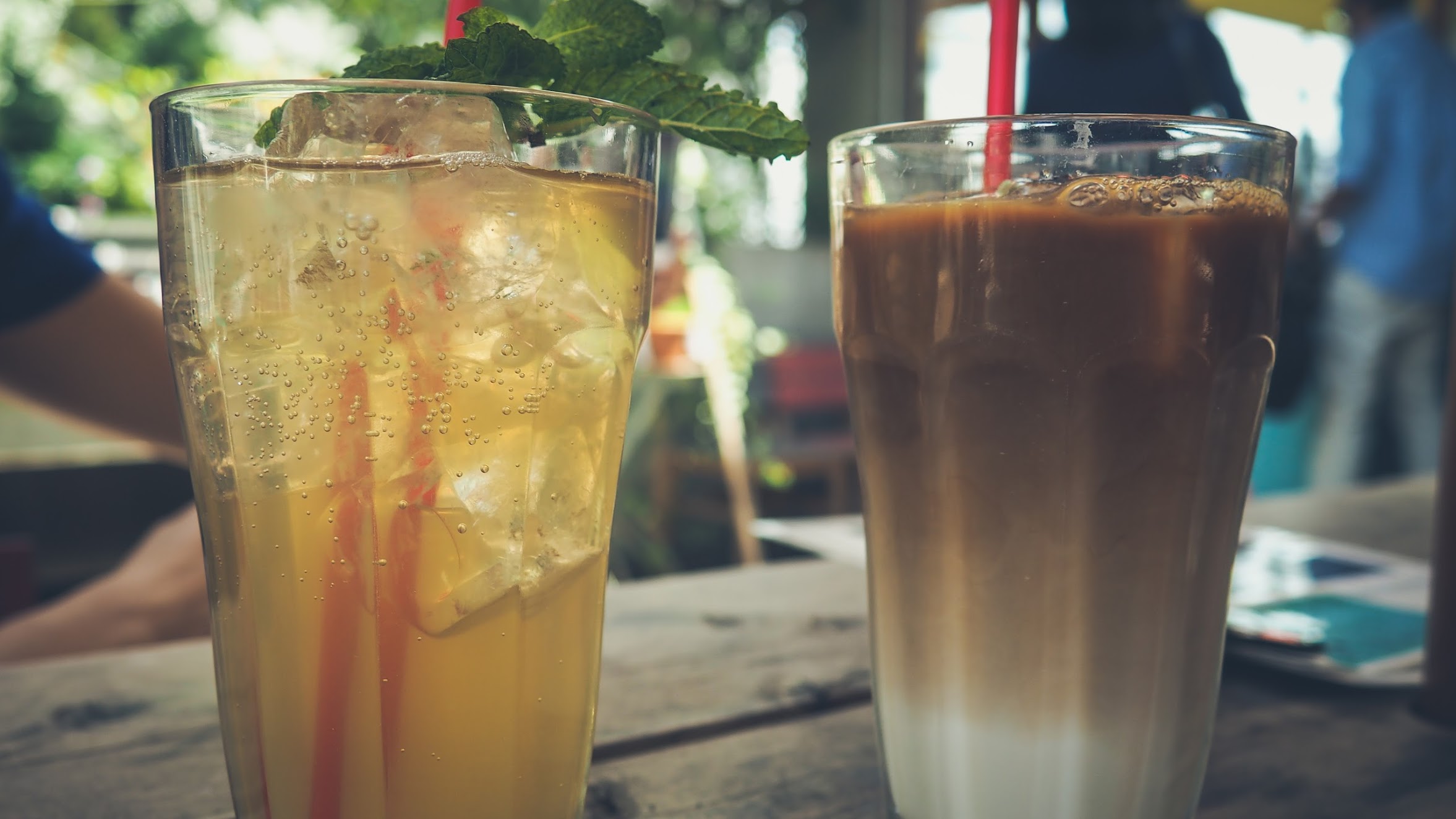 I’m conflicted when it comes to Osaka. Having spent only two half-days in the city, limited to pretty much the Dotonbori and Orange Street districts, I don’t think I can say that I have a very accurate or comprehensive experience of it. There are plenty of other districts and attractions that I would have gladly ventured out to if I had had more time, but I don’t think I would necessarily prioritize a return trip either. Japan is such a rich travel vein to tap, and it seems almost a waste to return to the same location twice. From what I experienced of it, I think Osaka and I would get along just fine, but I don’t know if I feel the need to deepen our relationship just yet. Perhaps if I had spent a little more time in it, got a better feel for the city and its streets, or seen more of what it had to offer, I might feel differently. When it comes to Japan, then, Osaka will always be the second city to me as well. 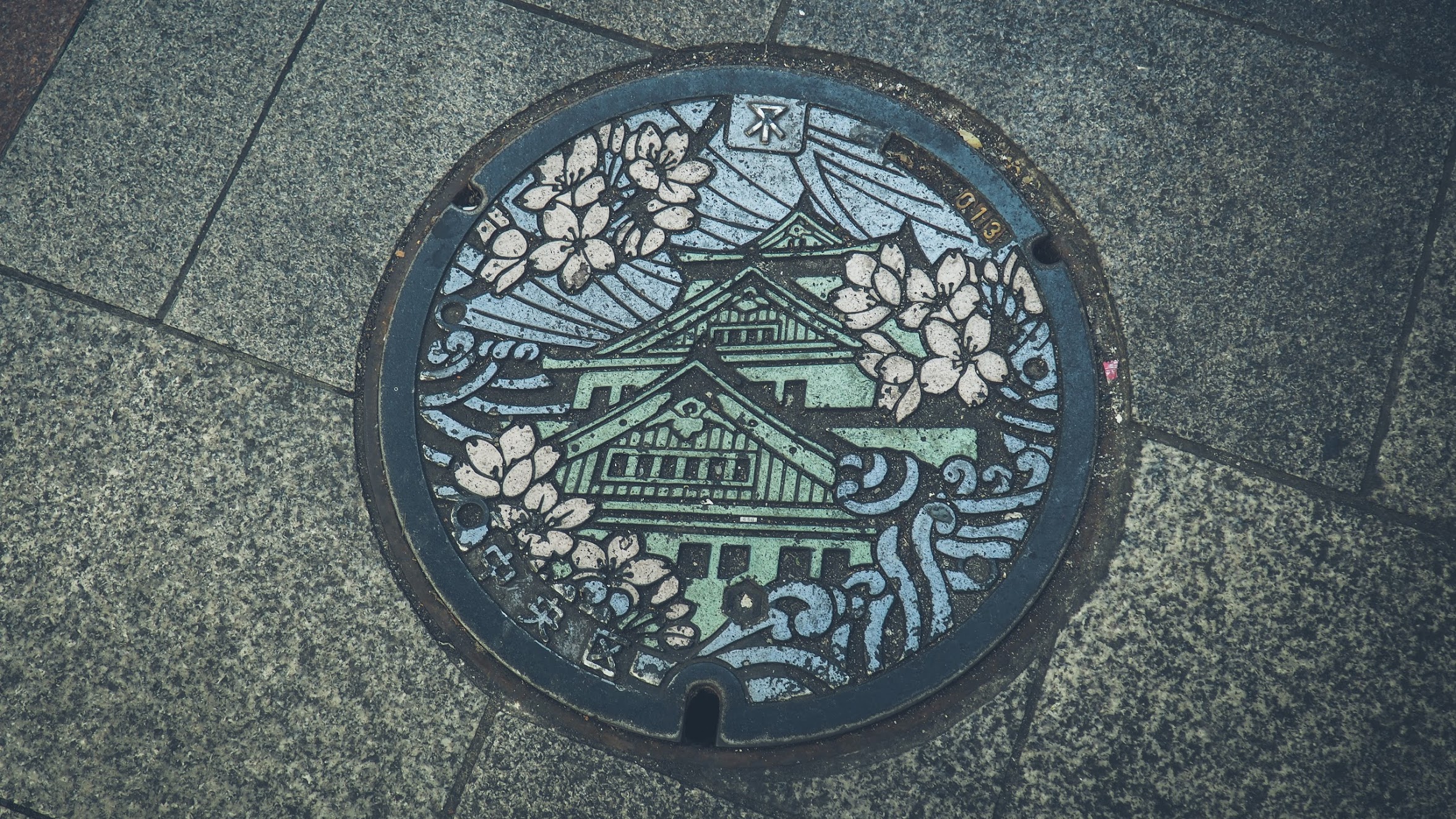