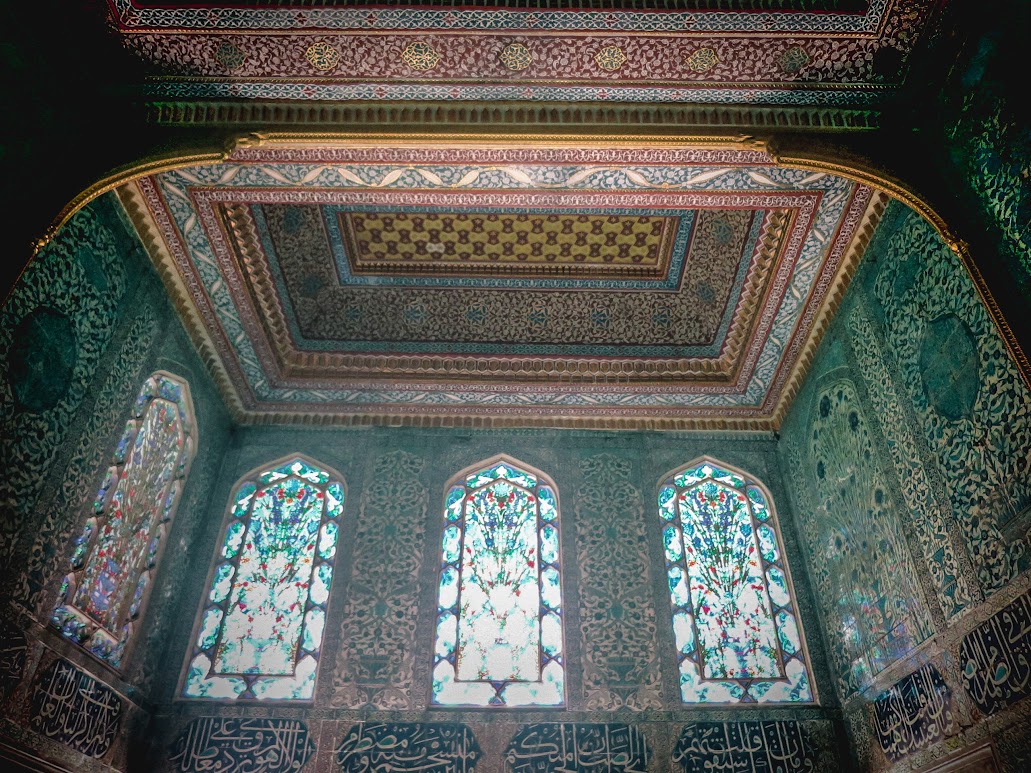 The Palace on the Bosphorus

For nearly 400 years, soon after the conquest of Constantinople, starting with Mehmed II, the all-powerful Ottoman sultans ruled from the private courtyards and pavilions of the Topkapı Palace. Constructed on a hill overlooking the surrounding bodies of water, including the Golden Horn, the Bosphorus, and the Sea of Marmara, the grand palace complex was a reflection of the glory, might, and wealth of the Ottomans. Various sultans made substantial additions and renovations according to their personal whims, most notably Suleiman the Magnificent, but the general layout of the palace grounds was maintained throughout. The four courtyards making up the complex, as well as the Harem, were each more private and secluded than the next, and access into the hidden worlds within was heavily restricted. 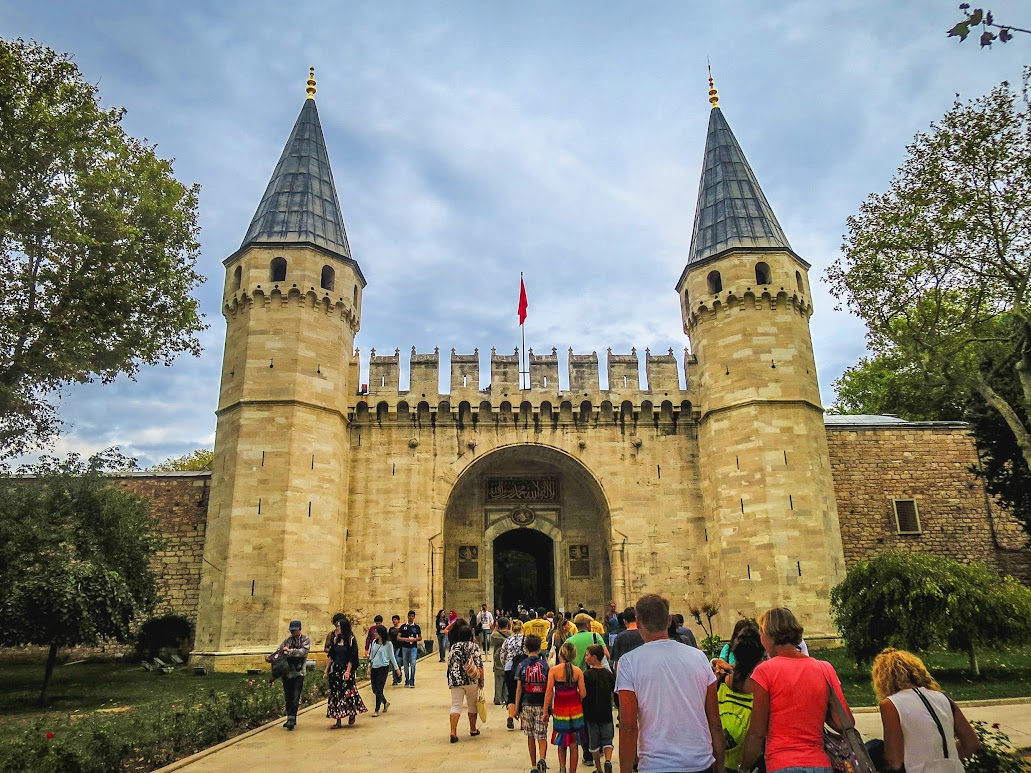 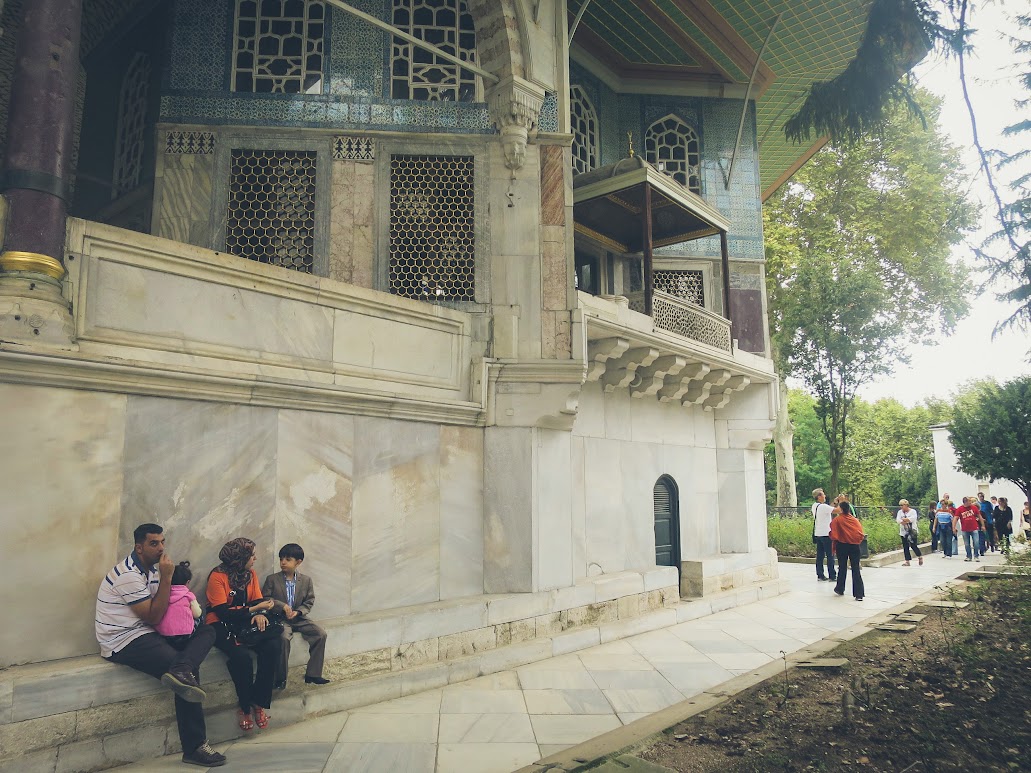 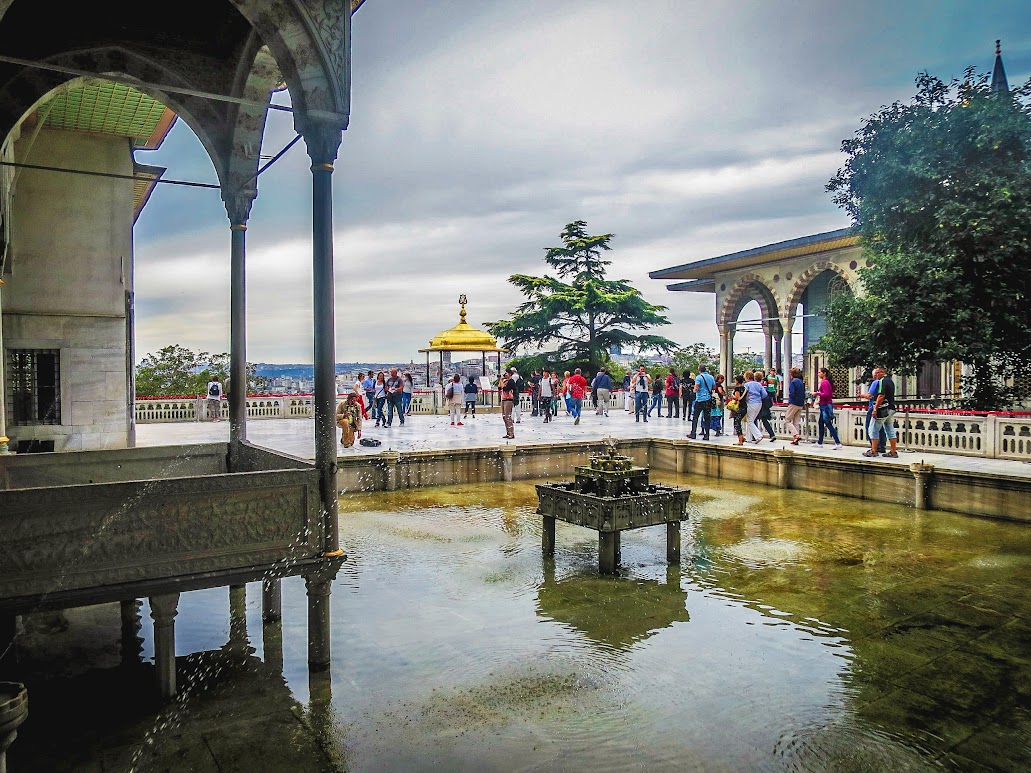 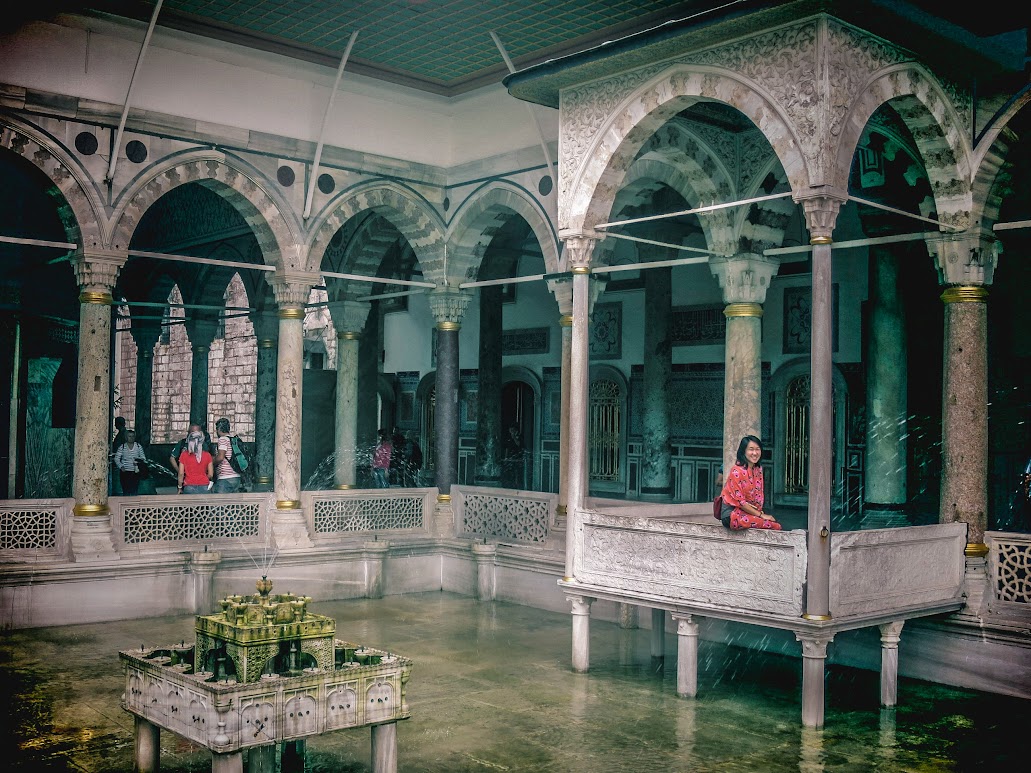 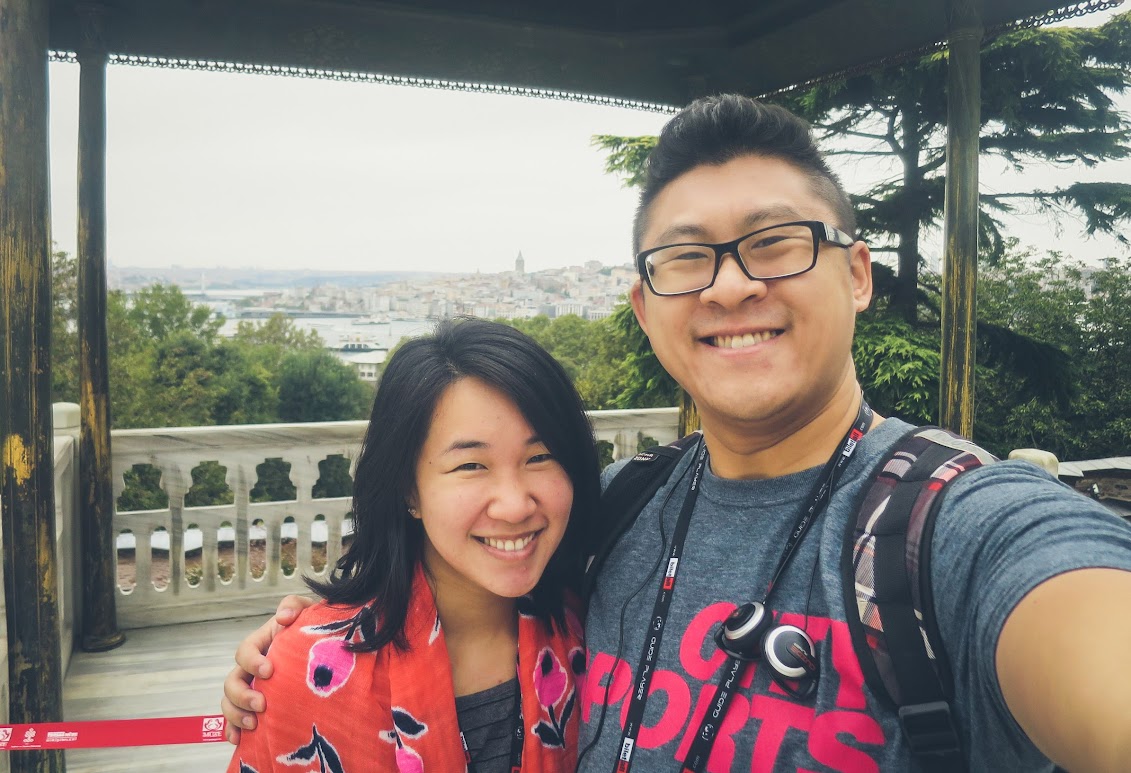 City Within a City

Behind its outer walls, the palace served as a city within a city, boasting an independent water supply, schools, libraries, mosques, and gardens to entertain and sustain the daily lives of its royal inhabitants. The largest kitchens in the entire Ottoman Empire stretched along one side of the Second Courtyard, staffed by 800 to 1000 cooks and servants in its heyday, and capable of producing over 6000 meals a day. The kitchen operations were so massive that it had its own dormitories, baths, and even a mosque set aside for those dedicated to the culinary needs of the palace. Elsewhere in the Second Courtyard, the leading viziers and state officials would meet in the mornings to discuss the affairs of the empire in the Imperial Council, before submitting their reports to the sultan himself. In the afternoons, the sultan would open the floor to hearings from the citizens of the empire, and audiences would be granted to foreign dignitaries and ambassadors, often accompanied by lavish ceremonies and banquets. Underneath all the pomp and circumstance, unseen and unheard, though absolutely essential to the daily clockwork of palace life, were the hundreds of pages and servants cleaning, preparing, waiting, and serving, ensuring that each new day in the lonely compound on the hill passed as easily and forgettably as the last. For the first several centuries of Ottoman rule from The City, these were the unchanging details of life in the palace. 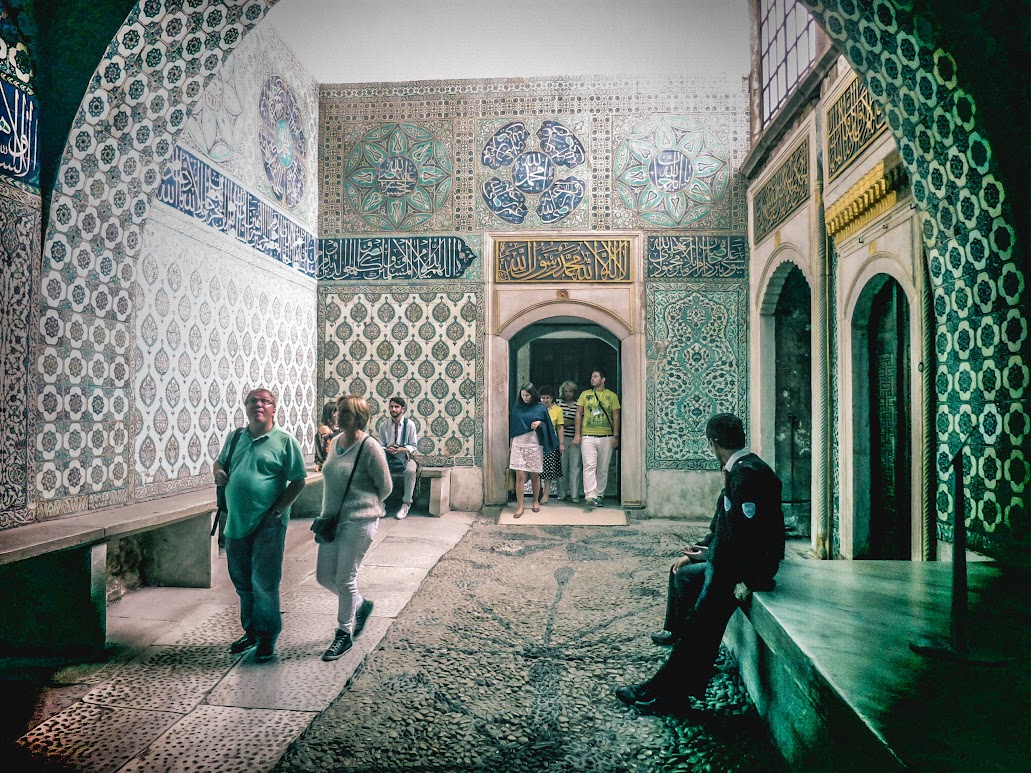 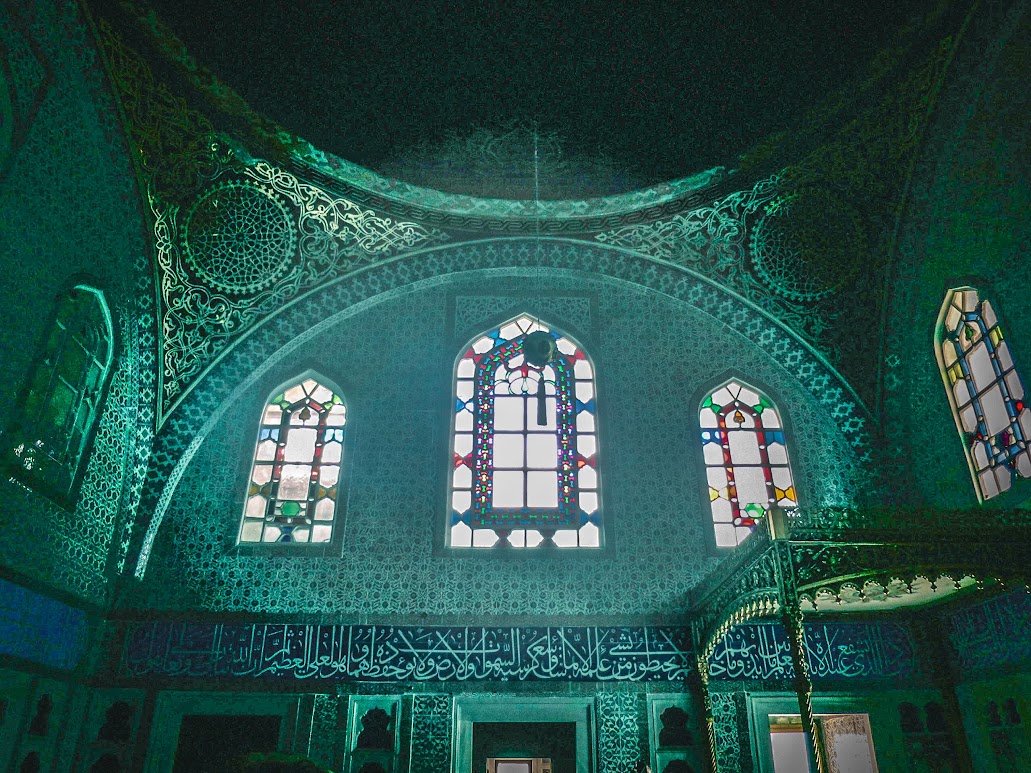 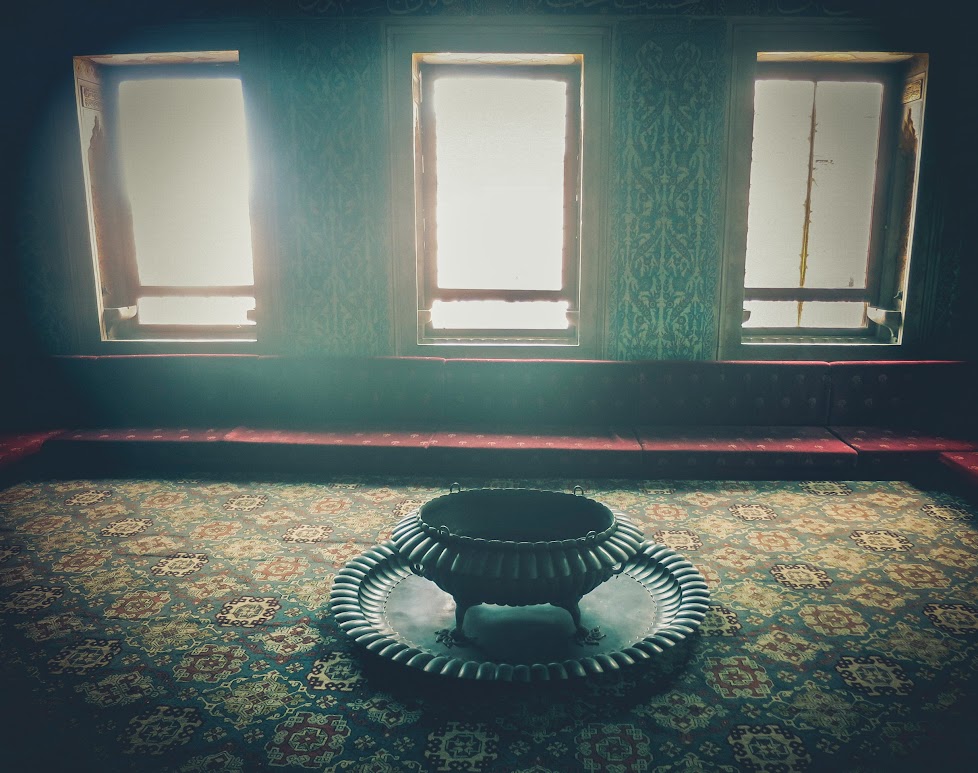 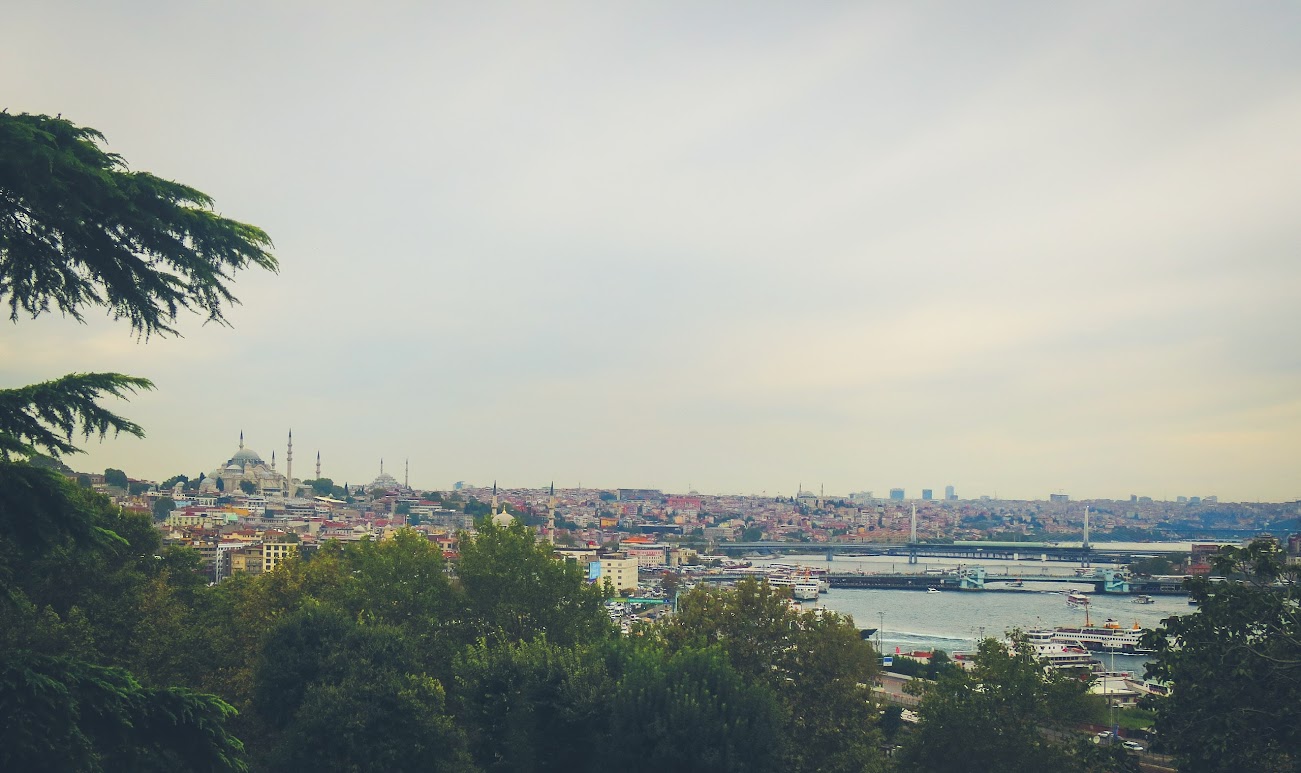 The western wing of the Topkapı Palace complex was occupied by the private apartments of the sultan, as well as the quarters of the infamous Imperial Harem. Here, in the hundred or so rooms kept hidden from all but the most privileged in the empire, the mother of the sultan, known as the Valide Sultan, ruled over the wives, the concubines, the royal princes, and the hundreds of eunuchs guarding and maintaining this most forbidden of spaces. European visitors painted exotic, Orientalist fantasies of life in the Harem, the so-called Golden Cage, feeding into the West’s fascination with the mysteries of the East. However, it was the Ottomans’ growing interest in the West, particularly its culture and architecture, that spelled the end for Topkapı Palace. In 1856, Sultan Abdülmecid I moved the royal court, including the Imperial Harem, to the newly constructed, and thoroughly European, Dolmabahçe Palace, north of the Golden Horn. The faded glories and outdated Ottoman decor of Topkapı Palace were left to slowly expire on the shores of the Bosphorus, until the Turkish Republic mercifully converted the grounds into a museum in 1924. 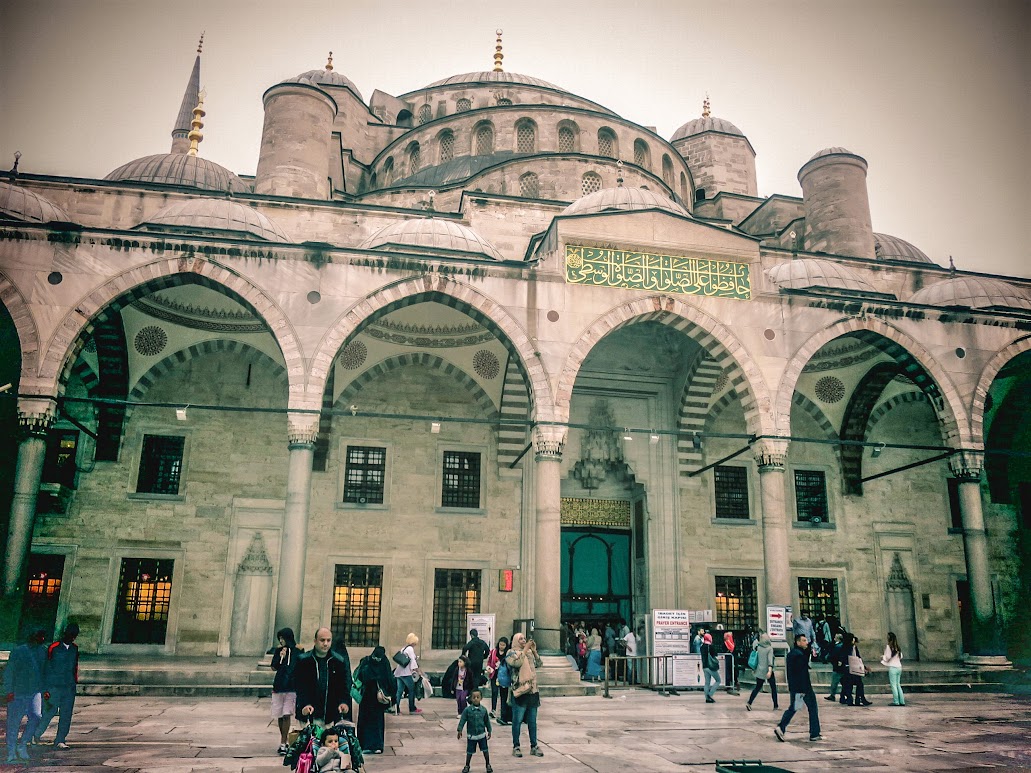 After spending the afternoon walking around Topkapı Palace, Ashley and I circled around and came back to Sultanahmet Park, where our day had begun. The Sultan Ahmed Mosque, with its inviting minarets, gave us our first glimpse of old Istanbul that morning, and it would be our last stop that afternoon. Built by Sultan Ahmed I in the early years of the 17th century, its monumental design and exquisite interior were intended to emphasize Ottoman wealth and power during a time when the empire was negotiating its transition out of the golden age of the 16th century. After two centuries of rapid and nearly unchecked expansion, the seemingly invincible Ottoman armies met their match in separate campaigns against the Habsburgs in Hungary and the Safavids in Persia. Controversially, Ahmed I took funds from the Imperial Treasury to pay for the mosque, rather than from the spoils of war, the traditional source of funds for all previous imperial mosques. The new mosque was built across from the Hagia Sofia, dominating the skyline from the south, reassuring the city, and the empire, that perhaps the heyday of the Ottomans was not yet a thing of the past. 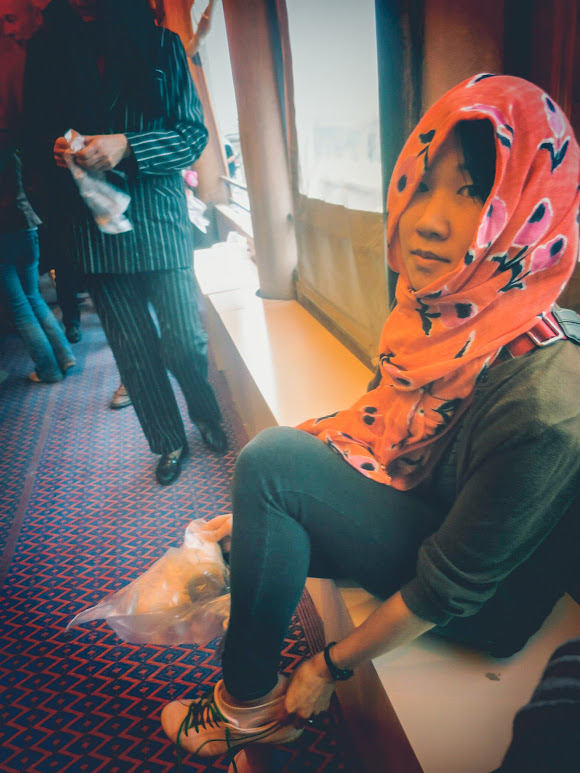 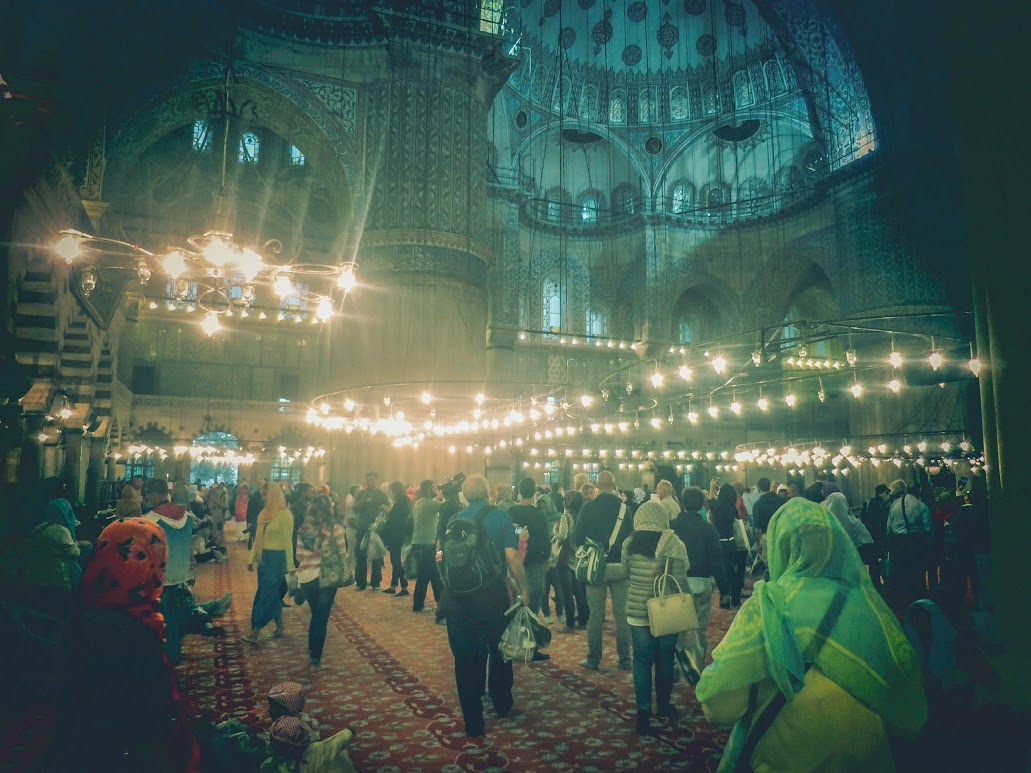 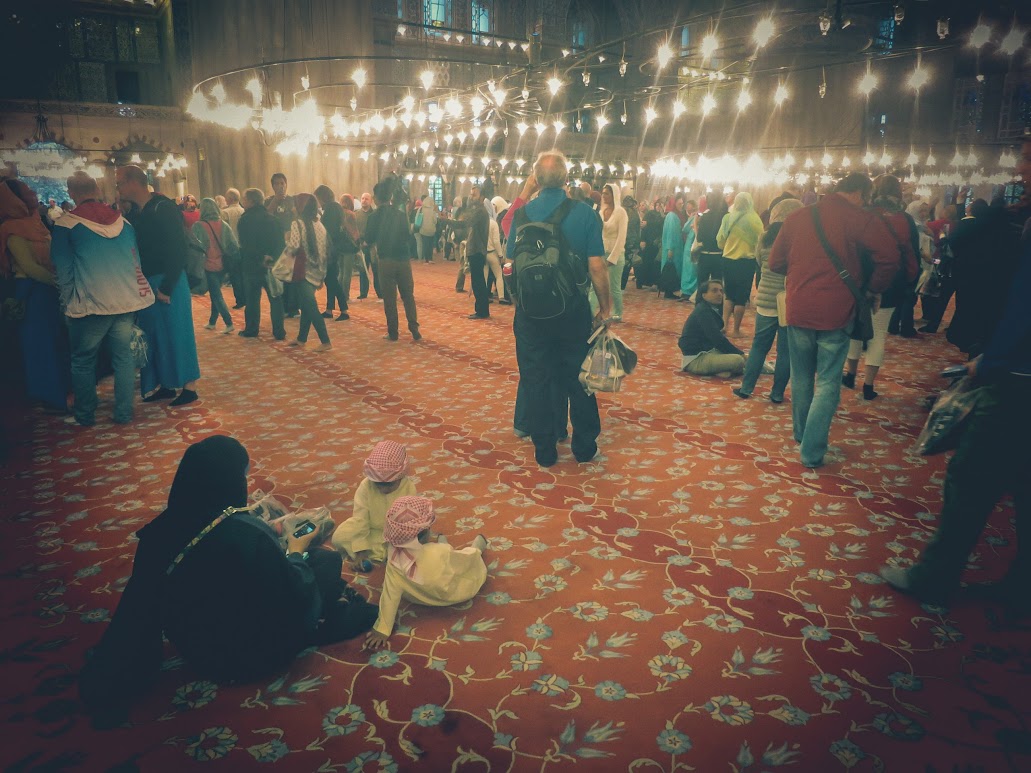 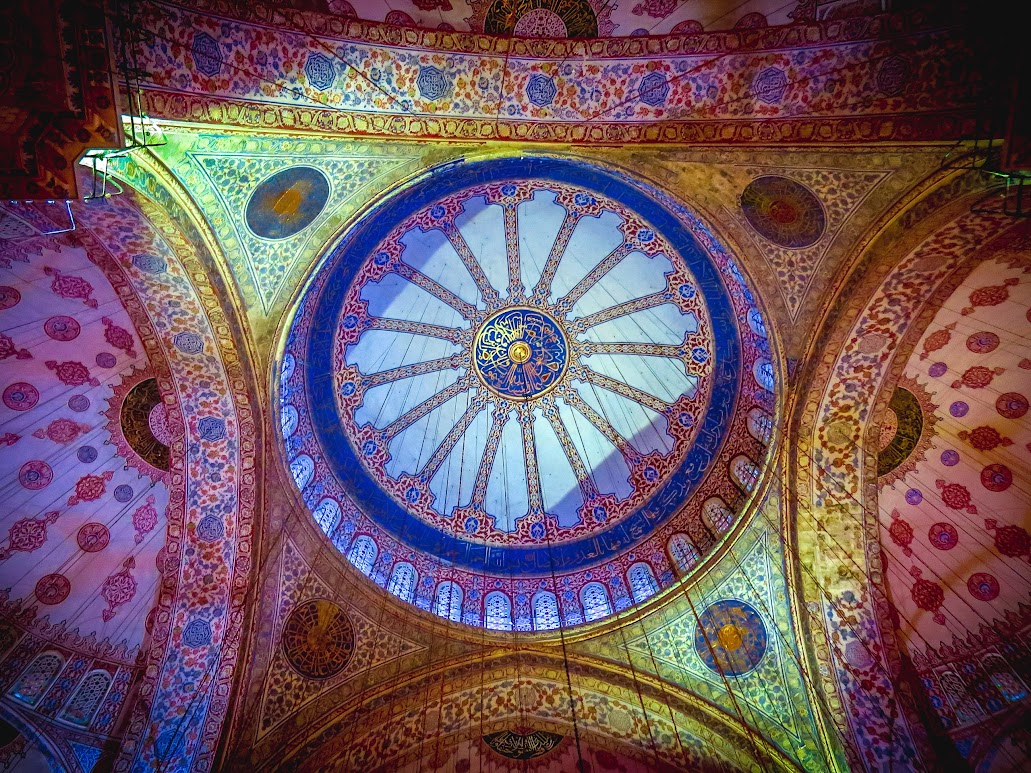 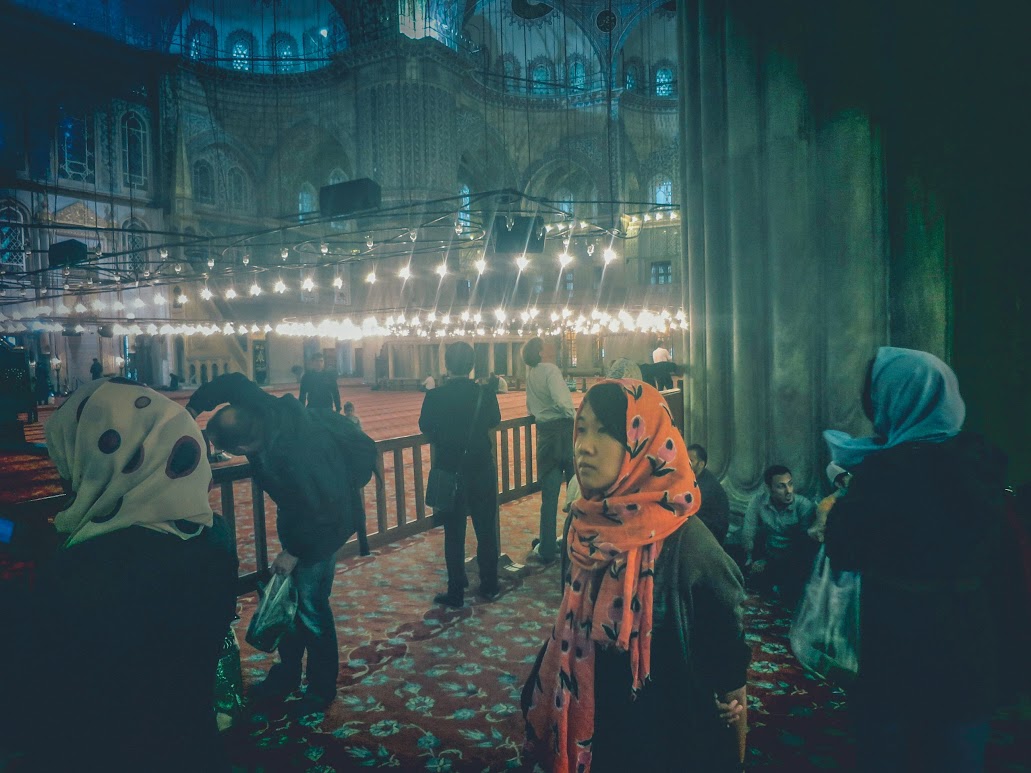 Ashley and I entered the Sultan Ahmed Mosque through a covered walkway off to the side, stopping in a carpeted atrium to remove our shoes. We were joined by a solemn crowd of travellers, and the origins of its other name, the Blue Mosque, became immediately apparent upon entering its sacred spaces. The interior was covered in beautiful blue tiles, reflecting the light of the chandelier fixtures and bathing the upper reaches in a wash of violet, cobalt, and azure. We stood at the back of the mosque, admiring the sights within, and observing the city’s faithful amidst the strangers in their refuge. After the fall of the Ottoman Empire in the early 20th century, much of what represented the might of the empire was stripped of its function and turned into attractions and museums – the Hagia Sofia, the Basilica Cistern, and the Topkapı Palace among them. These monuments to the golden age of Ottoman rule, when it struck fear into the heart of Europe and commanded armies from Tunisia to Vienna, are empty shells of what they used to be, beautiful as they are. Not so with the Sultan Ahmed Mosque. It continues to serve as a place of worship and a spiritual home to the city, much as it has for the last 400 years. In doing so, it is perhaps a stronger link to the old days of Istanbul than any of the empty golden age monuments could ever be. 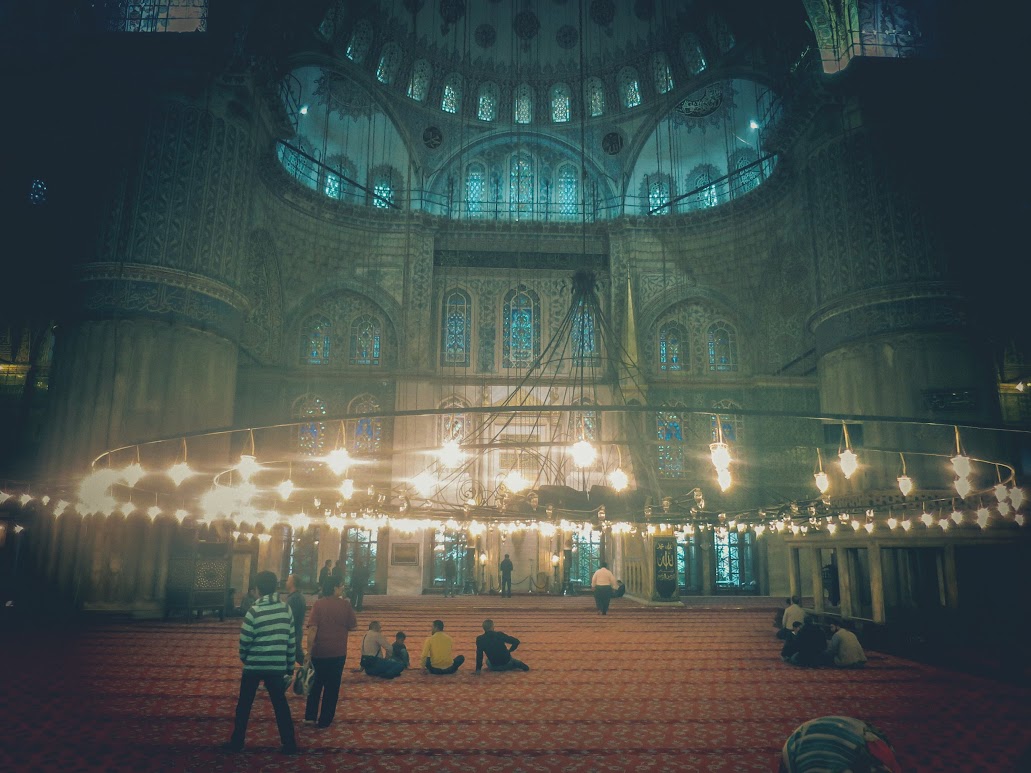