A Morning in Asia

Having spent the previous two days in the historic Fatih district, Ashley and I made our way back to Eminönü the next morning to catch a ferry across the Bosphorus. Istanbul’s fortuitous location, straddling one of the great trade and migration routes between Europe and Asia, defines so much of its identity, and though the townships on the Asian shore weren’t fully incorporated into the city until the 19th century, they nevertheless have been part of the social fabric of the Bosphorus for as long as Istanbul, if not longer. Our plan for the morning was to cross the narrow strait to the Üsküdar district, where we would walk south along the waterfront promenade until we reached the district of Kadıköy. 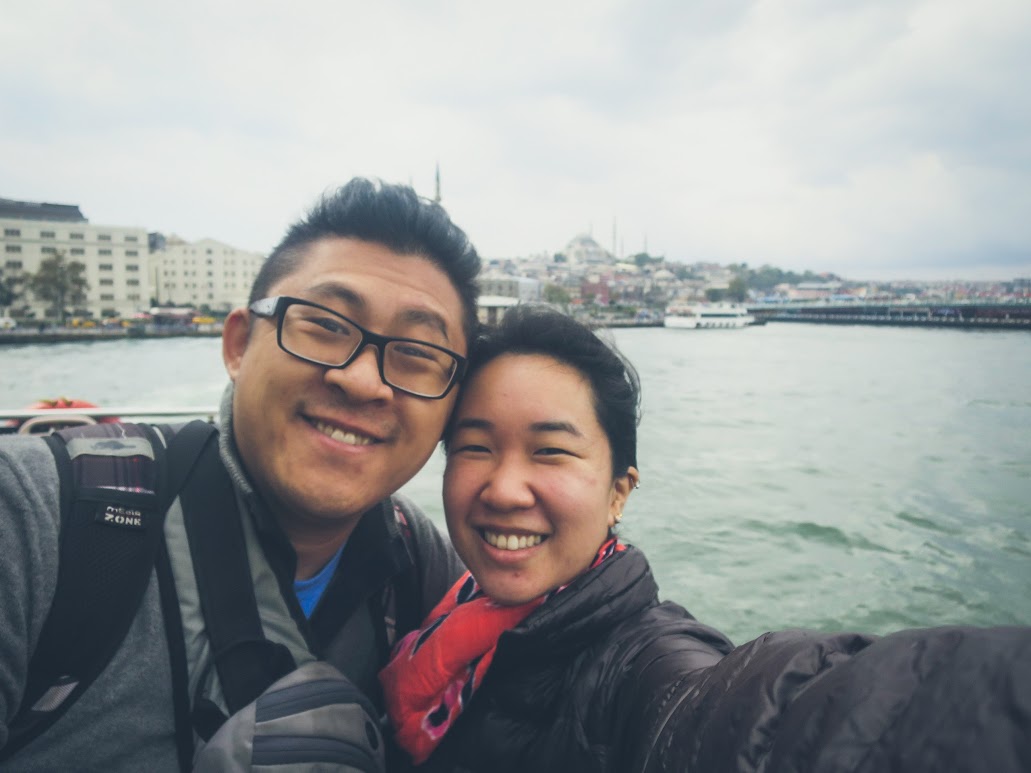 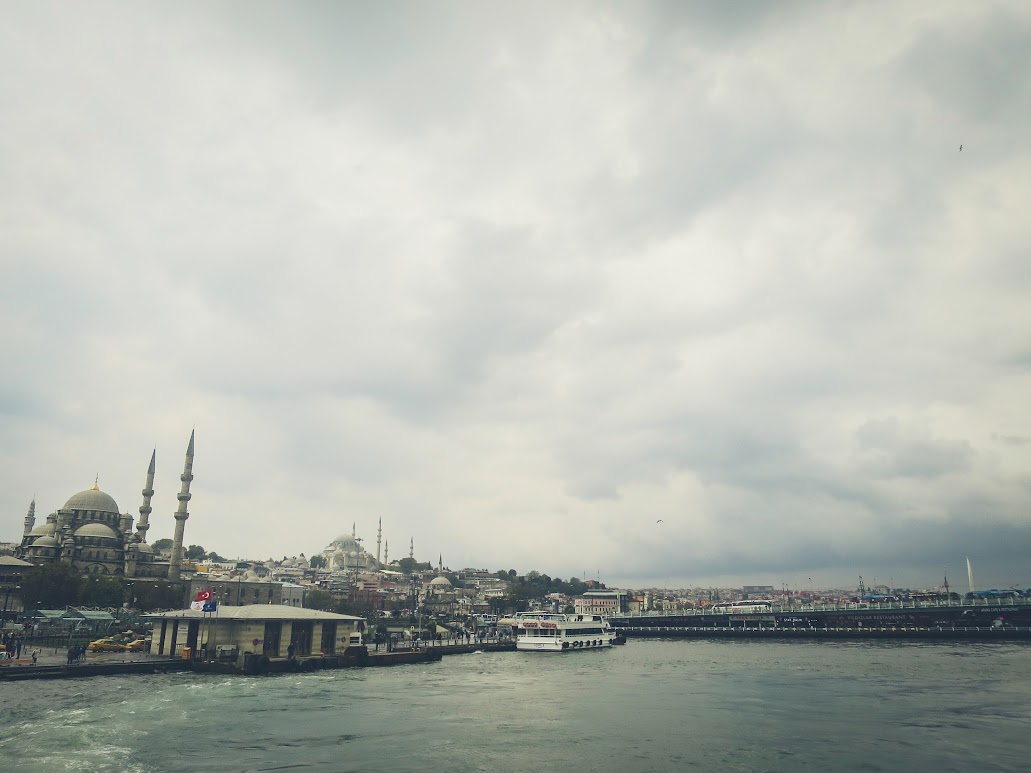 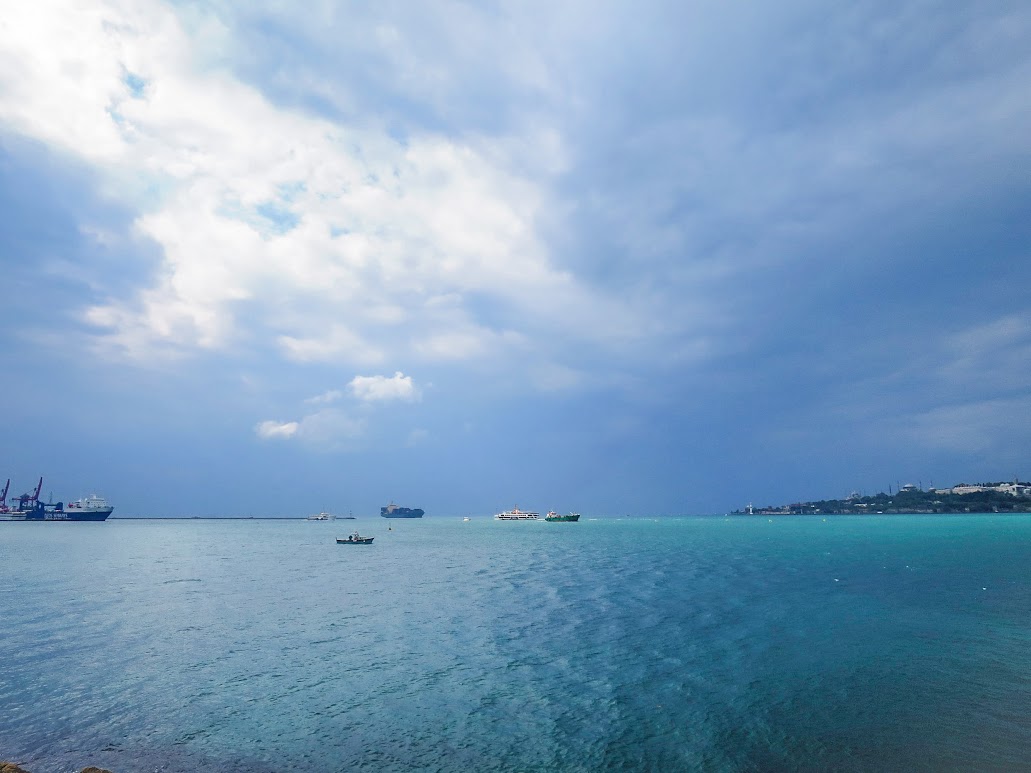 Story of the Bosphorus

As our ferry cut across the slate-blue waters that separate Europe and Asia, the forested, low-lying skyline of the old city, punctuated by the occasional minaret or tiled dome, retreated into the past. The idea of a city divided by water rang familiar to Ashley and I, as so much of our current home, Hong Kong, is defined by its relationship to Victoria Harbour, the deep channel that flows between the Kowloon Peninsula and Hong Kong Island. The relationship between Istanbul and the Bosphorus is multifaceted, as befitting its unique geography and long history. It is at once a defensive feature, being one of the bodies of water that surrounds and protects the old city on three sides, and a productive one, linking the Mediterranean with the Black Sea world. In the sweltering Istanbul summers, the cool waters are a welcome reprieve, and though it cuts through the heart of the modern city, it unites Istanbullus with an unspoken longing to be near its shores. We made good time that morning, and the docks on the Asian side gradually came into view. Before we knew it, we were disembarking onto the wet sidewalks of Üsküdar. 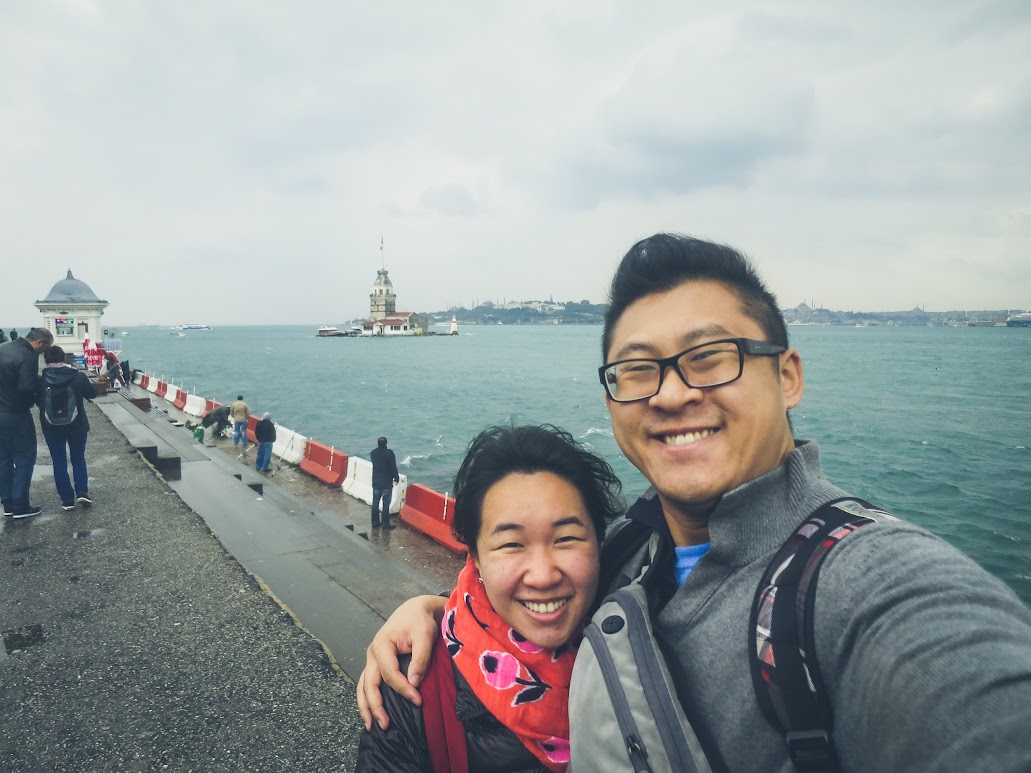 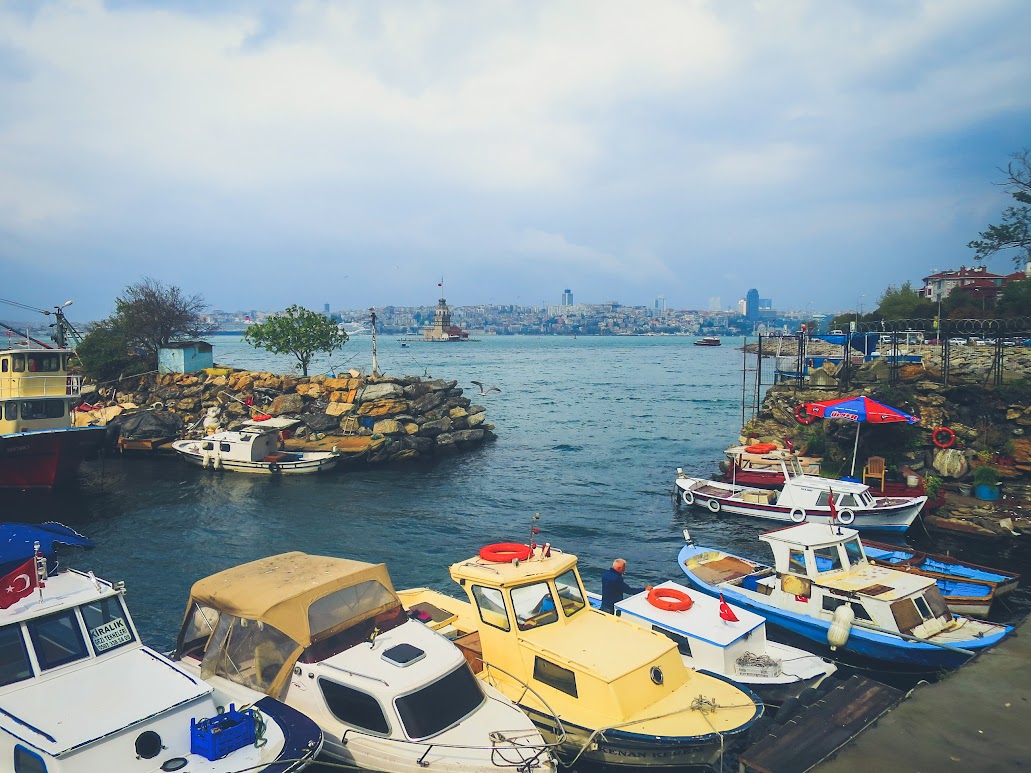 Ancient Üsküdar was one of three prominent settlements that guarded the passageway between the Sea of Marmara and the Black Sea during the days of the Classical Greeks and Romans. The other two settlements were Byzantium on the European side, which became Istanbul, and Chalcedon, now the Asian district of Kadıköy. Throughout the years, numerous invaders have used the two Asian settlements as staging points for attacks on the walled city across the water, including the Persians, the Arabs, Western crusaders, and the Ottomans. Nowadays, Üsküdar is largely residential, filled with sleepy neighbourhoods, schools, and shopping centres, but it boasts a popular waterfront area with a long promenade that hugs the shoreline. We took our time walking along the Bosphorus that morning, taking in the different views of the city from across the strait. The morning had started out with a spot of rain, but it had stopped by the time we reached Üsküdar, and the remains of the cloud cover filtered the warm sunlight through its blue-grey patches. 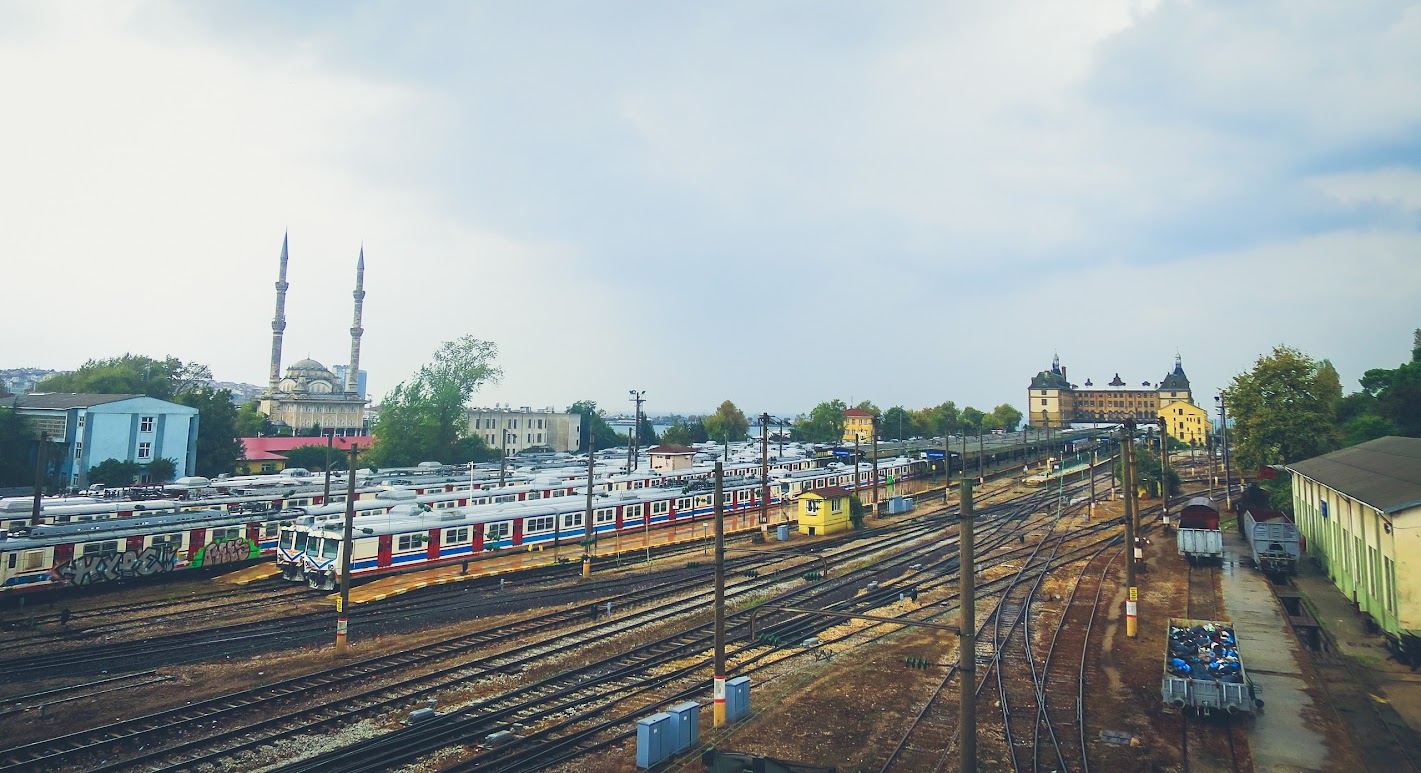 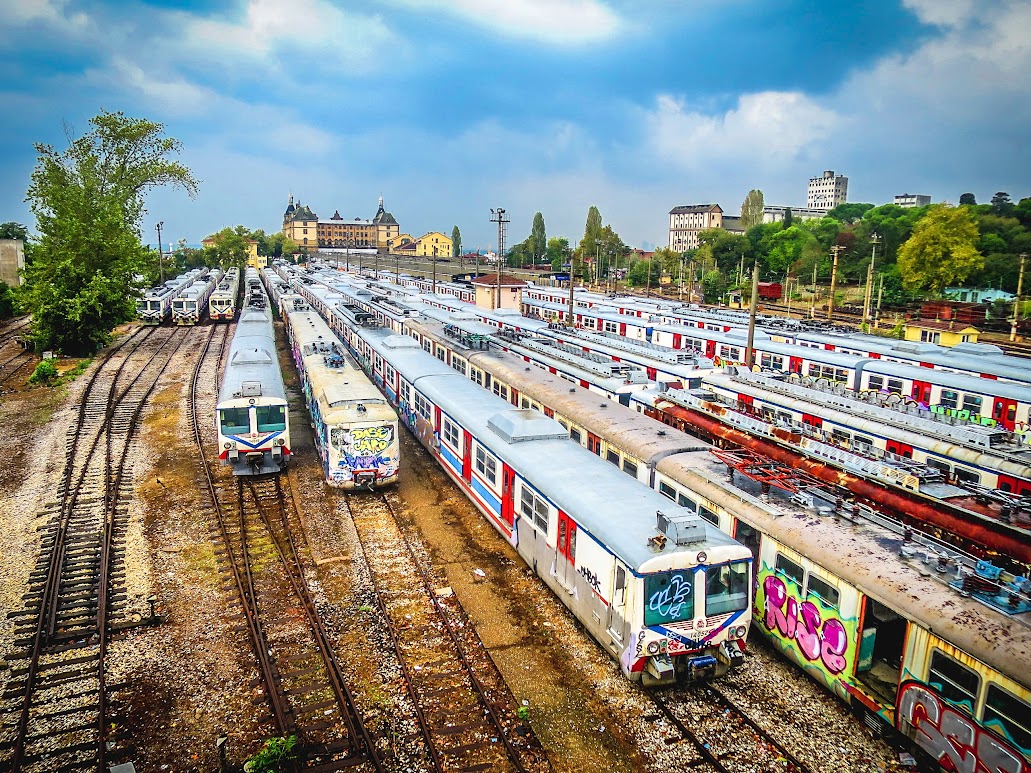 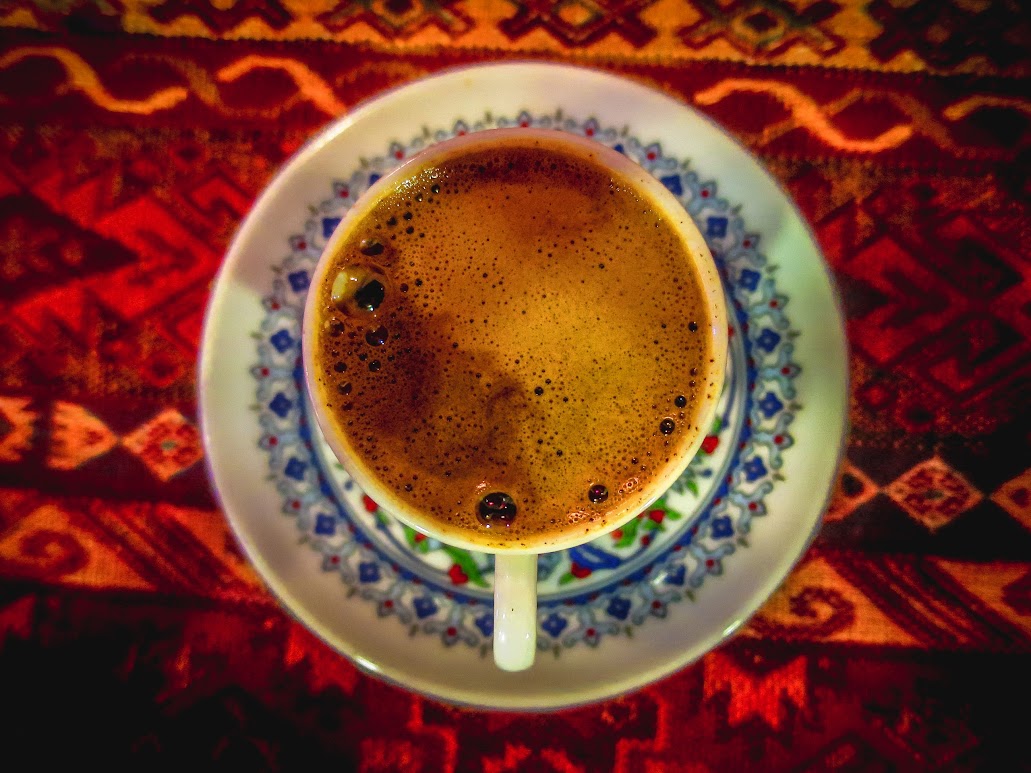 The promenade came to an abrupt end at a commercial cargo port, and, after hastily consulting a flimsy tourist map, we pivoted inland and into the residential streets of Asian Istanbul. Our goal was to cut through the neighbourhoods, around the wide docks that had forced us to take a detour, and make it back to the waterfront where we could continue on our way. After a lot of second-guessing and doubling back on the anonymous roads, we eventually stumbled upon Tibbiye Caddesı, a long, mostly straight, road that would lead us into Kadıköy, passing by beautiful university campuses and the elegant Haydarpaşa Terminal. Opened in 1909 to serve as the western terminus of trains coming in from the Ottoman cities of Baghdad and Medina, it now stands silent and largely unused, and future plans concerning the structure are equal parts rumour and conjecture. The busier commercial streets of the Kadıköy waterfront could be seen just beyond the shuttered station, and we spent some time browsing the seaside shops before grabbing lunch and a strong cup of Turkish coffee. 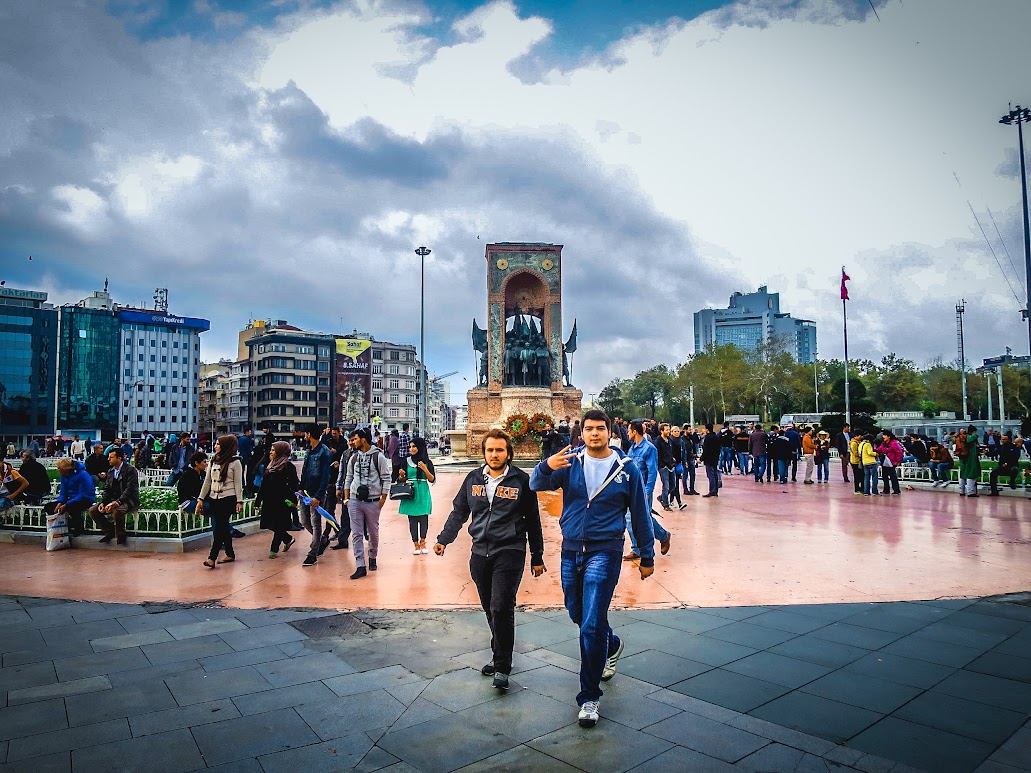 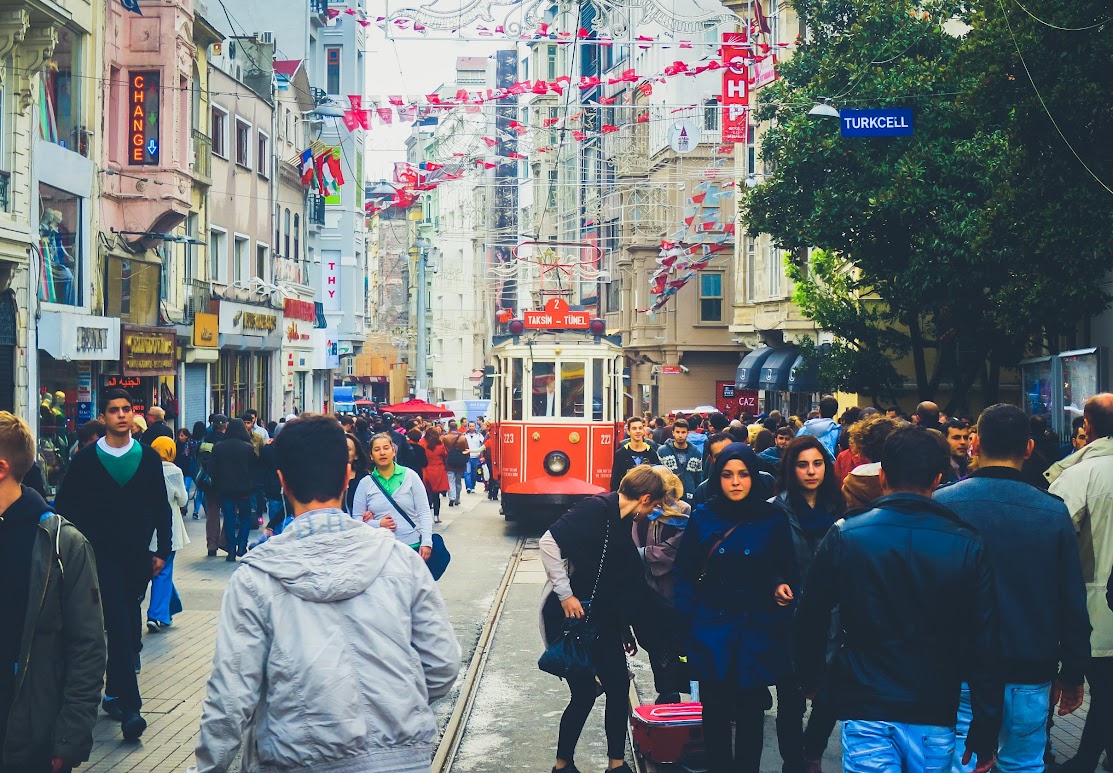 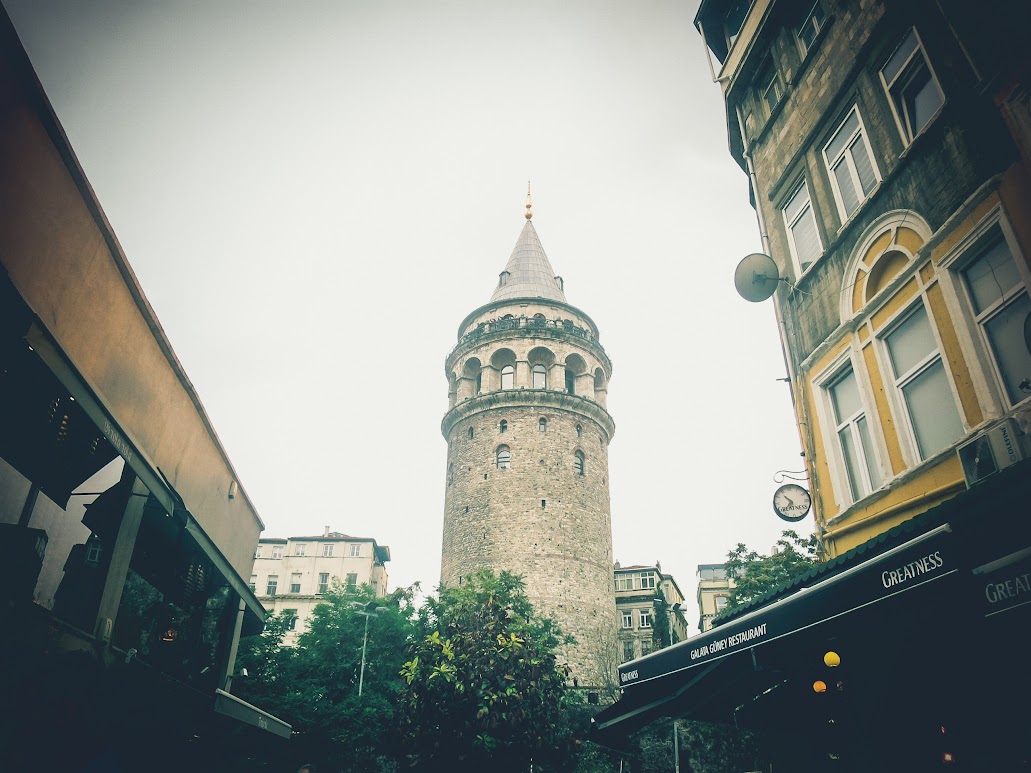 After some deliberation, we cut our plans in Kadıköy short in the afternoon and boarded another ferry. Our new destination was Beşiktaş, part of the European side of the city north of the Golden Horn, where the Ottoman royal family lived after abandoning the medieval trappings of Topkapı Palace. Starting in the Middle Ages, the northern shore of the Golden Horn was where European traders and merchants were allowed to settle and conduct their business activities with the Eastern Roman Empire and, after its rapid ascension in regional geopolitics, the Ottoman Empire. Even into the 19th century, it remained a bastion of Western European sensibilities and modernity in the Ottoman capital, and it was often the first place in the city to adopt new technology, such as electricity and subways. The influence of Western architecture was apparent as we arrived at Taksim Square and walked down the fashionable length of one of Istanbul’s main pedestrian avenues, İstiklal Caddesı. The vibrant cosmopolitan crowds, with the iconic red trams crawling up and down the street, was a far cry from the often solemn cityscapes of Fatih and the old city. 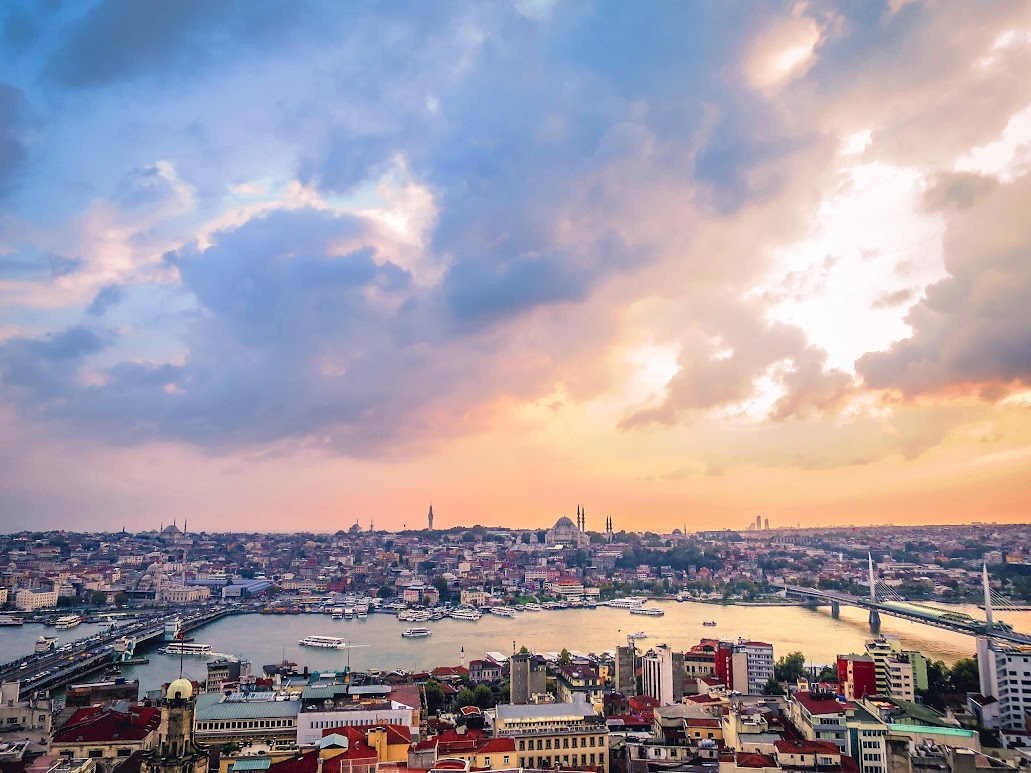 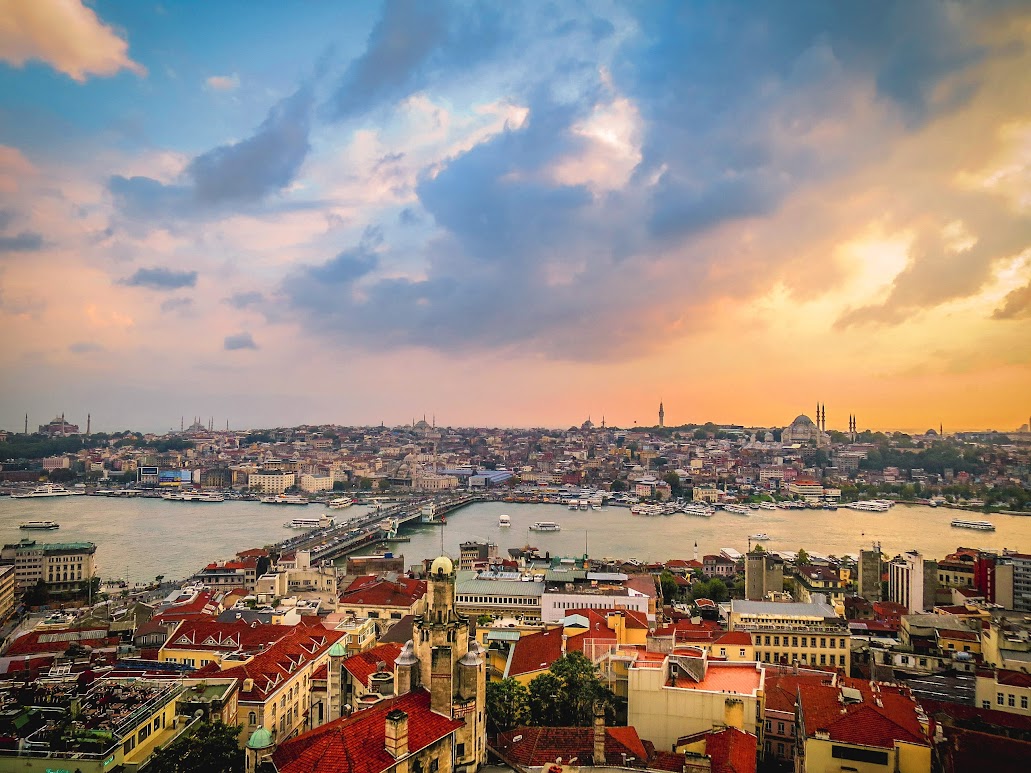 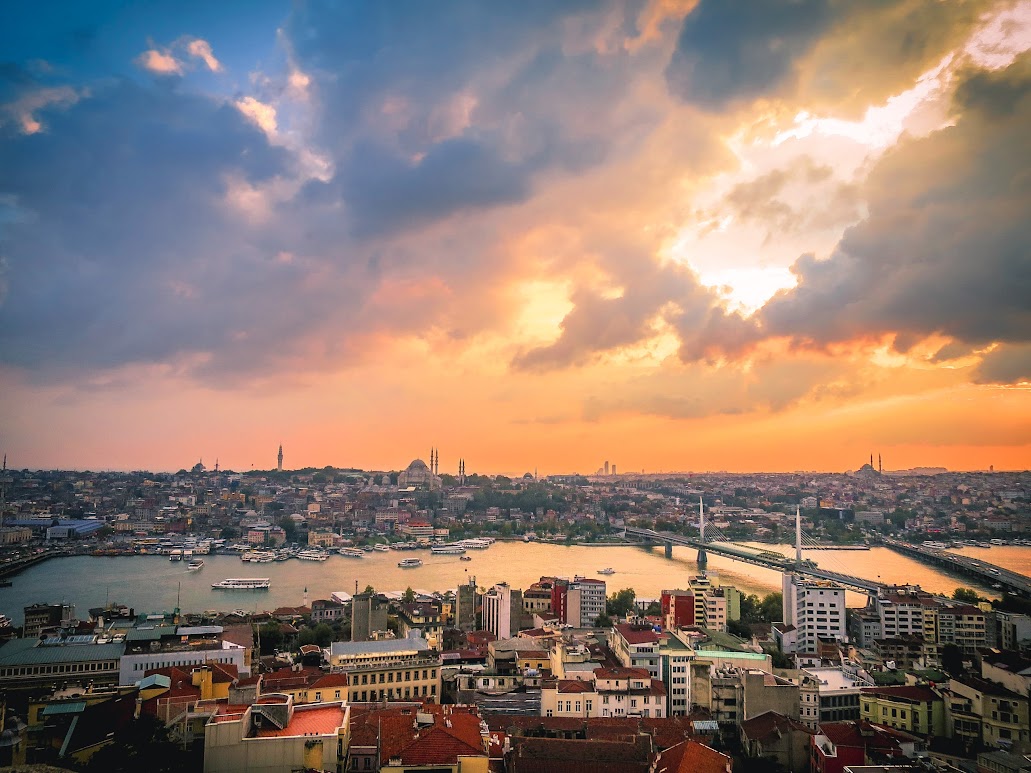 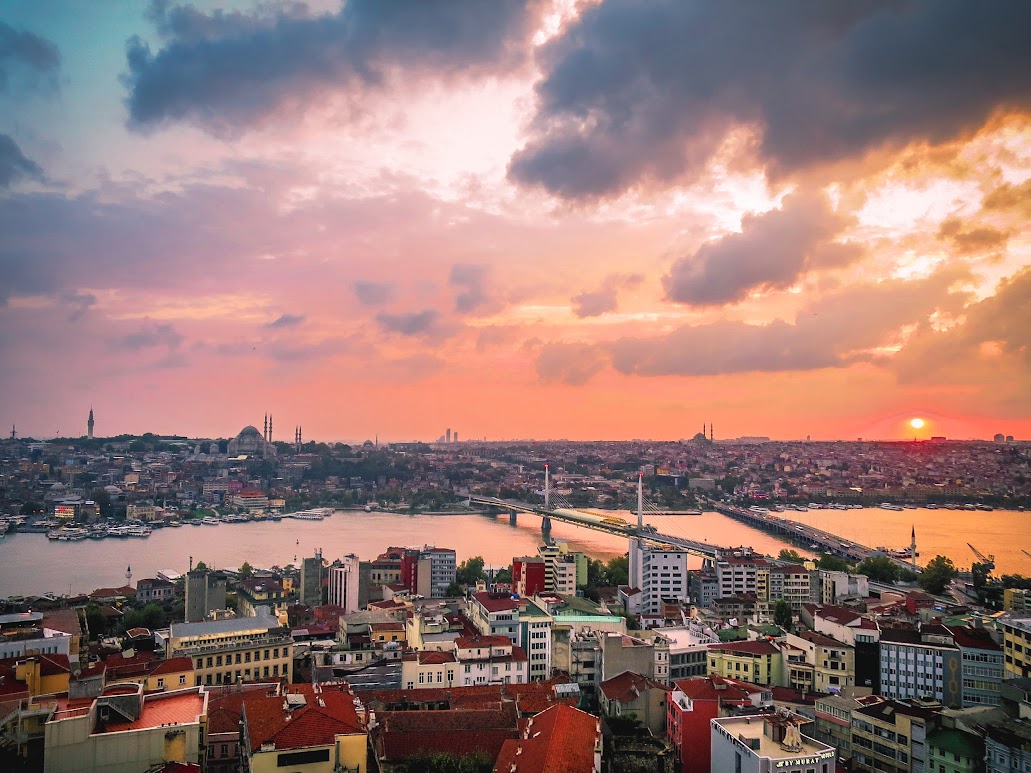 In the early evening, our journey through İstiklal Caddesı took us into Karaköy, directly across the Golden Horn from Eminönü and Fatih. One of the most famous structures in Karaköy, and certainly the most visible, is the Galata Tower, a remnant of the medieval Genoese trade colony. Used by the Ottomans to spot fires in the city, the tower itself was victim to numerous fires throughout the years, and the current structure is the product of many restoration projects. We joined the short line to get into the tower and up to its observation deck, and the timing could not have been more perfect. As we leaned against the metal railing above the city, the late summer sun bathed the old district of Fatih in a warm golden light as it began its descent. The sky filled with brilliant hues of rose and orange, even as the evening mauves and violets began their slow crawl from the world’s periphery. The sight of it was beautiful beyond words, and it was one of the absolute highlights of our time in Istanbul. It was dark when we emerged from the doorway at the base of the tower, and we crossed over the Golden Horn with the rest of the evening commuters, the lights of the nearby mosque shining on our faces. 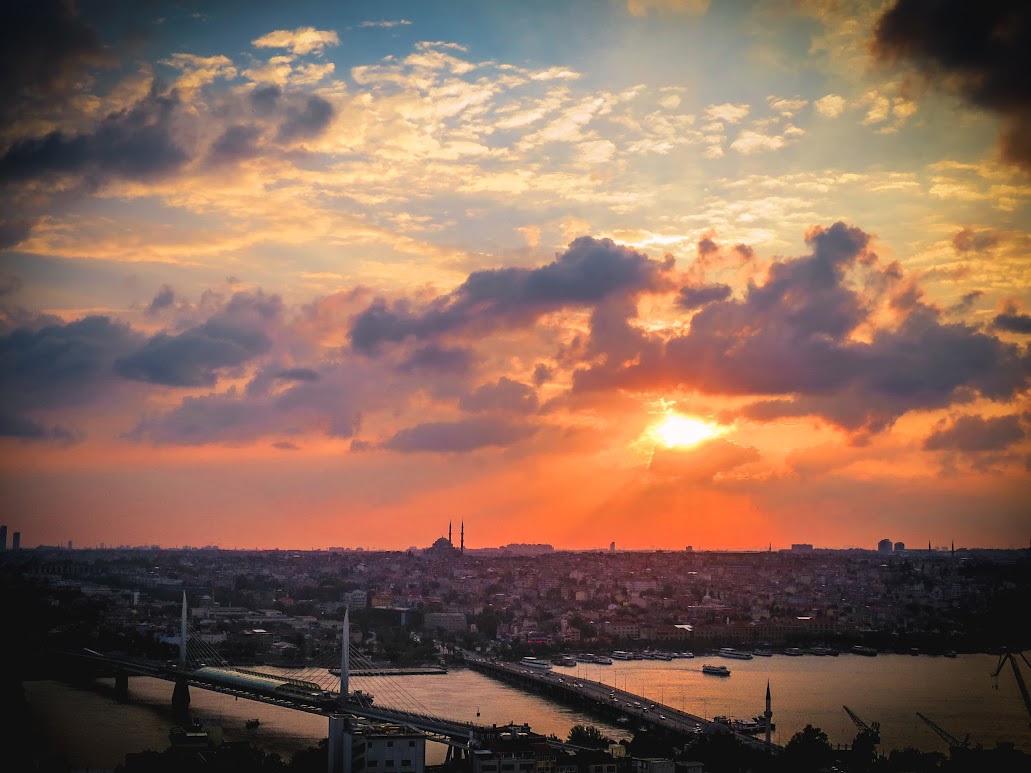