On our last full day in Istanbul, we walked across the Galata Bridge, spanning the Golden Horn, and set our sights on the neighbourhood of Ortaköy in the Beşiktaş district. Our path would take us through İstiklal again, before veering towards the shores of the Bosphorus. From there, we would head north, following the water all the way to Ortaköy. The journey would take the better part of a day, but we were in no rush. We had plans to meet up with a family friend for dinner just north of Ortaköy, but that wouldn’t be until later in the afternoon, and we had no intention of filling our final hours in The City with any sense of urgency.  After filling up on pomegranate juice and kebabs, we were on our way. 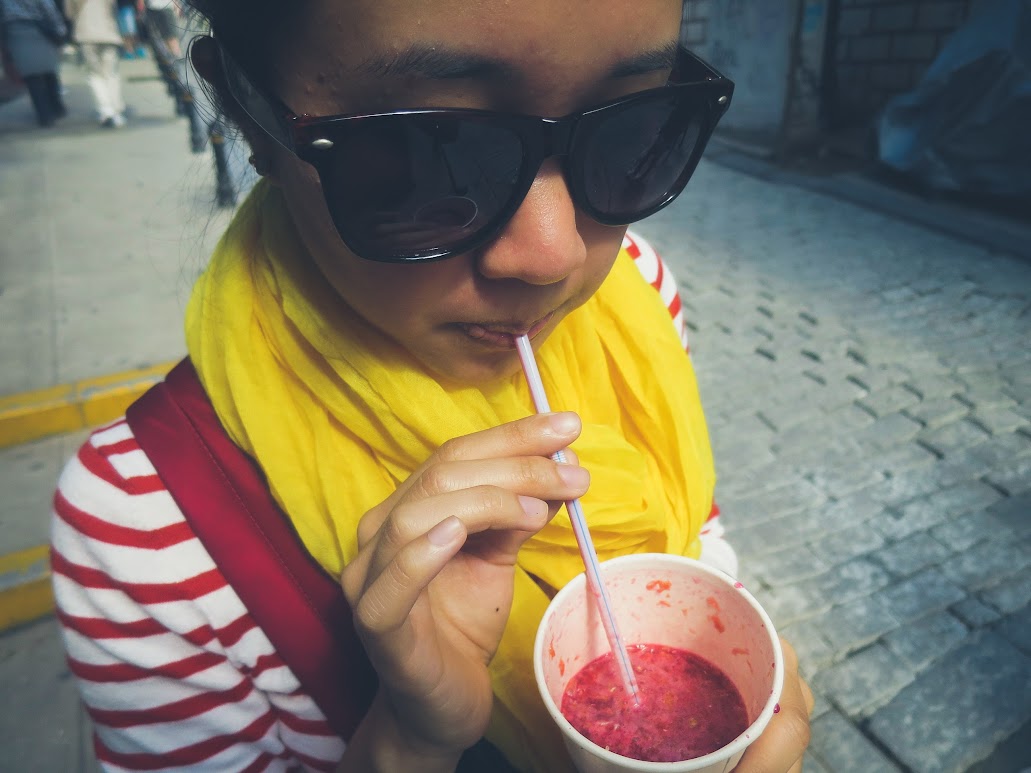 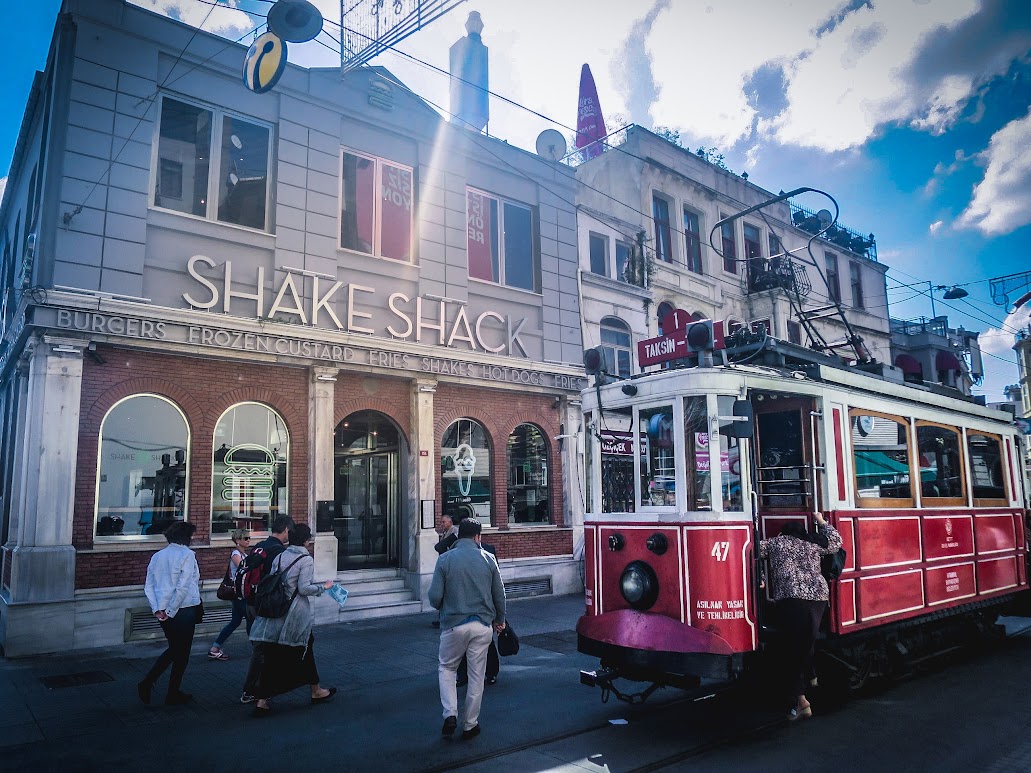 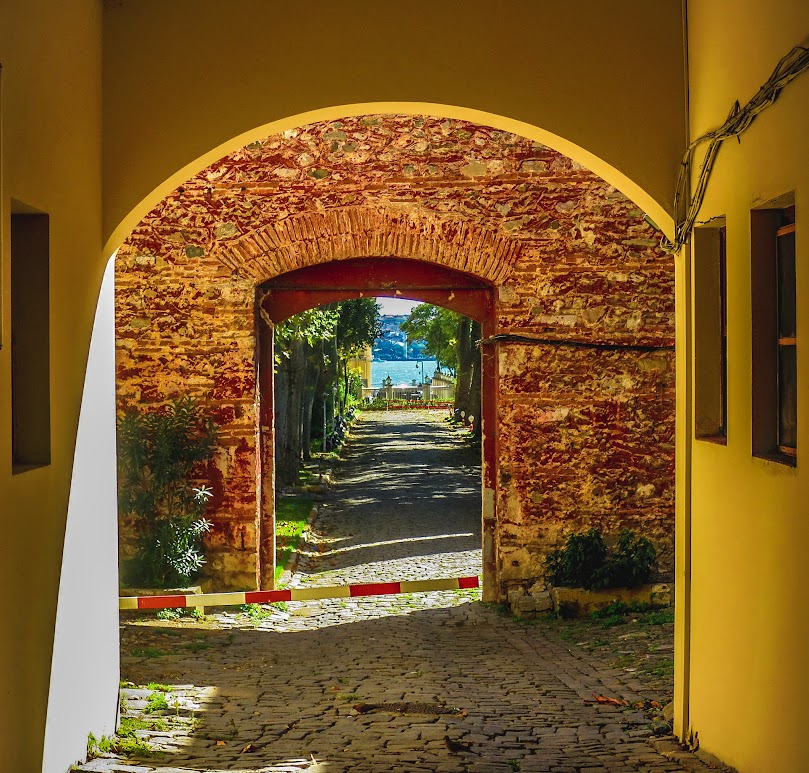 As we walked through the leisurely morning crowd along İstiklal, we caught glimpses of the sun-dappled water in the distance, gleaming through open gates and in between buildings and courtyards. At Taksim Square, we bore right and followed İnönü Caddesi as it gently curved down the hill, past hotels, consulates, and hospitals, before butting up against a small park across the road from Dolmabahçe Palace. We cut across the patchy acre at the bottom of the hill and began our long walk on the waterfront street that would begin as Dolmabahçe Caddesi, before turning into Beşiktaş Caddesi and, finally, Çırağan Caddesi. 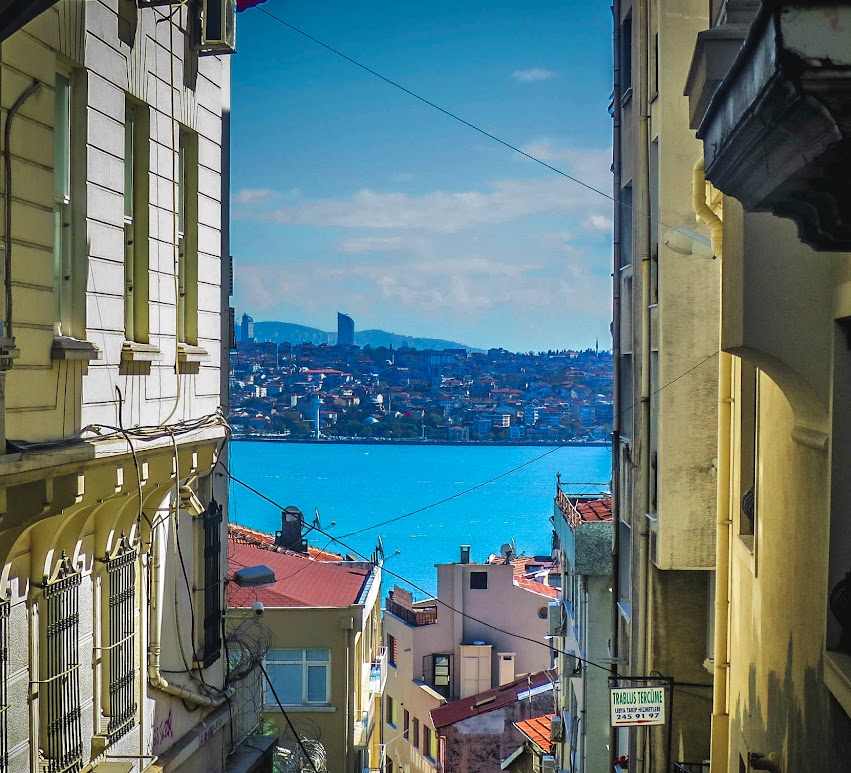 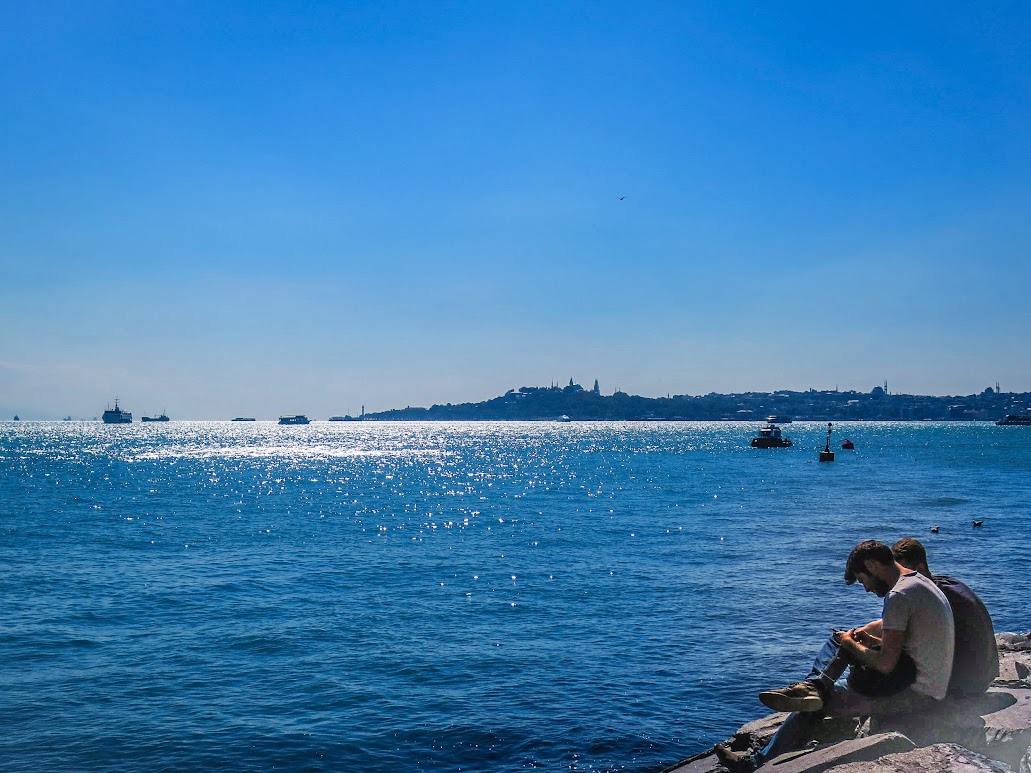 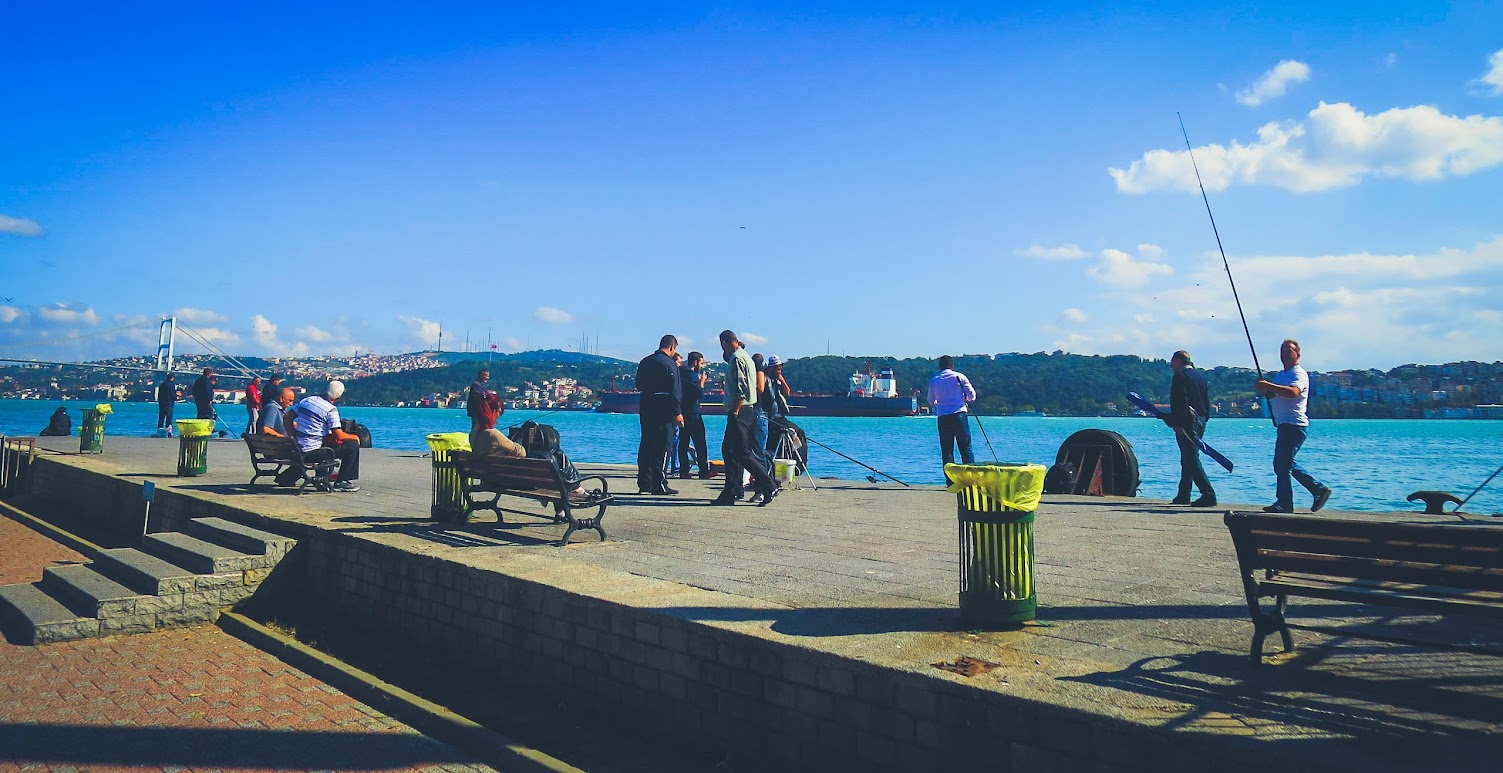 Since Ottoman times, the comfortable and secure waters of the Beşiktaş waterfront has been prime property for sultans, princes, viziers, and other members of the establishment elite. Out of their vast wealth, they constructed private refuges away from the clamour of the walled city, building elegant palaces, hunting lodges, mosques, and mansions among what was once forestland and quiet harbours. The Ottoman capital would eventually outgrow its modest boundaries, and Beşiktaş was soon engulfed in the rapidly expanding neighbourhoods and suburbs north of the Golden Horn. Though the palaces remain, the days of the Bosphorus being an exclusive retreat for the city elite are largely over. Students and young lovers draped themselves on the benches and piers that overlooked the water, while old men sat back and cast line after line into its azure depths. Orhan Pamuk, the celebrated Turkish author and son of Istanbul, wrote about the pleasures of taking walks along the Bosphorus as a way of giving himself perspective on life. Judging from the scattered crowds dotting the water margins, there was plenty of perspective in demand, as Ashley and I retraced the steps of many an Istanbullu. 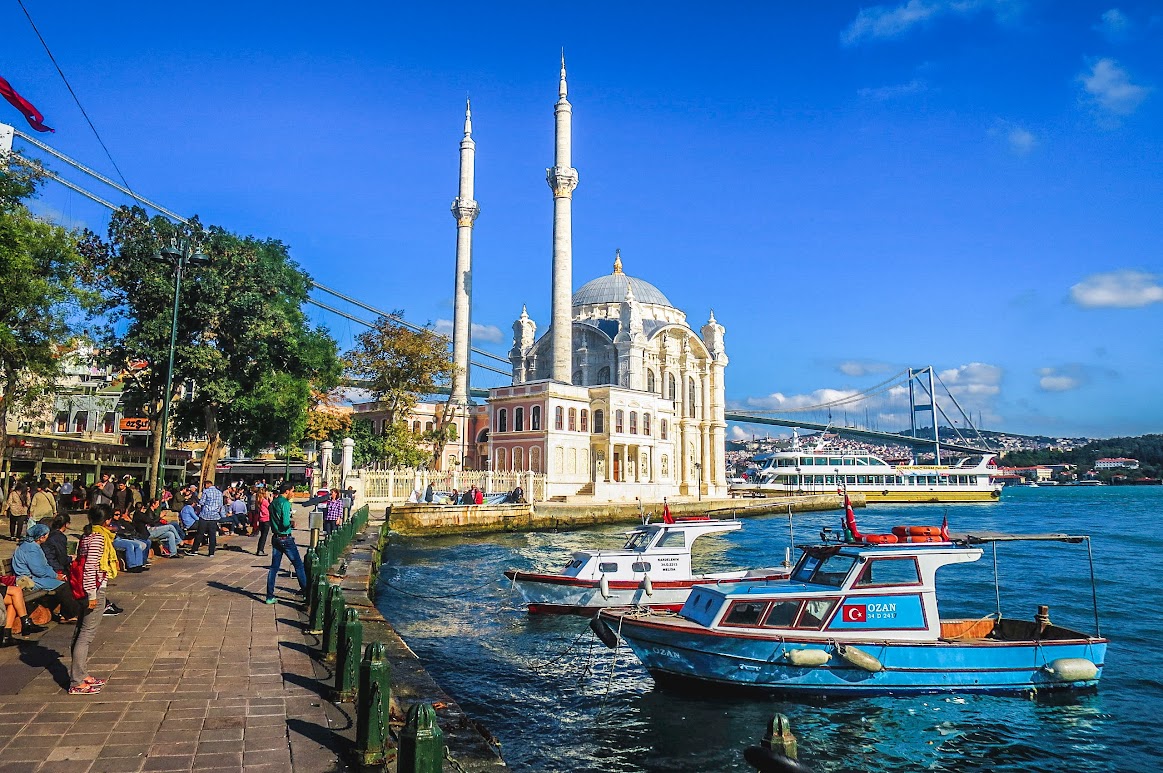 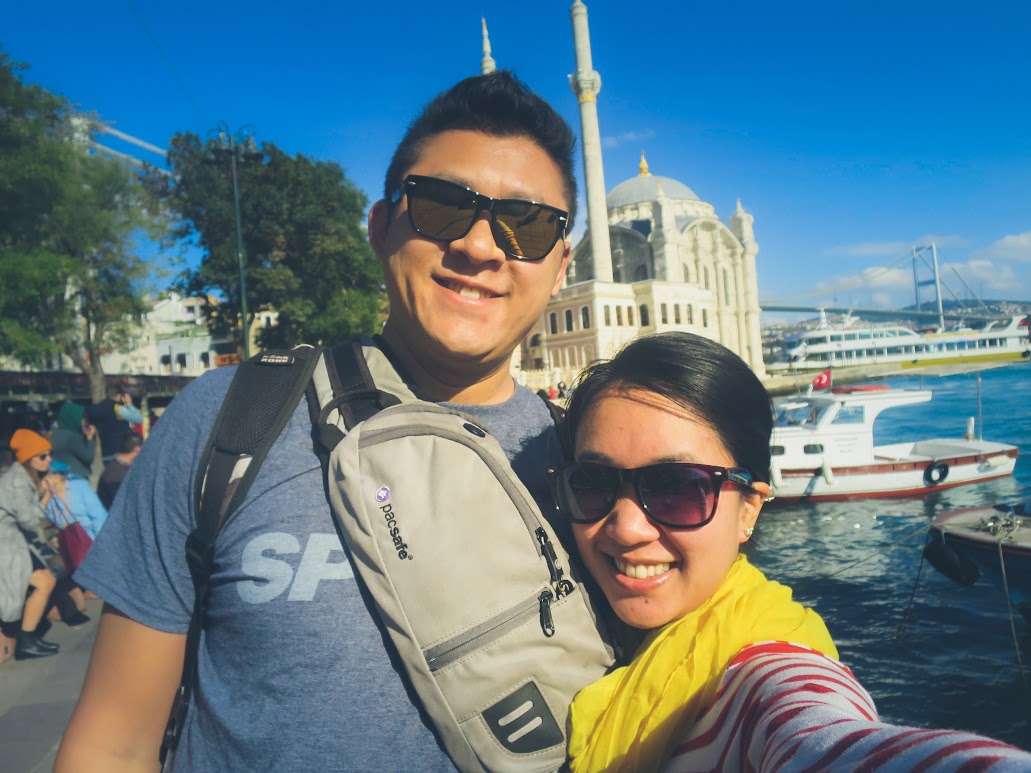 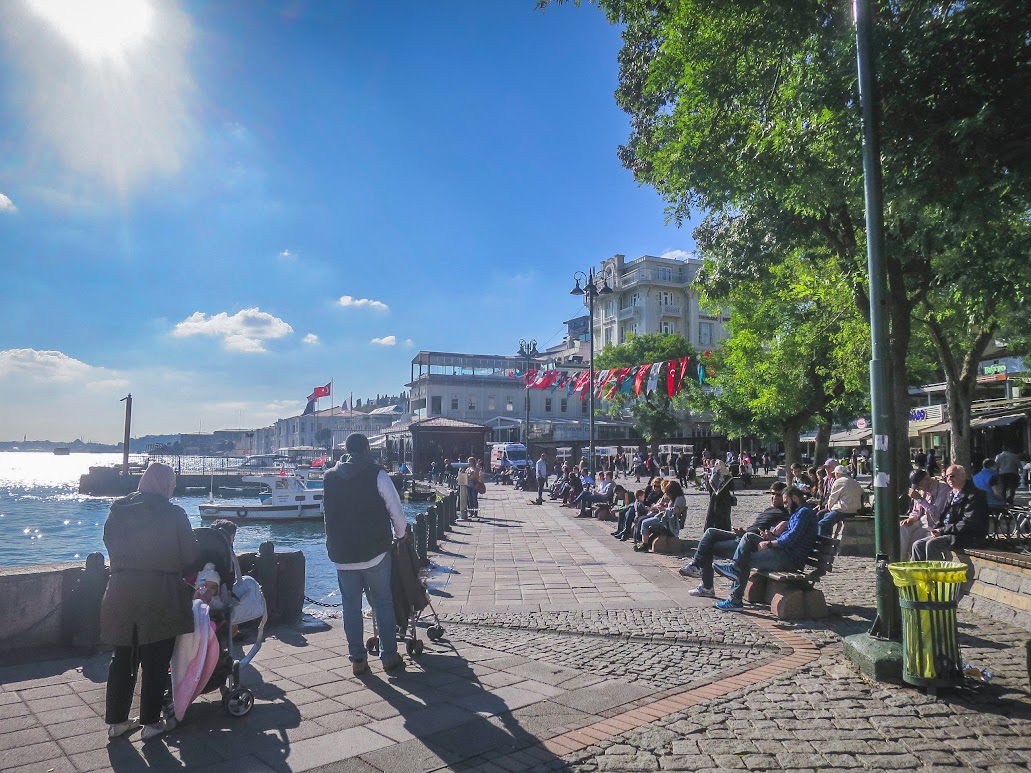 We arrived in Ortaköy mid-afternoon, reaching the popular ferry port area just past the grounds of Galatasaray University. Historically, Ortaköy was known for its cosmopolitan population, but little remains of its former Greek, Armenian, and Jewish residents after the creation of Israel in 1948 and the Istanbul riots of the 1950s. Today, the neighbourhood is famous for its plentiful restaurants and cafés, seaside nightclubs, and the stunning Ortaköy Mosque, a 19th century Neo-Baroque structure built by Sultan Abdülmecid. What it lacks in size, especially in comparison to the monumental imperial mosques in Fatih, it more than makes up for in its delicate attention to detail. The sight of the little mosque, with the massive Bosphorus Bridge as the backdrop, is one of the more famous views in modern-day Istanbul, and Ashley and I spent the rest of the afternoon in its shadows, gazing across the water at the Asian shores. 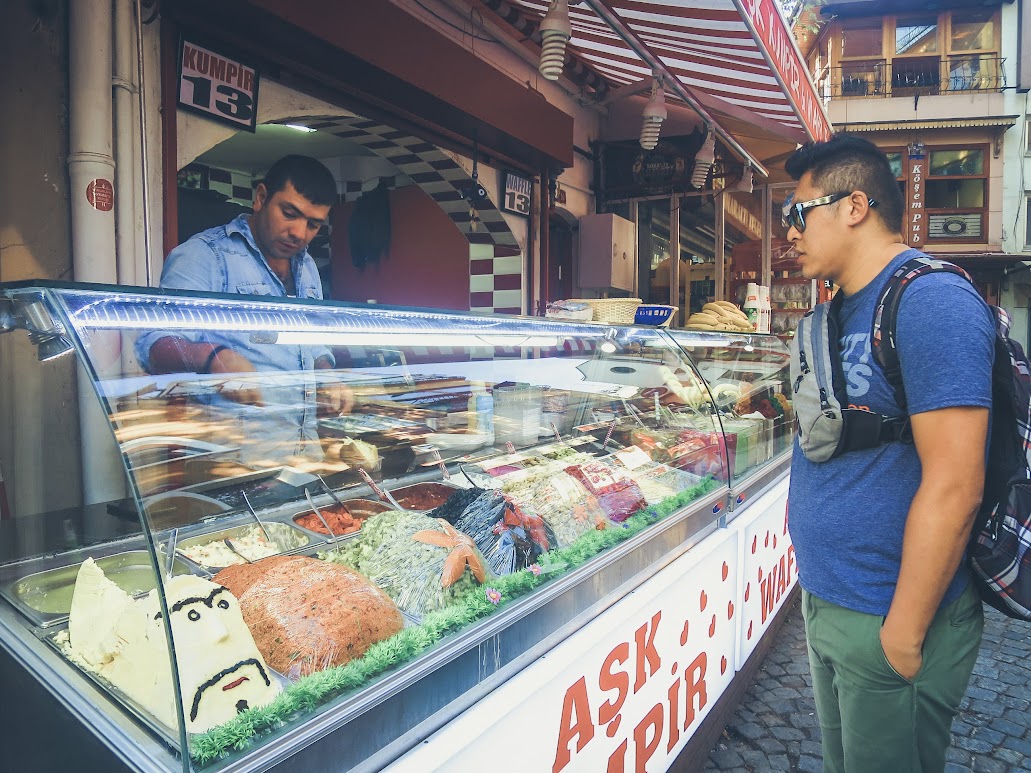 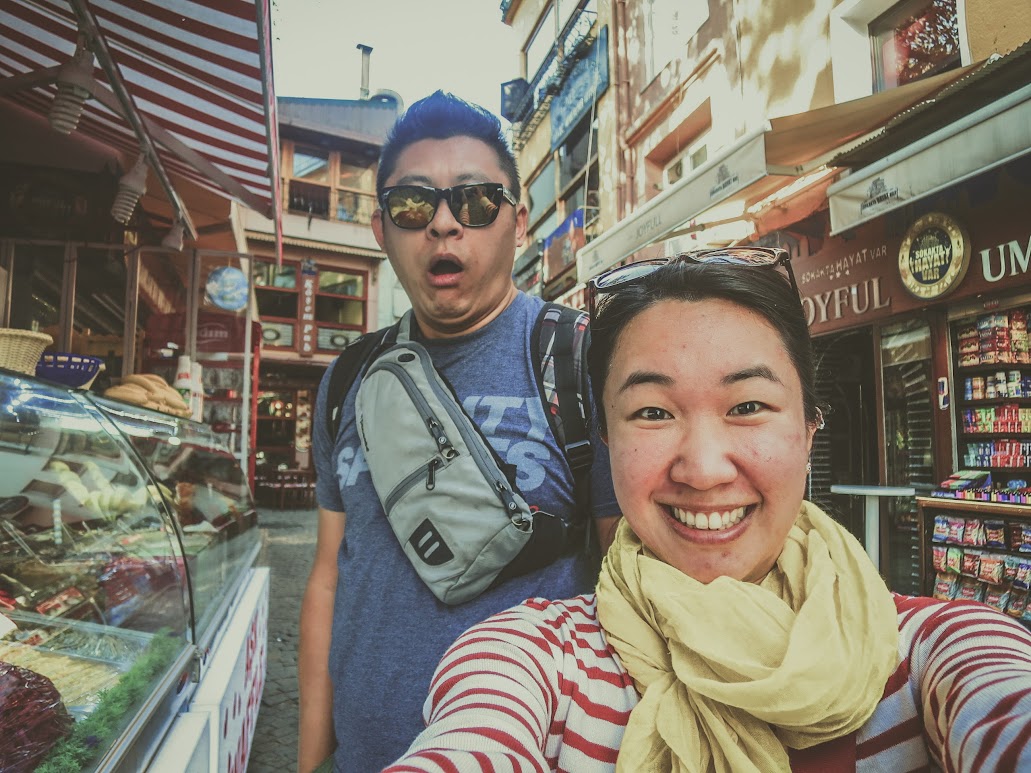 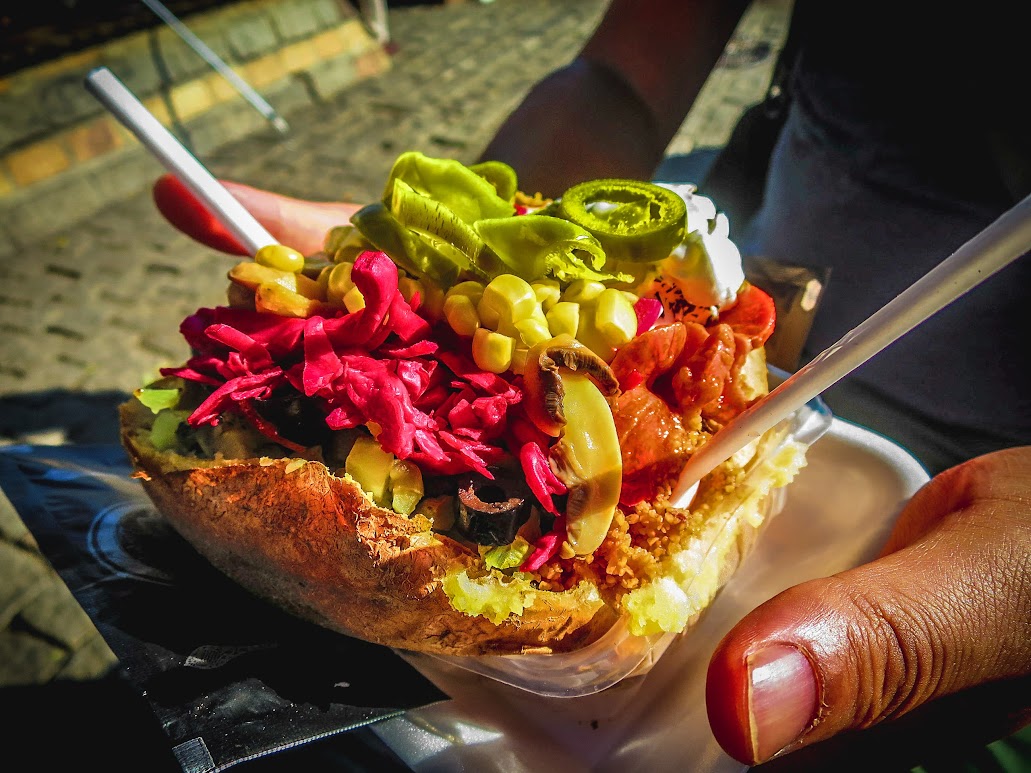 After polishing off our coffees at one of the cafes by the ferry port, we went outside to enjoy the late afternoon by the narrow sea. We were supposed to meet our dinner companion just a few minutes walk north of where we were, but there was one more Ortaköy specialty on my list, and after a few minutes of faffing about we set off in search of the legendary kumpir. The kumpir is a staple of Istanbullu street cuisine, consisting of a baked potato and a myriad of sauces and toppings. One can find kumpir stands all around the city, but Ortaköy is where they’ve become a household name. We wandered the small streets behind the seaside restaurants before we stumbled on an unassuming stall set into an alley. There was a bit of a language barrier, but when it comes to food it’s usually enough to just point and nod. The kumpir maestro behind the glass quickly split open a massive, steaming, baked potato and skillfully dolloped heaps of butter and cheese into the gooey middle. He then whipped the butter, cheese, and potato into a creamy mash in situ, before pausing for us to choose our toppings. I chose all of them, or close to it. In the end, our kumpir was piled high with corn, pickled beets, mushrooms, olives, pickles, jalapenos, hotdog slices, sour cream, and half a dozen other condiments. It was messy, but it was heavenly. 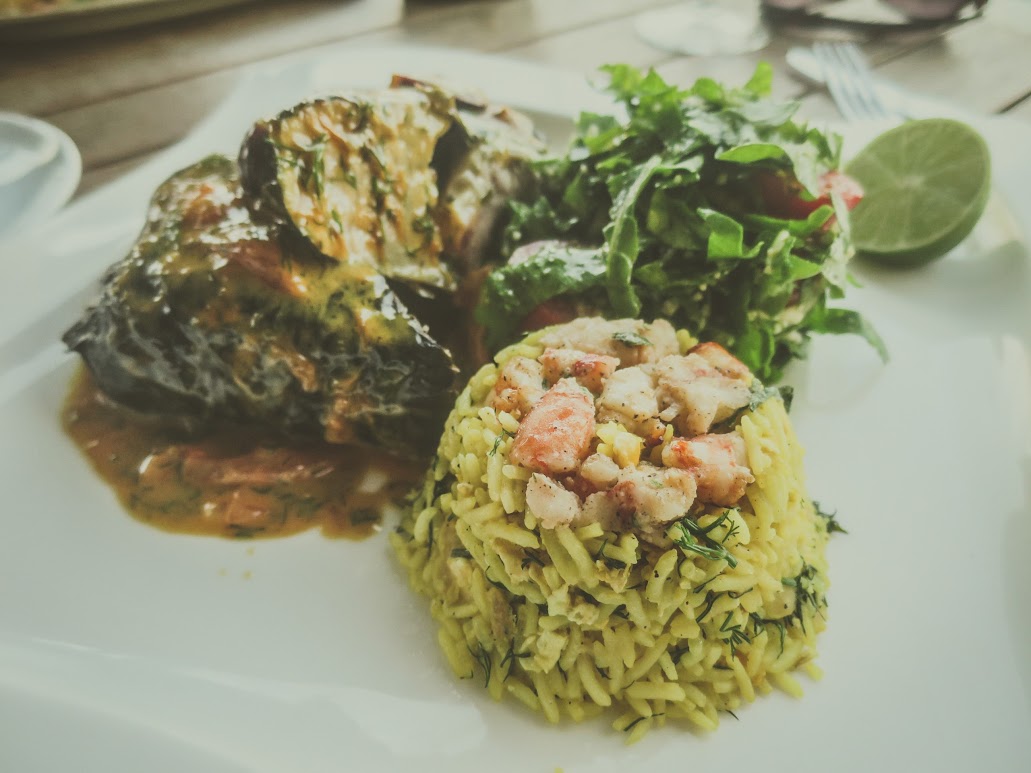 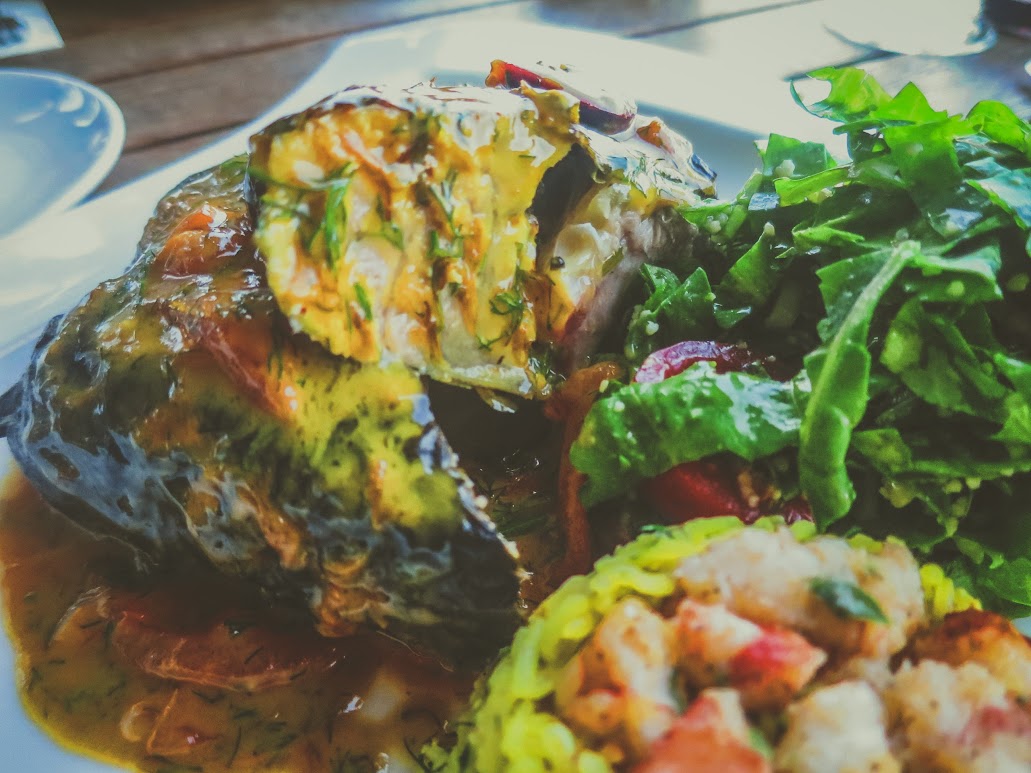 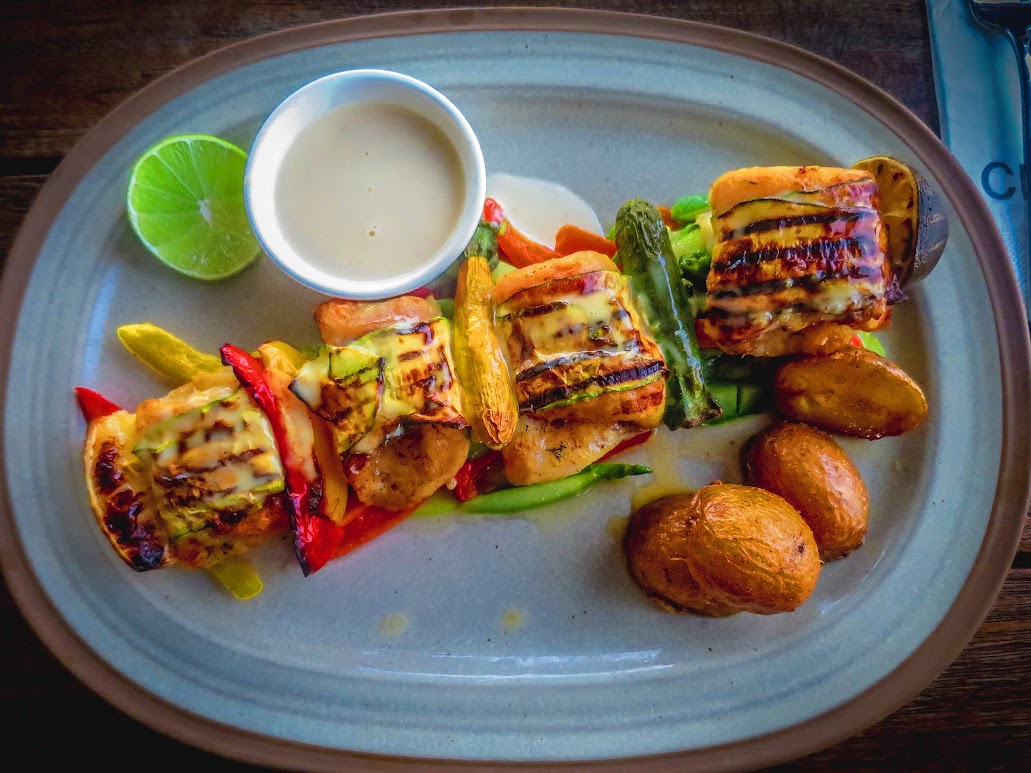 After the kumpir experience, it was almost time for us to meet up with Efe, a business associate of Ashley’s dad who had just moved back to Istanbul from abroad. His family was involved in the textiles business, and he had lived and worked in Shanghai for a number of years. Ashley had met Efe before, and he had quickly become a family friend through his business relationship with my father-in-law. Efe picked us up in Ortaköy and drove us a few minutes north to the neighbourhood of Bebek, one of the more affluent areas of modern Istanbul. Its name is derived from the term Boğaz’ın Gözbebeği, which translates to the apple of the Bosphorus’ eye. There is a distinct Mediterranean vibe to Bebek, the sort of atmosphere that conjures up images of yachts, palm tree-lined boardwalks, and seaside restaurants with their own docks to accommodate guests coming in by motorboat. In fact, the restaurant that Efe took us to had its own dock, complete with wide, floor-to-ceiling windows looking out onto the Bosphorus. The view and the relaxed evening atmosphere were well matched by the food and the dinner conversation, and it was a great way to end our time in Istanbul.

Ashley and I returned to our hotel that night to pack up our things and get some rest before our early morning flight the next day. We had spent four full days in The City, soaking in its thick history and just barely scratching the surface of its ongoing transformation into a world capital of a new age. The complexity of Istanbul almost demands a repeat visit, or visits, and I’m sure we’ll set foot within its walls again in our lifetime. For now though, we would be traveling from the very centre of Ottoman power and wealth to its often troublesome and perplexing periphery, at the frontier of Christian Europe and the Islamic world. 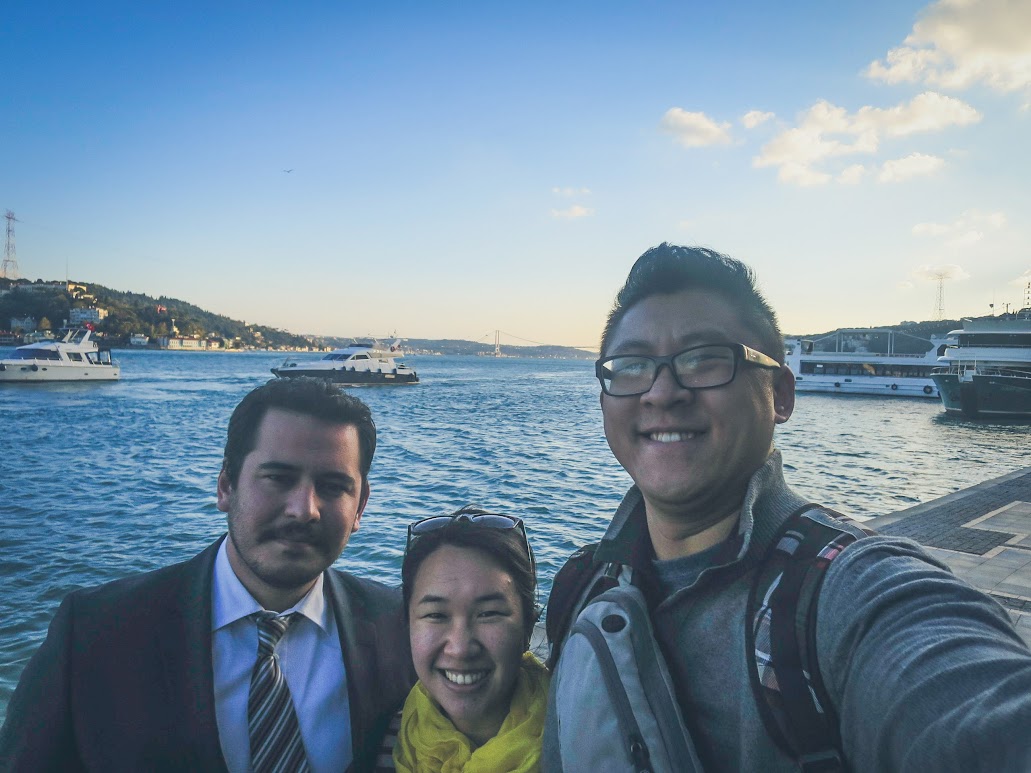