After leaving the elephant seals at Point Piedras Blancas that morning (see the first part of our PCH drive here), we spent the rest of the late morning/early afternoon slogging through the largely forgettable landscape between Paso Robles and Salinas. The closure of Big Sur forced us to take the detour away from the coast, but once we hit Salinas, we made our way back towards the ocean, setting our sights on one of the gems of the California coast: Point Lobos State Natural Reserve.

Located just a few minutes drive south of Carmel-by-the-Sea, the small peninsula offers breathtaking views of the coastline, endless coves and hidden bays teeming with wildlife, and abundant trails and forest paths criss-crossing the rugged landscape. We arrived mid-afternoon, and after paying the $10 entrance fee, we drove down to the southern coastline of the reserve and parked in one of the lots by the ocean. Clambering over rocks and picking her way through convoluted landscapes is totally Ashley’s jam, and she had a ball exploring the tidal pools and outcroppings along the jagged shoreline. 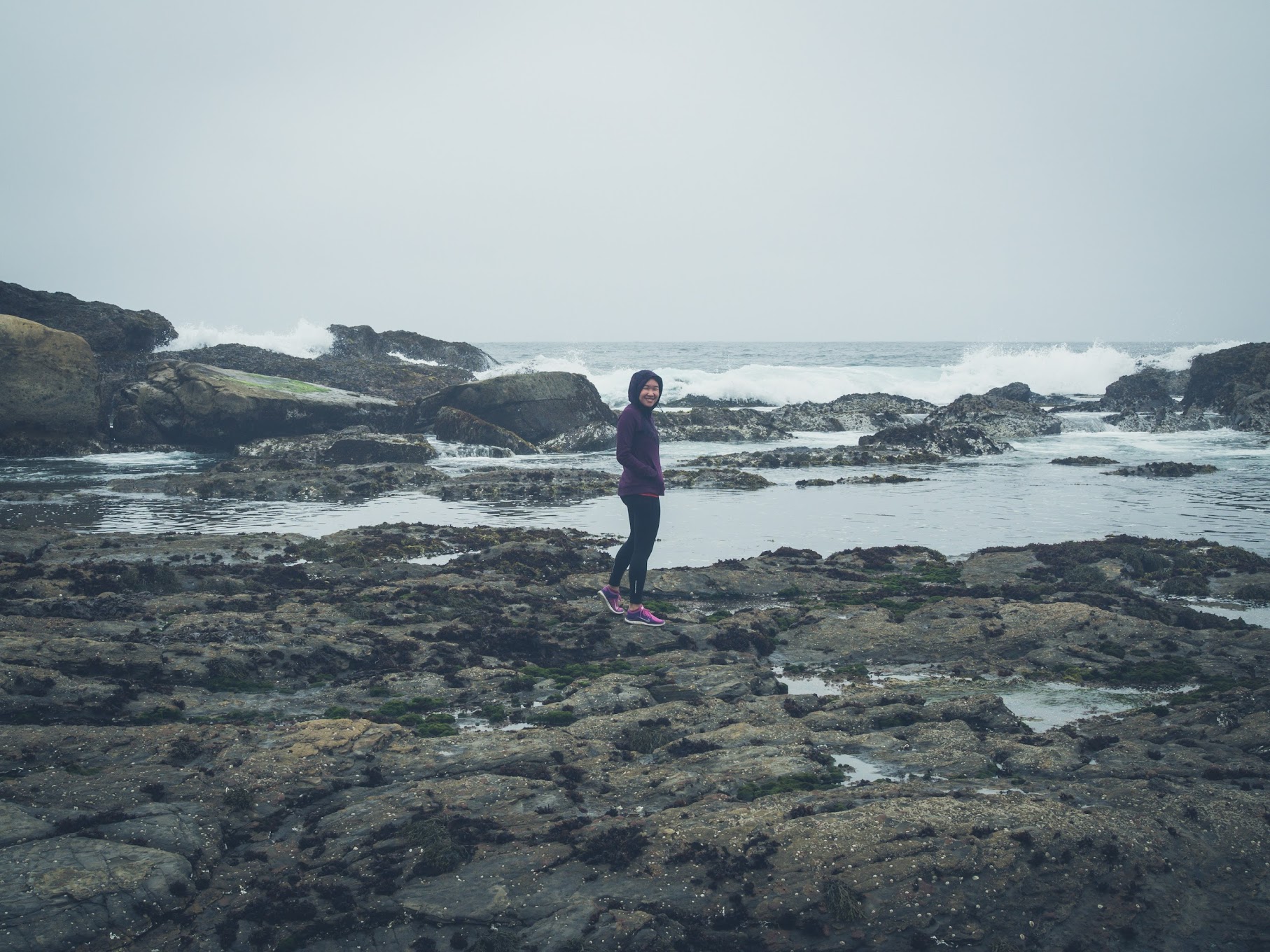 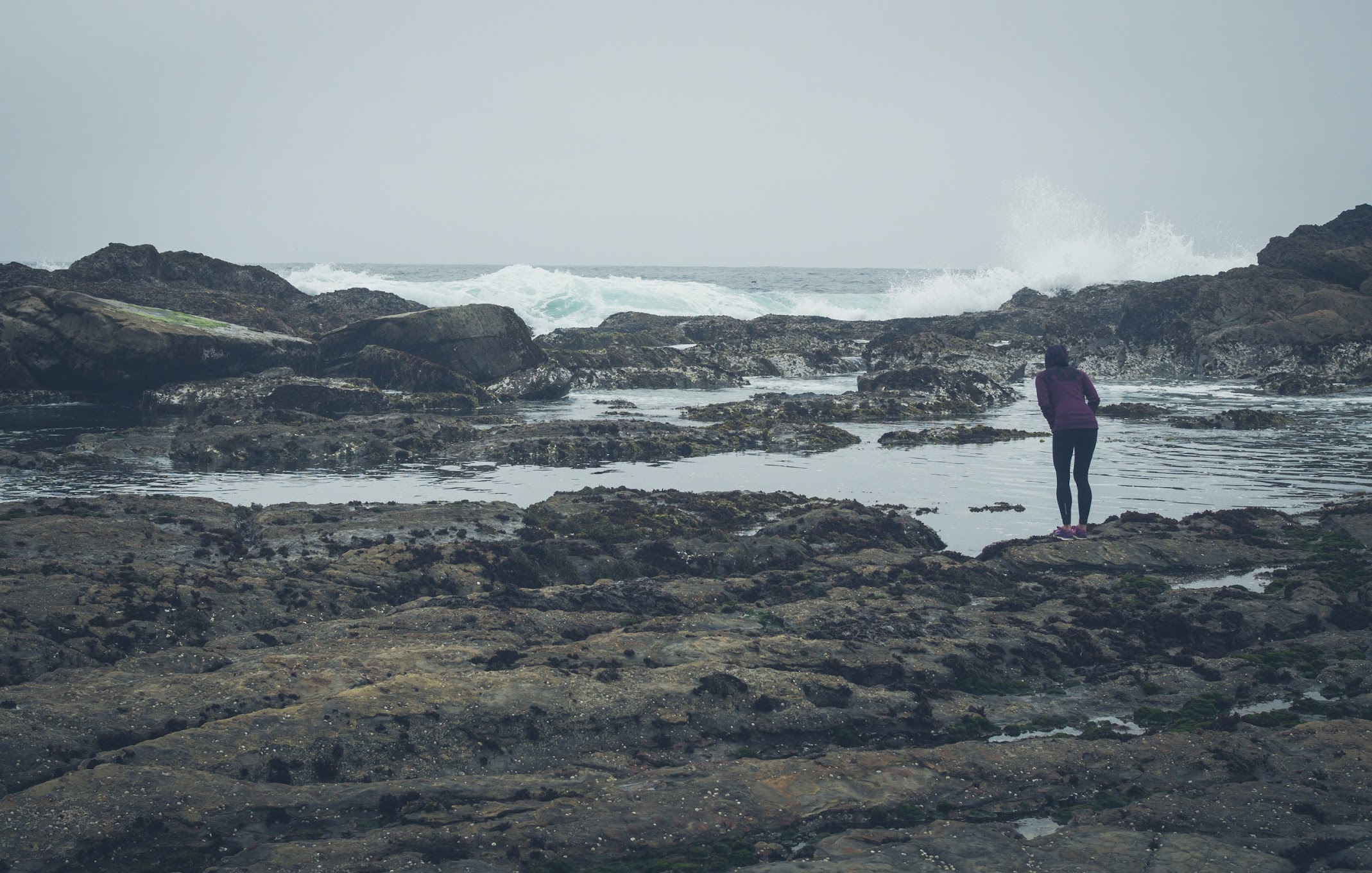 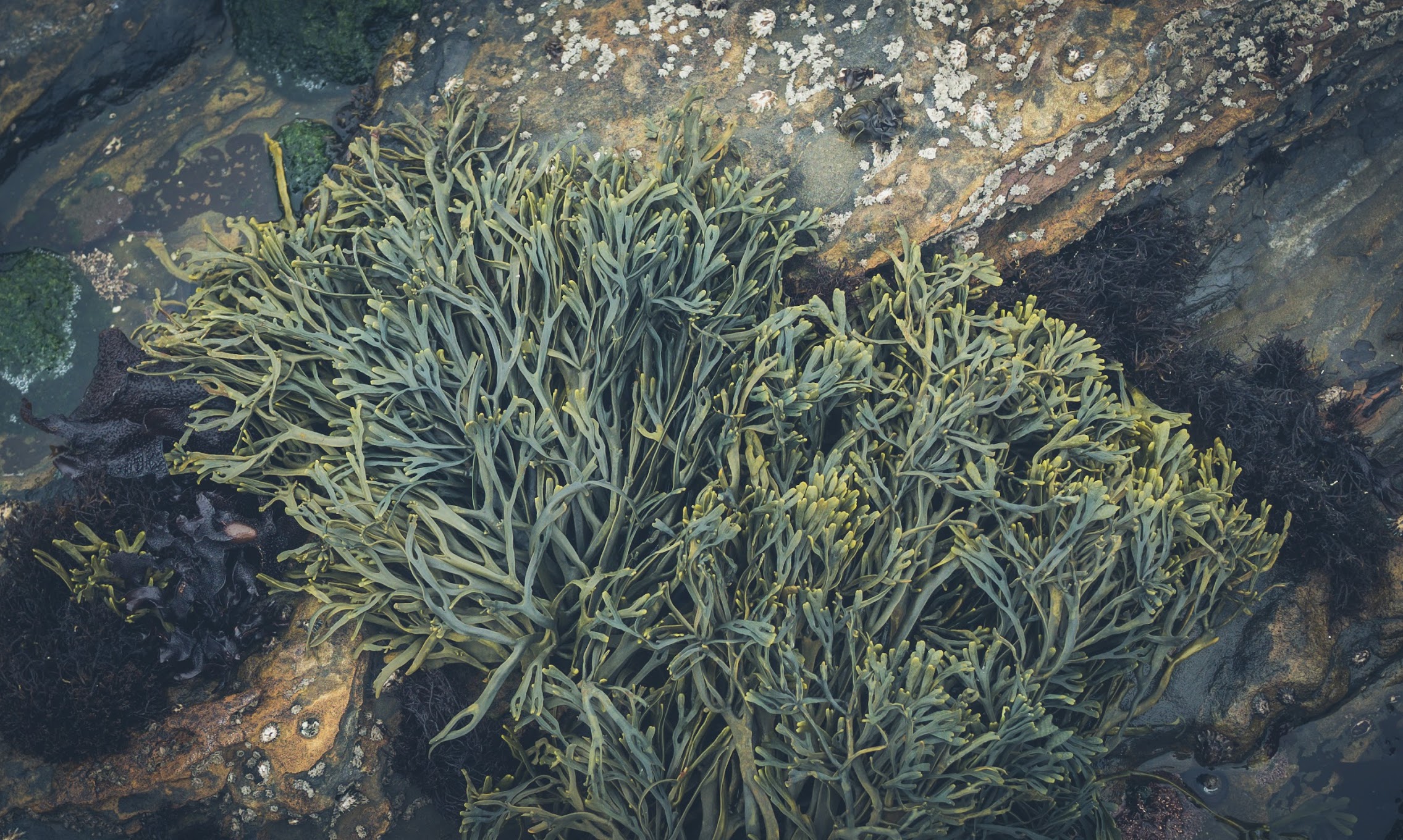 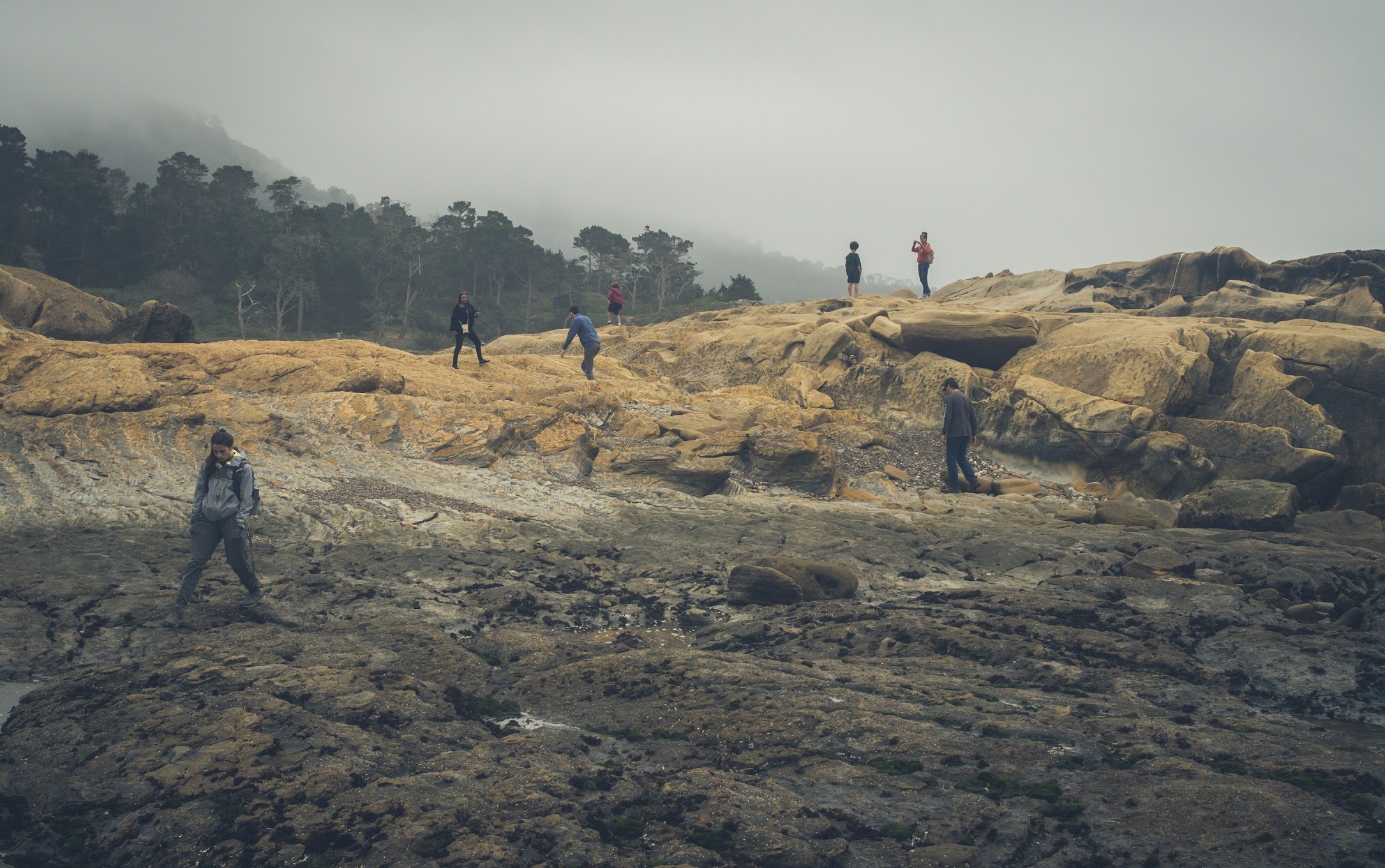 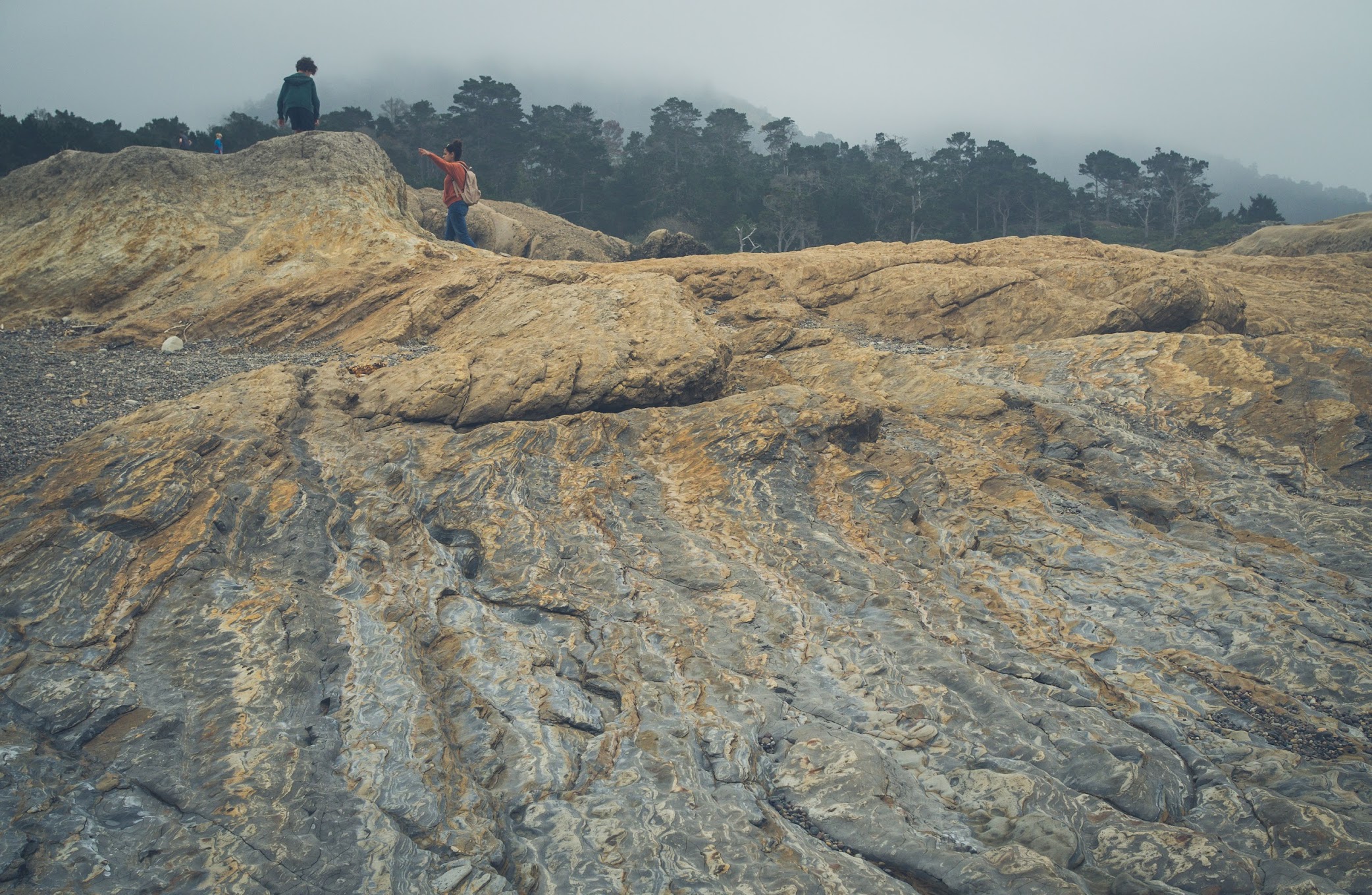 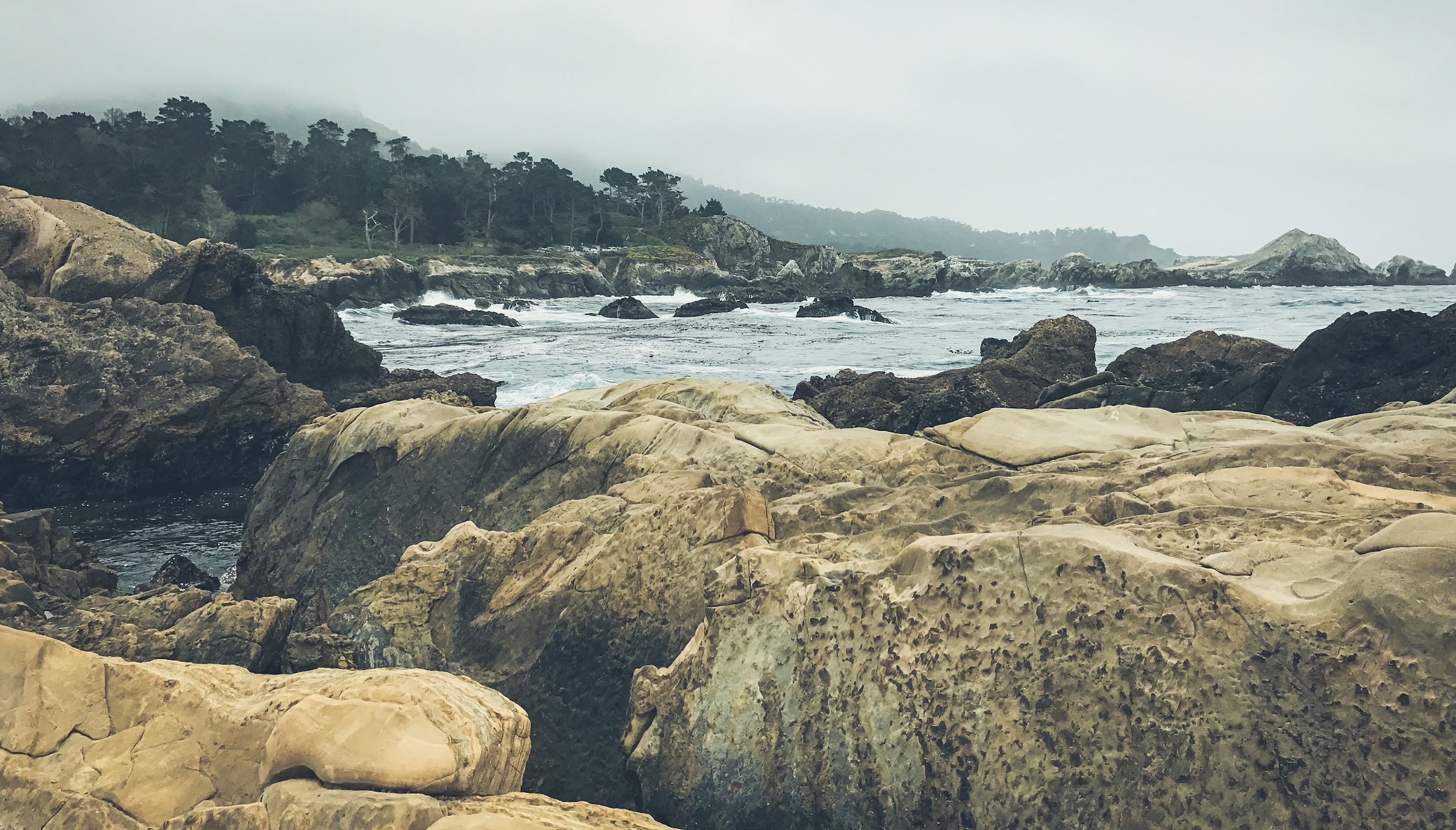 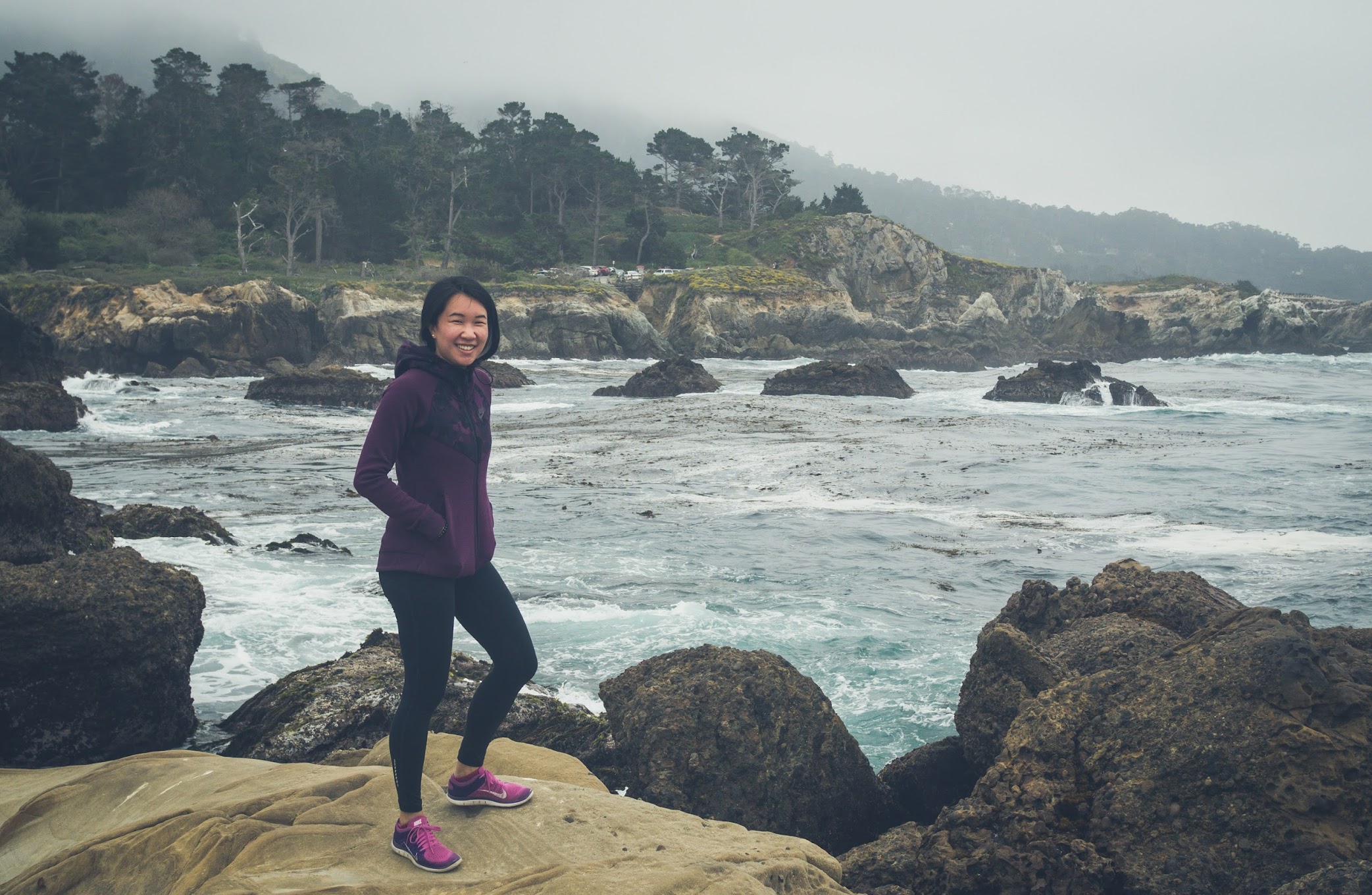 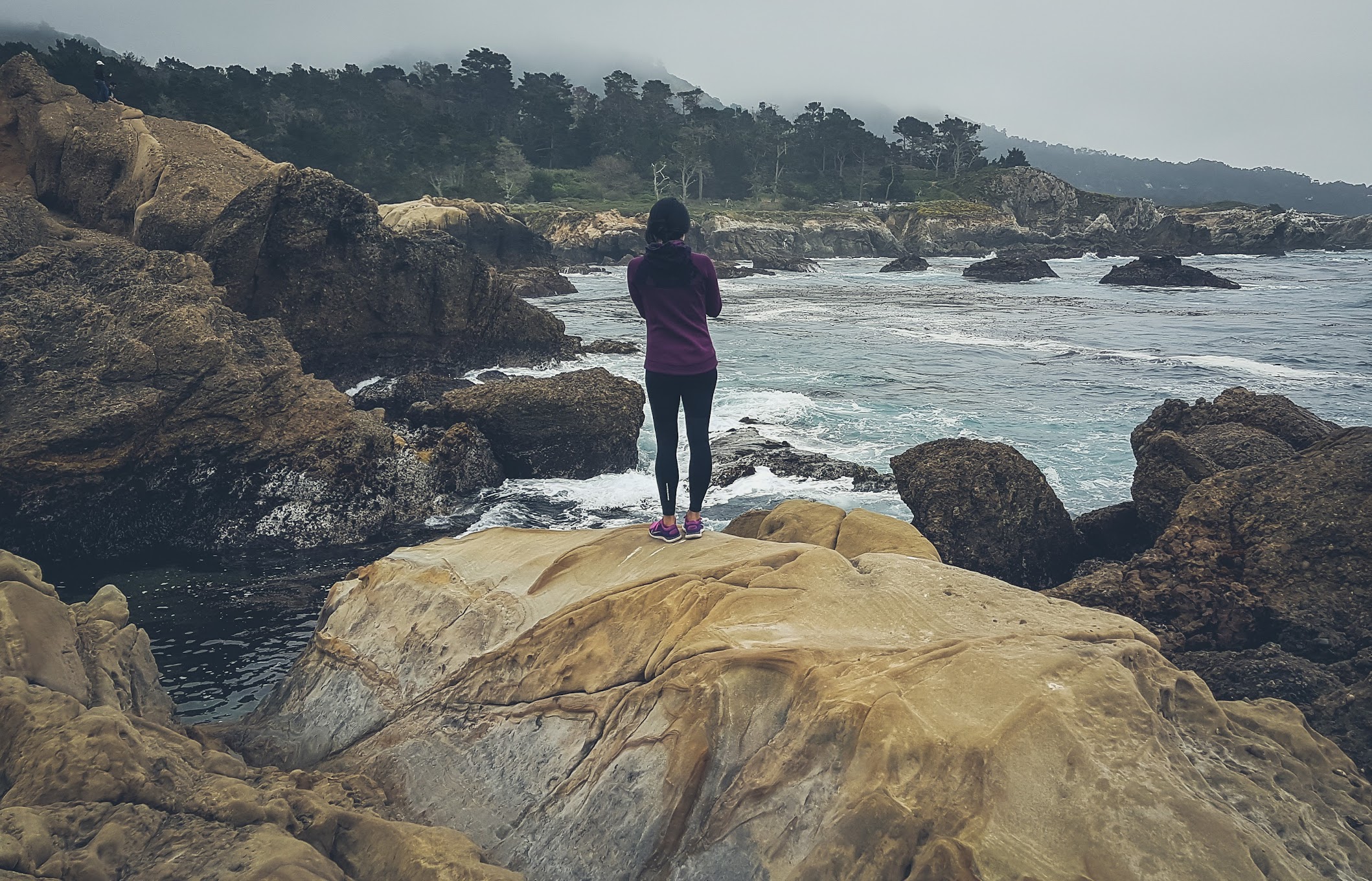 One of the more striking elements of Point Lobos’ distinctive landscape is the presence of the rare Monterey cypress, a species of cypress limited to only two native populations in the world: one in Pebble Beach, the other in and around Point Lobos. As Ashley and I walked along the North Shore Trail, the hillsides around us were covered in the hardy conifers, twisted and shaped by the brisk sea winds. The gnarled, bone-white trees stood out against the rich green foliage, the branches spiralling and twisting in on themselves. It was wild and beautiful and completely otherworldly – and everything I was hoping to find at Point Lobos. 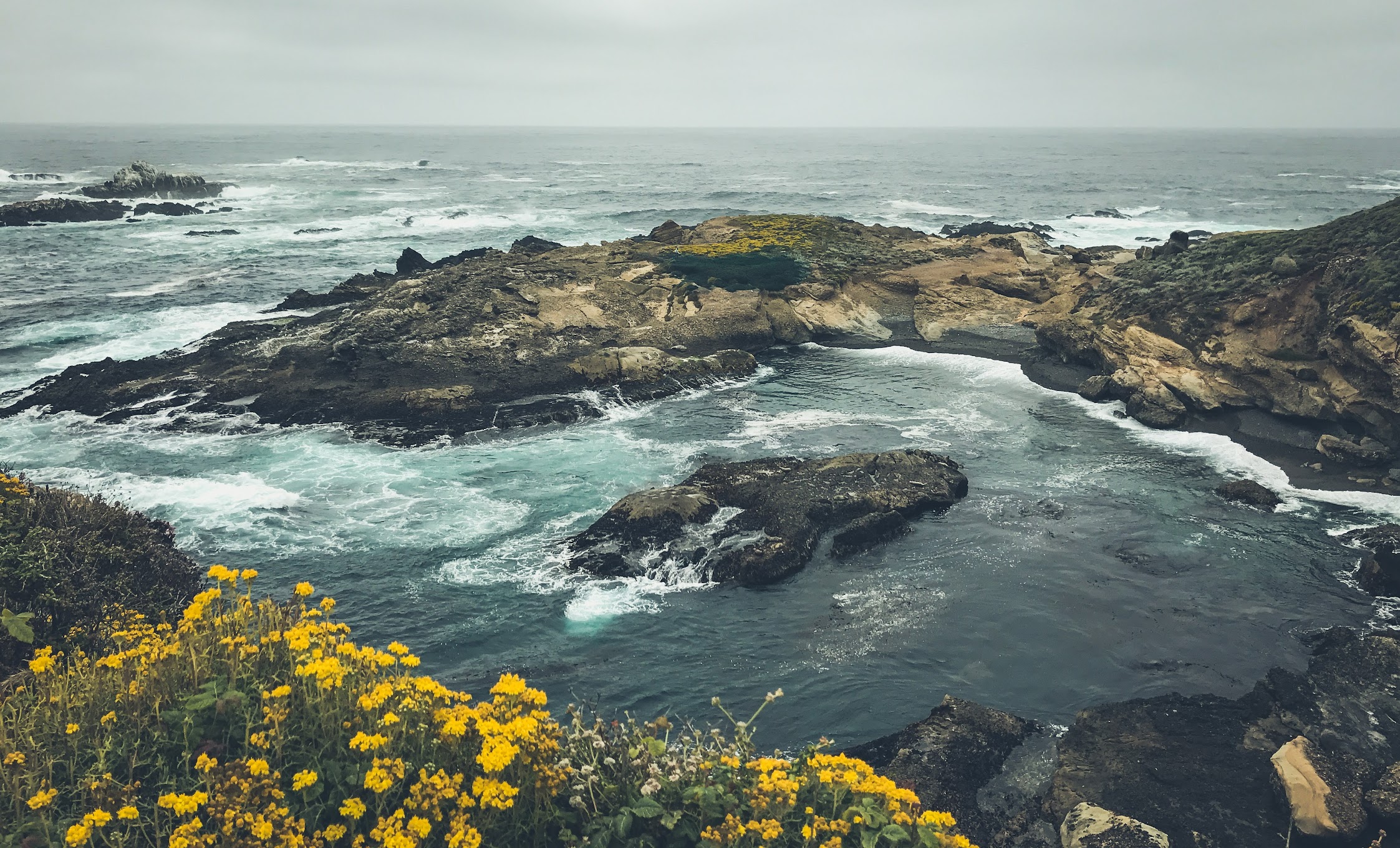 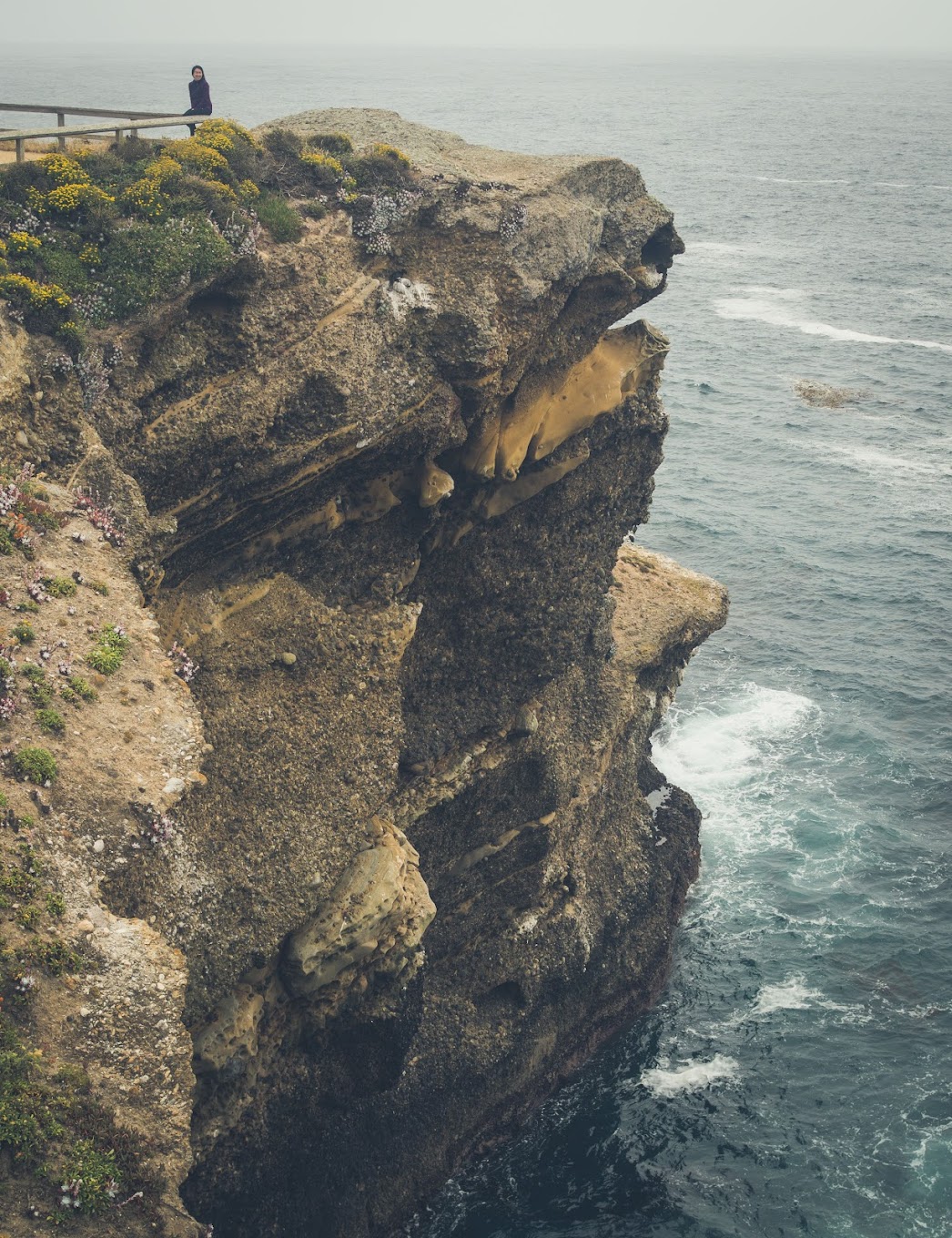 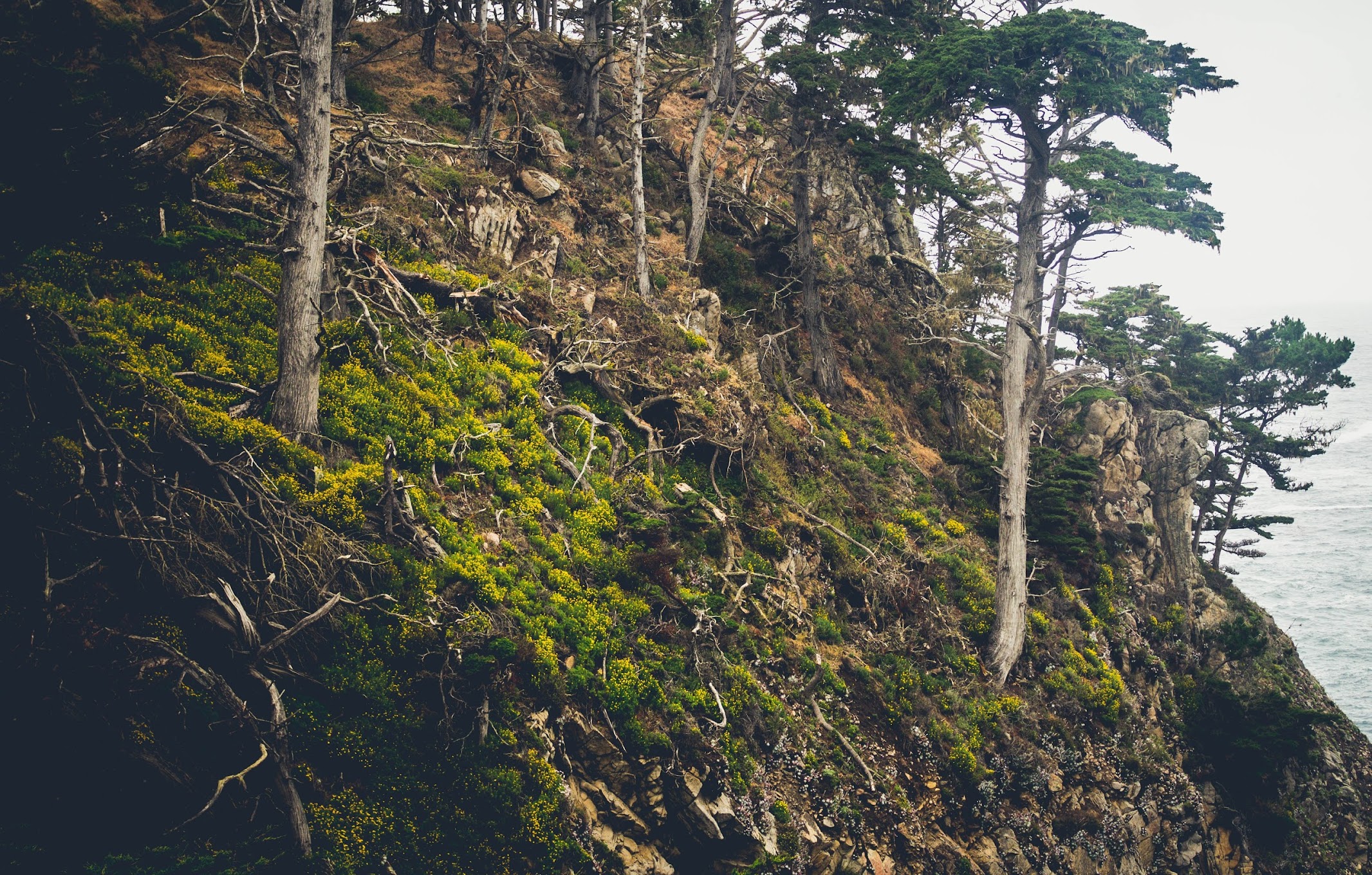 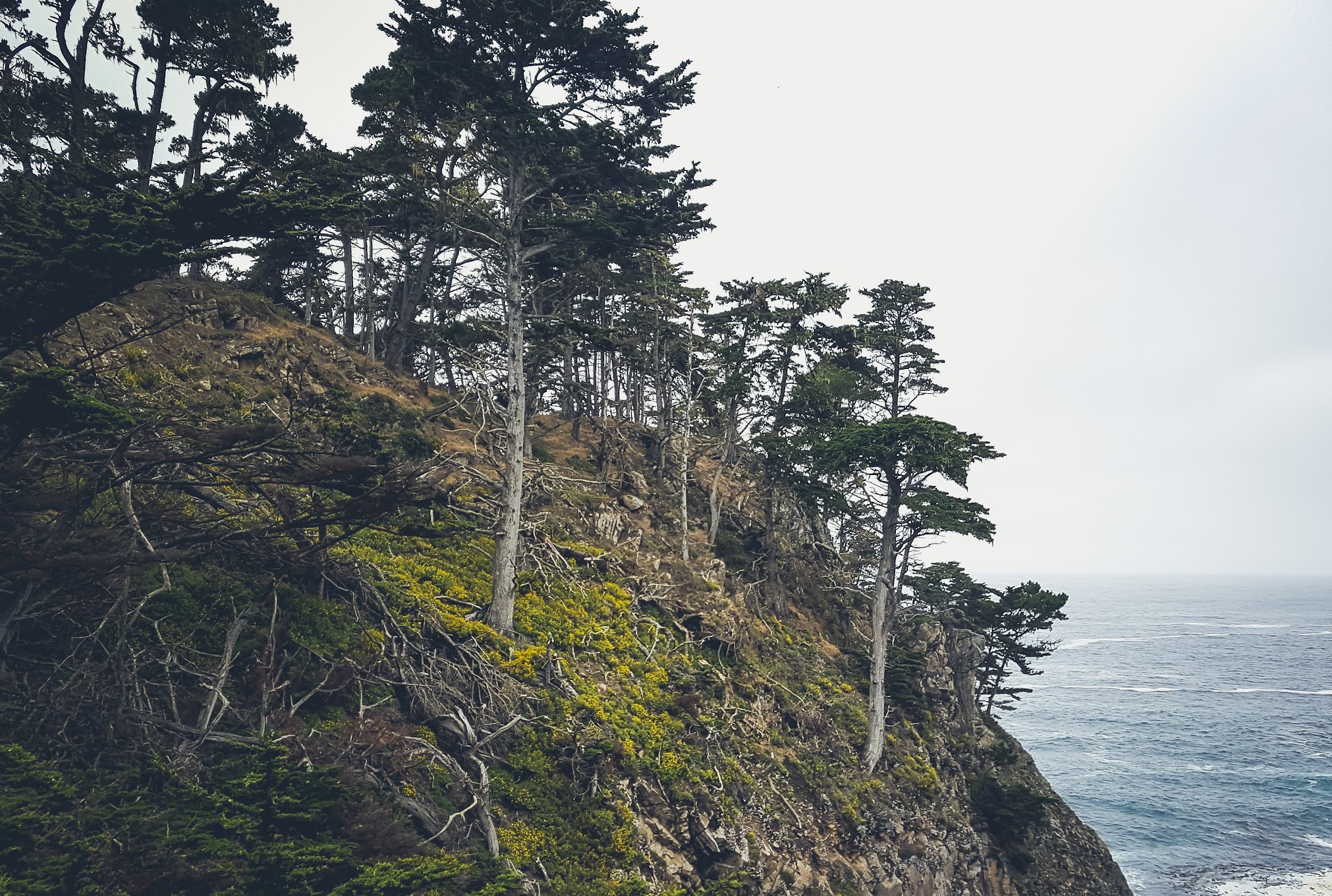 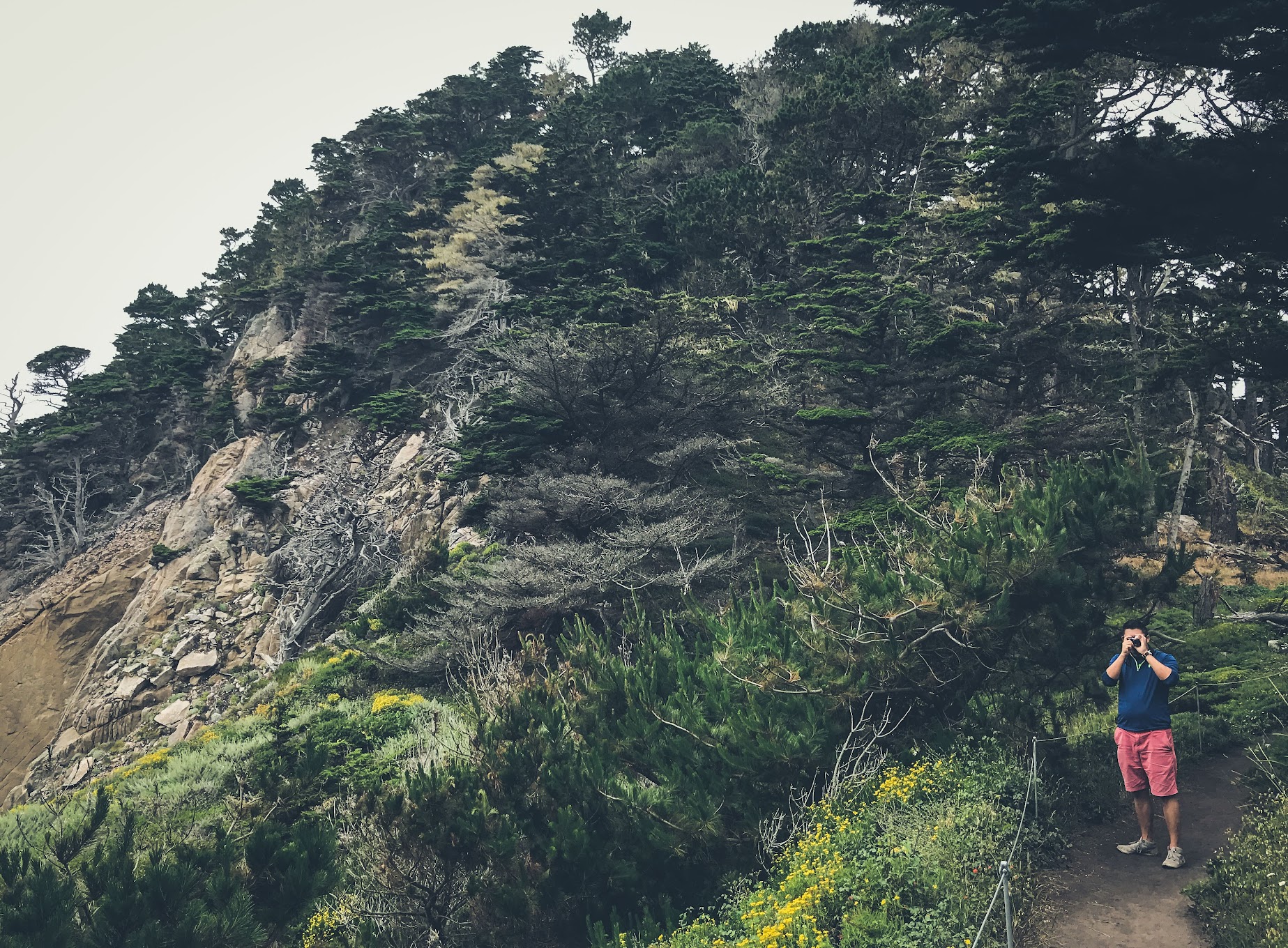 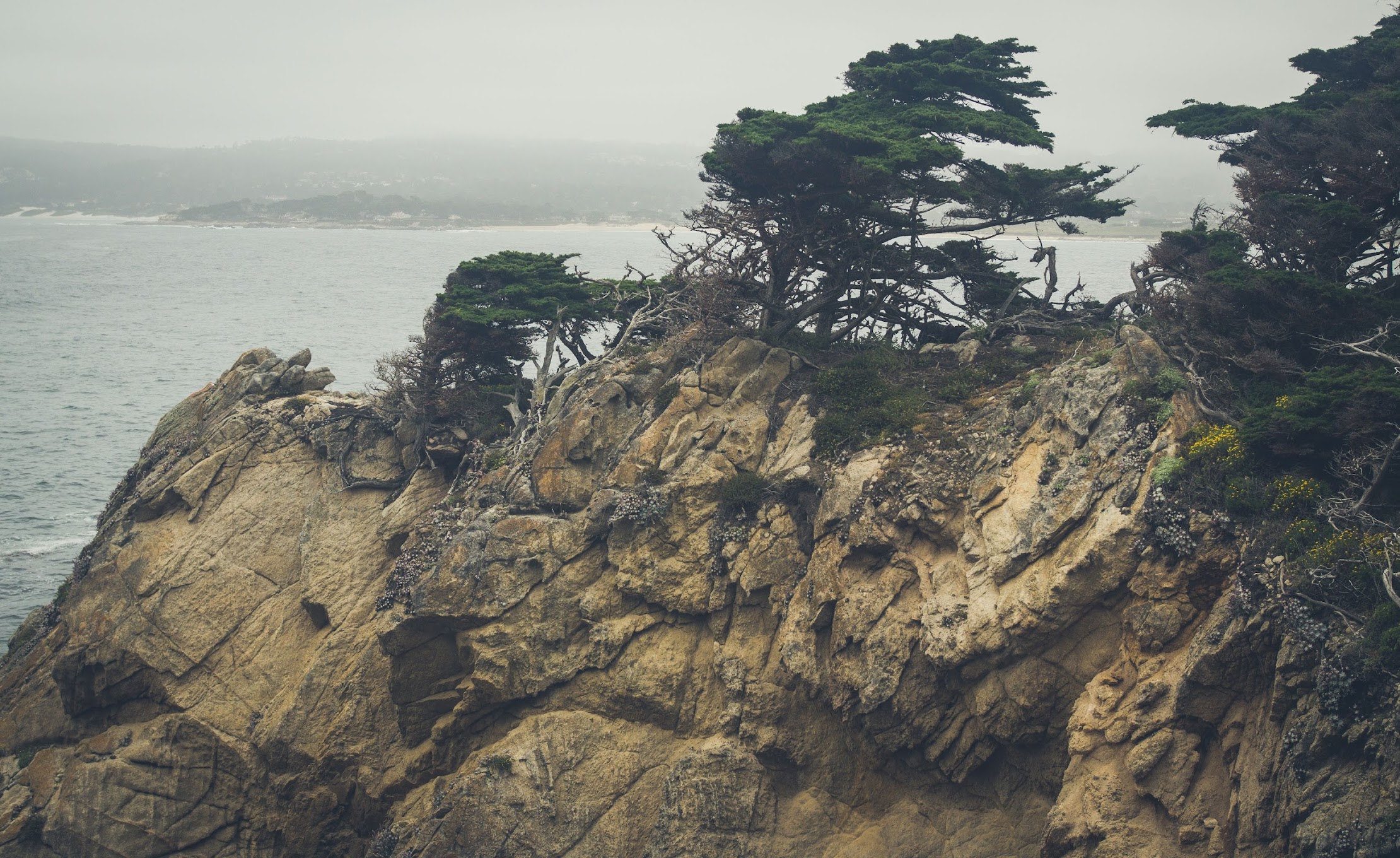 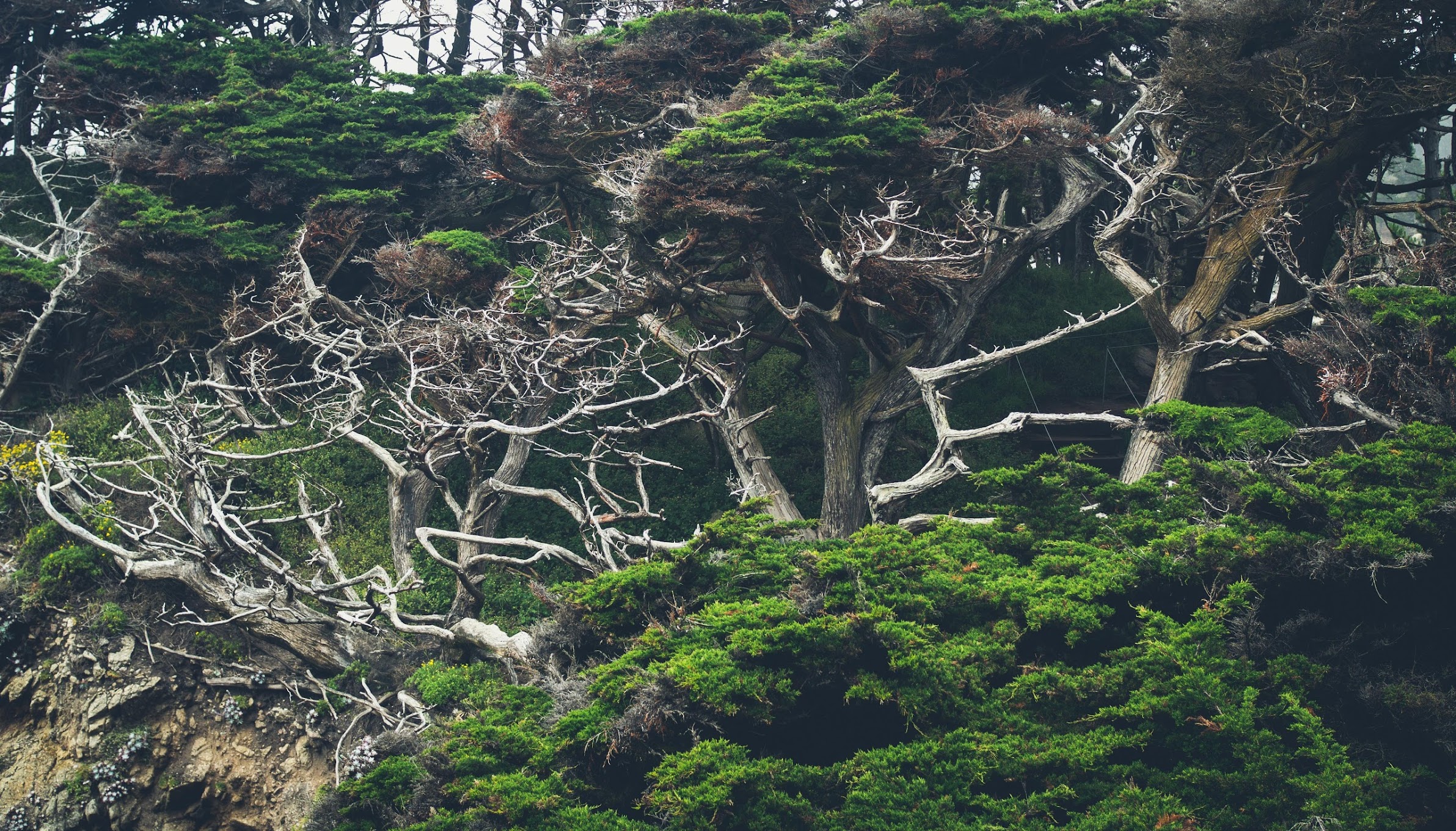 The Bird Island Trail was an afterthought for us – just something to do if we had a little bit of time left after doing everything else we had on our list. Our mid-afternoon arrival didn’t leave us with a whole lot of time before the park closed in the evening, so our priorities at Point Lobos were elsewhere. Thankfully, we did end up having some time left over in the early evening to make it out to this part of the reserve for one last hike. The trail is short, but it’s a beauty – the blue waters of China Cove, the sandy canvas of Gibson’s Beach, and the wildflower crowns of Pelican Point. The story behind the trail name, however, lies beyond Pelican Point, on a tiny, island teeming with the local avian wildlife. Bird Island, an otherwise inhospitable rock in the ocean, is home to flocks of cormorants, night herons, and western gulls, clinging onto windswept hillsides as the cold Pacific roars below. Hikers do not have access to this island – a very good thing – but there are observation platforms on Pelican Point that are plenty close enough. 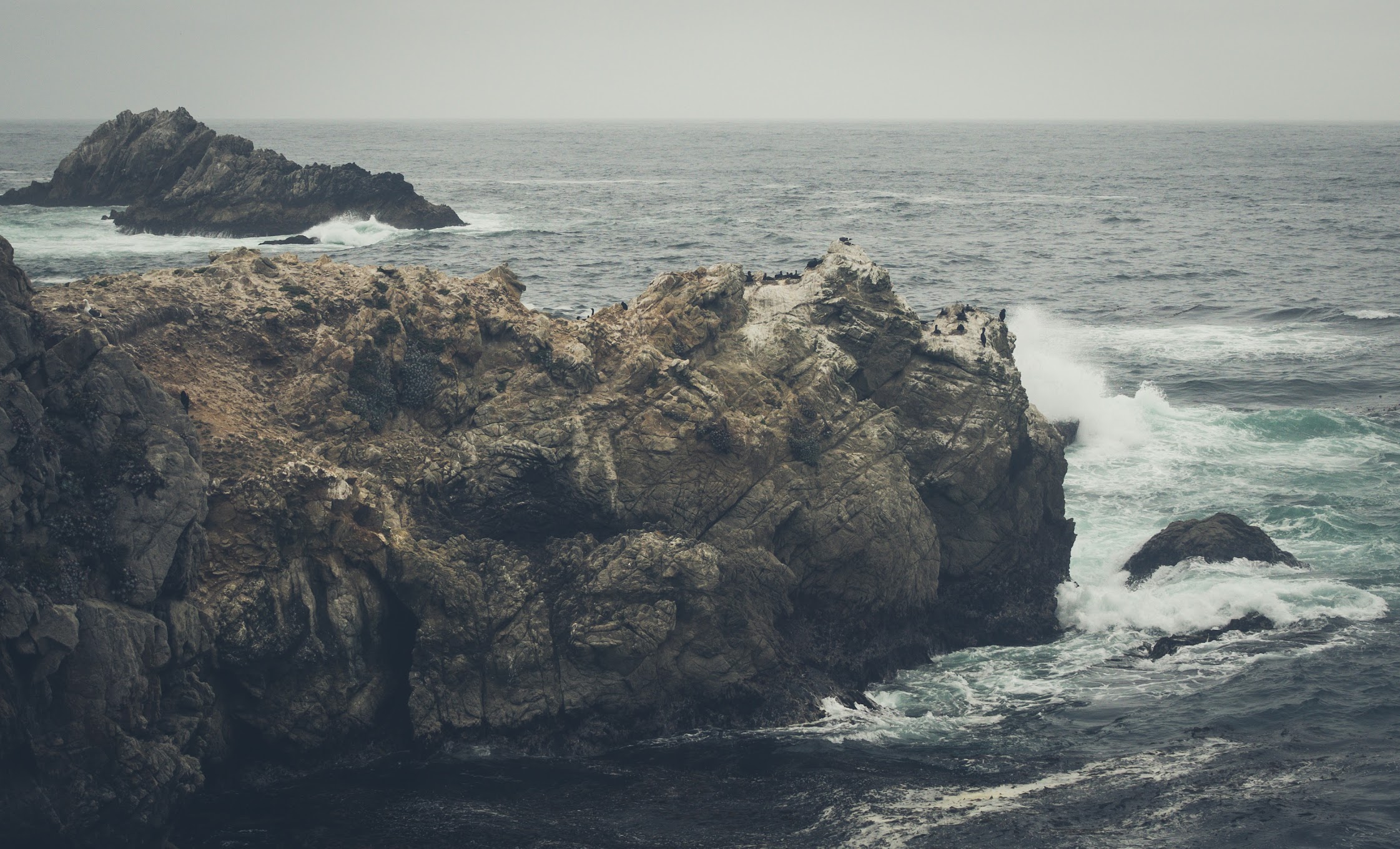 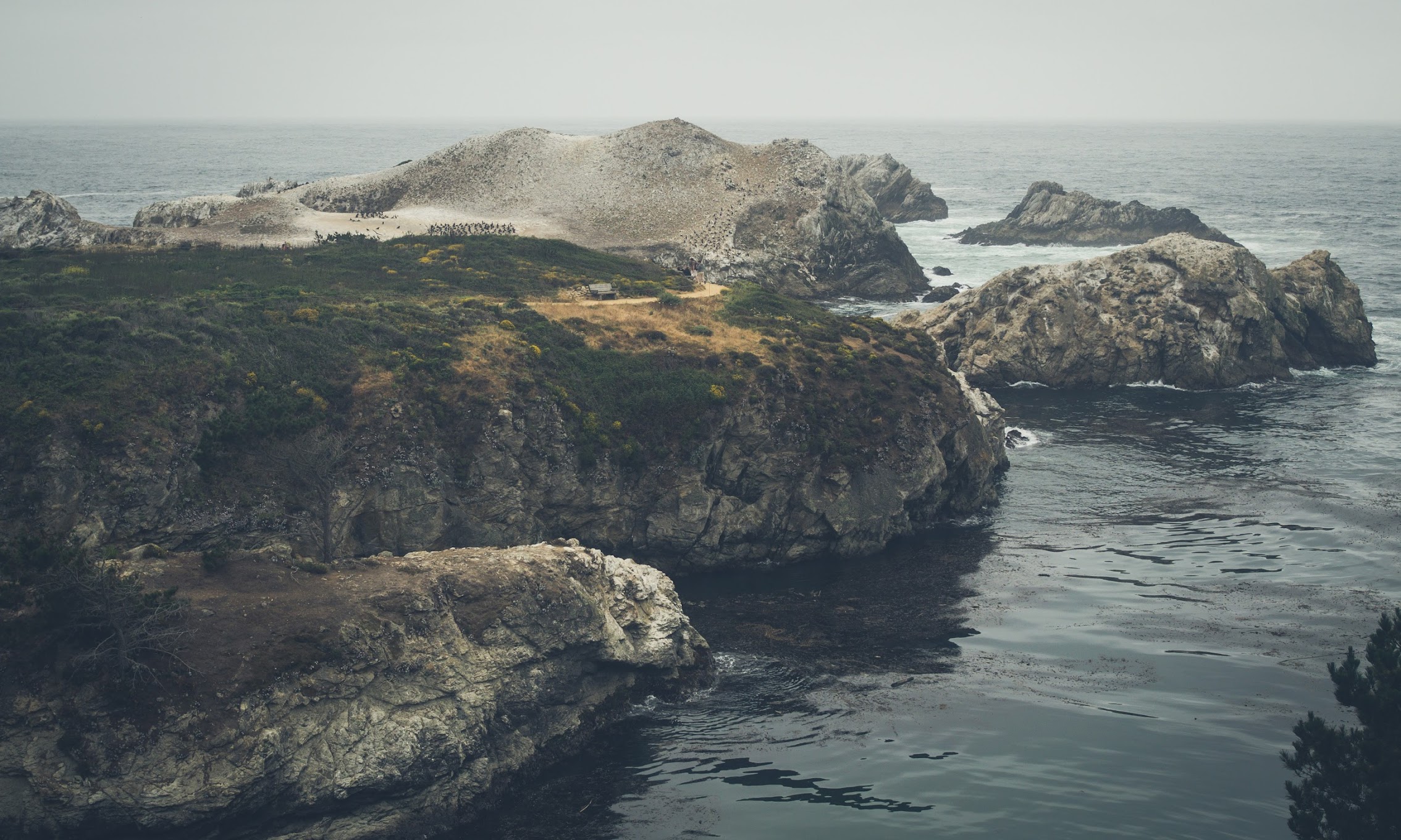 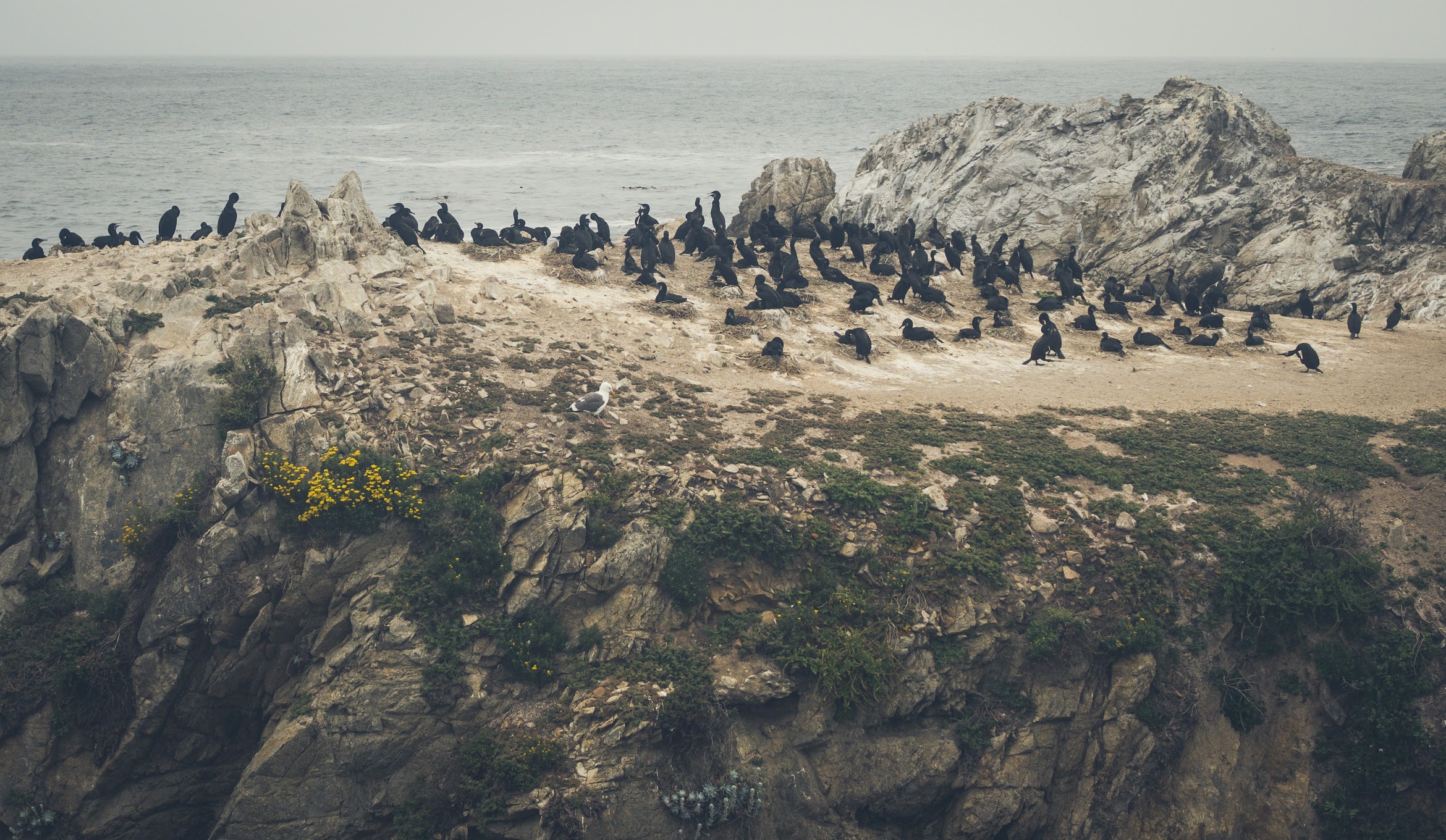 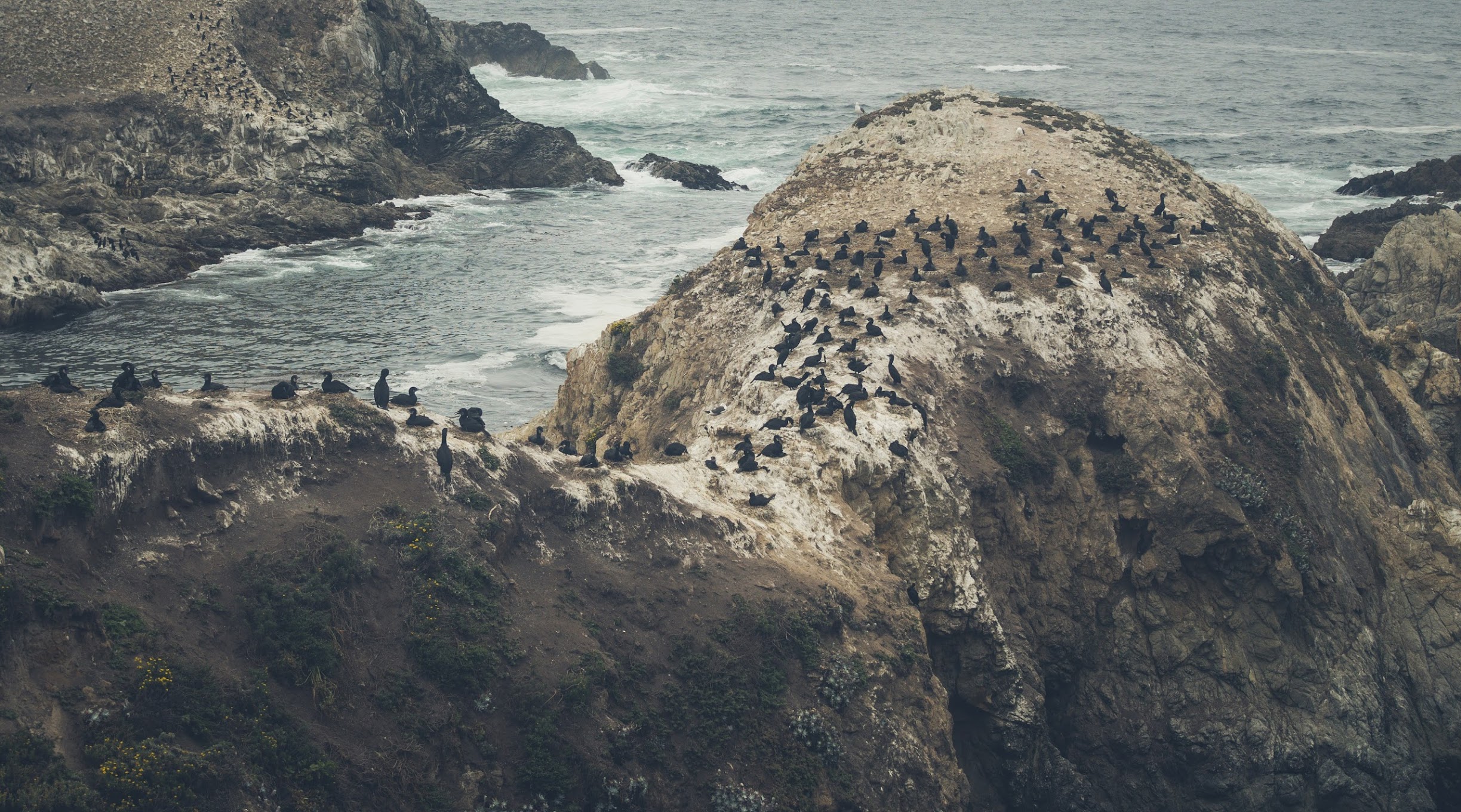 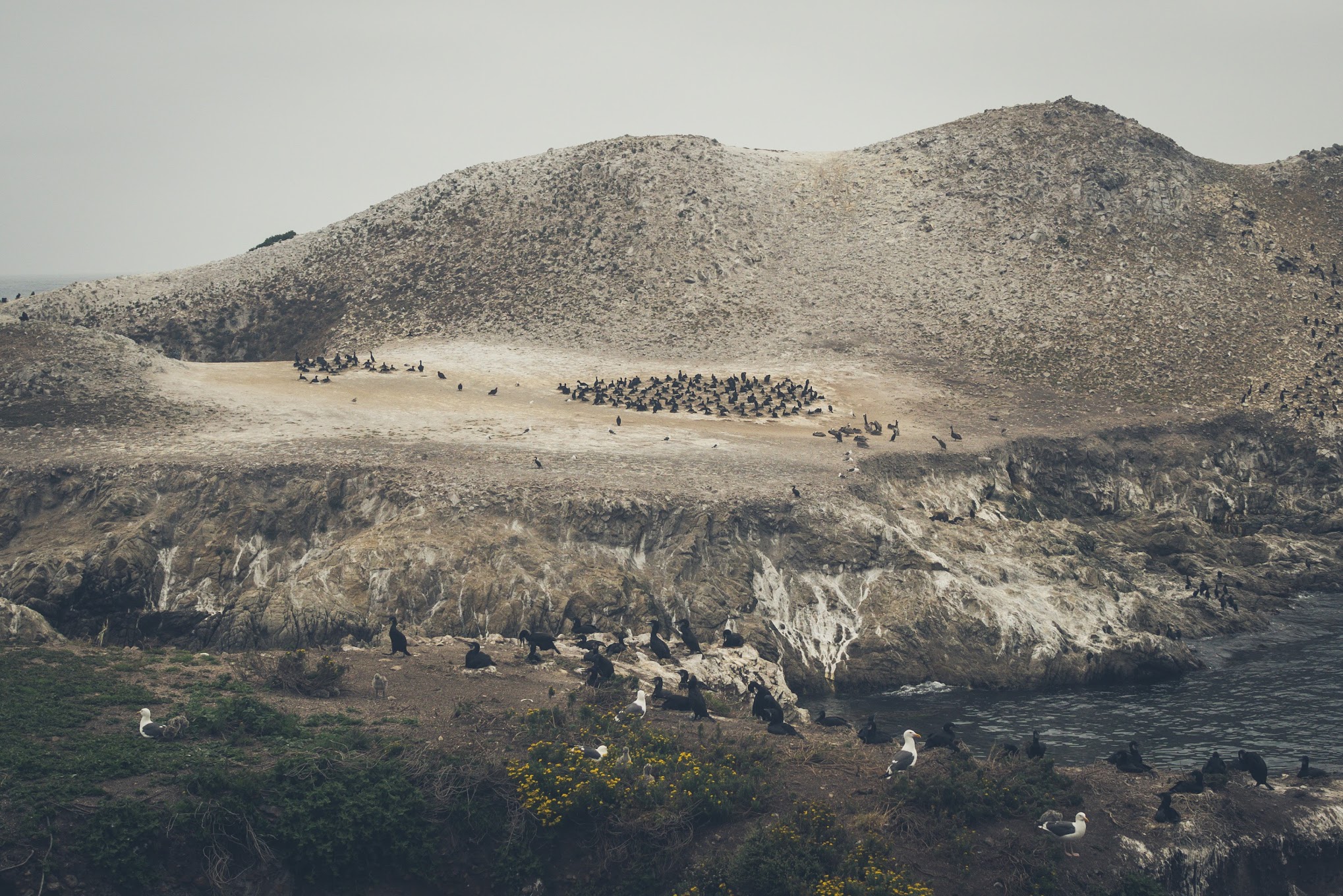 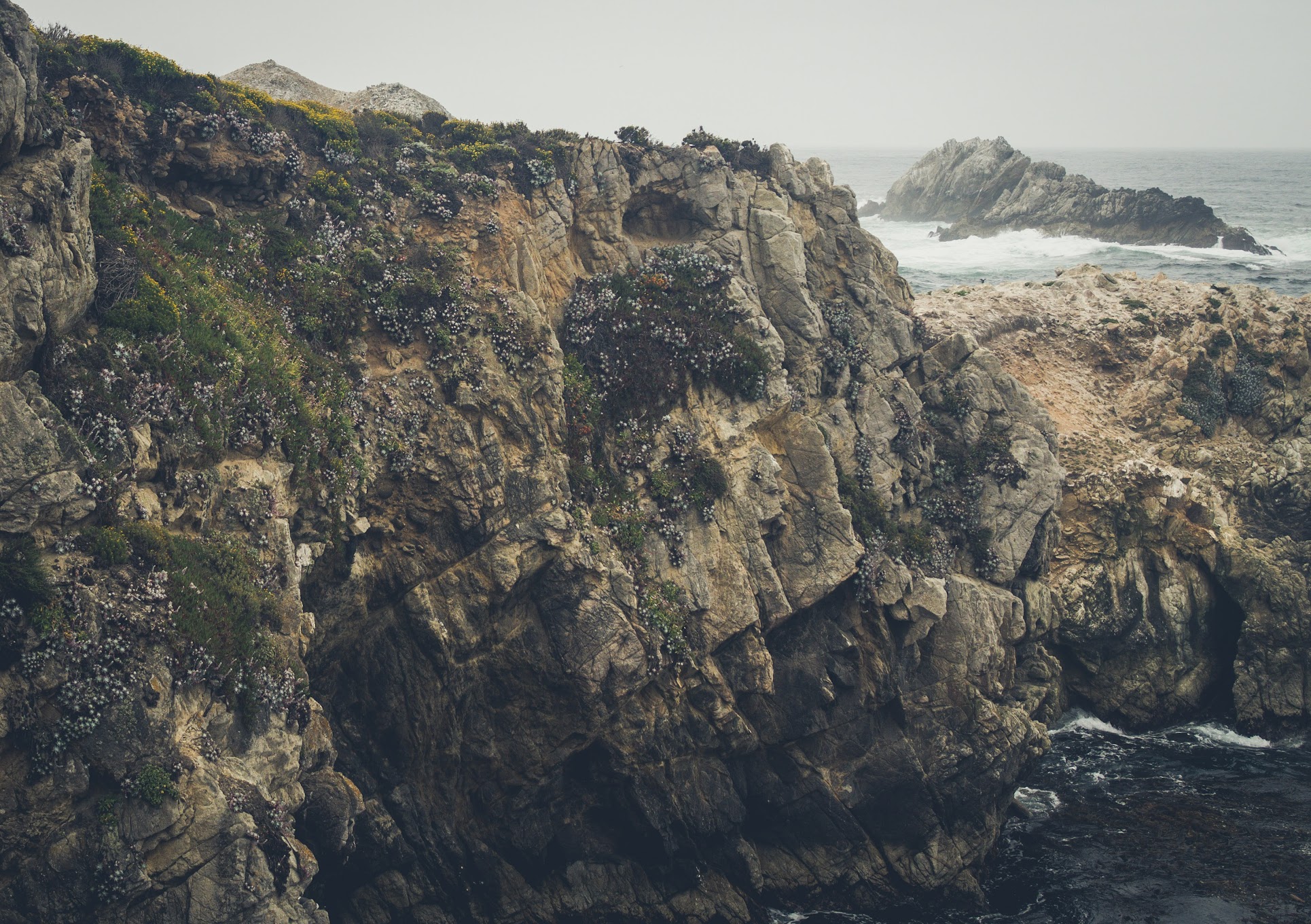 After wrapping up our afternoon at Point Lobos Natural Reserve, we made the short drive up to Carmel-by-the-Sea, a fairytale seaside town that once had Clint Eastwood as mayor. We had dinner at Cantinetta Luca, an Italian restaurant on Dolores Street, splitting the filet mignon and the tagliatelle alla bolognese – both were excellent, though the price is no joke. Our original idea was to stick around town and catch the sunset on Carmel Beach after dinner, but we saw nothing but fog and grey ocean as far as the eye could see, and the chilly weather didn’t do much to convince us to stay. After ten minutes shivering on the beach, we cut our losses and made our way back to the car. Two hours later, we were pulling into the driveway of Ashley’s relatives’ house in Fremont, getting some much needed rest and hospitality before starting the Bay Area leg of our holiday. 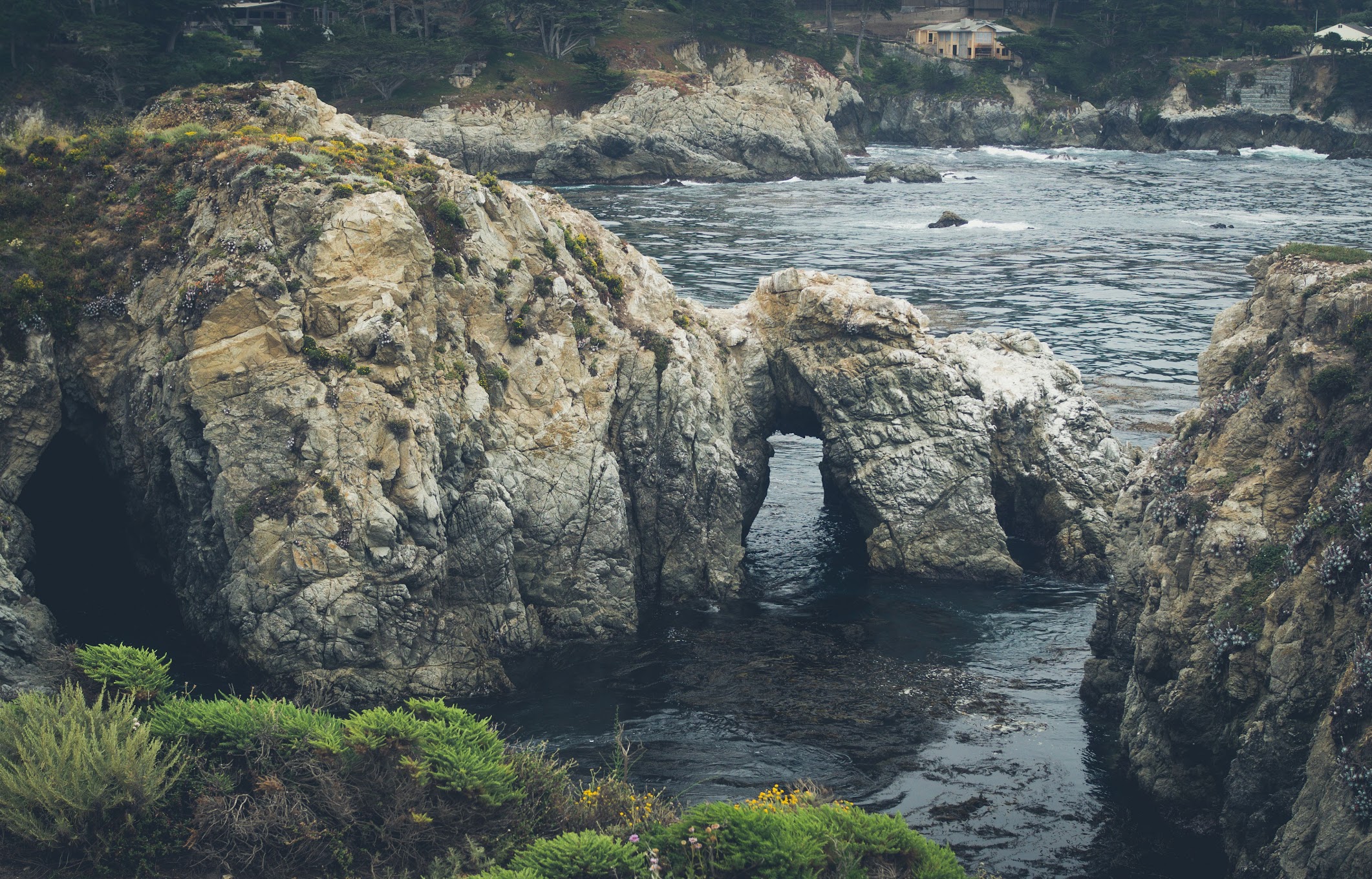