I’ve been living in Hong Kong for over ten years now, and escaping winter weather – and all of the drudgery that comes with it – was a major factor behind the move. No more waking up early to shovel the driveway,  no more scraping the ice off the car windshield, no more kicking at the dirty snow packed behind the tires, no more sitting in a freezing car waiting for it to warm up, no more navigating icy roads and reckless drivers, etc. And it’s mostly been a net positive, weather-wise, since the move, though the sticky hot summers in Asia take some getting used to, and it actually can get a bit chilly for a few days in Hong Kong.

One major drawback of living in a city with no snow, however, is that Christmases here just don’t feel the same as back home. There’s a general festiveness that I think is just reflective of people here just liking to celebrate holidays, and my church has a lot of Brits that usually put in a lot of effort to recreate the holiday atmosphere in the weeks leading up to Christmas, but there’s a bit of commercial cynicism behind much of what happens in Hong Kong and it can be hard to feel that communal wonder and joy that I associate so much with the holiday season.

So once we decided to go to Vienna for Christmas, one of our big priorities was to check out as many Christmas markets as we could. Back in 2013 I had my first experience with Christmas markets in Germany and France when Ashley and I traveled with a few friends to Europe, and I had a great time. Beyond the tasty ciders and roasted meats, there was a nice kind of depth of feeling and familiarity to the markets, a sense that they’ve been going on for generations and will continue on for generations more, that the same families have been attending and hosting and serving at these markets year after year after year – Christmas as an institution, and not just a reason for general merriment.

The first Christmas market we went to was the market around St. Stephen’s Cathedral, in the middle of the old town. It wasn’t on our list of markets, but the cathedral itself is a major landmark and you basically have to walk through the market to get to the front door. It wasn’t a very big market, just a double row of stalls snaking around the church building, but it was a nice preview of things to come. We also got a festive boot-shaped mug!

This was probably the most picturesque of the markets we went to in Vienna. Located in a large square on the Ringstrasse between the impressive Naturhistorisches and Kunsthistorisches museum buildings, and centred around a formidable statue of Empress Maria Theresa, the market filled up the park pathways and spilled out onto the surrounding sidewalks. We’d spent the earlier part of the day in the Kunsthistorisches Museum checking out its collection of classical and Egyptian antiquities, and when we emerged from the building in the late afternoon there was already a sizeable crowd walking the festive laneways. It wasn’t long before we started getting some really nice golden lighting as the setting sun lit up the westward-facing facade of the art museum. The whole effect of the sunlit buildings, the towering statue of the empress, and the festive market stalls made for quite a nice scene, and there are some photos from here that I think captured that somewhat. 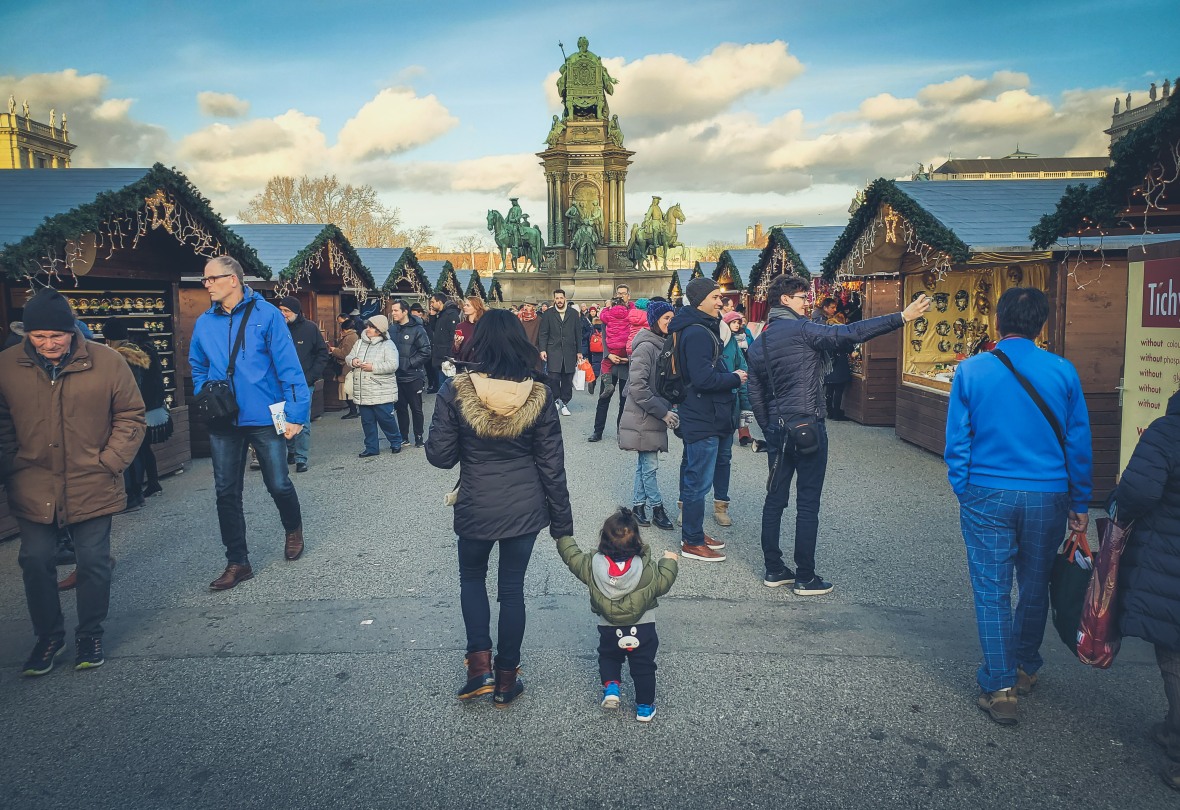 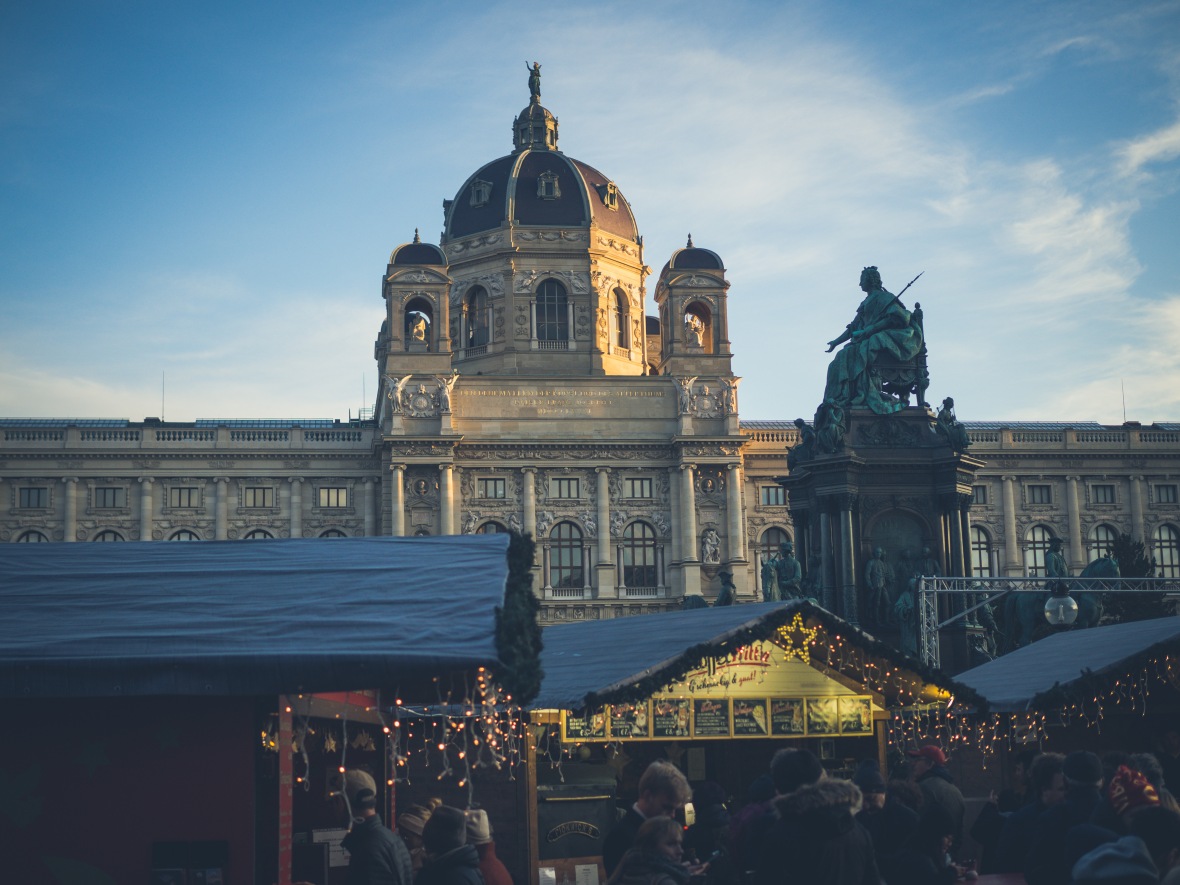 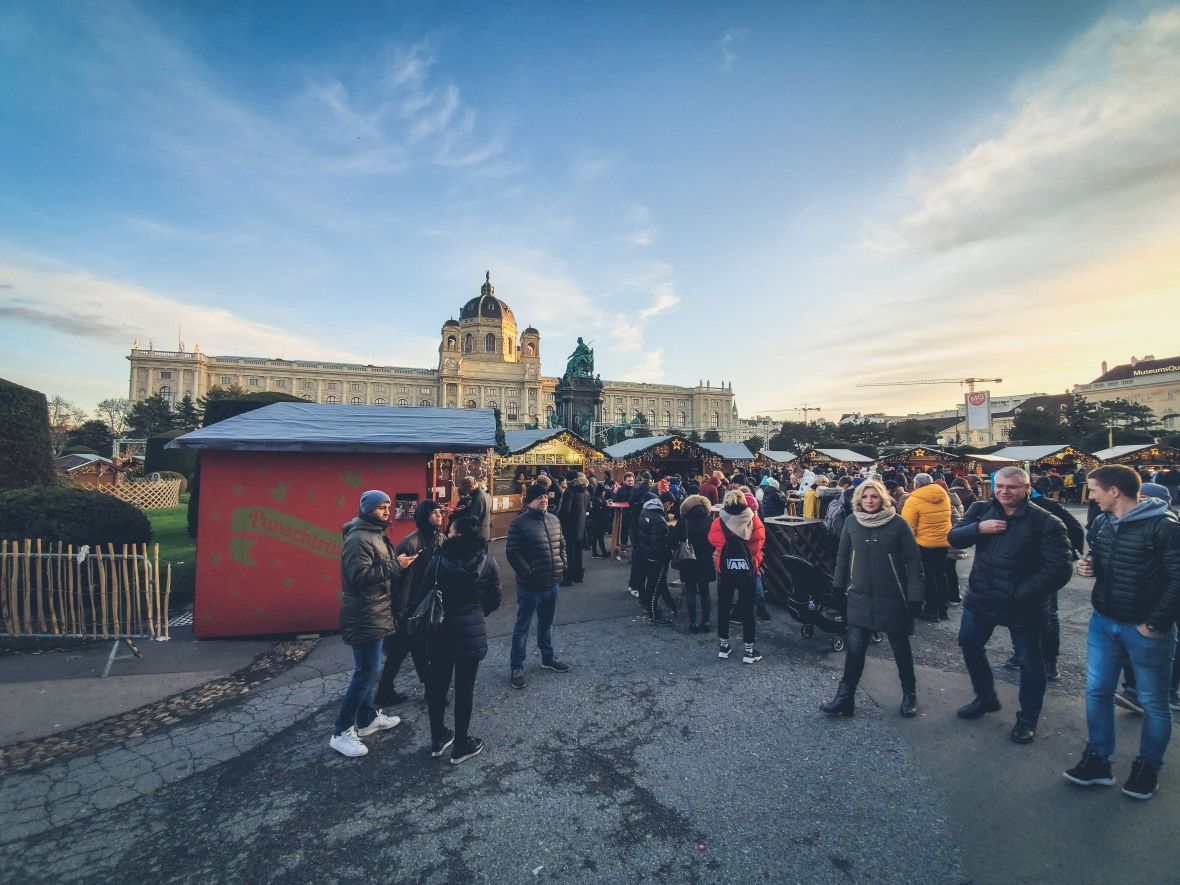 Ashley and I (and Miles) spent one of our days in Vienna at Schönbrunn Palace, the main summer residence of the Habsburgs before the imperial family collapsed in the wake of World War I. I’ll write more about the palace later, but every year a Christmas market pops up at the entrance court in late November, and this one probably had the most elegant/stylish atmosphere of the markets we attended. There was a stage set up by the big Christmas tree in the middle of the marketplace, and groups of musicians played holiday tunes while the crowd mingled in and around heated gazebos. Unlike some of the other markets, the stalls here were lined up along the edge of the courtyard, with a large open space in the middle, so it felt a little less crowded. There were also some kid-friendly stalls for Miles to entertain himself at, and his exuberant clapping by the music stage drew some friendly cries of “bravo!” from a family of Italians nearby.

Okay. This was my favourite market in Vienna. The Rathausplatz Christmas Market is the city’s biggest, with about 150 stalls filling the square in front of the neo-Gothic city hall building. There were two main market lanes where visitors could enter Rathausplatz, and then about halfway in the lanes branched off and curved around to fill up the space directly in front of the Rathaus. What I enjoyed about the Rathausplatz Christmas Market was the communal aspect of Christmas that I mentioned at the beginning of this post – everywhere you looked there were people shopping at arts and crafts stalls, gathered around tables sipping mulled wine, or ducking into hidden corners to chow down on pastries. The same elements were present at the other markets, but the sheer size of this one made it feel like a whole village was packed into the square. It may not have been the prettiest market, and it may not have had the most refined atmosphere, but it was everything else I was looking for in a Christmas market, and this is the one I’ll keep in mind should we ever find ourselves in Vienna over the winter holidays again. 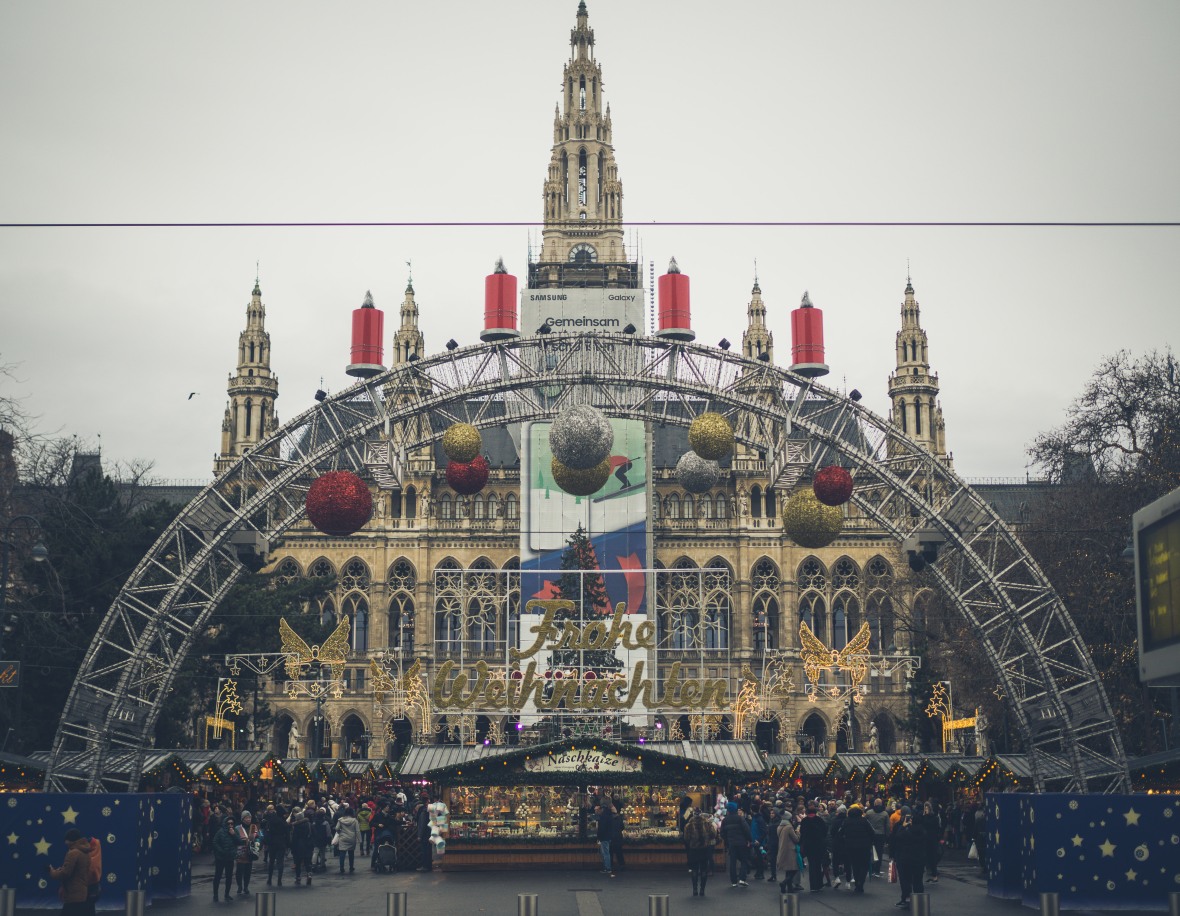 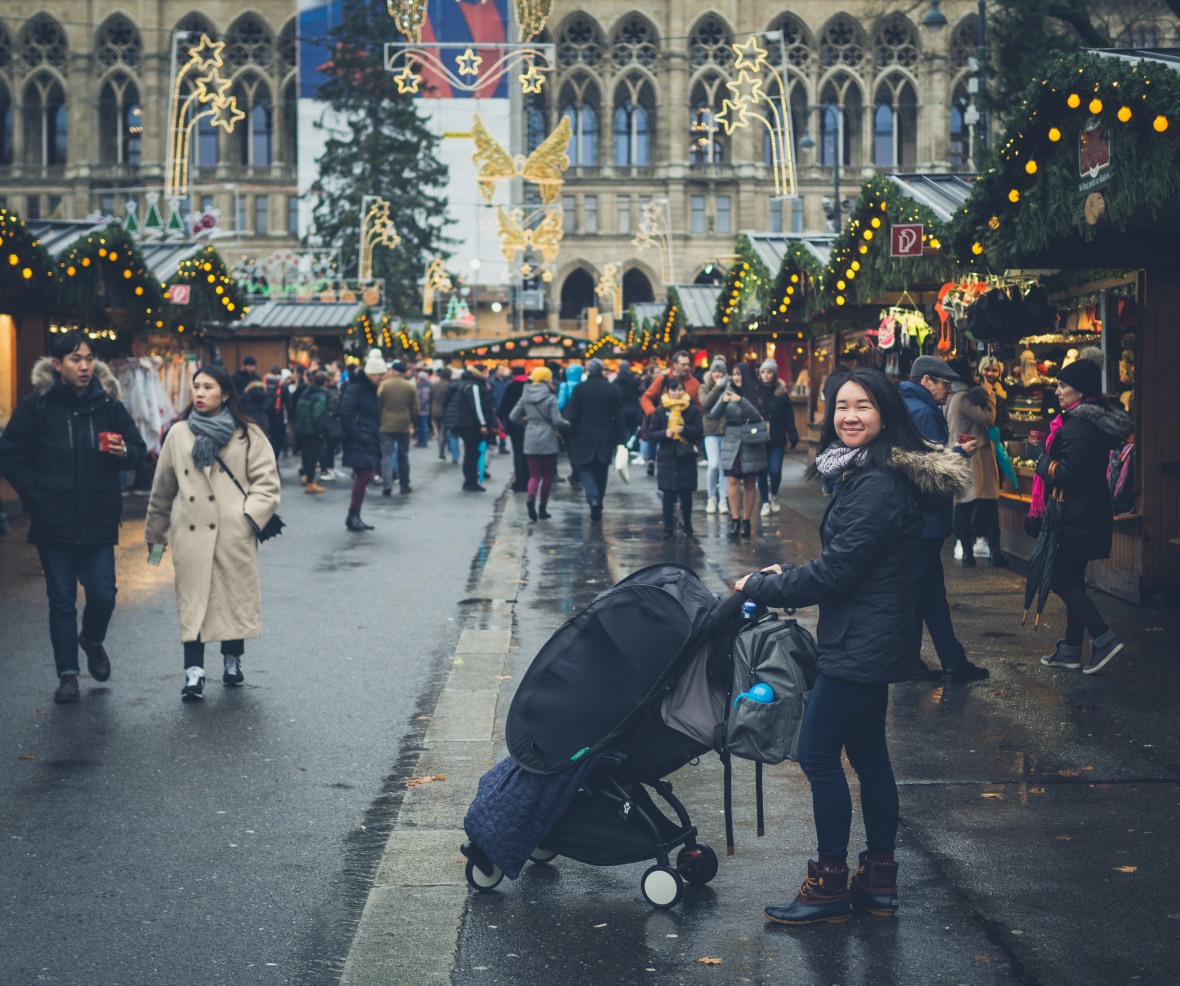 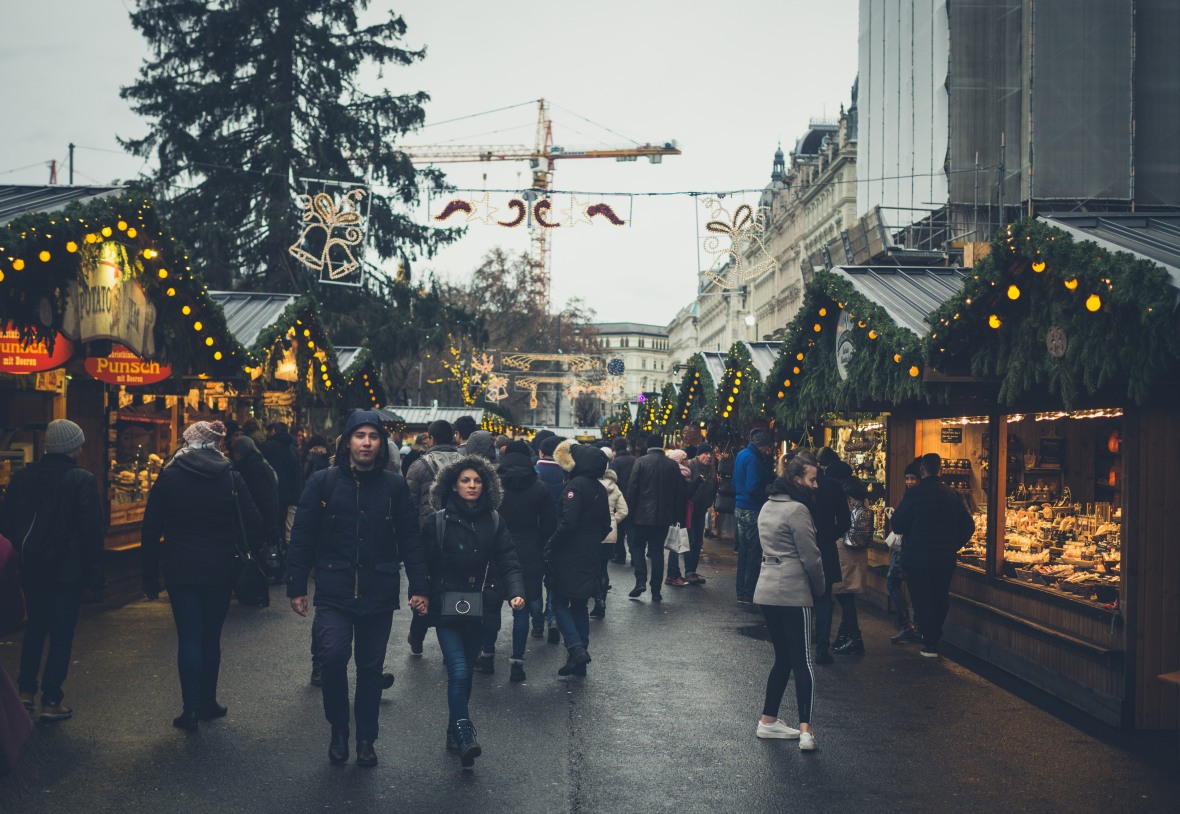 One last thing about the Christmas markets – we quickly learned that this was where we’d be getting our dinners after a chaotic attempt at a sit-down dinner with Miles on our second night in town. The combination of jet lag, a disrupted schedule, and just being out all day probably did a number on his emotions, and by dinner time his energy levels were all over the place. After we scrambled out of the schnitzel restaurant hanging onto random jackets and winter accoutrements, we decided we’d be better off eating at the markets instead. It ended up not being a bad option either – hot drinks, lots of sausages and hot soups, breads and pastries, and potato dishes galore. I’m actually not sure what we would have done if we had been in Vienna at any other time in the year. So we’d come to Vienna’s Christmas markets to soak in the atmosphere and recapture a little bit of the kind of Christmases we grew up with back in North America, but in the end it was all about Miles.