What I love about some of these old world cities are the origin stories, steeped in myth and pre-Christian folklore tradition. Rome was famously founded by the twin demigods Romulus and Remus, while ancient Byzantium, the precursor to modern Istanbul, was settled by Greek colonists ordered by the oracle at Delphi to build a city opposite the land of the blind. This was in reference to the already established city of Chalcedon on other side the Bosphorus, whose founders failed to see the more strategically located and fertile peninsula that would go on to become the capital of three successive empires. Prague’s origin story is no less wonderful and awesome – Libuše, the legendary queen and prophetess, founder of the Přemyslid dynasty that ruled Bohemia and surrounding lands from the 9th Century to the beginning of the 14th Century, found herself on a rocky cliff overlooking the Vltava one day. The youngest of three daughters, themselves known for their abilities in healing and magic, Libuše gazed upon the land and prophesied about a great city whose glory would touch the stars, after which she ordered the construction of a castle and a city on that site. Fast forward about a millennium or so and it’s not hard to see what the young prophetess foretold about the city that would become Prague.

On our last full day in town, we decided to visit the Old Town Hall on the southwest corner of Old Town Square. It’s fragmented construction timeline, done through the gradual acquisitions and absorptions of surrounding buildings, gives it a sort of piecemeal appearance, but its massive tower, with its commanding view of the surrounding cityscape, absolutely dominates the town hall structure, and that was our aim that morning. Up to that point we had avoided anything that involved waiting in line because of Miles, but we figured we had plenty of time to kill before his early lunch feeding time. All was well as we bought our tickets and took the elevator up to the top – and then it wasn’t so well.

The top of the tower has an enclosed portion where tourists coming up through the elevator or the staircase are meant to wait in a line before heading out to the balcony section that goes around the tower. That’s all well and good, but they seemed to be having issues with controlling the flow of people from one section to the next, which resulted in more and more people piling into the increasingly crowded tower room while those on the balcony seemingly had no idea of the chaos piling up behind them. There were a couple of tower staff that would bang on the windows to get the balcony crowd moving, but it didn’t really do much. So we waited and hoped Miles would be able to hold out until it was our turn to head out, and he mostly did. It was such a long wait that even I was losing a bit of patience, to be honest. When we finally got out onto the balcony, we thought we’d be able to just calmly follow along behind the people in front of us – the path was too narrow for passing anyway, or so we thought. In the face of clear evidence to the contrary, some tower visitors thought it’d be reasonable to squeeze their way past in the already narrow balcony, only to create and contribute to a larger logjam of people just around the corner. This all took away from the tower experience.

What we did get were some amazing views of the city – the old town, Malá Strana, Prague Castle, and beyond. Looking back at these photos from the tower, I definitely see a glimpse of Libuše’s 9th Century prophecy, with the city’s towers and steeples, castles and churches, reaching up to touch glory. It was a marvelous sight. So was the tower visit worth it in the end? I want to say yes, though I think I was this close to turning around and heading back to the ground level multiple times throughout our wait. Obviously having an increasingly emotional baby with us added to the state of things, but that’s the perspective I’m writing from these days after all. Come for the views, stay for the poorly managed traffic management. 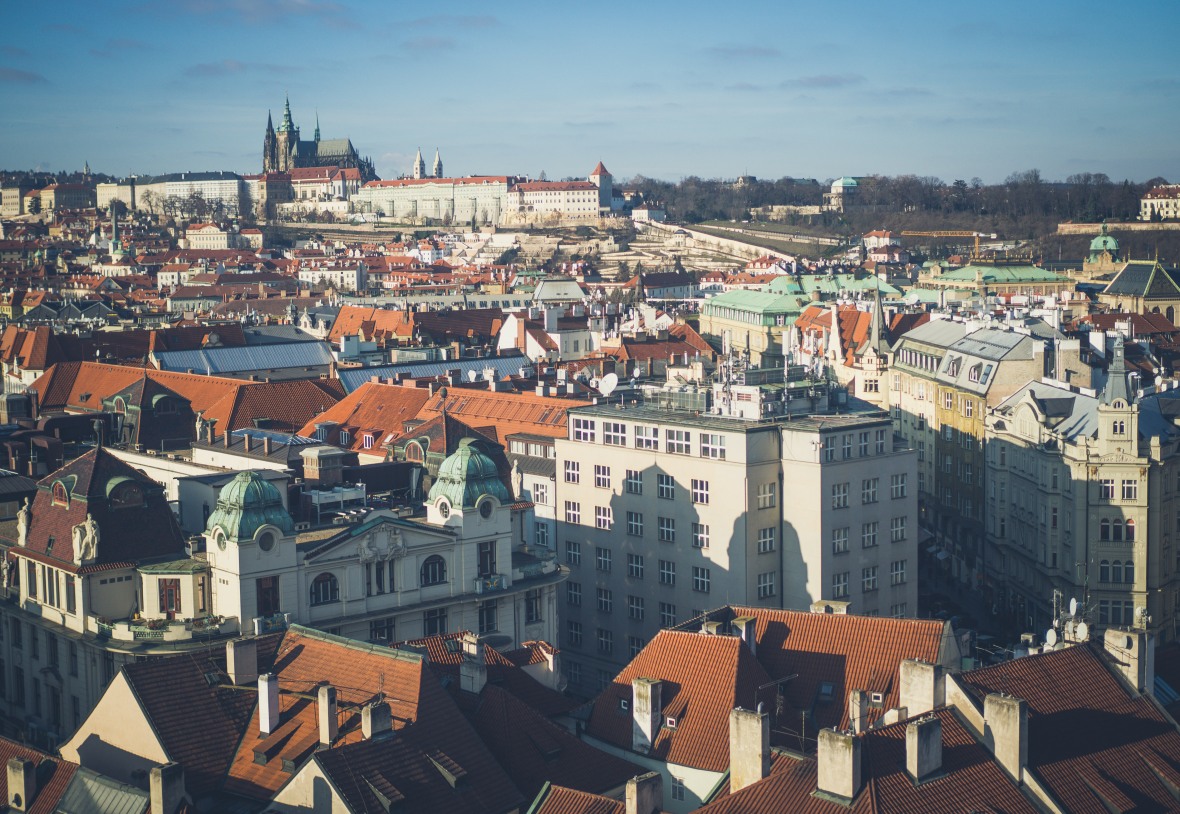 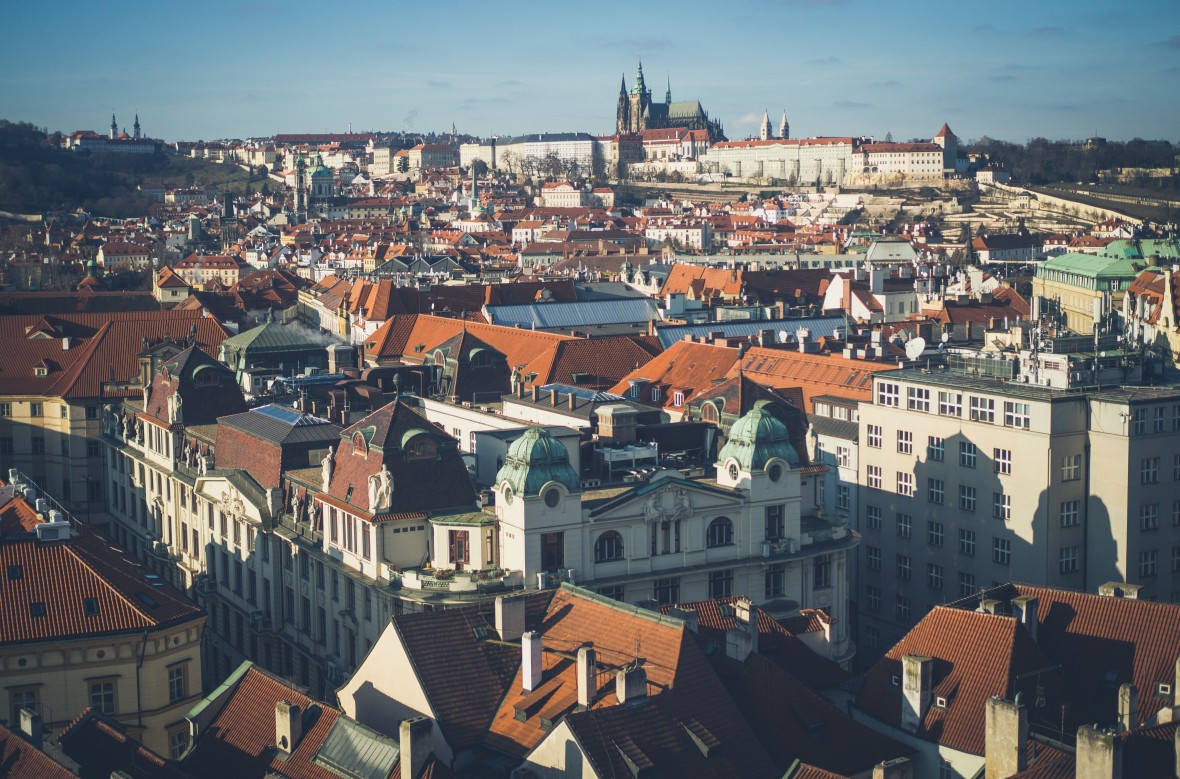 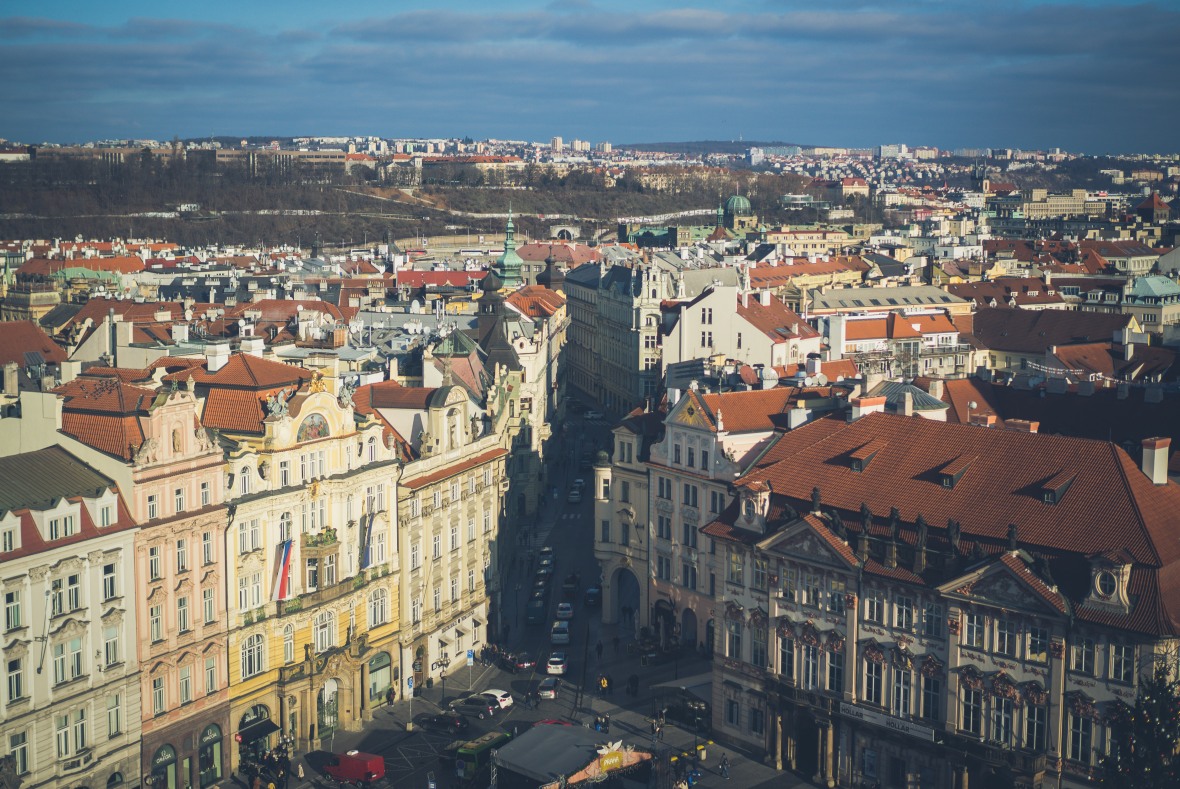 I wrote about Malá Strana in my previous post, but one thing I didn’t include was our visit to Prague Castle. The complex is built on a hill overlooking the the city, and the extensive grounds are free of charge for tourists to just come in and walk around. Getting to the main entrance is a bit of an ordeal though, mostly for parents of young children, ourselves included. The walkway from street level up the hill consists of a series of inclines and staircases, which is a bit inconvenient if you have a kid and a stroller with you. We were relatively fine because our stroller was on the lighter side, but we saw some families with multiple kids and strollers struggling to get up or down the hill with sanity intact.

Once at the top, though, the views from the castle’s plateau were stellar, and it seemed like there were as many people lining up to get into the castle as there were to take photos from a particularly photogenic viewpoint facing the city below. The castle itself didn’t really feel like a castle, I think mostly because everything is so spread out and there didn’t seem to be a unifying castle-like structure, if that makes sense. St. Vitus Cathedral is probably the most prominent building in the complex, but it’s a beauty – all towers, buttresses, arches, and glass, shining in the late afternoon sun. There was a small Christmas market in front of the Basilica of St. George as well, which provided some much-needed hot apple cider. After an hour or so, though, we’d pretty much exhausted all the free areas of the castle, and we began making our way back down the hillside staircase, through the streets of Malá Strana, across the Charles Bridge, and once again into Prague’s beautiful old town. 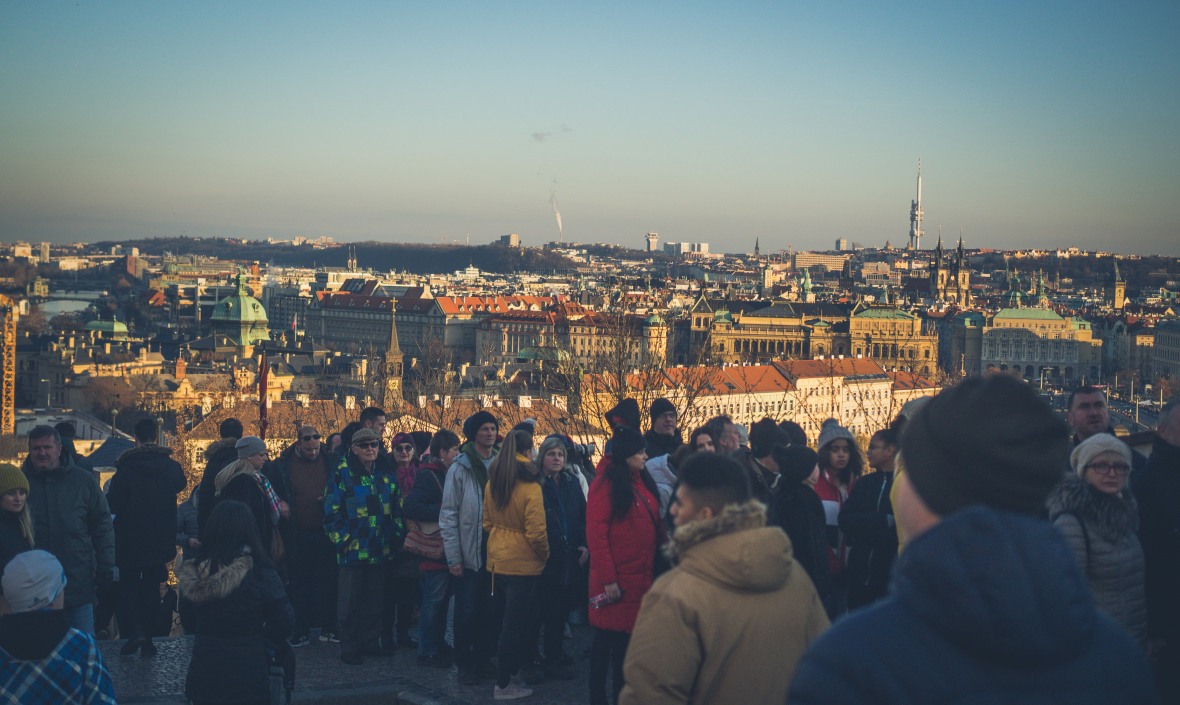 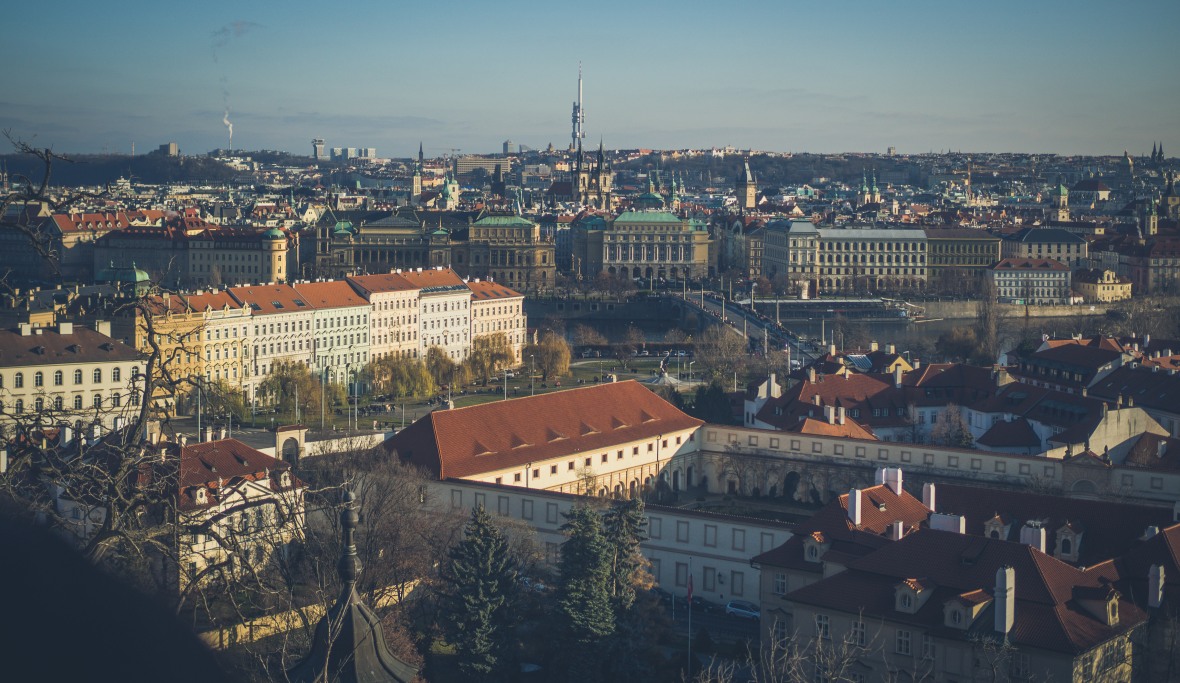 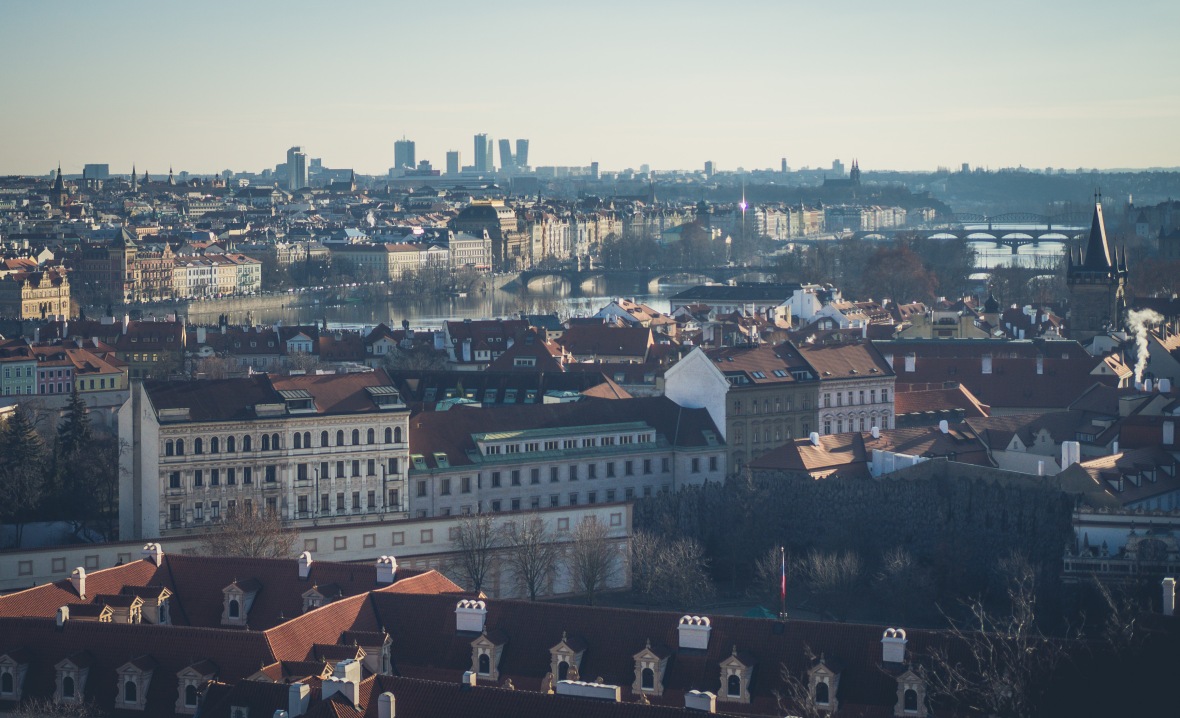 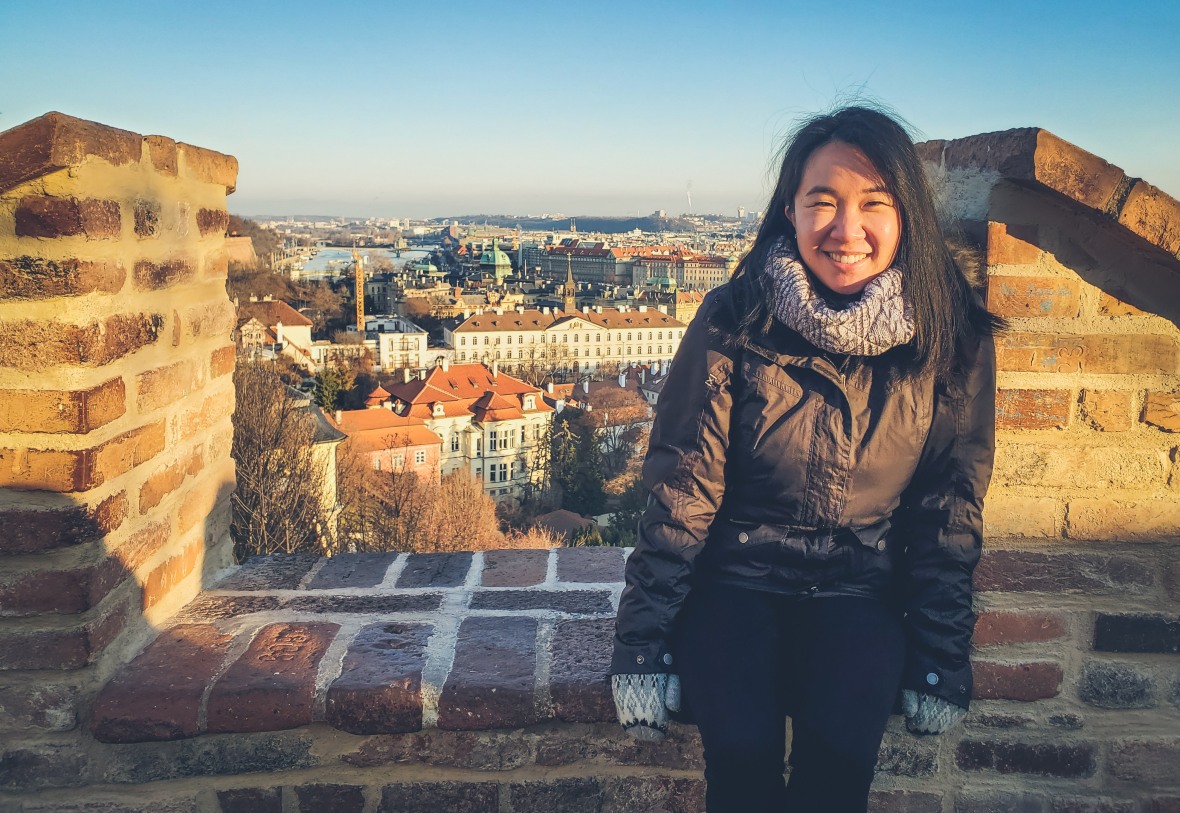 If I were to compare the Christmas markets in Vienna versus the Christmas markets in Prague, I’d give the Viennese markets a higher score on average. Each of the markets we went to in Vienna held their own and had a healthy variety of food, drink, arts and crafts, and other souvenirs. In Prague, most of the markets we saw were smaller and less elaborate than the ones in Vienna, and, though they were still nice in their own way, there didn’t seem to be as much of a holiday atmosphere. That being said, we were also in Vienna during Christmas, so that definitely helped with setting the mood.

One major exception to the Prague markets was the Old Town Square Christmas Market, a massive warren of stalls and holiday installations that almost seemed a city unto its own. I don’t know what the old town square is like during non-Christmas periods, but it felt like the market was the epicentre of all activities in the old town, like it had a special gravity that drew everybody in deeper and deeper. Every day we’d stop by the market on the way to somewhere else, picking up a quick snack or a hot drink on the go, and every evening we’d end up back here to get dinner and soak in the Christmas cheer.

There was a massive Christmas tree at one end of the market, beautifully decorated from top to bottom, and at night it would light up like a beacon in the dark. I loved standing there by the tree and watching fellow market-goers gazing up at its heights with just an earnest appreciation of the tree and its decorations. No cynicism here about the commercialisation of Christmas, or being too grown-up to express wonder and joy openly – person after person, whether by themselves or in a group, took a moment to pause and smile at the tree, and without even knowing it they contributed in their own way to the atmosphere of the market. There were a lot of things I liked about this market – the tasty drinks, the grilled cheese sandwiches, the trdelnik cakes, and the amazing roast hams – but I think the tree and its gazers were my favourite part. 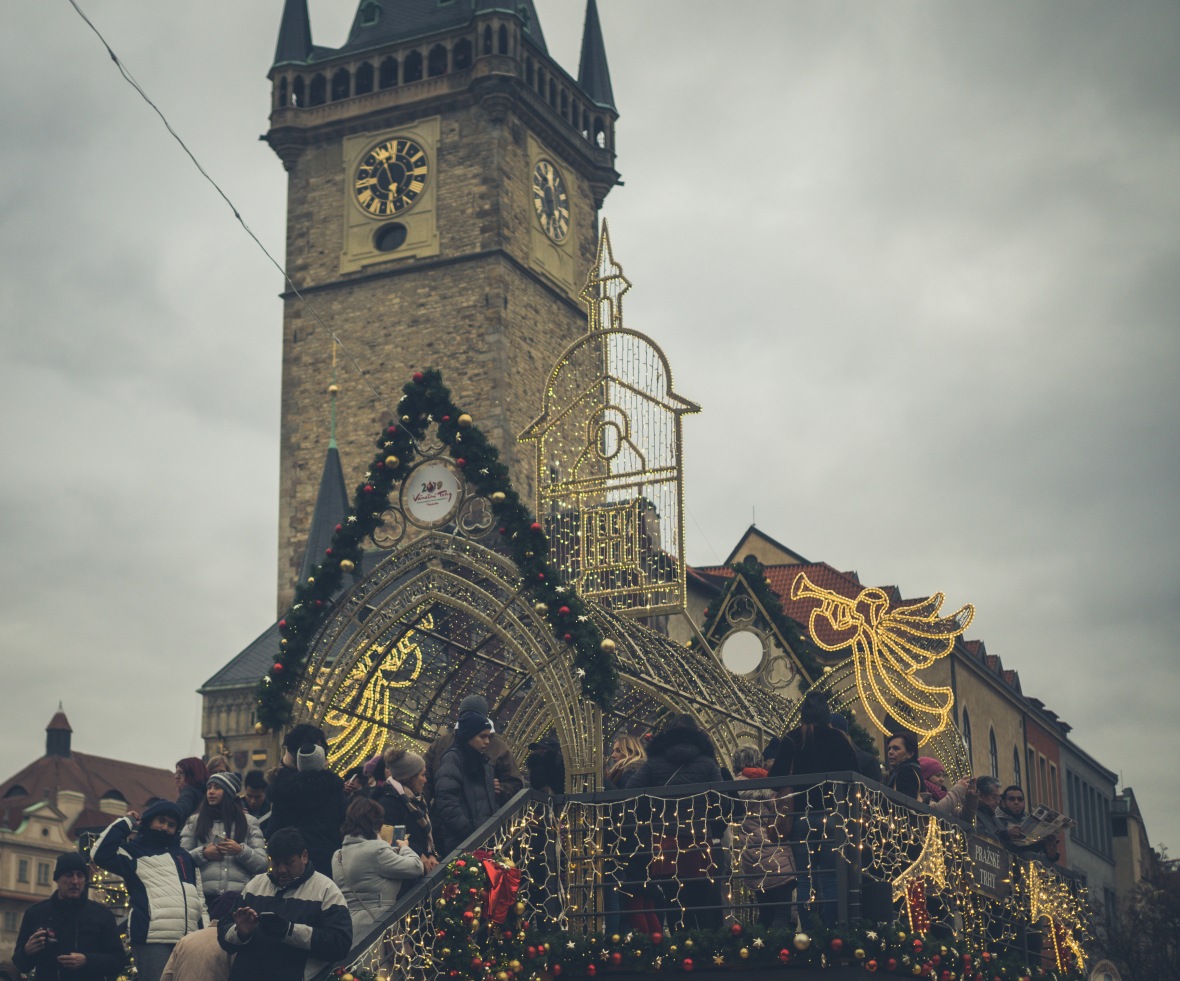 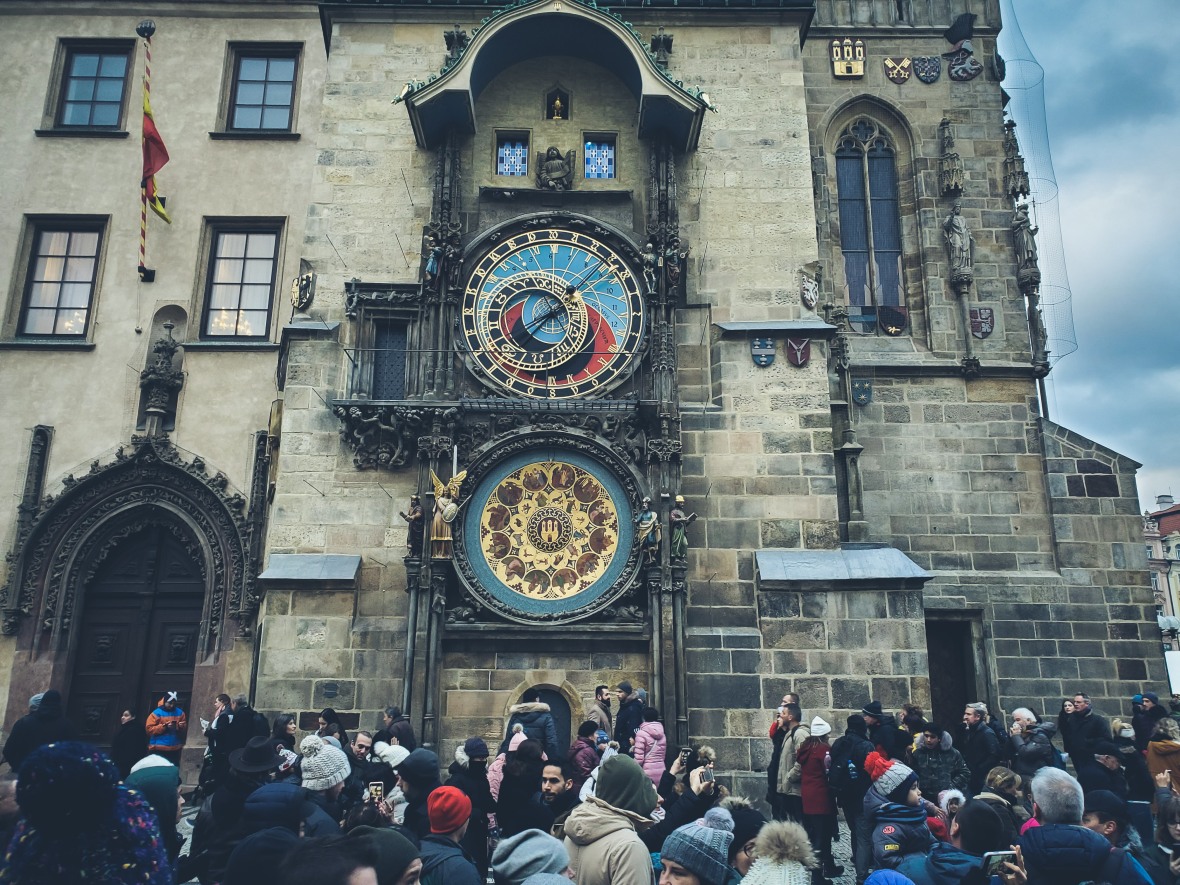 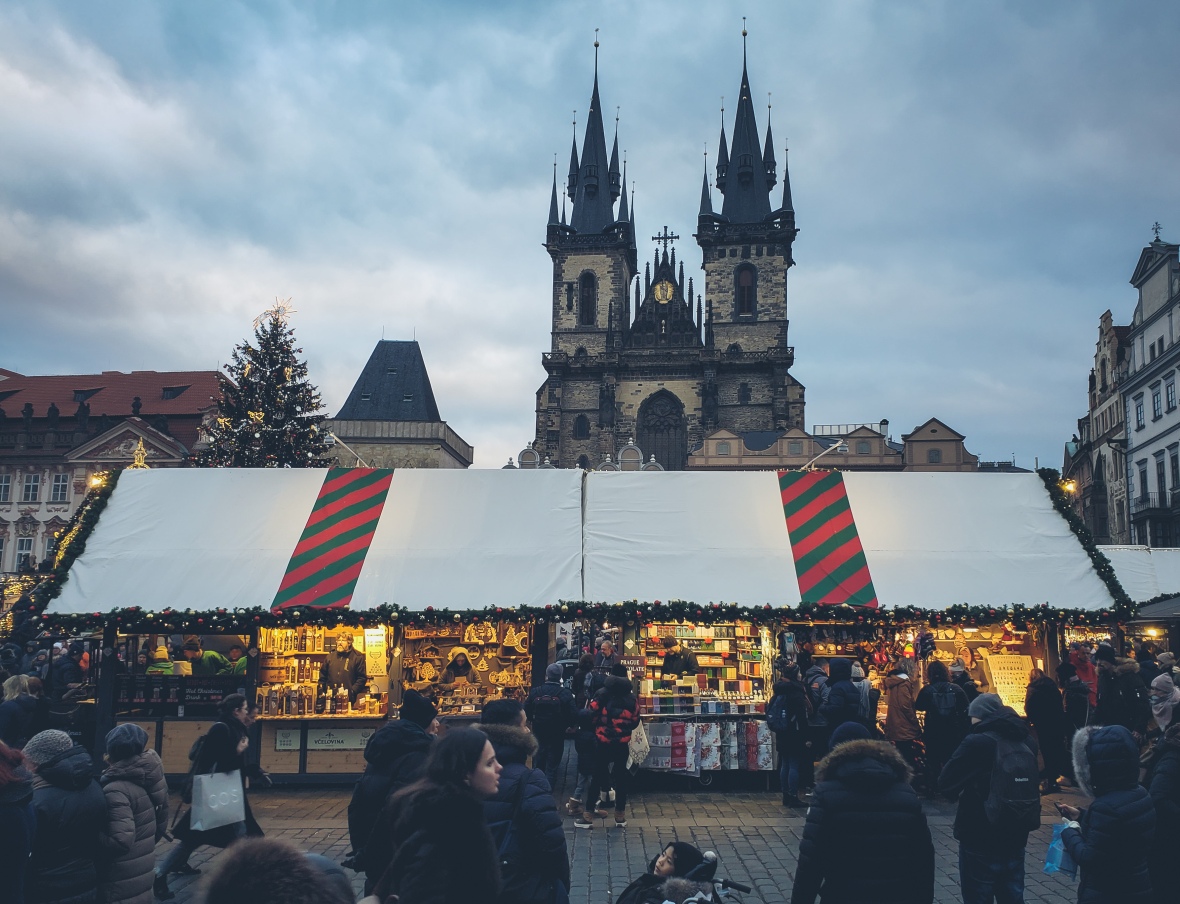 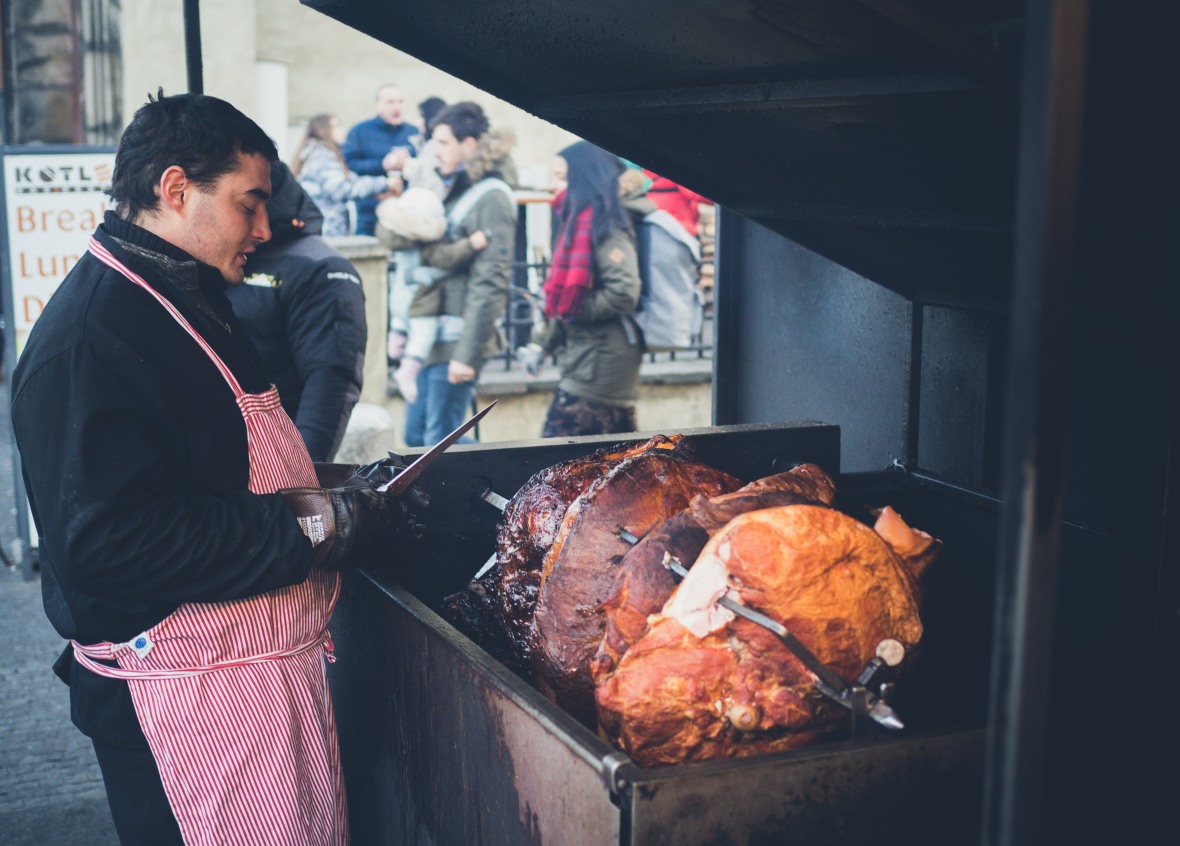 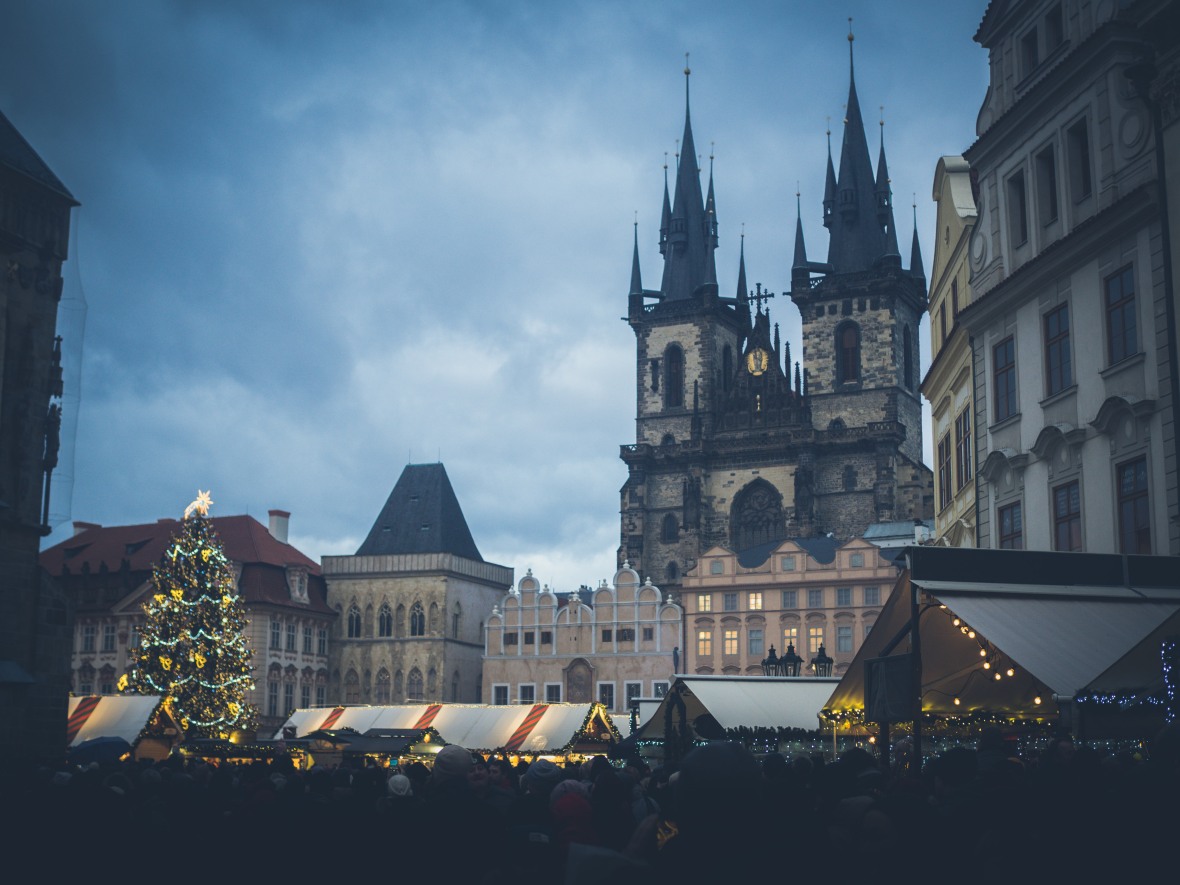 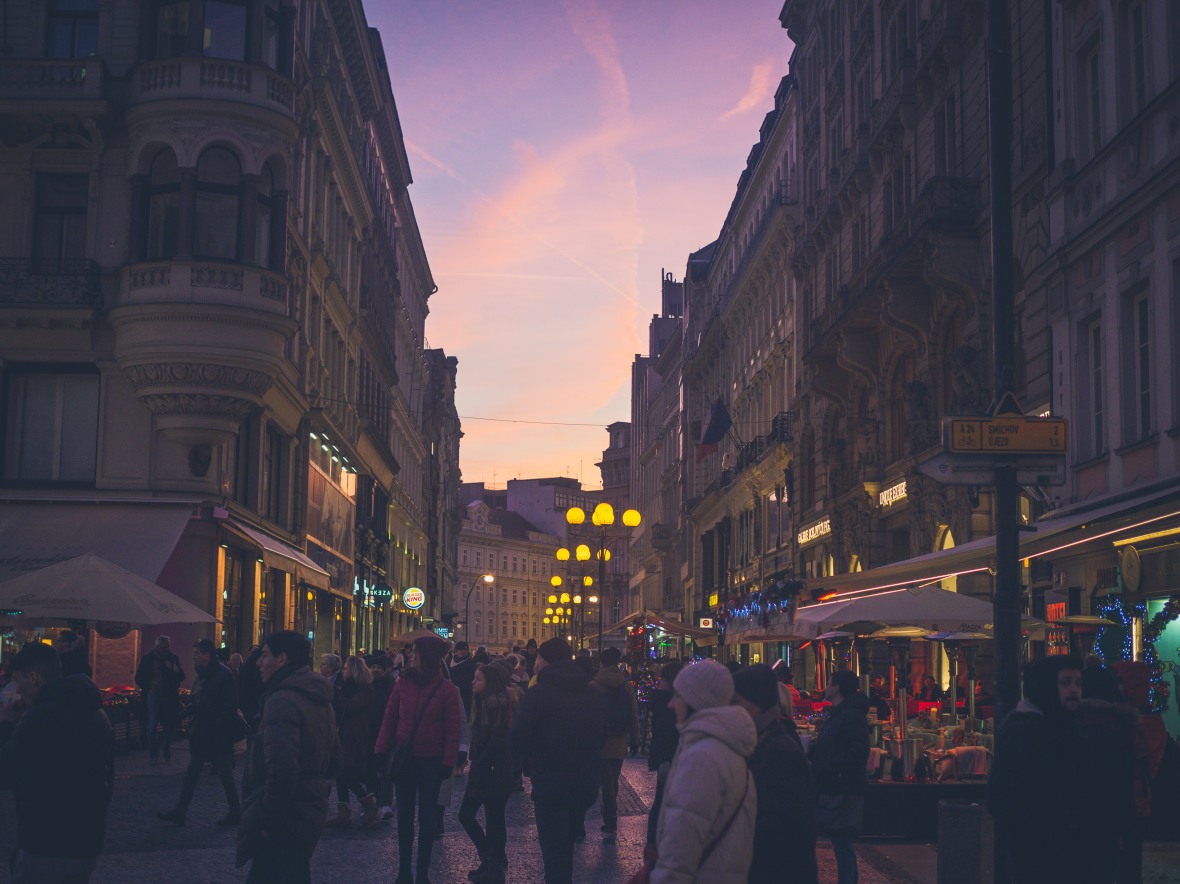 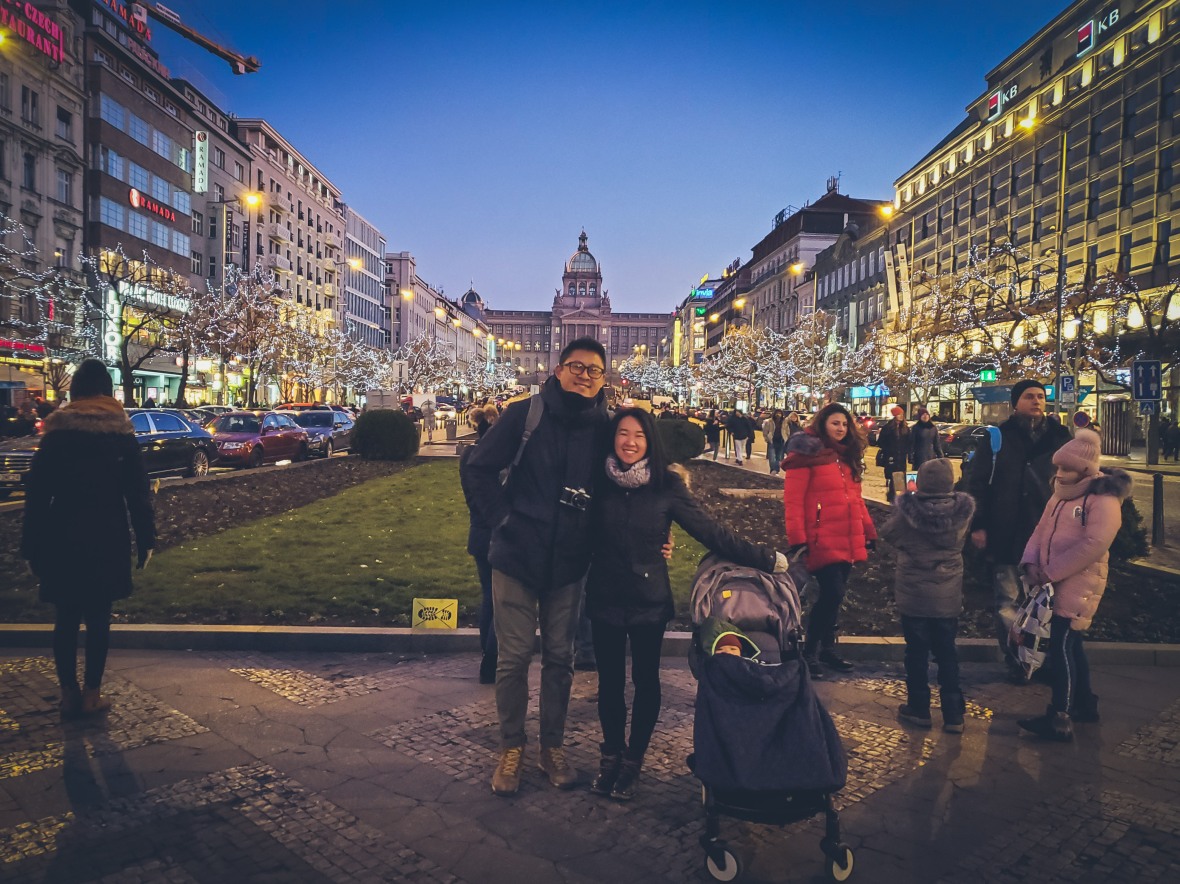 There was something magical about walking back out of the old town every night, up Wenceslas Square, and then the last few minutes back to our hotel. Miles’ schedule meant we had to be back in our room by 5:30 pm every day in order to prepare his dinner and start his bedtime routine, so we would always be heading away from the old town while everybody else was going towards it. While this prevented us from enjoying the Christmas market at night, it also gave us the opportunity to witness the happy faces of everybody on their way in, and I really was smitten by that. Maybe we were in town during a special time of the year, maybe it’s like this all the time, maybe the fading evening light made me see things that weren’t there, but I’d like to think that even in these crazy times people seek out the better things, the higher things. Or maybe it’s because we live in crazy times that we do this. We all have our happy places – sometimes it’s a place known only to ourselves, sometimes it’s a place shared with close ones. Sometimes it’s an old town square with a giant Christmas tree and shiny roasted hams spinning slowly on their spits, where people fly in from all over the world just to unironically enjoy the lights and the company of strangers in the night. Good night, Prague, indeed.