Friday was our last full day in Oman, and the plan was to drive from Nizwa back to Muscat, before flying back to Hong Kong the following evening. There are a couple of route options between the two cities: the first is a relatively straight-forward 1.5-hour drive along Highway 15, a modern, well-paved highway that follows the old trade routes connecting the interior cities with the coastal ports. The second is a smaller mountain road that takes a more winding path through the Al Hajar Mountains before connecting with Highway 13 on the other side of the range. While the modern highway holds the more immediate appeal, the mountain road passes by the village of Bilad Sayt, which is apparently a picture-perfect mountain village well worth the effort of getting there. After taking a look at the route to Bilad Sayt on Google Maps and mapping out how to get to Highway 13, we decided we’d give the mountain road a shot. I had some initial concerns about driving in the mountains, but after doing Jebel Shams and Jebel Akhdar without any trouble, I assumed it would be more or less the same. This was my mistake.

The first hour or so of the drive was a breeze – a slow climb into the hills from the plateau below, and a paved road with plenty of guardrails. As we rounded a corner and approached the apex of the climb, we saw two things: a small parking lot on our left, and a gravel road, sans guardrails, continuing on where the paved road ended at the far side of the lot. We did not anticipate this. After parking our vehicle, we walked a little bit down the gravel road to get an idea of how long this stretch of the drive would be if we decided to press ahead. The condition of the road and the steep drop-off into the valleys below were significant concerns, but from our vantage point it seemed like it flattened out after a few miles. If we drove slowly and extremely carefully, we thought, it shouldn’t be too much of a problem. So, off we went.

For the first third of the drive we followed close behind another SUV, and slow and steady was the name of the game as our dust-covered vehicles crawled together along the cliff-side road. The good news was that this section wasn’t too much trouble, although I was extra careful going around some of the twists and bends – a few times I had to ask Ashley to hop out of our car and peek around corners in order to get a better idea of how to navigate the turn. The bad news was that the flattening out never happened, and there was never a point along this drive where I felt I could relax and enjoy the scenery. We stopped a few times to take a look around, but I was very much on edge whenever I was behind the wheel. I don’t recall how long it took to eventually arrive at Bilad Sayt, but it was a lot longer than I anticipated – maybe a couple of hours from the parking lot where the paved road ended.

After all of the mountain driving, the village itself was a bit of a letdown for us. It looked beautiful from the road overlooking the terraced fields and the mud brick buildings, but we didn’t get a strong impression of the place walking through its narrow streets and alleyways. We were also in a bit of a hurry as we still had quite a bit of mountain road to get through, and, at our current rate of driving, it could be near dark by the time we emerged from the hills – and we definitely did not want to be on this road past sunset. So after maybe thirty minutes at Bilad Sayt, we went back to our parked car and continued our drive.

Here’s where things got a bit dicey. Maybe thirty minutes after we left Bilad Sayt, we came across a fork in the road. Our GPS, which had been a bit screwy for the entire trip, was telling us to take one way, while Google Maps was suggesting the other way would be faster. Having been let down by the GPS a few times already, we decided to take the Google Maps suggestion. This was a very bad idea. The road quickly got incredibly rocky and steep, and as we tried to climb up one particularly lofty hill, we actually began to slide backwards, which was terrifying. We hit a previously unseen stone in the middle of the road and our back tires slipped partway into a ditch before we came to a complete stop. After freaking out a little bit, we decided to turn around head back to the fork, which meant I had to do something like a ten-point turn to get us facing the way we came, all the while making sure our front tires didn’t go over the side of the cliff. Phew.

Once back at the fork in the road, we waved down a passing vehicle to ask if the other path led back to Muscat. The driver confirmed that it did, but he also pointed out a potentially troublesome issue before driving off – our vehicle was leaking fluid. Also, our front bumper was destroyed. Damn. We parked our car on the side of the road and sombrely pondered our options, when a convoy of jeeps came trundling up from the other direction. They pulled up to a stop beside our car, and before we knew it we were surrounded by a group of young Omani men who immediately got busy diagnosing our car problems. One of them spoke English and he provided running commentary as his friends popped our hood and rooted around in the thicket of pipes and metal where, I presume, our engine and other important car parts were located. Within minutes, they’d determined that the leakage was merely windshield wiper fluid and after giving us instructions on how to get back to the highway, they quickly said their goodbyes and drove off down the road.

Ashley and I were left a bit stunned by the whole encounter. We were clearly in over our heads driving on that road, and the constant stress of navigating it had eaten away at my sense of wellbeing all day. The last thing we expected was to meet a team of guardian angels at our lowest point. We’d read stories of other travellers experiencing the friendliness and hospitality of Omanis, but we were still pleasantly surprised to encounter it ourselves. Our spirits were immediately lifted, and thirty minutes later the road finally bottomed out into a dried out wadi, and my grip on the steering wheel loosened ever so slightly. After another thirty or so minutes, the wadi turned into a paved road, and I breathed a little easier. And then, finally, that one lane paved road merged into one of Oman’s many modern highways, and I almost cried. After the hours-long nightmare route through the Al Hajar Mountains, we were finally headed  back to Muscat. 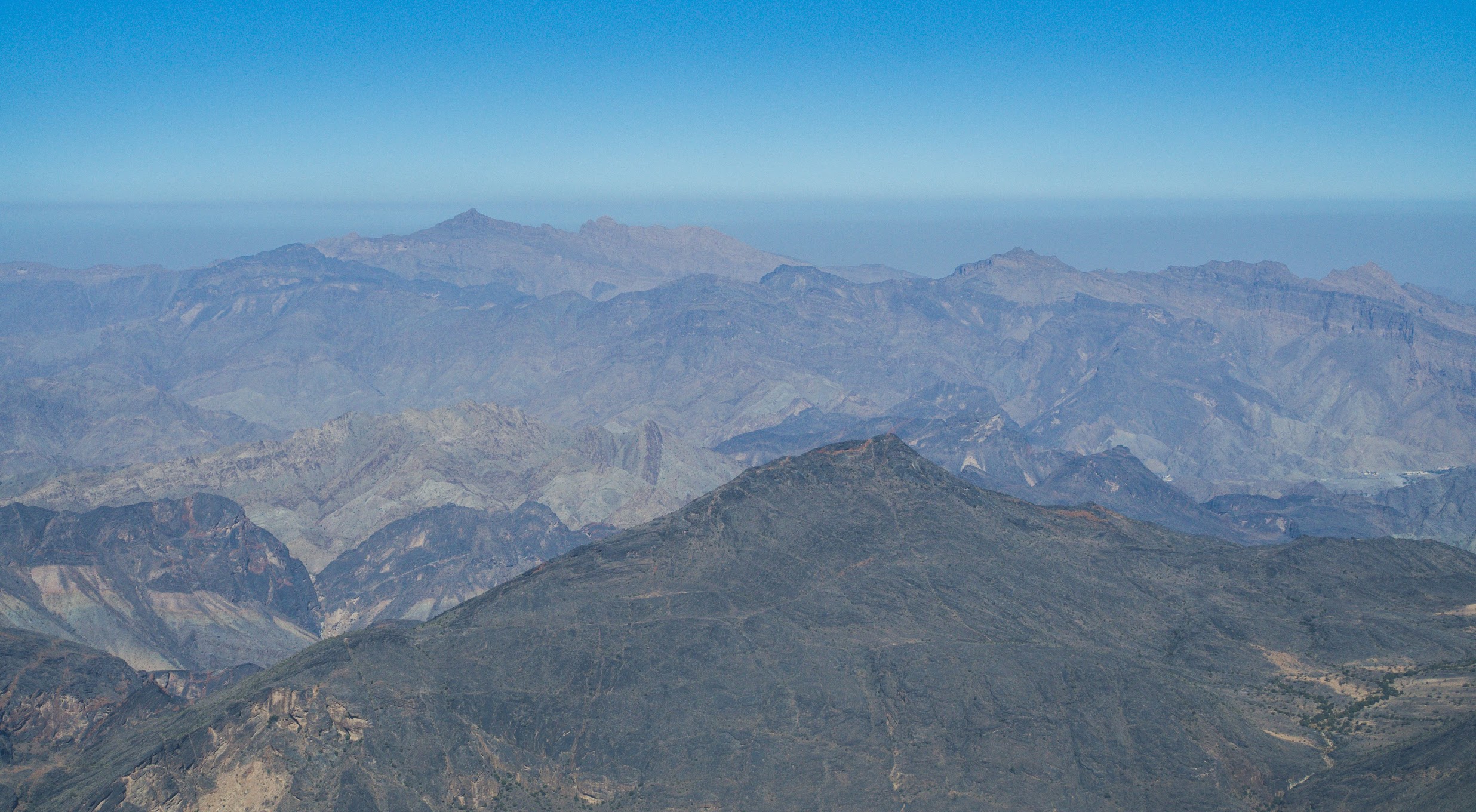 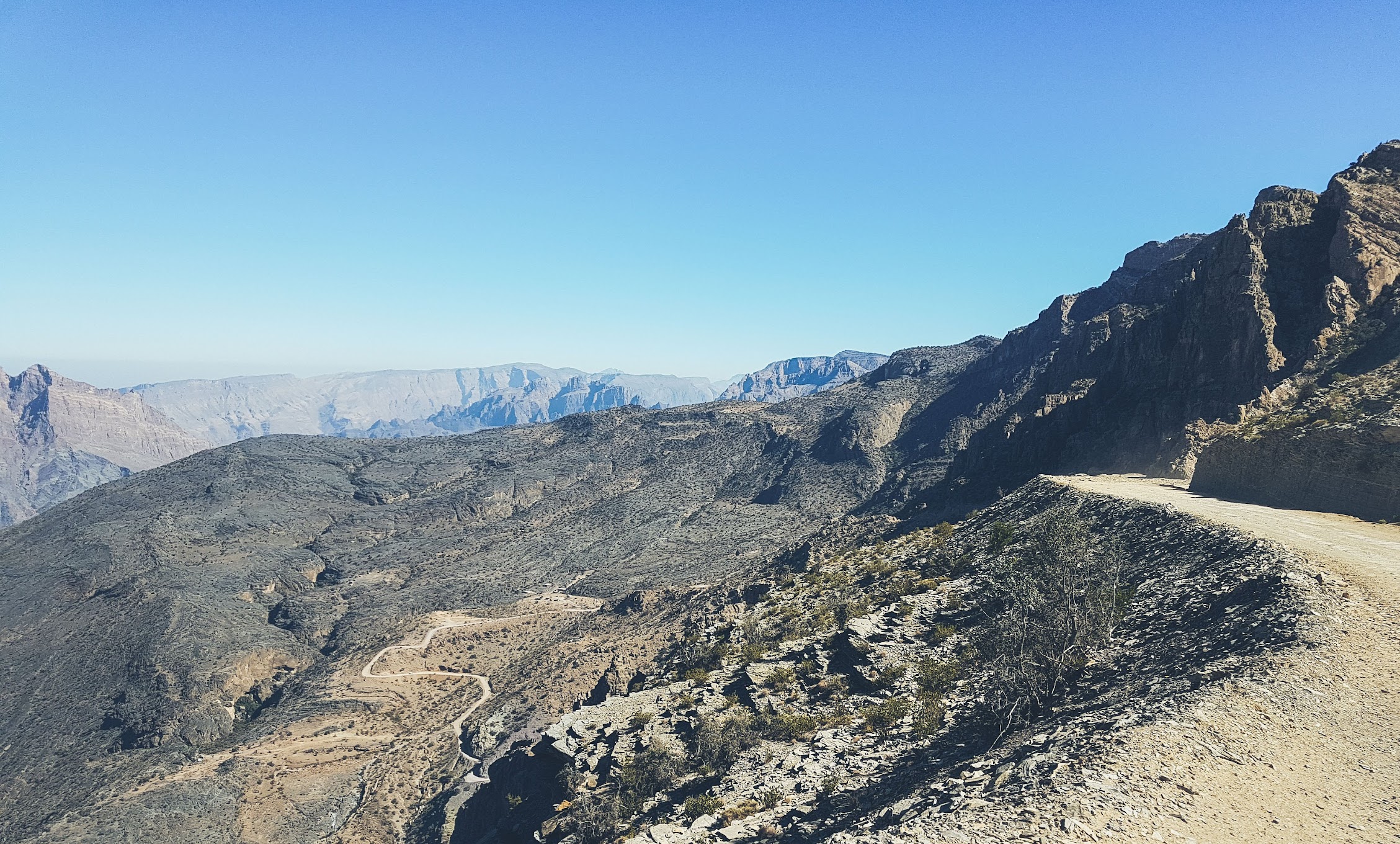 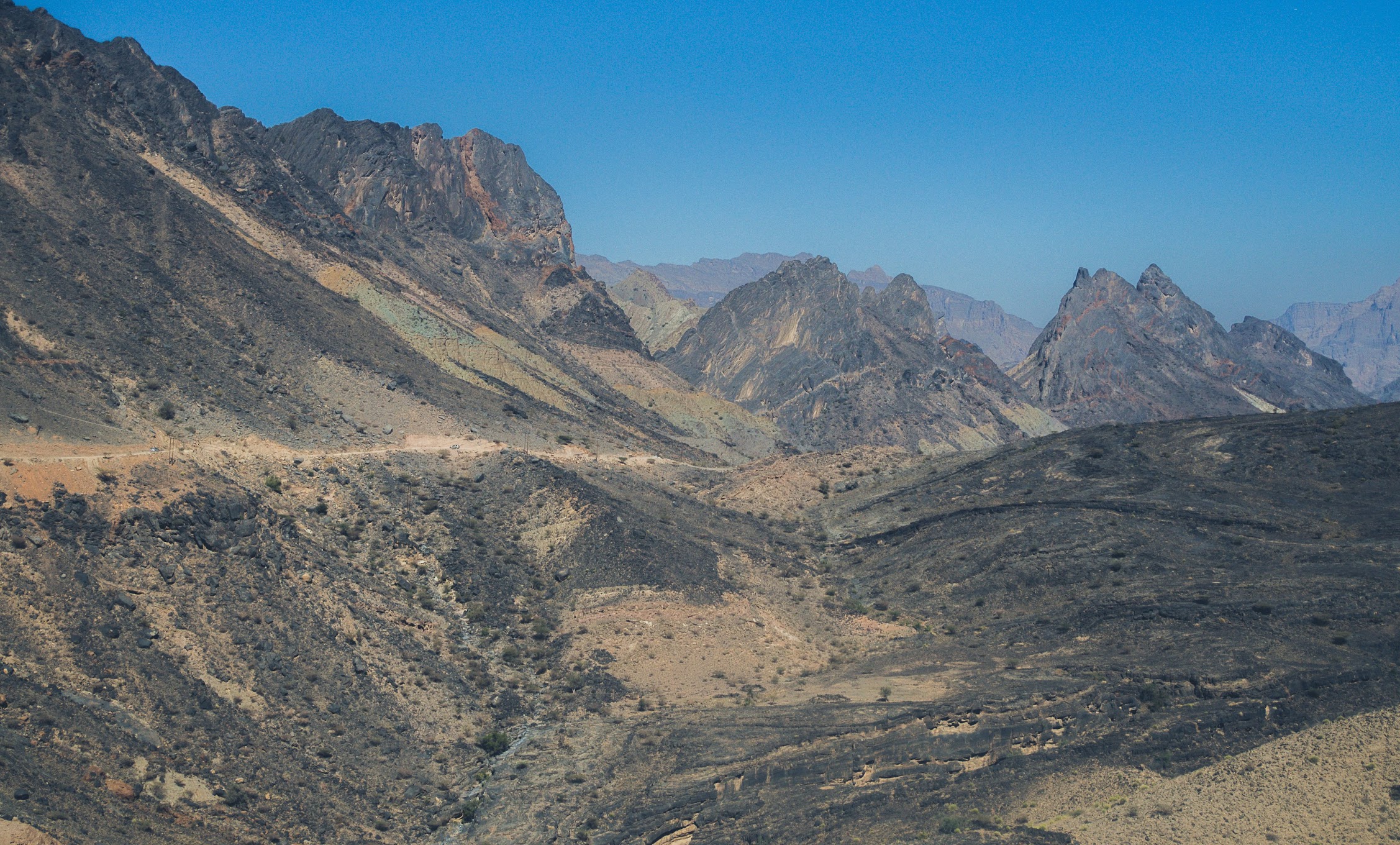 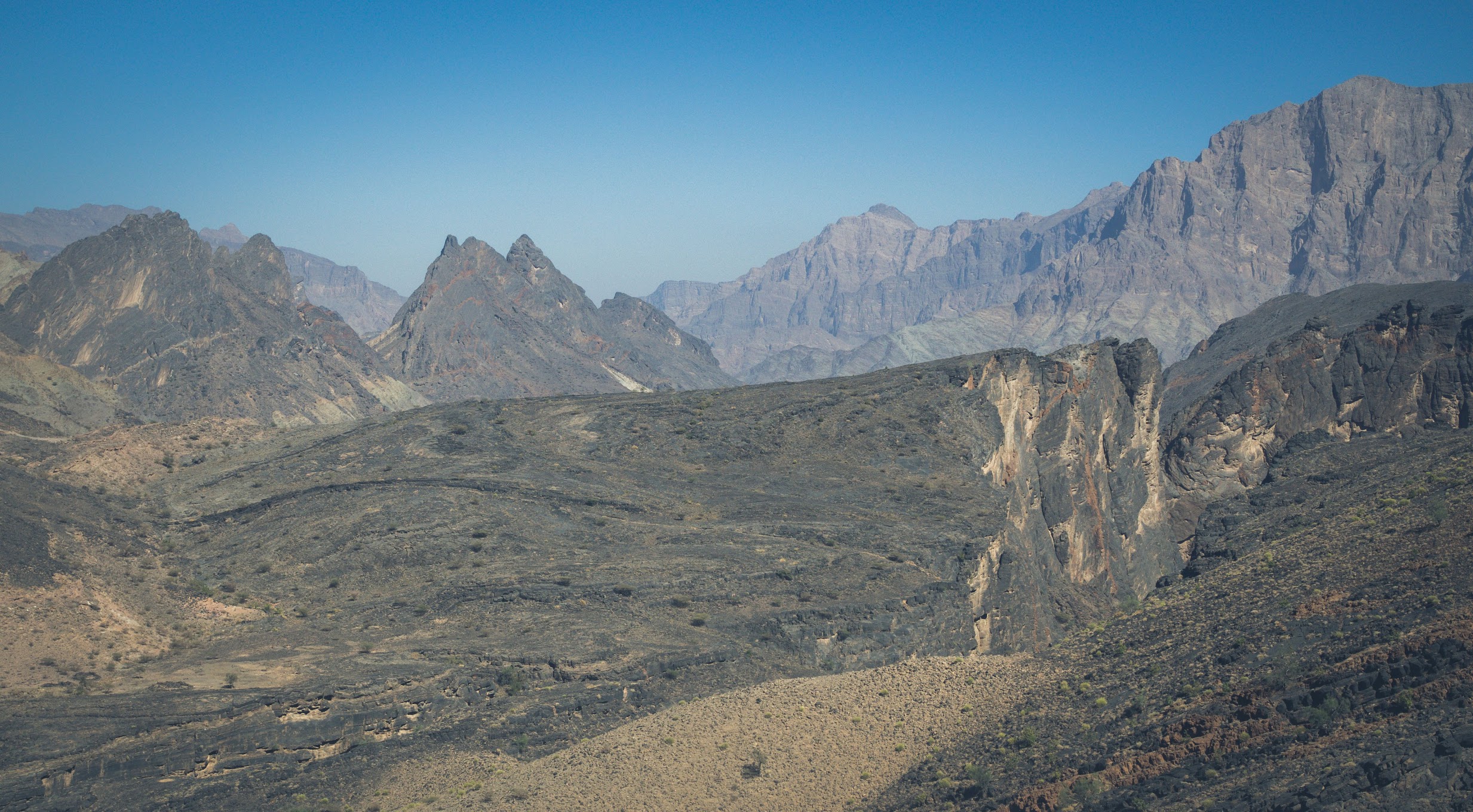 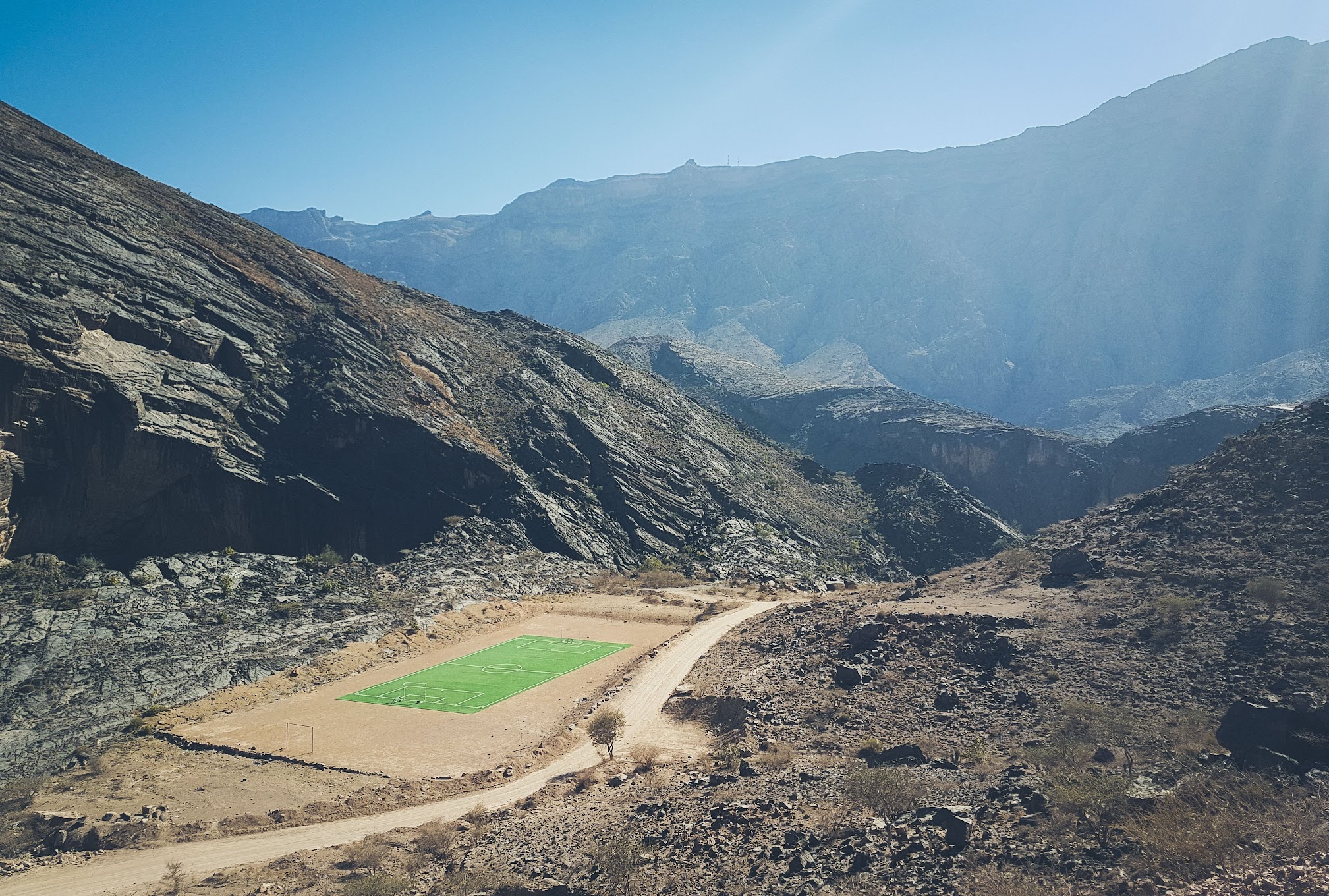 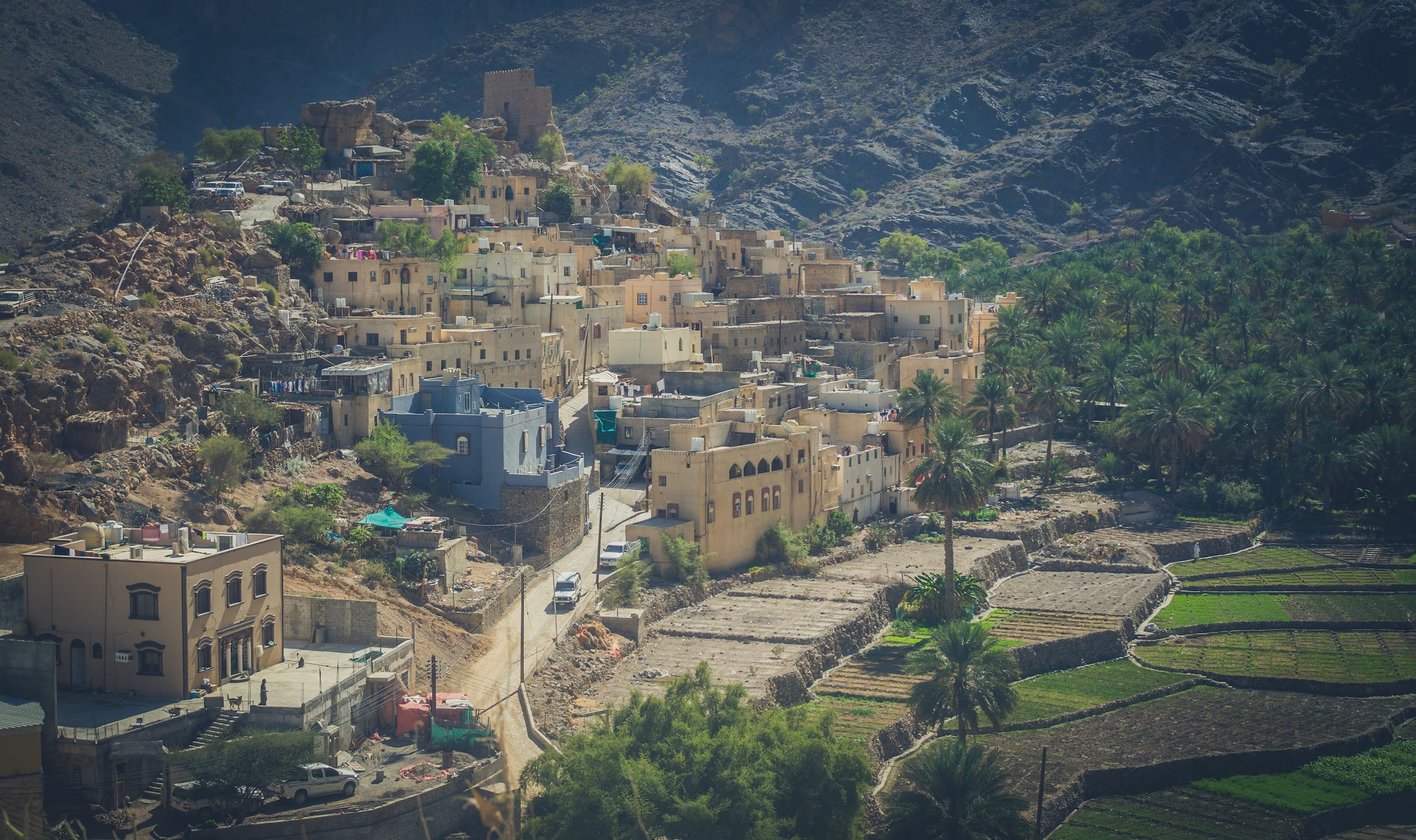 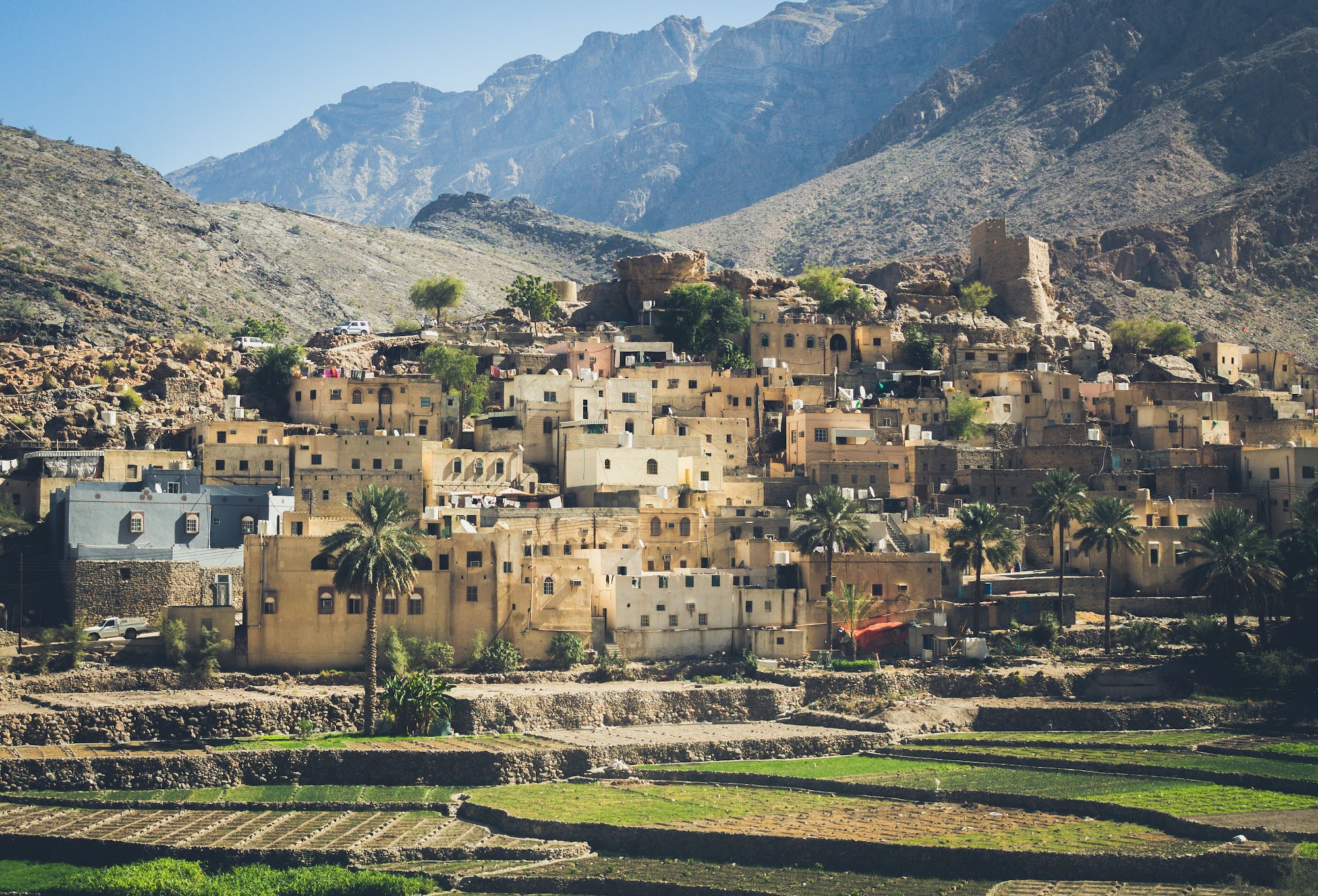 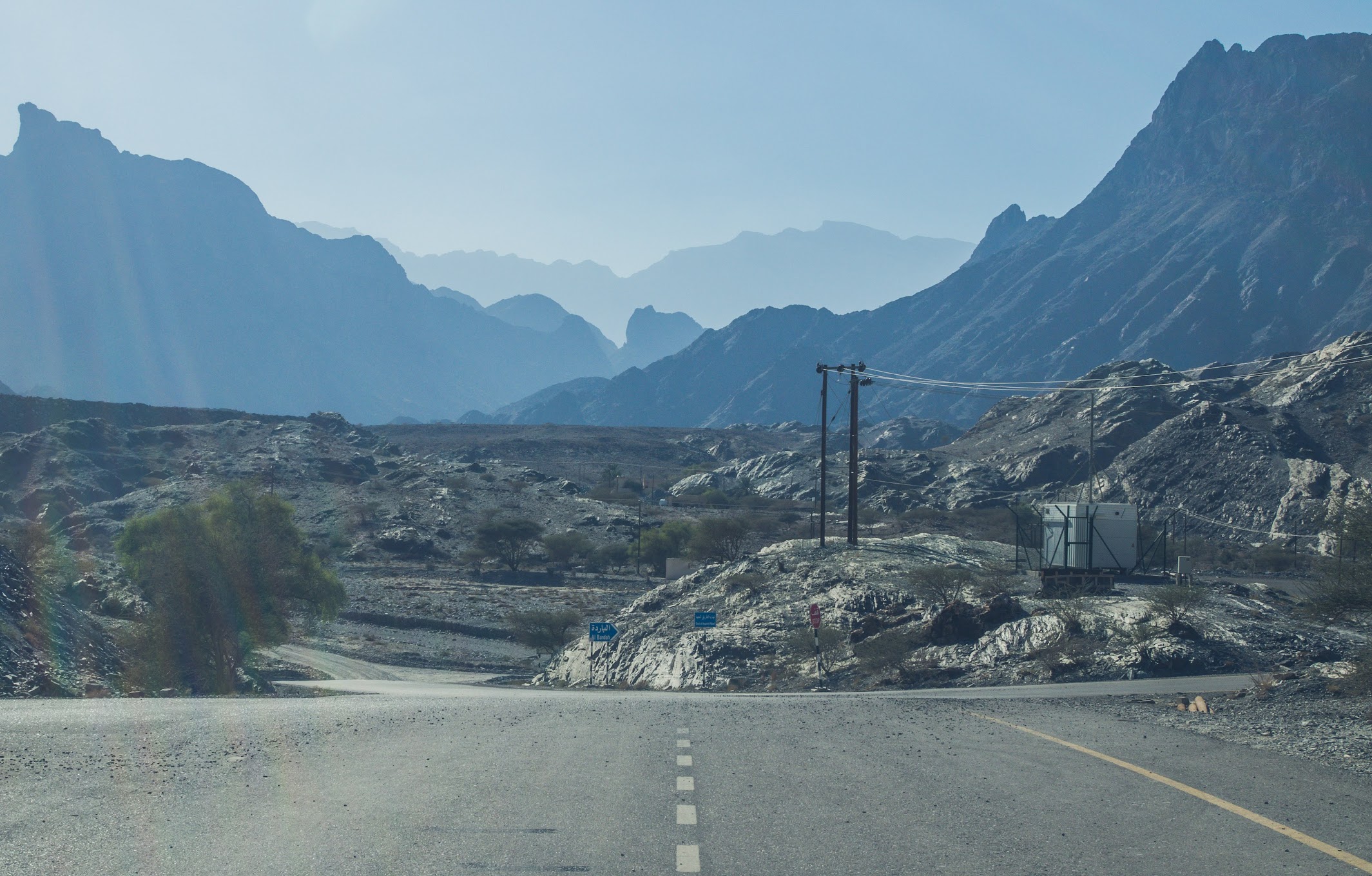 Ashley did most of the hotel research and booking for us prior to the holiday, and in a moment of incredible foresight and genius, she booked us a balcony room at the Crowne Plaza Muscat. Located on a bluff in the upmarket neighbourhood of Qurum, overlooking the popular Qurum Beach and the western districts of the capital, the cushy comforts of the Crowne Plaza drew a visceral, emotional reaction from me. The stresses of driving in Oman over the past week had built up, little by little – the unfamiliar terrain, the multiple close calls, and the long hours on getting from one destination to the next – and I was not aware of the full weight of that stress until we checked in and I stood on the balcony overlooking the city settling into its late afternoon colours. To be clear, I think Ashley and I will remember this Oman road trip for the rest of our lives, and for very positive reasons – the natural beauty, the hospitality, and the serendipitous moments of wonder that you just can’t plan for, but the driving aspect really put me to the test. I’ve never been so happy and relieved to check into a hotel. 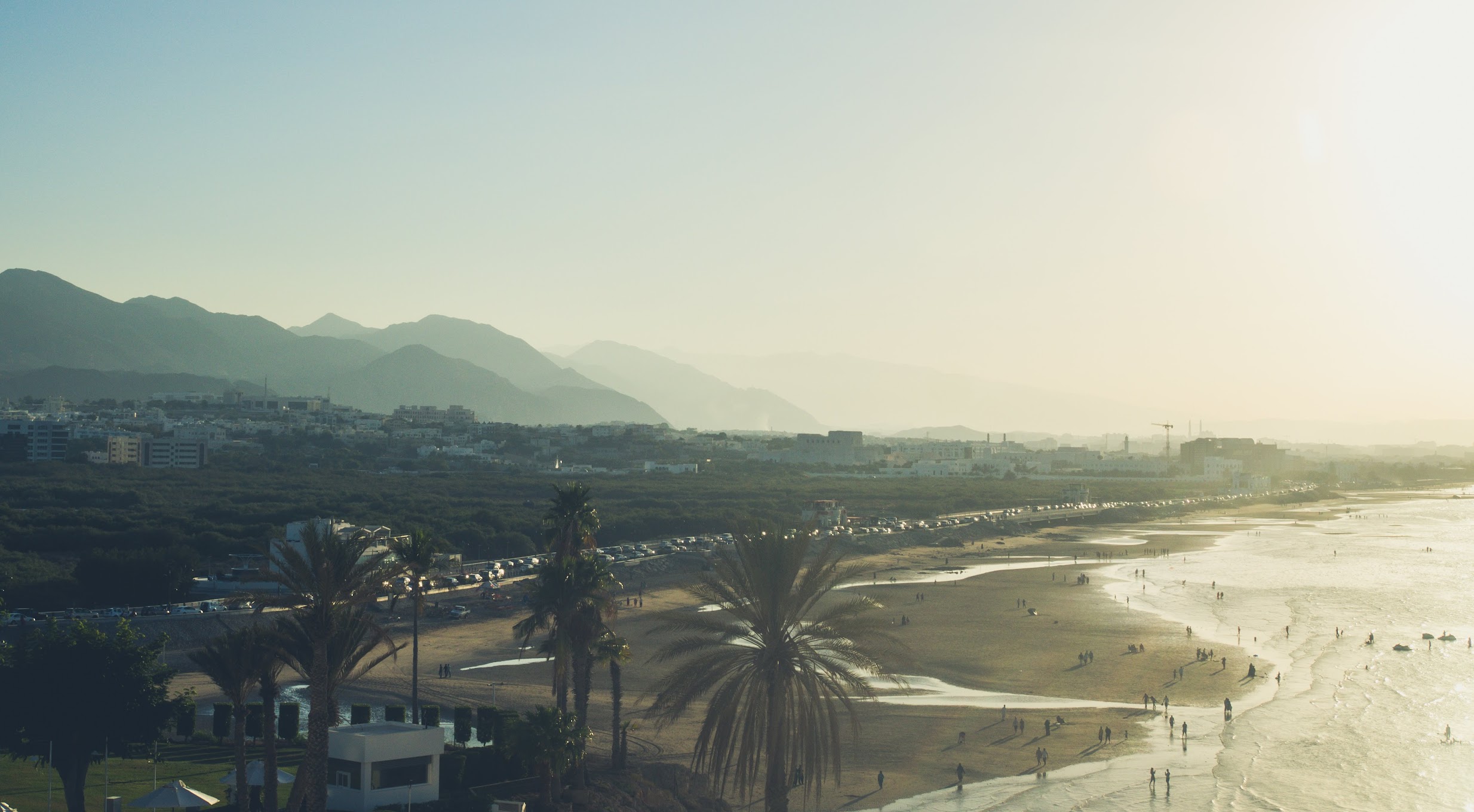 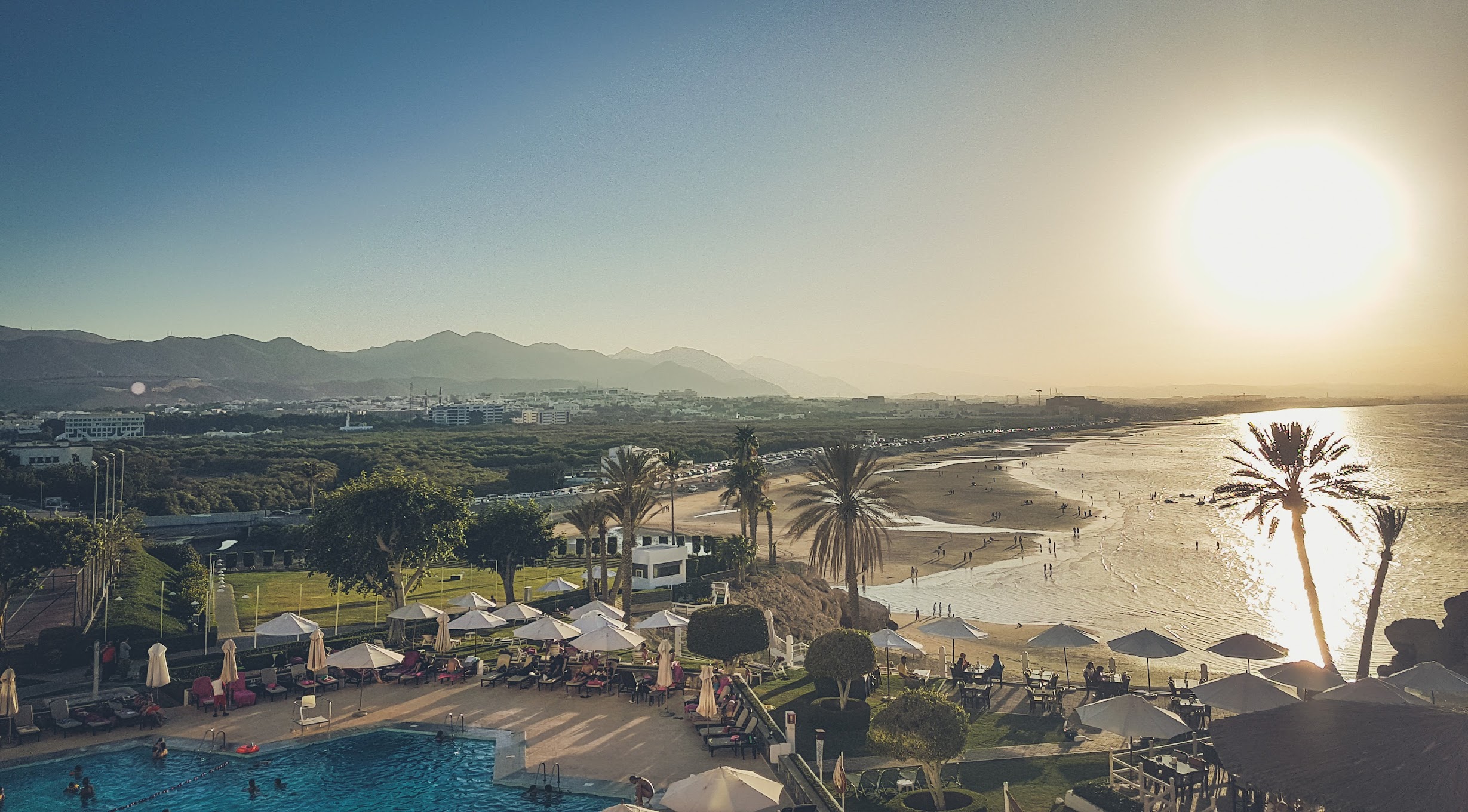 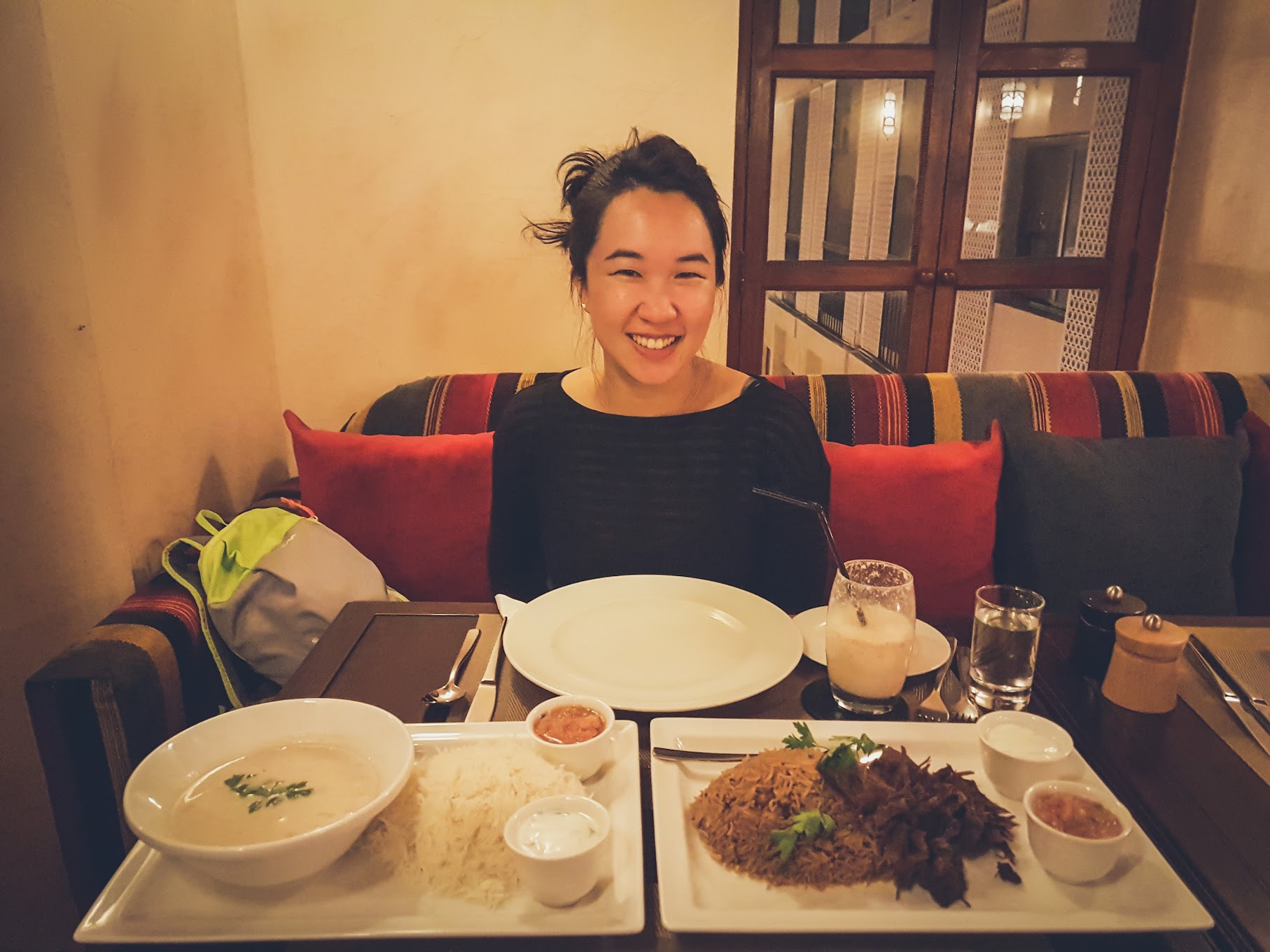 That night was our final evening in Oman, and it nearly coincided with our four-year wedding anniversary. Ashley and I booked a table at Bait Al Luban, a fantastic Omani restaurant by the Muttrah Corniche, to celebrate over traditional local cuisine. Over forkfuls of shuwa and fragrant rice, we reminisced over our travels in the last few years and marvelled at some of the sights and sounds of our recently completed road trip. Whether it was the colours of Bimmah Sinkhole, the treks through blooming wadis and canyons, the beautiful desert starkness of the Wahiba Sands, or the bustling goat market of Nizwa, we had plenty of experiences and memories here that will remain with us for a lifetime. The beauty of Oman really shone through for us throughout the entire trip, and I can not recommend this wonderful country enough. 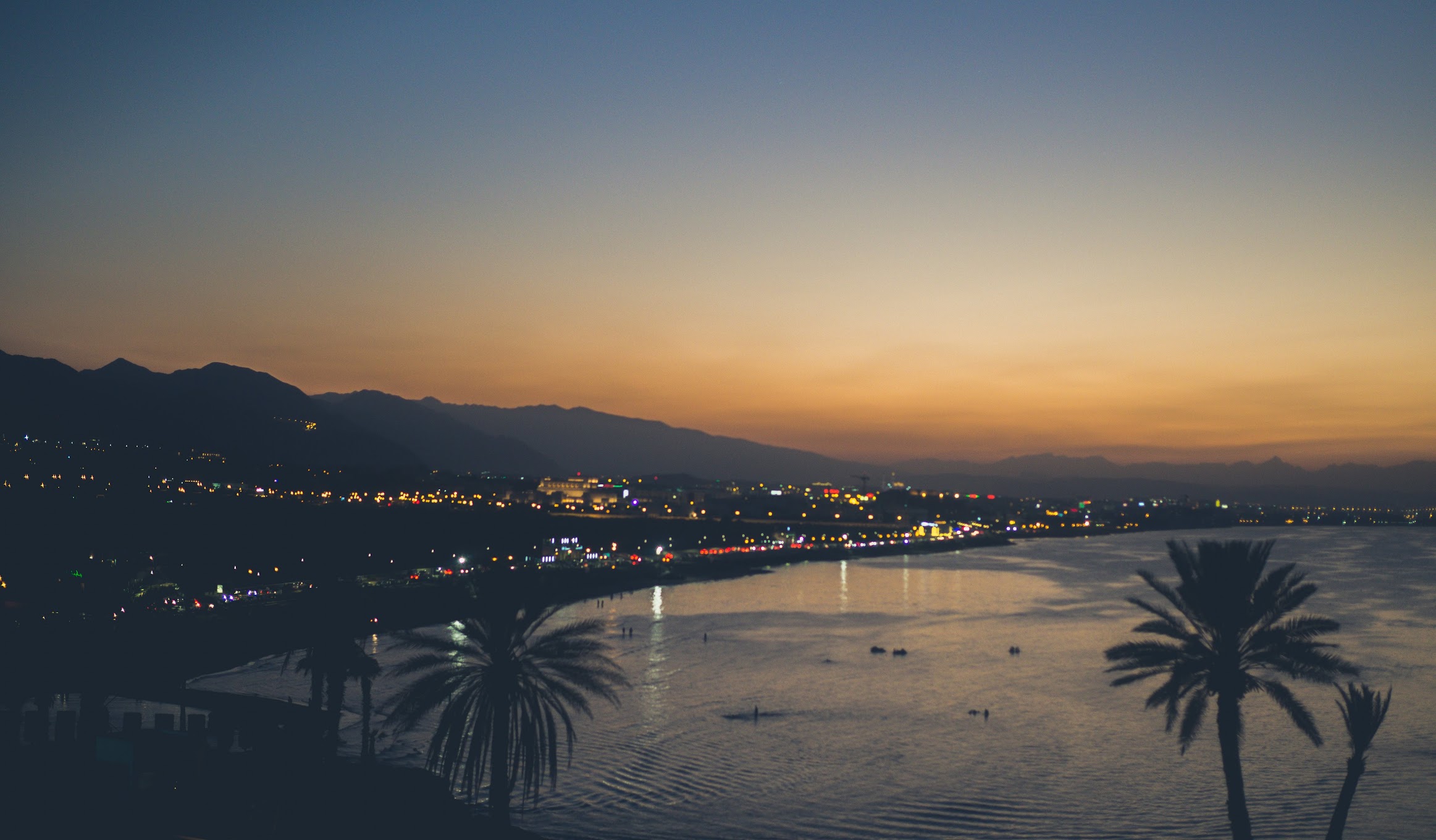